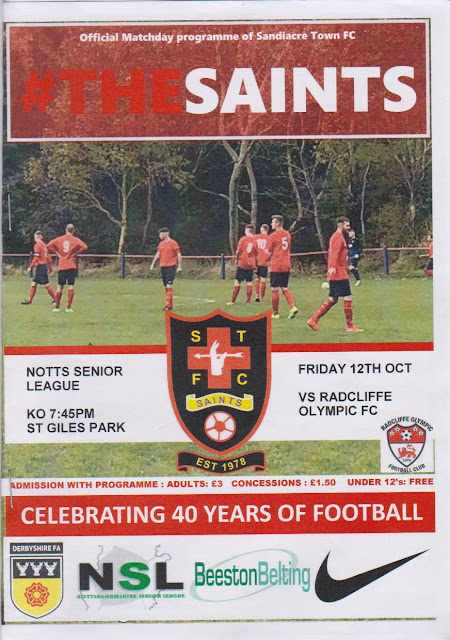 The club was established in 1978 and started out in the Central Alliance League. In 1983, they joined the Central Midlands League as founder members, starting out in its second tier. The 1985-86 season saw a 3rd place finish behind Huthwaite & Blackwell Miners Welfare, earning promotion to the Premier Division in the process. The next four seasons saw finishes ranging from 10th to 17th but they left the league in 1990 due to lack of facilities. They spent a season out of football before meging with Lace Web United of the MIdlands Regional Alliance. They were runners-up in that league in their first season back and with the required facilities now in place, they rejoined the Central Midlands League Premier Division which was now its second tier. They were champions in their first season, losing just once all season and would be promoted to the now renamed Supreme Division. Finishes ranged from 3rd in 2000 to bottom in 1997 but the club would remain in the division until 2006. Despite finishing 12th that season, they were relegated to the Premier Division, presumably due to ground grading. A single season was spent here with Sandiacre finishing bottom before leaving the league at the end of the season. Sandiacre Town then rejoined the step 8 Midland Regional Alliance Premier Division, staying there until 2016 when a runners-up spot behind Aston United saw them promoted to the step 7 Notts Senior League Premier Division. They've finished 17th and 9th in their two seasons so far although this season has seen a tricky start with them sitting just above the relegation zone at the time of my visit.

Due to their lowly league status, Sandiacre Town are yet to compete in the FA Cup. They have had a number of seasons in the FA Vase, their best progress has been the 1st Round twice. The latter of these occasions in 2003 saw them defeat Teversal & West Midlands Police prior to a 3-2 home defeat to Lincoln Moorlands Railway. They returned to the competition after a 10-year absence last season but are still waiting for a win after defeats to Sherwood Colliery and Sleaford Town in the last two seasons. Progress in local cups includes reaching the final of the CML Floodlit Cup in 2004. The club were minor national news during the 1997/98 season when supporter Nick Perkins walked 60 miles to the league game at Grimethorpe, spending a night in a tent in the middle of nowhere only to find out the match was called off due to a snowbound pitch when he was a few miles from the ground. He was also part of a trio along with another fan, Kevin Price who walked the 54 miles to West Midlands Police FC to raise funds for the club. The small town of Sandiacre has a population of just under 9,000 and is situated on the Nottinghamshire / Derbyshire border. 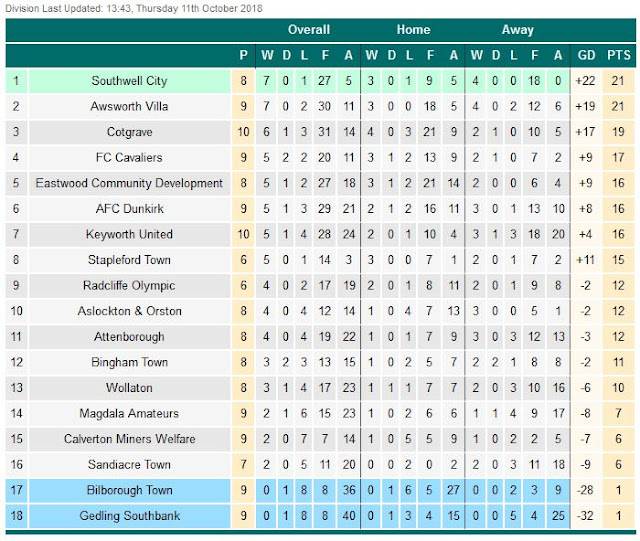 For the penultimate game of my week off, I was looking for a Friday night game> There was a healthy choice, the vast majority in Wales, but the one that fellow hopper Chris and I decided upon was Sandiacre Town v Radcliffe Olympic in the Notts Senior League. The NSL is a regular offerer of Friday night games, but it's a shame how other leagues have not caught on to the idea. The Central Midlands League used to offer matches up this way on a Friday night, but they seem to have stopped. Only a handful of leagues did it on a regular basis - aside from the Welsh League, Eastern Counties, North West Counties, Northern League and Wessex League, there were barely any games. It always appeared to be the same clubs too. A recent 'When Saturday Comes' article highlighted that games on a Friday see increased attendances of around 40% and in the games that I had been to, the increase often saw the crowd double. So it's sad to see that the vast majority of leagues have their heads stuck in the sand and are not encouraging their clubs to make some much-needed extra revenue. Obviously, travel could be an issue, but it would mean that players got to spend the whole day at their leisure on Saturday. I did my research the day before on the club, although it was easier said than done with limited information available on the internet. 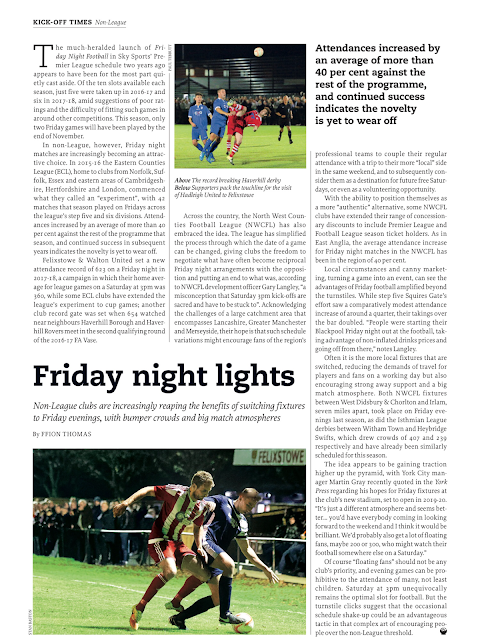 The day of the game came and I'd had a decent nights sleep, waking at 9 am. It was the last day of my time off work that I'd not be woken by an alarm. The first job was to set my alarm for 8 am tomorrow as I'm off to Sheppey United on the train. I had a bath and got dressed before walking down town. After buying a load of stuff, I met my Dad for a lift home. The afternoon was spent relaxing and listening to the BBC Three Counties Non-League show which turned out to be excellent. After getting my things together, I left home at 3.15. There were plenty of dawdling drivers, so it took longer than usual with me getting to him at 4.30. There were expected delays of 40 minutes, though it turned out to be only half an hour with us getting to our destination at 6.10. We walked to a nearby Wetherspoons called The Admiral Sir John Borlaise Warren where I had a spicy meat pizza and a pint of Marcle Hill cider. From there we made our way back to the ground, arriving around 7.15. 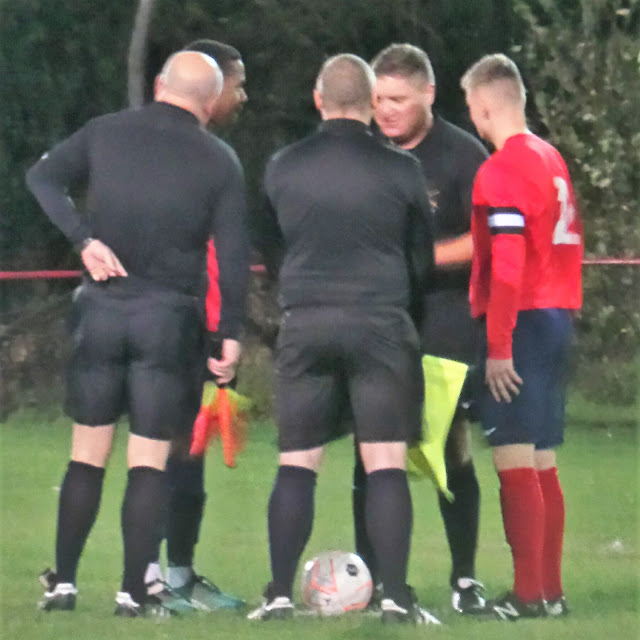 The game kicked off in windy conditions at 7.30 with entry a nominal £3 which included a programme. Radcliffe Olympic took the lead after 15 minutes when a cross was put in and sloppy marking led to a visiting player poking the ball home. The hosts had a good amount of possession, but they had very little end product at this point in the game. It was still 1-0 at the break and Radcliffe looked decent value for their lead. The last was doubled ten minutes into the second half when the home defence failed to deal with a high ball and the Radcliffe number 11 finished for what was his second goal of the game according to a fellow spectator. Again the hosts were trying to get back into it, but like one of the lights on our side, they were failing. Luckily, it was fine for the game to continue and like my game on Wednesday a few miles away at Graham Street Prims, it had an unexpected twist in the tail. The comeback started on 78 minutes, a free kick was awarded and although it hit the bar, Adam Garton headed the rebound home. A couple of minutes later a penalty was awarded for a foul just inside the area and Jordan Smith stepped up and successfully converted the spot kick. The hosts were playing like a team possessed by now and they had a shot cleared off the line around five minutes from time. The turnaround was complete in the 90th minute when an excellent delivery from a corner was headed home at the far post to complete an amazing turnaround that had seemed impossible 15 minutes earlier.

Three goals in the last 12 minutes allow Sandiacre Town to complete an amazing comeback
A post shared by Russell Cox (@russ_wwfc) on Oct 12, 2018 at 6:34pm PDT


Once again, just like on Wednesday, I'd seen a game that had a complete twist at the end. It had been a good game for the 70 or so fans that had turned up and certainly better entertainment than the England game which ended 0-0 in an empty stadium in Croatia. The game was being played behind closed doors after a small minority of Croatia fans displayed a swastika, but for me, it was yet another pointless international. Far too many games get played and it takes away from what should be a special occasion when the number of internationals is in double figures for the season. We stopped at ASDA in Long Eaton before we headed home to get a drink and left the area at 10. The journey home started a bit slowly due to roadworks on the M1 but we soon got going. There was a reroute with us having to get off a junction early due to a collision between a car and a lorry. Google Maps was estimation a 1 hour 15-minute delay and it would certainly appear that way with an 8-mile tailback reported later on. Hopefully, no innocent victims were seriously hurt and although I had a minor delay, I dropped Chris off at 11.30. The Two Mikes on TalkSPORT had made the journey pass a bit quicker and I got home myself an hour later with a slight delay on the M1 when I got back on, thanks to all the traffic being released after the accident was cleared. I carried on typing my blog and sorting photos as I watched TV before going to bed at 2 am. 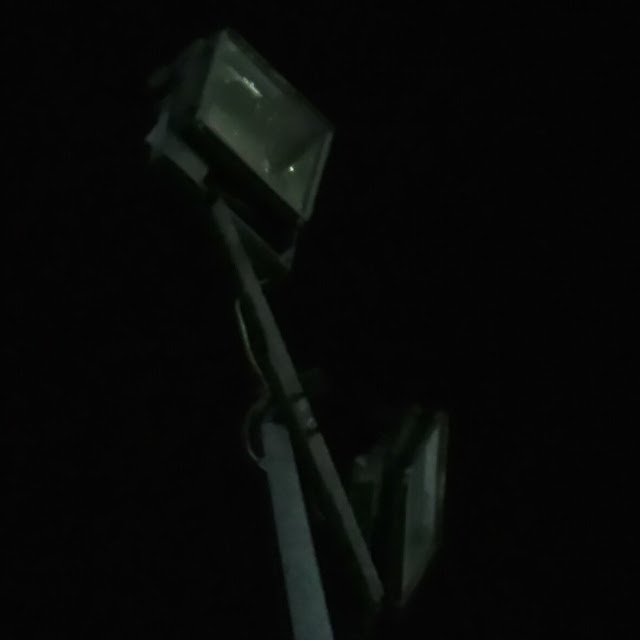 ST GILES PARK is one of the better grounds at step 7. There's a large area of cover behind one goal which could probably hold a few hundred people, though it's all standing and no seating. Two sides of the ground have hard standing and I'd imagine not a lot of work would have to be done to make it suitable for a higher level. There's a decent bar at the ground and this also has sports TV and hot food at certain times. In addition, there are a couple of pubs nearby, the Blue Bell advertises real ales and ciders. The town of Stapleford is just over a mile away, this has a large range of takeaways and pubs, including a very decent Wetherspoons. 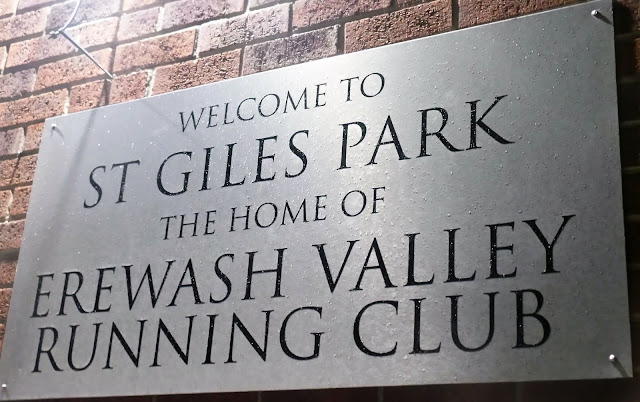 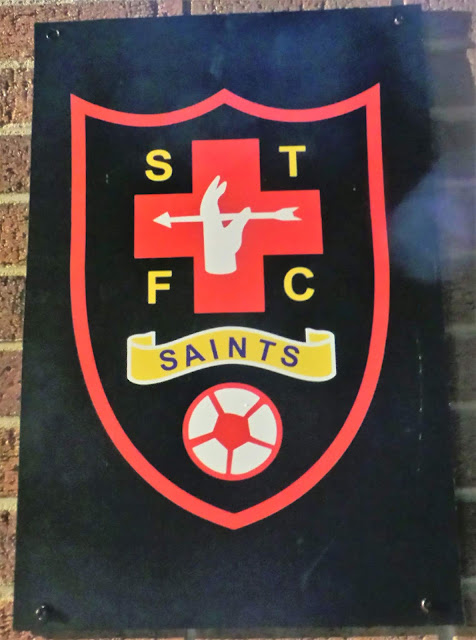 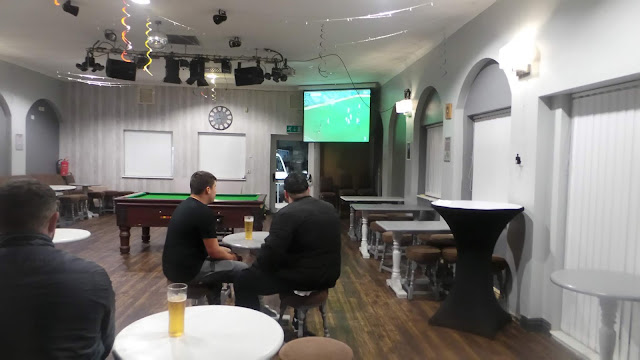 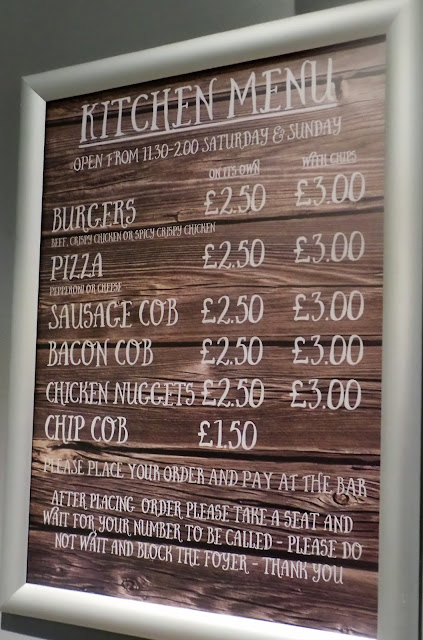 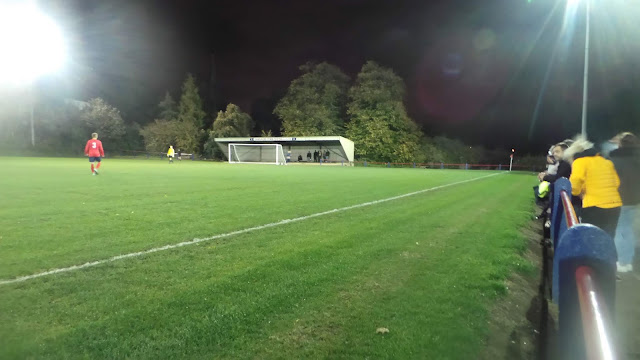 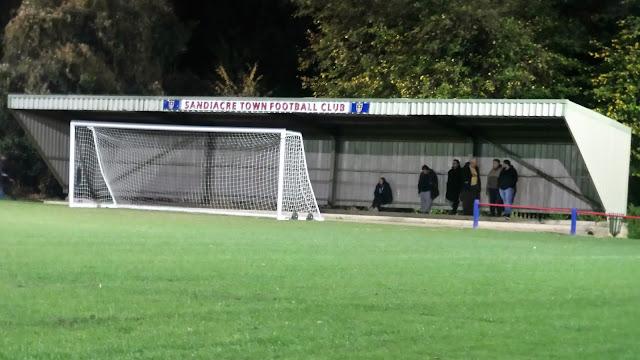 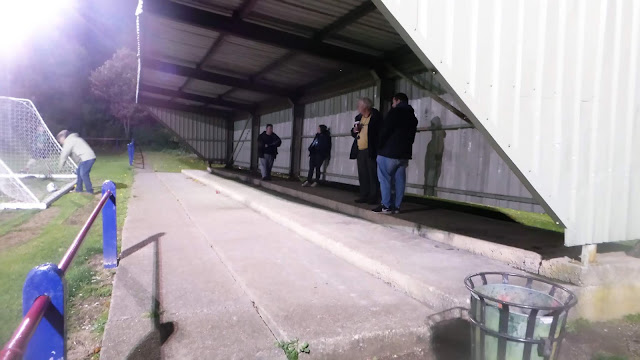 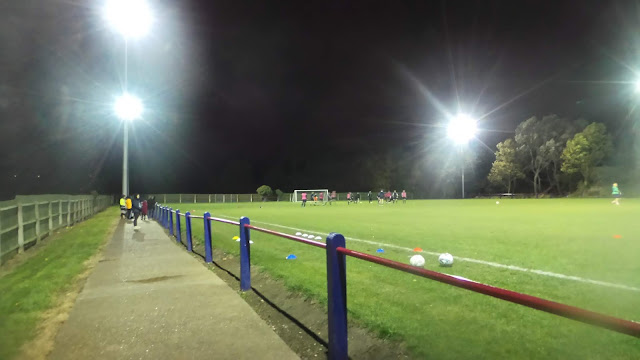 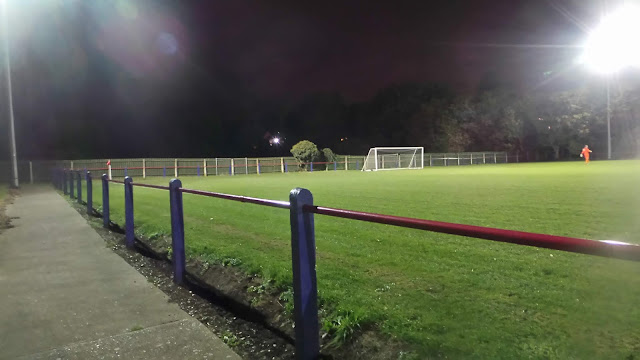 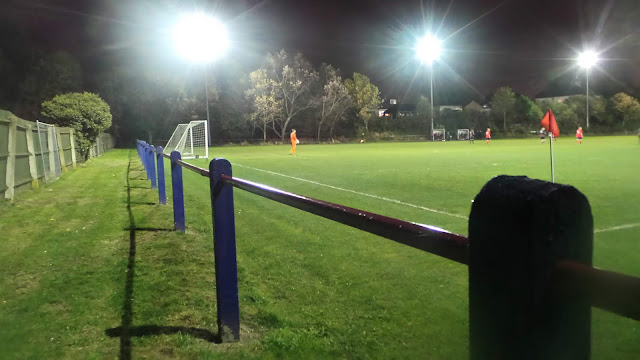 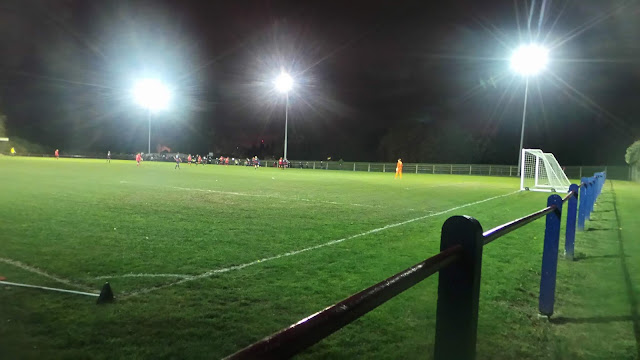 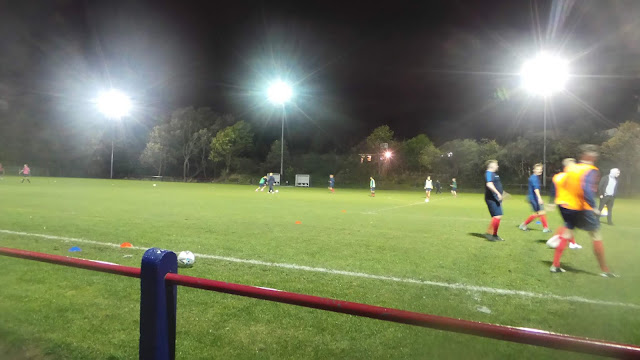