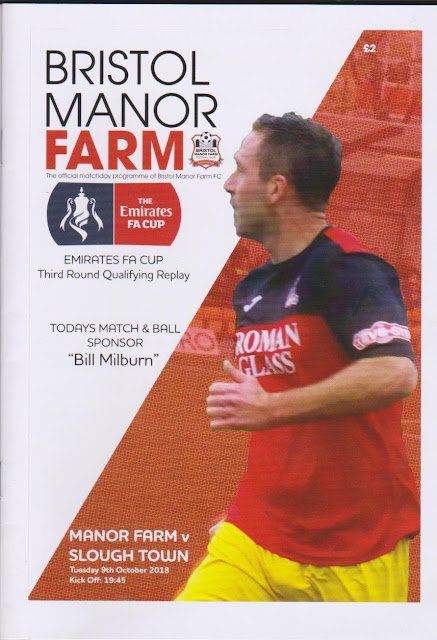 The club was formed in 1960 and spent their early years playing in local leagues including sitting out the 1961/62 season. They've played at The Creek, former home of the Port of Bristol Authority Sports & Social club since 1967 which allowed them to join the Somerset Senior League. After rapidly progressing through its divisions, they made the step up to the Western League in 1977.  Starting in Division 1, a series of good finishes culminated in them finishing as champions in 1983, winning promotion to the Premier Division in the process. Bristol Manor Farm would remain here until 2002, finishing as high as 5th in 1987 but a poor season in 2001/02 saw them finish second-bottom and suffer relegation back to Division 1. The following season saw their worst finish since joining the Western League - 11th - but they'd bounce back in 2003/04, finishing 3rd behind Hallen & Bitton to seal promotion back to the Premier Division. Though they came close to relegation in the 2012/13 season, finishing 18th, the club would improve rapidly to finish as runners-up the following year. After a series of near misses, Bristol Manor Farm would finish as champions in 2016/17. Last season saw an excellent 9th place finish following their promotion to Southern League D1 South & West. This season sees them sitting in 16th place in the renamed Southern D1 South, though they do have games in hand owing to cup commitments. 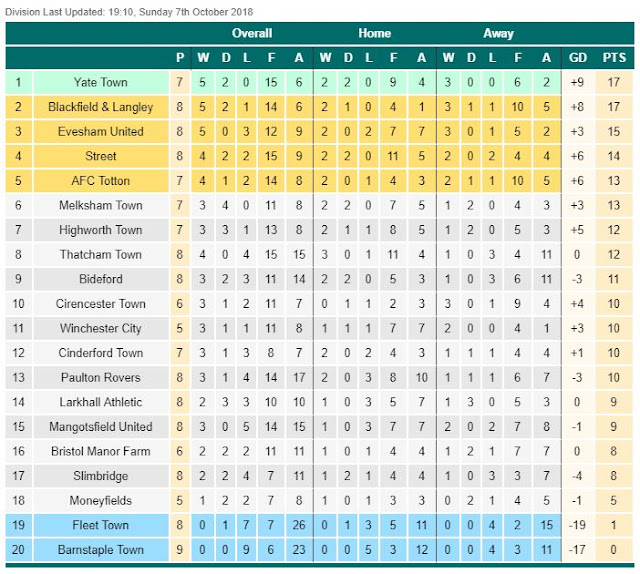 Bristol Manor Farm are currently enjoying their best-ever run in the FA Cup, having only got as far as the 2nd Qualifying Round previously. They beat Bideford in the Preliminary Round, though they needed a replay after drawing 2-2 in Devon, getting the job done with a 4-2 victory at home. A trip to Chipping Sodbury Town was next up in the 1st Qualifying Round, but a routine 2-0 victory was gained to allow them to progress. The 2nd Qualifying Round brought a real challenge with a game against Basingstoke Town who sat a division higher. It was a test they passed with flying colours, winning 5-2. This brought about Saturday's game, an even tougher test with a trip to Slough Town who sat 5th in the Conference South. Owen Howe was the hero, grabbing a brace to twice equalise and earn tonight's replay. There have been no runs of note in the FA Trophy but Bristol Manor Farm did get to the FA Vase Quarter Final in 2016. That season they beat Bridport, Lymington Town, Hengrove Athletic, Moneyfields & Sunderland RCA before losing at Morpeth Town. Local honours include the  Gloucestershire FA Trophy on four occasions and the Western League Cup in 2012. The club's biggest win of 10-0 came against Devizes Town in a 2016 Les Phillips Cup game. The record defeat of 11-0 came in a 2017 pre-season friendly against Bristol City, although it did produce their record attendance of 1,417.

Both fellow hopper Anwar and I had been keen to do Bristol Manor Farm for some time, what with it being one of the higher level grounds that I still needed to do. It was a ground that I'd visited to get pictures of when watching Wycombe down at Bristol Rovers and it had looked a good setup. Along with my love of the FA Cup, this game being a 3rd Qualifying Round Replay against Slough Town which was being billed as 'the biggest game in Bristol Manor Farm's history' it was inevitable that it would be my Tuesday game. I'd spent time on two days of the weekend down in the area thanks to the Western League Hop, so the M4 was a well-worn path in recent days for me. The night before I did a whole load of research into the clubs history, as well as planning things like potential traffic delays and places for dinner. I learned of the FA Cup draw for the winners of this tie and learned that they would face a tricky tie at Eastbourne Borough in the 4th Round. Sadly, after doing a game in every round so far, it looks as if I will have to sit out this one, what with Wycombe having home games on both the Saturday and the following Tuesday. 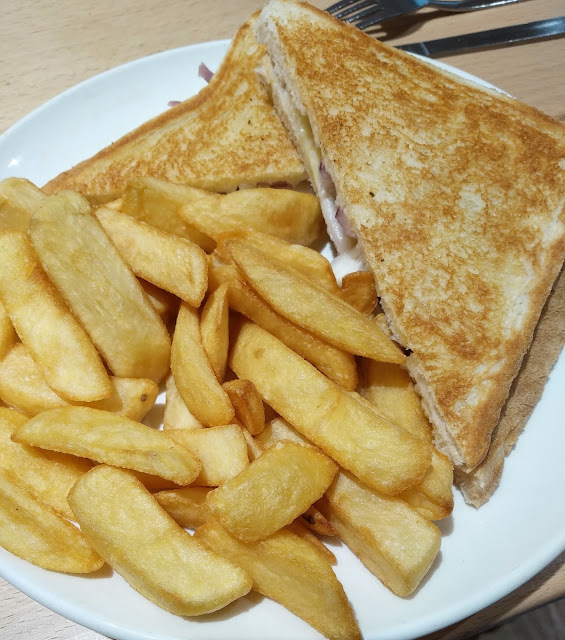 The day of the game came and I walked down town before meeting my Dad for a lift home. The afternoon was spent researching some upcoming games including tomorrows game at Graham Street Prims. I left home at 3.30, meeting Anwar in Aylesbury at 4. We were soon on our way but the roads were frustrating. Firstly we were sent a cross-country route to Oxford thanks to traffic on the main route. Then on the A34 someone had decided to take out a slow moving wide load in the middle of the rush hour, meaning that a whole load of drivers had to travel at a reduced speed. It was only when we got on the M4 that we got going. We got to Morrisons at 6.20 after 30 minutes delay. I’d been hoping for a Thai Curry in their cafe like I’d had before but they’d changed their menu. Instead, I had a toasted cheese and onion sarnie with chips and a bottle of Ribena for £5.60. After a quick look around the store, we left, taking the 5-mile journey to the ground and arriving at 7.15. The car park was busy, but there were still places available so I grabbed one. From there I headed to the turnstiles, paying £8 for entry and £2 for a programme. I got some pictures of the ground before taking a spot on the far side along with Anwar and a friendly Bristol City fan who we talked to through the night and who used to live back near us. 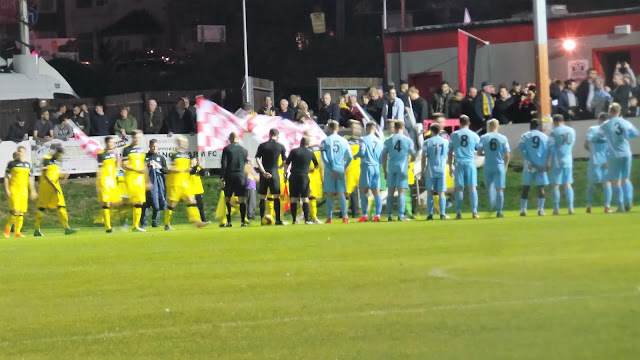 As for the game, Bristol Manor Farm were wearing a yellow kit rather than the red one that I was expecting. This meant that Slough had to use their change strip of light blue. The pitch had a noticeable slope and for the first half, the hosts had the advantage of this, kicking downhill. They started brightly, but soon the visitors took control. They opened the scoring on 15 minutes thanks to a low long-range shot from a George Wells. Home keeper Ben John appeared to get a hand to it, but couldn’t prevent it going in. Slough continued to press, hitting the bar with Bristol Manor Farm relying on chances on the break. The visitors doubled their lead 20 minutes later and it was a great shot right into the top right-hand corner by Warren Harris to make it 2-0. The hosts had a good spell after this and it was only a clearance off of the line following a goalmouth scramble that prevented them from reducing the arrears. Poor defending on 54 minutes allowed Matty Stevens to get away from the defence and with home keeper Ben John left exposed it was a fairly simple finish for 3-0. By now, the game was over for a contest and the visitors completed the scoring on 83 minutes through former Grimsby Town winger Louie Soares whose close-range header at the back post made it 4-0. 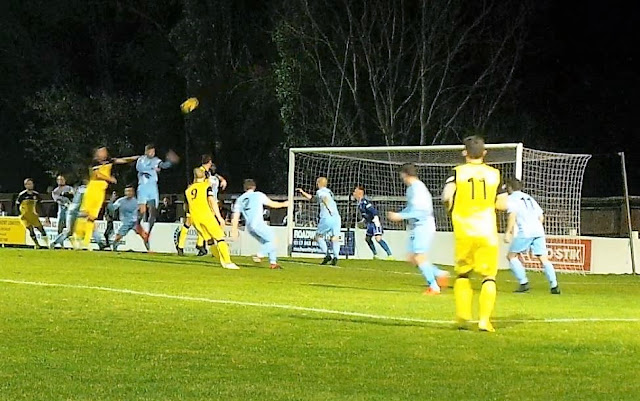 Though Bristol Manor Farm had been taught a less on the field, it had been a good evening for them off it. Slough Town just had too much know-how for them and the two division gap was evident. But they'd just had their best ever cup run and their second best ever attendance of 541 (behind the Bristol City friendly in 2017. It was well above the 300 that they were expecting and the 282 average that they've had so far this season. Considering the large crowd, it had been well hosted with everyone able to park and queues not too big. Slough's performance had been a far cry from the performance the last time I'd seen them in the FA Cup back in 2011 as a Southern League club, they'd suffered a giant-killing at the hands of Combined Counties League side Hanworth Villa. We left around 9.45 and thankfully, it was a much better journey home. I dopped Anwar off at 11.40, getting home myself at midnight. I stayed up for a while, watching TV before going to sleep around 40 minutes later. 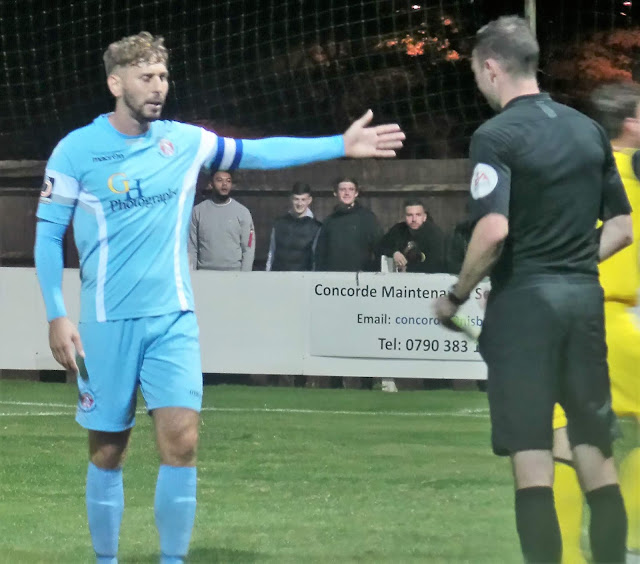 
THE CREEK is a tidy and compact ground, set just off the A4. As a result, there's not a lot around the ground, but facilities at the ground are decent including a tea bar and a clubhouse with a reasonable range. There's also a small range of merchandise at the club shop. The ground itself has a capacity of 2,000 and is mainly open with covered seating for 200 and covered standing for around 300. 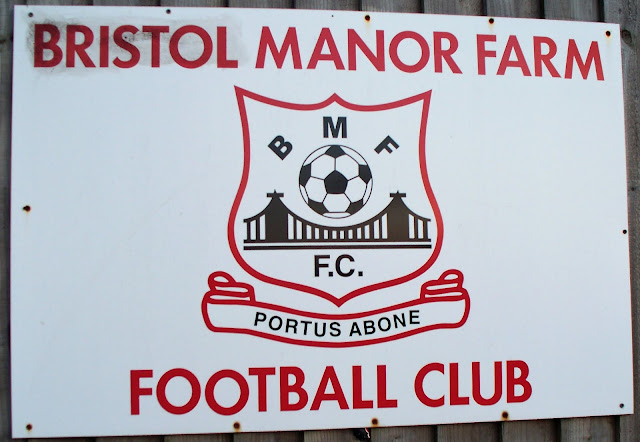 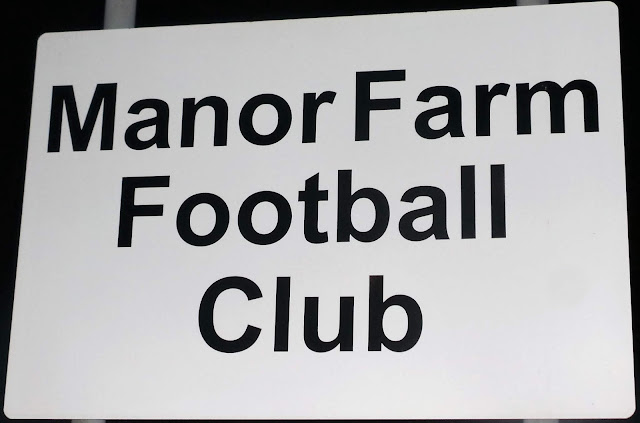 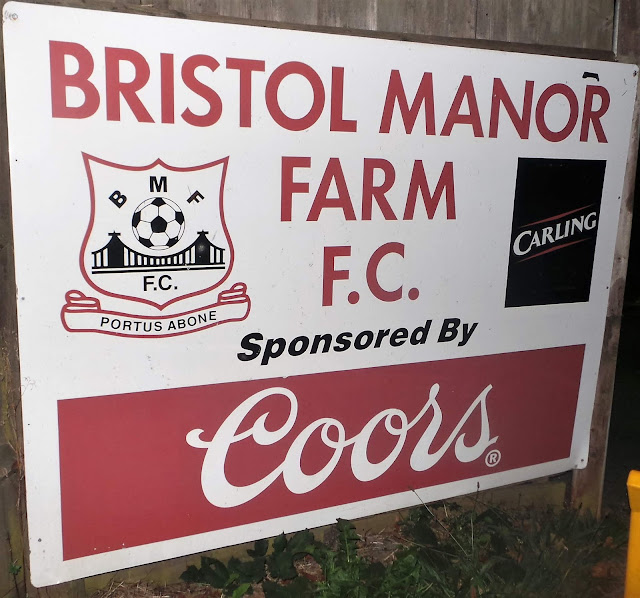 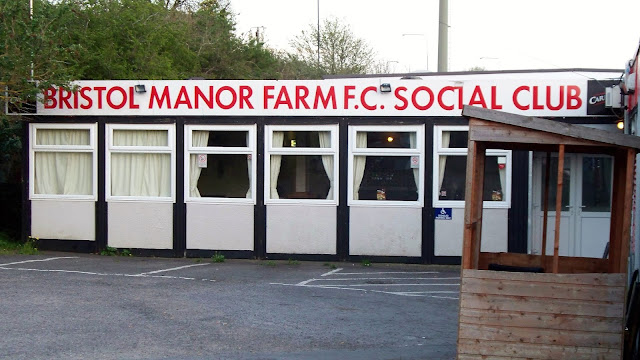 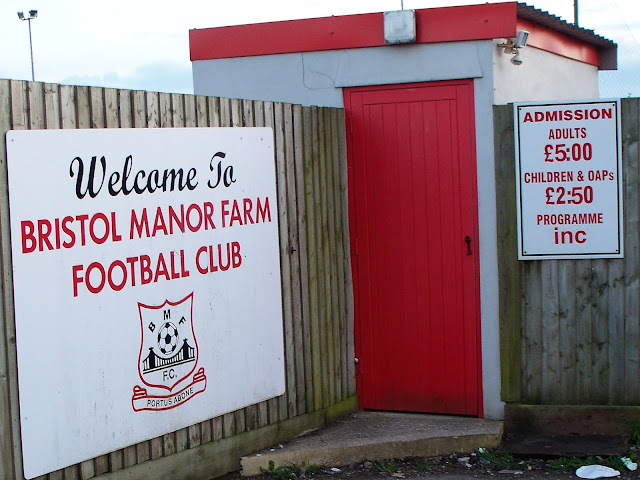 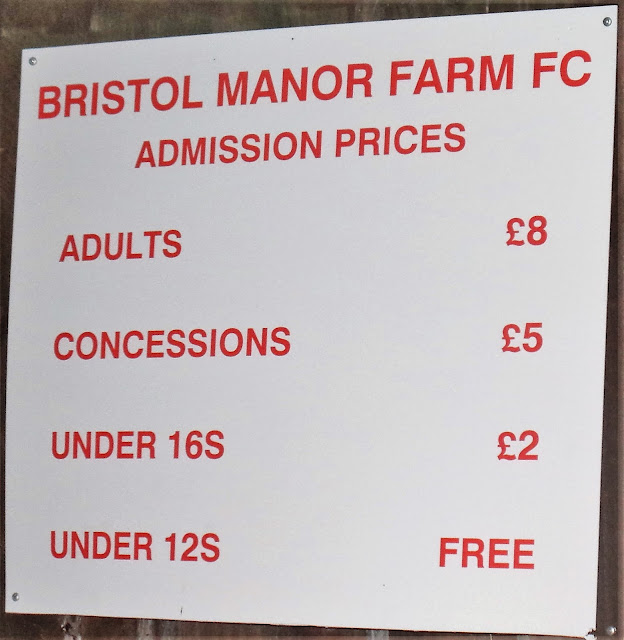 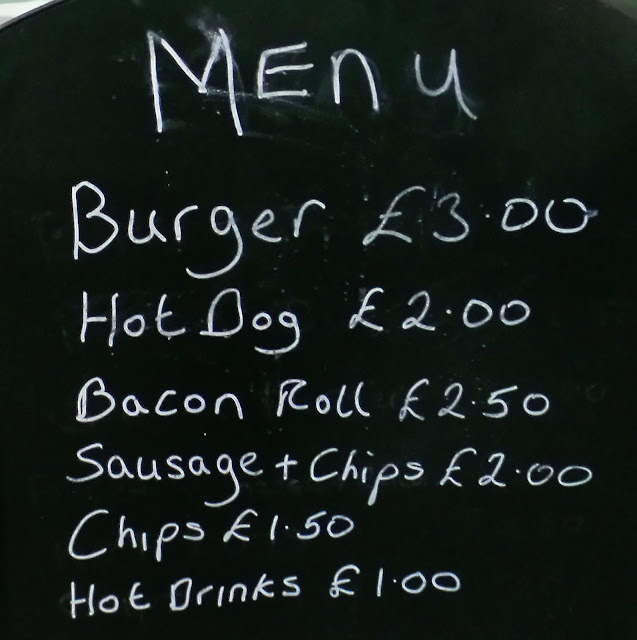 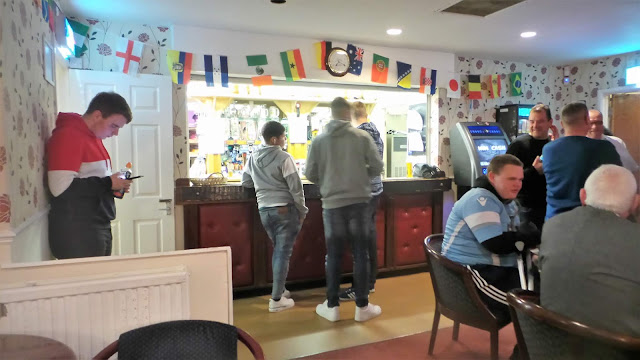 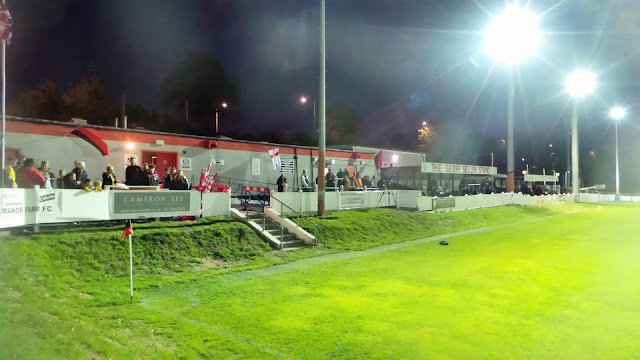 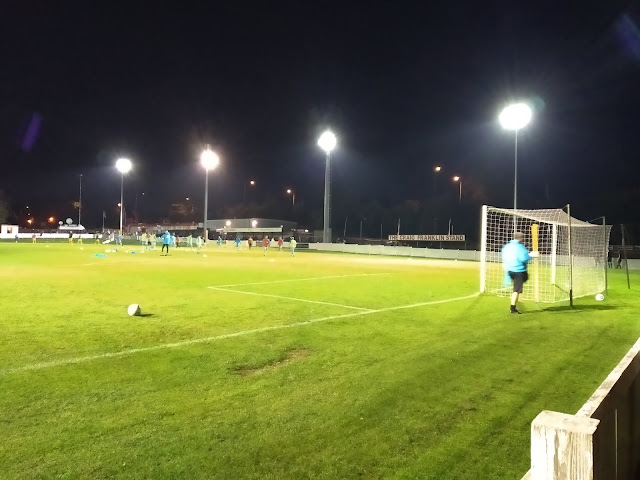 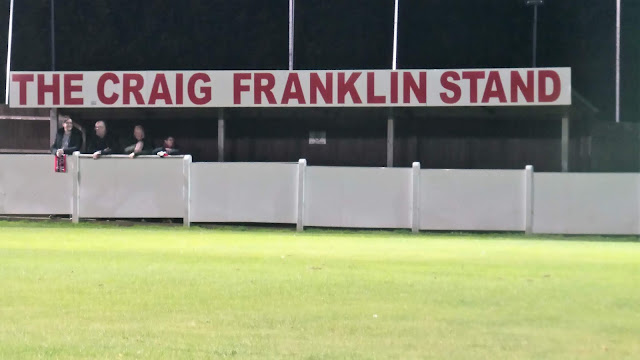 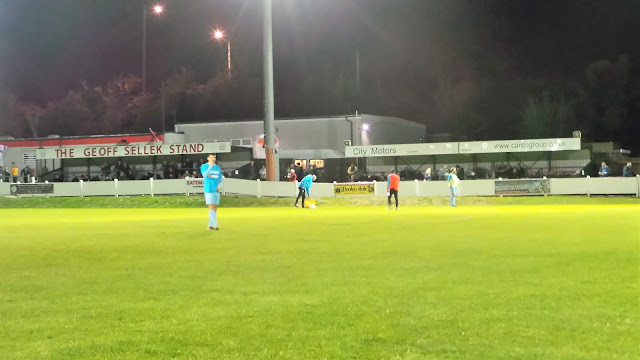 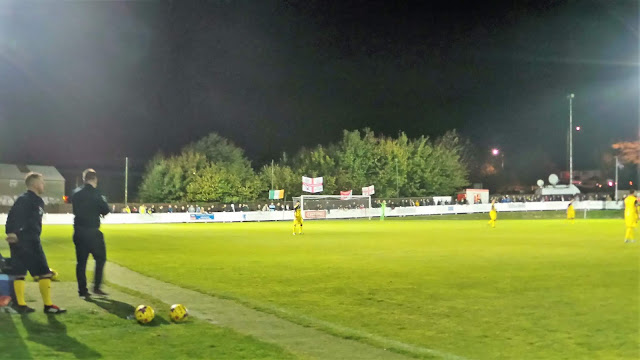 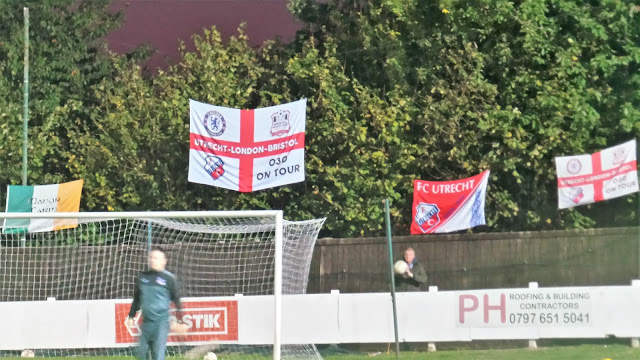 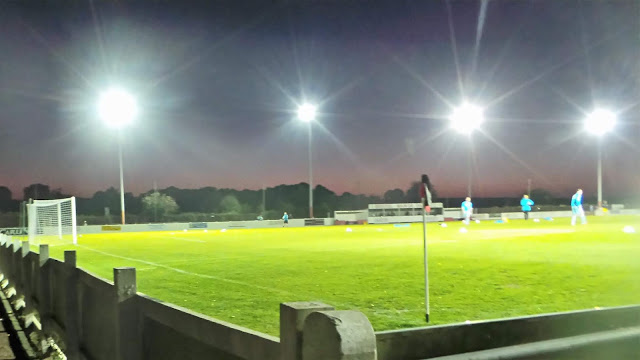 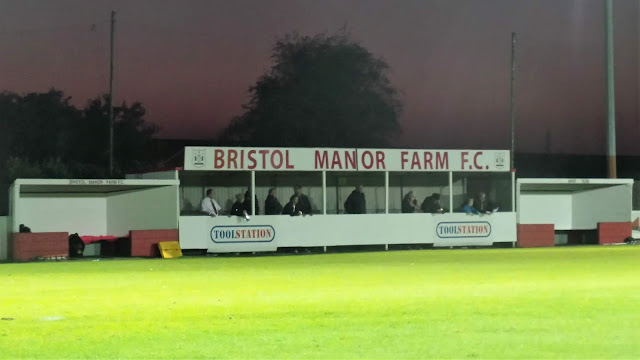 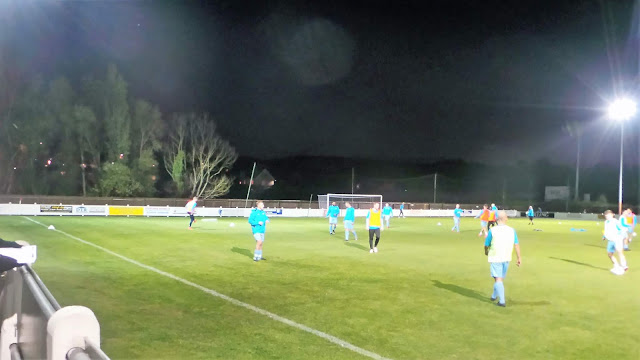