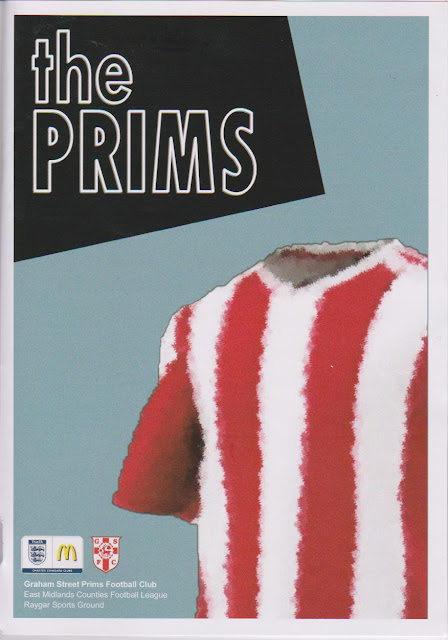 The current incarnation of the club was established in 1995 though there have been previous clubs (1904-14 & 1953-91). Upon the latest formation, they absorbed the Derby Carriage & Wagon Club and joined the Central Midlands League Premier Division. They earned promotion to the higher level Supreme Division after finishing 3rd in their debut season and although they finished as high as 5th in 1997, they were relegated back to the Premier Division two years later. It would only take a single season to bounce back, being promoted after finishing as runners-up behind Holbrook. The next 5 seasons were spent back in the Supreme Division, finishes ranging from 6th in 2005 to 18th in 2003. In 2008 Graham Street Prims became founder members of the East Midlands Counties League and have remained there to this day. Finishes have ranged from 8th in 2013 to 19th in 2017. This season has seen an excellent start and a chance of their best finish in the current non-league pyramid as they sat in 6th place at the time of kick off.

The club has not seen any progress in the FA Cup, going out at the first hurdle in 2013 (lost 3-1 at home to Shepshed Dynamo) and 2014 (lost 3-0 at Holwell Sports) in the only two times they have entered. 2013/14 saw their best run in the FA Vase as they beat Mickleover Sports, Harrowby United & Loughborough University before a 2-0 defeat at AFC Rushden & Diamonds. Local cup wins include the EMCL Cup in 2014. The most well-known player to play for the club who is former Football League midfielder Michael Simpson who made 290 appearances for my own team Wycombe Wanderers. The club is based in the Spondon area of Derby which has a population of 12,377 according to the latest census. 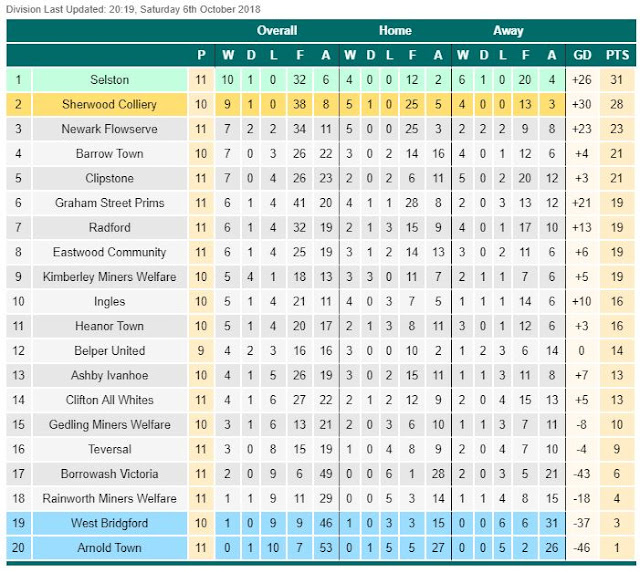 For the Wednesday of my week off work, I was keen to do a game with fellow hopper Chris, as he could help out with petol money and keep me company. Usually when I go with him its something up the M1 or in the East and so this proved the case on this occasion. With him not wanting to be up too late with work in the morning, our chosen game was Graham Street Prims v Selston. We'd seen the away team less than a month ago at their own place and had also seen a game at the adjacent Borrowash Victoria ground. That night, we had been to a decent pub for a meal and that was the main reason that this game was chosen as I knew it was within walking distance. I'd also been to the ground in September  2007 to take pictures before a Chesterfield v Wycombe Wanderers game. 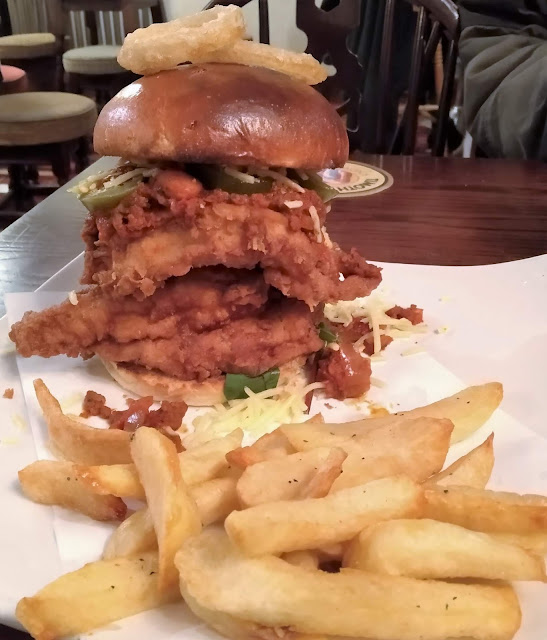 On the day of the game, I'd had a reasonable night's sleep, waking up at 8.30. Normally, I'd take a walk down town for some exercise, but today I skipped it as I had plenty to do. I spent the morning typing up my blog from last night's visit to Bristol Manor Farm v Slough Town. After a bit of lunch, I went to get my car sorted as it needed two new tyres and the wheel alignment done. After half an hour at home, I headed out at 3 to meet Chris in Wavendon. I got there just over an hour later and we soon got on our way. For once it was a good journey and with only a slight delay, we got there at 5.50. We'd decided along the way that we'd be up in this neck of the woods again for Sandiacre Town v Radcliffe Olympic on Friday. We walked to a local pub, The Wilmot Arms, where I had a hot and spicy chicken burger with a bottle of Westons. The food took a while to come, so I was glad we got there early. The pub was packed and we finally got our food after 50 minutes. Our burgers were huge mind and filled us up as we headed to the ground. We got there at 7.25, paying £5 entry and £1 for a decent programme. After getting pics of the ground, I joined Chris on the halfway line to watch the game. 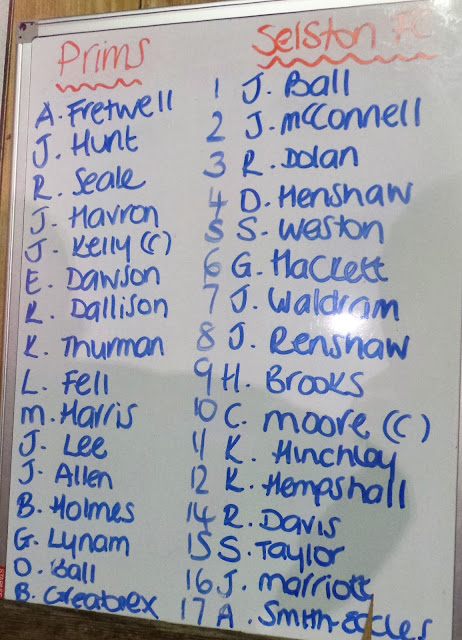 Graham Street Prims had the better of the early exchanges but it was league leaders Selston that took the lead on 13 minutes.  Josh Waldram made a great run down the right and blasted into the roof of the net from out wide. The visitors seized control and the doubled their lead on 34 minutes when Carl Moore's square ball allowed Henry Brooks to tap home from 6 yards. Selston's dominance continued and they hit the post before the halftime whistle. The second half started at a fairly sedate pace but Lee Fell pulled one back for Graham Street Prims on 55 minutes when he capitalised on hesitant defending to finish a low shot from just inside the box. The game looked to have been sealed on 78 minutes when Scott Taylor's shot from the edge of the area hit the left-hand post and  Kieron Hinchley put away the rebound from point-blank range. Selston had looked very proficient up to this point and even on 87 minutes when a scrappy own goal by keeper Jake Ball made it 3-2, not many would have foreseen how the match would end. A minute into injury time a second goal from Fell via a deflection made it all square. Then on 94 minutes, a free kick was floated into the box and the ball was headed home for a sensational winner. I'd thought of it as the goal of the game, but according to the Selston Twitter, it was an own goal.

I'd not had the best view for some of the late goals as I was walking around at the other end of the ground getting pictures. But it had been a stirring late comeback and stellar entertainment for the crowd of around 75. I'd been in good company with Chris and another hopper and also spoke briefly to someone who reads my blog. We left at 9.40 and at first, the prospects of a smooth journey home were not good with our entry onto the M1 close, meaning we had to go down to another junction. However, once we got on, it was as good as its ever been with only a brief delay through a restricted speed zone. I dropped Chris off at 11.10 and made my way home. I was running fairly low on petrol and although I would have got home with ease, I decided to stop at Tesco as I'd need some for Friday's jaunt. I got home myself at 12.10 and with no reason to be up in the morning, I had a couple of cans whilst typing my blog and watching YouTube before going to bed. 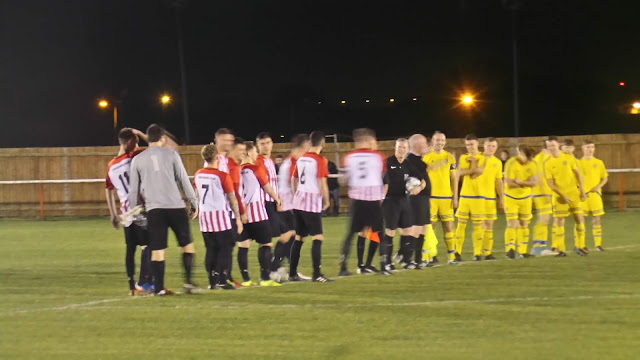 
THE RAYGAR STADIUM or ASTERDALE STADIUM is a pretty decent setup for step 6 and certainly makes a difference from some of the more modern grounds. Unusually, the main seated area is behind the goal and this holds around 100 or so. It's a solid structure rather than the usual metal stand. The rest of the ground is open aside from a small covered standing area along the side, this holds around 150. There's a tea bar at the ground selling a decent range of food at reasonable prices, though no bar that I could see. They also sell mugs and badges. There are pubs within walking distance either way and alhough the Wimot Arms had slow service, food was good. 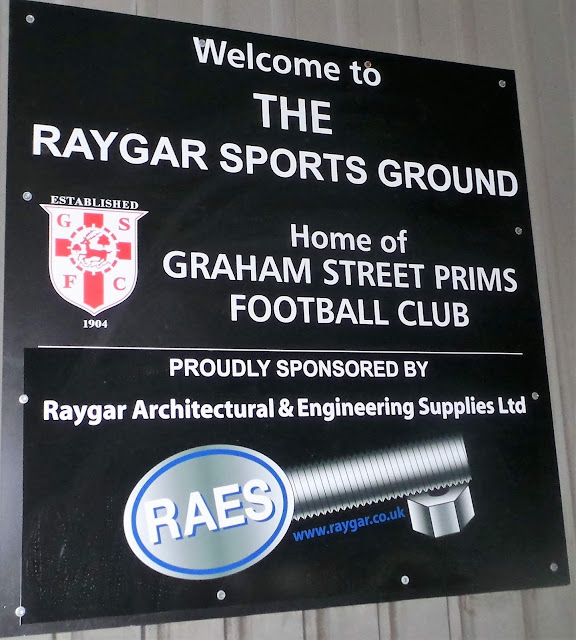 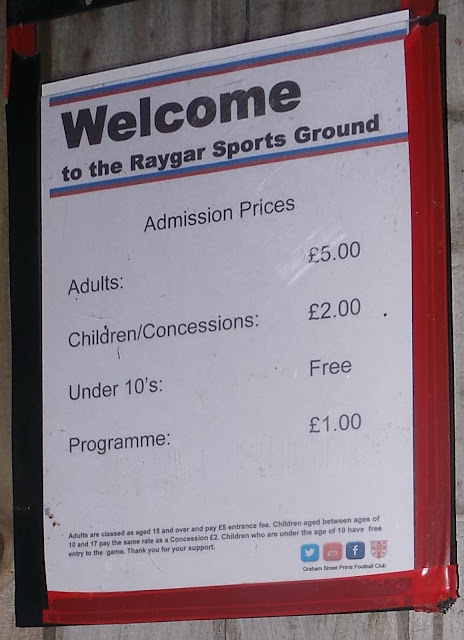 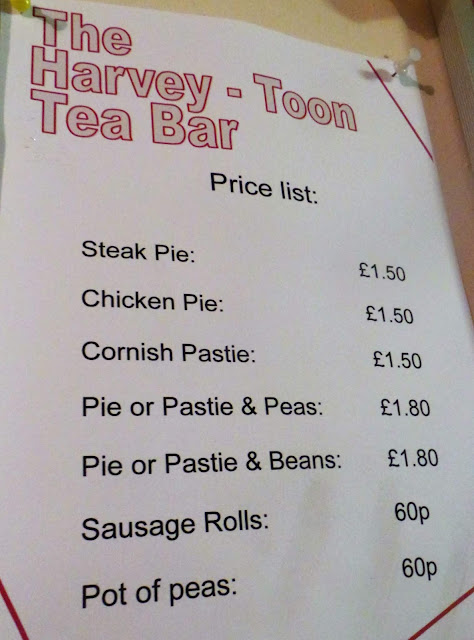 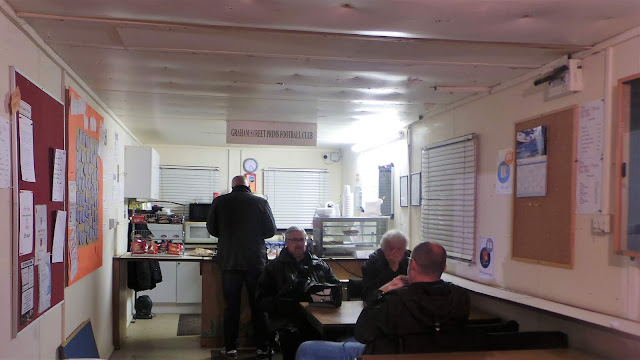 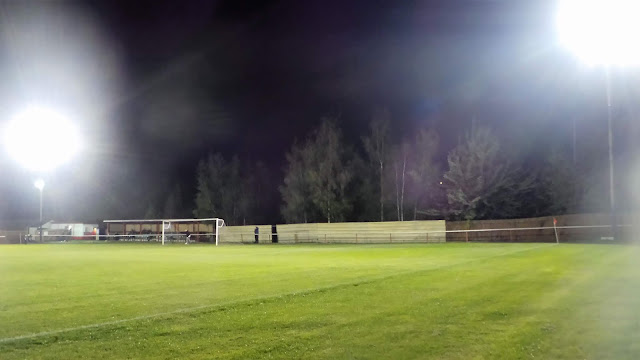 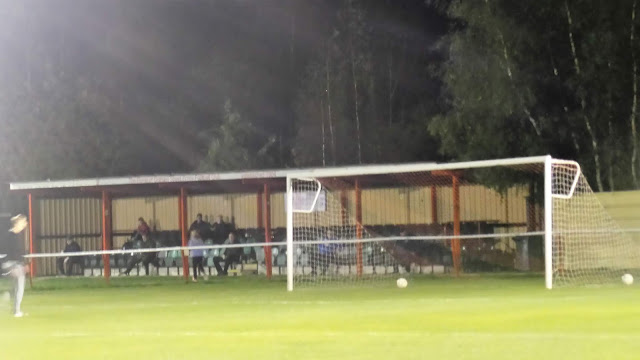 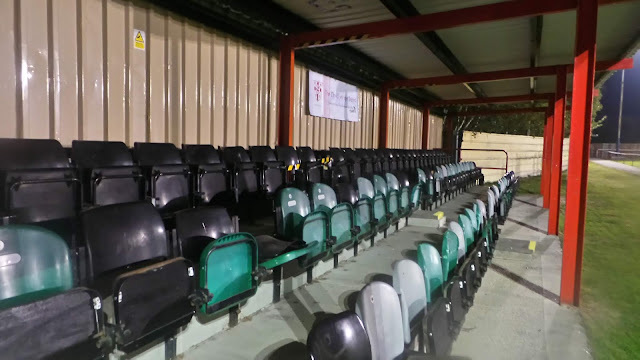 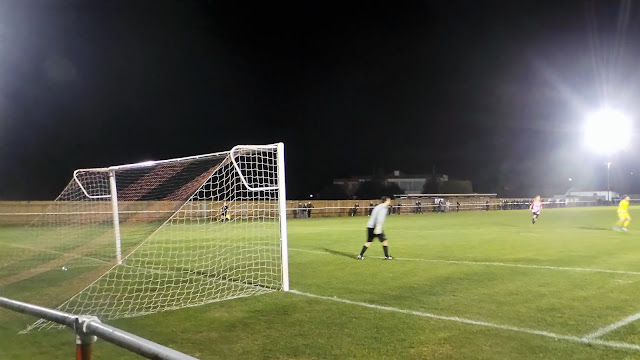 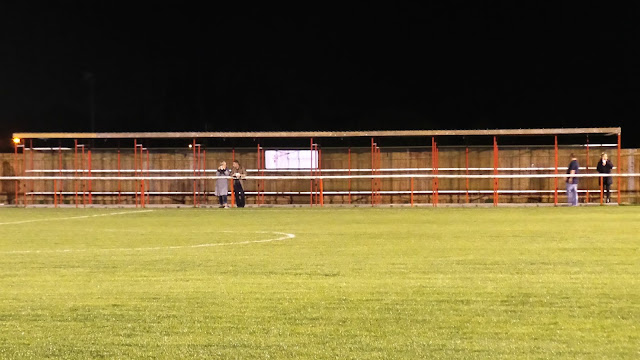 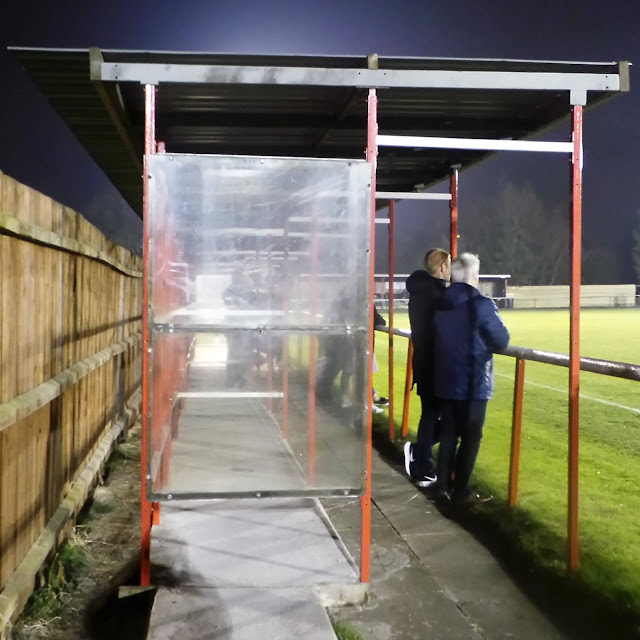 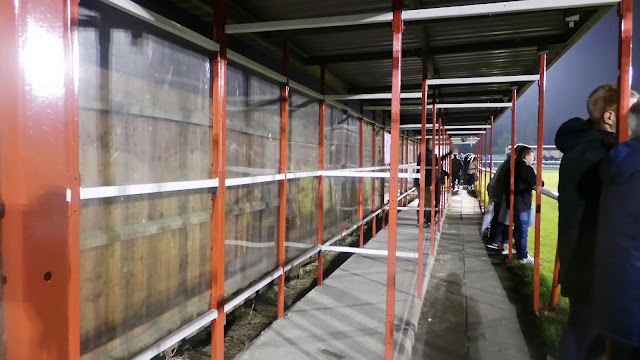 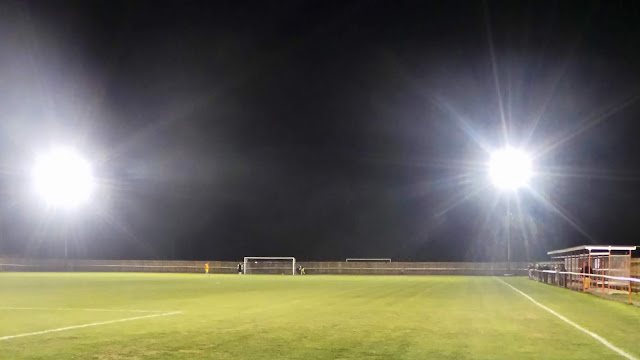 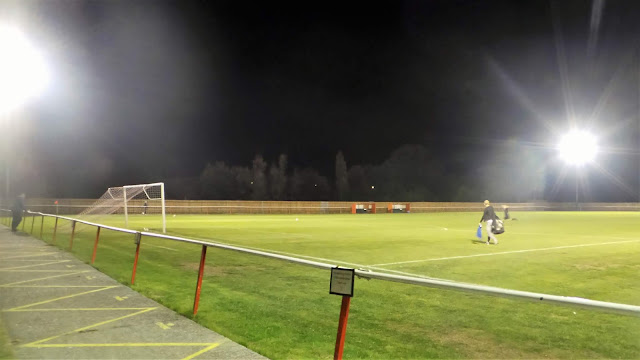 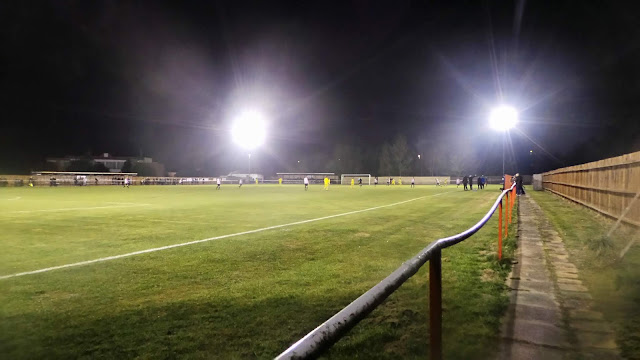 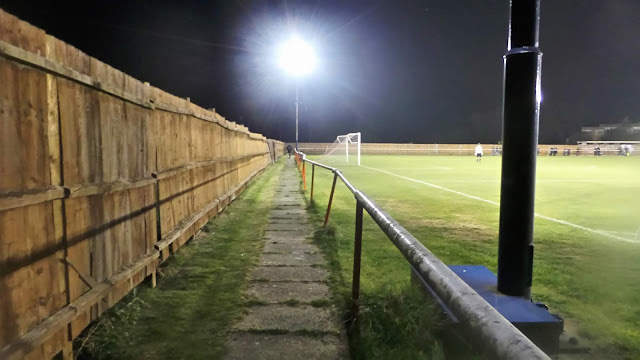