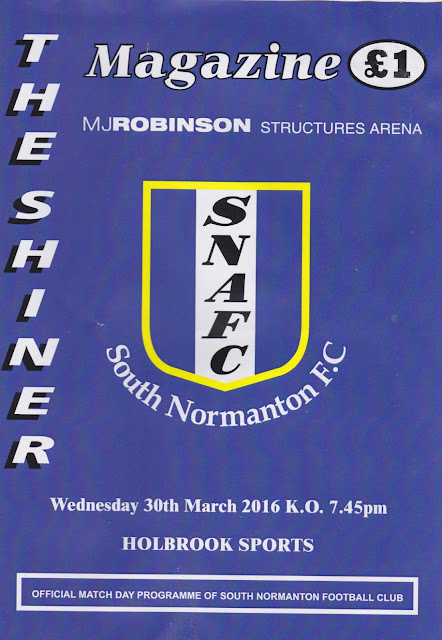 SOUTH NORMANTON ATHLETIC FC was formed in 1926, adopting their present name in 1990 after bring previously known as South Normanton Miners Welfare. In the same they joined the Central Midlands League, starting in its second tier. They were promoted to the Supreme Division in 1994, spending 3 seasons there before being relegated back. They bounced back straight away though when a 5th placed finish was deemed good enough to see them promoted. They joined the Northern Counties East League in 2003 initially at Division 1 (step 6) level. In 2007 they were promoted to the NCEL Premier when they finished in 3rd place behind Parkgate and Winterton Rangers. Despite having their best ever finish of 17th at step 5 in 2007/08, the club folded at the end of the season due to an ageing committee and no young blood to help. They remained dormant until 2009 when they reformed and joined the Central Midlands League Premier at step 9 of non-league. A promotion was achieved in 2011 to the Supreme Division, finally winning promotion to the East Midlands Counties League in 2014. After a 7th placed finish last season, they are looking to be in with a chance of promotion again this season, sitting in 4th at the start of play.

In the FA Cup, their first season was the most successful. 2005/06 saw them beat Arnold Town before losing 5-3 to Halesowen Town in the 1st Qualifying Round. They have also reached the 2nd Round of the FA Vase on a few occasions, the last of which was in 2007/08 when they lost to Dunkirk after a replay. The club's nickname of 'The Shiners' came from the 1750s when workers from the area worked in the ribbed stocking industry. The work involved sitting on stools for long periods, making the backsides of their trousers shiny, and therefore instantly recognisable. Nowadays the main area of industry is retail, with the East Midlands Designer Outlet being located close to the village. 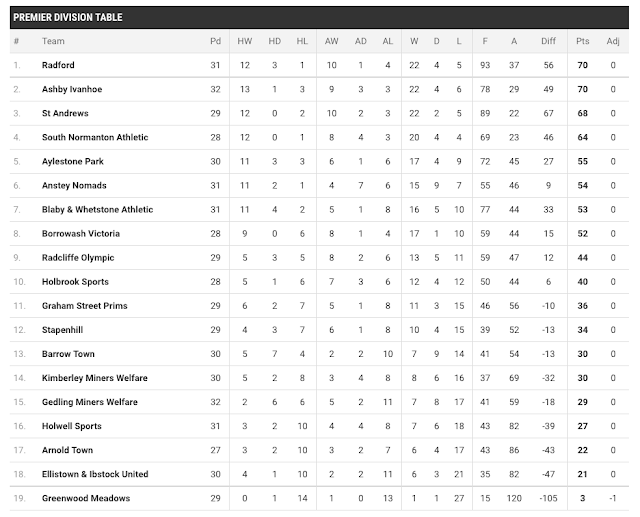 Normally I go groundhopping on a Tuesday night, but due to a combination of the Bank Holiday and the England match, there was not much to choose from. Add to that the fact that England put in a good shift on the Saturday in Germany, winning 3-2 with a good performance and I was happy enough to stay in. I still fancied a midweek hop though on the Wednesday or Thursday though, so I contacted fellow hopper Chris with all the viable options. Between us we chose South Normanton Athletic who were going well in the East Midlands Counties League which was fairly unexplored territory for me, having only been to a couple of games in this competition. That said I'd be going 2 games in a row, having seen Radford demolish Kimberley Miners Welfare 5-0 to go top of the league on Monday. It was a highly competitive league with several teams in with a chance of the title, tonight's host sitting in 4th place was one of them.

While sitting at home waiting for the England game, I was keeping an eye on what games had been postponed. It turned out I made a good decision as pretty much everything was ruined by the weather. There was a derby on the Isle Of Wight, which my mate Anders had come over from Norway to see. Despite the pitch looking fine, the typically fussy referee called it off, meaning he had a wasted journey. As for the England game, I watched it in bed sober. Though we lost 2-1 to Holland we showed some positive signs, despite the performance not being great. It was a fairly early night for a Tuesday, going to sleep at 11 as I was up for work at 4am. It was a fairly average day at work with me finishing at 12.30. I came home, having a bath and chilling before leaving at 3. I made good time, getting to the meeting point at Milton Keynes just before 4. It was also a good journey up the M1 with only roadworks with a speed restriction and rubber necking clowns looking at an accident on the opposite carriageway. Chris & I had so much time to kill in fact that we took a look at a couple of grounds at Pinxton and Blackwell. Both looked very good for step 7 or below and would probably do a good job should they wish to progress. Even with that, it was well before 6.30 when we got to the ground so after getting our programmes we went to our pre-match pub of The Devonshire Arms. There I had a couple of ciders from La Cantina, namely 'Yesterday's Dreams' and 'Moody Blues'. Both were excellent if a little sweet for my liking. From there we went to the Anchor Chippy, with me having Chicken Meat and chips. Later on, in the ground, I had Sausage Roll, curry sauce and chips and was still peckish. 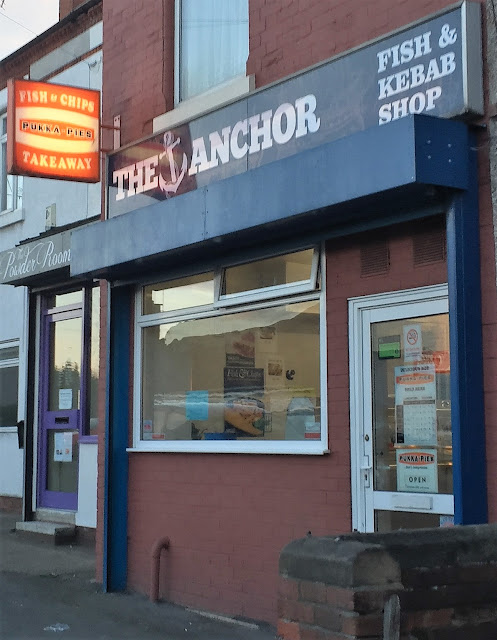 I paid £5 to get in and visited the club shop, getting a good deal on a pile of randomly interesting programmes for £2. Holbrook had the better of the first half and went in ahead, thanks to a close range finish just before the interval. Despite the hosts having much the better of the second half they just couldn't create anything clear cut and it ended against the form book with a surprise away win. It was a shame on real decent hosts and a decent venue, but the things on the pitch didn't go according to plan. It was a simple journey home, with the only delay being a lengthy stretch of road resricted to 50MPH due to very slow moving roadworks. Even so, I dropped Chris off in Milton Keynes at 11.10, getting home myself at midnight. I couldn't get to sleep until well after 1 though, and so had the usual trick of catching up with a few hours sleep the following afternoon. 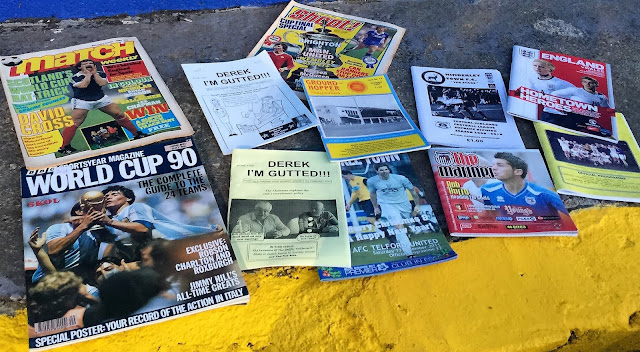 LEES LANE is an excellent venue for step 6 and is probably good enough for a few steps higher. There is plenty of cover with stands covering 300 seats and around 150 standing spaces. The rest of the ground is open hard standing, with the ground curved in what looked like it had on old speedway track previously. The club shop at the ground is very good with plenty of old programmes and books, though there were only really pin badges available souvenir wise.

For food, the tea bar is one of the best in non-league with plenty of choices and good value. More choice is available in the village with a surprisingly large number of outlets. There's a very smart bar with lots of club memorabilia on the walls, though it only has the standard range of drinks. For real ale and cider lovers, the Devonshire Arms is bang on the money whilst the Clock Inn is also worth a look. 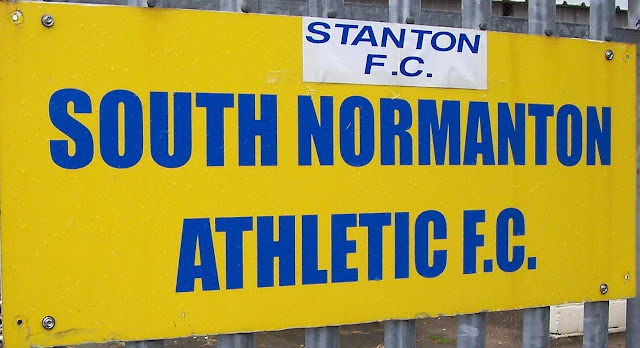 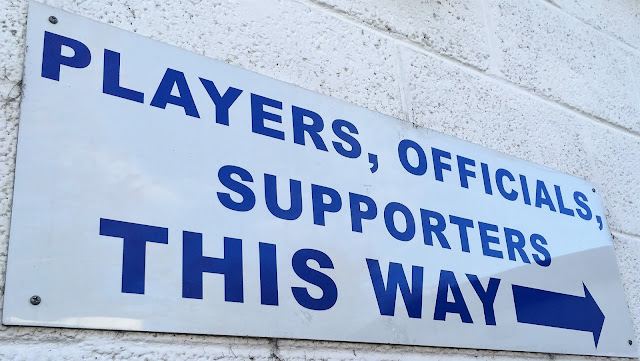 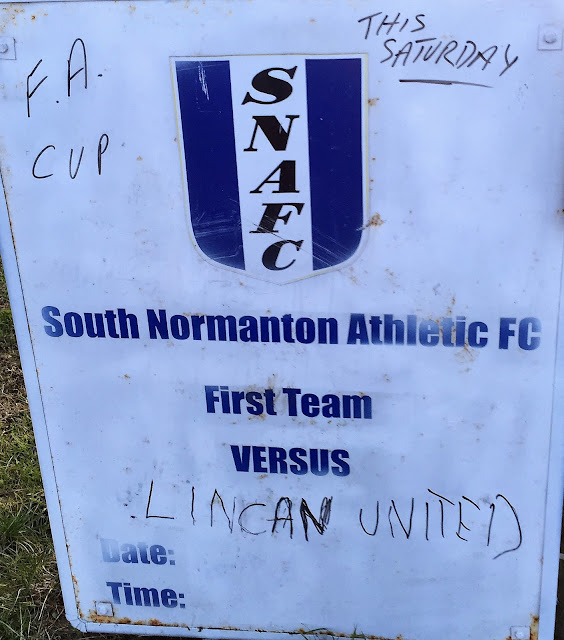 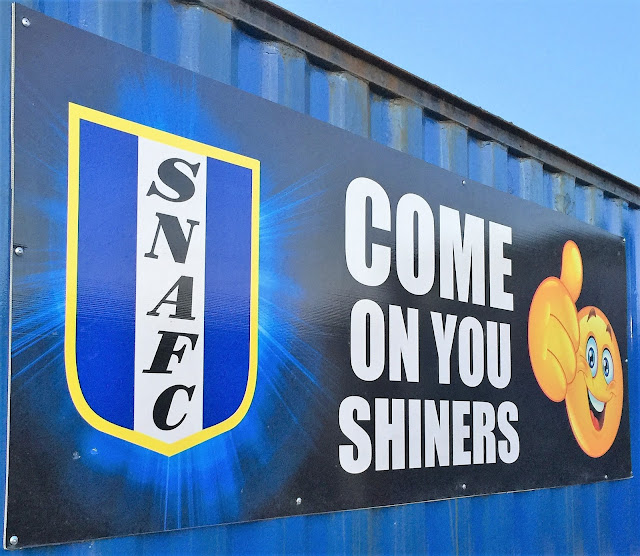 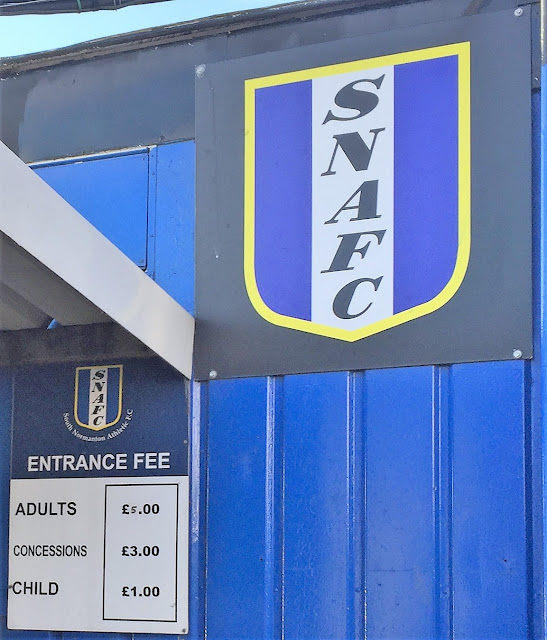 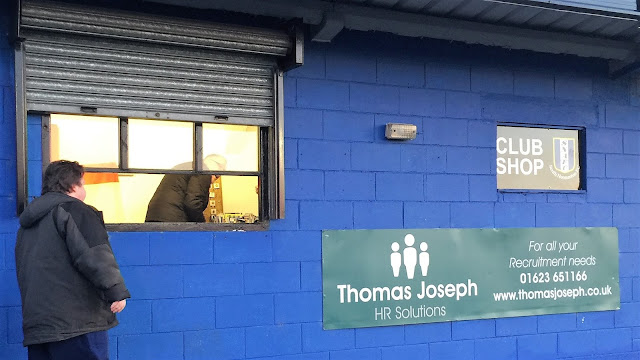 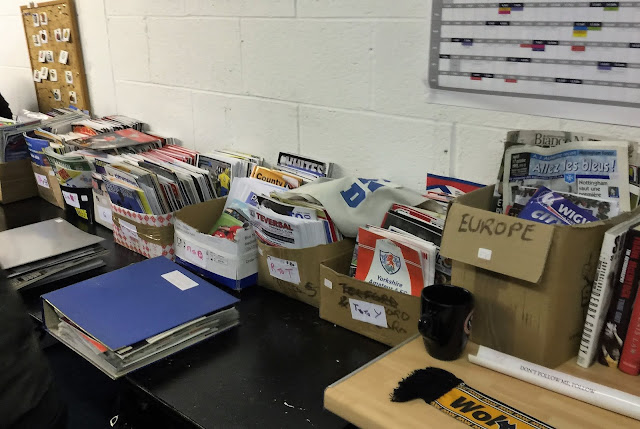 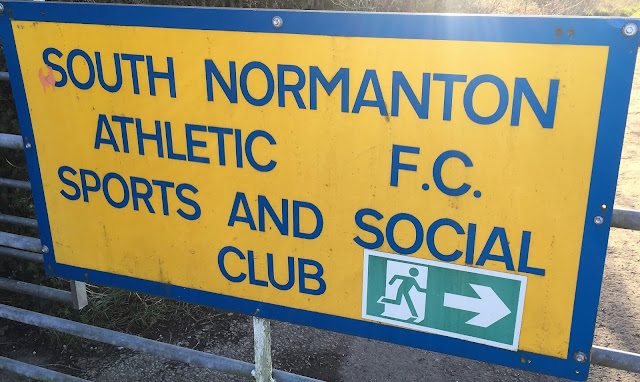 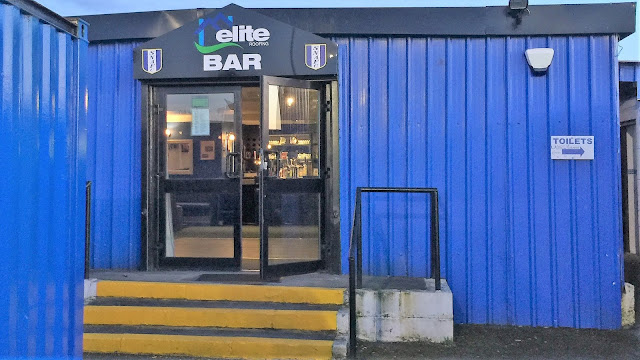 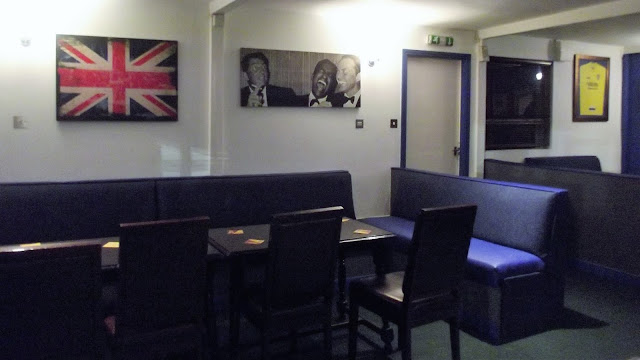 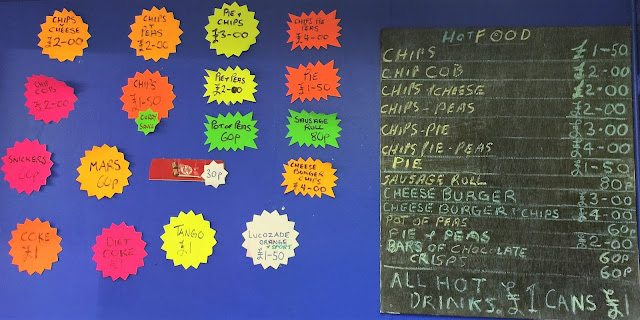 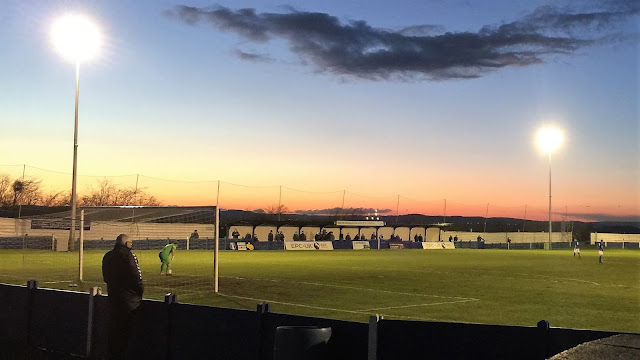 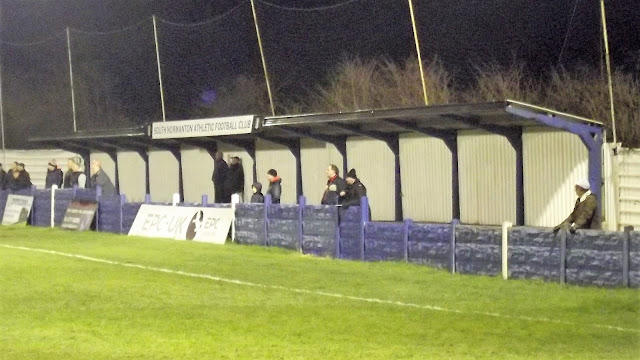 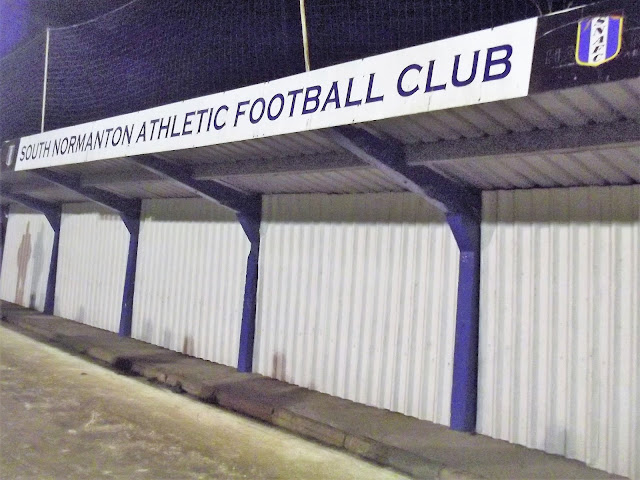 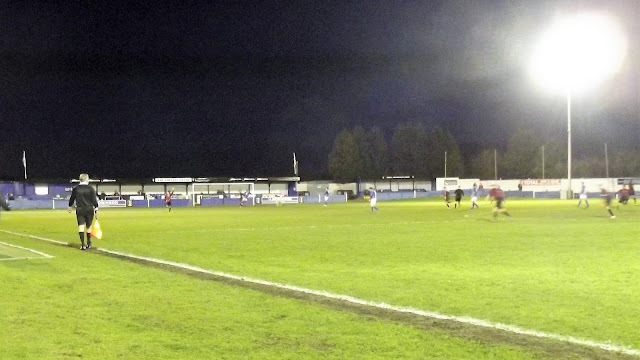 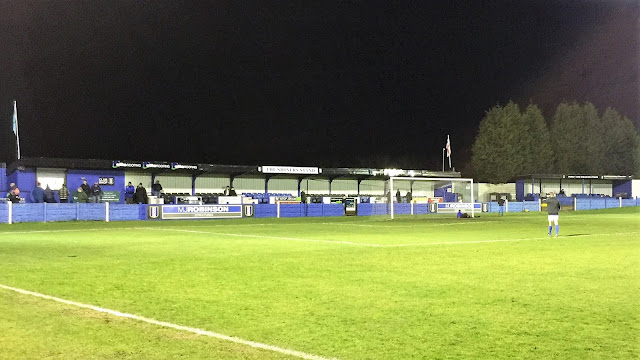 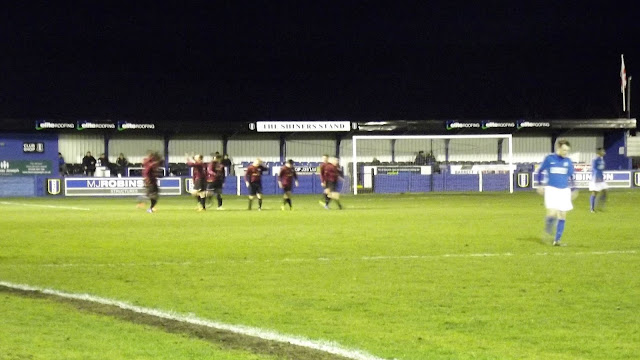 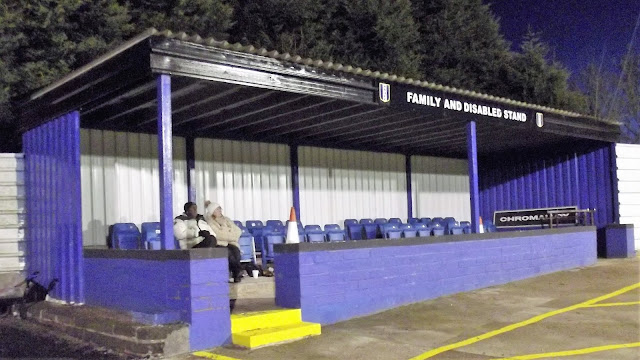 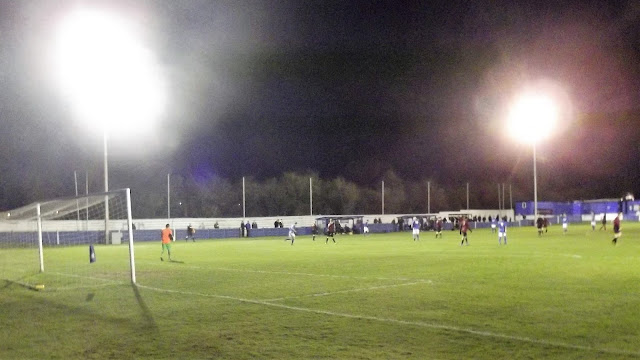 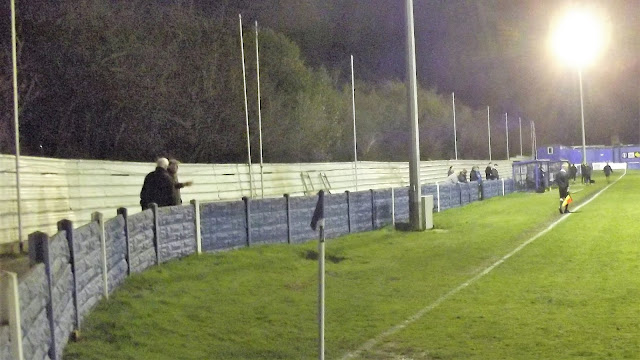 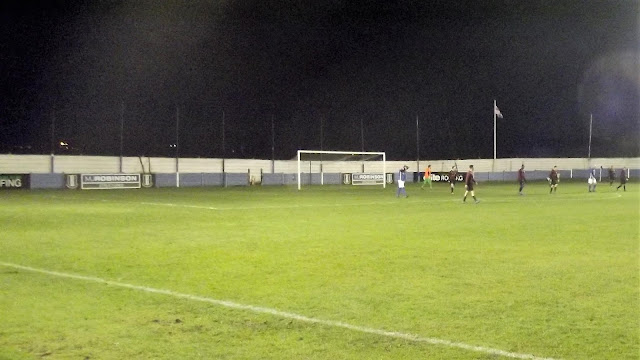 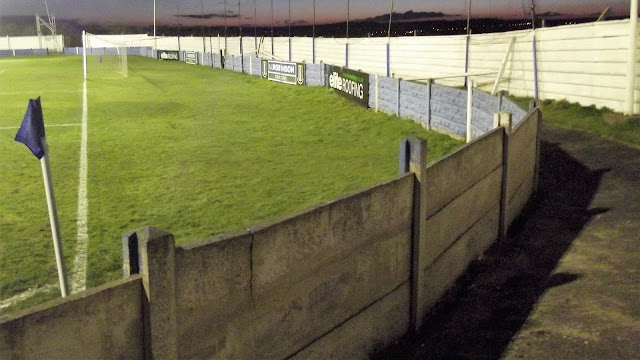