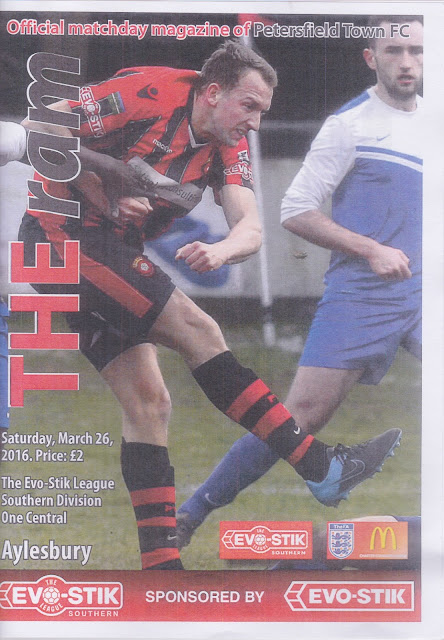 PETERSFIELD TOWN was formed in 1993, though there was a previous club in the town called Petersfield United who folded when they were denied permission to switch from the Isthmian League to the Wessex League. They got their wish to join the Wessex, but struggled at first, suffering 2 relegations in 1998 and 1999 which saw them in the Hampshire League Division 2. They bounced back, finding themselves in the newly formed Hampshire League Premier Division. Owing to the expansion of the Wessex League, they rejoined at it's second tier in 2004. It was not until 2014 that they would progress further, but what a couple of seasons they have had. A double promotion has seen them being crowned Champions twice and for this season they find themselves in the Southern League D1 Central. They've done very well too, mathematically safe for next season and with a realistic chance of a top half finish should they get a good run of results together.

This season has also seen their best run in the FA Cup with them reaching the 3rd Qualifying Round. After winning at Moneyfields in the Preliminary Round they gained notable victories over Weymouth and Cirencester Town before a 1-0 defeat to Conference South side St Albans City. Their only game in the FA Trophy saw defeat and the FA Vase proved equally as tricky with just a 2nd Round appearance to their name. They have no local honours Cup wise, though they've been runners up in the Portsmouth Senior Cup and Wessex League Cup. 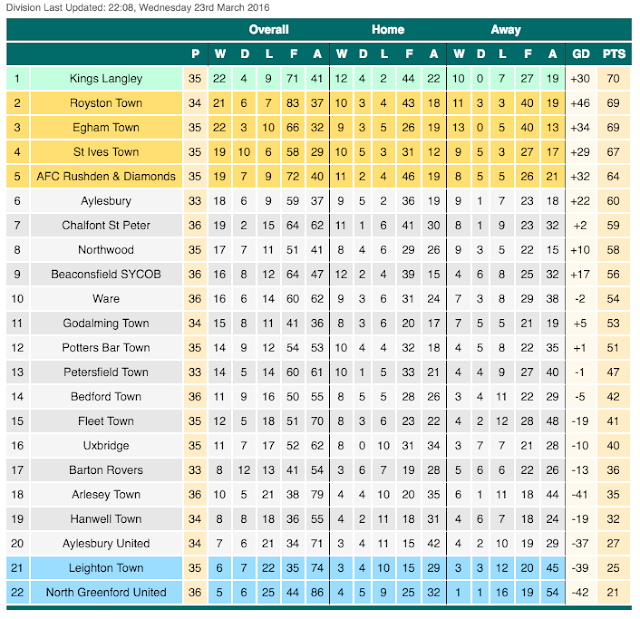 MY VISIT
Having completed the Southern D1 Central last season I was keen to visit Petersfield Town to repeat the trick after they were promoted last season. They were a bit out of the way for the geographical footprint of the league though and I was quite surprised when they were added. Even so, I was looking forward to visiting and the ideal opportunity came when they faced my fellow hopper Anwar's team Aylesbury FC. Though the fixtures came out in July, we would have to wait to nearly the end of the season to visit, although we were glad that Wycombe moving their home game with Mansfield to Good Friday meant that we could attend the game. Despite all this there was nearly a late change to my plans for a trip to Truro City, however not being able to find anyone to go with put pay to that. Thankfully the ground will live on for another season so I have more time to 'tick' it before it goes. After a lot of wrangling, I was pleased that I’d been able to get 4 days off for Easter. Initially, they had tried to deny me it, but after going to see another manager and explaining that I was entitled to it, they soon backed down. I’d spent the previous day watching Wycombe grab a 1-0 win over Mansfield Town at Adams Park, having worked the good Friday morning. On the day of the game, I woke up at pretty much my normal work time and couldn’t get back to sleep and so was denied a lie in. After getting ready and killing time, I left home at 10.25, planning to stop at Morrisons on the way to pick up Anwar & Carl from Aylesbury. 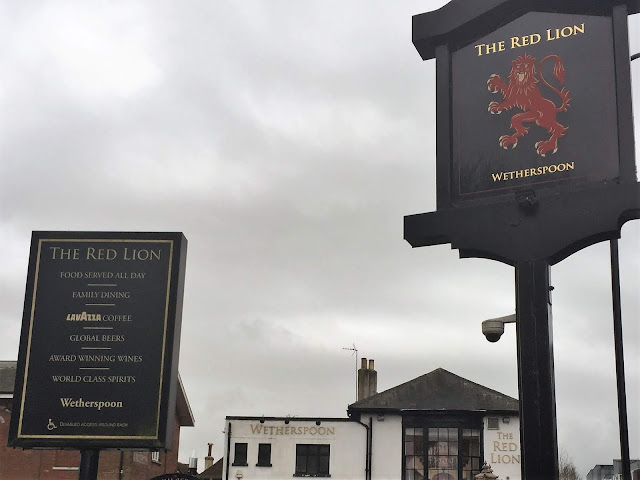 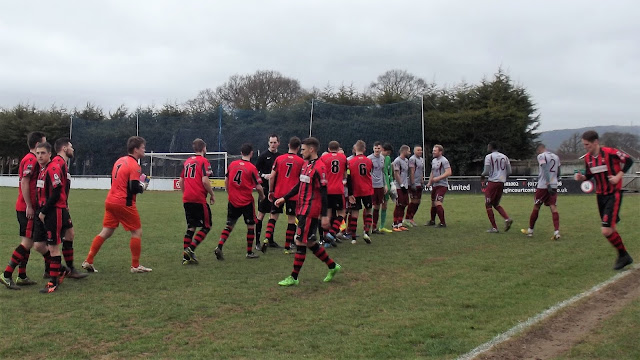 After getting a few bits I met the lads at 11.15. The journey down was a pain with the M25 being it's usual dreadful self and we got to Petersfield at 1.40 after 45 minutes frustrating delay. I knew where dinner was going to be and it was less than 10 minutes to the local Wetherspoons called The Red Lion. The pub was packed with parents and their kids but we managed to find a table. It's usually a right bun fight for the bar in Spoons but it's a bit posher and civilised in Petersfield with everyone forming a neat line while waiting. I had myself a double Texan Burger with all the trimmings and a Thatchers Gold for £8.50.  It came in a good timely fashion too and by 2.30 we were all finished and ready to go back to the ground. We got there at 2.40 and paid £7 to get in plus £2 for a programme. After taking some pictures of the ground we picked a spot to watch the game from which had to be chosen with care as there was a strong, chilly wind blowing around the ground. The match report from the non-league paper is below. 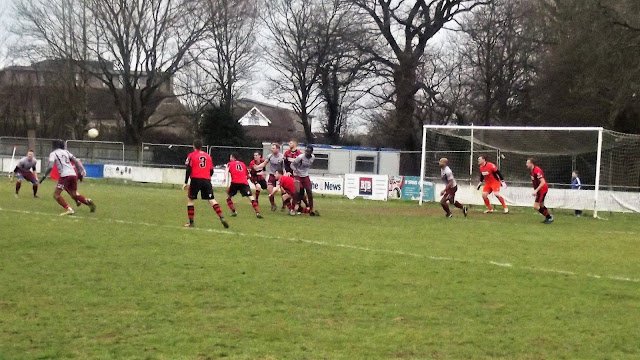 So an entertaining game, but I’d not bought the best of luck to Anwar’s team with them yet to win in the 5 times that I have seen them. We left around 4.50 and made good time on the way home. By 6.15 I was dropping off in Aylesbury, getting home myself 25 minutes later.  I had a few drinks with the England match. I was initially not expecting much from this game and was merely looking for a football fix with Match Of The Day absent from that night's TV schedules. But what I got from what I initially thought was 'another sodding pointless friendly' was a great performance from England. Even at 2-0 down we looked good. In the absence of Wayne Rooney, a young England side played some of the best football that we have done for years. Fine player though he once was, he's well past his best and drags the team back 10 years when he does play in a proper tournament. The new breed beat the World Champions 3-2 with Jamie Vardy, Dele Alli and Danny Rose especially impressing. For once it was a pleasure to watch and then listen to the after match phone in. It left me wondering what German Chancellor Angela Merkel would have thought about the result - in my merry state I noticed she bore an uncanny resemblance to 1970's kids TV favourite Jeanette Krankie! 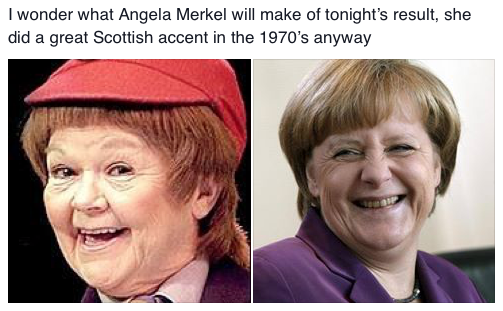 LOVE LANE was a ground that I'd visited before, though not for a game. On the 1st December 2009, I took a look on my way to Southampton v Wycombe Wanderers in a League 1 game. I saw a smart and tidy ground with a 3000 capacity and a 250 seated stand as covered accommodation. On my revisit, it was almost the same, only with the main stand looking a bit worse for wear. There was a further area of cover on the other side, plus a new seated stand being built. There was no club shop that I could see, though badges were on sale at the bar, which had the usual range of drinks you would expect. The tea bar was a bit basic, due to a recent fire at the ground. A decent shout is to walk to the pleasant town centre which is 10 minutes away and has a good range of outlets to cater for most tastes. 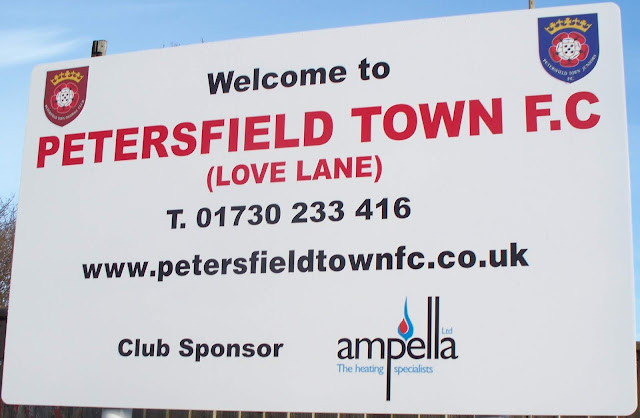 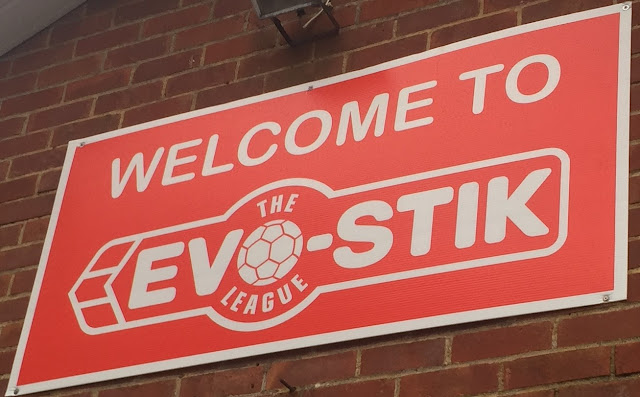 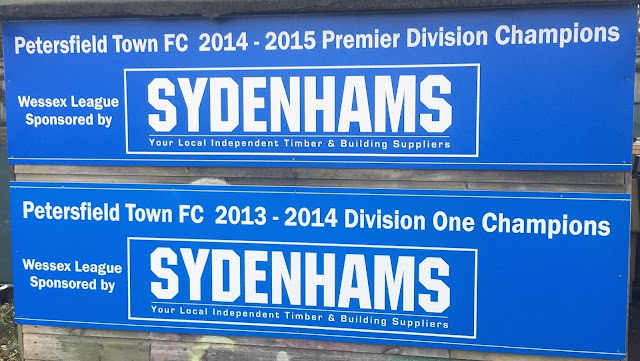 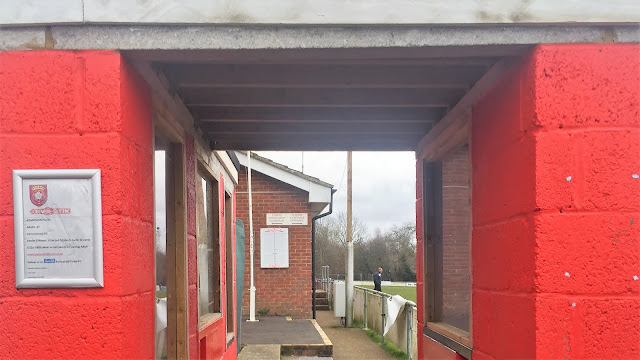 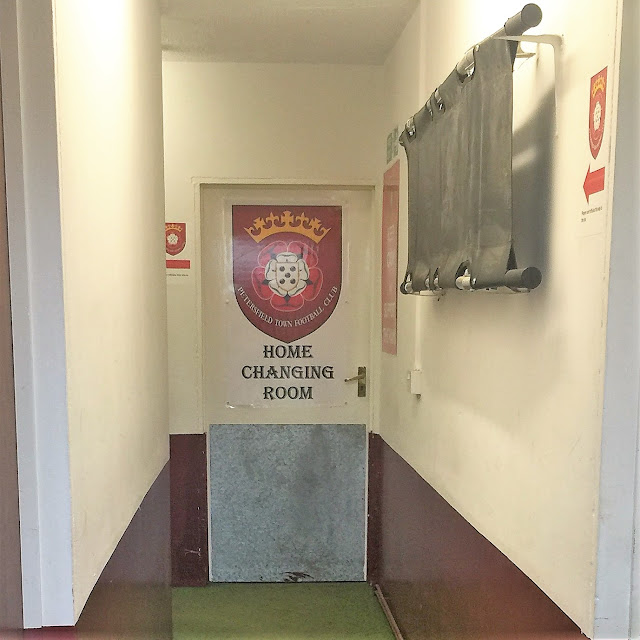 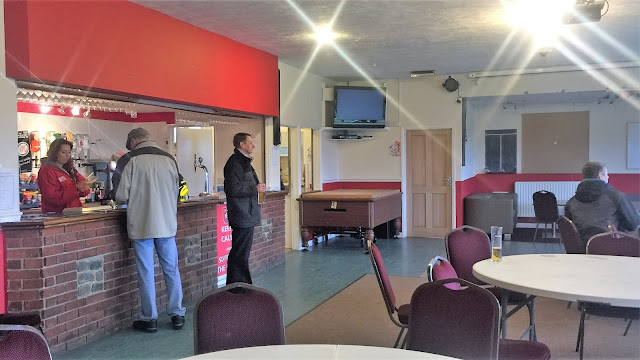 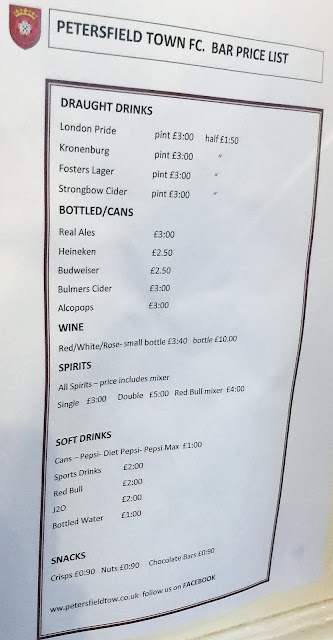 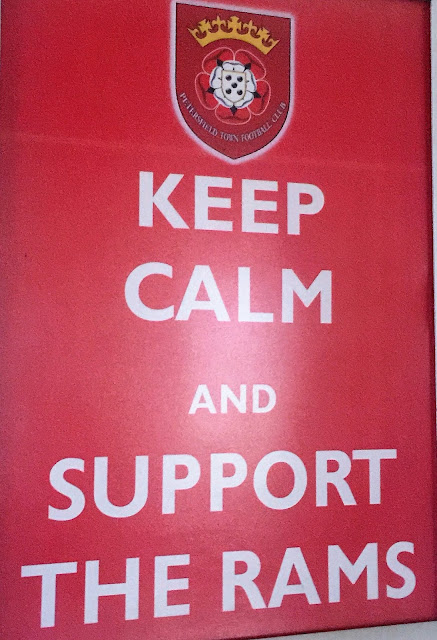 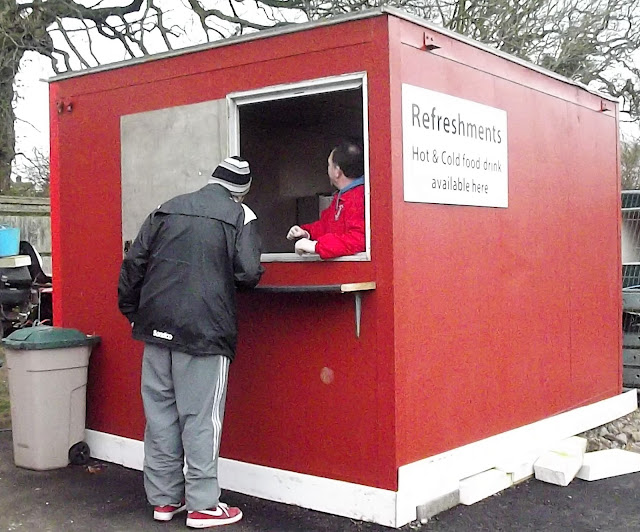 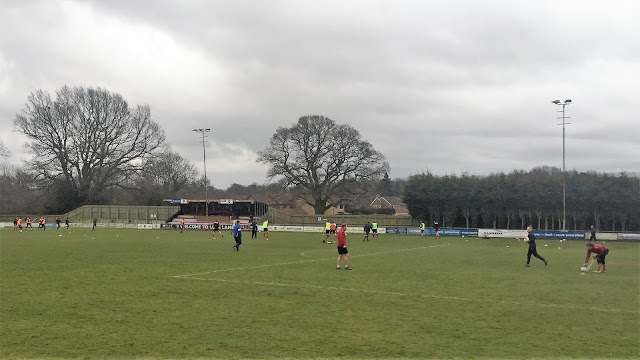 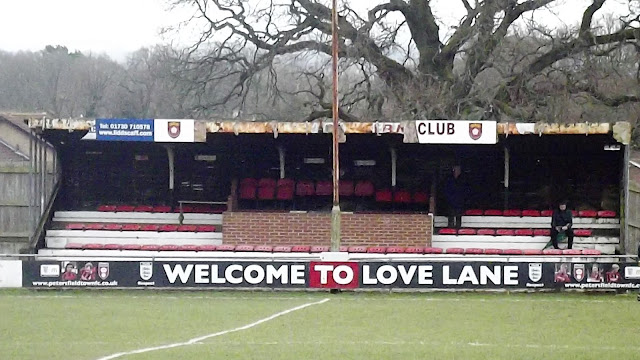 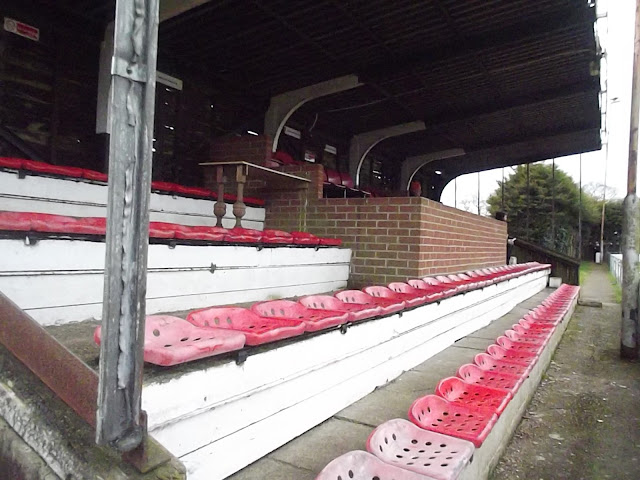 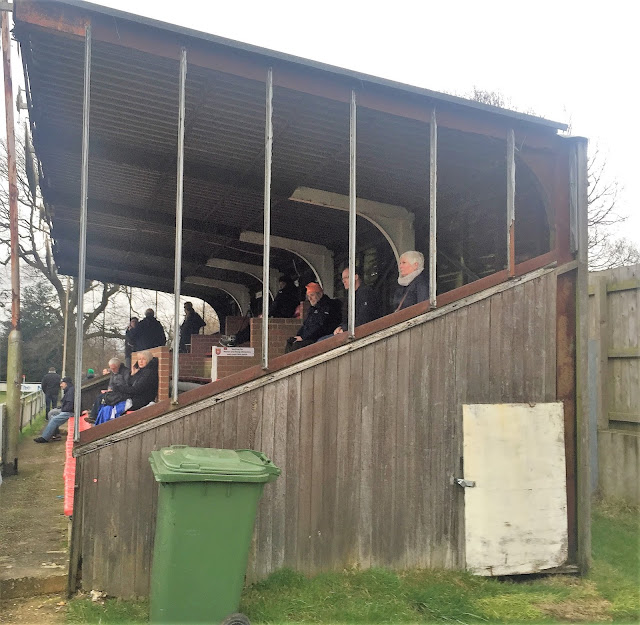 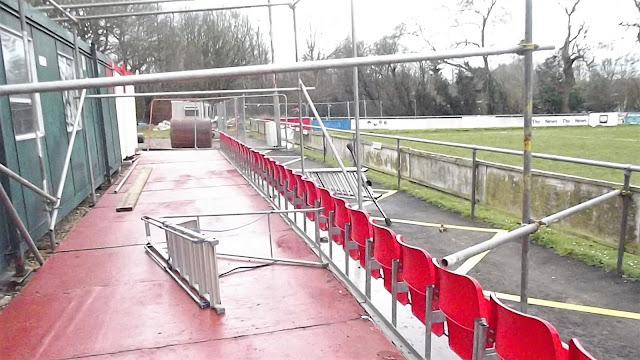 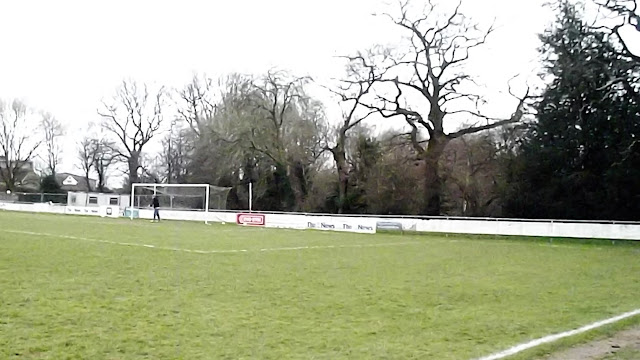 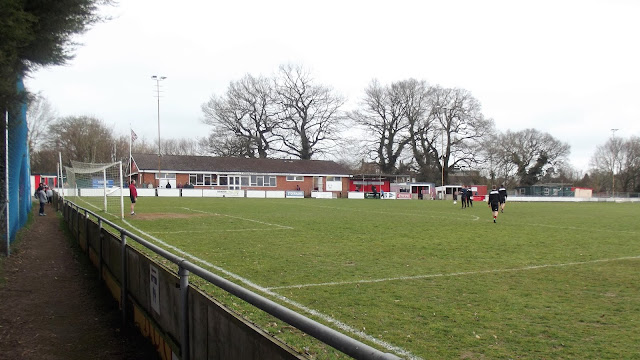 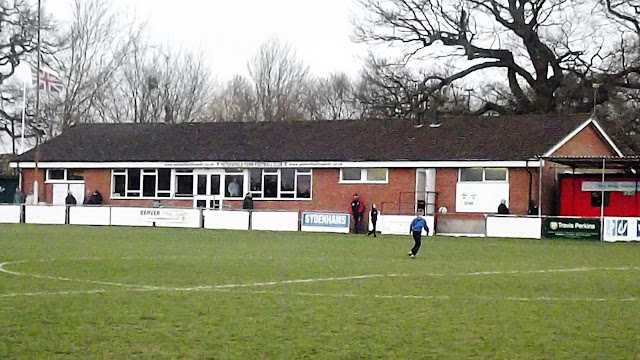 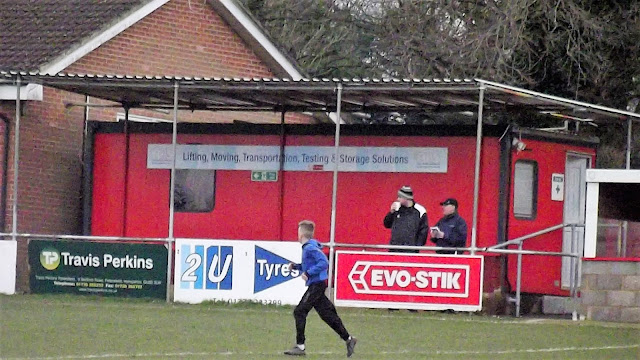 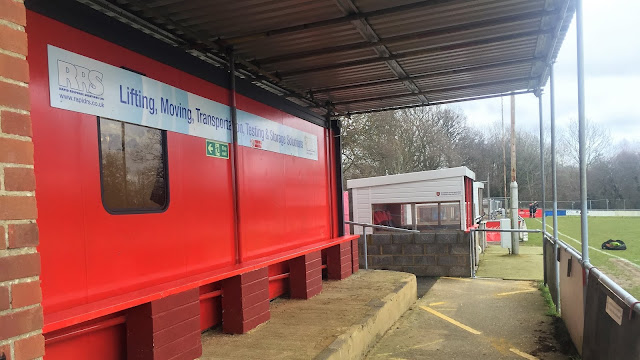 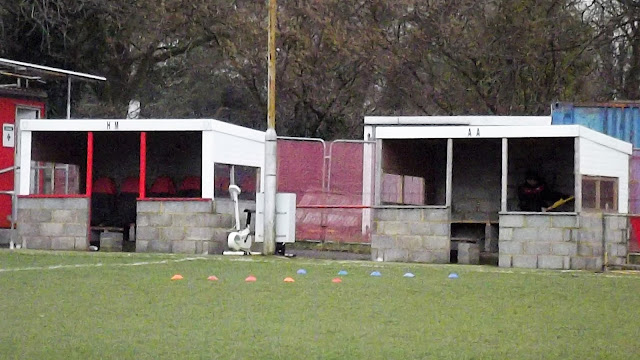 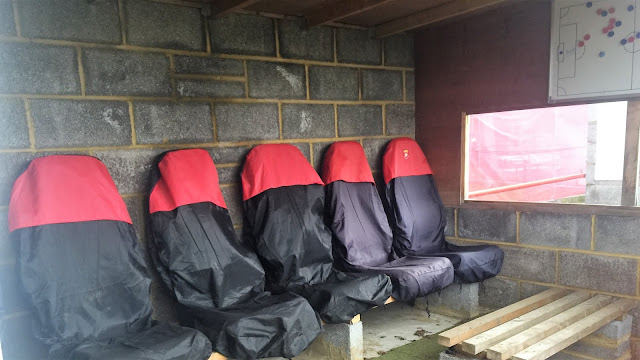 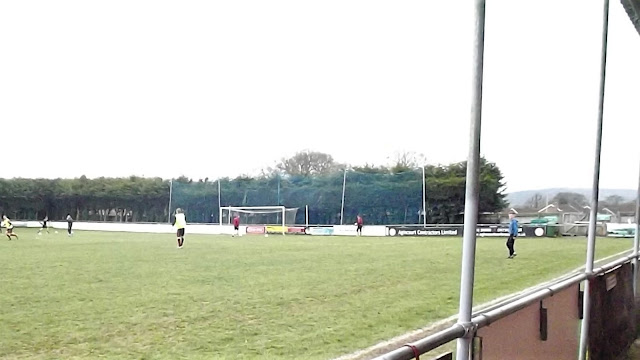