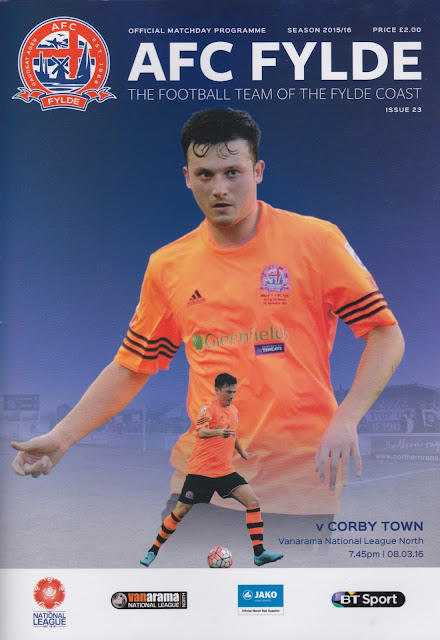 AFC FYLDE was founded in 1989 following the merger of 2 local clubs. Initially known as Kirkham & Wesham, they played in the West Lancashire League up until 2007. Remarkably they were champions for 7 out of 8 seasons before they finally took the promotion to the North West Counties League in time for the 2007/08 season. They finished 2nd behind New Mills in their first season, and that was enough to earn them promotion to the league's Premier Division. Over that summer they changed their name to their current moniker. They celebrated that change with the North West Counties League championship and for the following season were promoted to the NPL D1 North. 3 seasons were spent here, culminating in the league winning season of 2011/12. In their first season in the NPL Premier, they lost out in the playoffs to Hednesford Town in the semi-finals. The 2013/14 season saw them put that right, beating Worksop Town and Ashton United to advance to the Conference North. Last season saw their debut at step 2 and it was another great season in their rapid rise, even though they finished 2nd and lost out to Guiseley in the playoffs. This season they are right up there again, sitting in 4th place at the start of the game.

In the final season of being known as Kirkham & Wesham, the club won the FA Vase. The feat was all the more remarkable as it was their debut season in the competition. Worsborough Bridge Athletic, Brodsworth Welfare, Parkgate, West Auckland Town, Newcastle Benfield, Studley, Crowborough Athletic, Coventry Sphinx and Needham Market were beaten to get to Wembley. Lowestoft Town were beaten 2-1 in the final to take the Vase back to Lancashire. In the FA Trophy, the club reached the 3rd Round last season before going out to FC United Of Manchester. This season saw Fylde's joint best ever FA Cup run. After beating Stockport County, Coleshill Town and Barrow, they made their third ever appearance in the FA Cup 1st Round as they travelled to Millwall. They lost 3-1 and ironically would have been at home to Wycombe had they prospered. Plenty of local trophies have been won, none less so than in 2013-14 when they captured the NPL Challenge Cup, NPL Presidents Cup and the Lancashire FA Trophy. 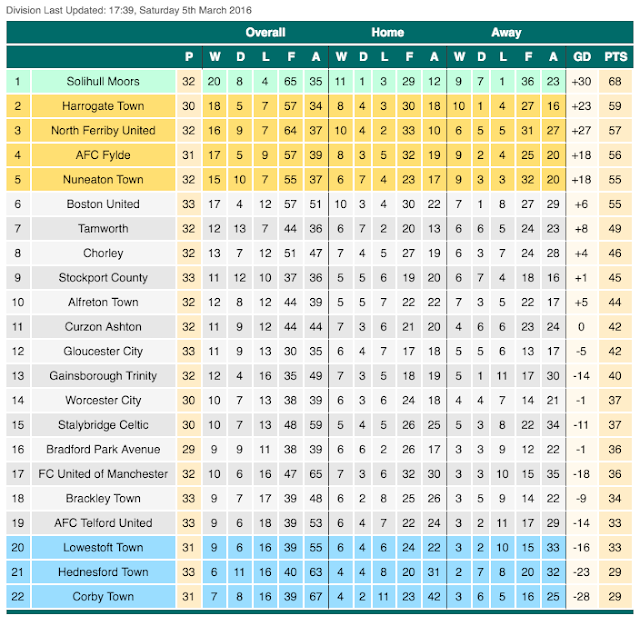 I'd wanted to go to AFC Fylde for a while, and time was of the essence if I wanted to visit as the ground was being replaced at the end of the season. I'd had a couple of previous attempts this season but each time the weather had thwarted me. I had a week coming up, but they weren't scheduled to play this Tuesday until I read the Football Traveller last week. This would be perfect for my Tuesday game and so I booked myself a hotel in Blackpool for the bargain price of £15 and Ardwick House actually had good reviews on Trip Advisor too. On the day of the game, I woke at 8am and had just over 2 hours to get ready and relax before leaving at 10.20. It was over 220 miles to my hotel in Blackpool but thankfully the journey was good and I arrived just after 2pm. The Ardwick House won't win any awards for its luxury but it was clean and the welcome was friendly which is all you can expect for £15 a night. It was also well located and so with time to spare I had a stroll into town and after getting various bits in home Bargains I continued my mission to tick more Wetherspoons. The Layton Rakes was a pretty new build, with the prices more than expected for up north but I was delighted to find my favourite Black Dragon cider at 3.25 a pint, 50p more than I paid in Haverhill 10 days ago but still worth every penny. On the way back to the room I felt peckish not having had any lunch. Pound Bakery did the job with 3 big sausage rolls for a quid and I eat them as I listened to Roy Hodgson on TalkSPORT drive time, talking about England's chances at Euro 2016. Plans were made for a trip to Prescot Cables a week on Saturday. It's a ground I've wanted to visit for a while and as a couple of mates have got tickets for the Everton v Arsenal game, I will be getting big help with my petrol costs. I chilled in my room, watching The Chase and browsing the Internet before leaving just before 6.30. It was only a 20-minute drive to the ground and after parking up I went straight in costing £12, plus £2 for a programme. 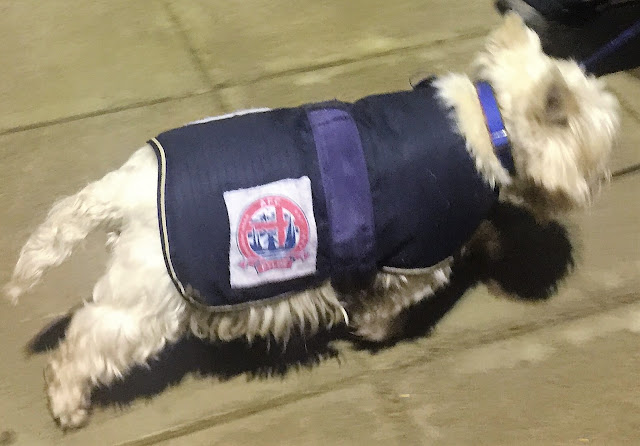 First port of call was the club shop where I got a pen for £1. I then went to the bar and had a bottle of crushed red berries Bulmers which was quite expensive at £3.80. I spent pre-match reading the programme which was well presented with lots to read and was good for the asking price. I was feeling peckish again as kick off approached so I got some chips and gravy from the tea bar and these were very decent. I noted that fellow hopper Shaun Smith of the 100 Football Grounds blog was in attendance, it's the third time in recent times we have been at the same match, despite living 250 miles apart. The game started in an end to end fashion and both sides spurned simple chances. Despite Fylde looking the better side, Corby didn't look like strugglers. They were up against it on 42 minutes though, going 1-0 down. A period of dominance from the hosts ended with a low cross being sent in from the left and club top scorer Danny Rowe was there to finish from close range. Fylde started the second half well on top and should really have extended their lead as they missed plenty of chances and Corby were offering little. They did start to have some chances with 10 minutes to go but couldn't fashion anything clear cut and the hosts looked dangerous on the break, missing a chance to wrap it up with 7 minutes to go. Just as they looked in danger of becoming victims of a late equaliser Danny Rowe got his second with a piledriver into the bottom left-hand corner to wrap things up in the last minute. Corby got a late consolation as they scrambled in from close range in injury time but it was too little, too late as far as goalscoring was concerned. I listened to BBC Radio Merseyside on the way back and there were some odd results. Chester hammered Aldershot Town 8-2, Prescot Cables grabbed a 5-5 draw at Kendal Town after being 4-1 down and Droylsden lost 9-0 at home to Warrington. It was an easy drive back and after dumping my bag in my room I headed off to another Wetherspoons. Despite walking nearly a mile, I still didn't find a cash machine and had to pop around the corner to get £30 out. The Auctioneer was another nice pub, though amazingly my pint of Black Dragon was 56p cheaper in this one despite the earlier pub being in the same chain. The food prices were a lot cheaper too. Finally, I went to another Wetherspoons, The Velvet Coaster before heading back to my room and going to sleep around midnight. 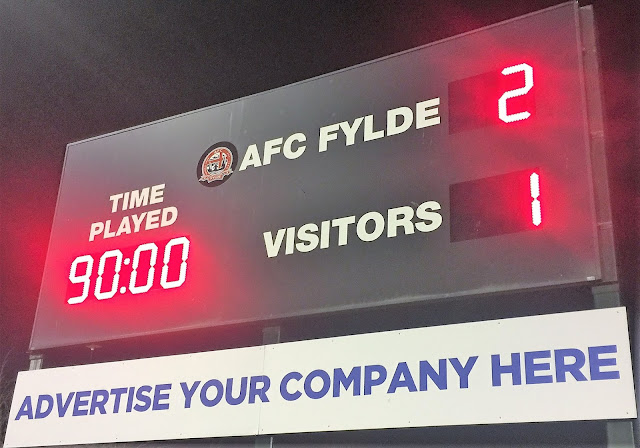 KELLAMERGH PARK is situated on a road somewhere between Kirkham & Wesham as the club offer a free bus service from each of those towns. It has a sort of temporary feel to it, following their quick rise up the divisions but even so it's more than enough for their needs. There are a collection of metal stands comprising of just over 500 seats according to the football ground guide though there looks to be more. Around the same is offered in covered standing while the rest of the ground is open.

Drinking wise, your best bet is the Bisley Arms pub that you pass on the way into the car park. The bar inside the ground is a pretty basic Portakabin type affair. The food meanwhile is decent and good value and there is also a decent club shop, though no old programmes to my knowledge. You'll have to be quick if you want to visit here as it is going at the end of the season and only a handful of games are left to play here. 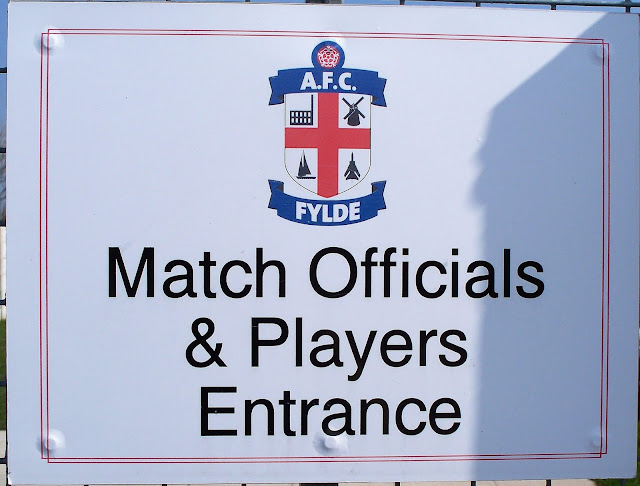 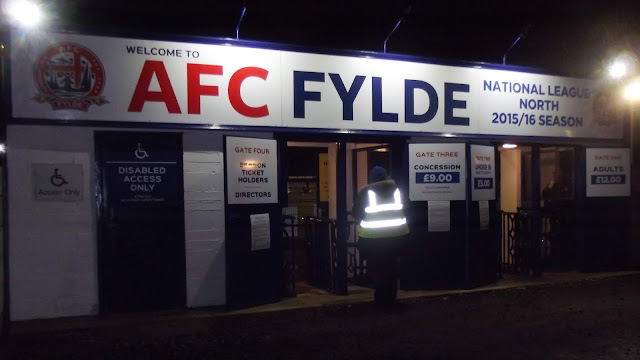 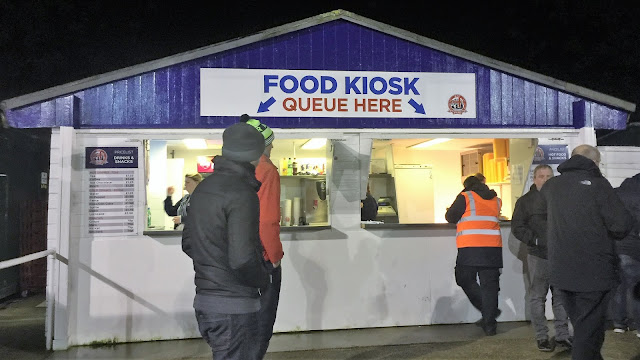 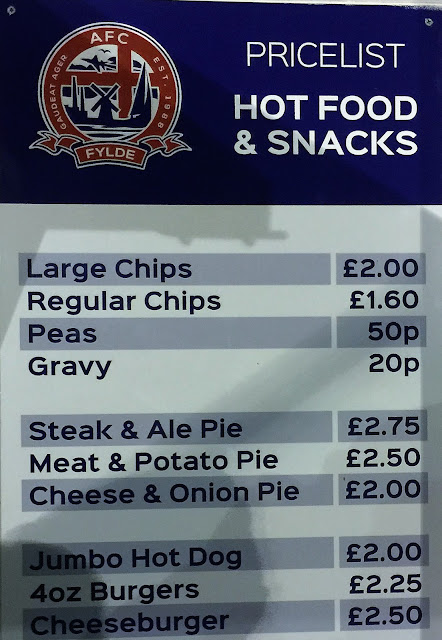 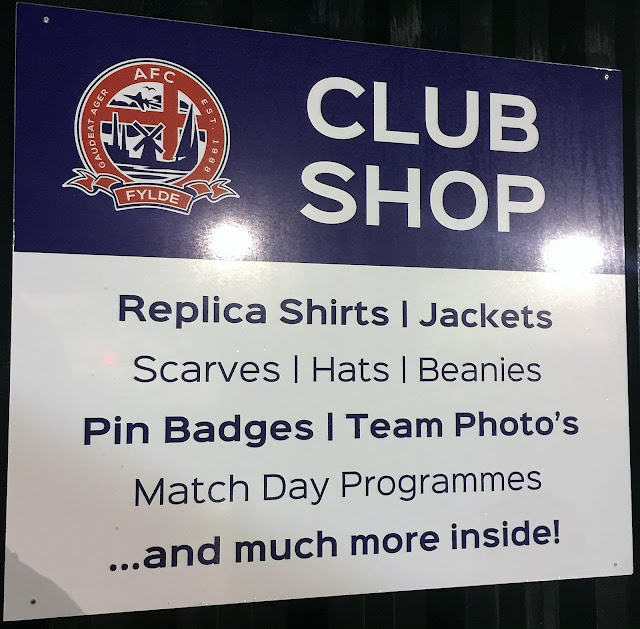 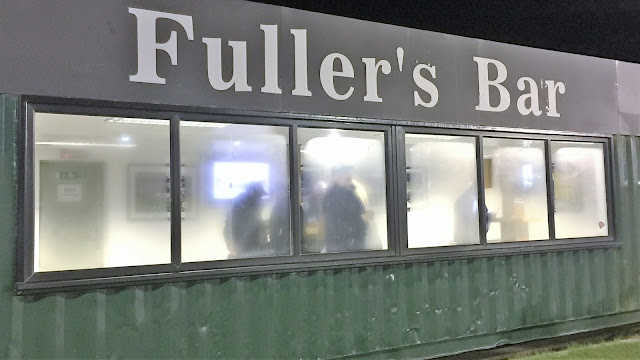 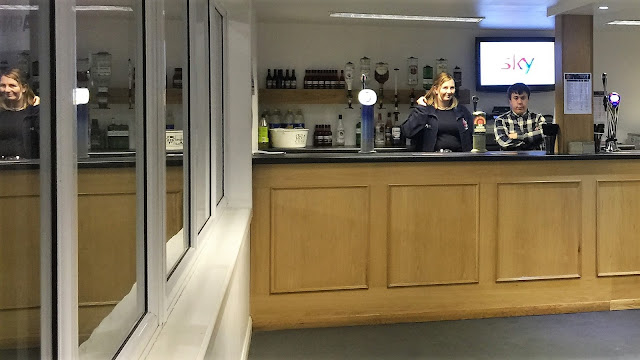 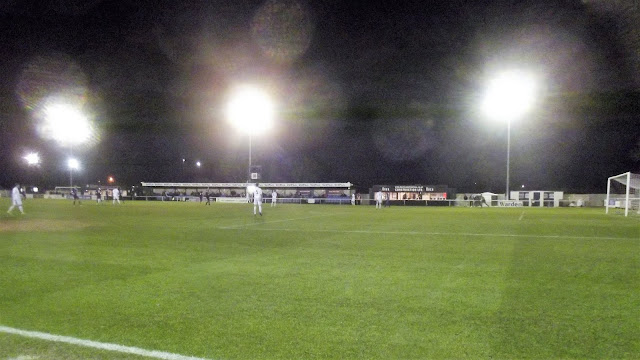 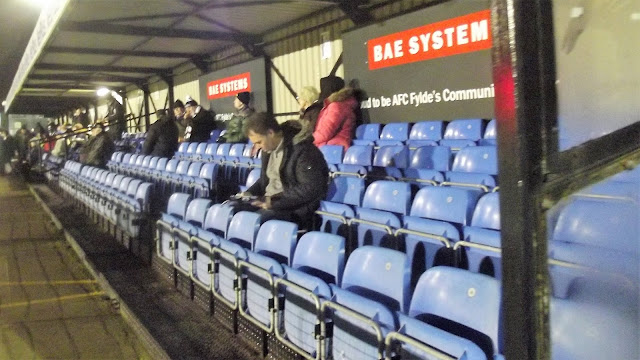 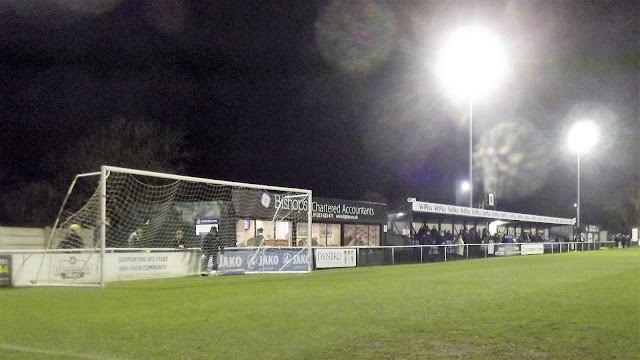 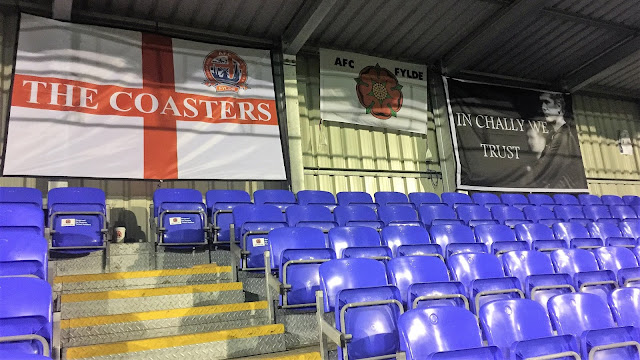 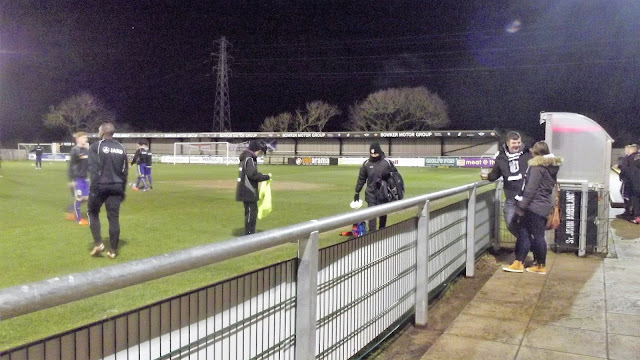 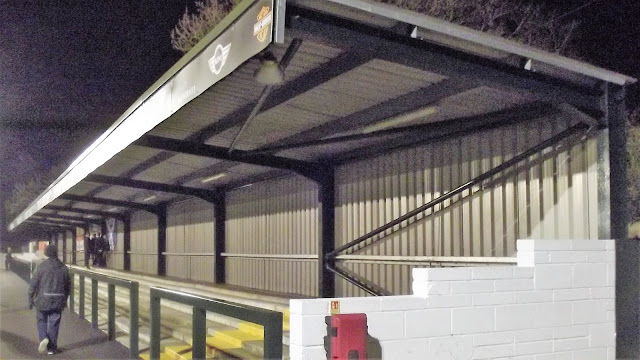 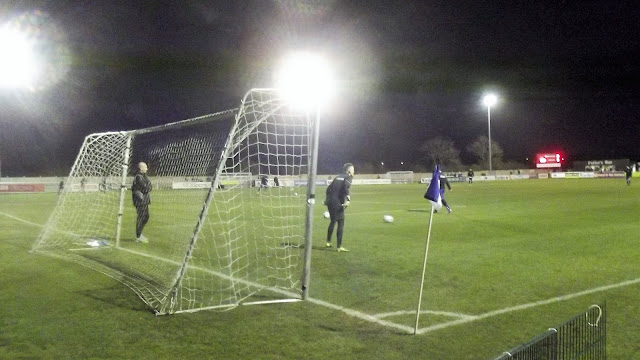 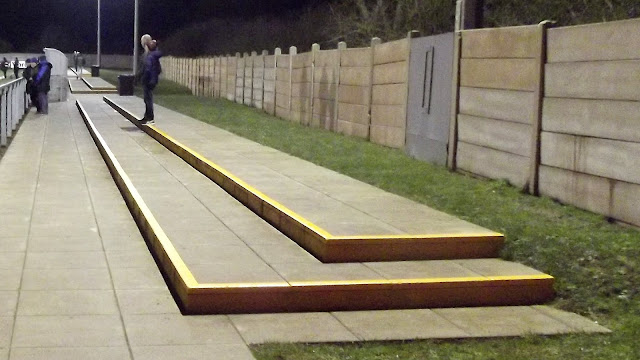 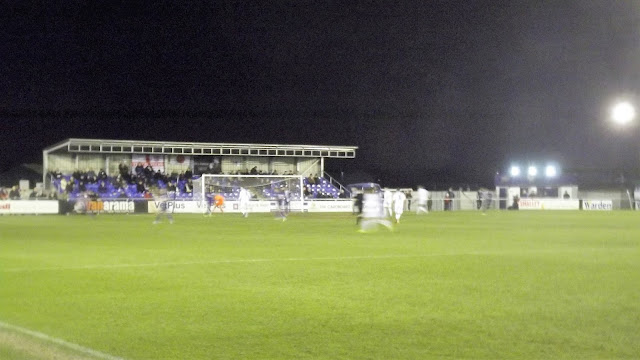 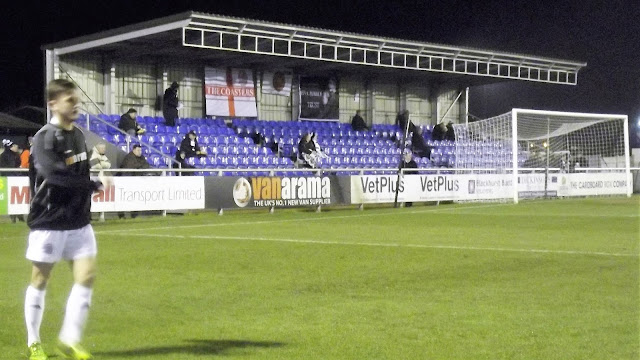