FRIMLEY GREEN FC was formed in 1919. Up until 1981 they played in local leagues such as the Surrey Senior and London Spartan. For the 1981-82 season, they joined the Combined Counties League. For their first season, it was split geographically and Frimley Green finished 7th in the West Division. The following season it reverted to a singular division due to lack of teams. The club remained here up until 1994 when financial issues forced them to resign mid-season and return to junior football. They remained in the Surrey leagues until 2002 when they rejoined the Combined Counties League. They generally found the going tough in the top division, but they kept clear of the relegation zone. It was ground grading issues that caused them to be demoted to Division 1 in 2006 and although things were quickly remedied, they didn't return to the Premier Division until 2013. Despite a 12th placed finish in their first season back, they finished bottom last season and were relegated. Back in Division 1 for this season, they sat 10th at the time of kick off.

The FA Cup has not bought a huge amount of success with the best run being the Preliminary Round. The FA Vase has been a little kinder. In 2008/09 they beat Bookham, Redhill & Binfield before losing in a 3rd Round replay to VCD Athletic. In terms of local competitions they've won the Surrey Intermediate League Cup, the Dan Air Elite Cup and the Surrey Junior Cup. Away from football, the village of Frimley Green also has sporting history in darts. The Lakeside Country Club in the north of the village has hosted the BDO World Professional Darts Championship for the past 30 years. 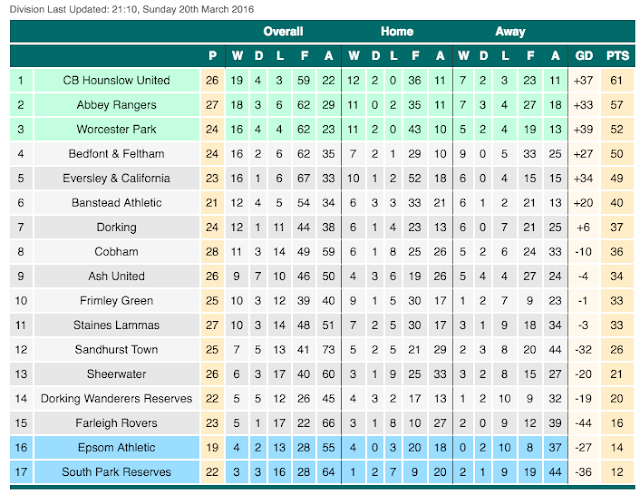 Pretty early on, I sensed that I would be on my own for this groundhop as all the people I usually go with had their own plans, or said they were unlikely to be available. With very little that inspired me unless I fancied spending a load on fuel, I was thinking that a revisit was in order. I eventually picked Camberley Town and was quite looking forward to it as I’d not got any of my own pictures last time, nor had I done much of a blog on it. However, when looking on the Combined Counties League website, I found that Frimley Green were at home to Dorking Wanderers Reserves in the Surrey Premier Cup Semi Final. Ironically Frimley Green were the home side on my only previous visit to Camberley’s Krooner Park as their own ground was deemed to be unfit to host AFC Wimbledon in a Combined Counties Premier Division clash. The travelling Dons won 3-1 on their way to their first ever promotion, having been formed just under 2 years earlier. On the day of the game, I woke to hear of terrorist attacks in Belgium. A number of dad pathetic lowlifes had murdered several people via a bomb, all in the name of religion. I’ve never seen the attraction of that particular hobby, though I respect people who follow their story in a peaceful manner, though not those who take it to extremes. After breakfast and a bath, I did my usual Tuesday walk down town, buying some various things in Morrisons. I came home for the afternoon and was pretty bored as I'm used to leaving for football mid-afternoon. After having dinner I left just before 6. The journey was decent apart from the usual delay around Heathrow on the M25. I  got to the ground at 7.15 though there was no one on the gate and no sign of any programmes so I went in, getting some pictures at first, then going in the bar while I caught up on Facebook. Interestingly enough Frimley Green had played Dorking’s other side on Saturday, losing 2-0. Their own Twitter account was pretty frank about the game, with them reckoning that they should have had a couple of penalties. It’s only a shame all Twitter accounts could not be so honest, but knowing the authorities they’d start stamping their feet and throwing a hissy fit while crying ‘bringing the game into disrepute’ 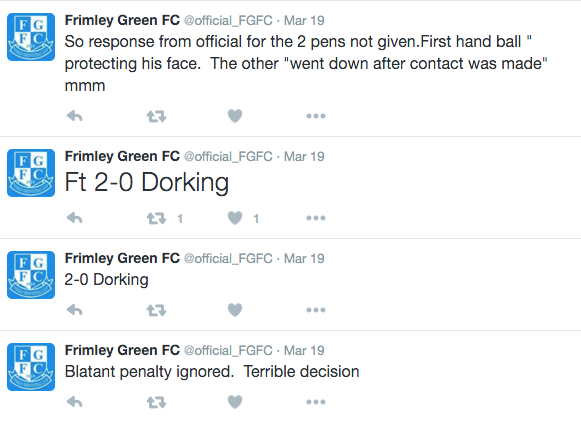 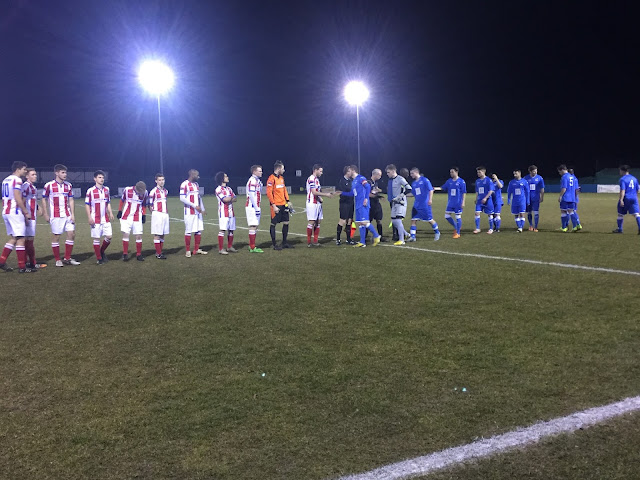 Back to tonight’s contest, league-wise Frimley Green would be favourites, 4 places above their opponents and boasting a good home record as opposed to the visitors' disappointing record on the road. This proved to be the case in the early stages of play with Frimley Green having the better of the chances and the visitors relying on chances on the break. The hosts thought they had taken the lead on the half hour. A smart ball was played across the edge of the 6-yard box and was fired low into the net from the left-hand side but the finisher was adjudged to be offside. Just before the end of an entertaining first half, they did take the lead. A smart through ball set up Cardona for a chance that he gobbled up with aplomb. Despite their manager's great encouragement, Dorking Wanderers couldn't find an equaliser despite their best efforts. Frimley Green will go on to play Nottsborough in the final after the Southern Amateur League side beat Worcester Park in a game played at Carshalton Athletic yesterday. Interestingly enough I'd seen Worcester Park win at Abbey Rangers recently to reach this stage and probably would have been favourites to beat a team that was formed off the back of Nottingham and Loughborough University students meeting and forming a team in London, hence the name. I drove home without any traffic issues, getting back at 10.30. I watched TV until around midnight before going to sleep.

FRIMLEY GREEN RECREATION GROUND is a smart and tidy venue that has seen much improvement over recent years. There are 100 seats on one side, then covered standing for the same amount on the other side. The rest of the ground is open. There is a smart bar which does the usual range and also food on request. I'm not sure what was directly outside the ground but there are some pubs and takeaways within walking distance if you have time to spare. 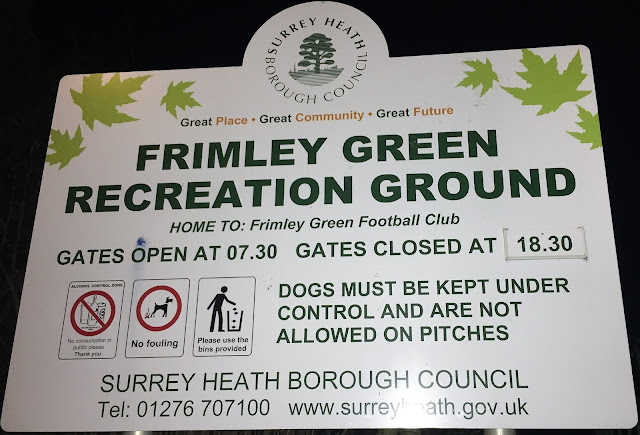 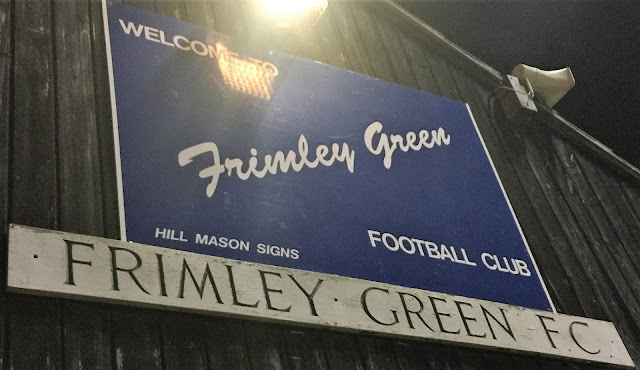 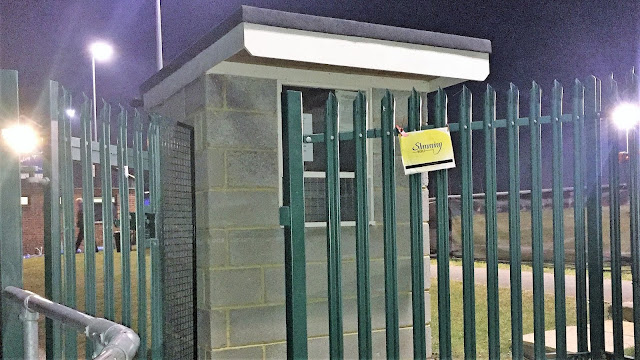 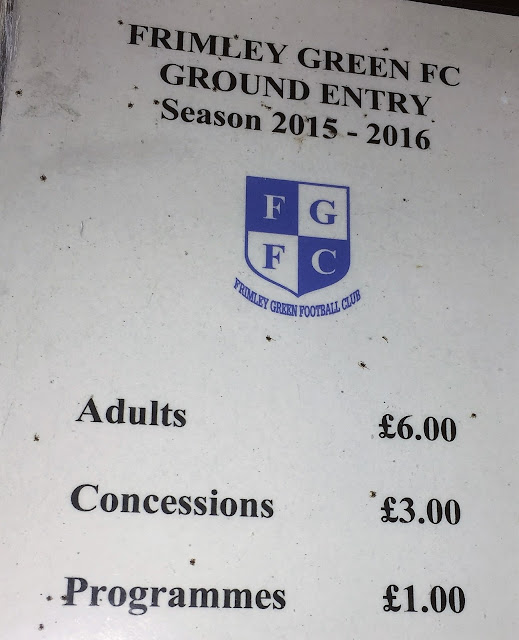 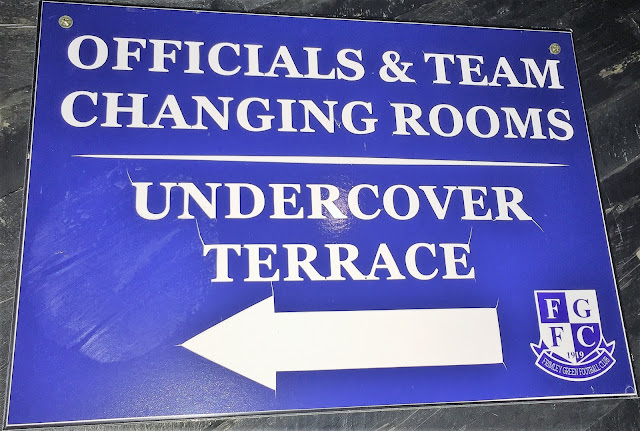 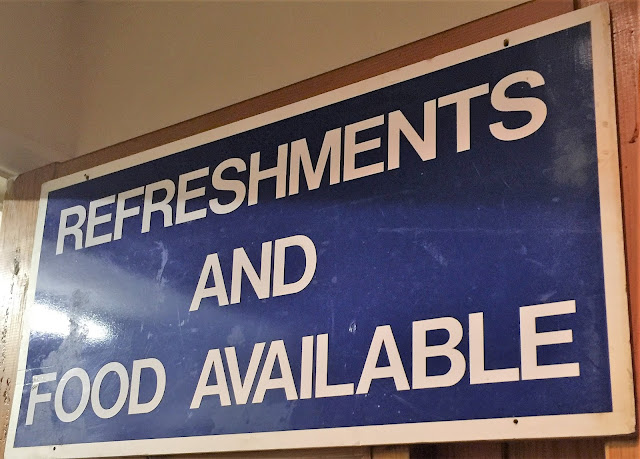 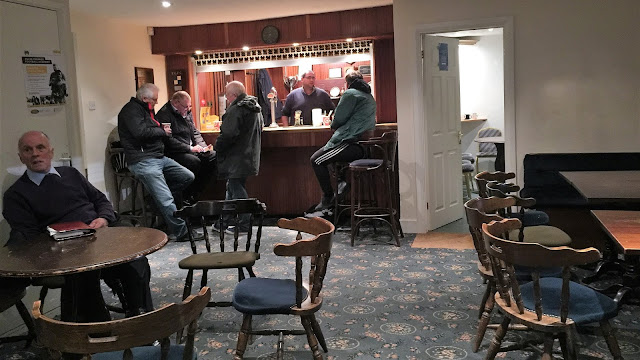 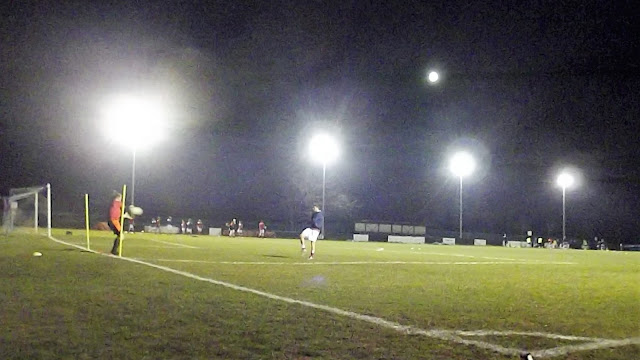 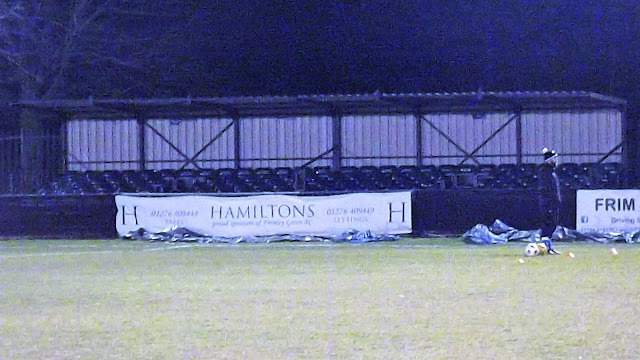 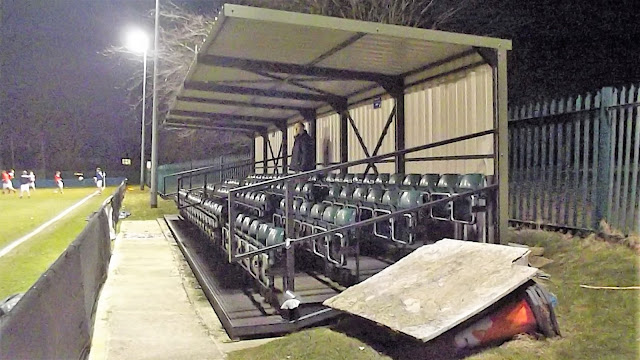 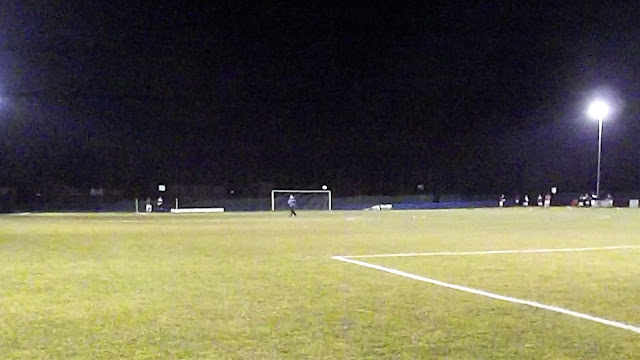 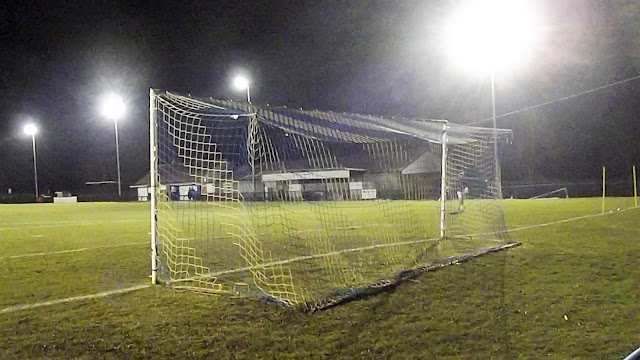 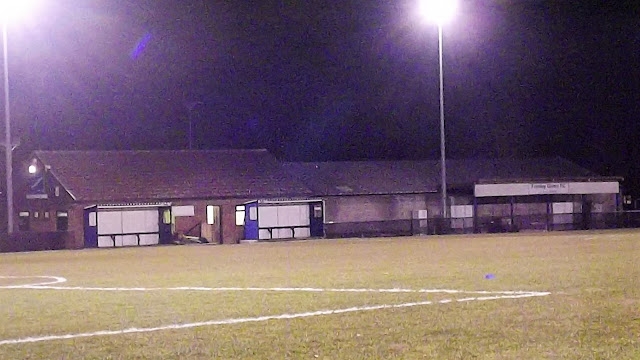 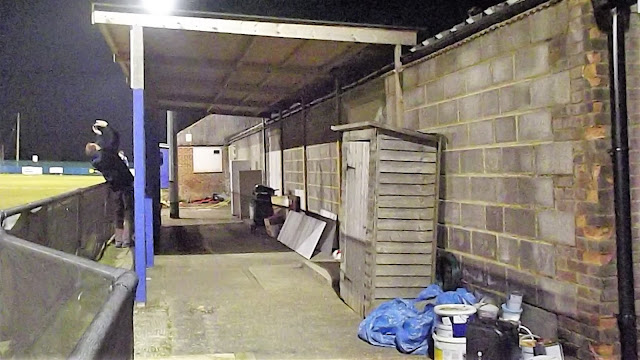 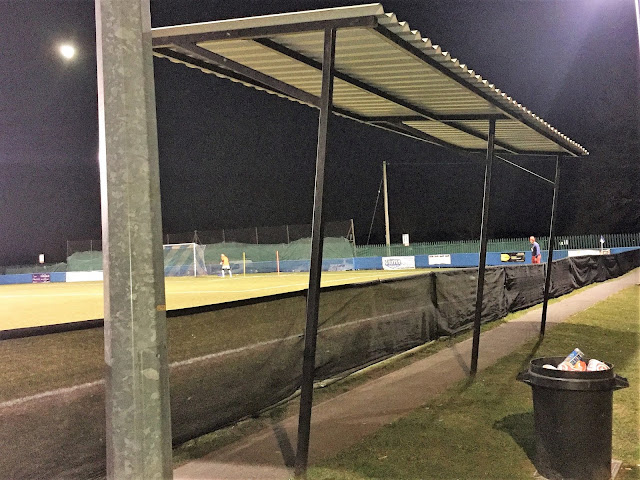 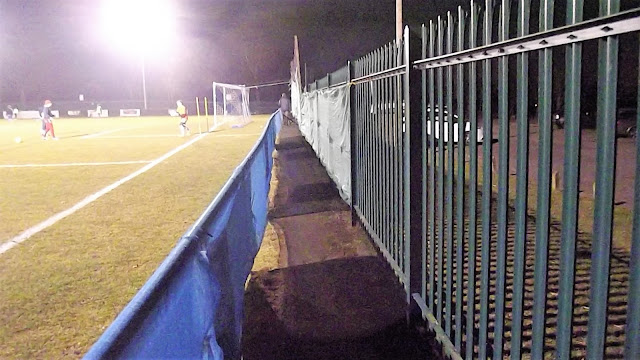