EINTRACHT FRANKFURT was founded in 1899. They won their only Bundesliga title in 1959 and have won the DFB Pokal (German Cup) 4 times, the latest in 1988. After playing in regional leagues for their early years they were founding members of the Bundesliga in 1963 and up until 1997 were unbroken members of the top flight. That year they were relegated to the second tier and have been back up and down a few times since then, spending 6 seasons in the lower division over various spells. They were runners up in the European Cup in 1960, losing 7-3 to Real Madrid, winning the Intertoto Cup 7 years later. 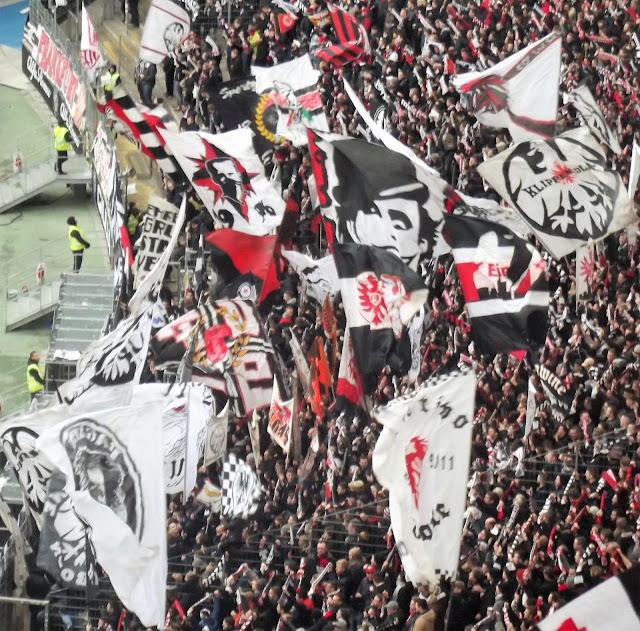 When planning my trip to Frankfurt, I chose my weekend partly on the basis that the biggest club in the city was at home. Though I enjoy the smaller grounds a lot more, I fancied seeing some top-flight action in Germany. Though the ticket, that worked out at £21.50 cost the same as the other 3 games put together, it was still reasonable value compared to the English leagues. For example, I'd paid £20 to watch Cambridge United v Wycombe on Tuesday in the 4th tier and that was pretty much the average for the league, with some costing even more. Having had a good few drinks in the pub the night before, I woke just before 10am the following day, meaning I missed out on breakfast. After having a shower I nipped across the road to Lidl and got myself a few bits to eat and drink before heading straight out again. I had a couple of things to do before I went to the game - to find the luggage lockers at the station and to figure out where I had to get my bus back to the airport from. With all that done I had a brief look around the area before getting the train to the stadium. 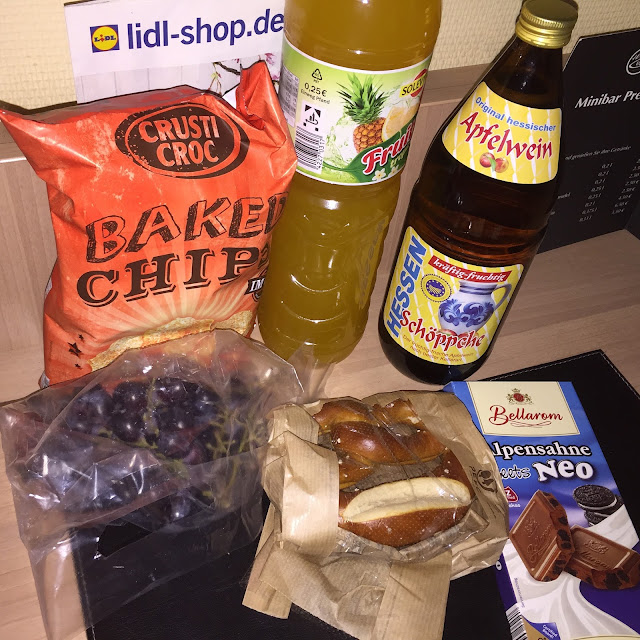 There were plenty of merchandise stalls on the walk from the station to the ground. I got myself a scarf for €5 and had a couple of pints of Applelfwein and a Feuerwurst before I went in the ground. There were plenty of fans who had bought their own cans and the people of Frankfurt appeared to be a massive bunch of drunks who like eating sausages, so I fitted right in straight away, even if my knowledge of the lingo only extended to saying 'thanks'. Inside the stadium was a load of nonsense. Not accepting cash, a 2 euro deposit for a card and another deposit for the plastic glass was not great and left me feeling ripped off not knowing the system. I'd spent most of my cash and had to get some more out from a cash machine inside the ground. In fact, my pint cost me 10 Euros as I hadn't a clue about the rules. Lesson learned though, next time I will eat outside. 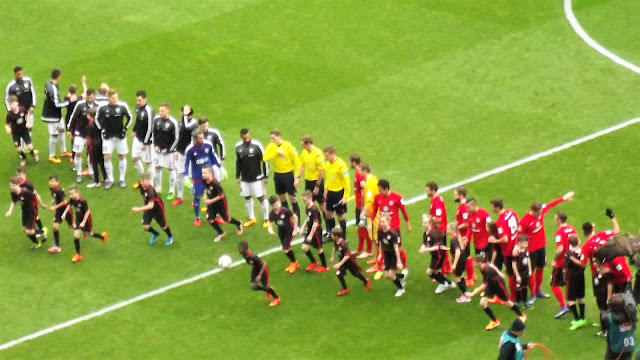 The game wasn't the best. Ingolstadt took the lead in under 10 minutes from the penalty spot and for a long time, it looked as if it would stay that way. However, a header from Marco Russ evened things up on 69 minutes. That was how it ended with Eintracht looking the most likely to gain a winner. The result of the game saw Eintracht's manager Armin Veh sacked in the wake of the disappointing draw. After the game I walked back to the station, standing on a train full of fans for around 20 minutes before it even moved. Changing train at the main station I got back to my room around 7. I decided to have a night in, as I was quite tired. Another trip to the supermarket sorted dinner, and even more Apfelwein completed a very unhealthy day. I fell asleep quite early around 8.30 after watching the Bundesliga highlights and some YouTube videos. 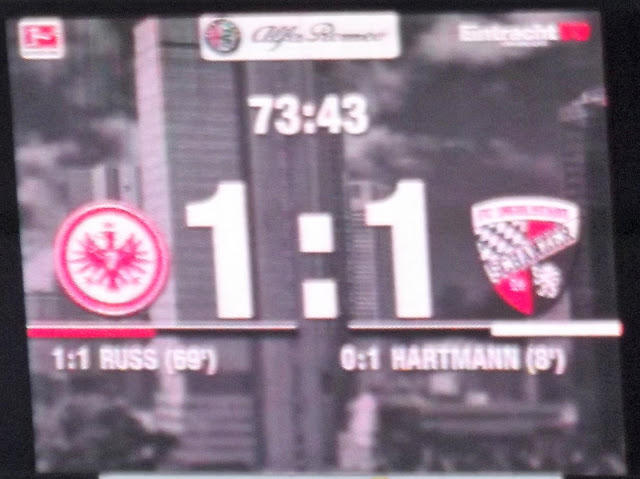 COMMERZBANK ARENA is a pretty smart modern ground with a capacity just shy of 52,000. Views and legroom from seats are all excellent, and there is also a small terraced section. Entry, which seems to be a theme with German grounds gives you access to the whole stadium rather than just your individual stand, with away fans able to mingle with the home support. There is also a club shop and a Museum (entry fee needed) inside. The approach to the ground is set in pleasant woodland, making the walk up a very nice one, similar to the walk along the river to Fulham FC.

Food wise the club, along with several others operate a car system where you have to buy a card for a 2 Euro deposit as they do not accept cash anywhere. There is also a 2 euro deposit should you wish to use a plastic glass, though you can get your money back, a fact that I only realised after the event. With the prices being jacked up anyway, I'd recommend eating outside. There are a huge variety of stalls on the walk from the station to the ground, with the fare being reasonable value and varied choice. You can even bring your own cans and food should you so wish, with various cars being used as impromptu tables. There's also a lot of unofficial merchandise stalls selling a huge range of 'Frankfurt' scarves and I picked one up for 5 Euros. 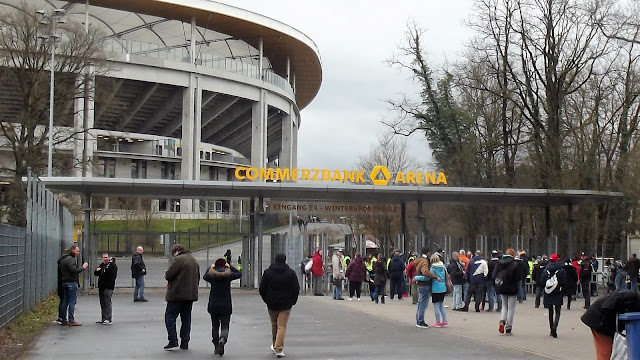 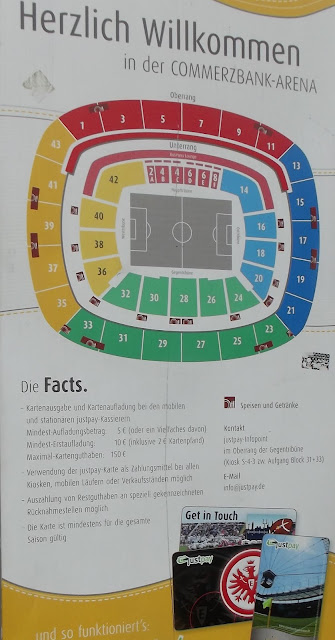 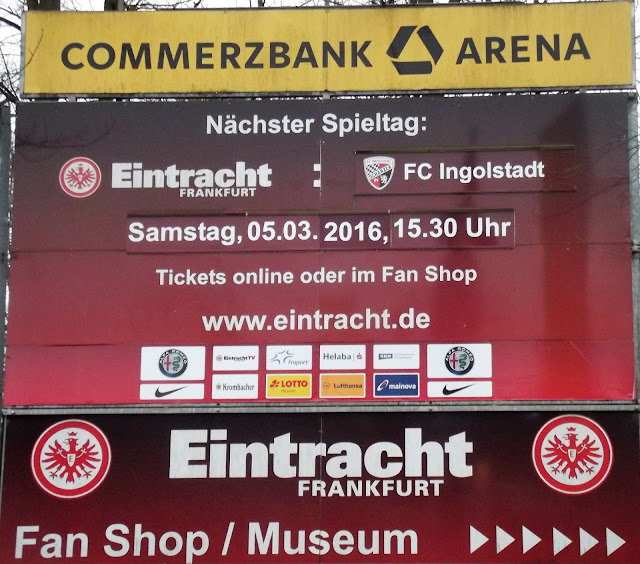 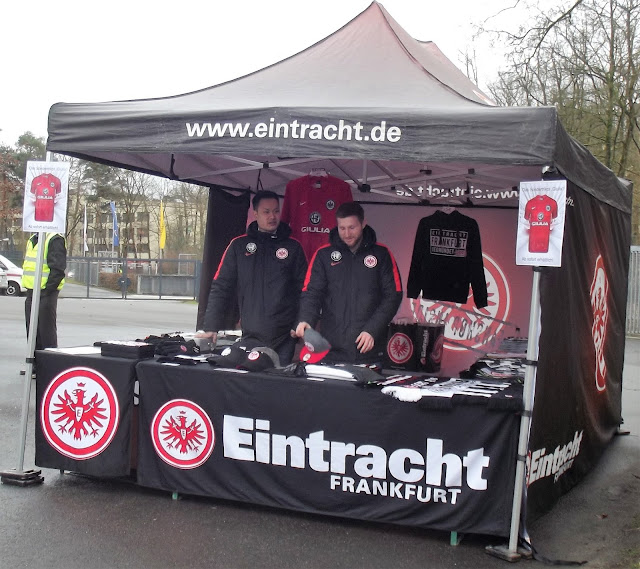 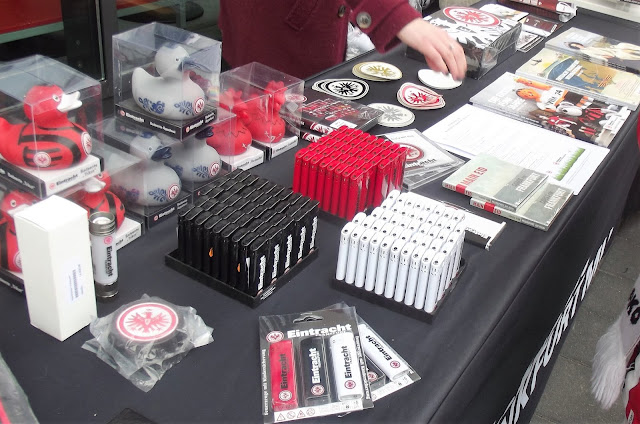 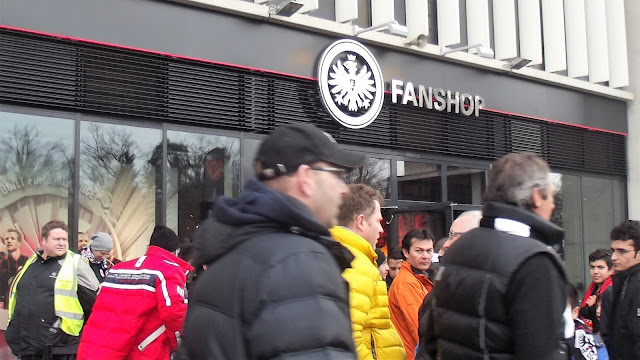 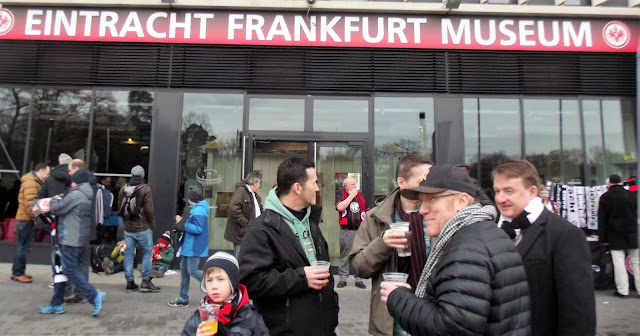 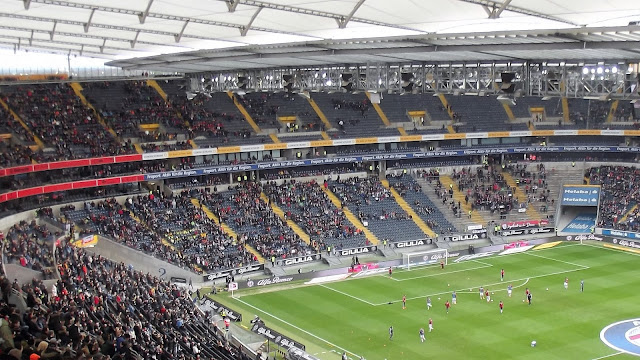 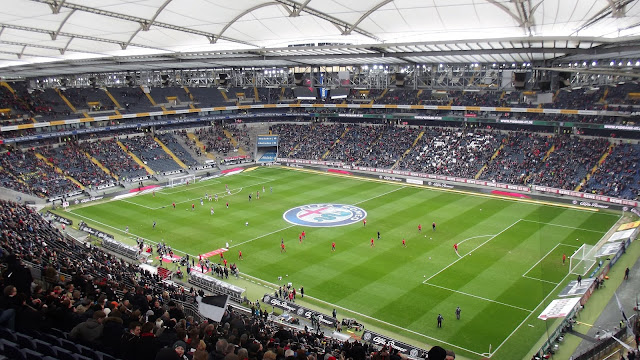 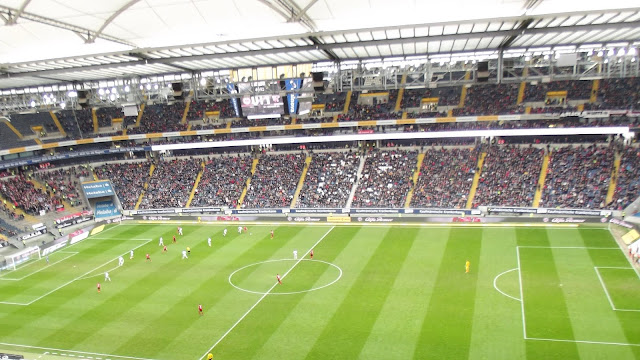 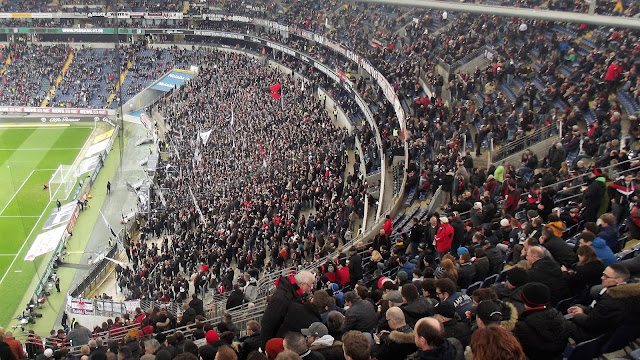 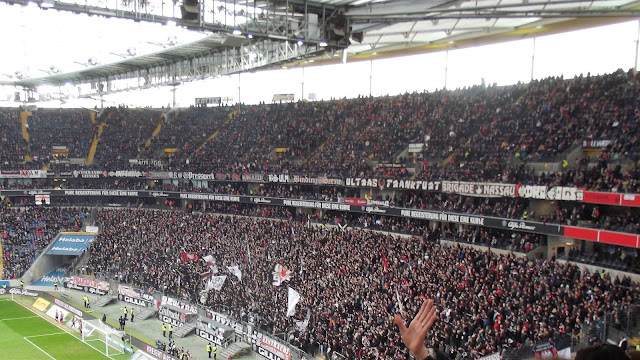 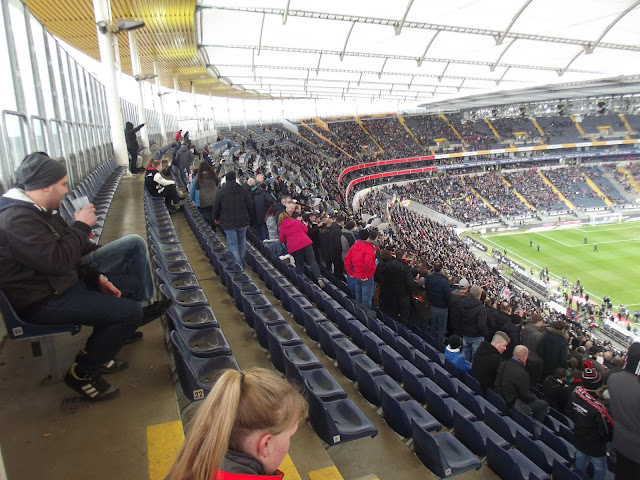 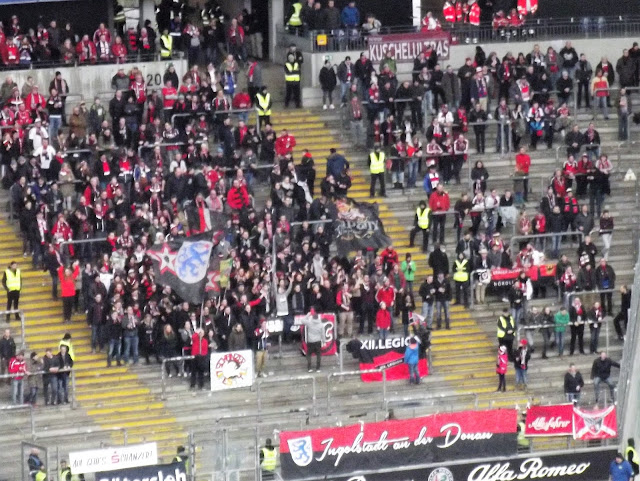