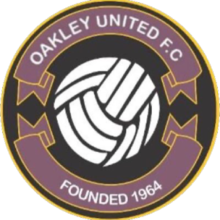 Oakley United FC
Blairwood Park
Oakley
Dunfermline
KY12 9QG
EOSFL Page
Twitter
Ground Number: 1045
Sunday 20th March 2022
Oakley United 2-1 Easthouses Lily
East Of Scotland League - Conference B
OAKLEY UNITED FC - A BRIEF HISTORY
The club was established in 1964 and were long time members of the Fife Junior League, winning it on eight occasions. A restructuring of the leagues followed and they were Scottish Juniors Fife Region Champions in 2001. A third-place finish the following year saw them promoted to the Super League Premier Division but they were relegated to Division 1 in 2008 and then the Central Division in 2009. They redressed the balance soon enough, being Central Division champions in 2011 and then winning another promotion with a 5th place finish the following year. Four seasons were spent back in the Premier Division before another relegation in 2016. In 2018 they joined the East Of Scotland League and have remained in the second tier ever since.
Local cup honours include the Fife & Lothians Cup in 1983, the ACA Fife League Cup in 2006 and the Stella Artois Cup in 2006. They've also won the Fife Junior Cup three times, the Cowdenbeath Cup on six occasions and the Cowdenbeath Cup three times. The village of Oakley was built in connection with the Forth or Oakley Ironworks (1846), now all gone along with the colliery industry. It has a population of just over 2,500. The ironworks, which ceased production many years ago, had six furnaces, with stacks 180 feet (55 metres) high, and the engine-house was built with walls to comprise 60 cubic feet of stone below the surface of the ground. Subsequent to their use in the ironworks, the buildings were used as a sawmill producing rough timber for railway sleepers, fence posts and the like. Comrie Colliery closed in 1986, and the village took many years to recover from this major employer's demise. 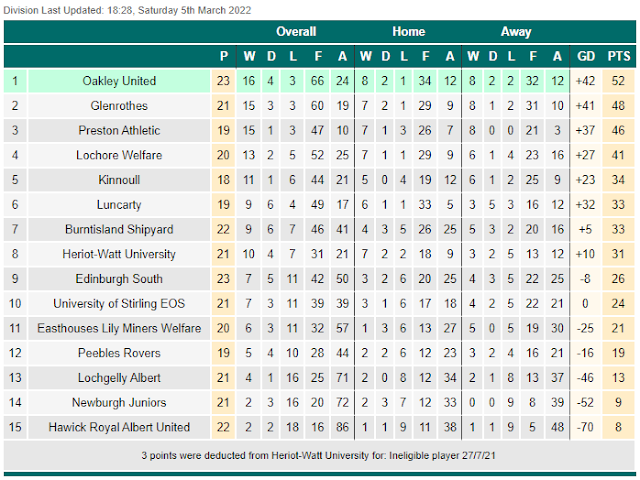 MY VISIT
For the final game of the 2022 Scottish Hop, it was a trip to Oakley United. Unusually for the Sunday game, this was north of the hotel base rather than on the way home. I'd had a late night the previous night, staying up until 3am, perhaps due to the amount of Caffeine in the Dragon Soop that I had earlier. I still awoke naturally at 8am though and it seems that five hours of sleep is enough for me on these hops. I felt perfectly fine and had a shower before getting my things together. I then went down and got some breakfast and as it was busy, bought it back to my room. There was still plenty of time to kill, with it being a lazy Sunday, the worst day of the week, we did not have to leave until 10.15. I started this blog and also looked ahead to Tuesday for which I have not decided a game yet. Hopefully, Anwar will be able to come with me as then my preference will be Stone Old Alleynians which I've started a blog for. I've had two attempts to visit there thwarted - one due to the weather and another due to an issue with my car. If I'm on my own, the favourite will be Hamble Club in Southampton. 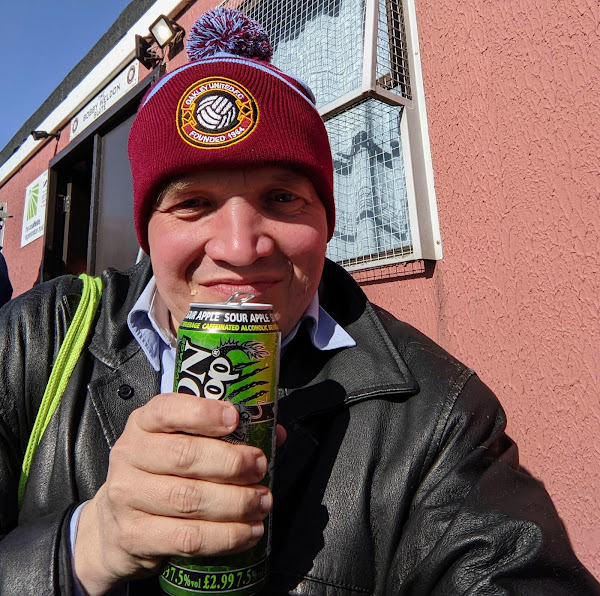 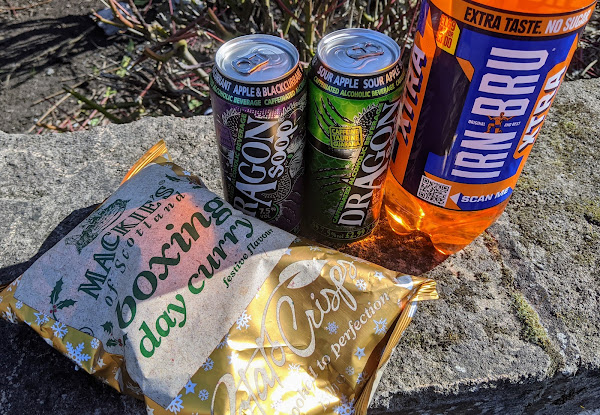 I got my stuff together just before 10 and went to reception. After chatting to some other hoppers, most of us got together for a group photo before getting on the coach for the 10:15 departure. Chris handed out the 'pirate programme' that he had made for the Caledonian Braves game. They'd not been confident about getting theirs printed and so Chris had some made as a backup. His was not as glossy as the official version but had far more to read. We were at the ground just after 11. I made my way to a local shop, Premier Stores, to pick up a few bits. I got two cans of Dragon Soop, a big bottle of Irn Bru and a bag of Mackies Curry Crisps. After getting some pictures of the outside, I went in, buying a hat for £10 and a steak and haggis pie for £2. I'd not bought much from the clubs this weekend, so it was nice to help out. The hat was really nice and I'd decided against buying something similar at Crossgates Primrose, so was glad to get one this time. I chatted to Dan before the game and it was sad that the Hop was nearly over. 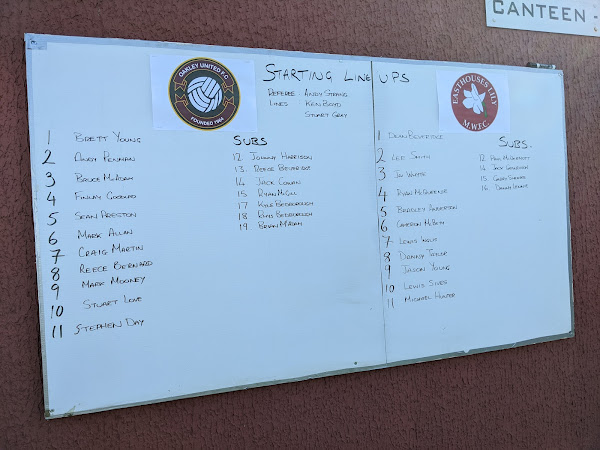 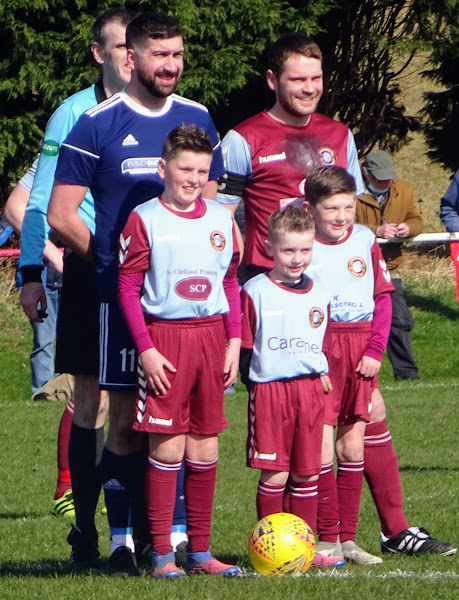 Oakley United were the league leaders. They'd drawn 3-3 at Edinburgh United in the League Cup in their latest game and won 1-0 at Peebles Rovers in the same competition. Prior to that, they'd lost 2-0 at Haddington Athletic in the King Cup. In their last league game, they'd won 2-1 at Preston Athletic. Easthouses Lily sat 11th in the League and on Tuesday had crashed 4-0 to Tynecastle in the League Cup. Due to a string of postponements, their last game prior to that was on January 29th as they were hammered 8-1 at Luncarty which followed a 5-1 loss at Lochore Welfare. Their last win was on January 15th as they won 2-1 at  Hawick Royal Albert United. Easthouses Lily were the better side on but Oakley soon eased themselves into the game. The hosts took the lead on 20 minutes, Stuart Love being given far too much time and space by the visiting defence and he was able to easily place the shot past the goalkeeper. On 38 minutes, Easthouses Lily grabbed a deserved equaliser following a mix-up in defence. It turned out to be an own goal by Finlay Goodlad but not too much blame could be placed on him. Oakley soon went back ahead, a right hand sided corner was put in and Love headed home for his second. The visitors could have had an equaliser right on half time, however, the penalty awarded was well saved. The second half was not as lively but the visitors deserved a share of the spoils but their luck was not in. 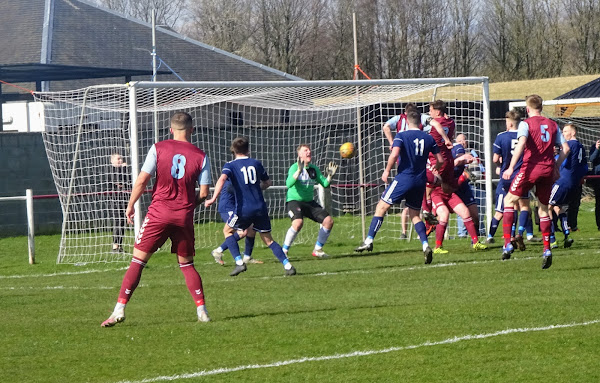 It was with great sadness that I bade farewell to Scotland on what had been a brilliant hop. A Strongbow at halftime and a Magners at full time took the sting off of things and I wish I could have had more but I had to drive in around 9 hours. The hop had been impeccably organised and the last club was probably the most efficient of the lot. There had been plenty of pluses, the only negatives I could think of was plenty of coughing on the coach. Had it not been for Covid, I doubt I'd even have noticed but that's the way of the world these days. The hop had provided people with the chance to tick six grounds in quick succession and had been remarkable value. The only way money could have been saved is on accommodation but I accept that for the practicalities of storing a coach and its drivers, it had to be that way. I'm certainly looking forward to future Scots hops but for now, will have to content myself with a trip to the northeast next weekend. 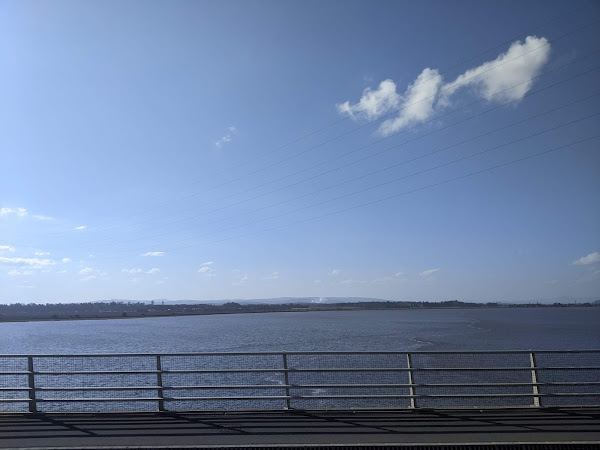 THE GROUND
BLAIRWOOD PARK is a lovely ground in a very nice part of the world. It's fairly basic - a bit of standing cover for around 100 and no seating. There are training lights too which would help in low light. The rest of the ground was open but it had some grass banking for an elevated view. The bar was the best on the trip with a range of drinks at fair prices. Food and merchandise were good also. There's a decent range of convenience stores around the ground and I had to go no further than the Premier to find all that I needed. 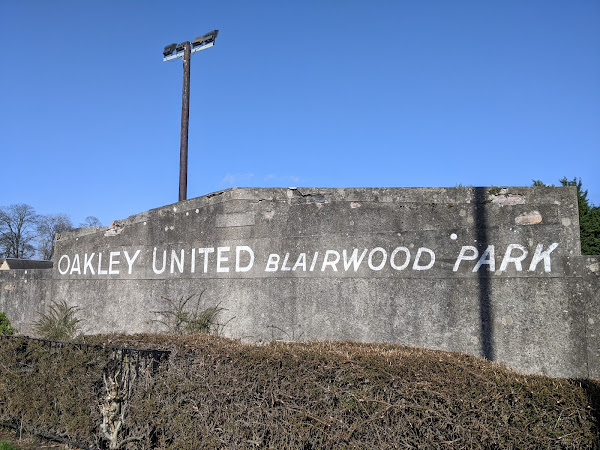 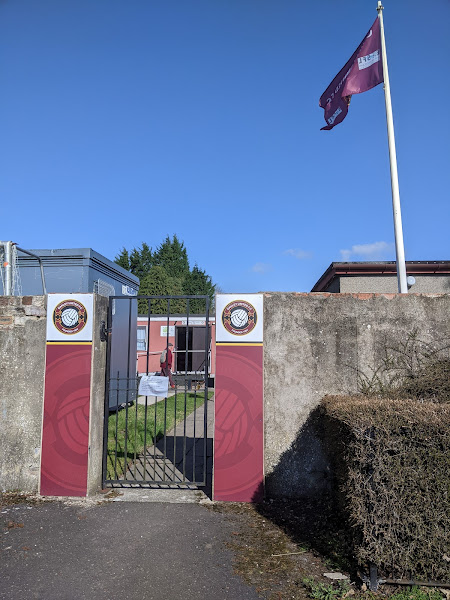 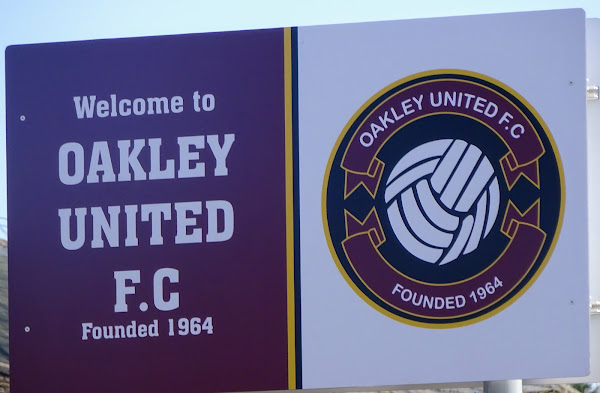 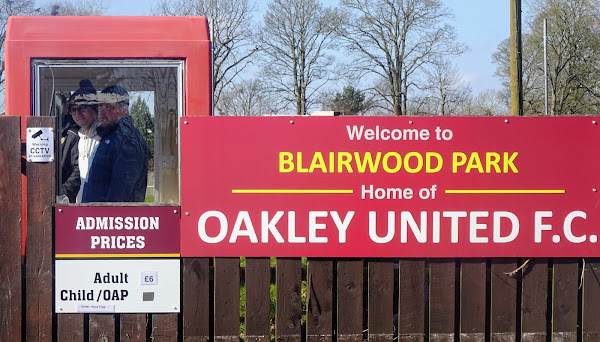 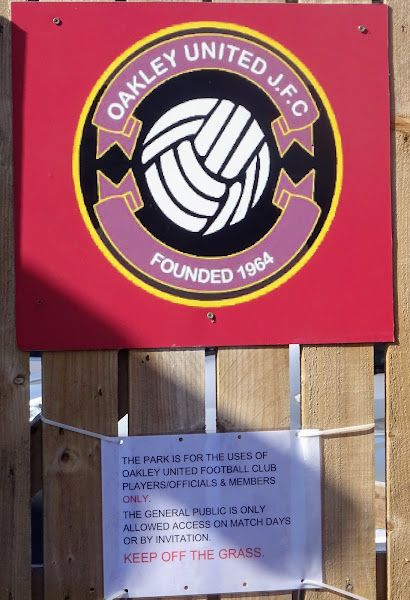 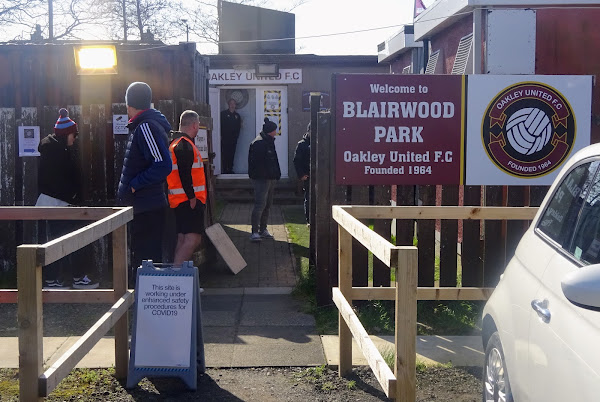 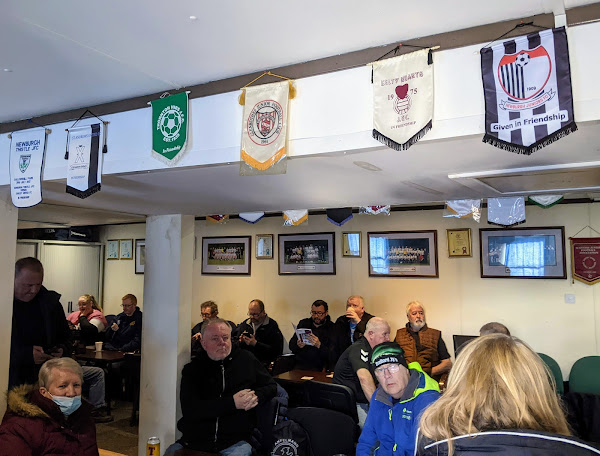 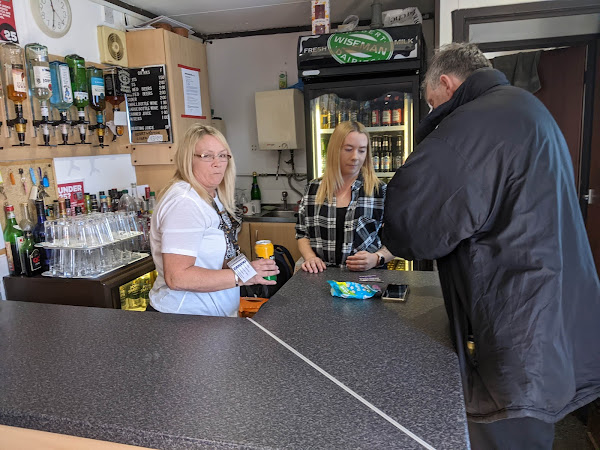 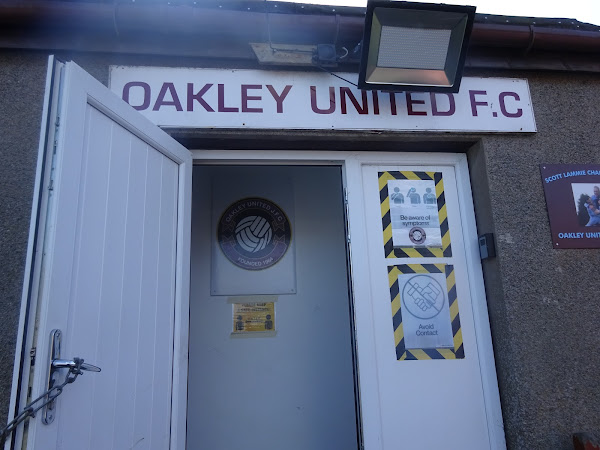 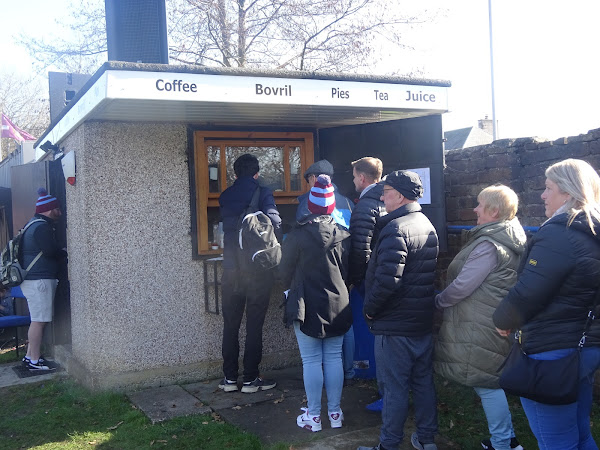 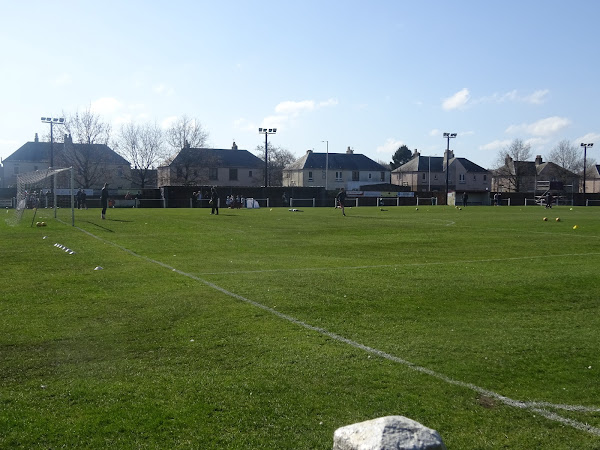 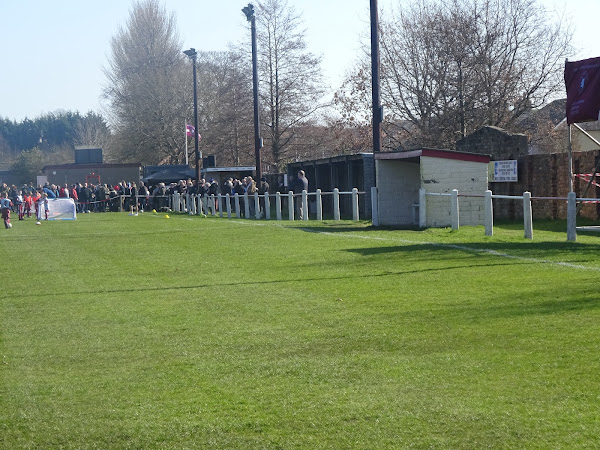 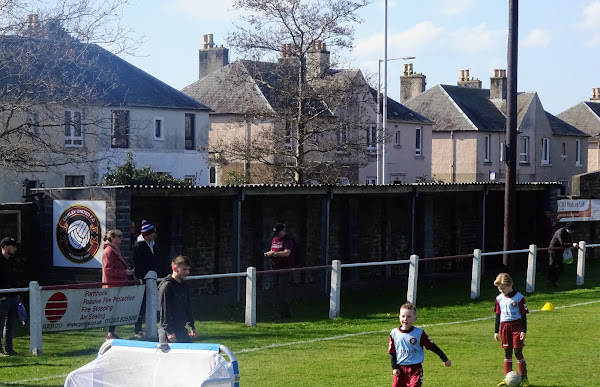 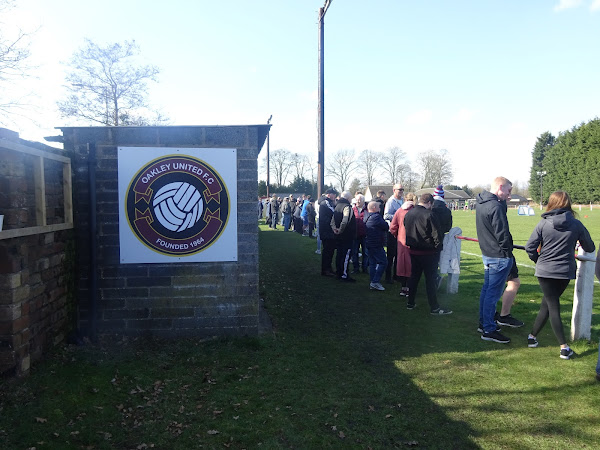 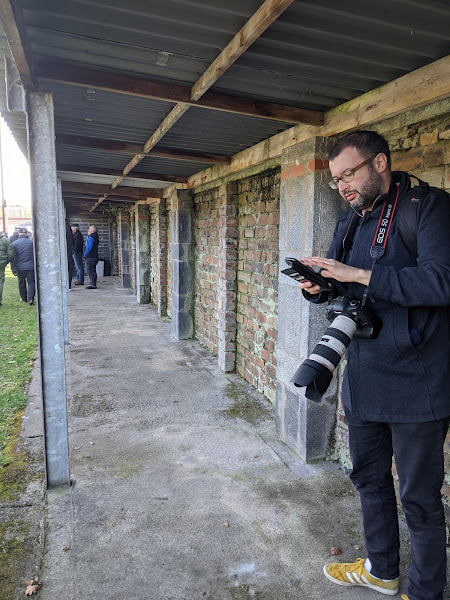 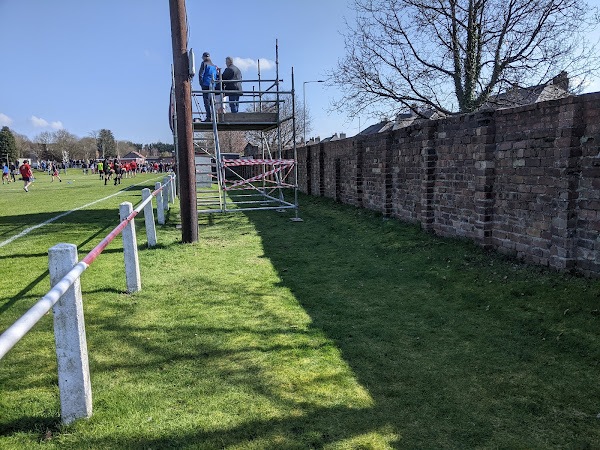 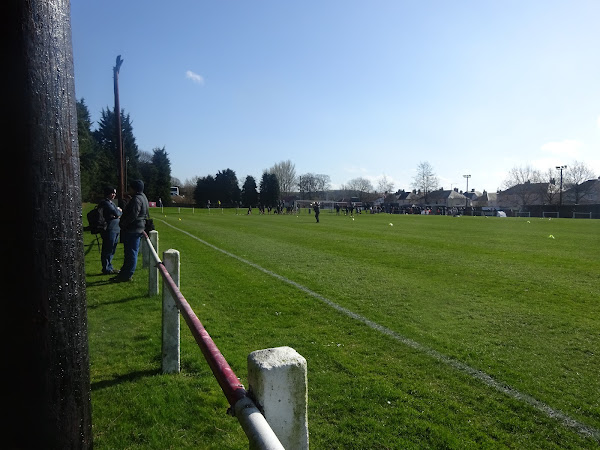 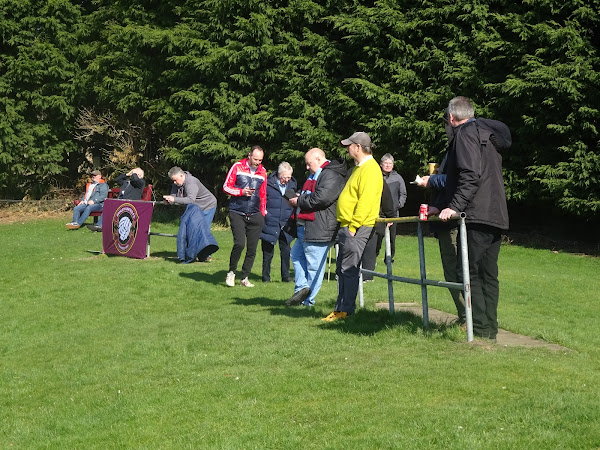 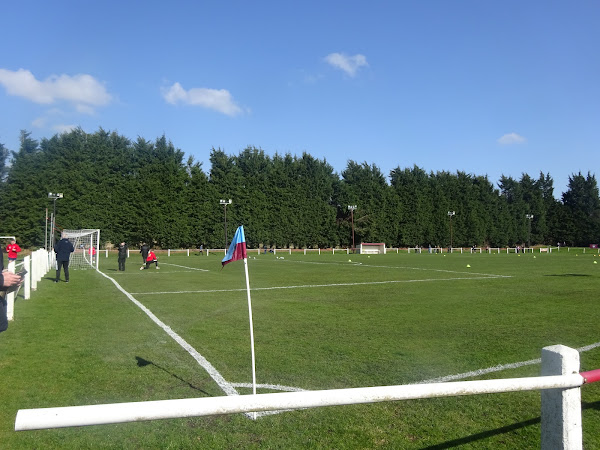 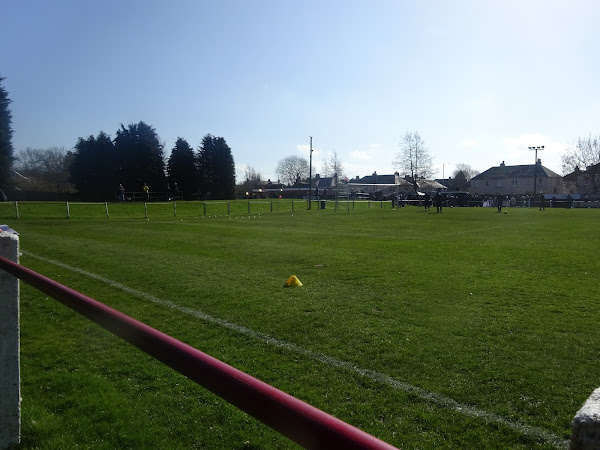 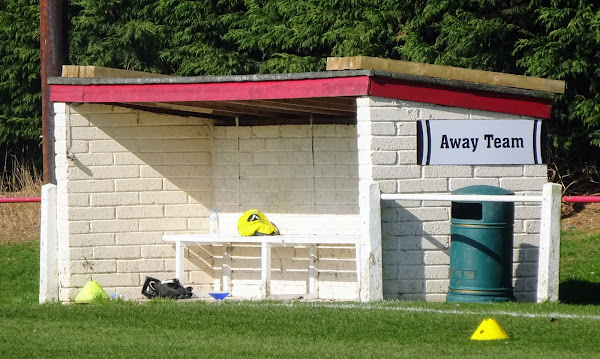