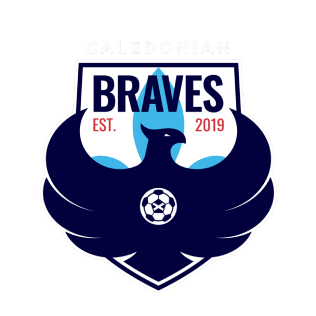 Ground Number 1050
Friday 18th March 2022
Caledonian Braves 1-1 Edinburgh Uni
Lowland League
CALEDONIAN BRAVES FC - A BRIEF HISTORY
The club is a fairly new one, having been formed as recently as 2011 when they were known as Edusport Academy. It was based on a scheme for French footballers to come over and combine studying at Cumbernauld University with playing local football. After playing at Hamilton Palace Sports Ground, they moved to Gala Park in Annan. In 2019, the club moved to its present home, Alliance Park, formerly known as Bothwellhaugh Astro. That same year, they changed their name to Caledonian Braves. They joined the South Of Scotland League at step 6 of Scottish football in 2014, remaining there until they won the league in 2017. This allowed them to join the Lowland League, having previously had their application rejected in 2015. Since joining, their best finish has been 9th, achieved in 2019, though the last two seasons have been abandoned due to the pandemic.
In February 2018, club owner Chris Ewing announced plans to separate the senior team from the academy and attract a fanbase by launching a new online membership scheme, Our Football Club. Members will have voting and decision-making powers, including a say on choosing a new name, crest and colours for the team. They will be able to recommend potential signings but will have no say on team selection. Ewing stated at the launch of the project that his aim was to reach the Scottish Premiership by 2025. In terms of cups, the club has twice reached the 2nd Round of the Scottish Cup. Locally, they've won the South of Scotland League Cup in 2015 & 2016, the Cree Lodge Cup in 2015, the Haig Gordon Cup in 2019 and the Tweedie Cup in 2016. They have an affiliated club, Travancore Royals, based in Thiruvananthapuram, Kerala in India. Founded in 2018, by passionate football entities of Trivandrum city of Kerala, the Travancore Royals FC is India's first and only fans owned football club in the nation. 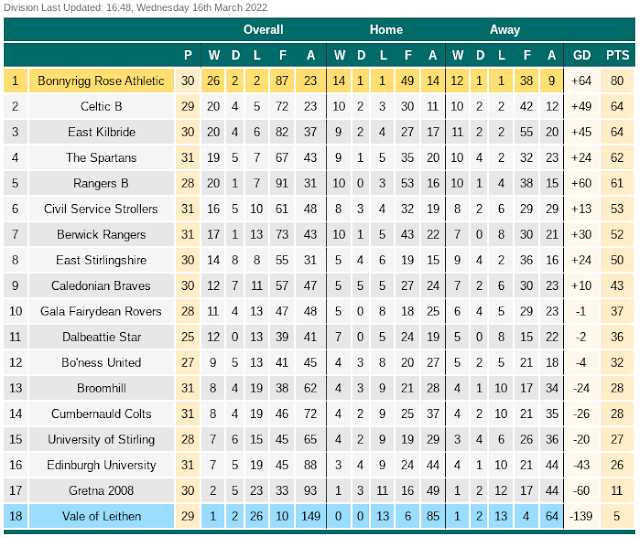 MY VISIT
It had been a quiet week leading up to this hop with only Wycombe games on the footballing front. Saturday saw a dull 0-0 draw against Rotherham United although it was a good point as they were top of the league. Then on Tuesday with walking to town and back in the morning and then back down to Wycombe v Fleetwood, I got nearly 16 miles under my belt. This was undone by plenty of fast food and snacks, as well as a couple of pints but at least I evened things up a bit. The pub was nice as ever but the rest of the evening didn't get off to the best of starts with a mediocre Chinese meal. It was a shame my usual place was over the other side of town. The match wasn't the greatest either with Wycombe hopeless up front until a lucky winner in the fifth minute of injury time by Jason McCarthy. The 1-0 result was harsh on Fleetwood and the attendance was poor too. They gave 3,291 as the attendance but I don't reckon it was even half that. I was just glad that it was the last home midweek of the season as they are rarely enjoyable. I was supposed to be going to Wyberton v Lincoln United Development and got as far as Milton Keynes, only for the game to be called off. Credit to the hosts for making an early decision, it certainly limited the wasted petrol. They'd certainly shown a lot more respect than the weather did, with it hammering down with rain all day, the postponement didn't surprise me. 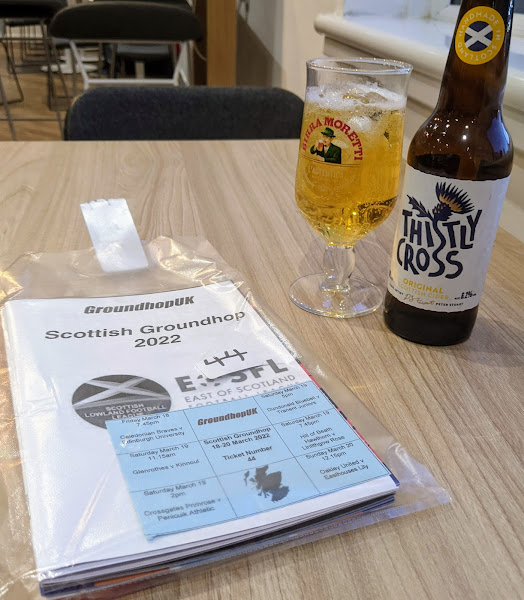 At least I had the all-important blurb for the Scottish Hop come through when I got home. It was a relief to finally get a pick up time as I'd caused the coach to wait for a few minutes last time I did a trip to Scotland. They were kind enough to wait for me and I didn't want to let them down again. I'd been having all kinds of strange dreams in the days before - everything from my car breaking down, to massive gridlock, to a late change of plans that I'd not heard about. So I was sure to allow for plenty of time in case anything cropped up. 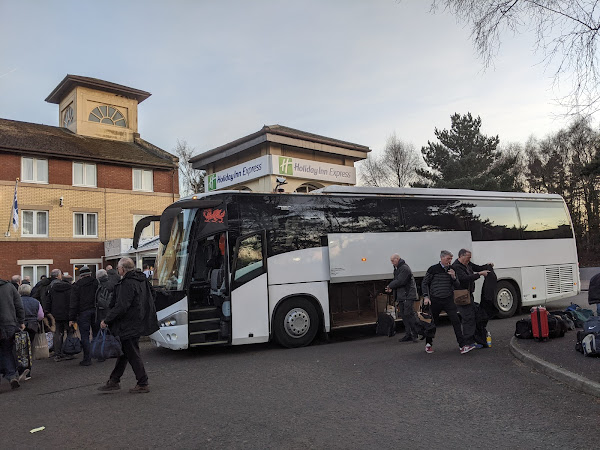 I awoke at 6.30 on the day of the game, 45 minutes before my alarm. I had a freshen up and breakfast but had plenty of time to kill before leaving at 8.10. The journey was decent enough and my parking spot in Lakes Lane was available, though they were closing the road on Monday for gas works. It was a pleasant ten minute walk to Beaconsfield United where we'd been told to meet. Groundhop UK had been good enough to tweet updates and I was informed by Dave that the pickup point had changed to Beaconsfield Services. Luckily, I'd allowed plenty of time as this was another ten minutes walk. I was still there with around 25 minutes to spare with the coach arriving at 9.30. Whilst I waited, there were plenty of people on the booze already, heading to Cheltenham. Why not, you only live once, work hard, play hard is my attitude. The coach was not as good as the last one which had TV but that's a bit old hat now with everyone having their own entertainment. It was comfortable enough for the long journey north and we made our way up, picking up at various points along the way. We had a stop at Knutsford services for half an hour where I got a Greggs Southern Fried chicken baguette and also had a couple of the cans of cider that I'd brought along. This helped the journey go quicker, as did an impromptu quiz which I did OK in. It was still another few hours after our last stop at Foxton to the first game. Chris had kept his cards close to his chest with regards to the hotel, but it was, as I expected, the Holiday Inn right by the ground. There was some beautiful scenery along the way, but really I just fancied another drink after a long journey. Check-in was swift and efficient, as was collecting our programmes and tickets. I had another can back at my room and a bottle of Thistly Cross in the bar before walking the short distance to the ground. Food offerings were basic but a can of Irn Bru and a Scotch Pie was tasty and good value at £2 50. 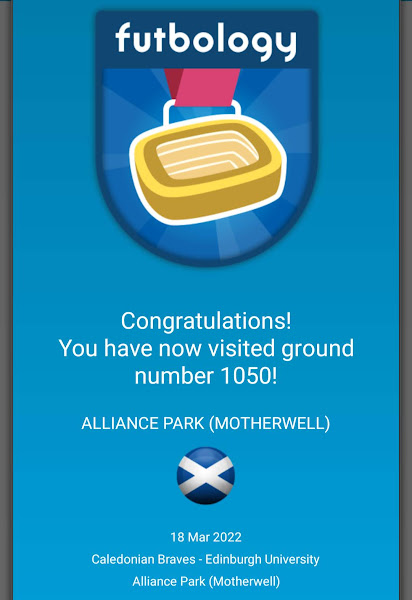 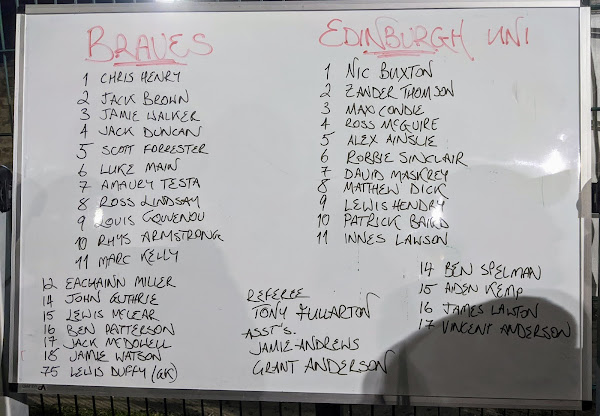 Caledonian Braves were in line for their best-ever season, sitting 9th in the table. Edinburgh University were down in 16th and the two sides had met back in August with Caledonian Braves winning 3-1. The hosts were unbeaten in nine games and had won their latest game 3-0 at Bo'ness United. Edinburgh University were in mixed form but they'd also beaten Bo'ness United in their latest game by a 4-2 scoreline. For this game, Caledonian Braves were in a colourful bespoke shirt whilst Edinburgh Uni were in all red. The game was lively but short on chances in the first ten minutes. The first real chance on 11 minutes saw Caledonian Braves clip the right-hand post from wide out on the left. 20 minutes saw the visitors force a corner following a great shot that was tipped around the post, but it came to nothing. The game descended into a bit of a lull in the second half but Edinburgh Uni went ahead on 75 minutes. A free-kick was played out wide on the left and the ball was put home from around ten yards by Innes Lawson. Caledonian Braves did not give up and right on time, a corner from the right was headed home by Scott Forrester. The game at times looked like it might finish in a goalless stalemate but in the end, it was not a bad contest for the 219 in attendance. 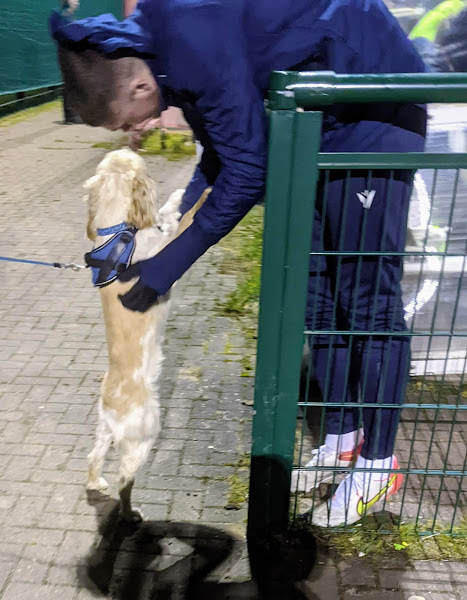 THE GROUND
ALLIANCE PARK is an uninspiring venue, but it's better than most 3G cages. You can walk the whole way around (three sides officially) and there are a couple of metal stands holding around 100. The rest is open flat standing. The catering is simple but good value, Scotch pies and drinks. There was no merchandise or bar that I saw, though there's a Toby Carvery and a Holiday Inn nearby, as well as a free to enter theme park with bar ten minutes walk away. Parking is plentiful. It's probably one best saved for a rainy day but I enjoyed my visit. 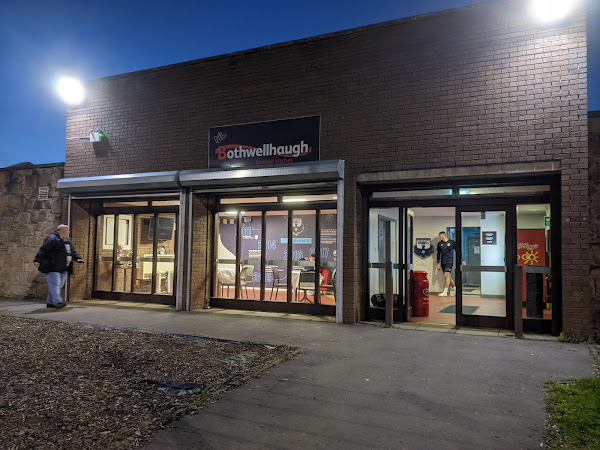 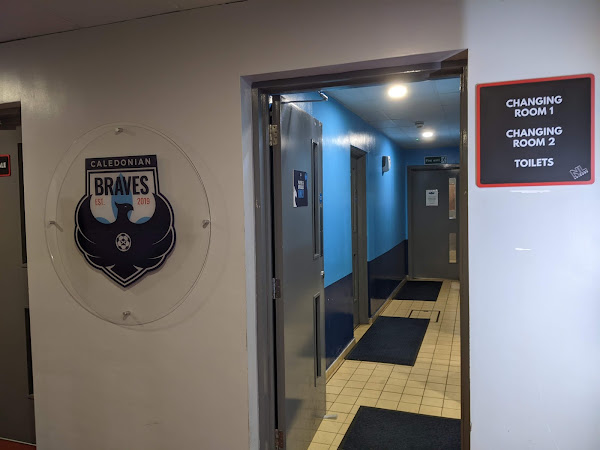 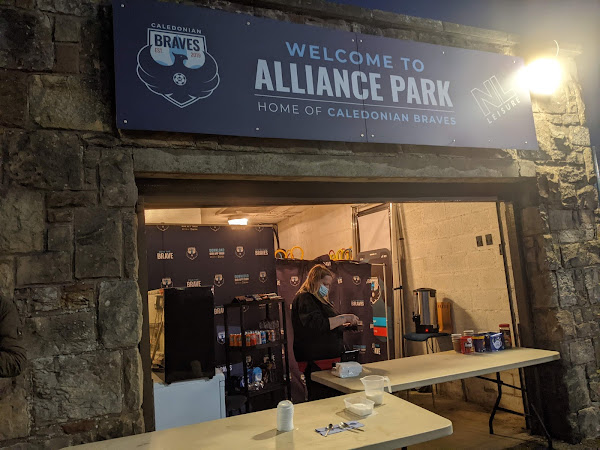 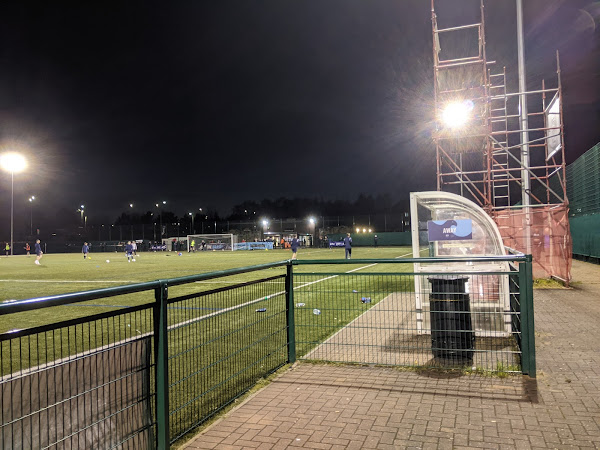 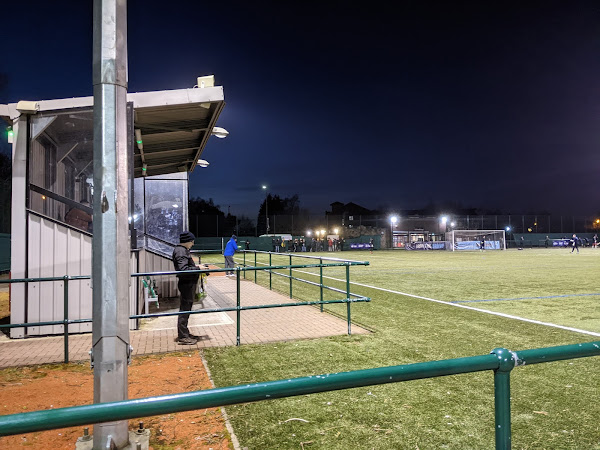 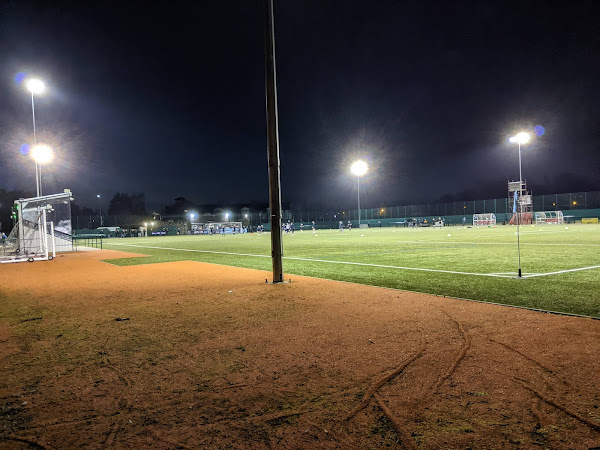 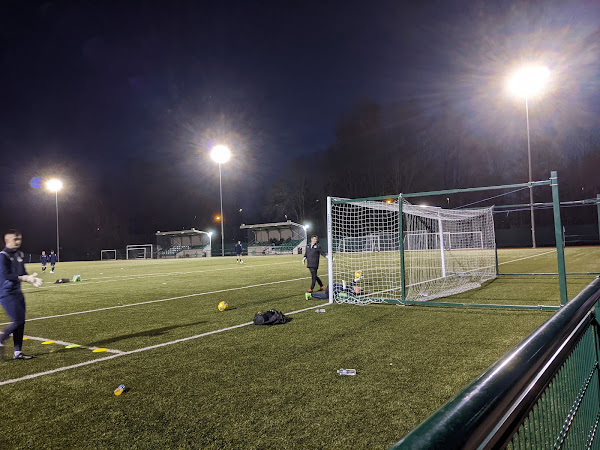 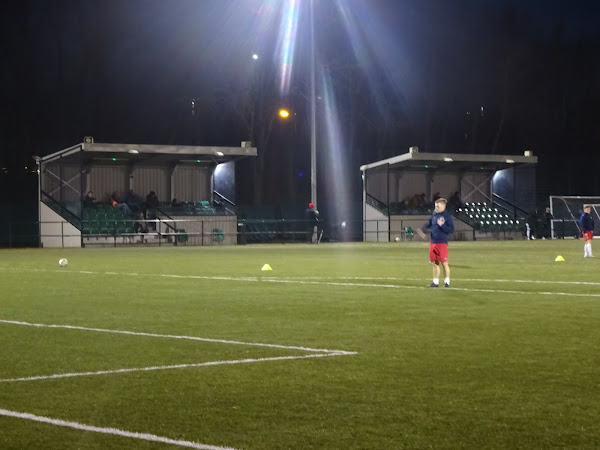 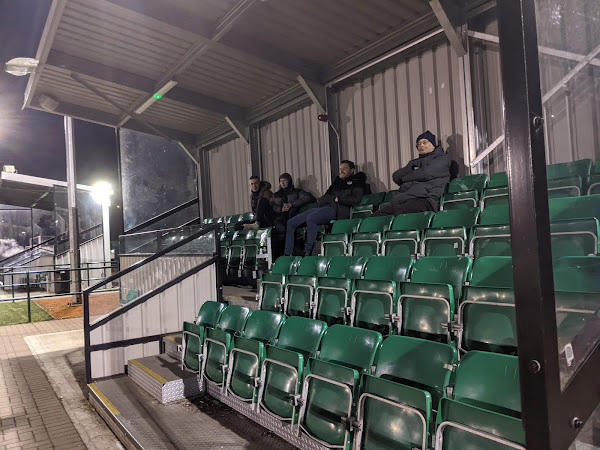 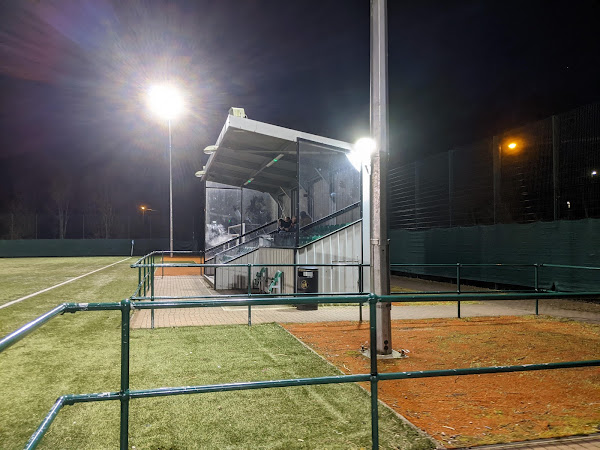 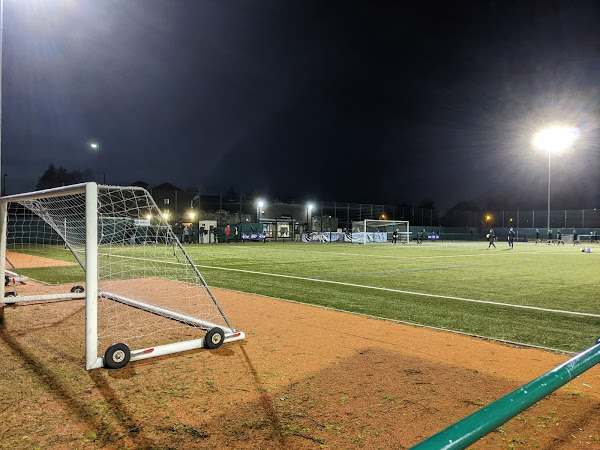 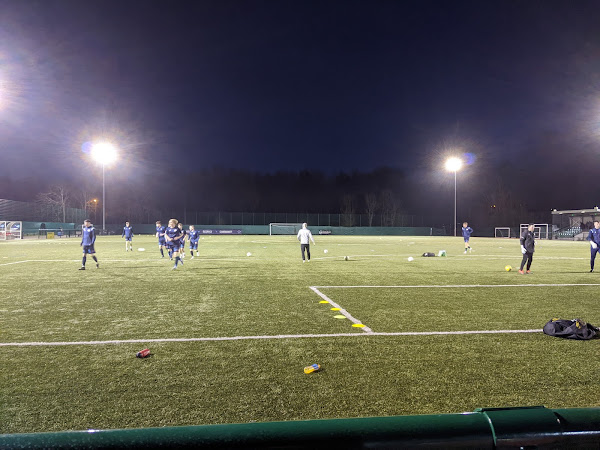 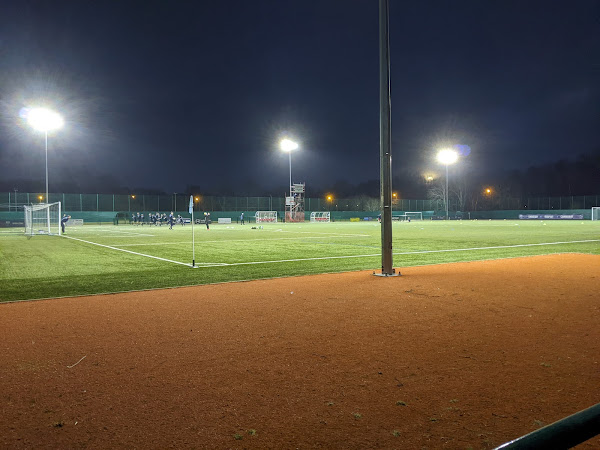