The club was established in 1905 and was known as Nettleham United until 1989 when they adopted their current name. Very little is known about their early history, but they played in local leagues such as the Lincoln & District Amateur League for much of their formative years. In 1987, they joined the Central Midlands League, starting in the Premier Division. In 1990, a third-place finish was good enough for promotion to the Supreme Division. They'd stay there until 2011, their best finish of 4th coming in 1999. After that, they switched to the Lincolnshire League for geographical reasons. They remain there to this day, aside from a brief break during the 2015/16 season. Their best finish came in 2019 when they finished 4th.

Nettleham were regular entrants in the FA Vase between 1990 and 2006. Their best run came during the 1995/96 season when they beat Hall Road Rangers, Louth United & Nantwich Town before a 4-1 defeat to Pershore Town in the 2nd Round. Local honours include the CML Challenge Cup in 2013, the Village Trophy, the Nursing Cup, the Kelly Read Cup, the Blankney Hunt Cup and the Joe Miller Trophy. Well known players for the club include Sam Clucas who played for the club at the start of his career before going on to have a decent career in the Football League.
The village of Nettleham is located around four miles north of Lincoln which has a population of around 3,500. The village is twinned with Mulsanne, Pays de la Loire, north-west France which gives the ground its name. Rugby, tennis and cricket is also played there. The village's prominent landmark is the All Saints Church. Within the church's graveyard is a headstone in memory of Thomas Gardiner, a post-boy murdered hereabouts by two highway robbers in January 1733. The inscription declares he was 'barbarously murdered' aged 19. The robbers - two brothers by the name of Hallam - committed another murder near Faldingworth before being arrested. They were convicted of murder at Lincoln and executed at the site of their crimes. Thomas Gardiner's headstone declares he was killed on 3 January 1732 since at the time Britain used the Julian Calendar. 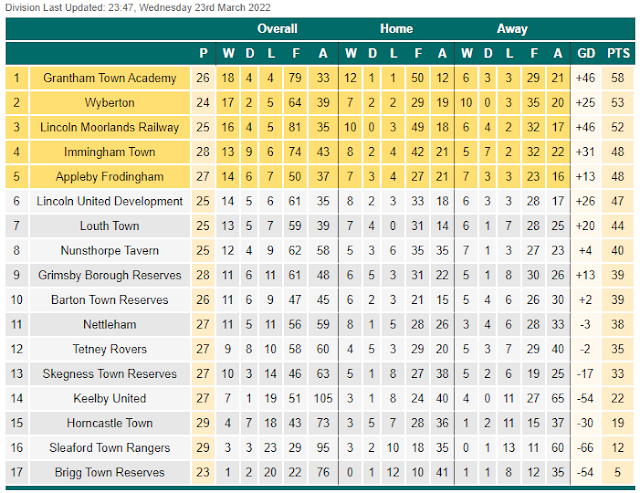 MY VISIT
It had been well over a month since I had done a game with Milton Keynes based hopper Chris. As the only real days, we can do a game together are Wednesday or Friday, options were extremely thin on the ground. Especially when there are so few clubs willing to experiment with Friday night football and not many clubs playing on Wednesday. Those that did, we had visited already, aside from ones that were a long way away. We'd been due to do a game in Lincolnshire last week. I'd spotted Wyberton's ground when visiting Boston United last year, having parked my car near their ground and walked up the main road to the game. It was a very basic venue,  but just about worth a visit. They had actually been at home the previous Wednesday, but I opted against offering it as I'd done a groundhop on Tuesday. 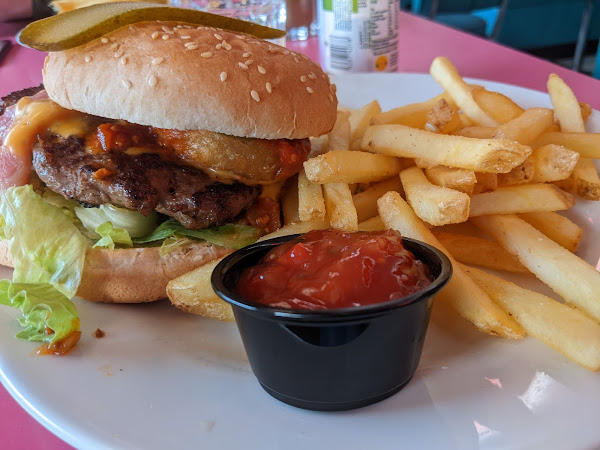 The day of the game came and I awoke around 10 am after a late night on Tuesday. I was having a lazy morning and by the time I'd had breakfast, got dressed and had a bath it was nearly 12. I went out on a walk for an hour before coming back and having some grapes for lunch. I left at 2.30, stopping for petrol on the way. I was with Chris by 3.45 and we made our way to OK Diner in Stamford, getting there at 5. We both went for the 'all the way' burger which had bacon, chill, jalapeños and cheese. It was excellent and the portion was large for the cost of £7. We had plenty of time to kill after, travelling for an hour and getting to the ground an hour before kick-off. 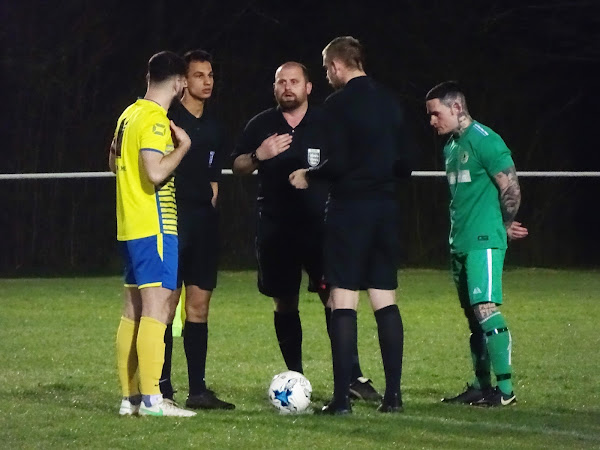 Nettleham sat in the mid-table position of 11th. They'd been in disappointing form, having beaten Louth Town 3-2 and basement side Brigg Town by the same scoreline. They'd gained a point in a 0-0 draw at Appleby Froderingham. Aside from that, they'd lost 4-1 at Tetney Rovers, 3-2 at Lincoln Moorlands Railway and 3-1 at Sleaford Town Rangers. Wyberton were 3rd in the league and in decent form. They had won their latest game 2-0 at Nunsthorpe Tavern on Saturday and had also beaten Skegness Town Reserves 3-0, Tetney Rovers 4-1 and won 2-1 at Lincoln United Development. They'd lost 4-1 at Louth Town and at Appleby Frodingham in recent times. The hosts took the lead on 7 minutes, Jack Higginson heading home a free-kick from the left from around six yards. Wyberton equalised on 13 minutes when a long ball over the top was controlled by Oliver Drummond before he finished with a low shot from just inside the area. The visitors went on to have the better of the first half but didn't create many serious chances. On 59 minutes, Wyberton were awarded a penalty for a foul which was converted. They confirmed their win in the last minute in a similar fashion to the first, scored by substitute Charlie Pugh. The attendance was around 55 and we had a reasonable journey home with me dropping Chris off and getting home around half past midnight

THE GROUND
MULSANNE PARK is part of the large sports complex that hosts rugby, cricket and tennis amongst other sports. The football pitch is fully railed and has a decent sized stand, although this is currently closed off. It was formerly a seated stand and can only be used unofficially now. There's a decent amount of parking at and around the ground although not much in the way of food or drink options that I could see. Overall, a good setup for the level. 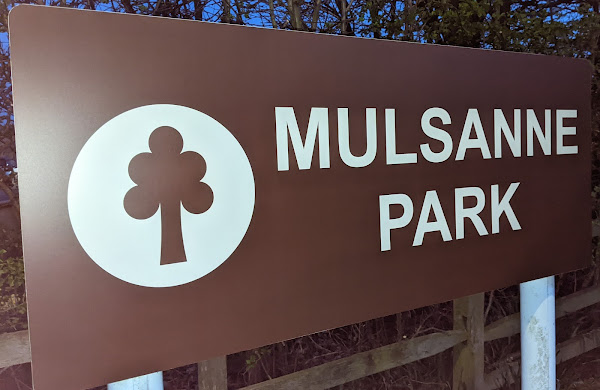 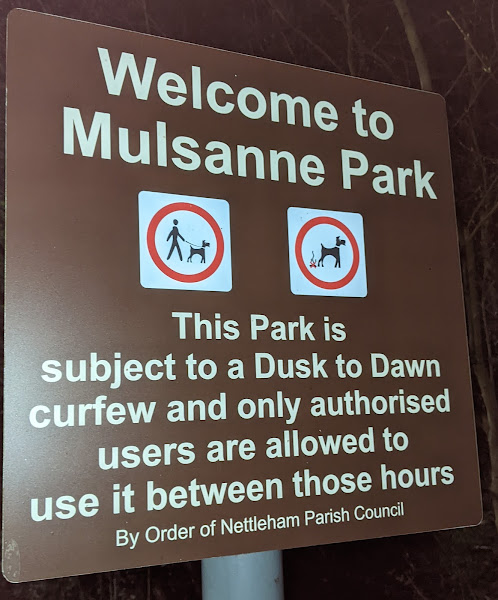 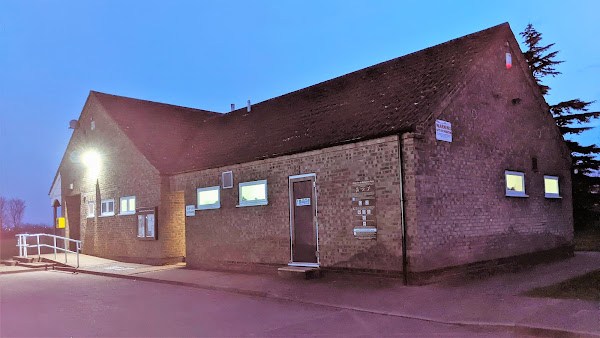 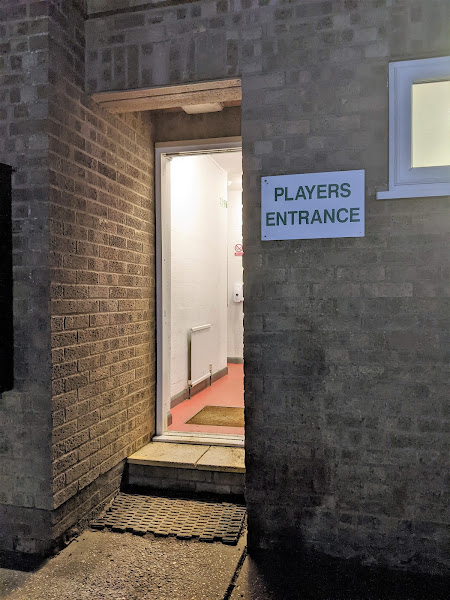 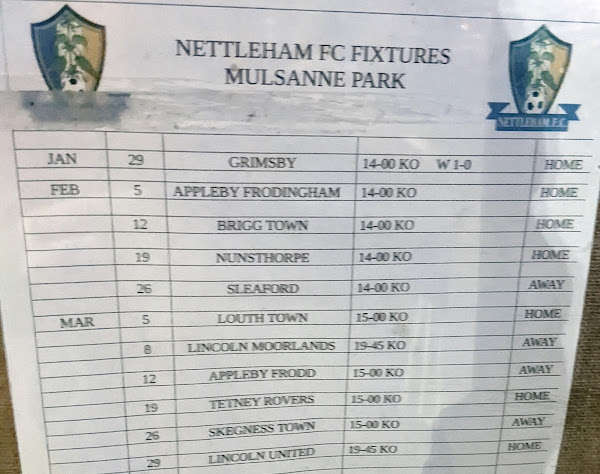 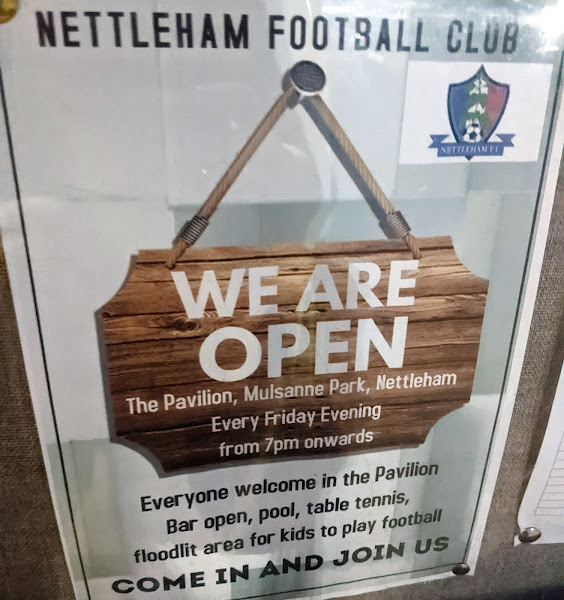 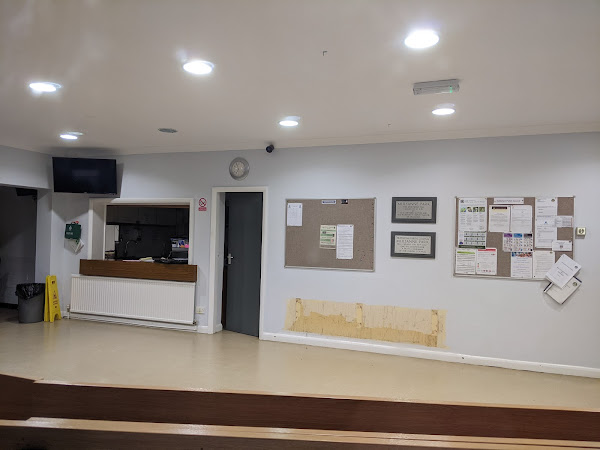 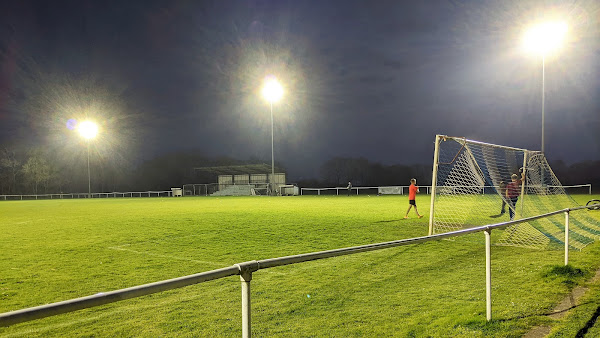 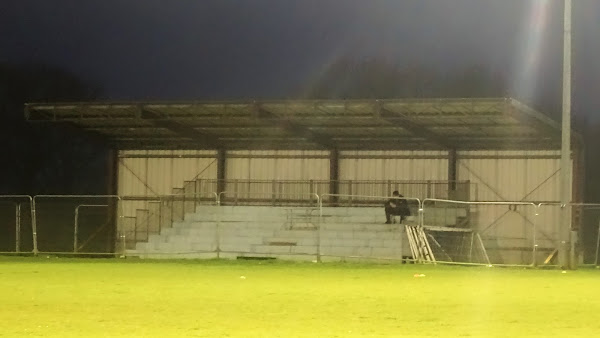 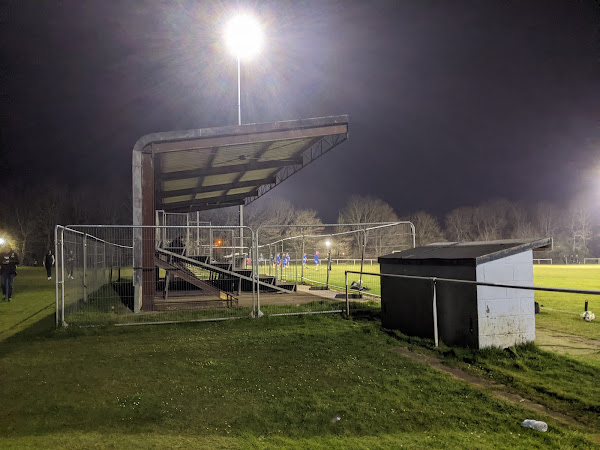 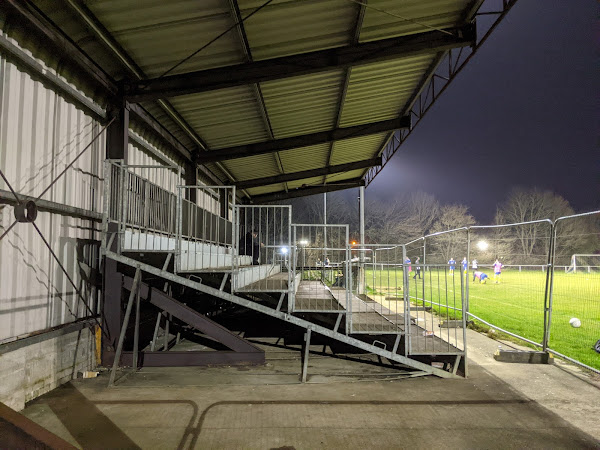 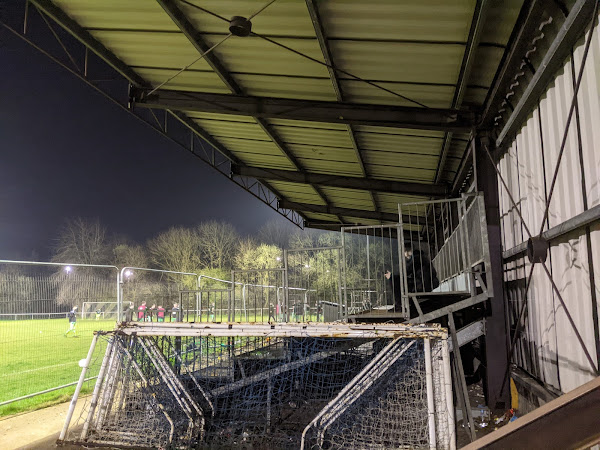 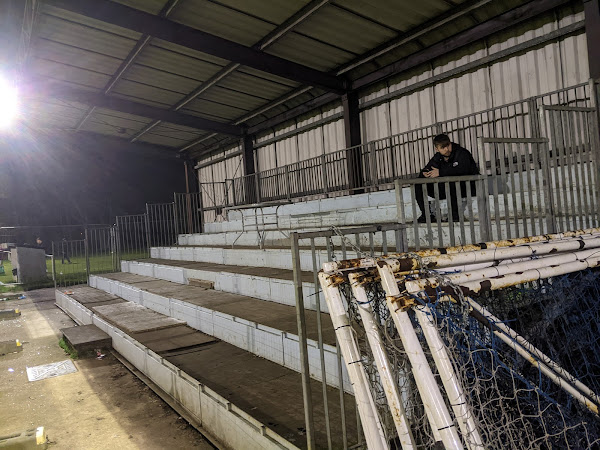 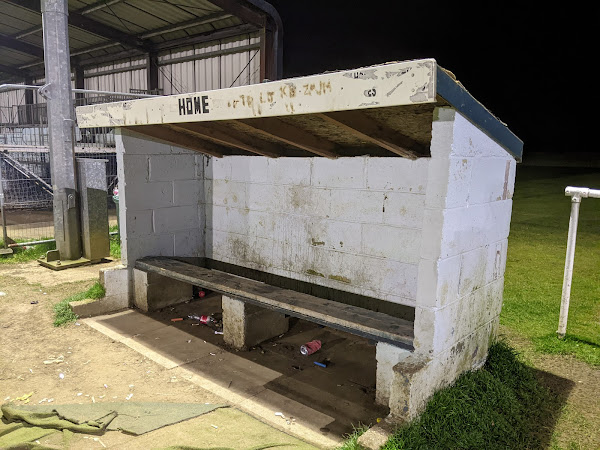 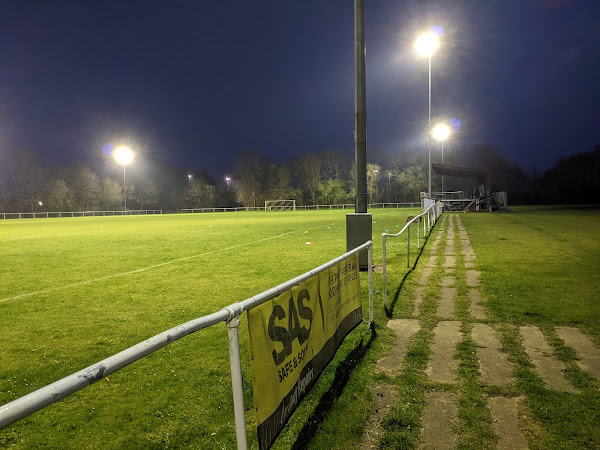 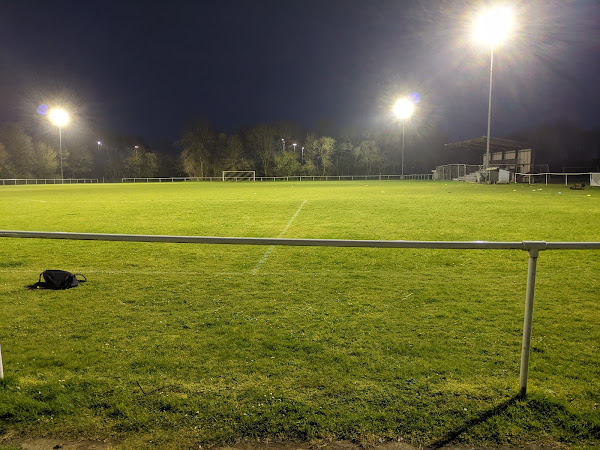 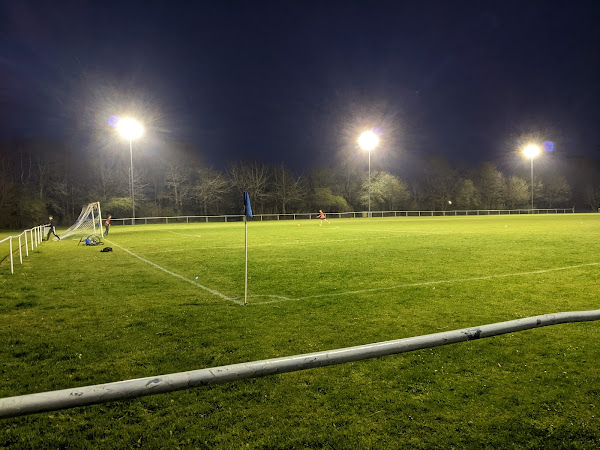 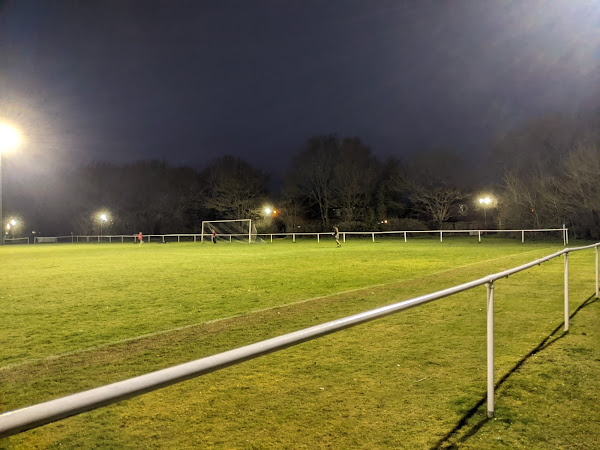 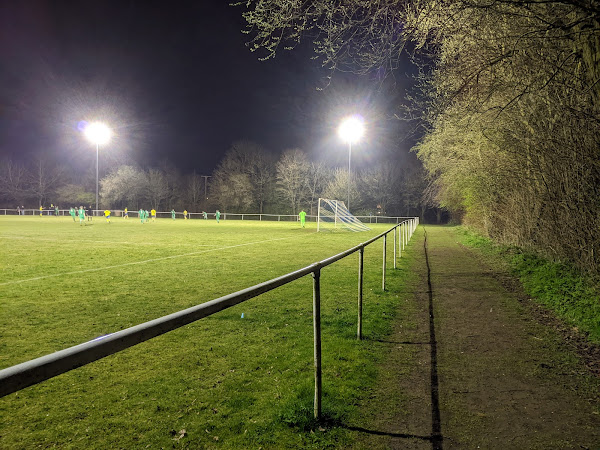