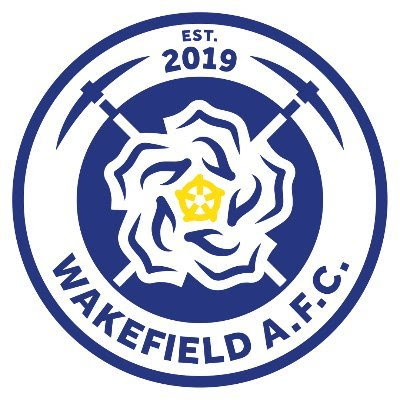 Wakefield AFC
Featherstone Rovers
Millennium Stadium
Post Office Road
Featherstone
Wakefield
WF7 5EN
Official Website
Twitter
Ground Number: 997
Wednesday 15th September 2021
Wakefield 5-0 Houghton Main
Sheffield County Senior Premier
WAKEFIELD AFC - A BRIEF HISTORY
The club is an extremely new one, having been formed in 2019 to solve the issue of Wakefield being the largest city in the UK without a professional football team. Traditionally a rugby stronghold, the most senior team in the town was imported from nearby Emley and played in the town from 2000 until 2014, being known as Emley, Wakefield-Emley and Wakefield during their time here. They played at two venues - mainly the local rugby ground but also at a smaller ground at Wakefield Hockey Club. Their best finish came in 2008 when they finished 7th in the NPL D1 North but after years of struggle and financial worries, they were dissolved in 2014. The new club was spearheaded by former Sheffield Wednesday, Manchester United and Leyton Orient goalkeeper Chris Turner. They set up home at Featherstone Rovers rugby ground with the ambitious aim to reach the Football League within 15 years, having already got a suitable stadium in place, albeit with tentative plans to build their own. They joined the Sheffield County Senior League upon formation, but the last two seasons were abandoned with the team sitting 9th and 6th in each season. 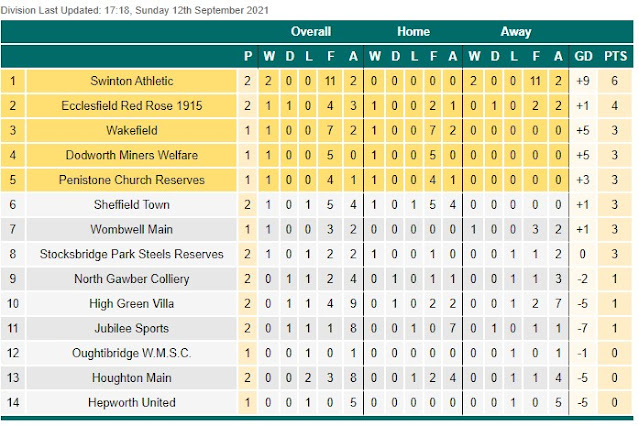 The club currently plays in Featherstone, home of Featherstone Rovers Rugby Club and with a population of just over 15,000. It is located in the City of Wakefield which is home to just over 348,000 people. This is made up of some 21 wards and local teams within the area include Hemsworth Miners Welfare, Pontefract Collieries and Ossett United. In 2003, it was the safest Labour seat in England but since then, the party's popularity has waned, but they are still the strongest political party with 49 seats to the Conservatives 7. The city district is home to three professional rugby league clubs, the Wakefield Trinity, Castleford Tigers who both play in the Super League and Featherstone Rovers who play in the Championship. The district has a strong heritage of cricket with former Yorkshire and England captain Geoffrey Boycott born in Fitzwilliam and current Yorkshire and England cricketer Tim Bresnan from Pontefract. Other famous people from the area include actor Reece Dinsdale and actress Helen Worth who appeared together in Coronation Street as Joe McIntyre and Gail Platt. 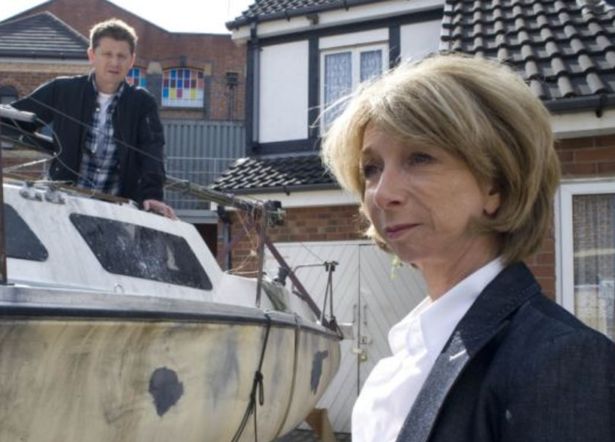 MY VISIT
I'd not done a game with fellow hopper Chris for a while as he had been on holiday in Devon. He was also busy this Friday, meaning that Wednesday was the only opportunity to do a game together was Wednesday. Just as with Tuesday, the options were far less abundant and basically, we had five options, all some distance away. We opted for Wakefield v Houghton Main which had a backup of Wombwell Town v Caribbean Sports. The other discounted options were Field, Leek CSOB and Worcester City. Arrangements were made last Thursday with me researching what Chinese Takeaway to go to - always our pre-match meal of choice. I was stuck at home on Tuesday due to incessant rain and so that gave me the chance to research the club history. 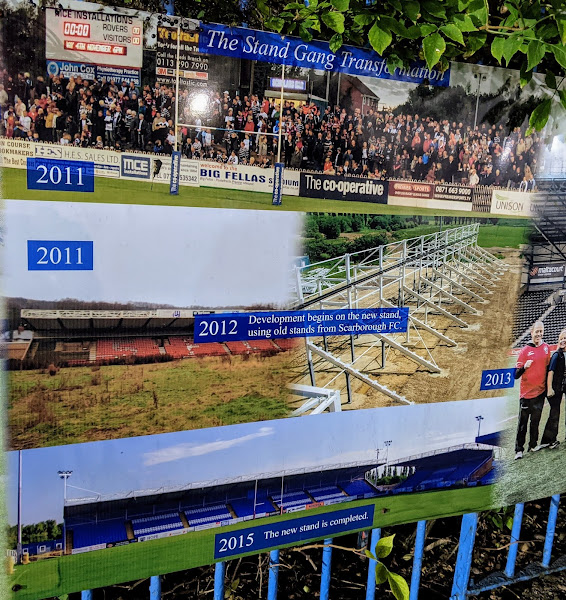 The day of the game came and I awoke pretty refreshed despite a short nights sleep after my trip to Heath Hayes last night. I had breakfast and left early for work, fulfilling my aim of getting petrol on the way. I was disappointed with my fuel economy of 42MPG from last night, meaning I might have ended up paying more than my passenger once servicing is taken into account. It wasn't a bad day at work and I got some of this blog done in my lunch break. I finished a few minutes early and it really helped with me there to meet Chris by 4. Amazingly, it was an excellent journey up too, with no delays whatsoever. We were in Featherstone at 6.25, picking up our Chinese from a place called Yummy King. I had my standard order of Thai Green Curry and Salt and Pepper Chips. Both were really good and some of the better Chinese that I've had. The chips scored 25 points on my league table - joint third out of 33 establishments so far. We went in and everyone was really friendly. A number of hoppers including Chris from Groundhop UK. The pitch was in superb condition, no rugby lines too, unlike most others.

Both sides had a 100% record, Wakefield having beaten High Green Villa 7-2 in their only game, Sadly for Houghton Main, their record was a 100% losing one with a 4-1 loss at Penistone Church Reserves followed up with a 4-2 defeat to Swinton Athletic. Around 12 miles separated the two sides, with Houghton Main playing near Barnsley. Wakefield had the better of the play early on but it was Houghton Main with the first real chance on 10 minutes. A player caught the home keeper out of position but he could only fire over the bar. His team was punished a minute later when Mason Rubie's low drive from outside the area gave Wakefield the lead. Five minutes later, it was 2-0, a header was initially saved by the keeper but Danny Youel followed up from close range. The hosts continued to dominate and they extended their lead on 38 minutes thanks to a cross pitch run and shot from 20 yards by Jake Morrison. On 41 minutes, it was 4-0. A Houghton Main free-kick was well saved and on the break, Owen Kirman gave Wakefield an unassailable lead. The scoring was completed on the hour mark, a long-range shot on the turn following a good through ball lead to Morrison's second. It had been a well-deserved victory but the visitors fought well and had a number of chances near the end. A good crowd of 287 were in attendance, very impressive for England's eleventh tier. 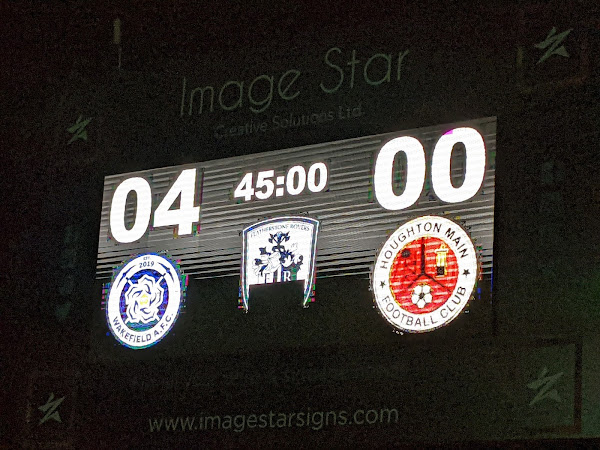 We left just before 10, stopping at McColl's for an energy drink for the way back. Chris tried to get some cash out, but it was declined due to him changing location over the past few days. Obviously, banks have never heard of groundhopping. We listened to Andy Crane on Greatest Hits Radio on the way home. Chris got the 'Guess The Year' competition right with the first song and I was able to confirm it was 1987. This was thanks to a clue about Knightmare, one of my favourite shows as a kid. Due to works on the M1, Waze sent us back via the A1 and it was a good journey home with us getting back to Milton Keynes just after midnight. With Chris having made contact with his bank, we stopped at the BP garage but the cash machine was out of order. With him being out of cash, I drove him to Tesco where it was third time lucky. It would have been nice to fill up with petrol too, being cheaper than back home. However, the 24 hour pay at pump station was closed. I dropped Chris off at 12.20 and headed home. The A418 was still closed with roadworks that were due to be completed at the start of September still ongoing. I was eventually home at 1.20, going to bed within 20 minutes of getting in, with the energy drink from earlier preventing me dropping off for a while. It had been a decent night at a nice club. The signs look good for a successful future for Wakefield and it couldn't happen to a nicer set of people. 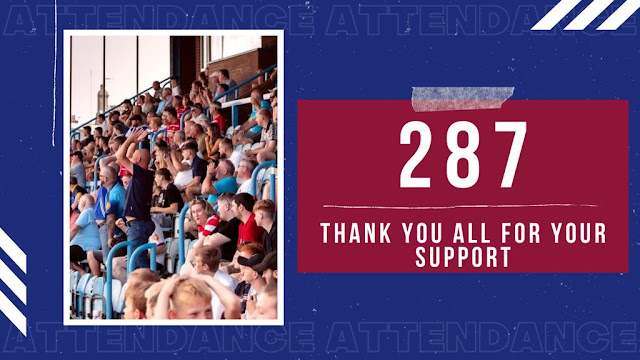 THE GROUND
THE MILLENIUM STADIUM might not be as large as its more famous Welsh namesake, but it still boasts a hefty 7,000 capacity. This is made up of a variety of seated stands, plus an uncovered terrace (around 1,500 in capacity). It was great having the freedom of the ground to take photos - had it been a football ground, we'd have probably had to make do with a couple of blocks. It was through this exploration that I found that the stand behind the goal came from Scarborough's McCain Stadium. A decent ground, well worth a visit and better than some in League 1.
The food had it's usual premium prices, but looked very good and portions were large. There were also a couple of bars, but as I was driving, I didn't explore these. The ground is in an area with plenty of pubs and takeaways, the Yummy King Chinese was excellent. Parking was plentiful and I should imagine that the public transport links are good too. The atmosphere was nice and relaxed and it seems that Rugby fans get a far better matchday experience at bigger grounds than football ones do, being able to have a pint watching the game. This would apply to football fans at this level too for a good few years yet. 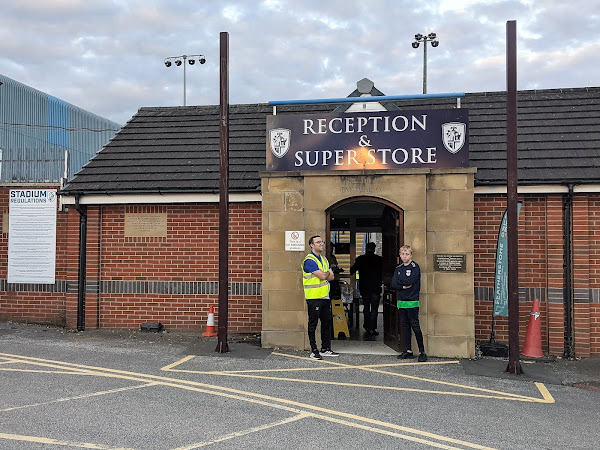 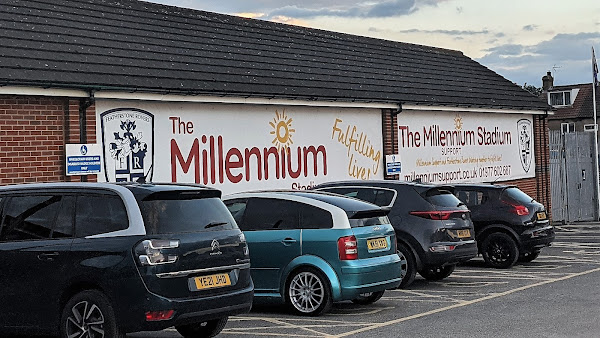 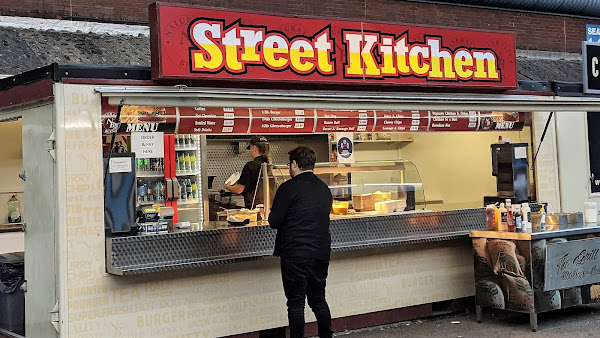 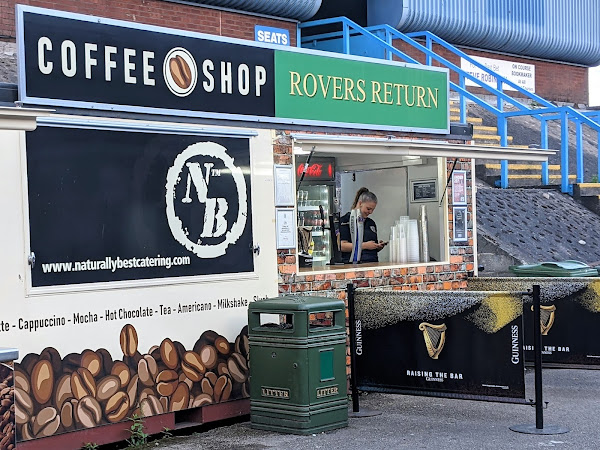 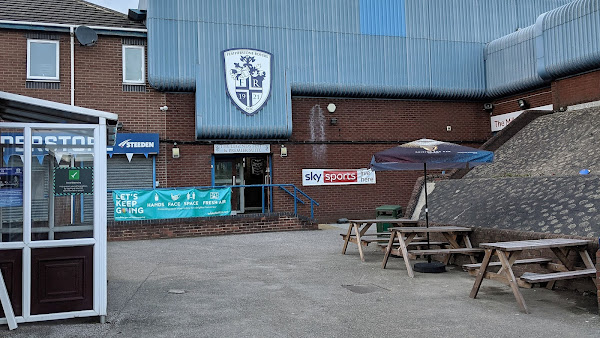 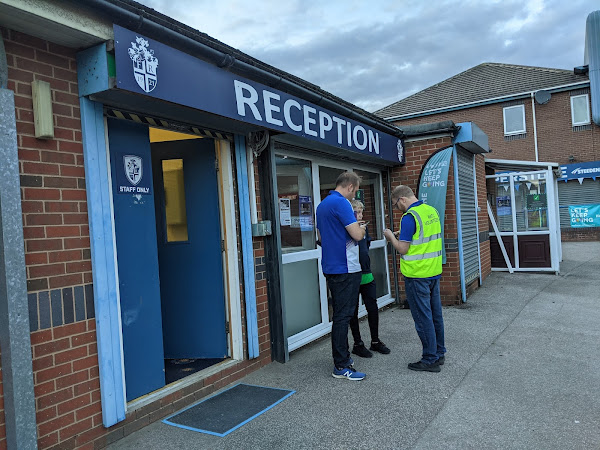 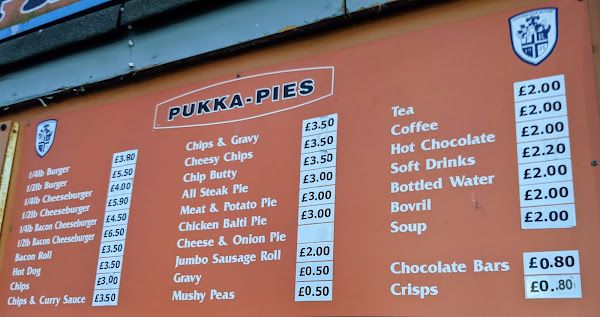 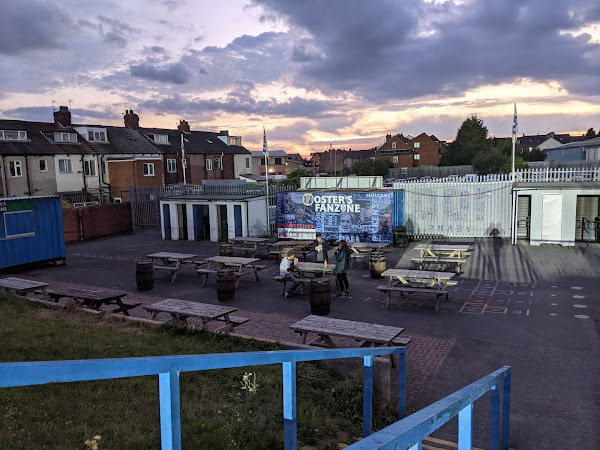 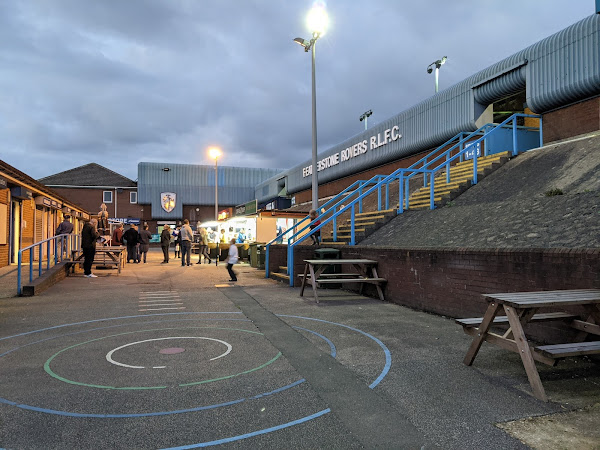 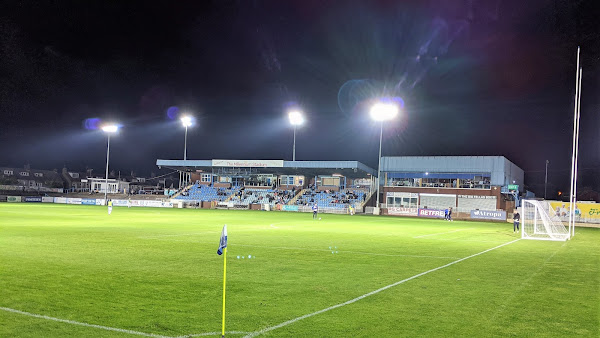 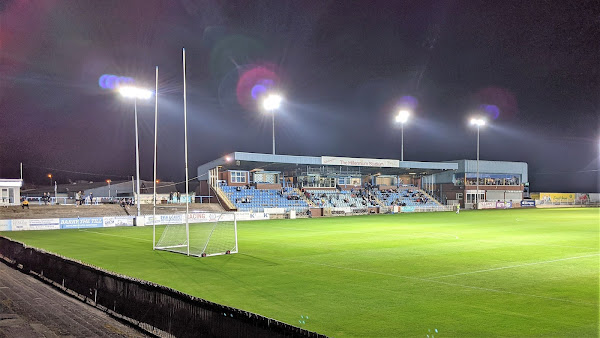 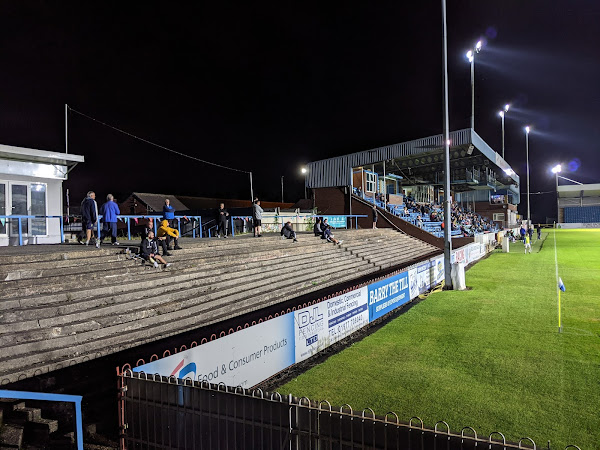 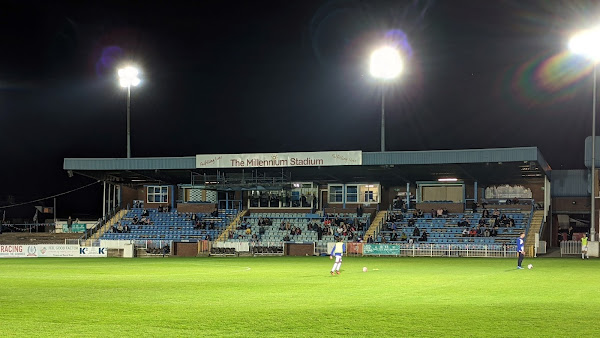 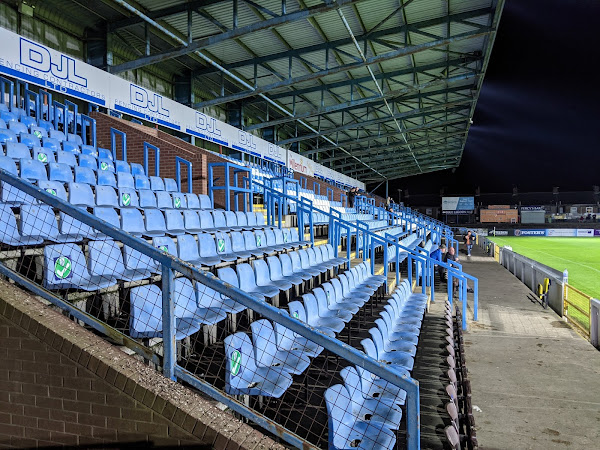 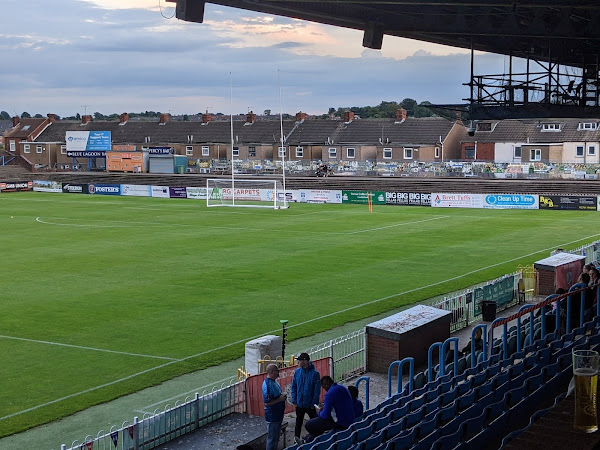 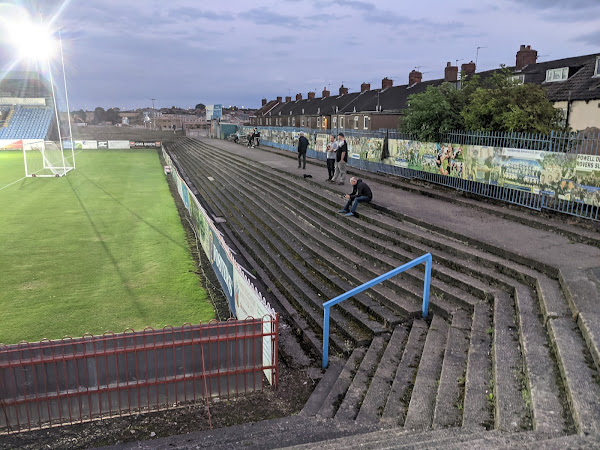 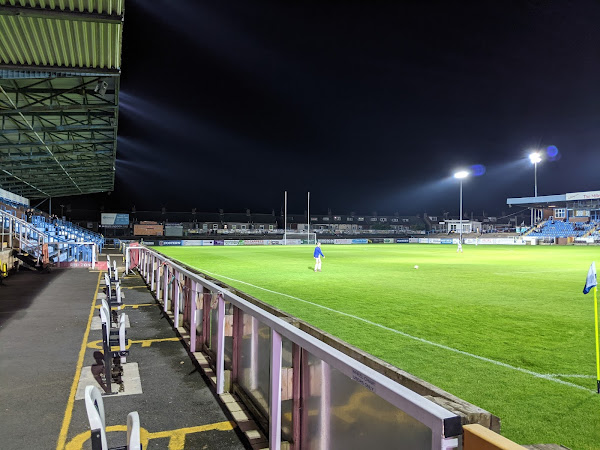 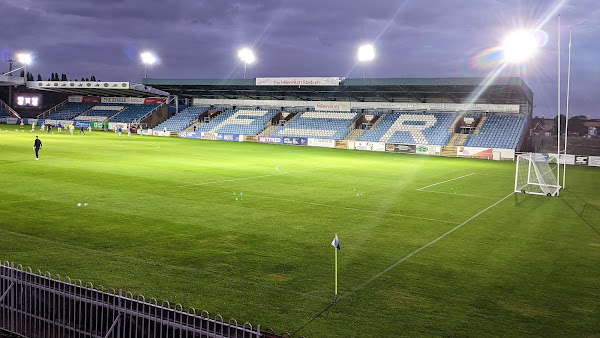 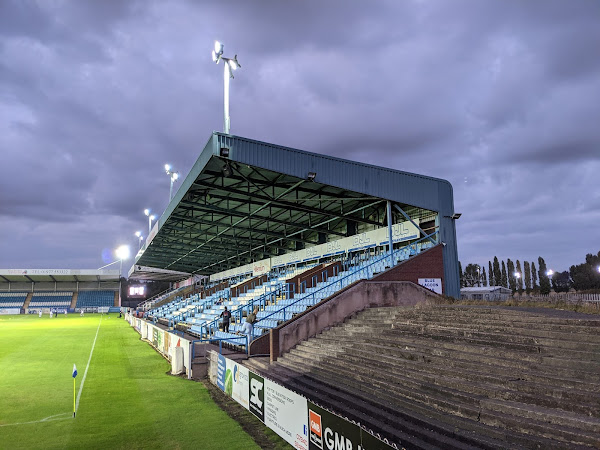 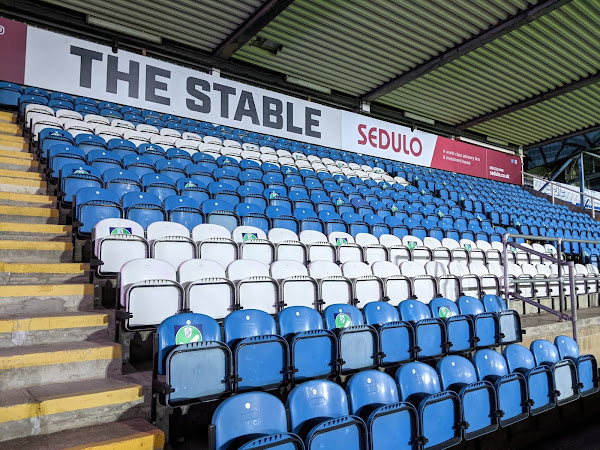 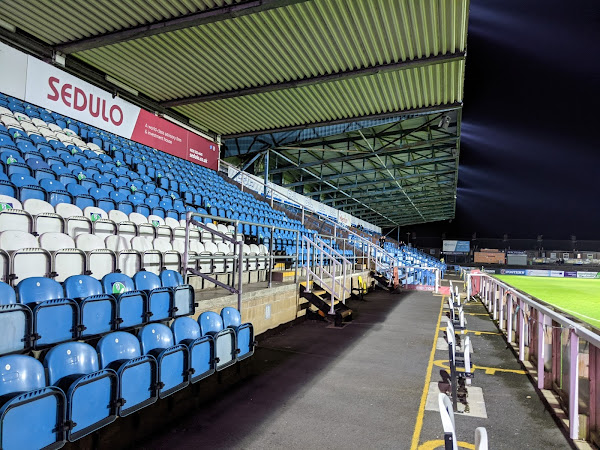 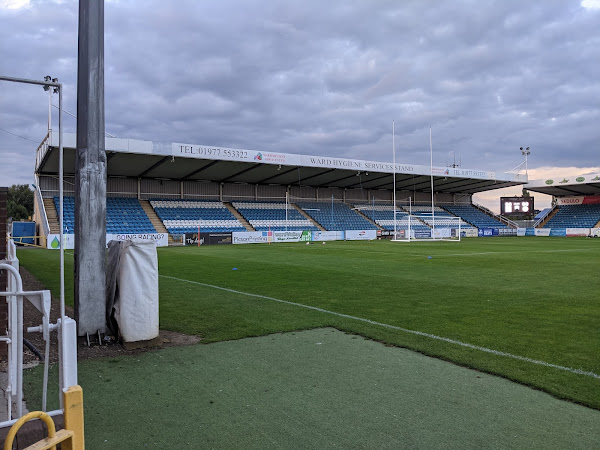 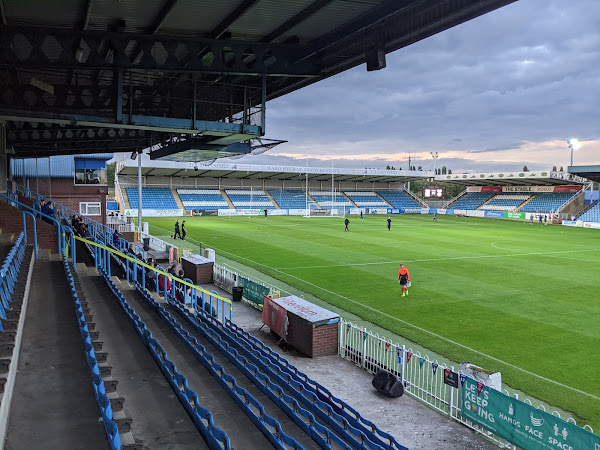 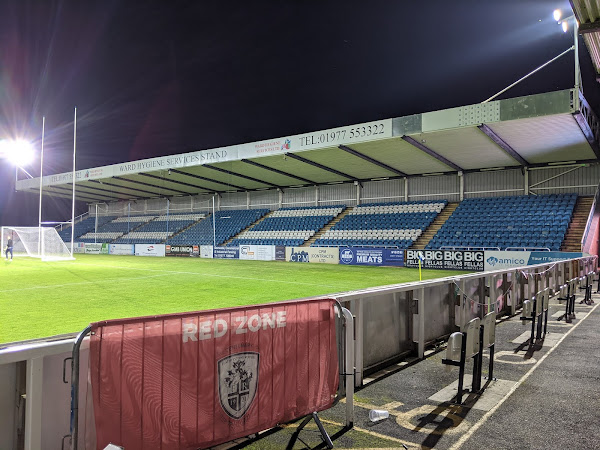