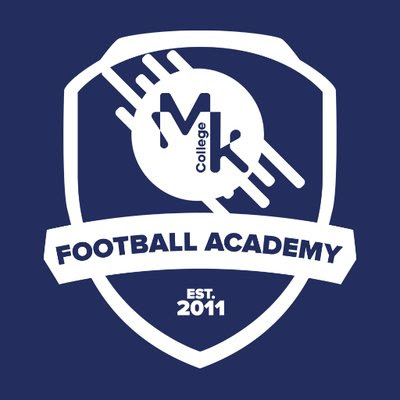 MK College Academy FC
MK Sport Central
Elder Gate
Milton Keynes
Bucks
MK9 1EN
College Website
Football Twitter
Ground Number: 995
Monday 13th September 2021
MK College Academy 3-0 Berkhamsted Raiders
Spartan South Midlands D2
MK COLLEGE ACADEMY - A BRIEF HISTORY
Like many teams at this level, information on this team is hard to come by. Looking at their badge, they were established in 2011. The college was established in 1982 and in its present form, takes in 4,000 students a year. It appears they spent their early years playing in the English Colleges FA leagues. They were 2015/16 ECFA National Champions & ECFA U19s National Cup Champions in 2017/18. The first record I can find of the team is the 2016/17 season when they spent a single season in the Hellenic D2 East where they finished a credible 4th. They then played in the Midland League U21 East for four seasons, with a best-ever finish in 2019 when they finished 3rd. For the 2021/22 season, the team joined the Spartan South Midlands League Divison 2, this sits at step 7 of the non-league pyramid. They've made a steady start and sit in mid-table at the time of tonight's game. The club also has a women's side, established in 2020.
The town of Milton Keynes is the largest town in Buckinghamshire with a population of 230,000. It was intended to be a city originally, established in 1967 and encompassing the existing towns of Bletchley, Stony Stratford, and Wolverton.  The name 'Milton Keynes' was taken from that of an existing village on the site. It is the only place in the UK to have a road system built on grid squares, using a grid pattern of approximately 1 km intervals, rather than on the more conventional radial pattern found in older settlements. Famous sportspeople from Milton Keynes include footballers Dele Alli and Ben Chilwell, darts player Fallon Sherrock and Golfer Ian Poulter.  Actor Kevin Whateley - Neville in Auf Wiedersehen Pet, lives in the area.
In terms of other football teams, Milton Keynes D̶o̶n̶s̶ moved to the area in 2004, having been previously known as and played in Wimbledon. Not content with importing one team to the area, Buckingham Town moved there sometime during the 2010s, later changing their name to Milton Keynes Robins, following the loss of their ground in Buckingham. They merged with Unite MK in 2020 to become MK Irish.  Genuine Milton Keynes teams include New Bradwell St Peter, Old Bradwell United and Stony Stratford Town. Well-known former teams include Milton Keynes City, Wolverton Town and Bletchley Town.  In Ice Hockey, Milton Keynes Lightning play in the sports second tier. 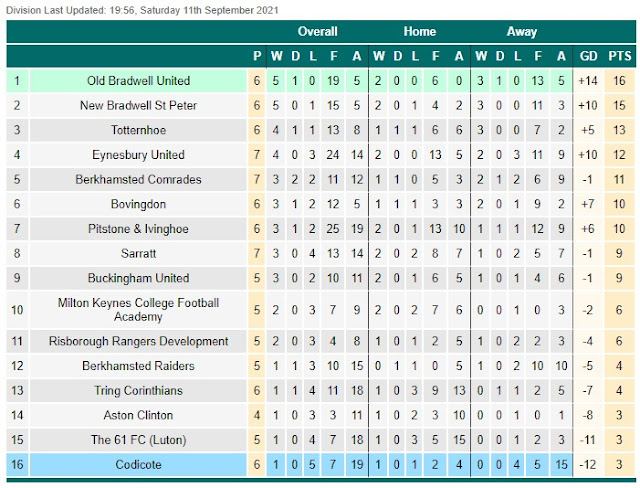 MY VISIT
Back at the start of the season, I decided that I wanted to complete some step 7 leagues. Top of this list was the Spartan South Midlands Division 2. I'd really enjoyed the top two tiers and all of the teams were fairly local to me. Back in the summer, I saw that I had three to do in this league. I went to Aston Clinton in the summer and saw a great game in very basic surroundings. Sport Central MK was another ground that didn't inspire much but nevertheless needed to be done. I'd nearly seen them play in the Midland U21 League at Barlestone St Giles but the referee called the game off around ten minutes before kick-off, much to the annoyance of the players. I was hoping to see them in the same league this season, but they had opted to take the step up to the Spartan South Midlands League. The ideal opportunity was announced around a month ago, when a Monday night match against Berkhamsted Raiders was planned in. The club and league were obviously switched on, planning it on a usually quiet night for football. Later on, the club announced that they were doing a programme, in return for a donation of £2. Programmes are not essential for me, but it's nice to get one, especially when it helps out. The move was publicised and appeared to be publicised by 'Non-League ambassador' Tony Incenzo. He's not everyone's cup of tea, but you can't deny that he does a lot for the sport.  You had to reserve one on Twitter, so I put my name down for one a few weeks before the game. 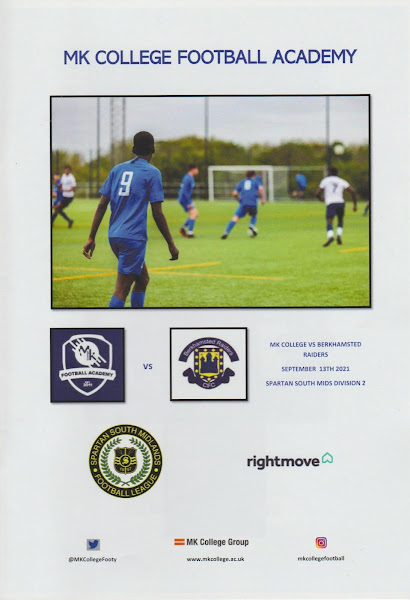 I didn't mention the Wycombe result from Saturday as we gained a decent point in a 0-0 game at Oxford. I was disappointed to hear of an incident of racism by one hanger-on who apparently called a black Oxford steward a 'golliwog'. He was called out and reported by the vast majority of fans around him which was great to see. Working in retail, I tend to think of High Wycombe as the cesspool of humanity, so it's no shock that the occasional piece of human sewage floats down to Adams Park. Sadly, we've been attracting the odd few lately, though nothing on Saturday's scale. Sunday had been a case in point. I despise the day and call it 'Scumday'. At the best of times, the store gets very crowded, it's full of inconsiderate morons unwilling to put a mask on for 20 minutes and coughing all over the place. They let their kids run amok and get in people's way and the customers are generally a rude and pig-ignorant bunch compared to other days. To cap it all, I had a customer who was abusive when I didn't know where something was and asked for my name so he could report me. I gave him a false one of course, and apologised, as much as it goes against the grain. I'd have loved to have told him what I thought of him, but I bit my tongue. The government and some members of the general public treat key workers disgustingly despite them keeping the country going during the pandemic and despite various gestures like clapping for the NHS, nothing has changed. I can only think that someone shat in the gene pool when creating the High Wycombe population as I hear of and see incidents all over the place. Adams Park and The Rose and Crown are the only places I feel happy, welcome and content in my own town. The general population is summed up by local MP Steve Baker, the child starving bandwagon-jumping hypocrite. He voted for all kinds of policies that penalise immigrants and poor people and then acted shocked when Wycombe was named the 'food poverty capital' of the UK. 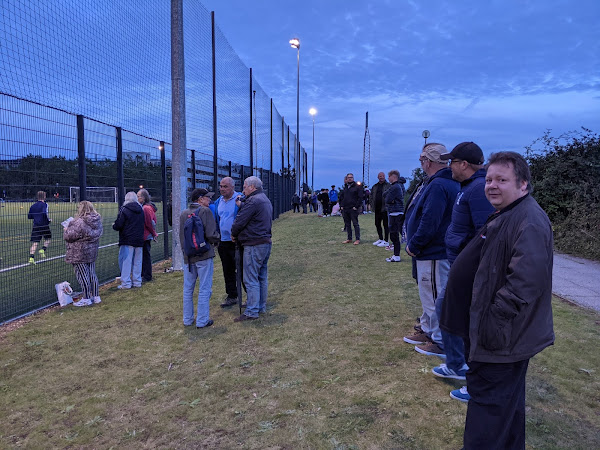 I hate doing negativity on this blog, but I had to get it off my chest. Once I'd got home, I was in a better frame of mind and started planning for my week of football. The club had stated that parking was extremely limited, so I did my research and found a car park that was free after 6 pm. I replied to the match thread and both clubs retweeted it, so hopefully, I help my fellow hoppers and in turn, the host club. Monday was a lot more tolerable, though still with plenty of people I'd rather shopped elsewhere. On the way back from work, I stopped at the football ground to pick up my Manchester City (A) ticket, only to find that they were closed on Monday. I didn't get home until 4.45, meaning I only had just over an hour before I had to go out again. had a bath and a change of clothes before dinner. I left just before 6, hoping for a decent journey. It was a good one and I was parked up an hour later. It was six minute walk to the ground. On the way, I went past the site of the former National Hockey Stadium, now the headquarters of a railway company. I went in and got my programme for £2. The ground as expected was one big cage with fences everywhere. There were no spectator facilities, fans were forced to stand outside the cage but the club was nice and friendly. I stood with other hoppers including Chris, Robyn and Laurence on the far side. 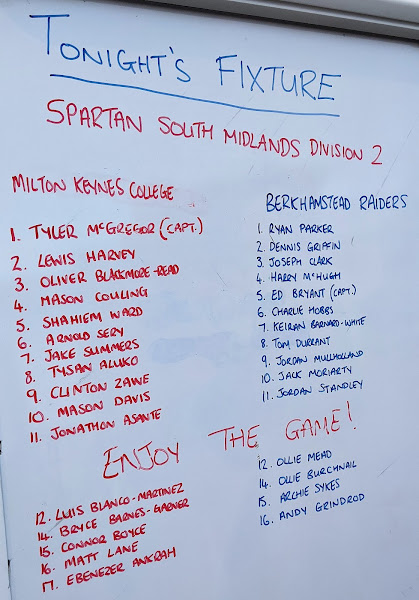 MK Football Academy were in 10th place, having won two and lost three of their five games so far. In their latest two games, they'd beaten Eynesbury United 4-1 and Risborough Rangers Development 2-1. However, they'd not started the season well, losing 1-0 to Berkhamsted Comrades, 3-1 to Sarratt and 3-1 at Old Bradwell United. Berkhamsted Raiders had won one, drawn one and lost three of their games so far and were a couple of places lower. THey'd started the season with a 4-1 win at Codicote and had drawn 0-0 in a game with local rivals Berkhamsted Comrades. However, they'd lost 5-0 to Old Bradwell United, 3-2 at Buckingham United and on Saturday, 6-4 at Pitstone & Ivinghoe in what looked a great game. Unusually, the hosts were in their change strip of red, with the visitors in blue and black stripes. MK College Academy were ahead after 19 seconds, a square ball was played to Tyler Harvey who finished from around ten yards. The students continued to be on top and came close on 15 minutes when the Raiders keeper tipped a shot over the bar. The visitors came close to an equaliser on 29 minutes when they forced the home keeper to tip a shot over the bar but the resulting corner saw the ball scrambled clear. MK College doubled the lead on 35 minutes, a well-worked move finished with a low shot from the right from ten yards by Tysan Aluko. It was nearly three on 42 minutes, Luis Blanco-Martinez got himself into a good position but fired wide of the left-hand post.  In the second half, Berkhamsted Raiders had a goal disallowed for offside. It was 3-0 on 60 minutes, a good run by an MK man saw him round the keeper, the shot was blocked but Connor Boyce was on hand to put home the rebound.  Berkhamsted had a decent spell after this but the students hit the bar on 71 minutes. On 85 minutes, Raiders nearly pulled one back but the home keeper saved well with his right foot. There were 128 in attendance, so hopefully, the club earned a bit out of it, despite the lack of spectator facilities. I was home by 10.30 and with no work in the morning, had time to type up my blog on the night. 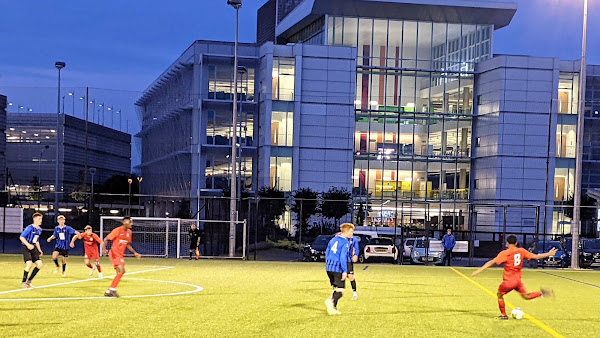 THE GROUND
SPORT CENTRAL is not a great place to watch football. You have to stand outside the cage which makes viewing tricky. It's a shame there are no spectator facilities as the backdrop of lit-up office buildings is quite nice. There is a basic bar at the ground and an Aldi next door. The main centre of Milton Keynes is a short walk away. If you are part of a smaller crowd, you might get away with watching from inside the cage but I'd recommend saving this for a rainy day, quite literally, as it's a 3G pitch. 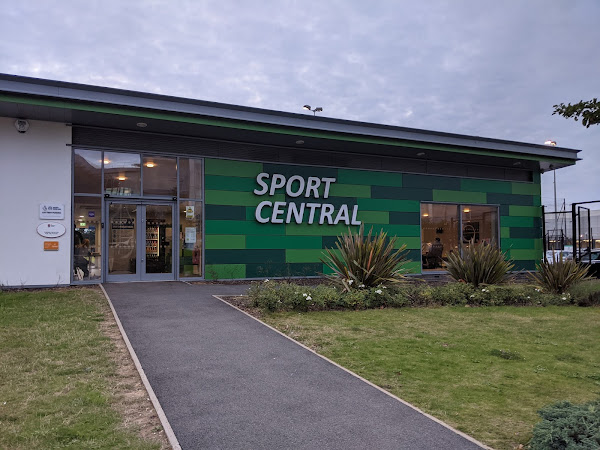 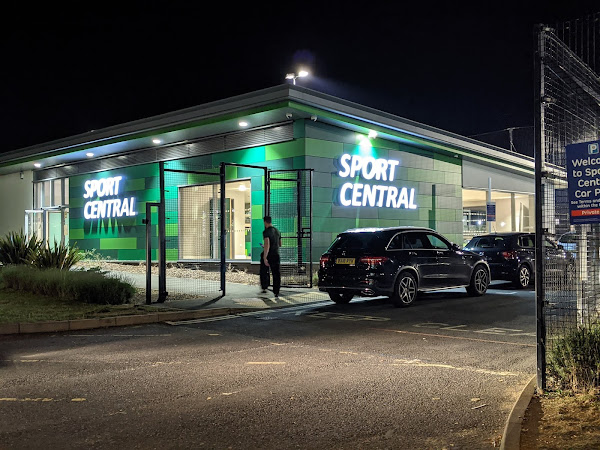 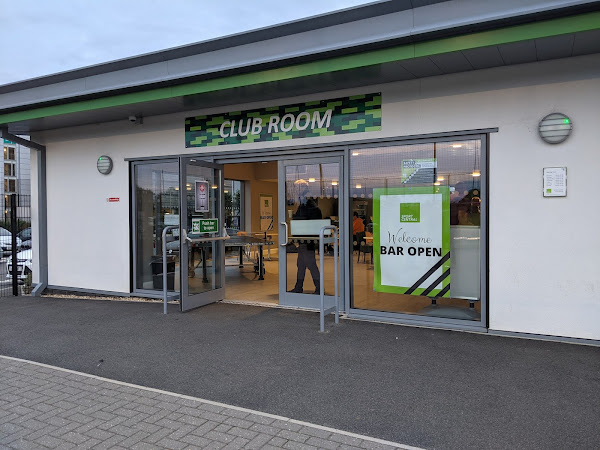 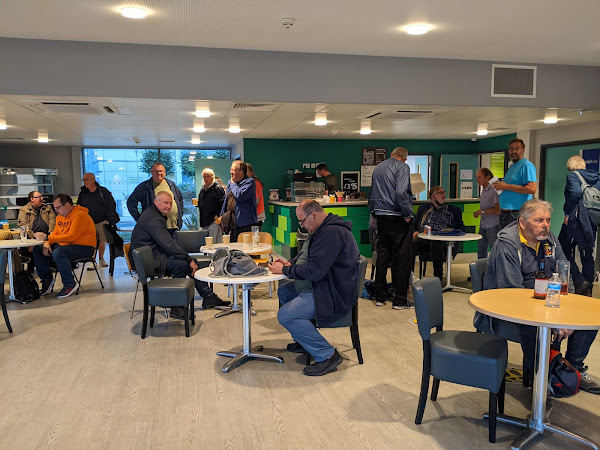 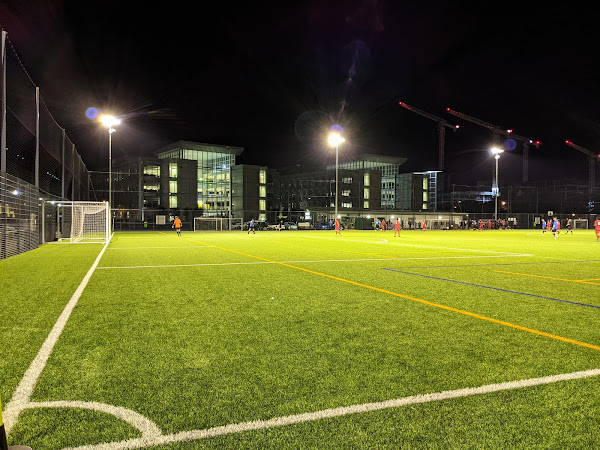 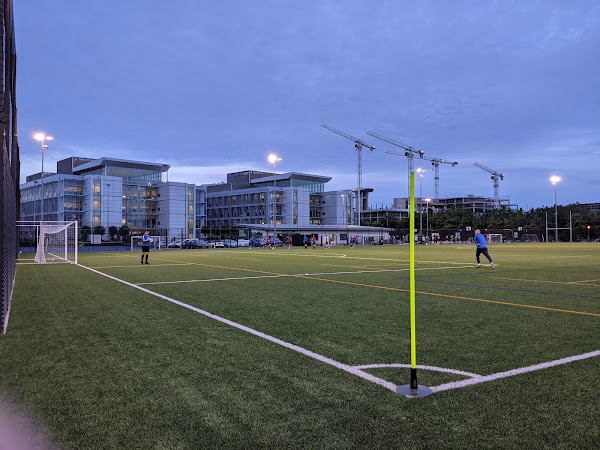 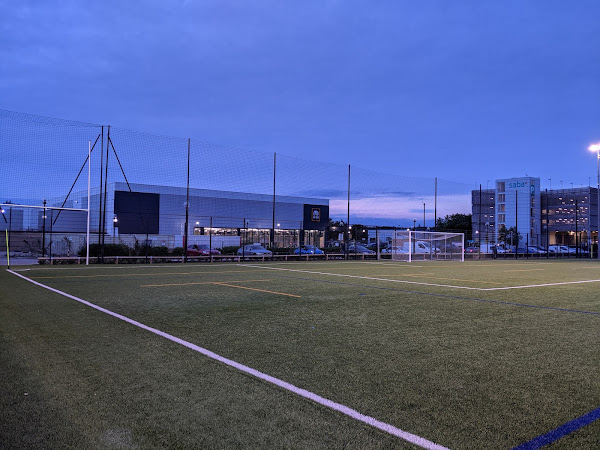 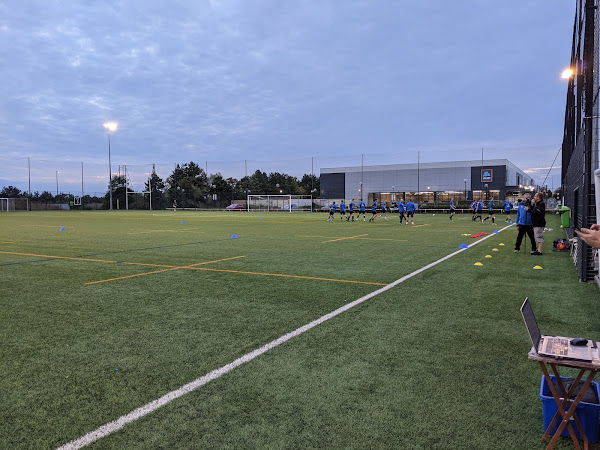 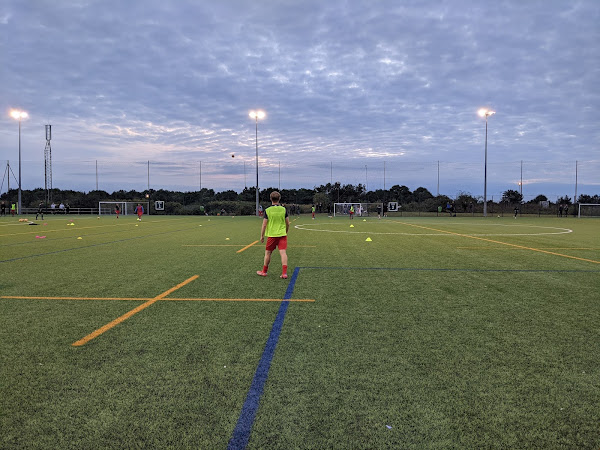 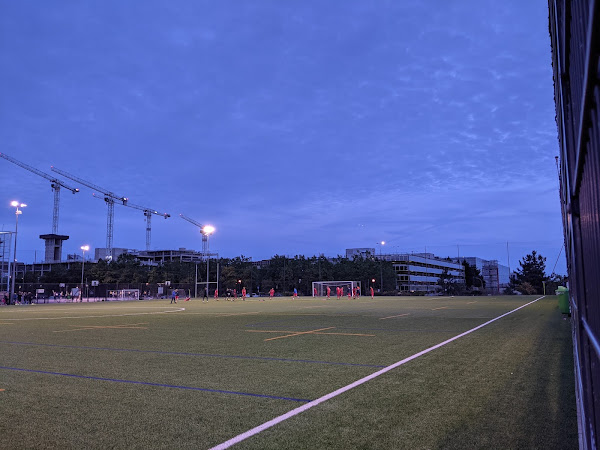 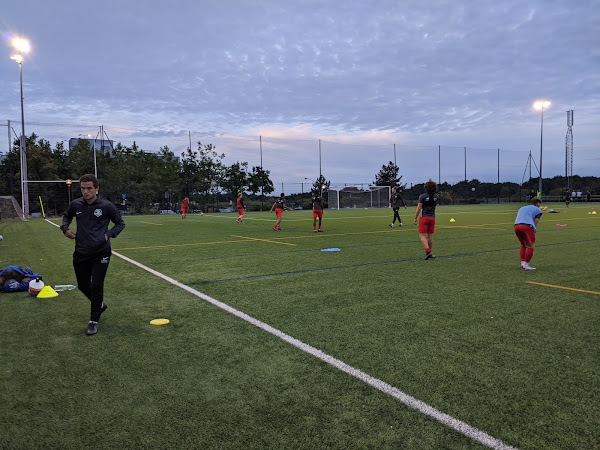 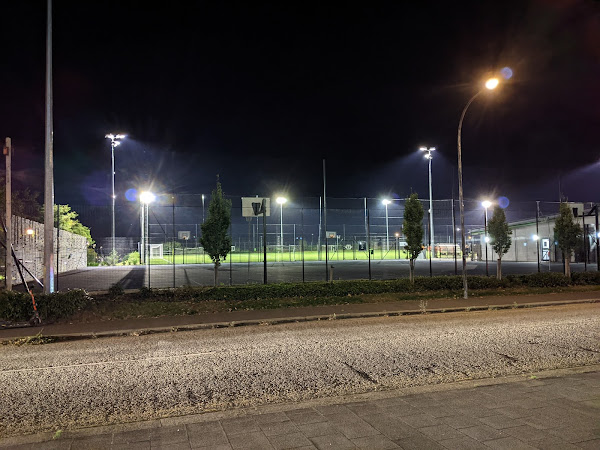