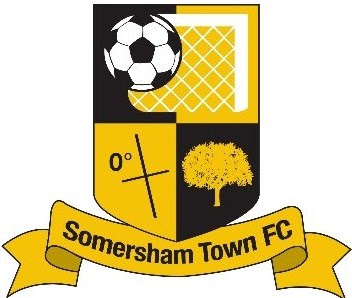 SOMERSHAM TOWN FC - A BRIEF HISTORY
The club was established in 1893 and played in local leagues up until 1950 when they joined the Peterborough & District League. They started out in Division 1, earning promotion to the Premier Division in 1953 after they finished as runners-up to Whittlesey United. In 1988 Somersham joined the Eastern Counties League as founder members of Division 1, their best finish coming in 1993 when they finished 6th. After finishing bottom of the league in 2004, they dropped down into the Cambridgeshire County League Premier Division. They were relegated to Division 1 in 2007 but bounced back in 2010 after a 3rd place finish. In 2012, the first team folded, with the reserve team in Division 1 B (step 10 of non-league) taking over. They finished as runners-up to Witchford 96 in 2013 to earn promotion to the Senior B division and then again to Fowlmere in 2014 to earn promotion to the Senior A division where they remain to this day. Mid-table finishes have been the order of the day - the club was in 5th place with games in hand when the season was yet again abandoned earlier this year.
Somersham Town had a few seasons in the FA Cup in the late 1950s, they won their first game in 1954 3-0 against Newmarket Town but went on to lose 7-1 to Holbeach Town in the 1st Qualifying Round and a couple of other heavy defeats in subsequent seasons. The FA Vase was entered into every season from 1979 until 2004 with Somersham reaching the 1st Round on four occasions. Local cup wins include the Hunts Senior Cup (1973, 1994 & 2001), the Peterborough Senior Cup (1973), the Hinchinbrooke Cup (1954) and the Hunts Junior Cup (1920, 1932 & 1936). The club's record attendance of 538 came when they commemorated the switching on of their floodlights with a friendly against Norwich City in November 1992. The club moved to their present ground in 1960, having previously played on a local recreation ground. Despite the club's same, Somersham is a village rather than a town and is located near to St Ives. It has a population of just over 3,800. It's one of the few places that sits on the Greenwich Meridian Line. 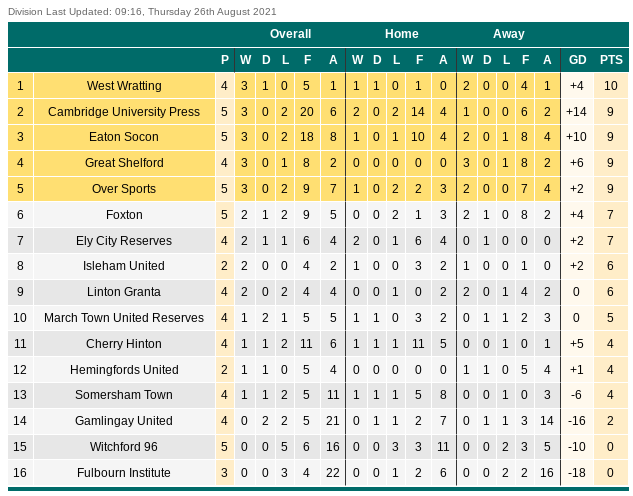 MY VISIT
I'd first intended to visit Somersham Town back in April. That was until the club was told that they were not allowed to have fans. That was during that strange time when Covid could infect you on private sports grounds, but not public ones. In truth, it was because the authorities knew that it was totally unenforceable to stop people from pausing on public access land to watch a game of football. It still defied logic though when shops, schools and other far dangerous places were open long before football grounds were. It still took another six weeks of us watching games outside the non-league pyramid for things to fully open up but it was still nice to go and see a game at venues that I'd be less likely to go to in normal times. When it came to this Tuesday, Somersham Town would save the day again. Due to losing a filling, I took the only dentist appointment that I could which was at 4.45 on Tuesday. This meant that I was very limited with where I could travel, but Somersham was just about doable via Anwar with a bit of luck with traffic and my dentist appointment. By strange coincidence, Hemingfords United would be the opponent, just as they would have been for my original intended visit. They'd also been Somersham's opponent when I'd hoped to see them in July, however, the game was moved to Thursday and I decided to go to the nearer Hertford Heath instead. They cropped up again on 10th August when I'd opted to go to Eaton Socon instead of Somersham as it was nearer and an earlier kick-off. They were the away team on that occasion, winning 3-2 and the fact that I went there proved a blessing in disguise for tonight.
It had been a hard couple of days leading up to the game. I'd at least given myself something to look forward to, booking coaches and hotels for some games away on my week off. I'd got some decent deals on coaches and hotels. I also booked a coach for Saturday when I'm off to Blackfield & Langley v  Wimborne Town in the FA Cup. This proved to be not such a great idea - the £11.20 price was decent but it was all a bit of a faff on public transport and not much cheaper than driving. In the end, not wanting to spend all day travelling, I stuck the ticket on eBay for £6 but fully expected to write off the money spent. It was then a Bank Holiday at work, which are never fun. You tend to get the worst of humanity including a woman who shouted her enquiry louder and louder when I hesitated for a millisecond to think of that answer. That was along without the out of control children and maskless people coughing and spluttering all over the place. It's a tiny minority of course, but with such large numbers, even if it's only one in a hundred, that's still a hell of a lot of people.
The day of the game came and I was glad of a day off. As ever, I walked to town and back, covering 8 miles in all. I came back and had lunch and spent the afternoon planning my upcoming few days away in the north. I left for the dentist at 4.30. I was there ten minutes before my appointment, but typically, went in ten minutes late. It was then a long drawn-out process to replace my filling with me being numbed and all manner of implements being poked in my mouth. Eventually, it was all done, with me £150 lighter for the privilege. If the dentist hadn't played ball, luckily the roads did. I was with Anwar, along with his son Hicham, within 25 minutes at 5.50. It was then a decent journey over to Somersham with us there by 7.20. I was ravenous by then, so we headed to Somersham Kebab House for dinner. It took a while for them to come to the counter but when they did, the food was cooked quickly. We headed back to the ground and eat our meal there, My half-pounder cheeseburger and chips was good for £4.50, especially the chilli sauce. I wish I'd plumped for the pounder burger though as I was still hungry and polished off a pipe of Pringles later on. I arrived at the ground at 7.40 and bumped into fellow hopper Lee Vaughan who had travelled down from Shrewsbury for the game. Entry was free and the game had attracted a good crowd - around 130 were in attendance. 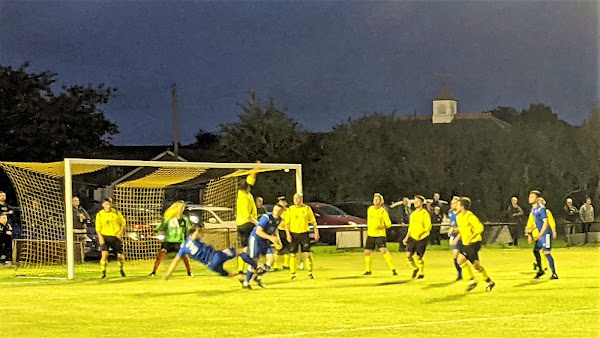 Somersham Town had not enjoyed the greatest of starts and were sitting down in 13th. Their only victory had come a week ago as they beat Eaton Socon 3-1. They'd also drawn 2-2 against Gamlingay on the opening day. They'd suffered defeats - 3-0 at Ely City Reserves and 5-0 at home to Great Shelford. Hemingfords United were in 12th but had only played two games. I'd seen them win 3-2 at Easton Socon but they'd also drawn 2-2 at Gaminglay United. Somersham Town were in yellow and black whilst their visitors were in all blue. It was an even game at first, but Somersham were edging it. The Hemingfords keeper pulled off some great saves, including picking a 20-yard shot out of the top left corner. From the resulting corner, Dan Sterna headed home from close range to put the hosts 1-0 up on 25 minutes. Eleven minutes later, it was 2-0, a great jinking run and shot into the top corner for Sterna and Somersham's second. Towards the end of the first half, the visiting keeper pulled off a couple more good saves to keep his team in it. Just as in the game at Eaton Socon a few weeks back, Hemingfords United came on stronger in the second half. They'd already had a number of chances when they hit the bar on 62 minutes. Three minutes later, they shot narrowly wide of the top right from 25 yards. They eventually reduced the arrears on 70 minutes, a great shot from 25 yards into the bottom corner by Andy Ging. Somersham sealed the win on 85 minutes, this time a great bit of skill to control the ball and shot into the top left-hand corner by Luke Dorling. 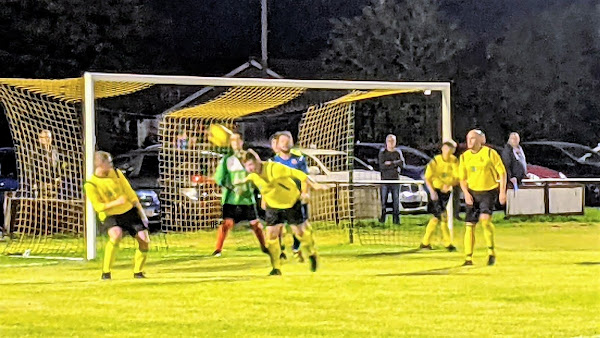 It had been a good game to watch and the hosts just about deserved the win in the end. We left at 9.40 and were taken a different, less pleasant route back. The A418 was closed near Aylesbury so we had to go via Winslow. We were kept entertained on the journey by Andy Crane on Greatest Hits Radio and I was pleased to guess the year correctly of 1994 with Anwar & Hicham going a year either side. I dopped the lads off at 11.10, getting home 25 minutes later. Next up for me is Holmer Green v Ascot United in the FA Youth Cup on Thursday, my 10th visit to my nearest ground. I was glad that Anwar would be joining me on Saturday for my visit to Blackfield & Langley v Wimborne Town in the FA Cup 1st Qualifying Round. I was hoping for a game on Friday night too, but at the time of publishing this blog, there was nothing I fancied. 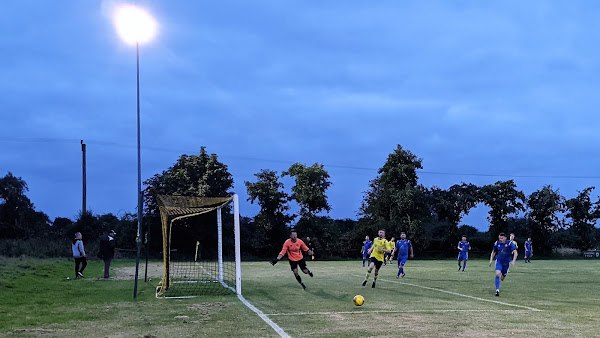 THE GROUND
THE WEST END GROUND is a great setup for the level and has a bit of character. There are two covered standing areas, holding around 150 between them. These have a few random seats dotted around them for those that wish to sit. The ground is generally well kept and is surrounding by trees and greenery. There's a small bar at the ground and this sells a selection of bottles and cans. They also sell basic snacks but the town is around 10 minutes walk away and has various takeaways include Chinese, a Chippy, Curry, Pizza and Kebabs. There's parking at the ground or you can use the nearby streets which are generally free of restrictions. 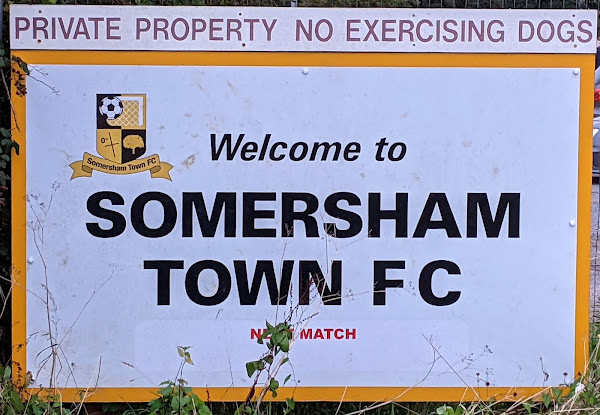 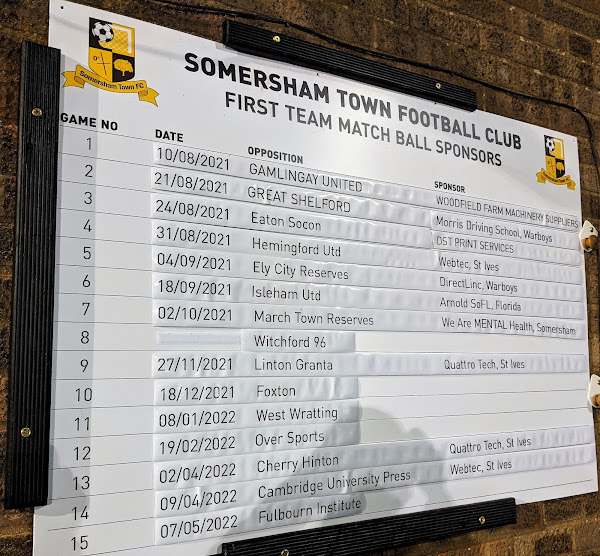 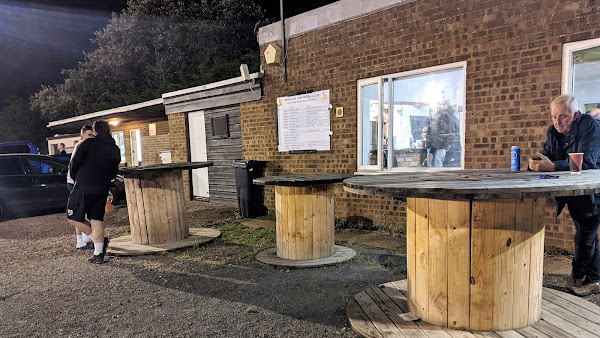 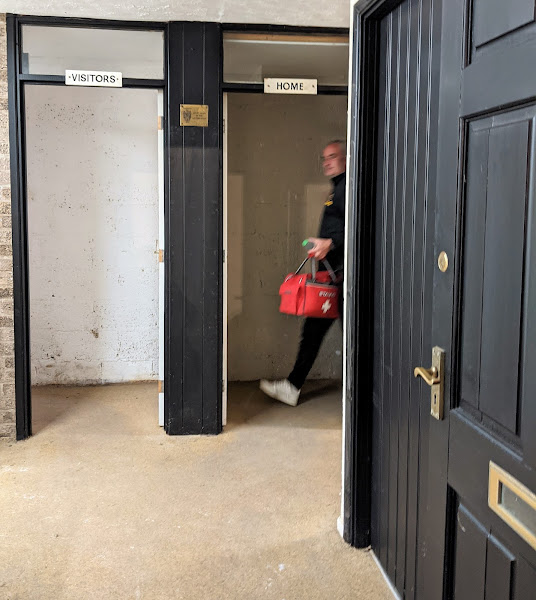 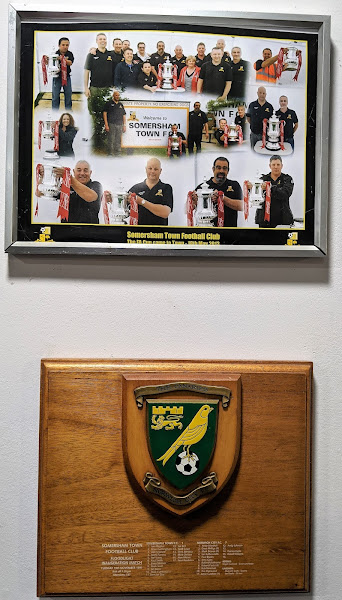 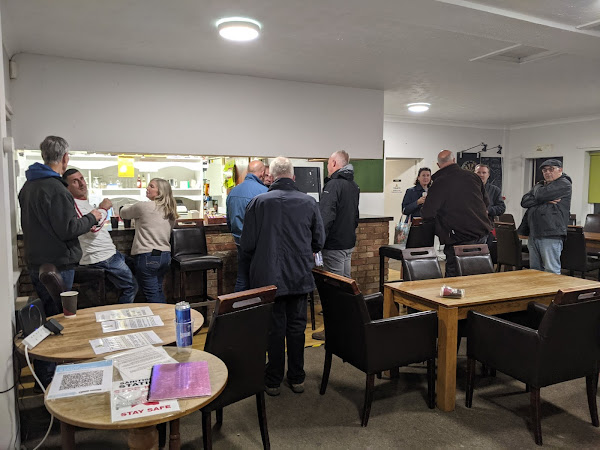 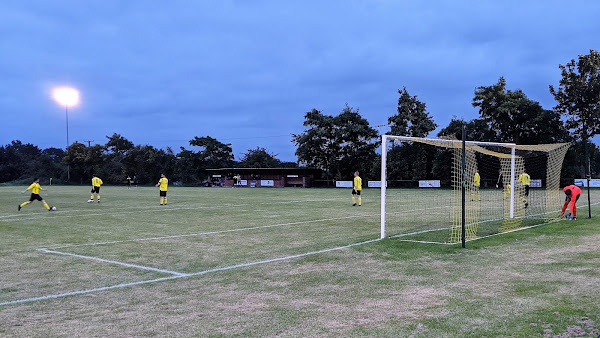 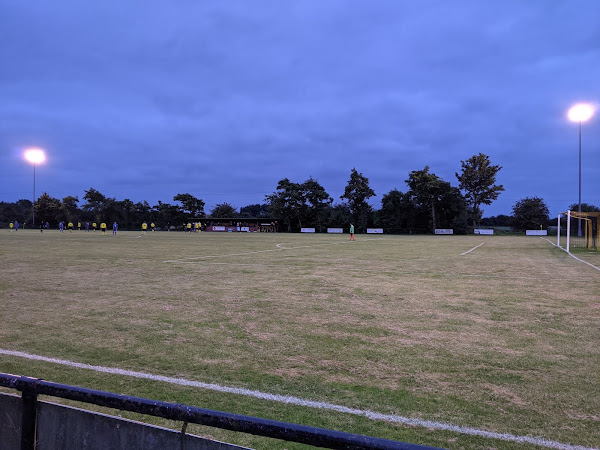 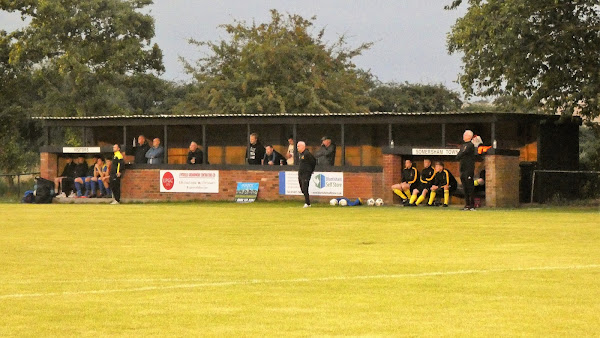 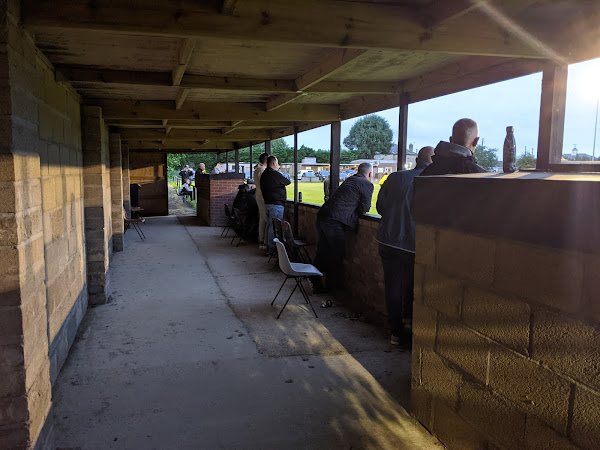 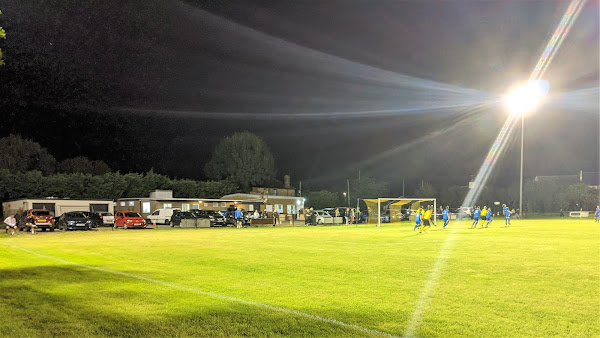 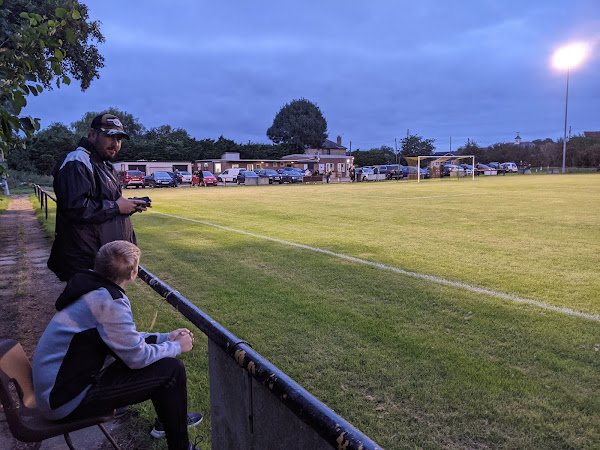 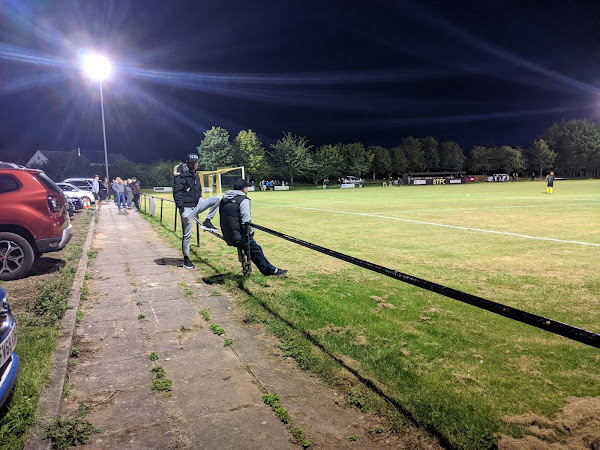 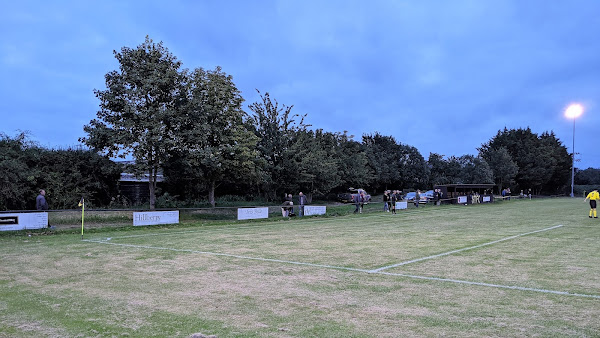 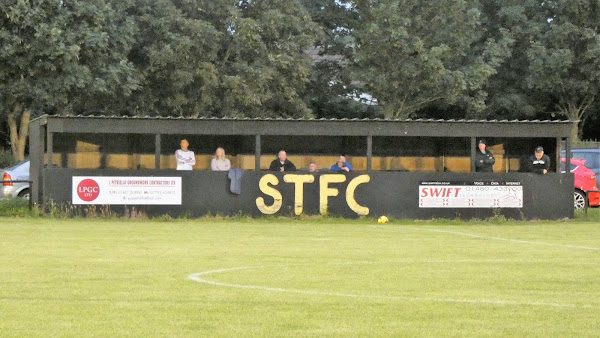 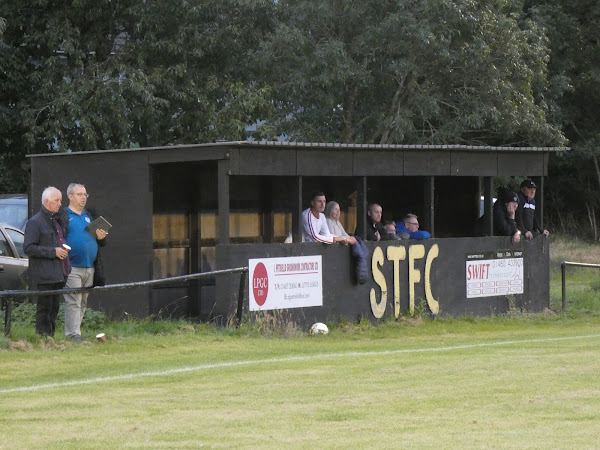 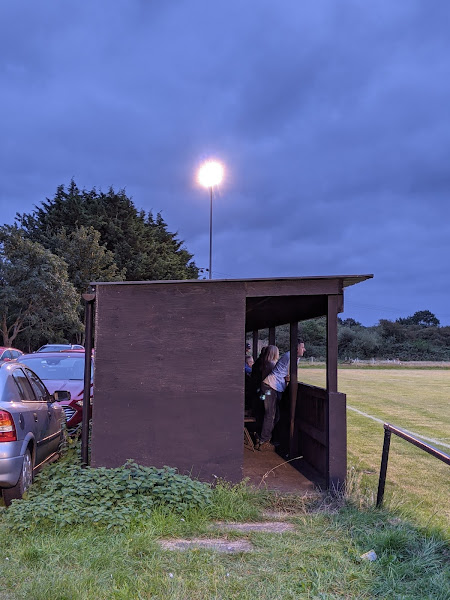 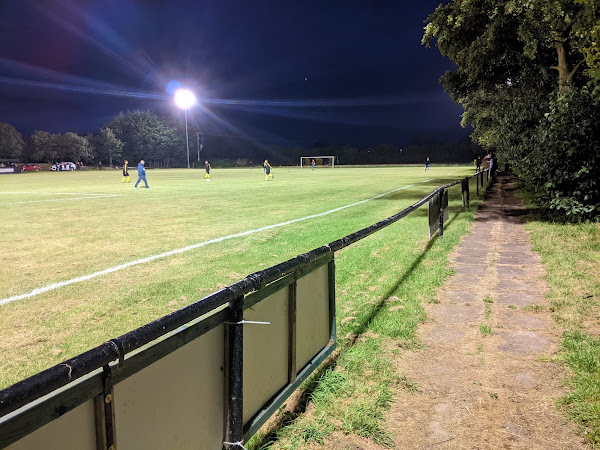 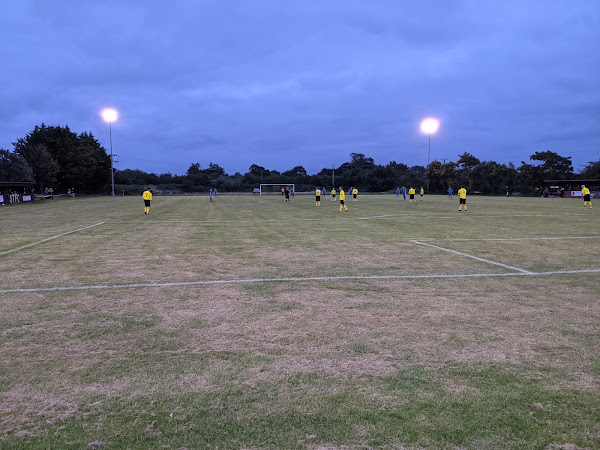 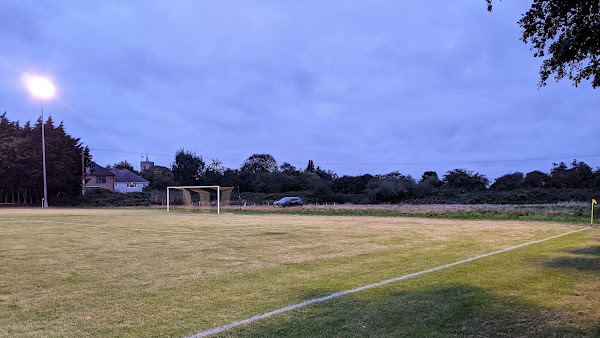