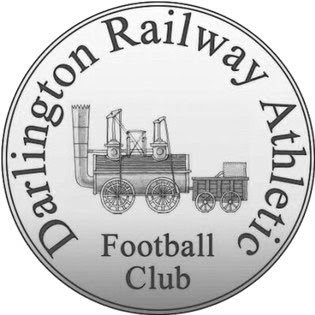 Darlington Railway Athletic FC
Brinkburn Road
Darlington
County Durham
DL3 9LF
Official Website
Wearside League Page
Twitter
Ground Number: 1001
Friday 24th September 2021
Darlington Railway Athletic 3-0 Shildon Reserves
Wearside League D1
DARLINGTON RAILWAY ATHLETIC - A BRIEF HISTORY
The club was established after the end of World War 1, initially playing in the Darlington & District League. They played in the Northern League between 1919 & 1925, their best finish during their first spell being 6th. They returned to the Darlington District League, a competition that they've won five times during their history. After spells in the Teeside and North Riding Leagues, they joined the Wearside League in 1990. Starting in Division 2, they finished 3rd behind South Shields Cleadon and Usworth Village to win promotion to Division 1. However, they only stayed for a single season before forming and refolding. Rejoining the Darlington & District League which they won in 1999, they were transferred to the West Auckland and District League which they won in 2001. They returned to the Wearside League which was now a single division, winning it in 2005. Promotion to the Northern League followed and in their first season, they finished 3rd behind Consett and Northallerton Town to win promotion to Division 1. They finished rock bottom in their only season here, returning to Division 2. Despite a couple of 5th place finishes, they never looked likely to return and after a couple of second-bottom finishes in 2017 and 2018, they were relegated to the Wearside League where they remain to this day. Finishes since returning have tended to be around mid-table.
In the FA Cup, Darlington Railway Athletic had just one victory from five campaigns. That came in 2007 when they thumped Yorkshire Amateur 6-0 only to lose 4-0 at Consett in the Preliminary Round. In the FA Vase, their best run came in their maiden campaign of 1978. They beat Wallington 3-1 and Leeds & Carnegie Polytechnic 2-0 before losing 3-0 at Whickham in the 2nd Round. In terms of local cups, they have won the Wearside League Cup in 2003, the Darlington & District League Cup in 1951 & 1958, the Durham Amateur Cup in 1975, the Sunderland Shipowners Cup in 2005 and the North Riding Cup in 1970. They attracted their record attendance of 585 for a 2012 friendly against Darlington 1883.
The town of Darlington is located in County Durham and has a population of just over 92,000. Famous people who have lived in Darlington include comedian Vic Reeves, entrepreneur Duncan Bannatyne and footballers Tom Craddock and Neil Maddison. Other football clubs in the town include Darlington 1883, known since 2017 as Darlington. They were the phoenix club for the former football league side and are pretty much a continuation of the former club. There's also Darlington Town who also play in the Wearside League. They play at the Eastbourne Sports Complex in the town. There's a couple of rugby clubs in the town - Darlington Mowden Park play at the 25,000 seat Darlington Arena, the white elephant that sent the original Darlington FC to the wall. Darlington RFC are the new Darlington FC's landlords at Blackwell Meadows. There are also a couple of cricket clubs, Darlington Railway Cricket Club play adjacent to the football club. 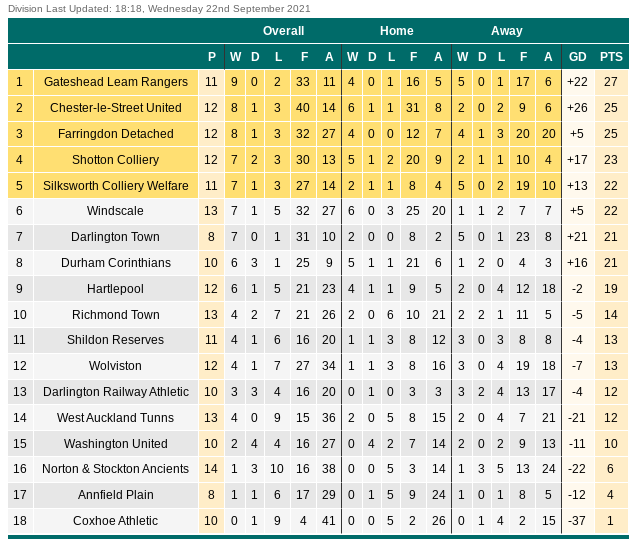 MY VISIT
Originally, I thought I was going to be heading home on Thursday night, as there were no games listed for Friday night. That was until a week before the game when I got my usual Football Traveller magazine and saw that Darlington Railway Athletic were playing Shildon Reserves on Friday night. After checking on the league website and with the club that the game was on, I made plans to extend my stay up north by a couple of days. The day of the game came and I awoke at 8 am after another decent nights sleep. I had a bath but my feet were playing me up, having walked 12 miles yesterday. I think that my shoes are getting a bit loose due to wear as all my skin was hard and sore. I was once again taking advantage of my room being available until 12, researching Willingeton's history for tomorrow and also putting the final touches to my travel plans. I left my hotel at 11.45 and walked to Taco Bell, hoping for some lunch. However, not wanting to miss my train, I opted out, heading to Savers to get some foot cream and a drink. 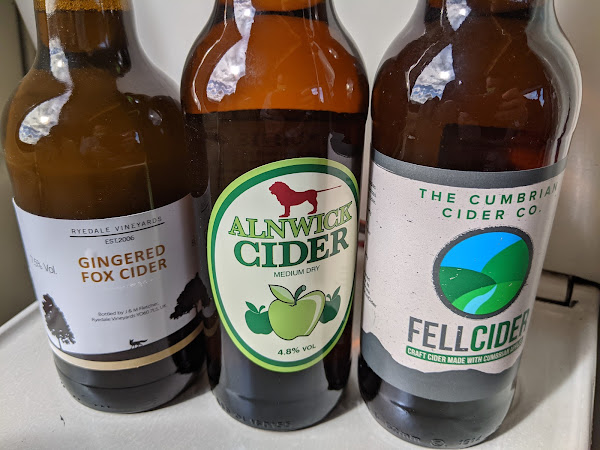 On the way to my platform, I stopped at at the excellent CentrAle, picking up three North East ciders that I'd not had before for £11ish. I got the 12.45 to Plymouth which would be arriving in Devon seven hours later and would no doubt cost a small fortune. I was only going as far as Darlington, for a very reasonable £8.50. The train was pretty busy and I'm not sure the ambience was helped by rubbing cream into my rancid feet, but needs must. My bag was getting increasingly heavy by now and ideally, I'd have sent it home in the post. But for that, I needed a box and some packing materials. I was in Darlington by 13:10 and took the 15-minute walk to Cash Converters. Here, I was hoping to pick up an elusive item, a HIFI system with an optical in socket to connect to my TV. They didn't have such obscurity, so I headed for the Tanners Hall Wetherspoons, my 209th in the chain. The app said they didn't do my favourite Spoons cider, Black Dragon, but happily, it was available at the bar. I settled down at a table, my feet thanking me. I ordered up a beef madras and chips for £6.45, this came with a bottle of Angry Orchard. Neither component was especially brilliant but they did the specified job well and I was now feeling nice and relaxed. 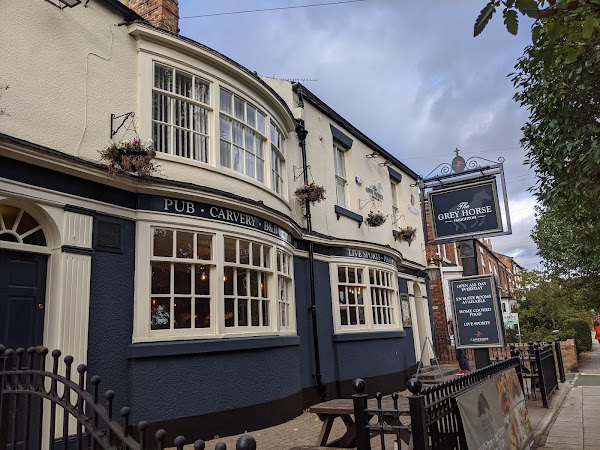 I did eventually procure a free box from Poundland, also buying some bubble wrap and sticky tape. As I was wrapping it up, a filthy pigeon shat on my trousers. The Hermes app was useless, it wouldn't let me send something from myself to myself. So Royal Mail it had to be, there was a huge queue, so I went self-service which was bewildering until someone helped me. The postage was a colossal £17, far more than I'm used to paying but I didn't have the luxury of shopping around. They couldn't even print out a label so I had to write out my address on a passport application envelope and attach it to the box using customs declaration labels. From there it was to Primark for some new clothes. A pair of jeans were procured for a fiver and a Gazza T-shirt for the bargain price of a quid. It was then to the bus stop, where the first scheduled bus was nowhere to be seen. The second one came and it was jam-packed. So much so that it was impossible to fit any more people on. A woman was mildly abusive to the driver, and while yes, the service was utter bobbins, he was just a bloke doing a job and deserved a break. I was at my hotel, The Grey Horse in Haughton Green for 16.30. A quick shower, my trousers in the bin and a change saw me out at the bus stop for 17.05. The 17.07 didn't show up and the 17.19 finally got to me at 17.30. I was in town 10 minutes later and then it was a ten minutes walk to The ORB Micropub. They were operating table service only, so I ordered a pint of local Kemp cider. Only they only had a third of a pint, had charged my card and then it was a huge faff for a refund. I accept that mistakes happen and the lady was very nice. But it all could have been avoided had it been pay at the bar. At least I got a freebie sample though. It was then to the Bondgate Tavern where I had a pint of Old Rosie for £3.60. It was OK but nothing new. I ordered my Parmo dinner from here. I'd fancied a sit-down meal, but like yesterday, I was pushed for time due to companies letting me down and had to do everything in a rush. I had it sitting on the bench outside and it was so huge, I couldn't finish it. Instead, I made my way to the bus stop and once again was let down. Most of the buses said 'Not In Service' or 'Merry Christmas' and I had to wait 20 minutes for the first one. I got to the ground at 19.15, getting some soft drinks on the way. £3 entry was paid at the gate and I also got a pint of Strongbow Dark Fruits at the bar for £3.80. 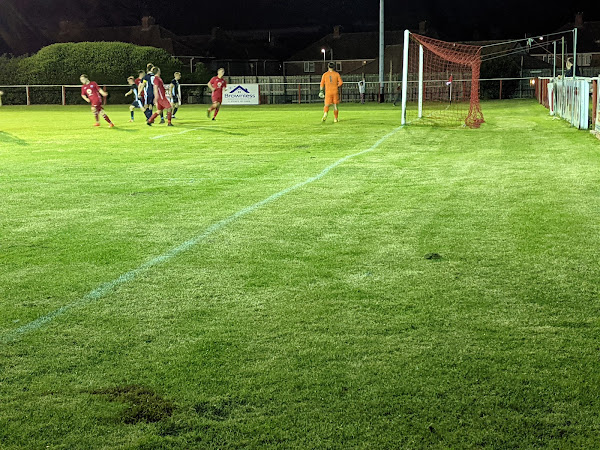 In their last six, Darlington Railway Athletic had been in disappointing form. On Wednesday, they had lost 4-1 at home to Wolviston and had also lost 5-2 at Windscale, 2-1 at FC Hartlepool and 2-1 at Shildon. They'd also drawn 3-3 with Shotton Colliery and won 9-2 at Annfield Plain. Shildon had been in indifferent form. In the last six, as well as their victory against tonight's opponents, they'd also won 2-1 at Darlington Town. They'd drawn 1-1 with Coxhoe Athletic but had lost 5-3 to Wolviston, 2-1 to Darlington Town, 2-0 at FC Hartlepool and 2-1 at West Auckland Tunns. Darlington RA started well on top but then Shildon had a series of corners. It was 1-0 to the hosts on 18 minutes, Phil Caley converting a penalty. Joe Peel headed home a cross for the hosts on 24 minutes, but he was adjudged to be offside. It was 2-0 on 32 minutes, it took a few moments to be confirmed but in the end, the goal, scrambled home by Luke 'Trigger' Hague was given. Shildon hit the bar in a quiet second half. The game was sealed on 75 minutes, Peel finally getting on the scoresheet as he headed home a cross from the left.

After the game, I spoke to John from the club. He was a really friendly guy was also a Sunderland fan. He gave me a club t-shirt which was nice and said that he had just replaced two outgoing board members who were 78 and 75. It highlighted the problem that so many clubs have with elderly volunteers and no one to replace them. From there, I walked back to town as it was only 8 minutes slower than the best-case scenario with the buses. It was the Tanners Hall Wetherspoons again and as the Black Dragon had sold out, I had to settle for a pint of Broadoak Moonshine.  It wasn't great and got worse later on with the aftertaste. I debated having a Strongbow to wash the taste away but decided against it, instead, heading for the bus stop. It came within a couple of minutes of its due time, which was a bit of a result by today's standards. I was back at my hotel by 22:45 and might have had a nightcap, had the bar not been closed. Instead, I headed back to my room and had a Capri-Sun and typed my blog. I was glad to get everything on charge, ready for my last day, at least for the moment, in the northeast tomorrow. 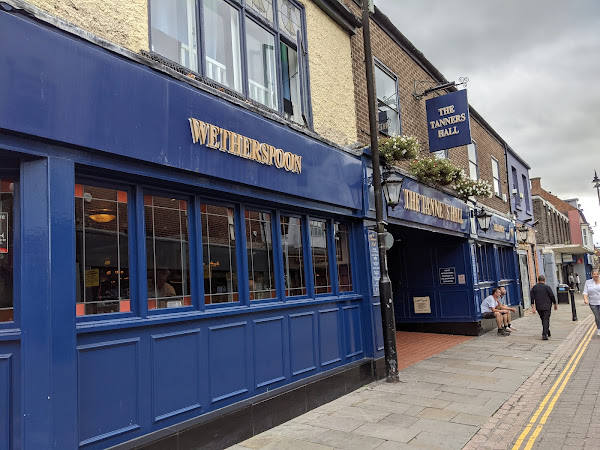 THE GROUND
BRINKBURN ROAD or the DARLINGTON RAILWAY ATHLETIC CLUB is a great venue for step 7 and would suit a couple of levels above. There's cover at both ends, a seated stand holding around 150 and cover holding around the same. This once had steps but is now mainly flat standing. The bar, whilst not having an amazing range is one of the nicer in non-league, although I didn't see any food. There are a few takeaways nearby, plus a couple of shops. There's street parking and the ground is on a fair few bus routes from Darlington. 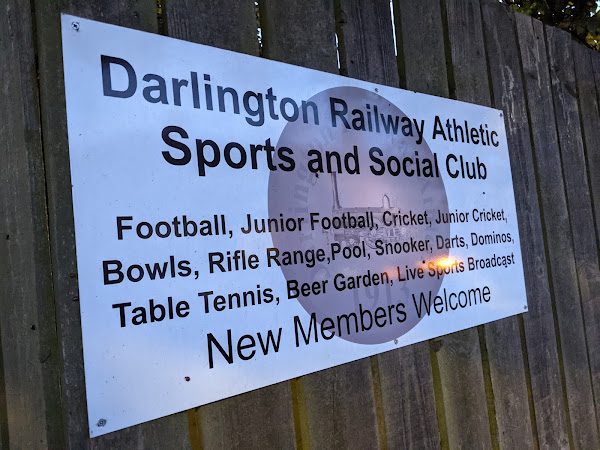 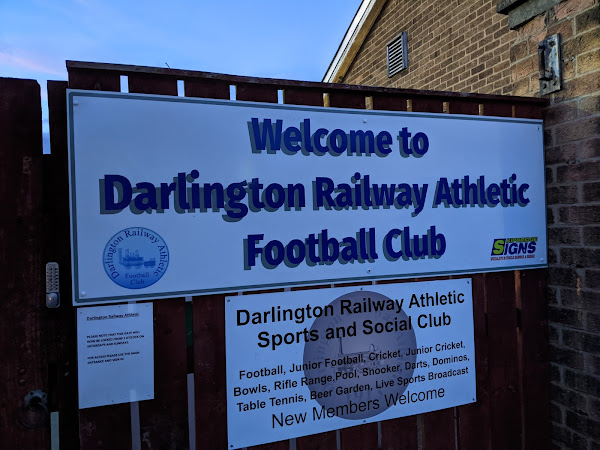 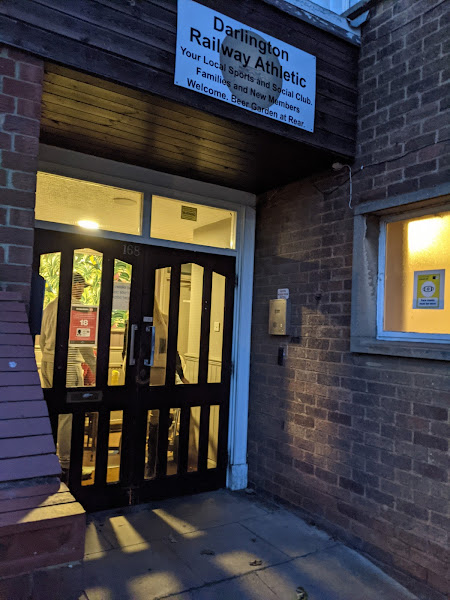 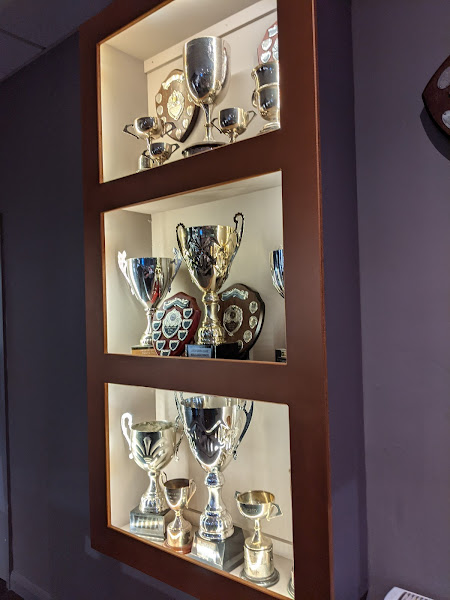 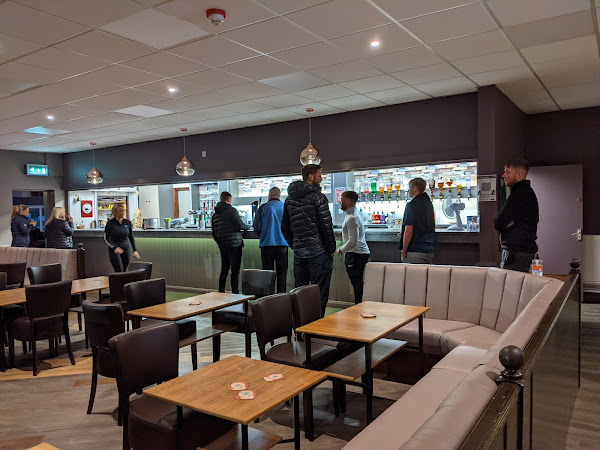 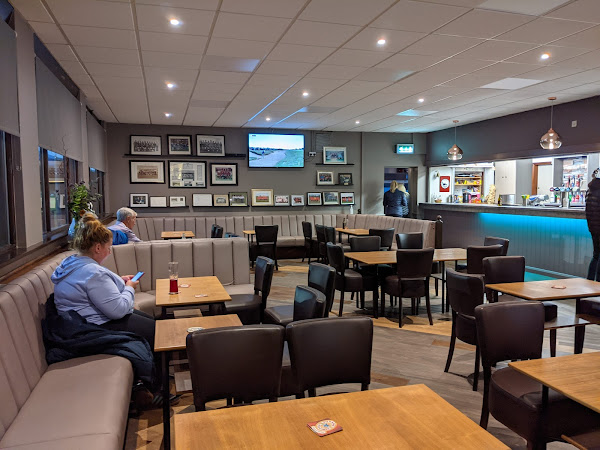 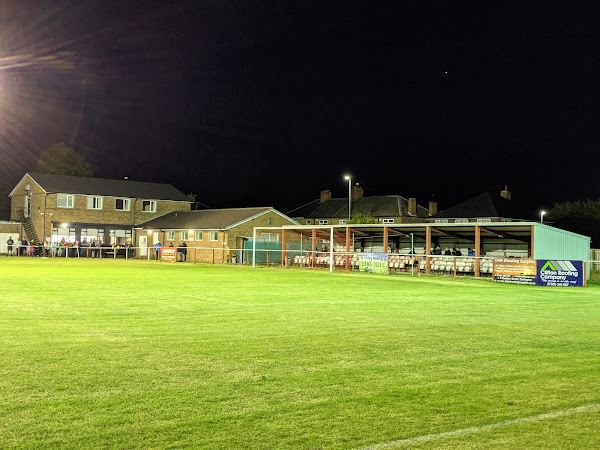 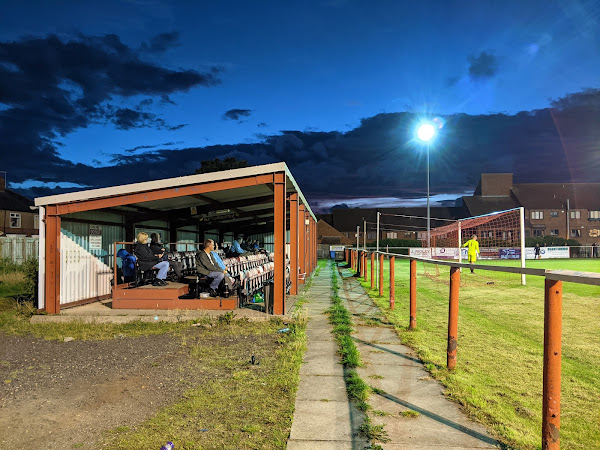 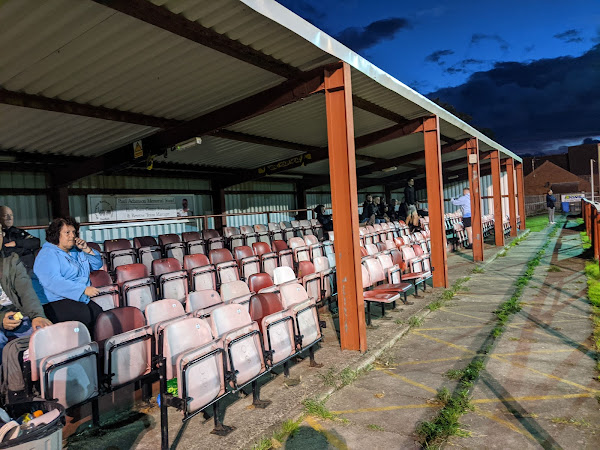 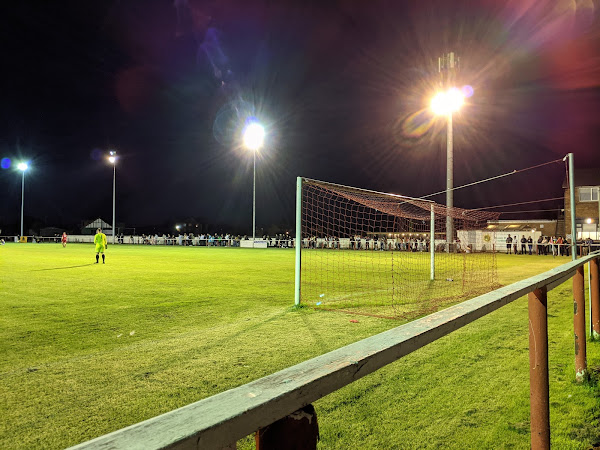 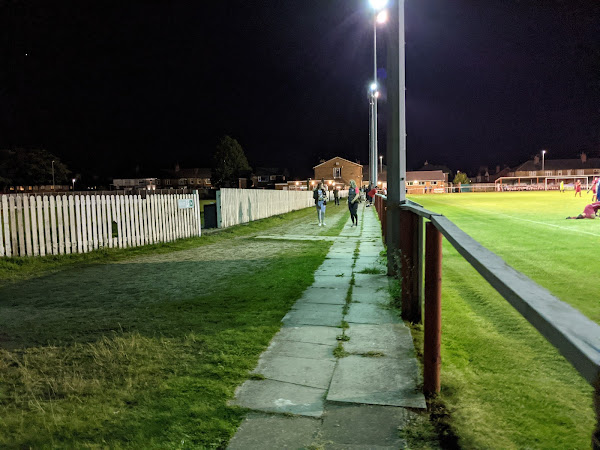 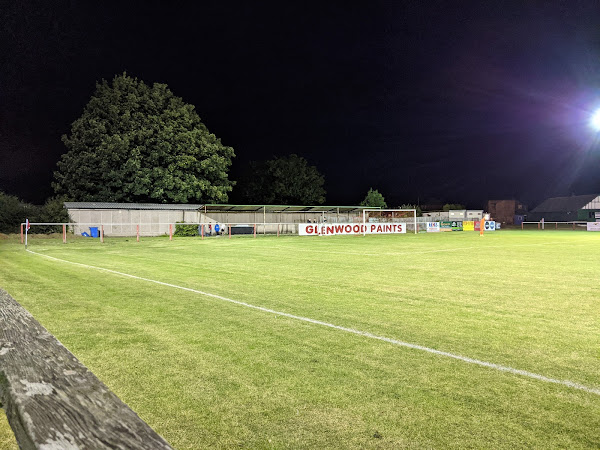 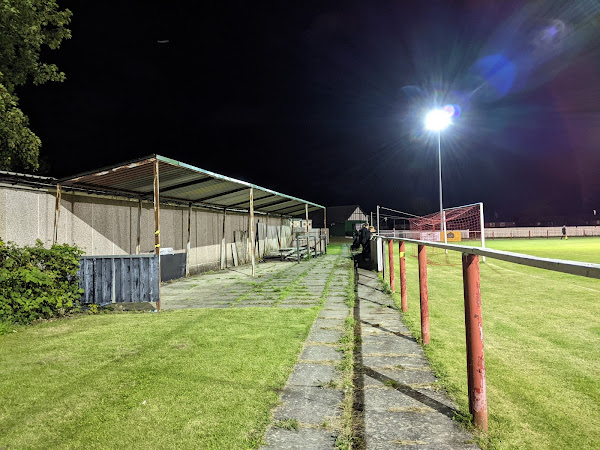 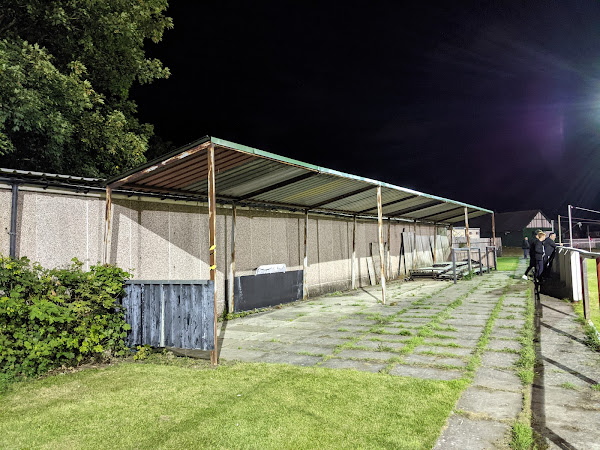 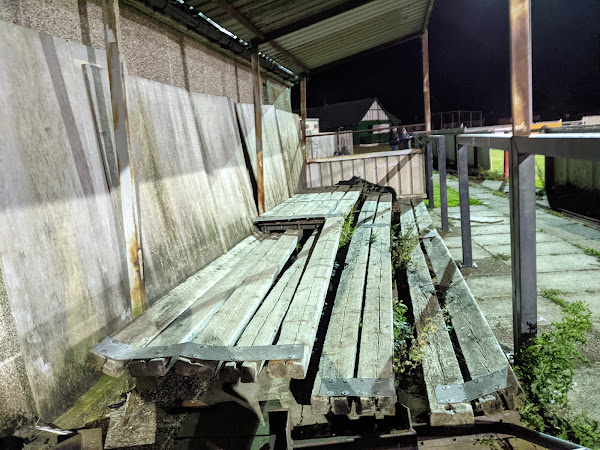 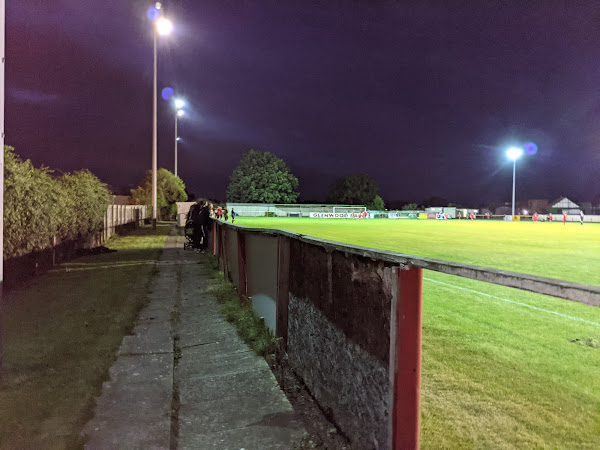 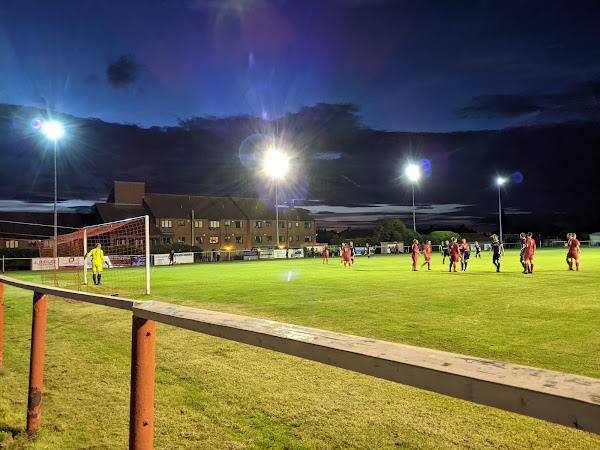