Esh Winning FC
West Terrace
Waterhouses
Esh Winning
County Durham
DH7 9BQ
Official Website
Northern League Page
Twitter
Ground Number: 1000
Thursday 23rd September 2021
Esh Winning 0-1 Easington Colliery
Northern League D2
ESH WINNING FC - A BRIEF HISTORY
The club was established in 1967, through a previous Esh Winning, originally Esh Winning Rangers existed from 1889 until 1934 when they were forced to fold over rent arrears. The modern club was initially known as Esh Winning Pineapple, so-called as they were part of a local social club of the same name. They started out in the Durham Sunday League, finding plenty of success before making the switch to Saturday football and the Northern Alliance in 1981. They would spend a single season here, finishing 6th but in 1982, they would drop the 'Pineapple' suffix from their name and join the Northern League. They've remained in the second tier for the vast majority of their stay here, first winning promotion to Division 1 in 2002 when they finished 3rd behind Shildon and Prudhoe Town. They would last for four seasons in the higher tier, including in 2005 when they had a club-record finish of 14th. However, the following season they were relegated back to Division 2. Promotion would be won again in 2009, another 3rd place finish, this time behind Horden Colliery Welfare and Norton & Stockton Ancients. This time, the stay was only two seasons and since being relegated back, Esh Winning have generally struggled, even finishing rock bottom of the table on a couple of occasions.
In the FA Cup, Esh winning have reached the 2nd Qualifying Round twice, the last being in  2004 as they lost 3-2 at Lancaster City. In the FA Vase, they've reached the 2nd Round on five occasions. In terms of local cups, they won the Ernest Young Memorial Cup in 2008 as well as a host of Sunday League Honours. It was while as a Sunday club that they attracted their record attendance - 1,500 for an FA Sunday Cup game against Liverpool Fantail in 1982. Well-known players to have represented the club include George Camsell, Mark Tinkler and Lewis Wing, all of which have links to Middlesbrough. The village of Esh Winning is near Durham and has a population of around 3.700. The name comes from Esh (a victorian name for ash) and Winning (meaning to collect coal. Bobby Robson was bought up in the nearby village of Langley Park. The ground is in nearby Waterhouses which sits on the banks of the River Deerness. 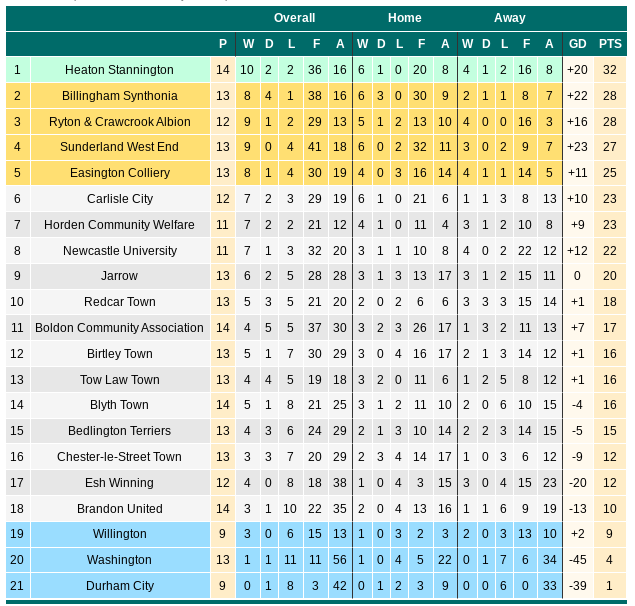 MY VISIT
I'd been wondering when my thousandth ground would fall for quite some time and it was only the Thursday before this game that I knew for sure that it would be exactly a week after. I was faced with two choices - either Newcastle University or Esh Winning. I originally plumped for the former as it was the closest to Newcastle for my coach back but when I decided to extend my trip for a few days, I plumped for the latter. It was a better ground with a more established history. They were also a lot more proactive on Twitter which was a great help. I woke on the day of the game at 8.30 am, having unusually had a good nights sleep two nights in a row. After a shower and getting dressed, I went down to Greggs for breakfast. It was pretty busy and it took me over 10 minutes to get my BBQ Bacon & Chicken Toastie. I came back to my room and was going to watch some videos on my tablet but I noticed I'd hammered through the 10GB £14 data add on that I'd bought a few days earlier. So I had to make do with normal TV while I typed club history for some future blogs. I checked out and as I had four hours until I could check into the Premier Inn, I went and looked around a few shops, buying very little. 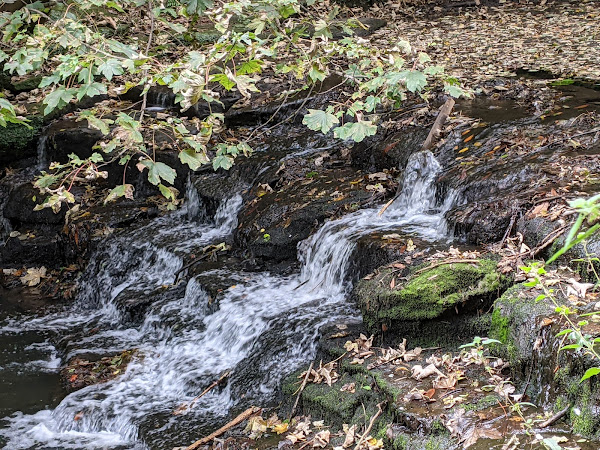 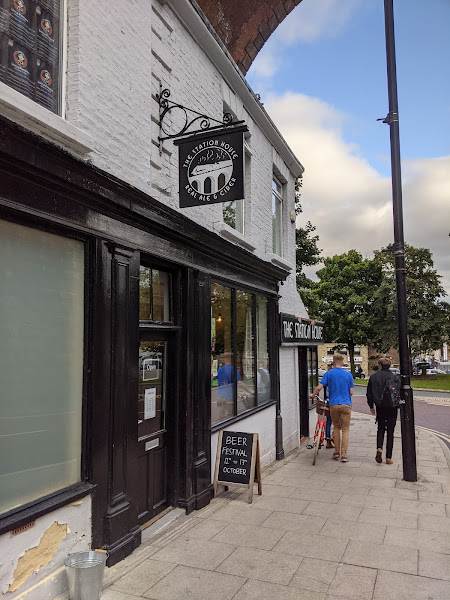 I then took the two-mile walk to Jesmond Dene which was a pleasant park with a small waterfall. I still had time to kill and so I walked to the Tipsy Toad Micropub, which was a bit of an outlier geographically. It had a big selection of ciders, but none of them were especially decent, it was just the bigger brands with good marketing teams. Even so, I had a pint of Gwynt Y Ddraig Celtic Warrior which was pleasant, just not exceptional. From there, I walked back to my hotel, arriving at bang on 4. I quickly chucked my big bag in my room and headed off to the station. I got the 16.43 train to Durham but there were lots of delays around and we didn't leave until 16:49. This deposited me in Durham at 17:03. It was then a few minutes walk to Station House, a brilliant pub. I had a pint of Ross On Wye Michelin Blend and two halves of Ascension Red Grapes and Udders Orchard Luddite with me enjoying all of them. I'd pre-ordered my dinner of salt and pepper chips, Thai green curry and duck spring rolls from a local place and these were excellent, if pricey for the portion size. Though sitting in front of a shop and eating them with a fork was far from relaxing, but needs must. I needed cash, getting out £40 and as a result, just missed out on a bus to Esh Winning. It was another 25 minutes for the next one, but at least I was scheduled to make the game on time. The bus, happily came as scheduled and I was soon on my way. The bus got there at 6 50 and I was at the ground ten minutes later. A fiver was great value for entry. As was £3 for pie, peas, gravy and Bovril. I met a few people I knew and everyone was really friendly. I also later bought lemonade for £1. 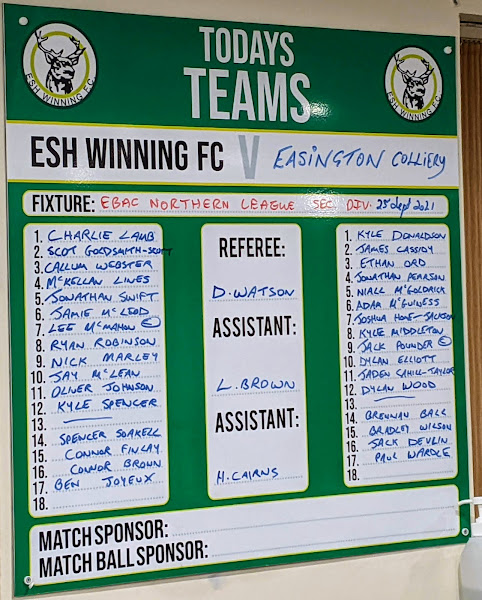 Esh Winning had been in mixed form in the last six games. In the last two games, they'd had a couple of memorable away wins - 3-2 at Chester-Le-Street and 4-3 at Brandon United as well as an earlier 4-3 win at Bedlington Terriers. They had also lost 3-1 against Heaton Stannington, 4-0 at Billingham Synthonia and 3-0 at Horden CW. The visitors had been in decent form, their only defeat in the last 6 being 2-1 at Bedlington Terriers. They'd won 3-1 at Boldon CA as well as beating Horden CW 3-1, Redcar Athletic 2-1, Willington 2-0 and Blyth Town 4-0. Easing started on top and they took the lead on 11 minutes through Adam McGuiness who scrambled home following a cross. Esh Winning came close in a goalmouth scramble of their own on 65 minutes but they just couldn't force the ball home. Easington Colliery put together a well-worked move thirteen minutes from time but the chance was blasted over. Aside from that, two hard-working sides failed to create many clear cut chances and it was a deserved win, just about for Easington.

The goal that got us the three points tonight @adzey0191 pic.twitter.com/NbxRefwMpX

It was a shame for Esh Winning who had been super friendly and a great club to do my thousandth ground with. They presented me with an old shirt at end which will serve as a great souvenir of the night. From there it was 15 minutes to the bus stop. It came on time at 10.02 and got back to Durham within 20 minutes. I could have done without some bloke coughing for the whole journey and I made sure to keep my distance. From there I walked to the train station and didn't have long to wait for my train which got me back to Newcastle just before 11. There wasn't anywhere decent open for a nightcap so I headed back to my room. It wasn't as nice as the Travelodge last night. Some clown, presumably from the hotel had screwed open the window so I had to put up with traffic noise all night. Or at least I would have had to, had I not dismantled their rather shoddy attempt at DIY using the hotel teaspoon. 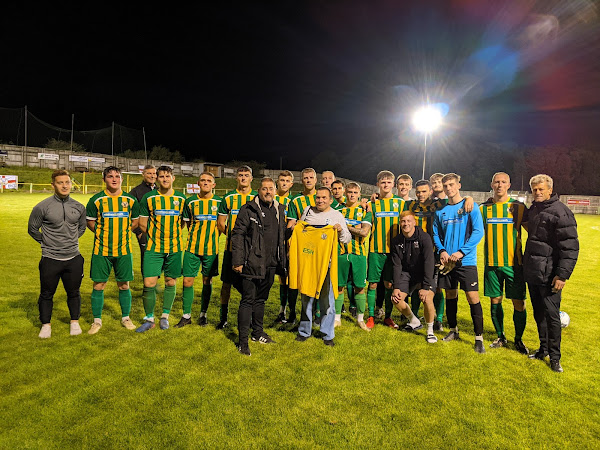 THE GROUND
WEST TERRACE is set in a very remote location and has some great scenery around. There is an attractive main stand of a peculiar design as well as a couple of larger areas of cover adjacent to it. Otherwise, the only other cover is a few random little stands dotted around the pitch. An elevated view can be had from behind a goal with a large grass bank. All things considered a ground and a club that words can't do justice to, everyone was super friendly.
There is a large car park at the ground. Given the remote location, the bus services are quite decent from Durham - every half hour during the day and hourly later on with the last bus back at 11.02 with the bus stop 15 minutes walk from the ground. The food and drink at the ground is good value but if you want something more substantial, it might be worth stopping in Durham. 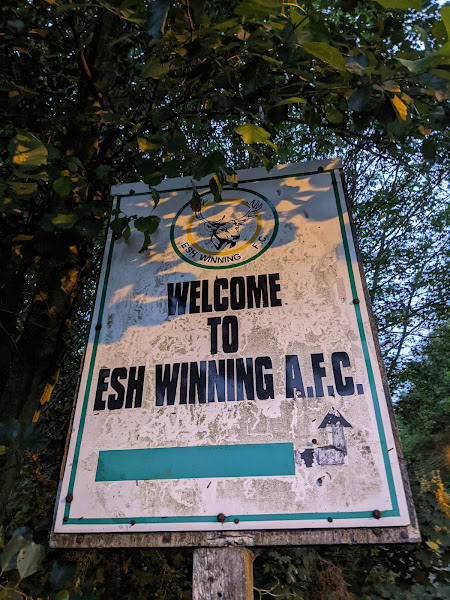 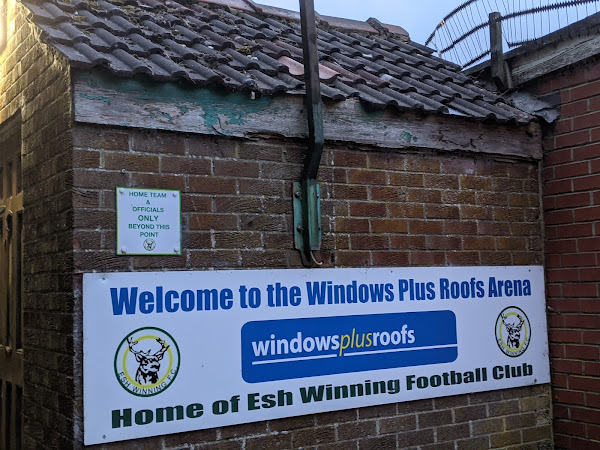 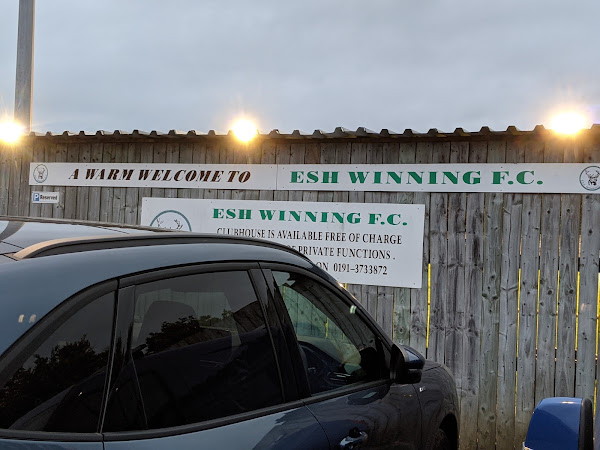 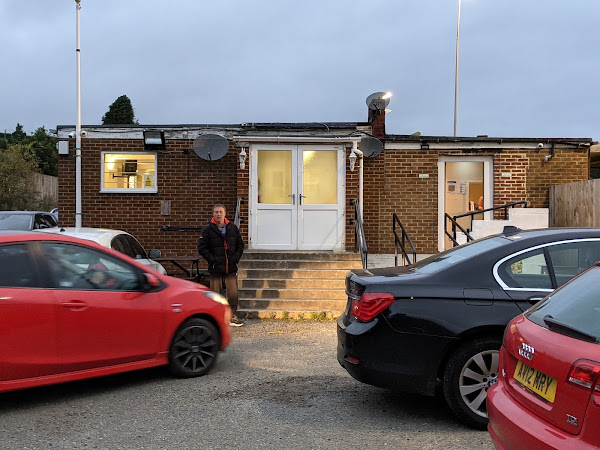 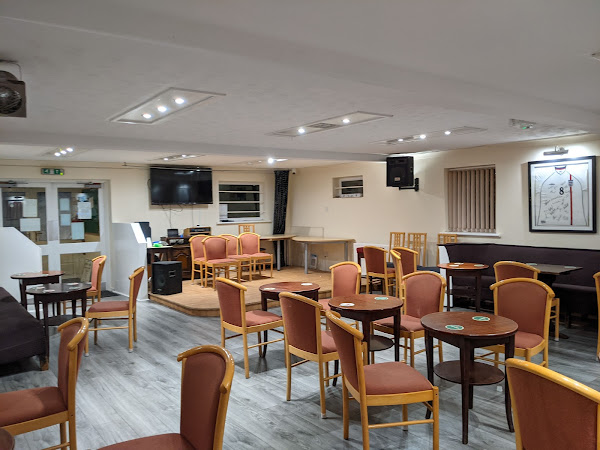 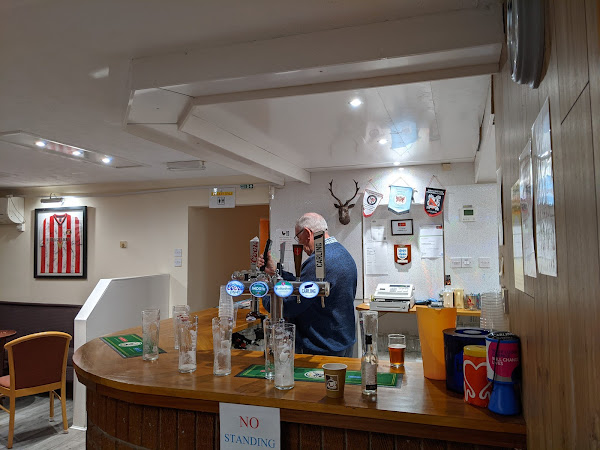 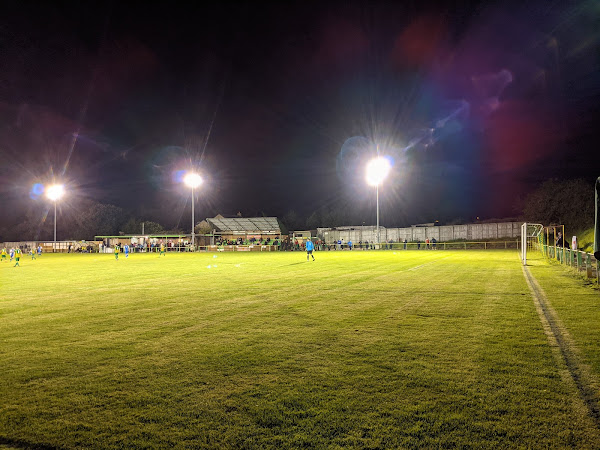 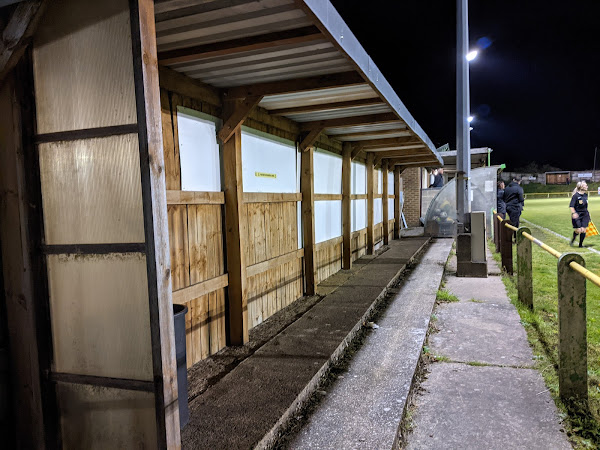 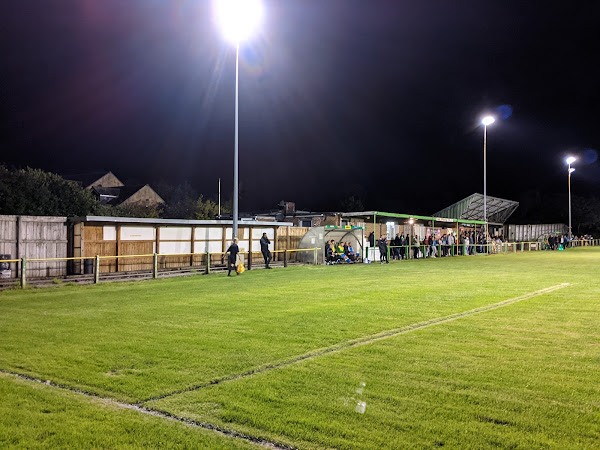 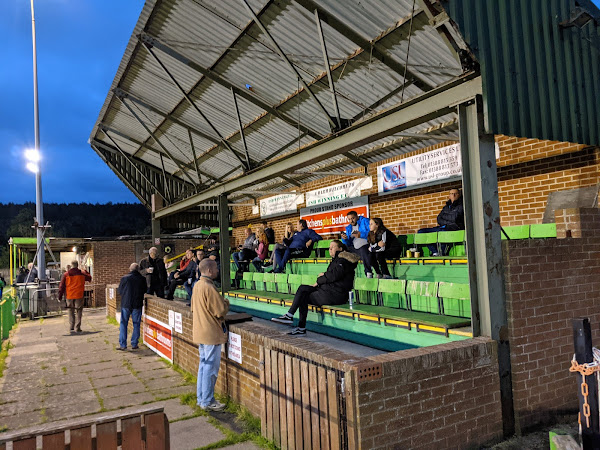 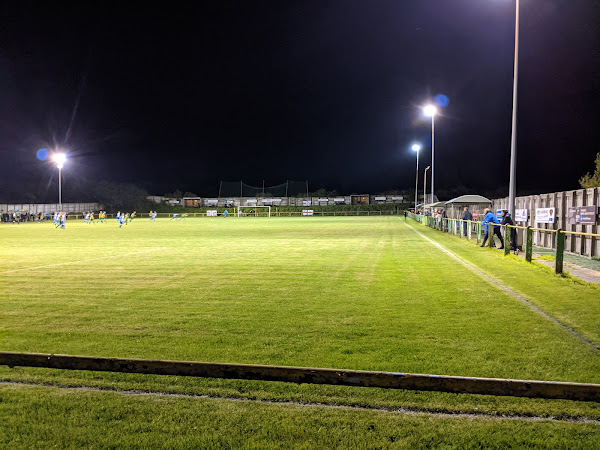 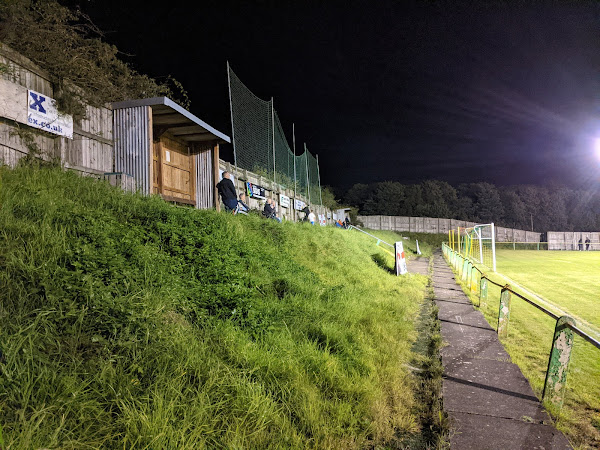 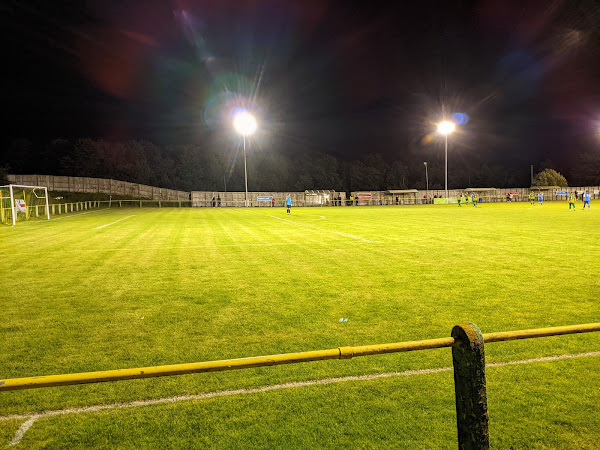 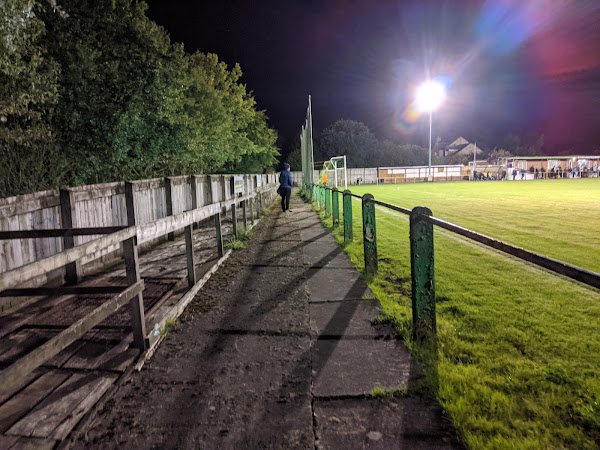 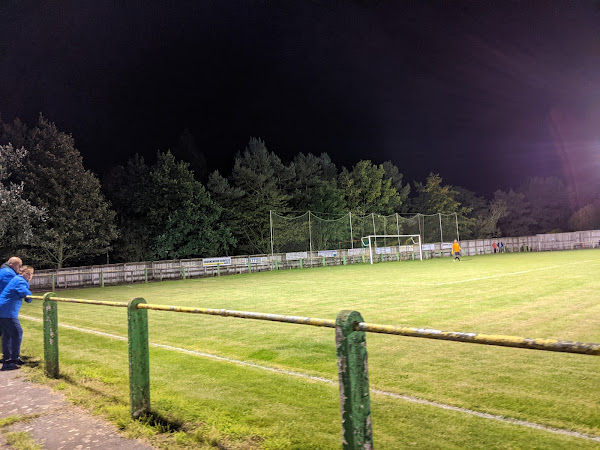 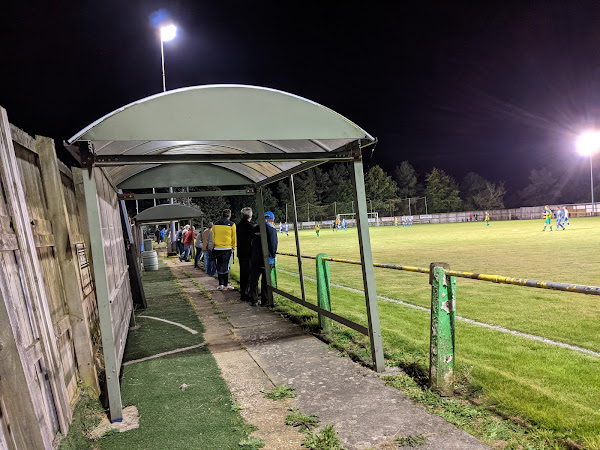 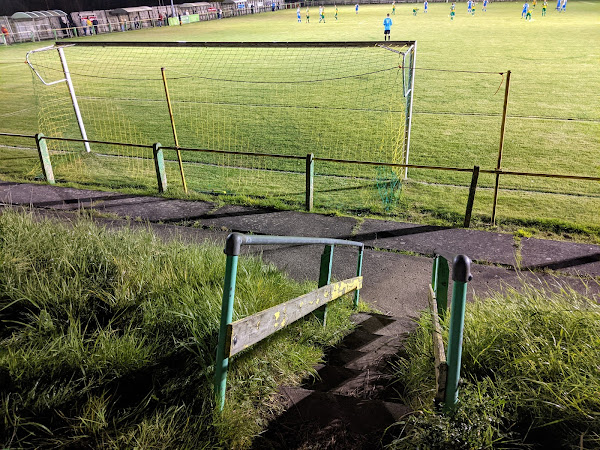