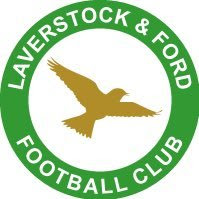 Laverstock & Ford
The Dell
23 Church Road
Laverstock
Salisbury
Wiltshire
SP1 1QX
01722 327401
Sports Club Website
Twitter
Ground Number: 993
Friday 10th September 2021
Laverstock & Ford 5-0 Downton
Wessex D1
LAVERSTOCK & FORD FC - A BRIEF HISTORY
The club was established in 1956 and immediately joined the Salisbury & District League. They played in all three divisions, winning Division 1 in 1971. Laverstock and Ford joined the Wiltshire and Hampshire leagues for brief spells in the late 1980s and early 1990s but returned to the Salisbury & District each time. In 1996, they joined the Hampshire League full-time, starting in Division 3. They struggled but reorganisation in 1999 saw them moved up to Division 2. Form rapidly improved with a series of top-four finishes and in 2003, they were champions, winning promotion to Division 1. They spent one season here before joining the newly formed Lague Division 3. They were runners-up to Paulsgrove in 2006, winning promotion to the newly-named Division 1. Another runners-up spot, this time to Tadley Calleva, saw the club promoted to the Premier Division. The 2010/11 season saw the best-ever finish in the club's history - 17th at step 5. They continued to struggle though, and in 2012 were relegated back to Division 1 where they remain to this day. Their best finish since returning came in 2016 when they finished 5th. Laverstock & Ford were leading the league and unbeaten in 14 games when the league was abandoned last season. This season has seen a dip in form with them sitting 16th at the time of my research.
Laverstock and Ford have had four campaigns in the FA Cup, getting to the Preliminary Round in two of them. Their FA Vase record has been equally unspectacular, with their best effort being the 1st Round on four occasions. In local cups, the club has won the Wiltshire Junior Cup in 1974 and 2000, the Morrison Cup in 1972 and the Stonehenge Cup in 1985. The club represents the villages of Laverstock & Ford which together have a population of 5,500. It is located around a mile away from the larger city of Salisbury. 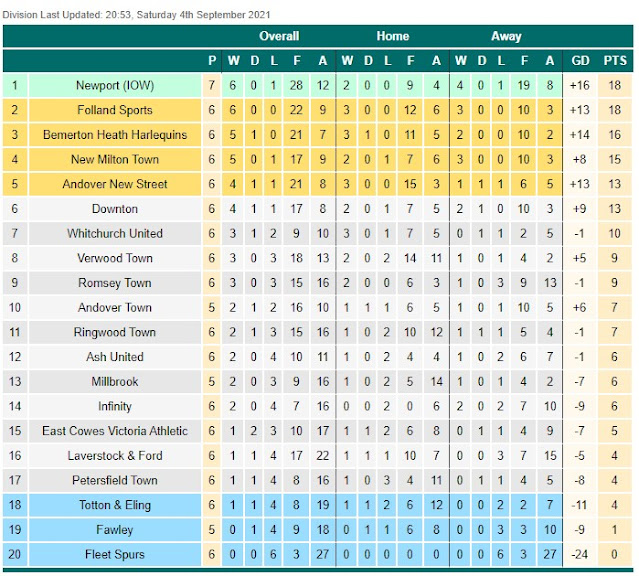 MY VISIT
I was keen to see some more Friday night football as I've always been a big fan of it. I'd been blessed with plenty this season - the first nine Fridays of the season had seen me go to a game. However, last week was different. Without the benefit of my regular Friday night hopper Chris, I decided to give it a rest as my nearest 'unticked' ground was around 150 miles away. It was a decision that I turned out regretting as it was a pretty boring Friday night in with a few cans for me. Keen not to repeat the mistake this Friday, I planned early to go to Laverstock & Ford v Downton. It was one that was within reasonable distance if it was just me, so it wouldn't really work out too expensive if I did it on my own. On Wednesday, I'd opted to stay in and watch the England v Poland game with a few drinks. It ended 1-1 and was a pretty poor game, made even worse by the dreadful ITV commentary. At least I didn't miss much in my potential revisit to Corinthian-Casuals ground as Kingstonian thumped Oxhey Jets 8-1. There was a decent Wessex League game at Baffins Milton Rovers in Portsmouth, but I'd have been on my own and would prefer to save it for a Saturday on the train. I did some planning for future games on Thursday with trips to Wisbech Town and Wakefield in the pipeline. 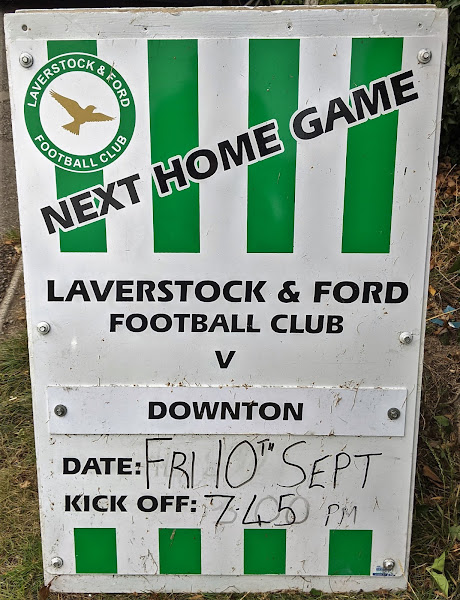 On the day of the game, I had worked as per usual. It was a productive few days with tickets bought to Man City v Wycombe and Gloucester City v Longlevens during my time off. I initially thought I was on my own, but a week and six hours after initially contacting fellow hopper Colin, he got back to me saying that he fancied it. After finishing at 3, I drove home. Due to having an extra passenger, I didn't have much time to rest before leaving at 4. I met Colin at 4.15 and we got on our way. It was a good journey down and we were at the ground by 6.20. We walked to the Chinese across the road, called Classic Aroma. I had my usual of salt and pepper chips with Thai Green Curry. It was a rather pricey £10.45 which was as much as I've paid anywhere. The portion of salt and pepper chips was huge and nice but not hugely flavoursome. The Thai Green Curry was excellent and full of flavour. We made our way back to the ground and sat and ate it on the benches. After a brief look in the bar, we went in, paying £6 for the privilege. Though it was only 7, programmes had sold out but I wasn't too fussed and only buy them to help out the club. 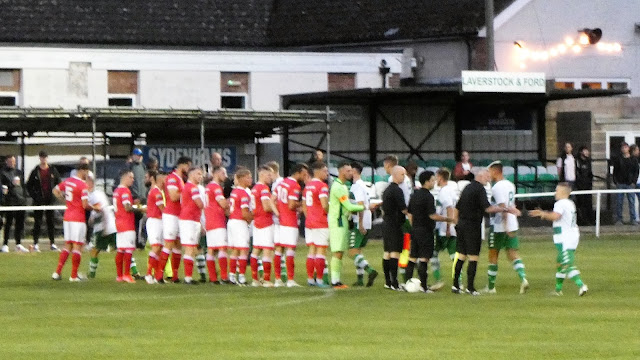 Laverstock & Ford were in 16th place, having won one, drawn one and lost four of their six games so far. They'd started the season with a 4-2 defeat at New Milton Town and gone on to lose 6-2 at Ringwood Town, 5-3 at Newport IOW. They'd also lost 4-2 at home to Romsey Town but on their own patch, they had thumped Fleet Spurs 6-1 and drawn 2-2 with Petersfield Town. Downton were in 6th place and had the opposite record to the hosts, having won four, drawn one and lost one of their six games. They'd started the season disappointingly with a 2-1 home defeat to Folland Sports. However, they had recovered to win 6-1 at Ringwood Town before a 2-2 draw at Bemerton Heath Harlequins. They were on a run of three consecutive wins - 4-3 against Andover Town, 2-0 against Newport IOW and 2-0 at Ash United. The game started and the first notable incident was a Downton player getting injured by a challenge. The Scottish linesman made me laugh by telling the injured player 'Calm down petal, the referee knows what he is doing, no need to get upset'. If there was any time anyone was going to get upset though, it was this local derby. Just 8 miles separated the two sides and it showed with plenty of scores to settle.

Laverstock and Ford 1-0 Downton in a fierce local derby. pic.twitter.com/PwlyCfJ41C

Downton had Dan Clarke sent off on 12 minutes for what seemed a fairly innocuous challenge, although I was quite a way away. Despite going down to ten men, the visitors were still edging the game. Another Downton Player, James Clark was sent off on 23 minutes and this time it was fully deserved as it was a really late tackle. This turned the game in the hosts' favour but Laverstock & Ford were wasteful with their finishing. On 40 minutes, there was another scuffle and allegations of a headbutt but nothing came of it. Just before halftime, Laverstock were awarded a free-kick around 25 yards out. The effort took a strange bounce right in front of the keeper and ended up in the back of the net from Archie Lovegrove. The second half saw the visitors briefly shine and they twice come close with lobs. The hosts had the ball in the net but after a long discussion, the goal was disallowed.  On 67 minutes, Laverstock were awarded a penalty but the Downton keeper made a great save to keep it out. They eventually made it 2-0 on 73 minutes, an excellent shot from the edge of the area by Chae Sykes which found the bottom right-hand corner. The hosts ran riot in the last ten minutes, Dominic Jackson finished from the edge of the area on 82 minutes and then put home a cross from the right at the back post three minutes later. On 87 minutes, Tommy Campbell-Smith completed the rout with a curling shot into the top right-hand corner.

It had been a great game to watch and a fiercely contested local derby. We'd noted that the reverse fixture would be on 22nd October and duly pencilled it in to go to. A later learned out that there had been over 300 in attendance for the game. We left at 9.45 and had a good journey home. The Wycombe Wanderers show and the Home Radio Grassroots Plus podcast kept us company on the way back with me dropping Colin off at 11.15. As ever, he spent five minutes talking and checking that he had everything before I left, but was excellent company as ever. I was home at 11.30 and watched Coronation Street whilst typing my blog. It was a sober Friday as I'd had a few drinks with the England game on Wednesday, but I've got a decent day out in London planned for tomorrow. I got off to bed around 1 am in the end, having enjoyed another good night at football. 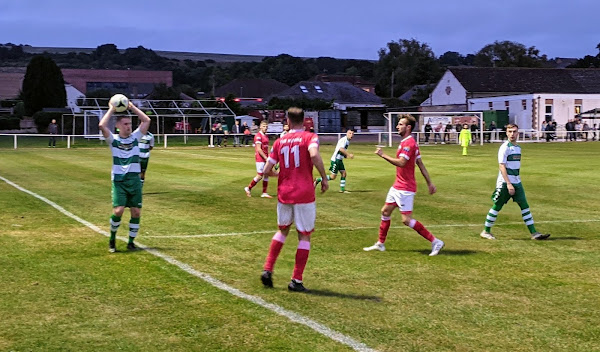 THE GROUND
THE DELL is a nice quaint setting for a ground, with rolling countryside and hills behind the near goal. Sadly the two seated stands are of the Arena type but at least they have the club name on them. There are around 100 covered seats across these and also a small scaffold terrace holding 50 standing. The rest of the ground is open. There's a tea bar at the ground with hot drinks and food. A smart bar offers a decent range of drinks and has Sky TV. Across the road are a chippy, a Chinese and a One-Stop shop. There is also a decent amount of parking at the ground and it is accessible on public transport, a mile or so from Salisbury. 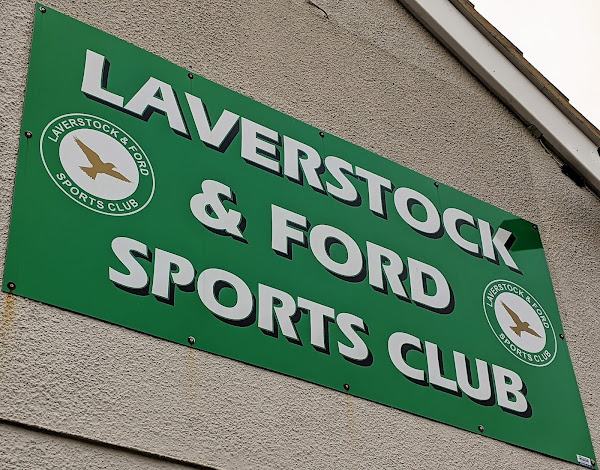 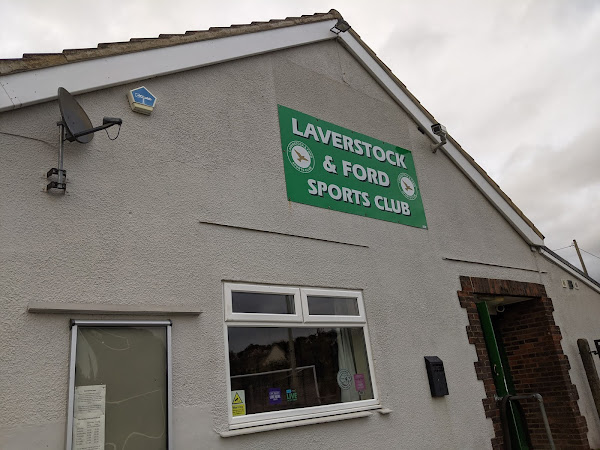 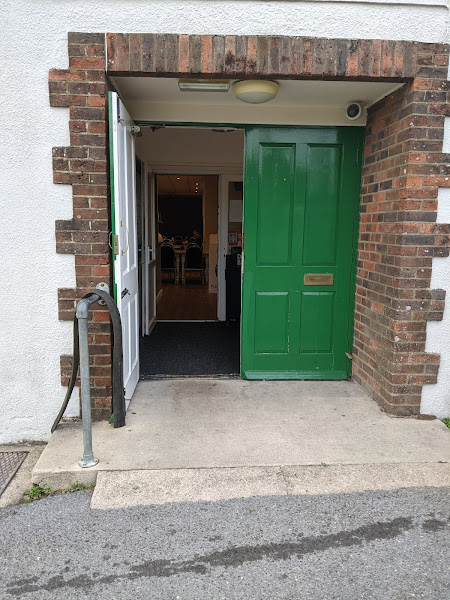 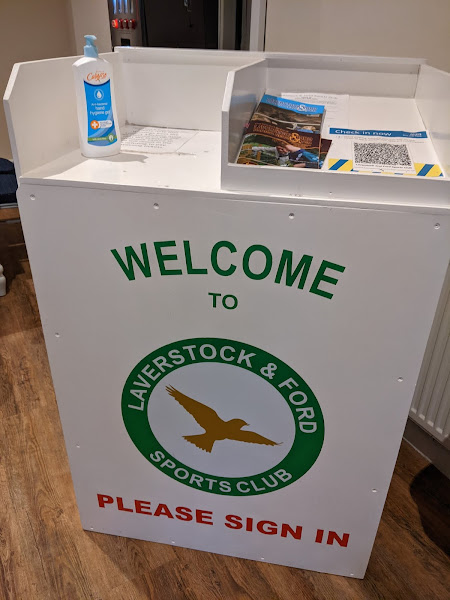 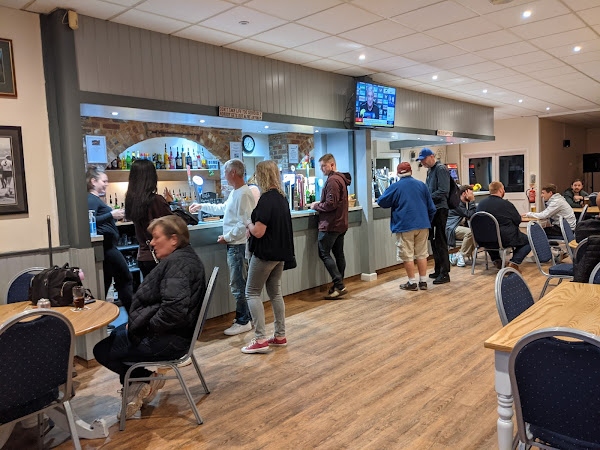 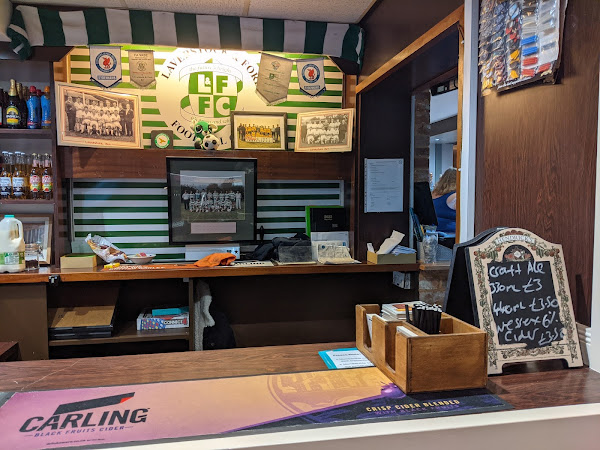 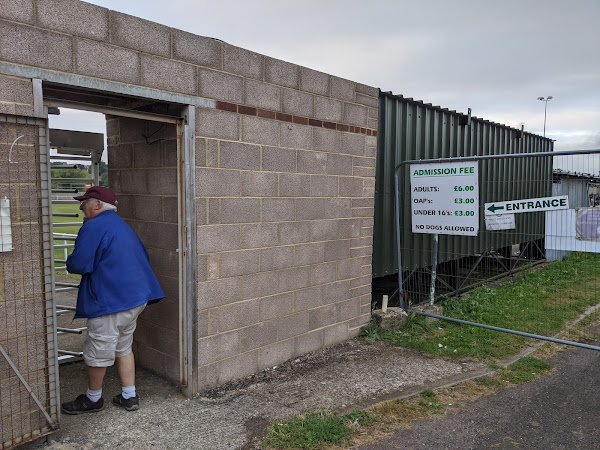 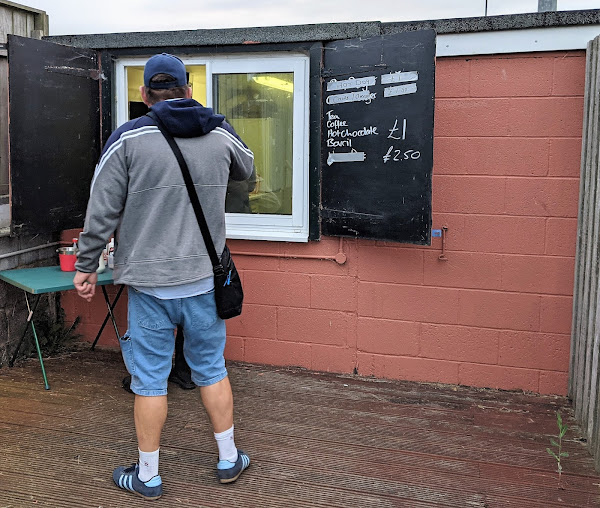 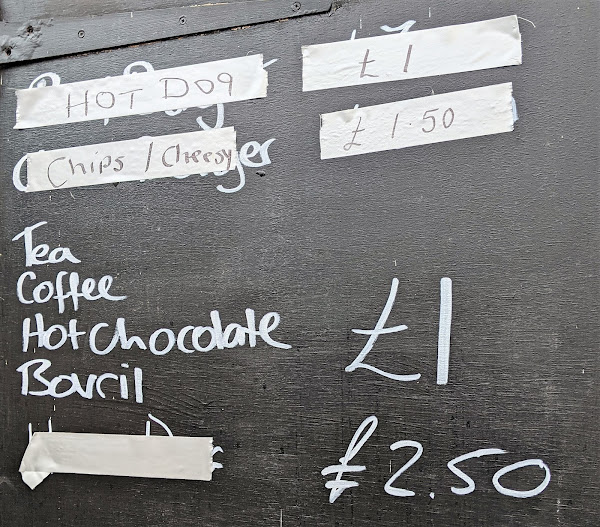 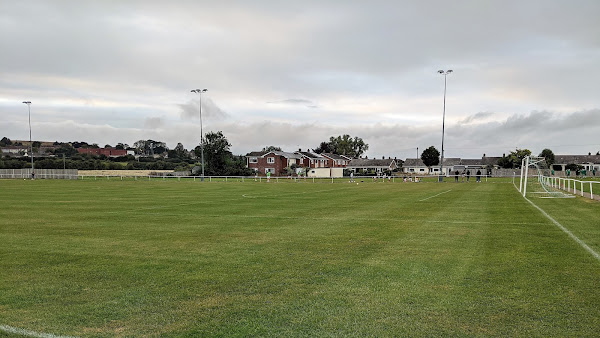 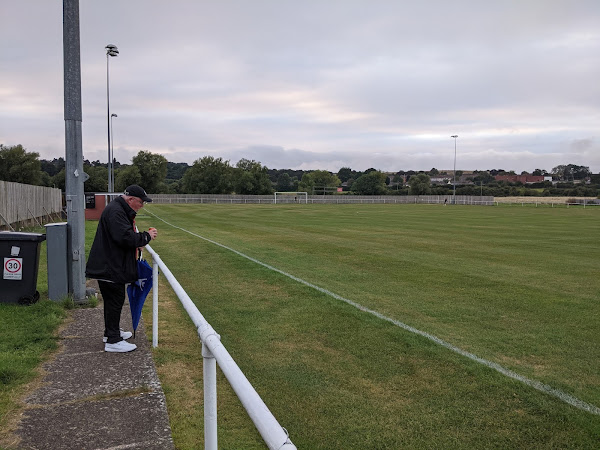 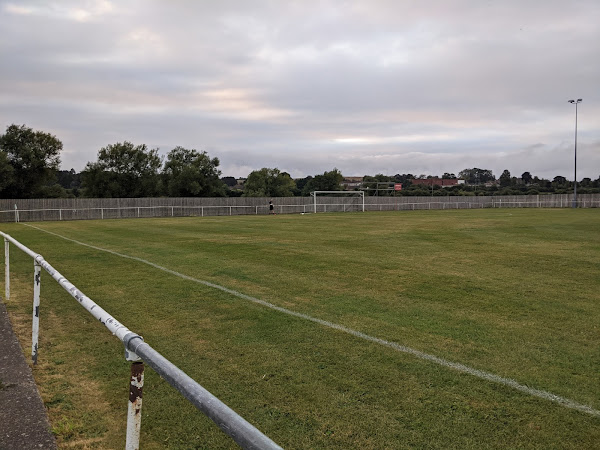 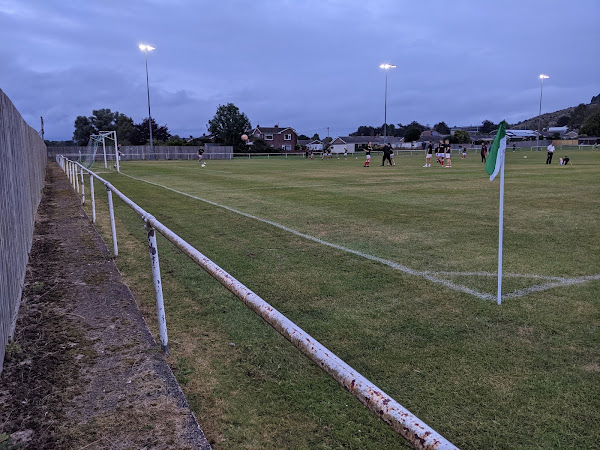 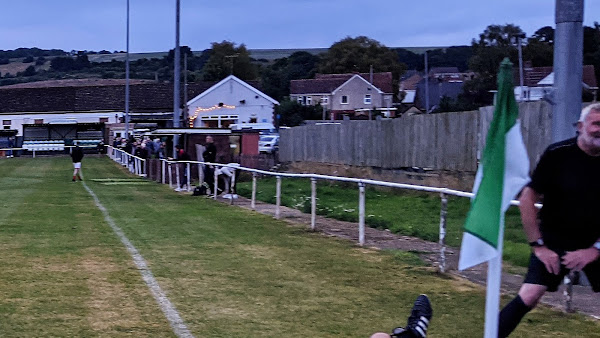 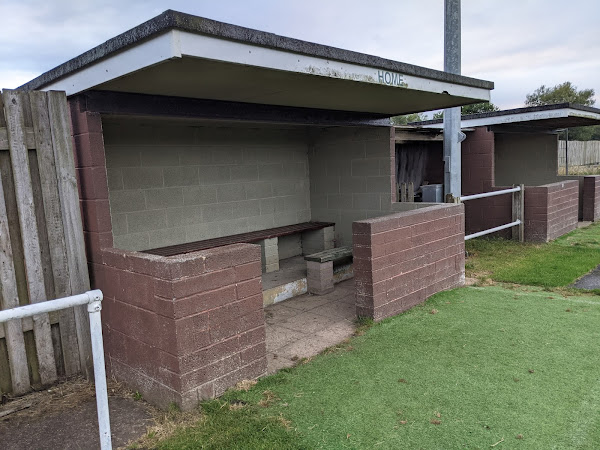 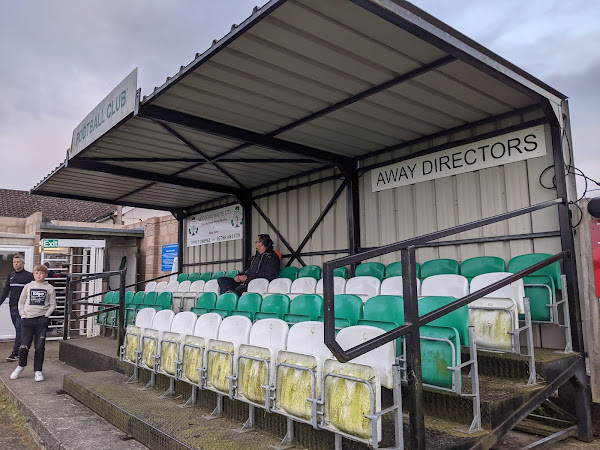 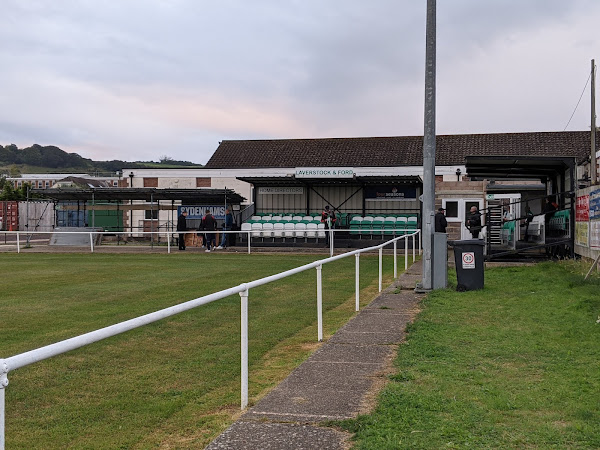 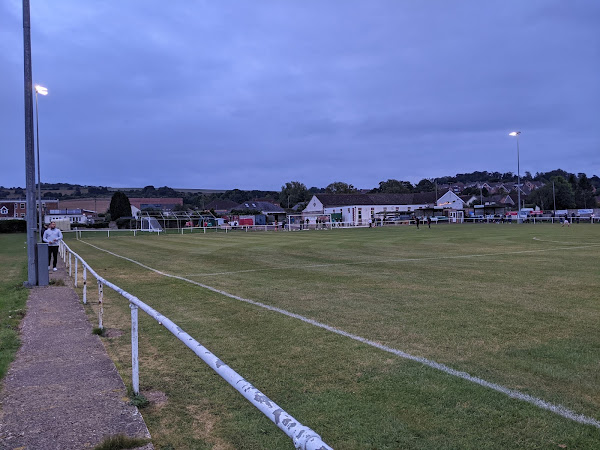 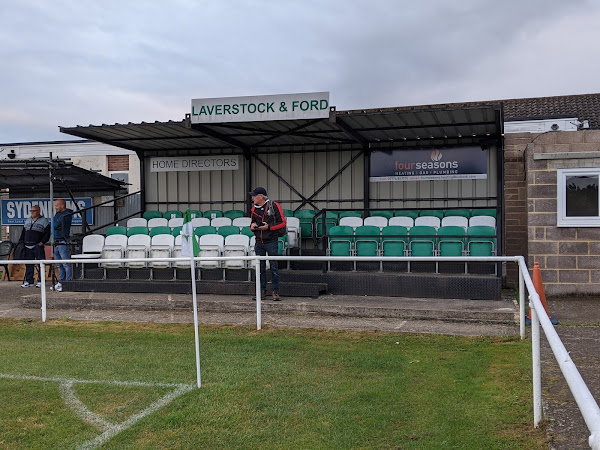 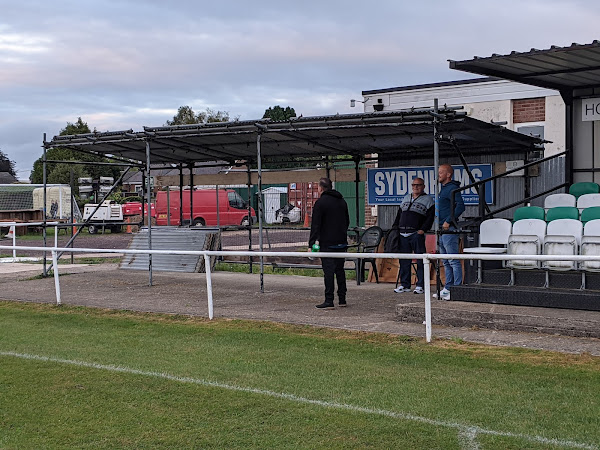 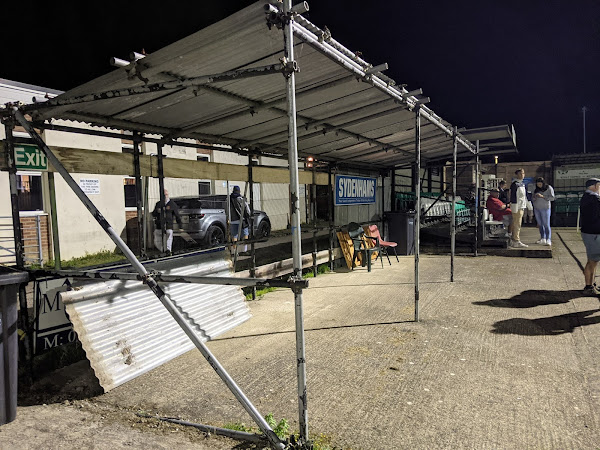 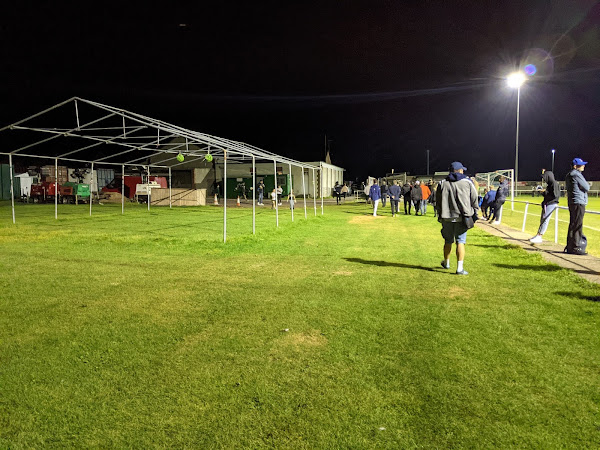