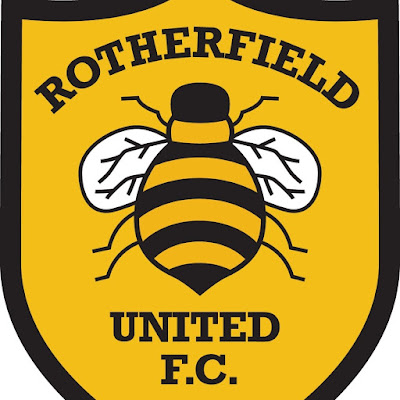 Rotherfield United FC
Bishopswood Sports Ground
Horsepond Road
Gallowstree Common
Oxfordshire
RG4 9BT
0845 094 1206
Official Website
Twitter
Ground Number: 964
Wednesday 16th June 2021
Rotherfield United - Wargrave
Thames Valley D1
ROTHERFIELD UNITED FC - A BRIEF HISTORY
Rotherfield United FC was established in 1973. There is not a great deal about the club's early years online, but they joined the Reading League in 2012, this was renamed the Thames Valley Premier League a couple of years later. The club participated in the top tier Premier Division at step 7 for five seasons, the highlight being a pair of 9th place finishes. In 2017, the team were relegated to Divison 1. They've never really troubled either end of the table since their demotion, prior to today's game, they sat in 7th place. The club has many sides including first team, reserves, walking football and a number of junior sides. 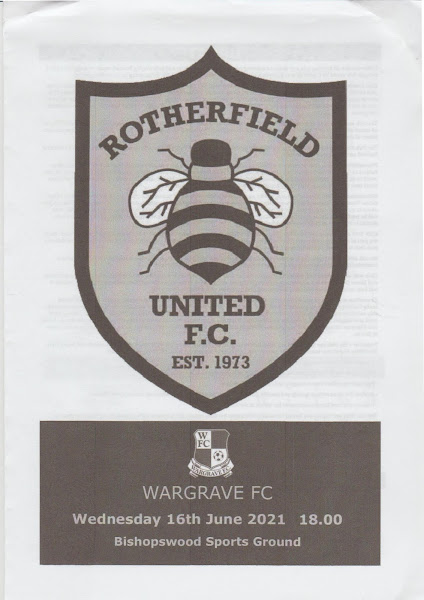 There was a previous team who used this ground, Peppard (known as Sonning Common Peppard until 1990) competed in the Chiltonian, Combined Counties and Hellenic Leagues. The highlight of their history came in the 1990s when they were champions four seasons in a row from 1990-94 - twice in the Chiltonian and twice in the Combined Counties. They remained here until 2001 when ground grading forced a move to Palmer Park in Reading. However, they folded after one season here as the pitch was too narrow. The ground is in Gallowstree Common which is a hamlet in South Oxfordshire, near the Berkshire border. The nearest towns are Henley & Reading, whilst the larger villages of Peppard and Sonning Common are close by. It once had a pub called the Reformation from the Breakspear Brewery but this has since closed.

Sources used: Wikipedia, FCHD & Football, Wherever it may be. 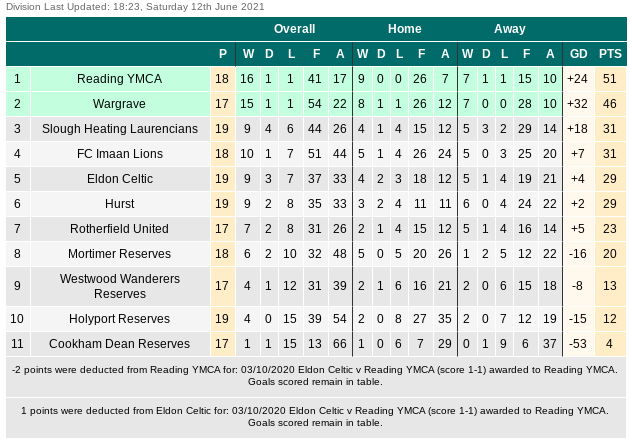 MY VISIT
I'd had a visit to Rotherfield United pencilled in for some time, having seen it on the YouTube channel, Groundhopping FC. It was a decent facility, with a railed pitch, well worth a visit at just over twenty miles from home. Originally, I'd planned to go on a Monday in May, but crazily, it was called off due to a waterlogged pitch. There were two chances for me to go this season, either this Wednesday or the following Saturday. I opted for the midweek as it was local and there was more potential for games on Saturday. The day before I had my annual service and MOT. The result was a £632 bill or 6p per mile which was my best cost result for around seven years (since I had my Peugeot). The one negative was that I needed two new tyres - £213 for the pair when I could have got them done for £100 new or £50 part worn at other garages. To be fair, the tyre that they used was similarly priced at my preferred place, but I'd not have gone for such a fancy brand myself. Overall, I was pleased with the result though and I'd charged a fair price to other hoppers for lifts based on previous calculations. Over the years, the costs have worked out from 3p per mile (2013/14 when I did over 18,000 miles in my Peugeot) to 11p a mile (2008/09 when my Seat Ibiza was on its last legs). 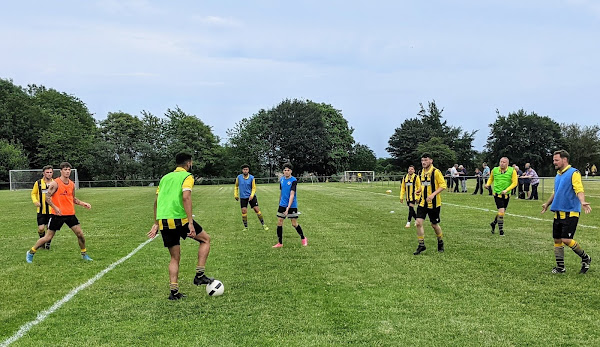 I was working on the day of the game from 8-3, so I had time to go home for a bit before I set off for the game. Anwar was coming originally, but he pulled out early afternoon due to illness. Luckily, it was nice and local for me, so I'd still be making the trip. My only concern was the game going ahead, as lots of teams pulling out with the old chestnut of 'couldn't raise a side'. I've no problem with this when clubs gove good notice - there is other things in life than football, after all. But maybe persistent 'offenders' should be told that 'we couldn't raise you a place in next seasons league'. It had affected the integrity of the league in some ways, with Wargrave's title rivals Reading YMCA gaining a couple of walkovers in recent weeks. It was the same case a few weeks ago when I'd been due to go to Hurst v Wargrave, only for the hosts to pull out on Thursday. I used my time to catch up on TV and look for games for Saturday. In all reality, I think it will be another game in the Thames Valley League, probably Twyford & Ruscombe v Richings Park Reserves with Henley Town as a backup. With me aiming to make 200 games next season, it would have been great to crack on - however, the nearest unticked grounds were at Newtown & AFC Darwen. After getting my stuff together, I left at 4.50 with the game still showing as on. It was a reasonable drive over with me getting there at 5.40. Lots of people had parked outside and I saw why as there was vicious speed bump as soon as you got into the car park. There was a deluge of groundhoppers with a few familiar faces but no sign of the players. It turned out that the kick-off had been delayed until 7 which made perfect sense, I just wish that the league website had been updated. I killed the hour before the game looking at Football Traveller for fixtures and reading magazines on my tablet. There was an attendance of 33 and a kind hopper had produced a limited amount of programmes for the game. 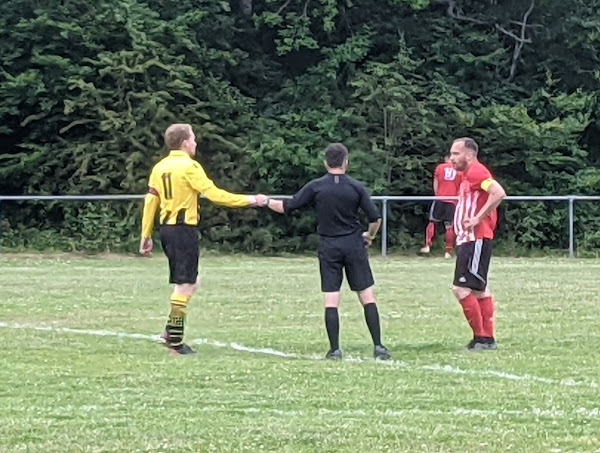 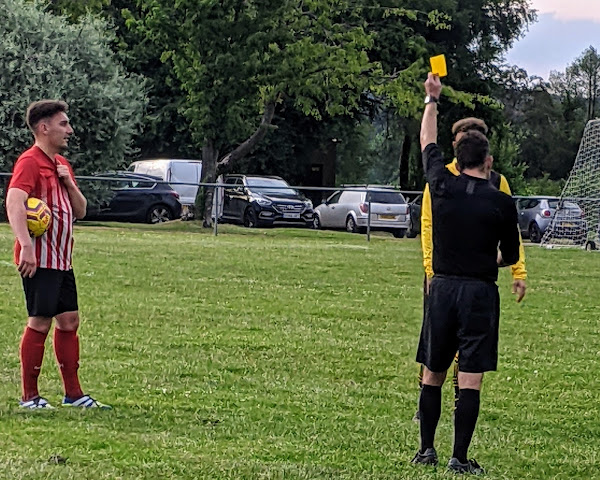 Rotherfield United had enjoyed a thumping 8-2 win against Cookham Dean Reserves on Saturday. However, their form had been mixed with defeats to Reading YMCA, FC Imaan Lions and Hurst in the previous three games. Wargrave were in a battle with Reading YMCA for the title and they'd been in sparkling form recently. They'd beaten Eldon Celtic 3-0 and  FC Imaan Lions 6-4. There were a couple of blips in May with them having only managed a 2-2 draw with Slough Heating Laurencians and a 3-2 defeat to Hurst but they'd won every other league game.  Wargrave needed to win all three games for the title, also hoping that rivals Reading YMCA slipped up in their last game. It was 1-0 to Wargrave on 28 minutes, a drilled shot from the edge of the area by Sam Wild finding the bottom left-hand corner. Wild got his second on 33 minutes, this time a high shot into the net from outside the area. The game was fairly equal and the hosts had plenty of chances but they were wasteful with them. Rotherfield ended up having a player harshly booked for a tackle. Later on, his teammate accused the tackled player of milking it in an attempt to get the player a £15 fine and in return got called a 'little bitch'. Wargrave were awarded a penalty on 53 minutes following a trip and Stuart Moss converted the spot-kick with aplomb. Rotherfield United pulled one back on 58 minutes, a back-post header right on the line by Kane Bateman following an excellent cross. Wild completed his hat trick on 70 minutes following a neat run and finish. The visitors had a fair few chances towards the end as they looked good value for their lead. The Rotherfield #9 hit the bar with a great shot but it ended on a sour note for #10 after he got frustrated at the referee refusing to tell him how long was left. The game ended 20 seconds later amid drizzle. I made a hasty retreat, leaving at 8.50 and got home 40 minutes later. 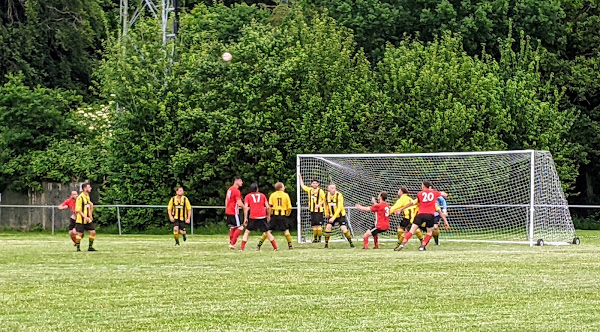 THE GROUND
THE BISHOPSWOOD SPORTS GROUND is a great venue for the level. It's a multi-pitch complex with the main pitch railed off. There are a few signs to let you know who plays there. Parking is plentiful. There are no facilities for food and drink at the ground from what I saw. There is a pub called The Greyhound not far away and a Chinese takeaway less than a couple of miles away if you are peckish. Overall, it's a well kept and pleasant place to watch a game of football. 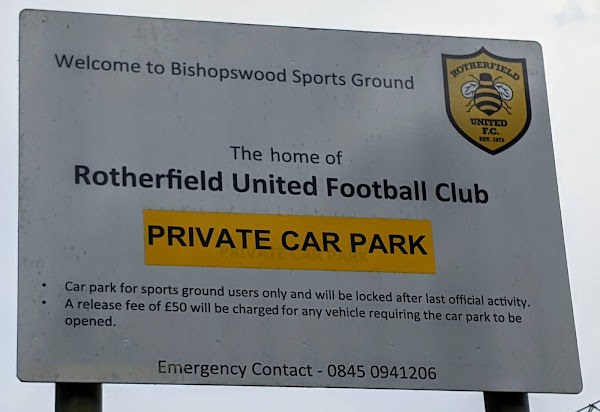 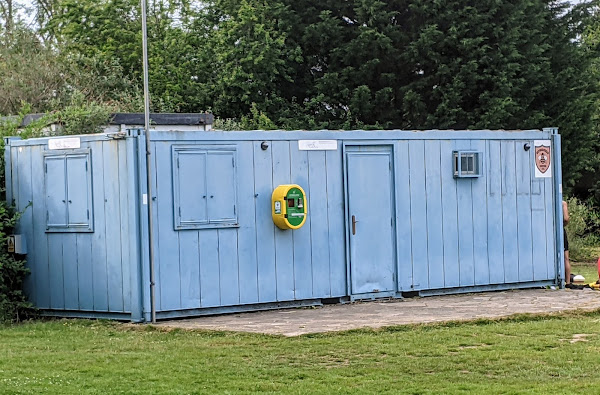 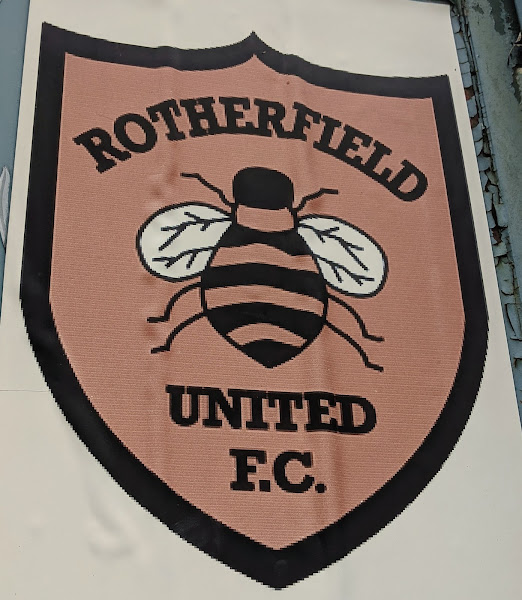 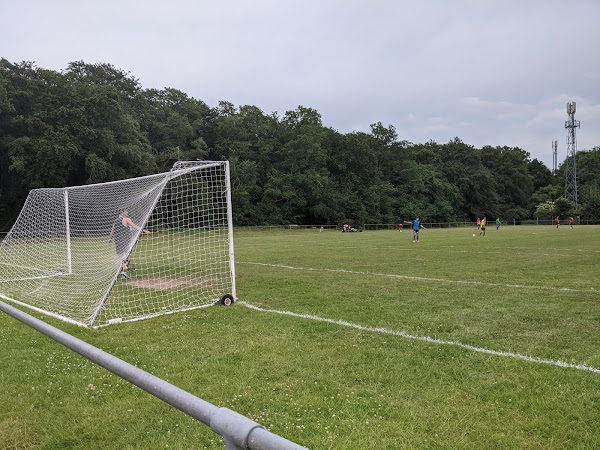 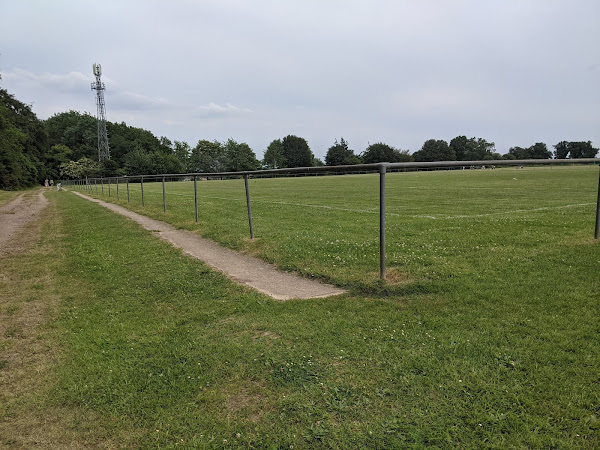 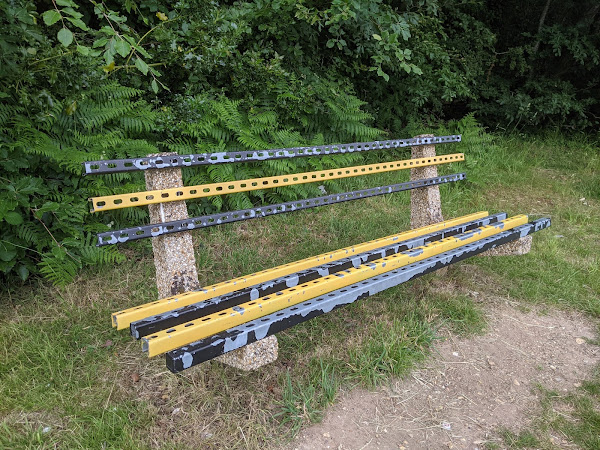 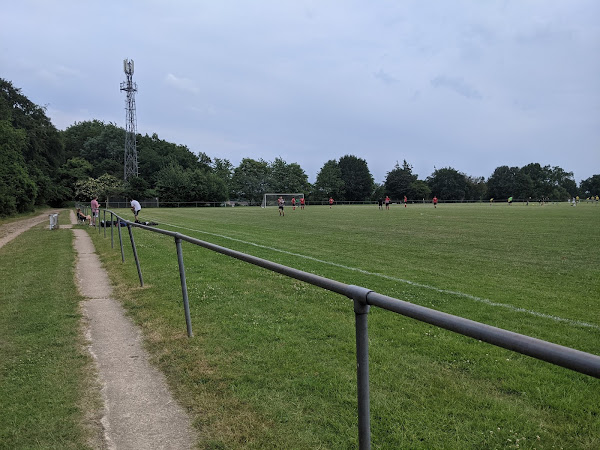 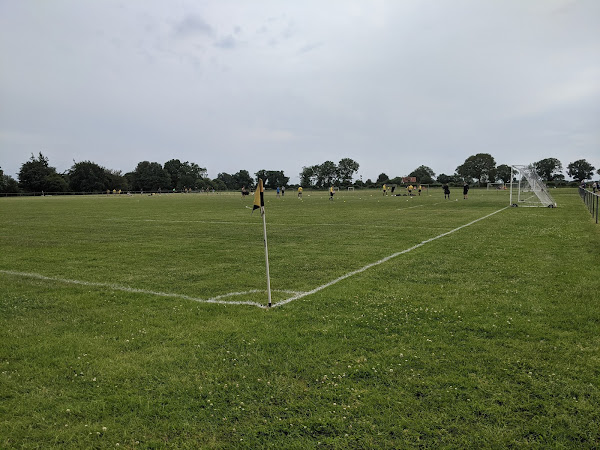 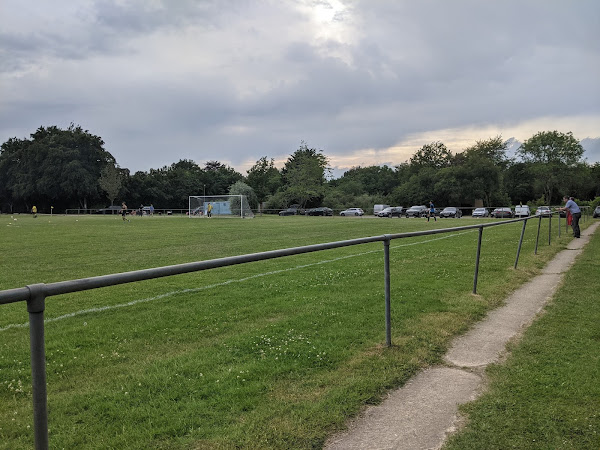 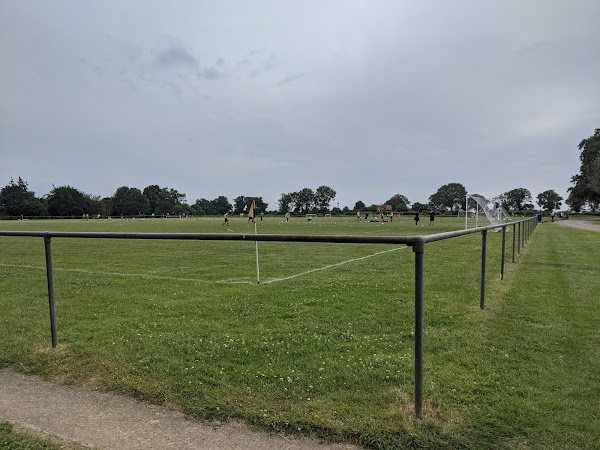 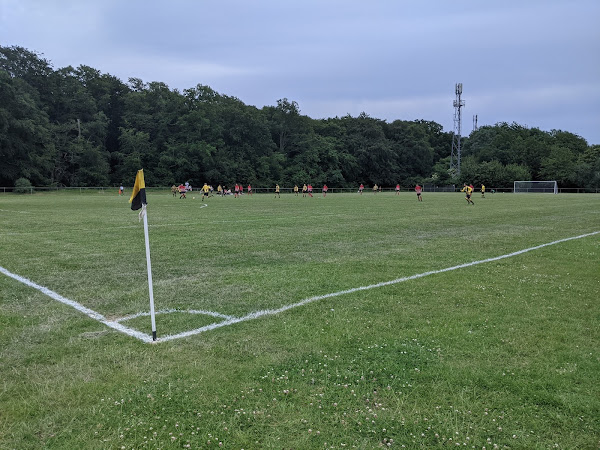