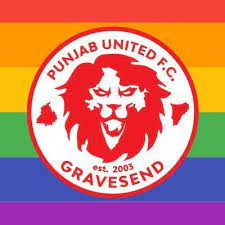 Punjab United FC
The Steve Cook Stadium
Elite Venue
Dunkirk Close
Gravesend
Kent
DA12 5ND
01474 323817
SCEFL Club Page
Twitter
Instagram
Ground Number: 963
Saturday 12th June 2021
Punjab United 4-4 Lordswood
Medway Post Lockdown Tournament
PUNJAB UNITED - A BRIEF HISTORY
The club was established in 2003 and played for some time in Sunday football, mainly the North Kent Sunday League. Although the club name may suggest otherwise Punjab United FC is open to members and players 'regardless of age, race, religion, sexual orientation or ability. Their ethos was to bring a more entertaining brand of football and a more ethical approach to football for all age groups. The club made the switch to Saturday football in 2016 and was an immediate success. They joined the Kent County League at their step 7 Premier Division, winning the league at the first time of asking. With the facilities in place, they made the step up to the Southern Counties East Division 1. Again, they won the league at the first attempt, gaining promotion to the SCEFL Premier in the process. Their first season at step 5 saw results tail off, as they finished 17th. The last two seasons have seen the team in 15th & 16th when the two seasons were abandoned.
Punjab United first entered the FA Cup in 2019 and the game was covered live on the BBC iPlayer and Red Button as they narrowly lost 1-0 to Broadbridge Heath. This season saw them share an exciting 3-3 draw at Stansfeld, but they went out in the Extra Preliminary Round again, losing 4-3 on penalties. In the FA Vase, the 2019/20 season saw the club's best run. They beat Selsey 5-0 and Loxwood 3-2 before losing 3-0 to Newhaven in the 1st Round. In terms of local honours, the club won the Kent Intermediate Challenge Shield in 2016/17. Punjab United share the town of Gravesend with Ebbsfleet United who play in the National League South and Guru Nanak who play in the Kent County League. The population of the town is 74,000. It has one of the largest populations of the Sikh community in the UK of more than 15,000 and is home to a very pretty Sikh Temple. It is situated on the River Thames and Medway Canal and passenger ferries run to Tilbury. Pocahontas, the first female Native American to visit England. She was taken ill on her return voyage to America and died aged 21 after coming ashore at Gravesend. She was buried under the chancel of St George's parish church. 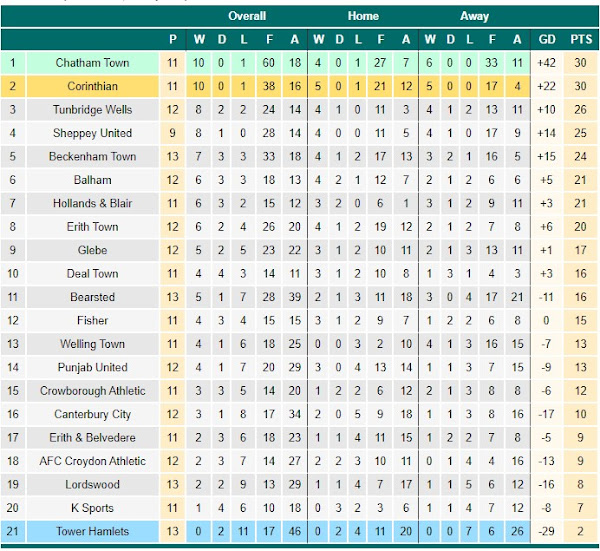 MY VISIT
Once again, this was a game that I had planned in around a month ago when the fixtures for the tournament were announced. Once again, I'd be doing it on the train and thanks to my railcard, tickets were acquired for the bargain price of under £18 return from High Wycombe. The early kick-off meant that I'd have to alter my plans from normal Saturday, but it had its benefits. I'd be limited to Wetherspoons beforehand, but it looked like it was a decent one. There appeared to be great food at the ground and there was a nice looking Micropub called the Three Pillars for after. I planned it all pretty much down to a tee on the previous Monday, taking the fastest trains and avoiding an accidental trip to Haddenham & Thame Parkway as happened last week. It was a quiet week with no football and so I started planning for the future. To be more specific, looking at the fares that I can get with my railcard. The best value appeared to be in Kent where pretty much anywhere was affordable. Weymouth and that sort of area was less so, with fares appearing to be double the cost of elsewhere. Euro 2020/1 kicked off on Friday night and I watched a dull game as Italy comfortably beat Turkey 3-0. I had a couple of bottles from my new cider delivery but was in bed by 10.30. 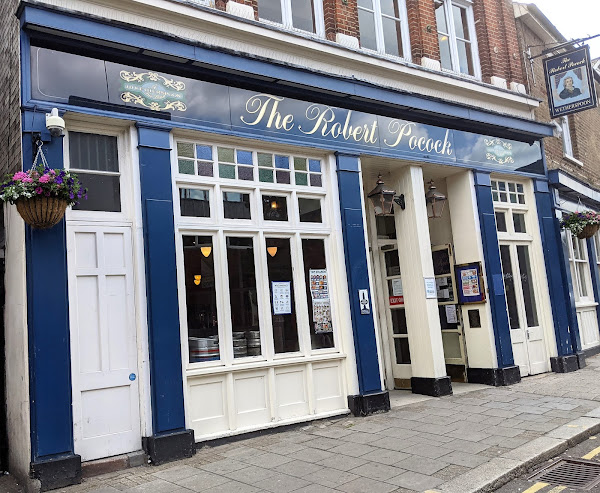 I awoke early on the day of the game, around 4.30am. Unable to get back to sleep, I watched TV for a few hours before getting up. I had some breakfast and got dressed before leaving at 8.10. It was a pleasant walk to the station, taking around an hour. A return train ticket was secured for £17.80 with less than ten minutes to wait for my train. I got to Marylebone at 10.09, meeting Colin and Anwar before a quick dash across London on the underground. We were at St Pancras in plenty of time for our 10.55 train. It was a super quick train to Gravesend with us getting there at 11.17. I had a quick walk to the Robert Pocock Wetherspoons for a pint and a half of Black Dragon cider whilst the other two looked around the shops. The pub was fairly busy so it took 10 minutes for it to arrive. I had my drinks and started walking towards the ground. I was there at 12.40, meeting up with the lads. It was £5 entry and we got a nice free badge. I was keen to sample their food and over the course of the afternoon, spent a tenner on a curry pancake roll, a samosa, a chicken kebab and some chips. It was slightly more expensive than you'd expect to pay from a takeaway, given the portion sizes. But it was all delicious and helped the club out financially. 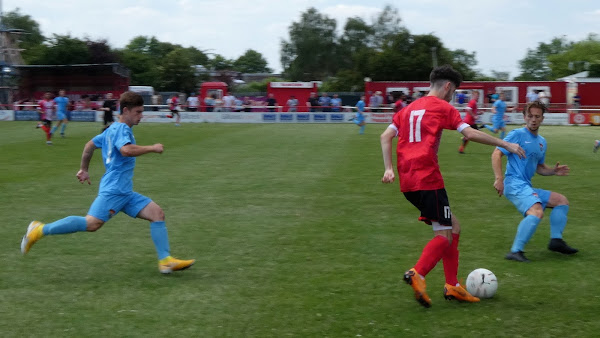 Both teams had mixed results so far in the tournament. Punjab United had lost to Sheppey United (2-3) and Chatham Town (0-3). They'd drawn 3-3 with Chatham Town and beaten Rochester United 4-1. Lordswood had lost to Sheppey United (2-4) and Chatham Town (0-3). Their only win had come against bottom side Rochester United where they won 1-0. In the reverse fixture, Punjab United had a comprehensive 8-0 win at Lordswood. On Tuesday, Lordswood played their game in hand, drawing 1-1 at Rochester. It was a quick start to the game and the hosts took the lead after just five minutes when Arun Suman finished from the edge of the area, following a square ball. It was a close-range effort on 20 minutes that levelled affairs. Suman put Punjab back in the lead on 42 minutes but not before trialist 'Jack' cleverly beat the offside trap before finishing past the home keeper. Sixteen seconds into the second half, Lordswood were awarded a penalty for a foul and up stepped Kieran Sharp to make it 3-2 to the visitors. On 59 minutes, Suman shot home the equaliser from the edge of the area to complete his hat trick. Lordswood retook the lead on 63 minutes, Harley Gorse seizing on a defensive error to see his side lead 4-3. The hosts had a penalty of their own on 70 minutes, Luke Adams stepping up to complete an incredible afternoon of scoring. There could have been more goals too, but it was not to be. Both sides had chances to win it, but couldn't convert. 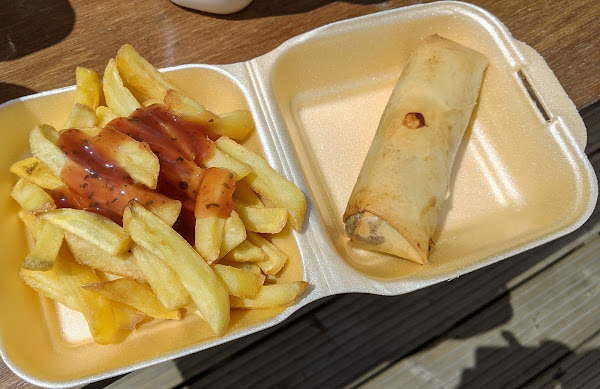 Also in attendance was Mark, a Tonbridge Angels fan that I'd seen at Lordswood a few weeks back. It had been a great game, a real goalfest with lots of action. It was credit to both teams on what was a real scorcher of an afternoon. After the game, I made my way to my planned Microbar, the Three Pillars. It was disappointing for its selection of ciders, but seeing as I was there, I had a pint of Broadoak Pear & Chilli. It was a light one at 4% but too sweet for my liking. At least it was a fairly light one at 4%. From there, I headed to B&M Bargains, picking up a big bottle or Irn Bru for £1. It was a short walk to the station, with me getting there 15 minutes before my train left at 16:42. Hardly anyone was bothering with masks now, except in crowded areas. I think everyone was sick of the jerk in charge of the country lecturing people on what to do when it was he whose incompetence had let the Indian variant run wild. My ticket was not working when I got to the barrier, so the guard let me through. I stopped to tick off another Wetherspoons, the Barrel Vaults in St Pancras Station as I wanted to cool off. The now customary pint of Black Dragon was had for £4.99. Again it was busy and this time my drink took another ten minutes to come. It slipped down easy and I was in a good mood. From the station, I walked to the Underground taking a few nice photos on the way. It was good to see John Motson's dulcet tones on the tannoy reading various announcements. After my transfer across London, I got the 18.12 from Marylebone and this deposited me in High Wycombe at 18.50. I stopped at Wok Express to try out their salt and pepper chips. A pricey one at £3.95, a huge portion but fairly average taste. I was home at 8.20, playing Jay's Virtual Pub Quiz with the family. I'd eaten and drunk loads, walked 16 miles and got a bit sunburnt, but all in all, it was a good day. 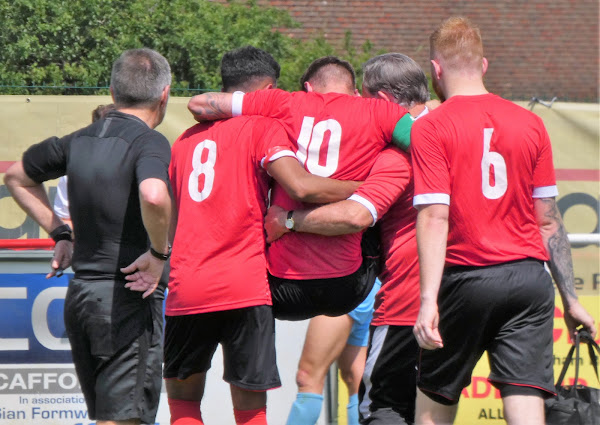 THE GROUND
THE STEVE COOK STADIUM or ELITE VENUE is a decent ground for the level. All the covered accommodation is on one side, three small stands holding around 250 in a mixture of seating and standing. The rest of the ground is open hard standing with the dugouts providing segregation towards the two ends, should it ever be needed. There's also another railed pitch worth a visit in itself behind the far side.
Food is by far the best thing about Punjab, as well as the friendly welcome of course. There's a wide range of Indian food, all at fair prices. The best value for me was the Curry Roll and Chips or £3.50. Drinks are also available in cans. The town of Gravesend is just over 30 minutes walk away and of the two places I tried, the Robert Pocock Wetherspoons is your best bet. 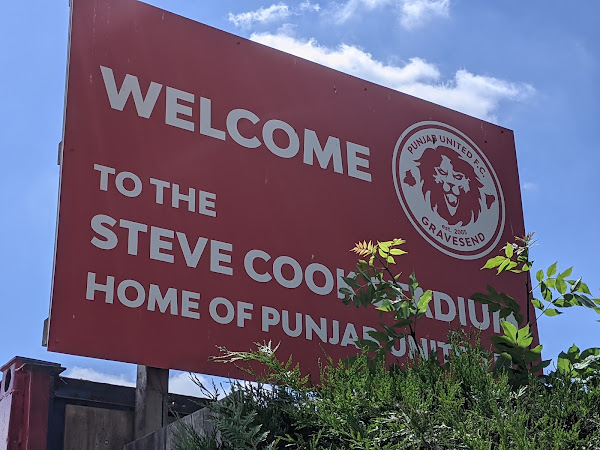 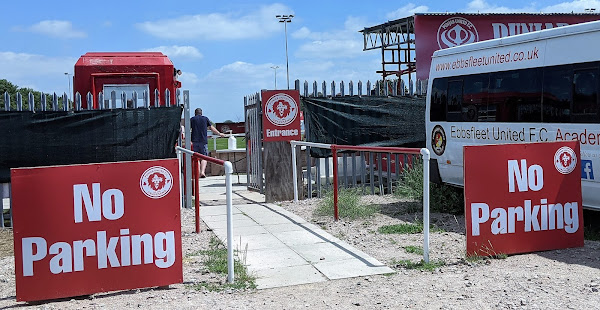 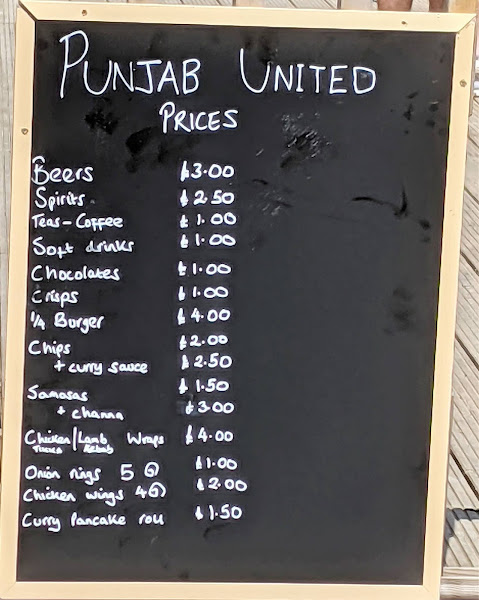 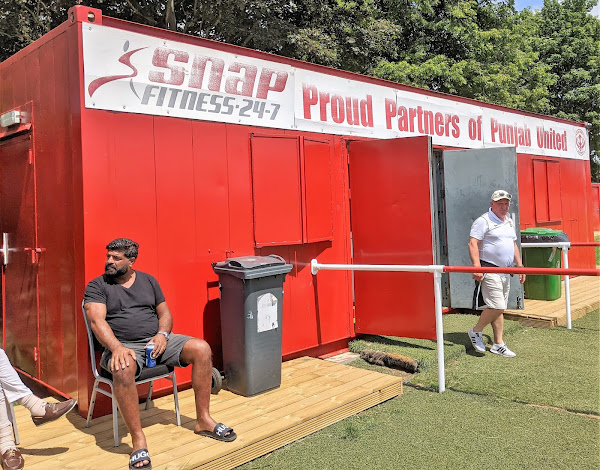 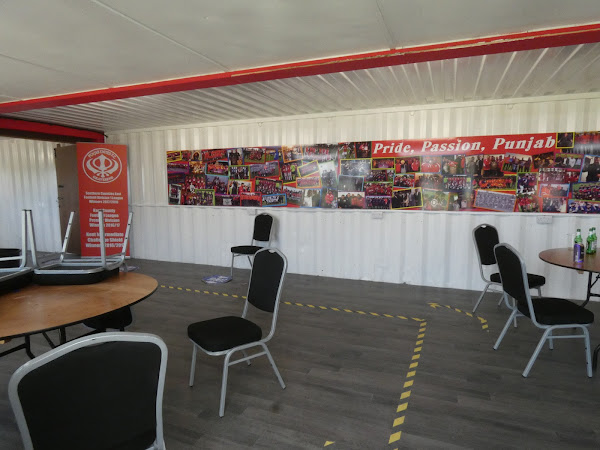 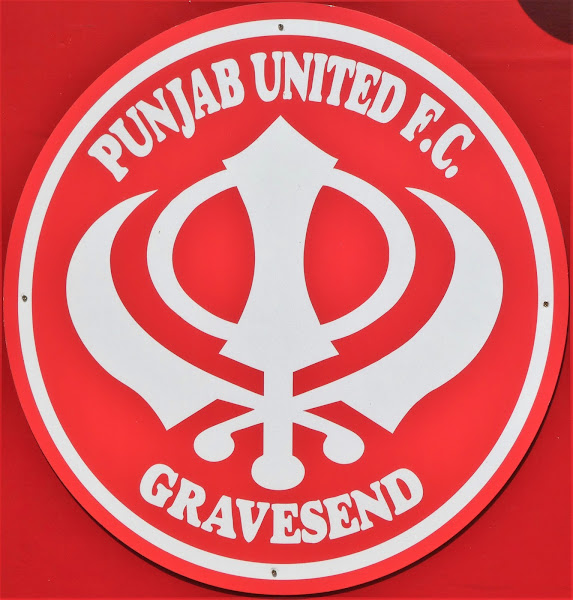 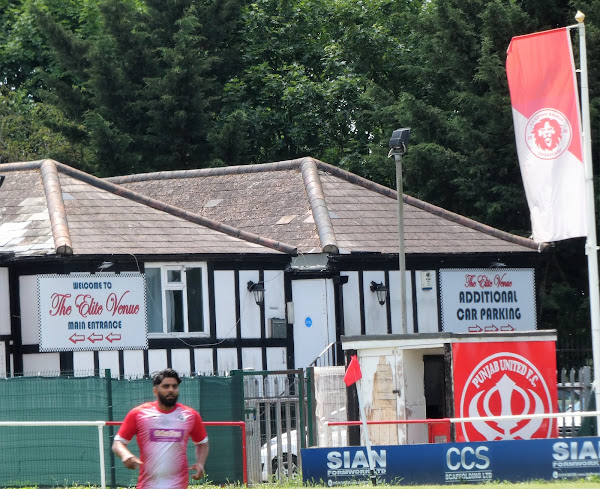 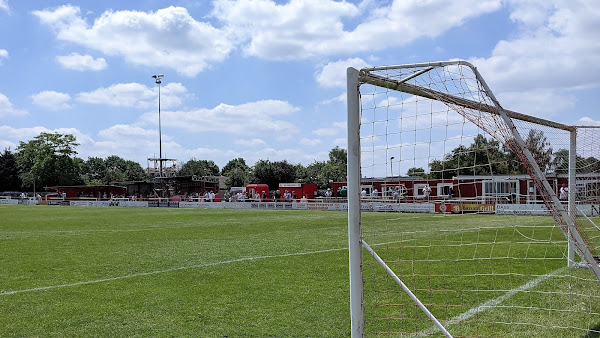 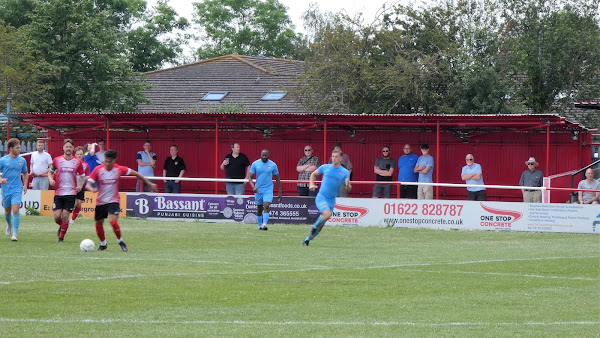 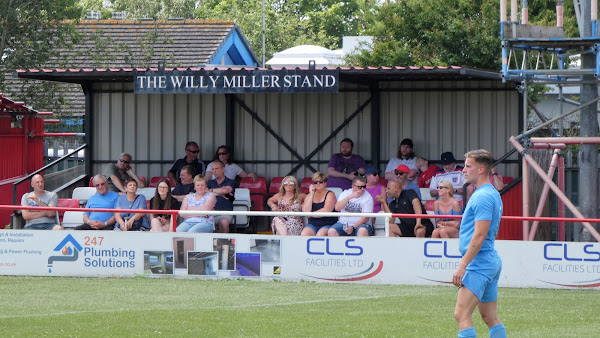 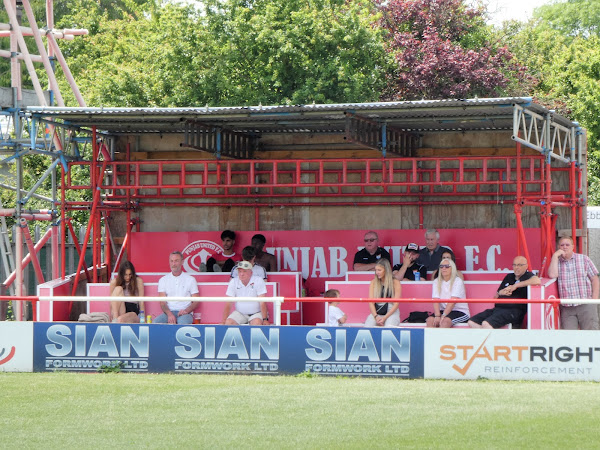 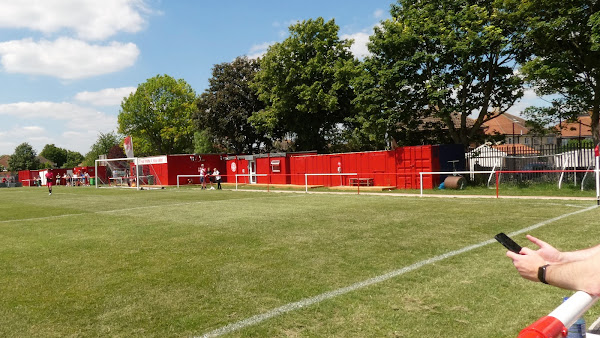 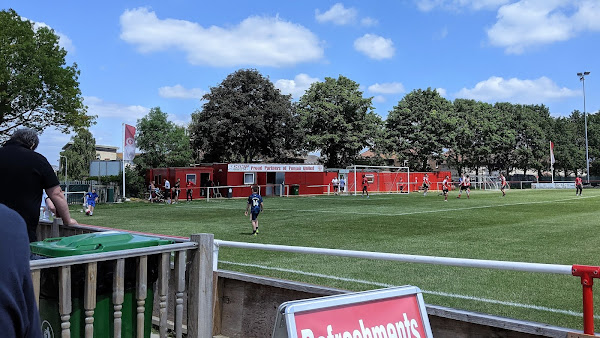 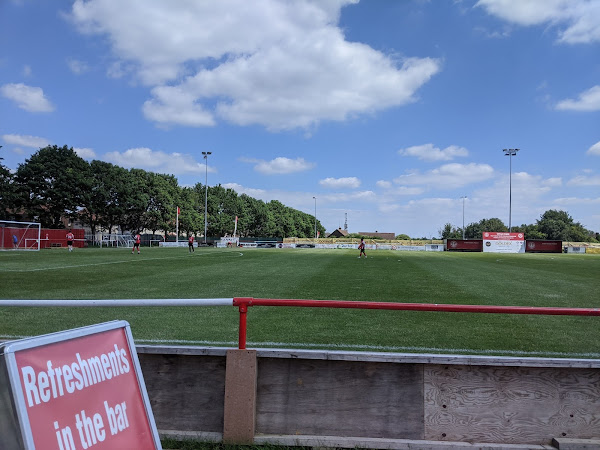 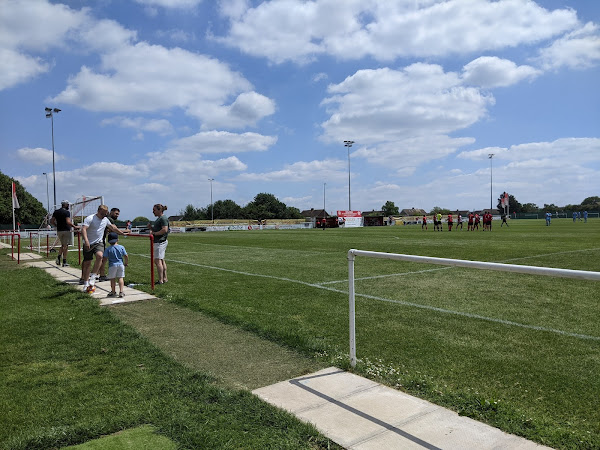 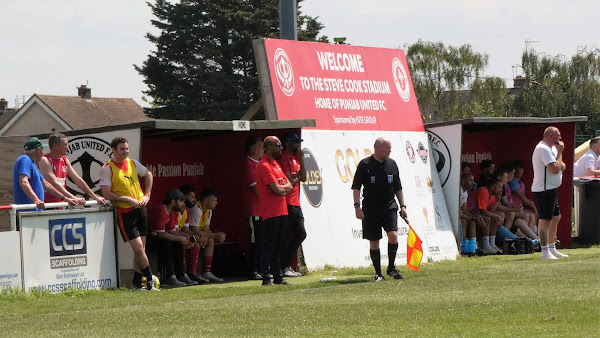 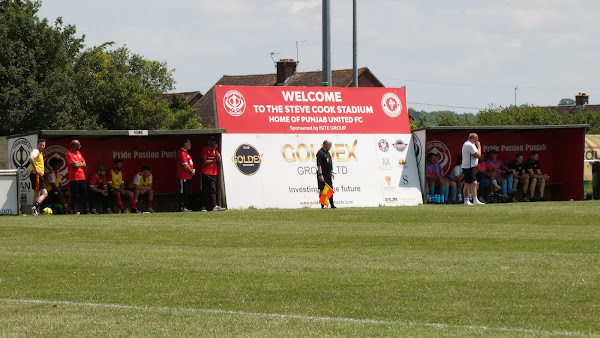 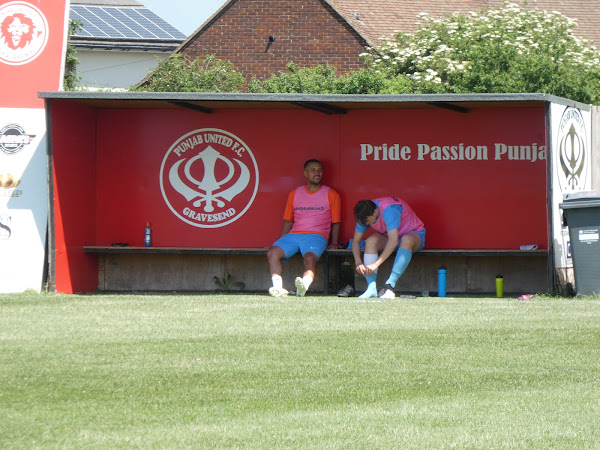 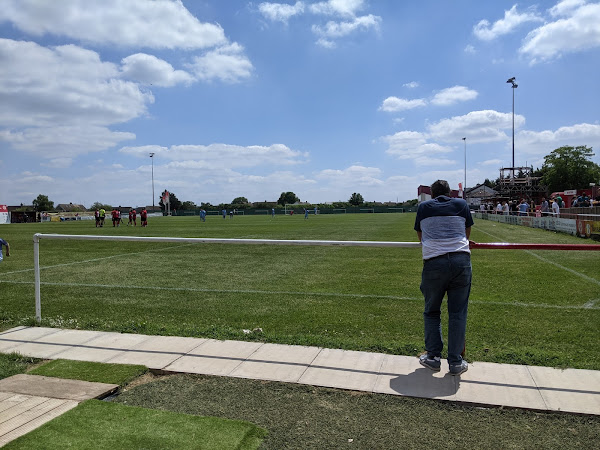