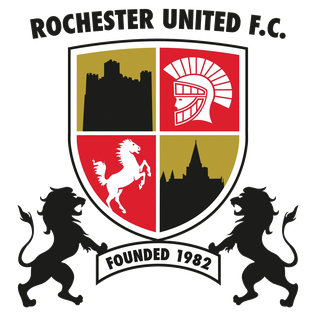 Rochester United FC
Rochester United Sports Ground
Rede Court Road
Strood
Rochester
Kent
ME2 3TU
07775 735543
Official Website
SCEFL Page
Twitter
Facebook
Instagram
Ground Number: 962
Saturday 5th June 2021
Rochester United 0-2 Sheppey United
Medway Post Lockdown Tournament
ROCHESTER UNITED FC - A BRIEF HISTORY
The club was established in 1982 by Bernard Hurst who remains the owner to this day. They played in the Medway Sunday League at first and although they were known as Templars at first, they soon changed their name to Bly Spartans. They'd stay in Sunday football for 16 years, notably reaching the last 32 of the FA Sunday Cup in 1993. In 1998, they moved to Saturday football, joining the Rochester & District League. Starting in Division 1, they won the title at the first attempt to win promotion to the Premier Division. In 2000, they applied to join the Kent County League and were accepted into Division 3 West. Two runners-up spots saw them claim two quick promotions to Division 1 West. They were runners-up two times in four seasons here, but this was not good enough for promotion. It took a move to Division 1 East in 2007/08 for Bly Spartans to win the title which they did by winning 16 out of 18 games. Three mediocre seasons were spent in the Premier Division before the club was accepted into the step 6 Kent Invicta League, which was later absorbed into the current SCEFL D1. They steeled into their new surroundings quickly, winning the title at the title at the first attempt. The club changed its name to Bly Spartans in 2012 and joined the Kent League Premier Division. This changed its name to the Southern Counties East League in 2013 and Rochester remained in its Premier Division until 2018, never finishing above 13th which they achieved in their debut season. Their first season back at step 6 saw them really struggle and finish second bottom. However, they have recovered in the past couple of years, sitting 5th & 3rd in the last two seasons that were abandoned. Rochester United made their FA Cup bow in 2015 and to date, that was their most successful season in the competition. That season, they beat Banstead Athletic and Chipstead, prior to a 3-1 defeat to Herne Bay in the 1st Qualifying Round. The season before saw their debut in the FA Vase and again it was their best season. They on 6-2 at Bexhill United before losing 3-1 at Tunbridge Wells in the 1st Round. Local cup wins include the Les Leckie Cup and Floodlit Cup in 2008, the Inter-Regional Challenge Cup in 2007 and the Kent Invicta Charity Shield in 2012. The club is located slightly closer to Strood (1.6 miles) than Rochester (2 miles). Strood has a population of just over 33,000 and is the smaller of the two towns although it does boast a retail park as well as the usual High Street. Rochester is a far larger town and has a population of around 63,000. It is a historic city and was much beloved by Charles Dickens. Model and actress Kelly Brook also went to school in the town. 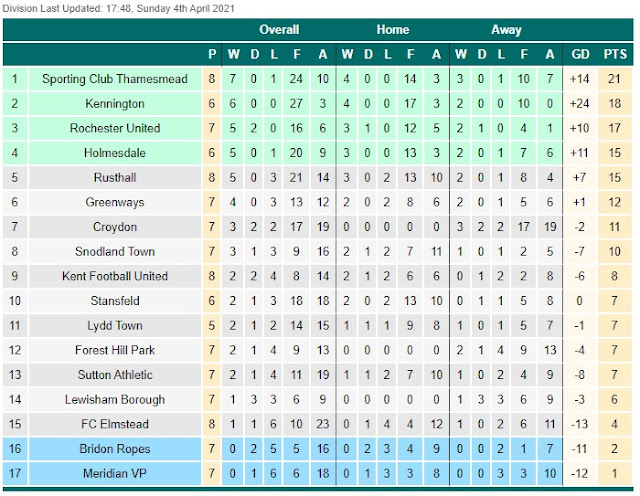 MY VISIT
I'd planned this visit around a month ago as Rochester was a place that I wanted to visit for a while. I'd recently acquired a Railcard and this made travel prices a lot more reasonable. I already knew from previous research that there was plenty of decent pubs in the area, so a train journey was essential. Looking closer on Wednesday, I saw that a ticket to Strood, which was nearer the ground cost £19.80, but there were 'only' two pubs with real cider on. A trip to Rochester cost £20.45 and was half a mile extra from the ground. However, this had five candidates and a far greater selection of food places too. I could have gone to a game on Friday night, but I felt that Fakenham Town and Dodsworth Miners Welfare were just that bit too far away. Instead, I was at home planning my day out. Two places were scrubbed off my plans - the 12 Degrees pub was not opening until all restrictions were lifted and the Golden Lion Hotel was a Wetherspoons that didn't appear to be as decent as the one that I went to in Chatham a fortnight ago. Annoyingly, all my intended pubs were in the opposite direction to the ground and in total, added a couple of miles to my walk. Information was scant on the other pubs as well, but there was a pair that were close together - the Flippin Frog and the Dead Pigeon which appeared to be owned by the same people. The other one - the Man Of Kent - promised 10 Kentish Ciders but was out of the way and several reviews online mentioned a harridan of a landlady. However, I was willing to give them a chance, but it was unclear whether they were open for drinking in, so I popped them an email. There was the possibility of having the best of both worlds and visiting Strood post-game, as it wasn't far off the route. The two stations were less than a mile apart, however, the 65p extra meant that I'd be able to get a high-speed train to Rochester as opposed to a slow one to Strood. The evening was a quiet one, a few drinks to help me relax but a fairly sensible one with me setting my alarm for 7.30. 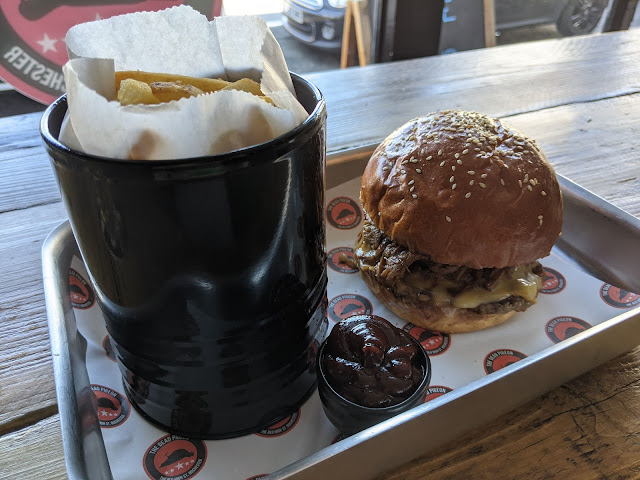 In the end, my early night meant that I woke up at 6. After reading and watching TV in bed, I got up, had a wash and got dressed before having breakfast and leaving shortly after 8. It was a pleasant walk to town and I got to the station at 9.15. Five minutes later, I'd bought my ticket and was on the platform. The train left at 9.33 and it was standing room only due to a previous one being cancelled. I had an email from the pub that I'd enquired about and it was another one struck off my pre-match list as it didn't open until 5. It was a couple of underground trains to St Pancras and I was there well in advance for my 10.55 train which got to Rochester as promised at 11.32. It was a 20-minute walk to the Dead Pigeon where I indulged. From the Kent Cider Company, I had pints of Waken and Discovery as well as a Plum Porter Pulled Pork Burger with Jerk Fries. All very pricey, but as it wasn't going on my football costs, I wasn't bothered. Better to have something nice, rather than pay half the money for standard fare - mediocre stuff would be added to my footy costs rather than my other hobby of trying new things. I walked to my intended Micropub but it was takeout only so I went back to the Dead Pigeon for two-thirds of Fraise Your Hands Up from a brewery in Chatham. It was nearly £6 but enjoyable. From there, I set off to meet Anwar and Hicham and we walked to the ground, getting there at £2.50. It was the usual £5 entry which was great value. 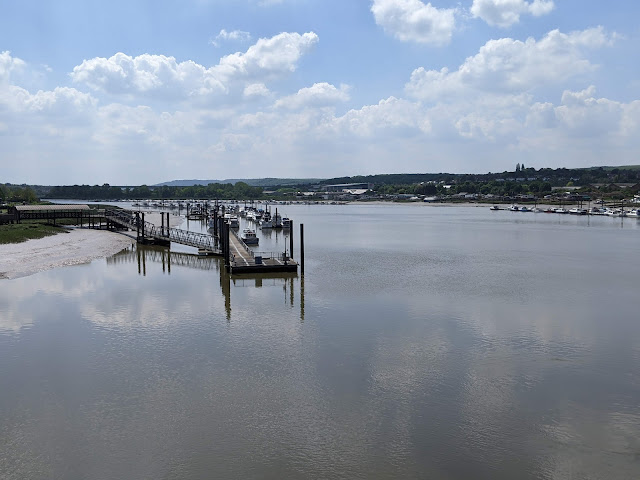 This game saw the bottom of the group team face the top one. Rochester had lost all four of their games so far. Defeats to Chatham Town (5-1 & 3-0) and Lordswood (1-0) as well as a 5-0 defeat in the reverse fixture had meant that they were up against it as the sole representative from step 6. I'd seen Sheppey United win 4-2 at Lordswood a fortnight previously and they'd also beaten Punjab United 3-2 on the opening day.  Their latest game on the previous Saturday had seen them draw 4-4 in an exciting game at Chatham Town. Sheppey United dominated early proceedings and they took the lead on 20 minutes with a neat low finish. Rochester improved and had some chances but Sheppey made it 2-0 with a long range effort on 63 minutes. Rochester had the chance to reduce the arrears with ten minutes to go following a trip in the box. But the visiting keeper pulled off a brilliant save to tip it onto the bar. 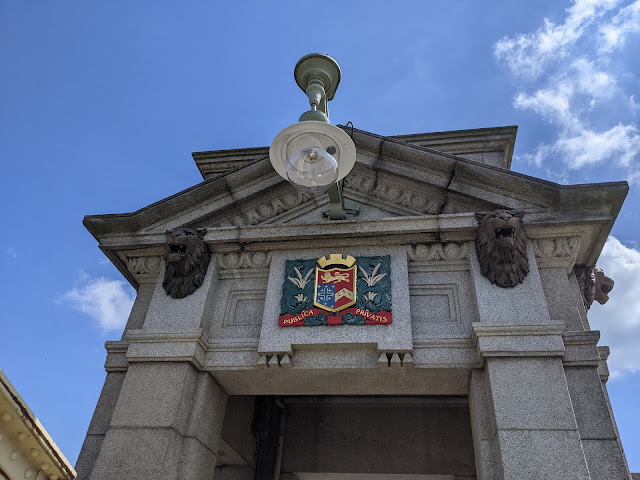 The game dragged on until 4.55 which meant we had to get a move on to the station. I'd decided to go with Anwar & Hicham on the earlier train as opposed to going back to the pub. We were on the platform with five minutes to spare, having opted to go back from Strood. The mandatory face mask-wearing was in operation, a sensible option, but not the most pleasant in the warm weather. At least the walk back to the station had been easier, being downhill most of the way. I started to upload my blog and pictures on the way home and the intention was to get the train home and stop in Wycombe for a couple of pints before going home. There was a spanner in the works though. When we got back to Marylebone, I saw a train for Birmingham on the platform about to depart. Assuming it was stopping at Wycombe, I jumped on, only to realise that the first stop was Haddenham & Thame Parkway. Luckily, it was recoverable that early in the evening and I jsut got off and hopped across the platform for a train to High Wycombe. 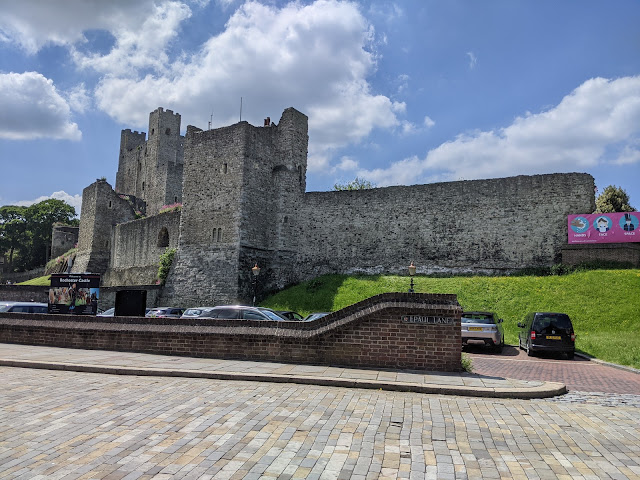 THE GROUND
REDE COURT ROAD or the ROCHESTER UNITED SPORTS GROUND is a decent venue for the level. Unlike the modern trend, the stand is a proper one rather than a metal one off the back of a lorry. It holds around 200 and there is a small area of standing cover for around 50 next door to it. Three sides are available to spectators, with the fourth being closed off. There was a decent looking tea bar plus a small bar but I didn't try either. Nearby is a Co-Op and a pub, whilst Strood is 30 minutes away, with Rochester ten minutes further. 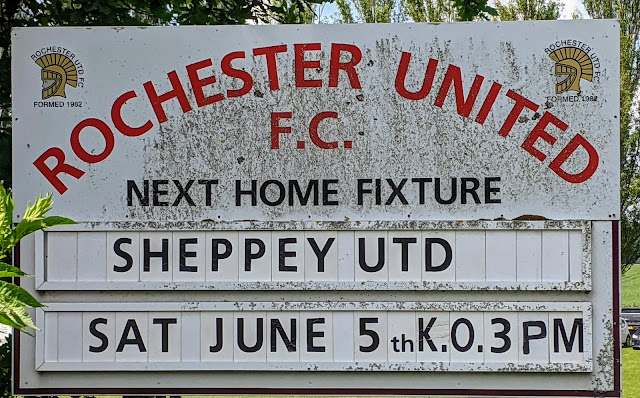 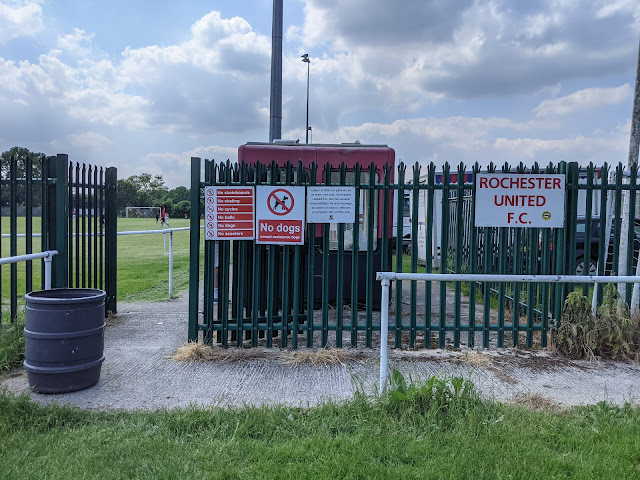 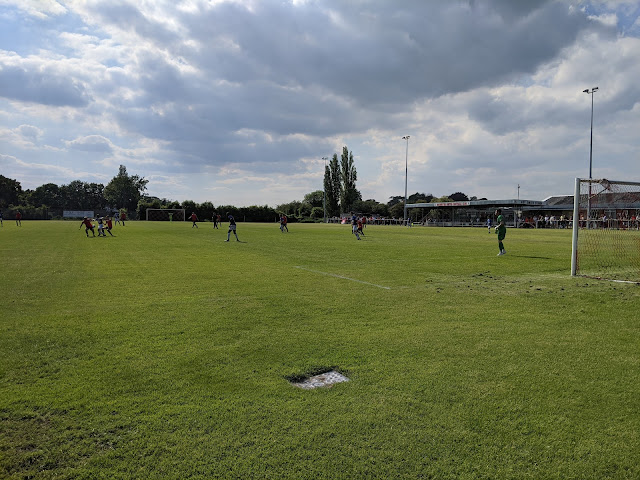 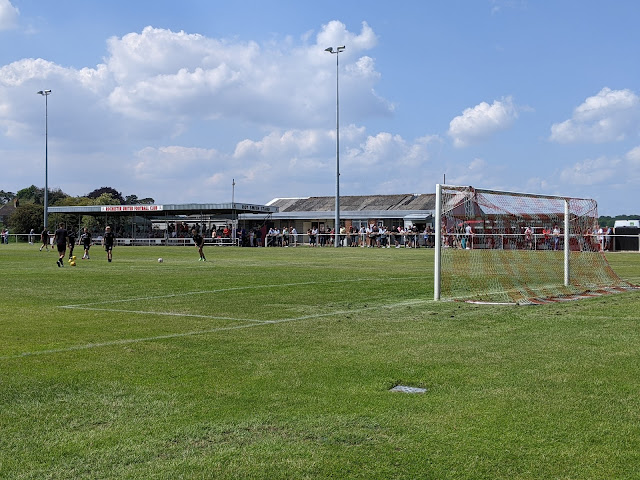 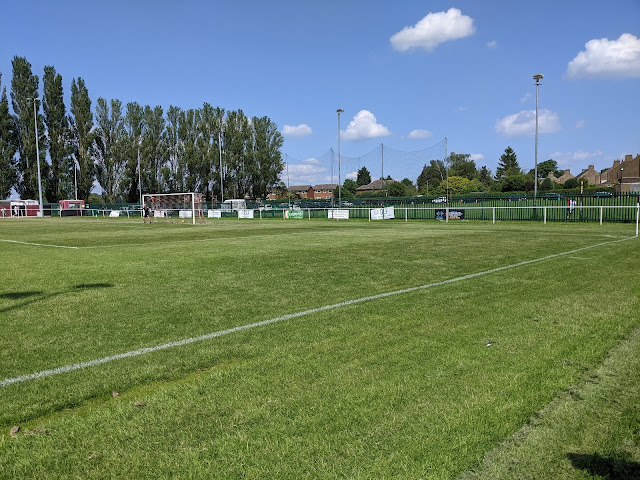 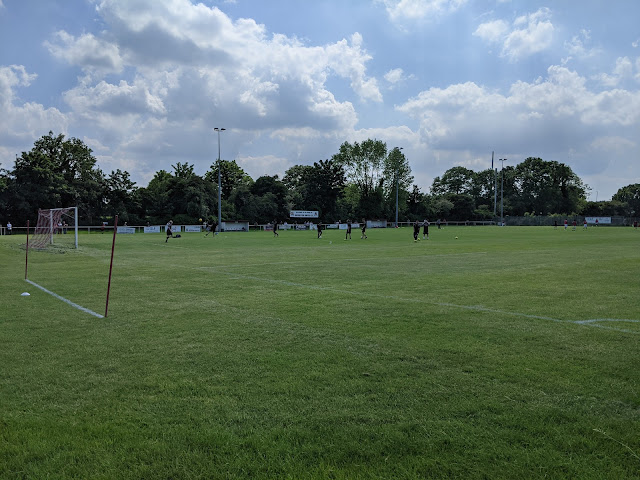 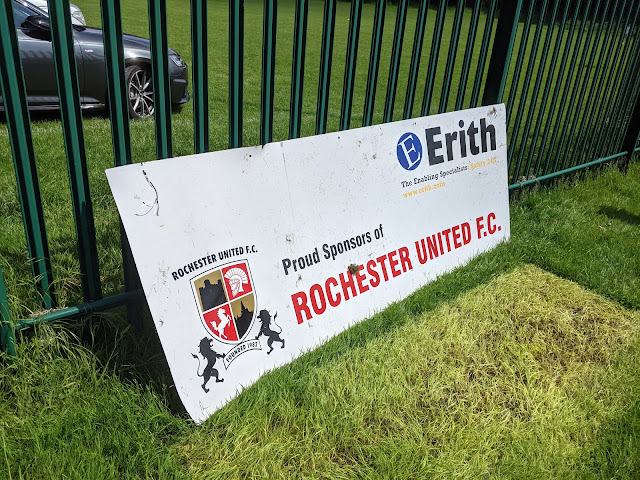 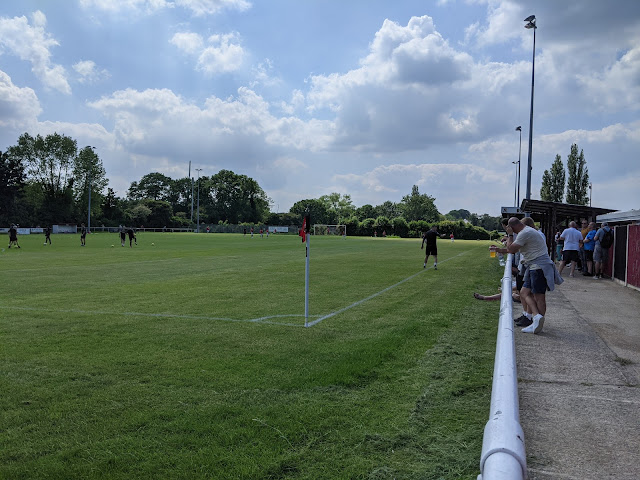