Ground Number: 961
Tuesday 1st June 2021
Kulture Klub 3-3 Allenburys Sports (6-5 pens)
Hertford League Centenary Cup
A HISTORY OF THE HENRY BARRASS STADIUM
The stadium was built in the 1920s, though I've been unable to find out who Henry Barrass was. It hosted a number of events, including a friendly with Tottenham Hotspur, the Charter Celebrations in 1958 and a horse show in 1959. Football-wise, Edmonton Borough played here from after the Second World War in the London League. They merged with Tuffnell Park to become Tuffnell Park Edmonton in 1950, having two unsuccessful seasons in the Isthmian League before playing in the Spartan, Delphenian and Athenian Leagues. They enjoyed some degree of success in all three and notably reached the FA Cup 3rd Qualifying Round in both 1968 and 1969. This was following a name change to Edmonton in 1960, they remained here until 1973 when they were renamed Edmonton & Haringey. They then moved to Coles Park and became what is the modern-day Haringey Borough FC. The ground once boasted extensive terracing and a six-lane cinder track but fell into disrepair after they left. The stand remained however and the pitch is still used in the Edmonton Sunday League.

The Henry Barrass Stadium in the early 1970s. Opened in 1925 and boasting a long cover and seated stand, it once hosted Isthmian League football. Edmonton FC moved out in 1972 and it has not been used for senior football since, but amazingly the huge old cover is still there. pic.twitter.com/wm1w1eVPoS

Edmonton is situated in north London and has a population of around 82,500. It is located near Tottenham and once was a predominantly white area but is now one of the most multicultural and vibrant areas in the UK. Notably, the most spoken foreign language spoken in the area is Turkish, whilst there are also large black African and Caribbean groups in the area. It is served by Edmonton Green overground station and a number of bus routes. There are plenty of businesses and landmarks in the area and it is home to the biggest incinerator in the UK. There are plenty of green areas also, one of the largest, Jubilee Park opened in 1939 to commemorate King George V's silver jubilee four years earlier. This is where the stadium is located. Chas and Dave once recorded a song about the area and an episode of 'Some Mothers Do Ave Em' had the hapless Frank Spencer out of control on roller skates on various locations in the town. Famous people to come from the area include footballer John Beck, entertainer Bruce Forsyth, actors Larry Lamb & David Jason and Chas Hodges from Chas N Dave.
Kulture Klub FC was founded in 2015 and has a number of teams, also playing Sunday Football (in the Essex Corinthian League) as well as women's and youth football. Their Saturday team play in the Hertford & District League. They appear to have only joined this season and are going fairly well. They sat in 3rd prior to this game and appear to have one league game left, due to other sides pulling out of the competition. The team appears to have its roots in the Jamaican community.

MY VISIT
I'd only seen this game on various Groundhopping Whatsapp groups that I am on yesterday, but I was keen to do it. It was being played at the Henry Barrass Stadium in Edmonton which despite being in a public park, had a sizeable stand. I'd have to do my research the following day, but the game was between Kulture Klub and Allenburys in a competition listed as the Centenary Trophy. Normally, a game in London would see me use the train especially seeing as the parking was not the best. However, I negated the problem by planning to park on the other side of the park, where there were fewer houses. In any case, the train journey was not the best, taking over two hours. Plus, the pubs were not the greatest, at least in terms of what I like. Fellow hopper Anwar was also not keen on the train for the same reason, so I agreed to drive. I planned everything after coming back from Mortimer the previous weekend, at least in terms of parking and dinner. Because of this, I planned to leave fairly early, meeting Anwar at 4.30 as it's not the best town for roads. 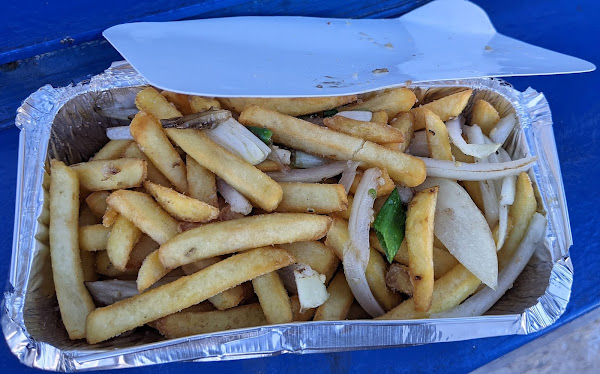 I had a great night's sleep the day before the game, getting in over 8 hours. It was my best in ages and I woke up feeling nice and refreshed. I had some breakfast and watched some YouTube videos before having a bath and getting dressed. It was blazing hot for once and the first day of the year that I've got to wear shorts. I decided to walk down Wycombe and back, covering around 9 miles in total. I got a few bits including a nice pepper steak which I did with some chips once I got home. I then spent the afternoon trying to start my blog and find some more out about the stadium and club. I just completed it in time to leave at 4, though as with information about clubs at this level, it was tricky to come by. I got to Anwar at 4.30 as arranged but the journey was a bit of a mixed bag. We had to take some back routes to avoid the traffic but got there just before 6.10. My hunch about parking on the other side of the park was a good one, with me finding a parking space straight away. I headed through the park where there were few signs of a football game. I headed to the China Rose Chinese takeaway where I had salt and chilli chips and Thai fishcakes. They weren't the greatest value for money in terms of portion but they were delicious. I didn't put them to my football costs, rather put them down to trying new foods. I headed back to the ground and met various hoppers including my pal Dan from Braintree. Laurence and Pete were there from our groundhopping WhatsApp group were also there. 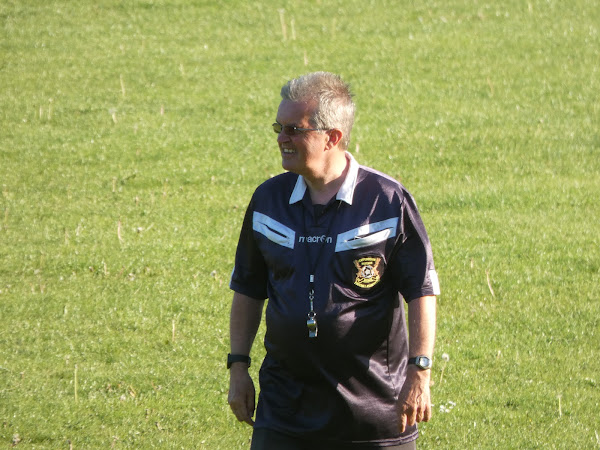 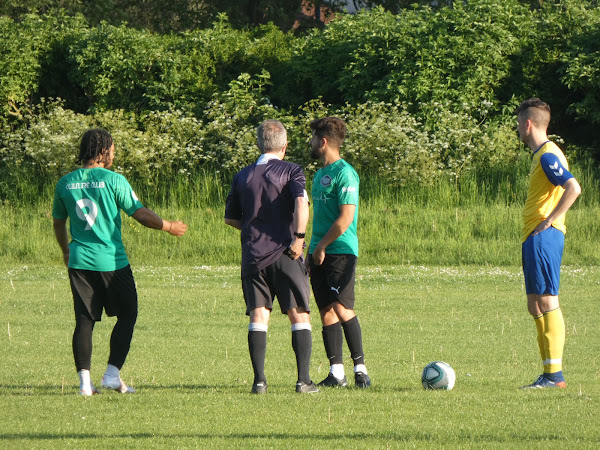 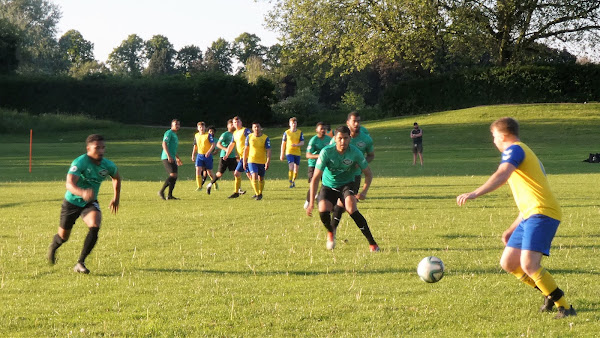 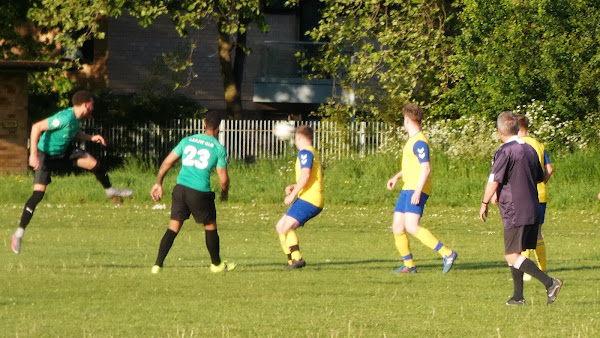 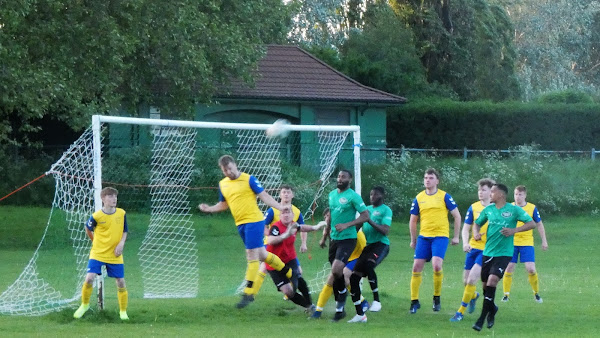 Kulture Klub has been in great form recently, though they'd been awarded due to the opponents having opted not to play the game. When they had played, they'd won all four of their games since lockdown was lifted. Stotfold Junior Town were beaten 3-0 on 4th April before they won 5-1 at today's opponents Allenbury's Sports a week later. They had to wait a fortnight to play their next game but won an exciting game 4-3 at Mill Lane FC. It was over a month until their lastest game as they won 7-2 at home to Westmill on Saturday. Allenbury's Sports other games have seen them in disappointing form with them losing 7-1 at Bocas Jogabonito and 2-0 to Westmill. However, they had won on 8th May, beating MKS Carpentery 1-0. It was nearly 7.20 by the game started, some of the Kulture Klub players getting delayed on the way. The hosts started the better team but on 16 minutes, Allenburys Sports took the lead. A high ball was put in and #9 volleyed home from the edge of the area. The hosts continued to have chances but were wasteful with their finishing. The lead was doubled on 35 minutes, the Kulture Klub keeper was caught out of position and there were also strong claims for offside. Less than a few minutes later, the hosts did have one back, a low drilled shot from outside the area. The game continued in the same vein, but it wasn't until 83 minutes that Kulture Klub would find their equaliser. The visiting keeper made a great save but from the rebound, a defender palmed the ball away with his hand. He really should have been sent off, but the referee decided against it. The penalty was converted to make it 2-2. Two minutes later, Kulture Klub were awarded a free-kick. It was from some way out, but it went in, taking a deflection off the wall on the way in to make it 3-2. With Allenburys holding on for some while, the game looked as good as over. However, they were awarded a free kick in the last minute. Their keeper took it, forced a corner and from the resulting kick, the ball was headed home at the back post. The light was fading by now, but the referee was intent on playing extra time, albeit reducing the halves to ten minutes. The two sides could not be separated, so it was down to penalties in very poor light. The referee didn't help by hanging about, but Kulture Klub went on to win 6-5 on penalties, a deserved result and some excellent entertainment for the 35 in attendance. It was a game that deserved a far larger crowd, but fixture news is tricky to come by at this level.

The match was a strange one and the referee was a real character. As well as the game kicking off late, the lines weren't even painted, just carved out in the pitch so they were really tricky to spot. The man in the middle compounded matters by wearing sunglasses throughout and barely leaving the centre circle. Choosing to view the match from afar must have meant that he was guessing for some of the decisions and the biased club linesmen couldn't have helped. He twisted the rules to his own ends, playing 10 minutes each way rather than 15 as it was getting dark. He also had a go at Dan and Anwar for shining their torches in a futile attempt to light up the pitch. However, you can't fault him, as it's a tough job, even though in my opinion, they should have gone straight to spot-kicks. Maybe Kulture Klub didn't fancy it, having dominated throughout and with the Allenburys keeper putting in a man of the match performance, they must have been concerned. It was almost pitch black by the time we left at 9.40 and some hoppers had left at the end of normal time to catch their train. I said my goodbyes to Dan, Laurence and Pete amongst others and went back to my car. The journey back to Aylesbury took an hour with Greatest Hits Radio providing an excellent soundtrack and presenter on both legs of the journey. After dropping off Anwar at 10.40, I got home myself at 11.05. I was in bed by 11.30 but couldn't get to sleep, As ever, after a really good nights sleep, I find it hard to drop off the following night. In the end, I only got a few hours of sleep but felt OK when I awoke at 7 the following morning. 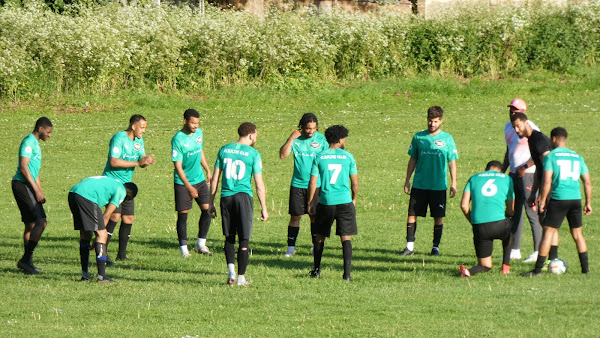 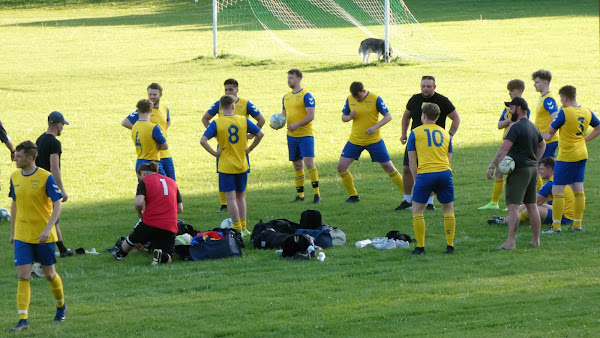 THE GROUND
The Henry Barrass Stadium is an excellent venue for a park and the huge stand, although in disrepair, could probably hold around 600. There is no rail around the pitch, but you could probably have a four-figure crowd at a push. There is a basic tea bar behind one goal, though there are plenty of takeaways on the main road, enough to suit all tastes. It is around 25 minutes walk from Edmonton Green Station, but buses serve it also. Parking is limited to street parking, which might be an issue with a large crowd. The small car park appeared to be reserved for players, but overall, it is well worth a visit. 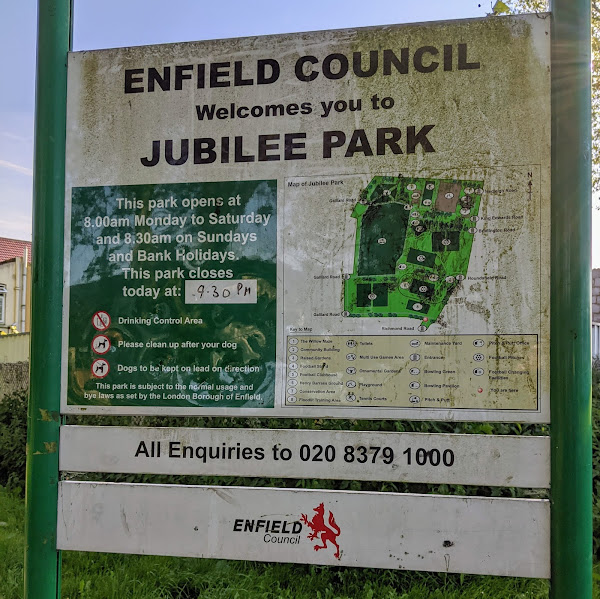 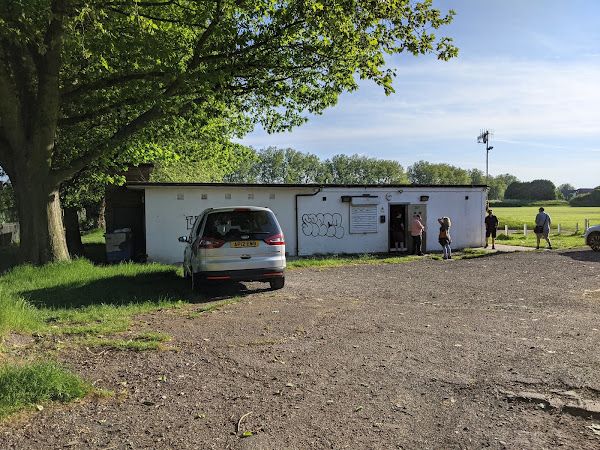 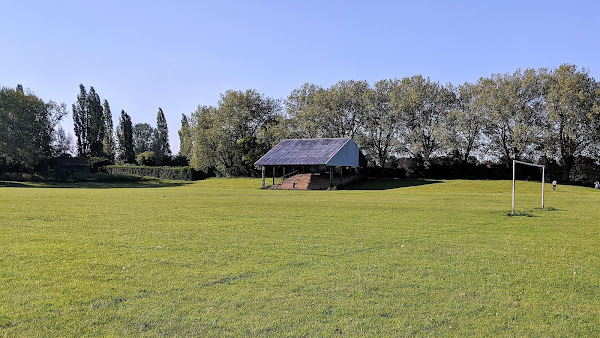 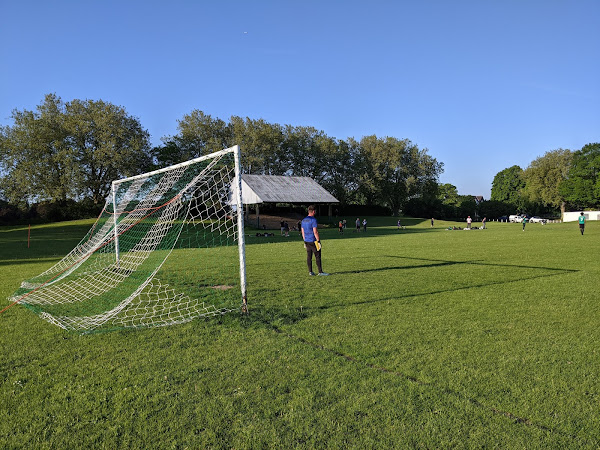 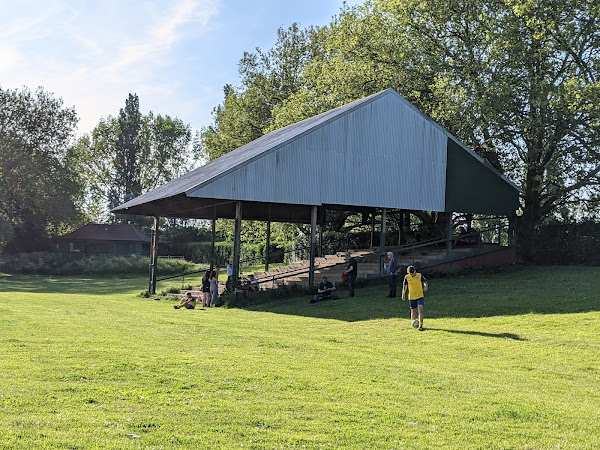 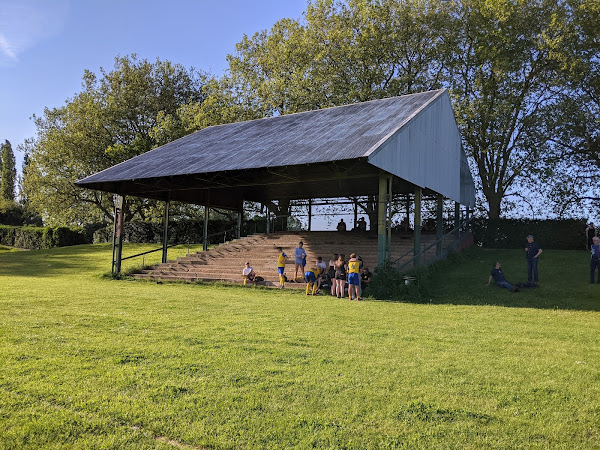 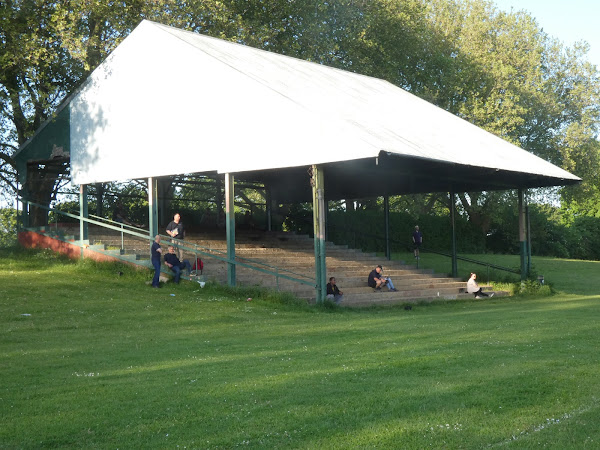 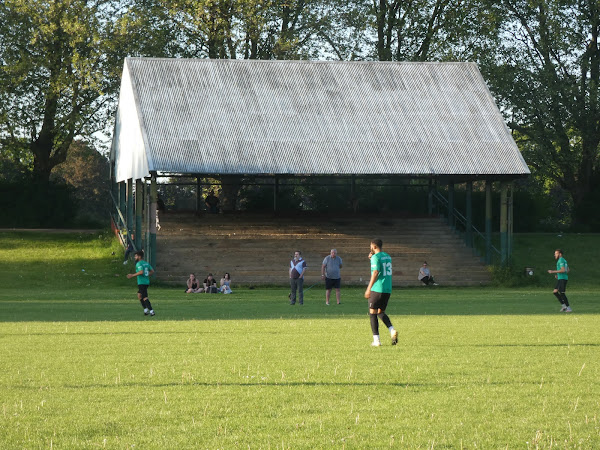 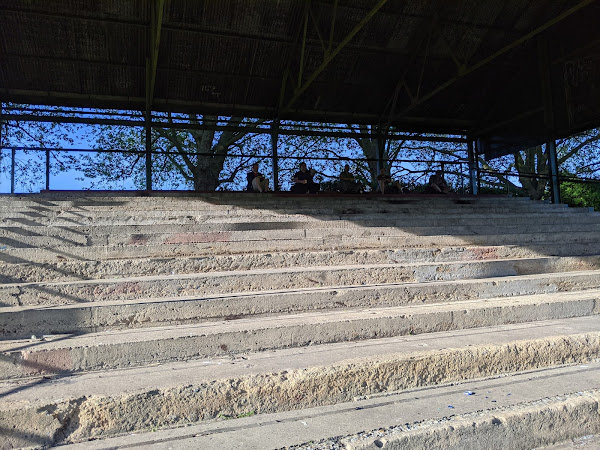 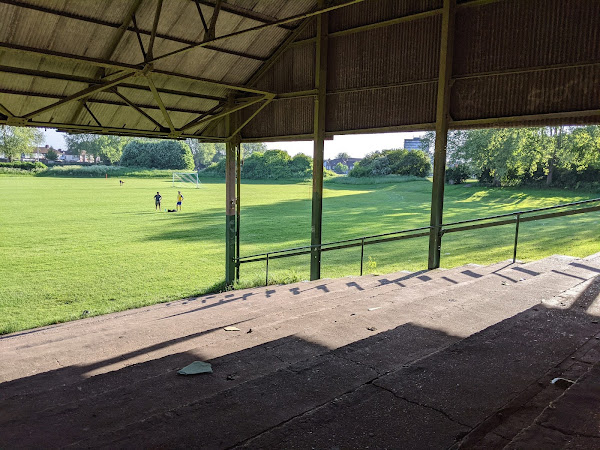 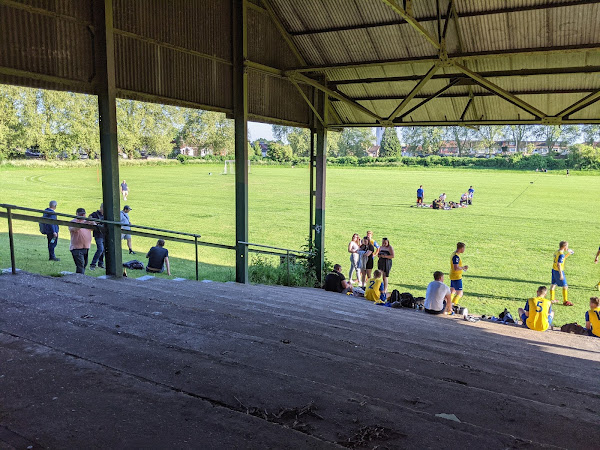 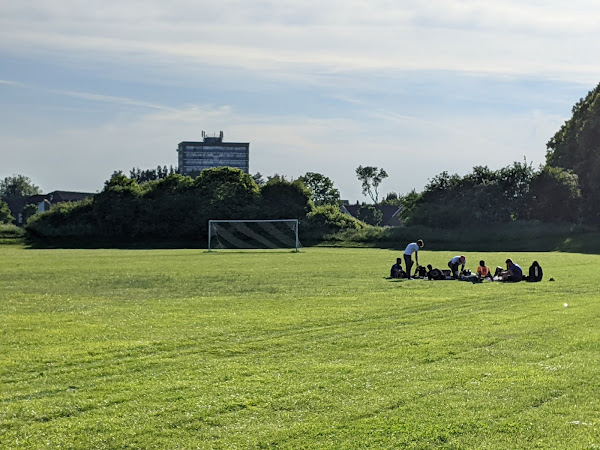 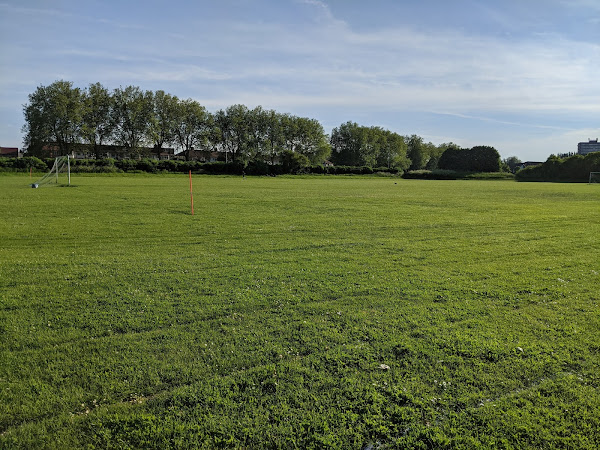 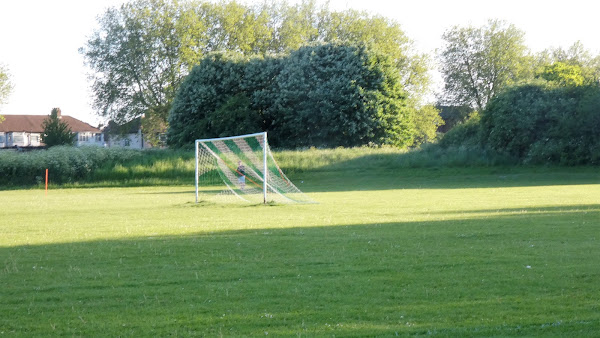