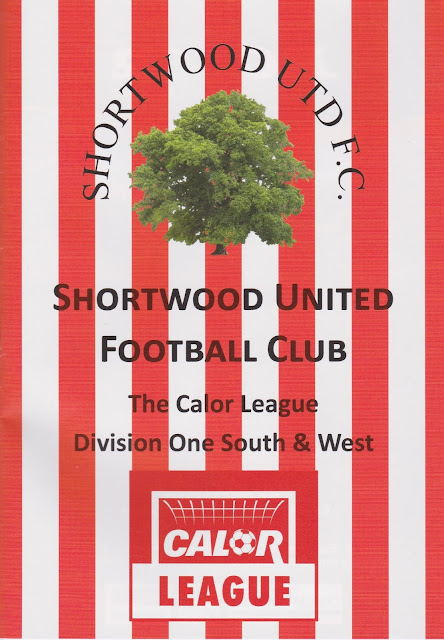 Shortwood United FC was formed in 1900 and until 1982 played in local Gloucestershire leagues. But that year they won the league and were promoted to the Hellenic Premier. Although they were relegated in their first season, they bounced straight back and went on to win the Premier Division at the first attempt. They won it again in 1992 and after a number of 2nd placed finishes, were finally accepted into the Southern League in 2012. Joining the Division 1 South & West, they had a solid first season finishing 8th. Their best run in the FA Vase came in their last season participating in the competition. In 2012 they got to the quarter-final before bowing out to Herne Bay.  The following season they got to the 3rd qualifying round of the FA Trophy before going out to fellow Southern League D1 S&W side Merthyr Town. This season they had hit the headlines in the FA Cup, getting all the way to the 1st Round before losing to Port Vale, live on BT Sport in front of a record crowd of 1247. This was by far their best run in the FA Cup, they even beat Aldershot Town who months previously had been a football league side. They were also doing excellently in the league, sitting 5th before kick off and well in with a chance of competing in the playoffs.

Up until Saturday afternoon, I had been planning on going to Gosport Borough v Hayes and Yeading. But then the Hayes fan who I was going with was unsure if he could make it. So I had to make alternative plans. Regular groundhopping partner Anwar had been keen to go to Forest Green for a while, and although I had already been there on 2 occasions, I was happy to drop him there and then go to Shortwood United, which was a couple of miles away. It would also give me the opportunity to say hello to a Forest Green Rovers fan that I know, Ben, and also to pop into the club shop and get something to add to my collection.
The trip had been planned during Wycombe's 2-0 win over Dagenham and Redbridge, the Saturday previous. The build-up to the game had been dominated by our underperforming Scottish striker Steven Craig moaning to the local paper that his bonus had not been paid. The general consensus was that he deserved naff all bonus given his efforts on the pitch this season and he took a bit of stick for it. The script was written for him to do something and so it proved to be true, After being involved an incident that saw Dagenham's Scott Doe sent off, he scored a penalty in the second half and gave a generally solid performance, amongst his best in a Wycombe shirt. The whole team performance was excellent and we were good value for the win. The only bad spot was overzealous stewards kicking out 3 fans in front of us for doing nothing wrong, including one guy on crutches who was taken out of the ground. Although one of them has a bit of a reputation there was no bad language which is the cardinal sin in the family stand so it will be interesting to see how it transpires, as from what I understand they are free to return next week without sanction. It turned out after speaking to them that they were 'done' for standing which is complete nonsense as they weren't on their feet that long and sat when requested. 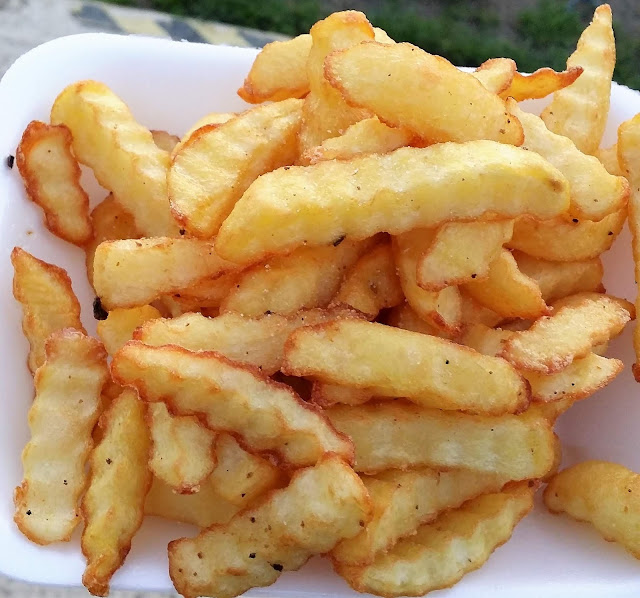 I had the day off again, so I just chilled at home and done some research into future blogs before leaving for Aylesbury just after 2.30. I wanted to get some new jeans but in the end, didn't have time and just went to B&M Bargains to get some stuff for the game. I picked Anwar up at 4 we made our way cross country to Gloucestershire. There was the usual poorly built road around Witney where the traffic is bad whatever time of day you go and so it was about 6pm that we got to Brimscombe & Thrupp to take pictures of the ground. It was a nice place with a steep slope around the pitch and so you could get a nice elevated view of the action. We then stopped for a pizza just outside Nailsworth and got a right bargain with 2 for £6.50. My Mexican one was delicious and I was left wishing I'd got the bigger size. It was then 2 miles to Forest Green Rovers ground where I had to drop Anwar. I also met up with my mate Ben who supports Forest Green and although it was the briefest of meets as I had to get to Shortwood it was still nice for a quick chat and handshake. Hopefully, he will pass his driving test soon so we can have a proper meet somewhere as public transport is pretty woeful, especially in smaller places. I then made my way to Shortwood, arriving at 7.15. I paid to get in and got a programme. I then sought out the bar and to my delight, they did a cider I had not had before in West Country Gold, so I was well pleased. Later I was still peckish so I got some chips and a Bovril. I was hoping Shortwood would win seeing as they had been a decent club. 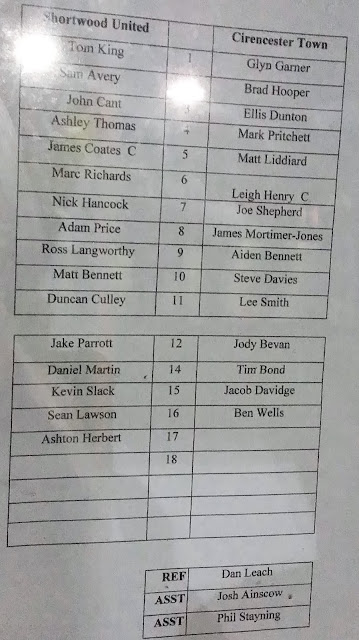 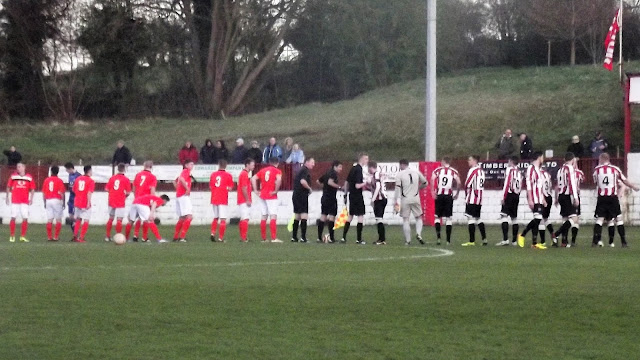 It didn't turn out to be the case, however. Cirencester started with a bang and in no time at all were 2-0 up. First off Lee Smith took advantage of slack defending to score from close range and then shortly after a corner was not cleared properly and the visitors took full advantage through Joe Shepherd. Though Shortwood pulled a goal back with around 15 minutes to go - another short-range effort by Duncan Culley that went in off the post, they were second best throughout the game. It was nice to see a couple of dogs enjoying the football too, although the rabbits in the field behind may have provided an entertaining diversion. After the game, I made my way back to Forest Green. As their match finished late, I caught Anwar just as he was coming out of the ground, as Forest Green Rovers drew 1-1 with Kidderminster Harriers in the Conference. It was a pretty decent journey home and after dropping Anwar off in Aylesbury, I got home shortly before midnight. 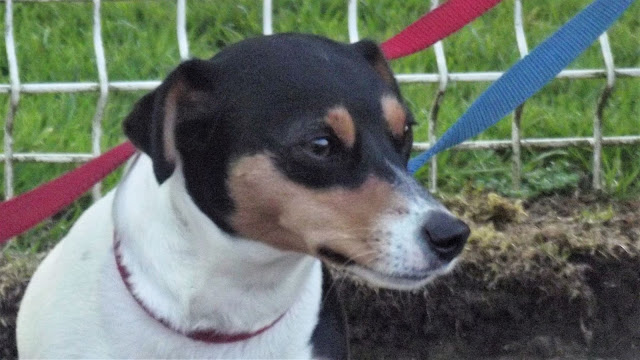 MEADOWBANK is one of the more basic grounds at this level. Originally there was only one stand - the Howard Webb stand, holding around 150 fans. But after they gained promotion a few years back they added 2 smaller stands on the other side, with the rest of the ground being open standing. Both the tea bar and clubhouse are excellent, which is a good job as the ground is a mile or so away from anywhere, and up a long narrow road. It's well worth a visit though and the club is nice and welcoming, making it a good day out. 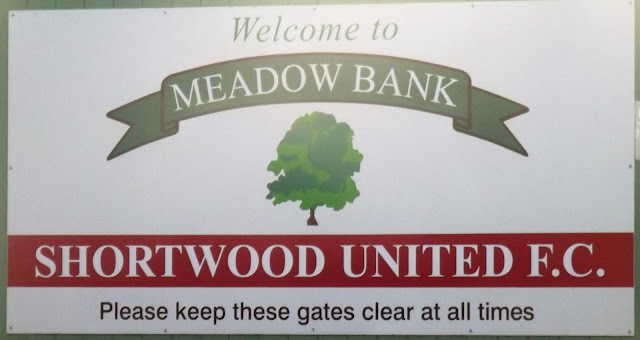 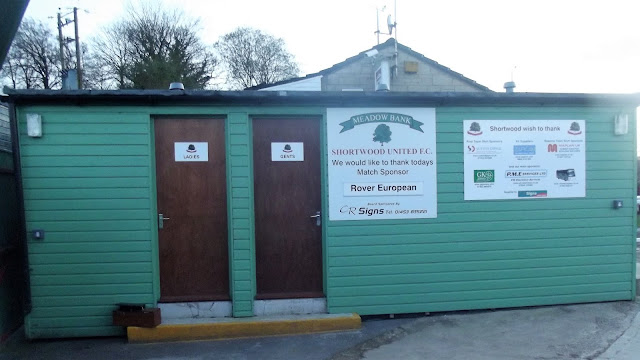 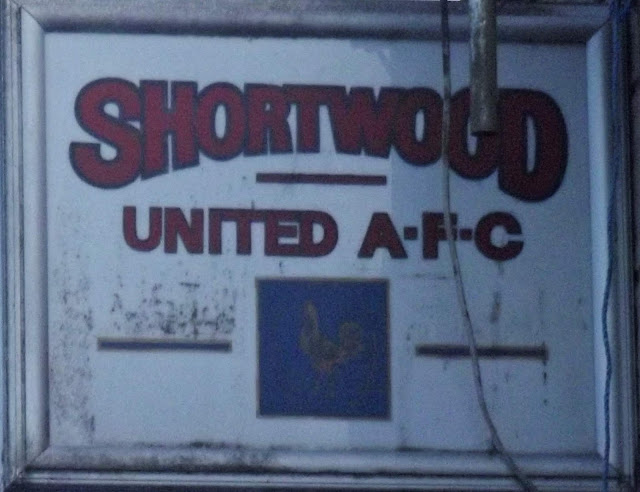 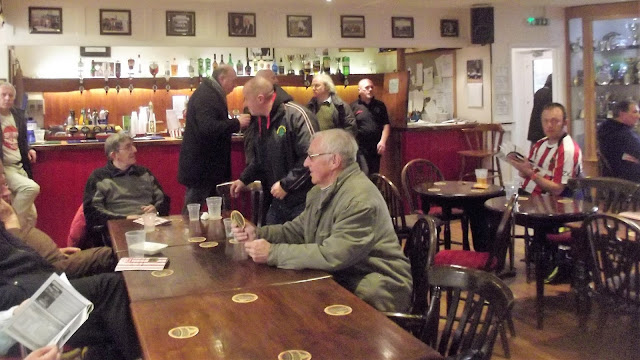 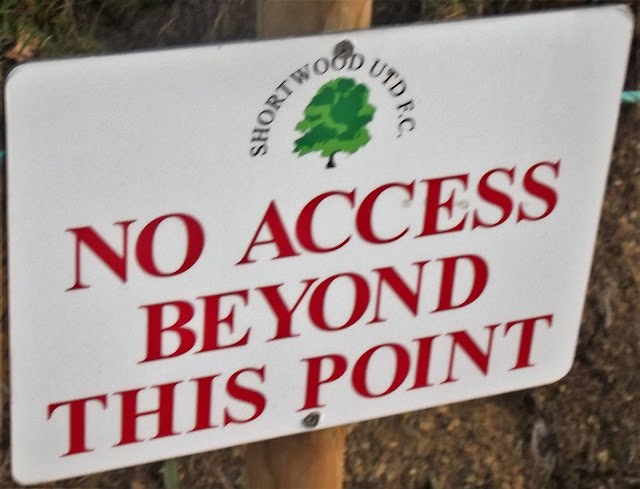 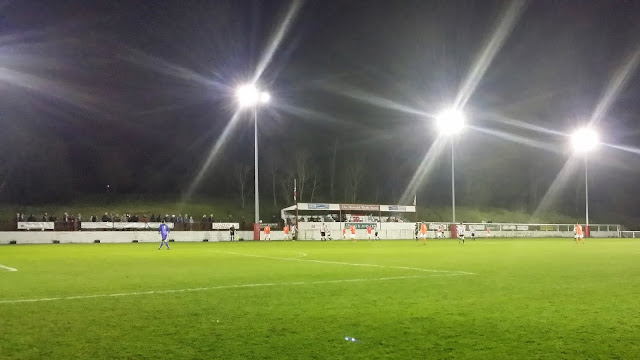 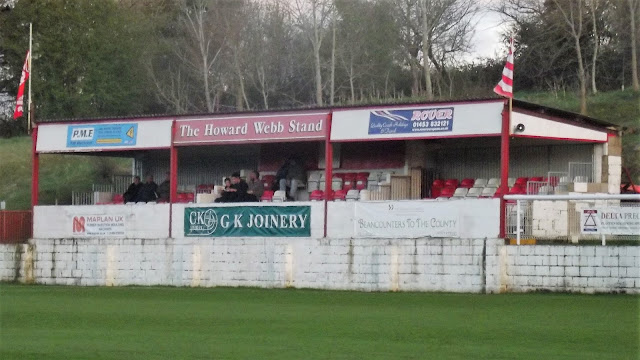 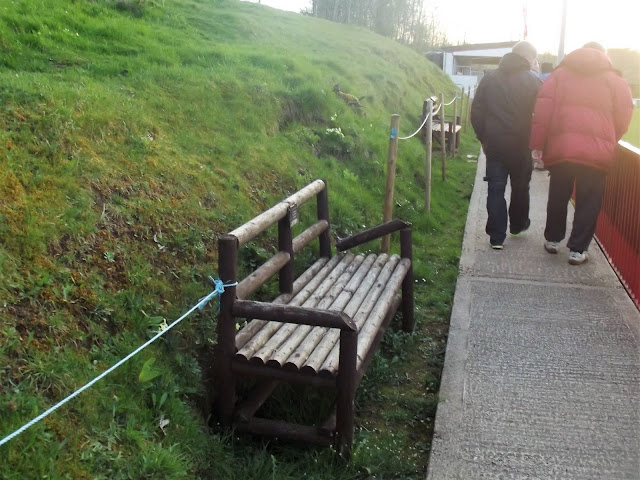 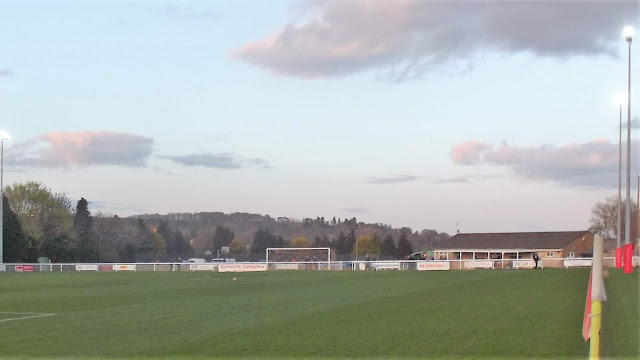 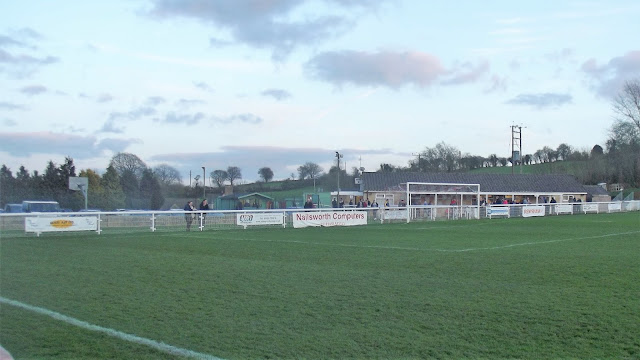 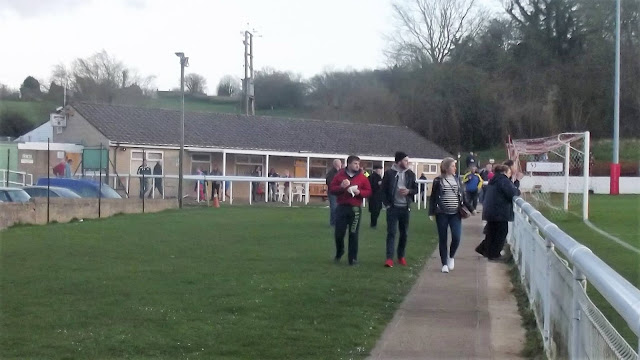 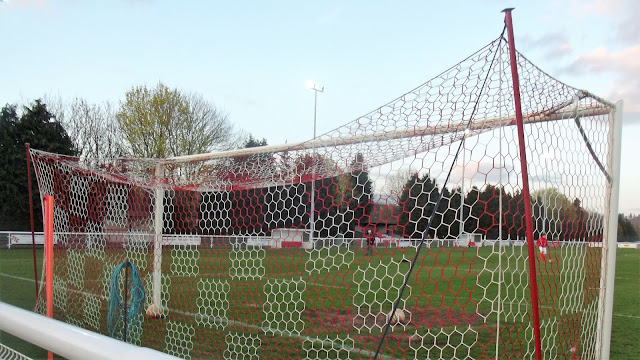 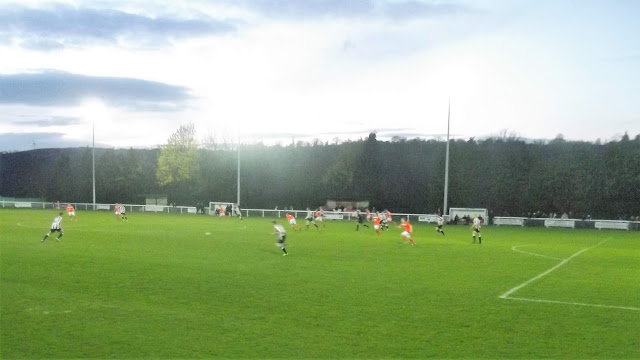 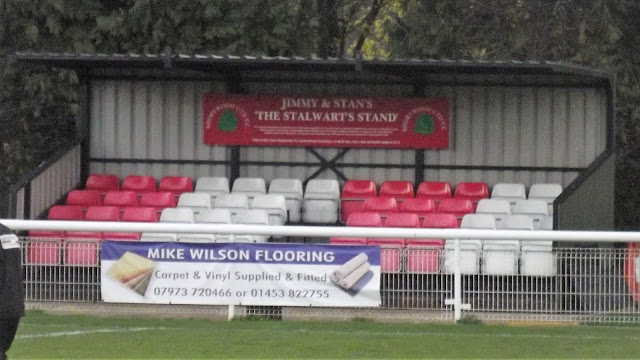 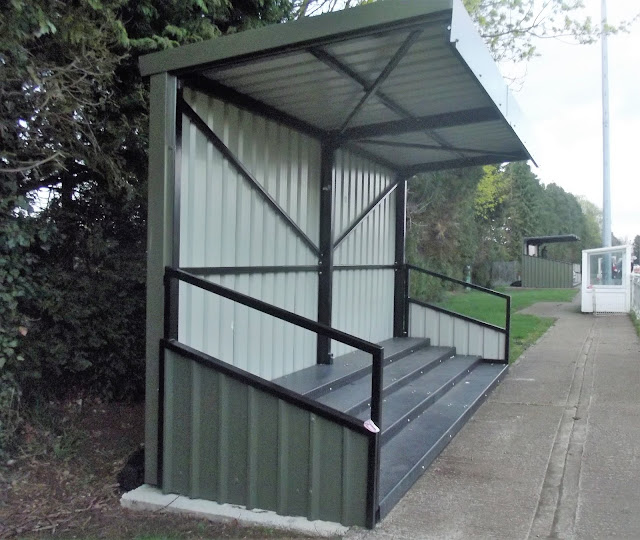 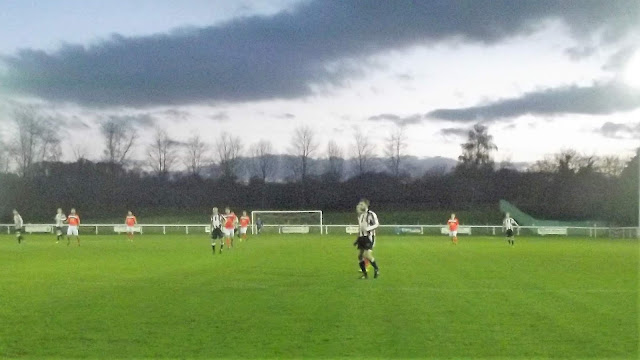