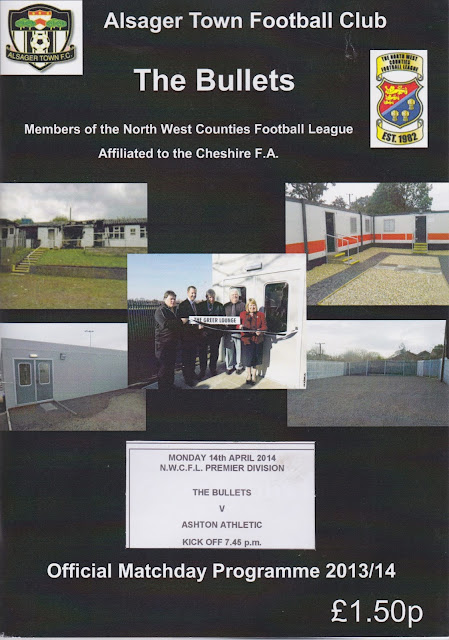 The club was founded in 1965 with the amalgamation of Alsager United and Alsager Institute.  After playing in local leagues they joined the North West Counties League Division 2 in 1999. After finishing 12th in their first season, they continued to press and won promotion to Division 1 in 2002. It was another promotion in 2006 as they won the North West Counties League Division 1 and gained promotion to the NPL. Despite 2 consecutive 14th placed finishes, they were demoted due to their ground not being up to scratch. I thought this as a bit harsh as it seemed decent when I went. Despite a 7th placed finish in the league in their first season in the newly renamed North West Counties Premier Division, they have finished in the bottom half every season since. They were struggling again this season, and needed to start winning again - and quick, if they were to avoid relegation. They hadn't had much success in the FA Cup, only winning 2 out of 14 games in their history, and they had got as far as the second round of the FA Vase on 2 occasions.

Alsager Town was a club that I had visited to take pictures at around 8 years ago and they were friendly and accommodating and pleased to see that I had come. This isn't always the case,  but places like these and Trafford make you want to visit for a game. Much the same as I did for Woodford United last season who rewarded me again with an epic 5-4 defeat which turned out to be one of their best results in a torrid season. For the second time this season, I would be enjoying a night away in a hotel, despite only having one day off work. I'd also had 2 or 3 longer stays on my weeks off from work - it's a good way to do 2 grounds without paying for petrol twice, with a hotel always being cheaper. For once the reason for the overnight stop was not solely for football. The set of Coronation Street moved in the summer, and for a limited time, fans can visit the old set which is still intact. They say it's only running until September or October time, so I had to get in quick. I had to be in Manchester by 9.30 on Tuesday morning, and so decided to stop over for the night and see a game up North. Hats off to the North West Counties League, they have filled a void when I have been up North on many occasion, and this proved to the case again. 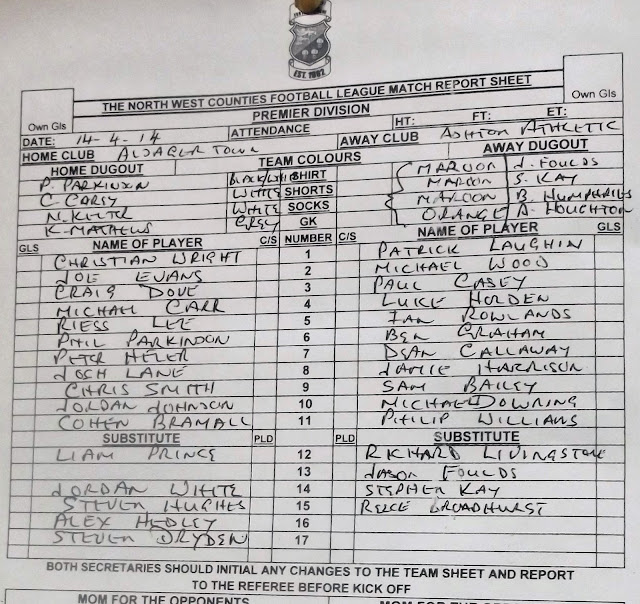 It was another easy day at work and after months of days where it never seemed to stop, it was most welcome. I finished at 10.45 and went home, having a bath and getting my old xBox ready to send. I left at 3pm and had to stop off at the shop in Booker to drop off my parcel. It was a mixed bag of a journey up. On the one hand, there was 25 minutes delay, though on the other I have had worse and it was the rush hour. I was still feeling annoyed though and fancied a drink to chill me out. Originally I had planned to park at the ground and walk into town, but due to me arriving at 6.20, I decided that I would park up in town as I was only having 1 pint. I went in the Lodge Pub and had a pint of La Cantina Brown Sugar, which I seem to recall having at the Ship and Mitre in Liverpool. In any case, I had only had a third at their beer festival and so chose to sample a full pint. The landlord was very friendly and asked my opinion as he was not a cider fan himself. I told him that it was nice and something different from what I usually had. I then went to search out some dinner, and like with the pub, I had done some online research. I found the place that I had scouted out, called the Hot Spot. As with the pub, I wanted to try something different and went for Chilli burger and Balti chips for £4.50. I was tempted by the curry but didn't have a knife and fork. Again, it was something nice, and by the time I'd finished eating it was 7.15, so I headed off to the game. 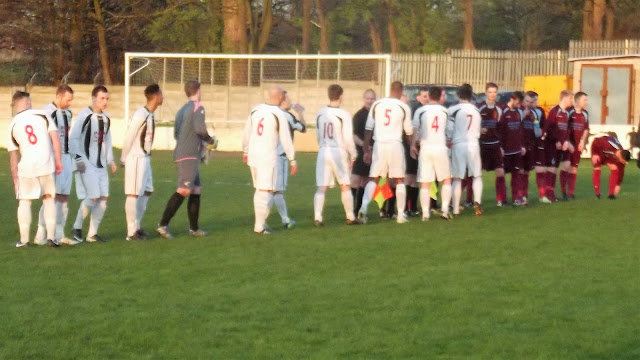 I paid for my entry and got a programme for £1.50 too. It was quite a quirky design, a cover used for the whole season and a little window cut out so that the opponents and date were printed on the second page of the programme. It was something that was commonplace in the 1990s and it made good sense so they could get the exact number of programmes that they needed. I then went and got some pictures, doing a circuit of the ground and finding space along the side in time for kick off. Ashton Athletic kicked off and put the ball straight into touch after around 3 seconds. It was pretty equal to start with but Alsager had the first real chance of the game, forcing the visiting keeper into a good save after 10 minutes. On 23 minutes Ashton Athletic took the lead with their first clear-cut chance of the game. It was a close-range finish that I didn't have a great view of as I was down the other end of the pitch. There weren't a huge amount of chances but on the stroke of half-time, the visitors doubled their lead as the striker slotted the ball into the bottom right-hand corner from inside the area. At half time I went and had a look in the clubhouse. Looking at the league table in the programme it was going to take something special to get Alsager to stay up. I got myself a Bovril and went around the other side of the pitch to watch the second half as my mobile signal was very ropey on the near side.  The second half started as the first ended with Ashton well on top and it looked as if there was no way back for the hosts. But on the hour mark, a goal was pulled back with a close-range finish. A minute later and they went close again, having a shot cleared off the line. It looked to be out of reach again on 69 minutes as the visitors regained their lead with a header from a good cross. Right at the death, Alsager pulled one back with the best goal of the night. The visitors failed to clear a corner and the shot was driven in from just inside the area. And that was how it ended, and all the talk was of relegation amongst the Alsager fans, which now looks very likely sadly for them.

It had been another good evening watching football. I got back to my car and put my hotel into my sat nav. It was roughly an hour away and as soon as it got to 10, I tuned the radio to Radio City in Liverpool, where they have a chat show with Pete Price that I like listening to. I got to my hotel at 10.40 and was greeted by a friendly receptionist who told me where my room was. It was the usual Travelodge room, clean and decent value. I listened to the radio while typing up my blog before going to bed and watching Coronation Street on my iPad.

WOOD PARK STADIUM is a traditional non-league ground. It has cover on both sides, a mixture of seating and terracing. I'd guess at about 150 seats and another 400 standing under cover, so lord knows why it was considered not good enough for step 4. The club suffered a blow in 2011 when their clubhouse was burnt down. This resulted in them having to play games at other venues, but eventually, they got things sorted and now have a new clubhouse which is really smart, but with a fairly limited range of drinks. The Bovril I had from the tea bar was nice and they had a good selection of other food at reasonable prices. There was no club shop that I could see. The town is about half a mile away and has a great selection of food and drink places for a small town. The Lodge pub was excellent with a wide range of real ales and ciders, while in the food side The Hot Spot does all sorts of nice things at decent prices. 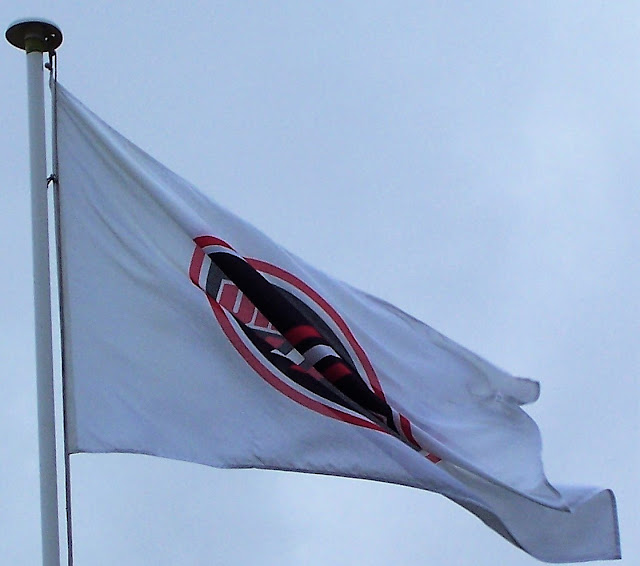 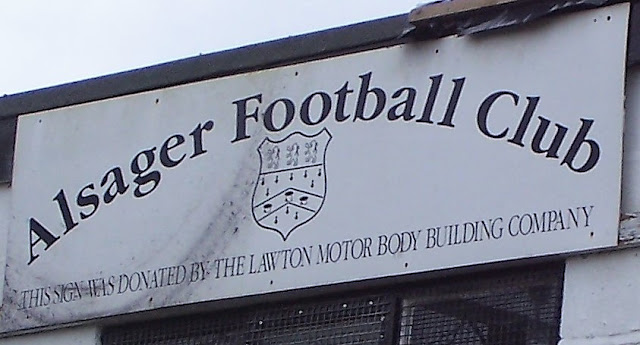 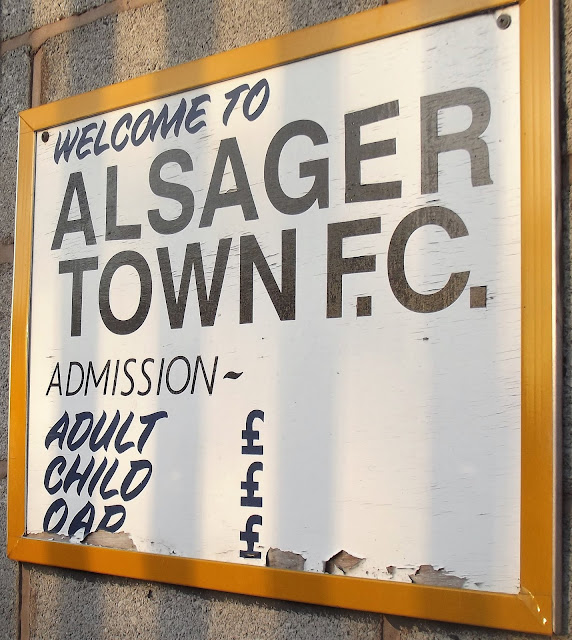 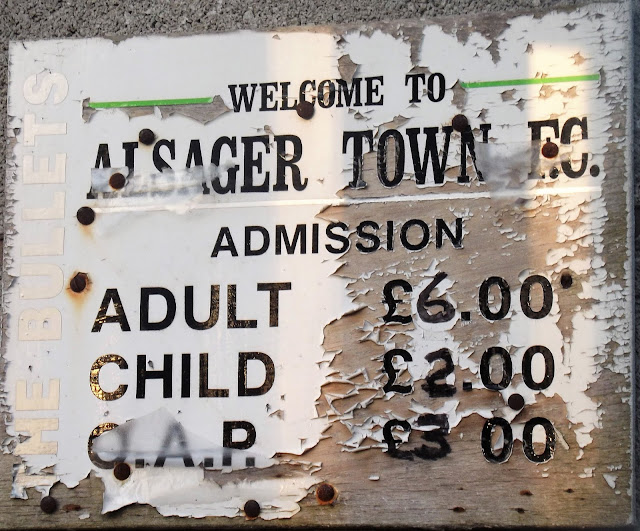 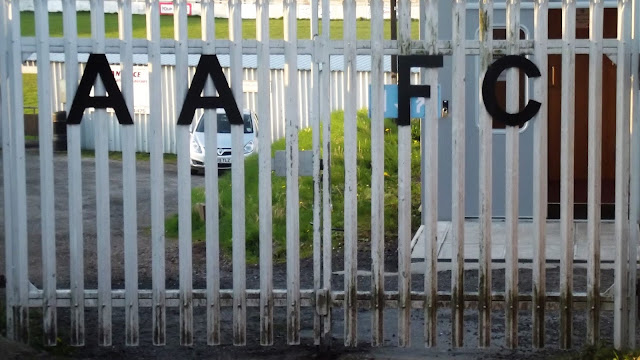 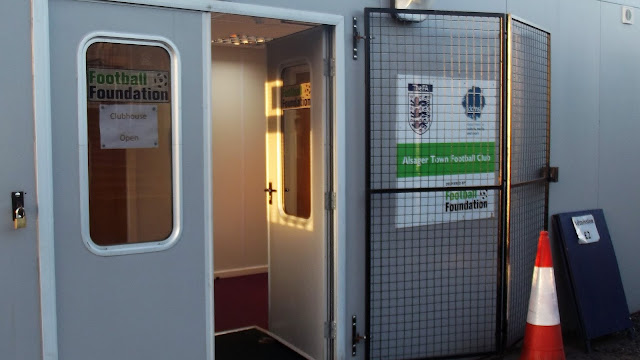 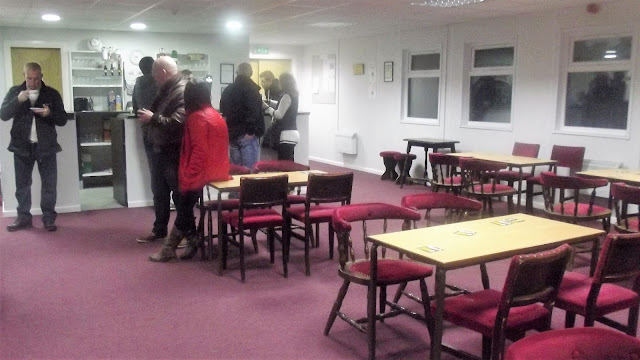 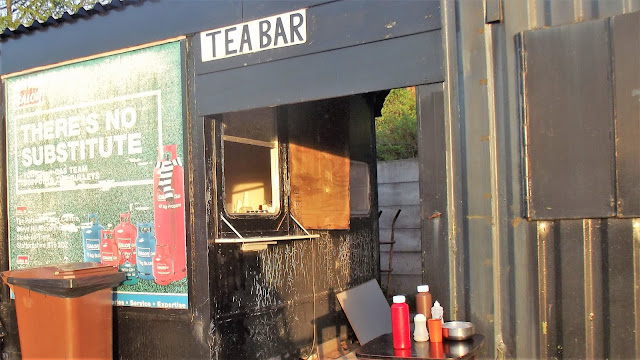 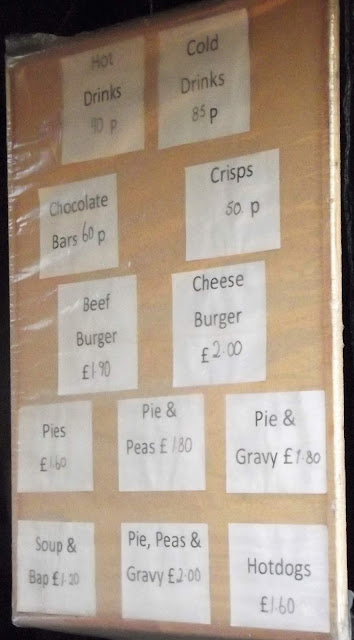 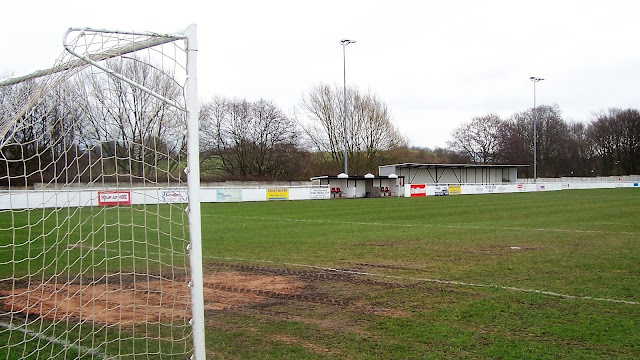 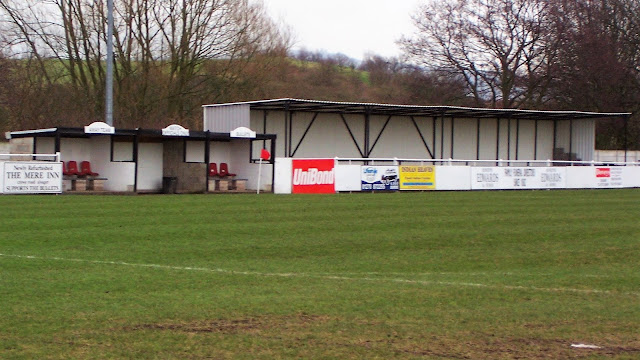 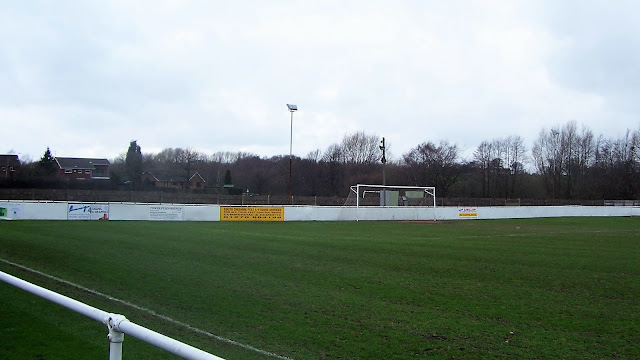 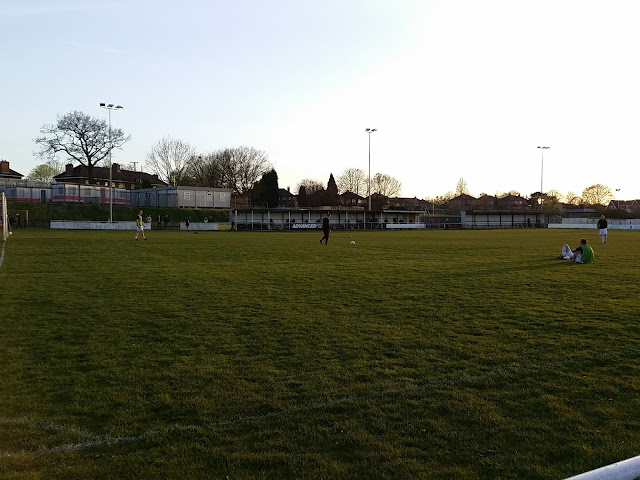 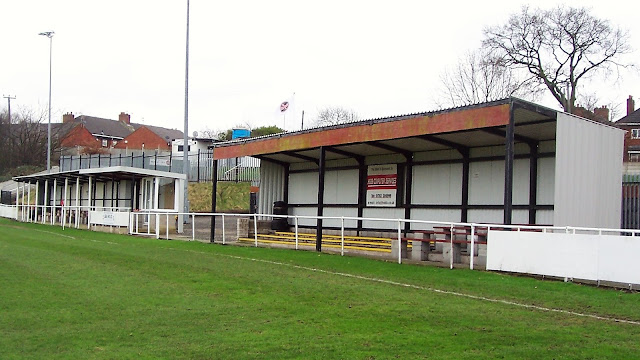 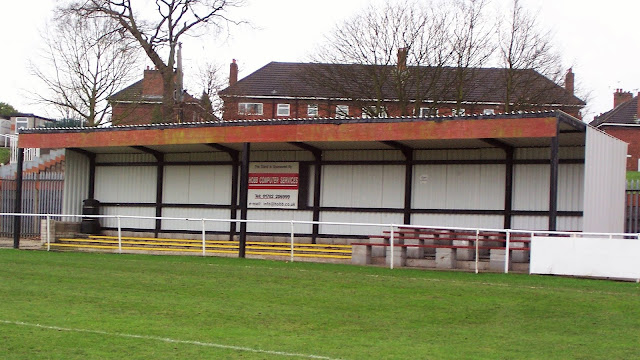 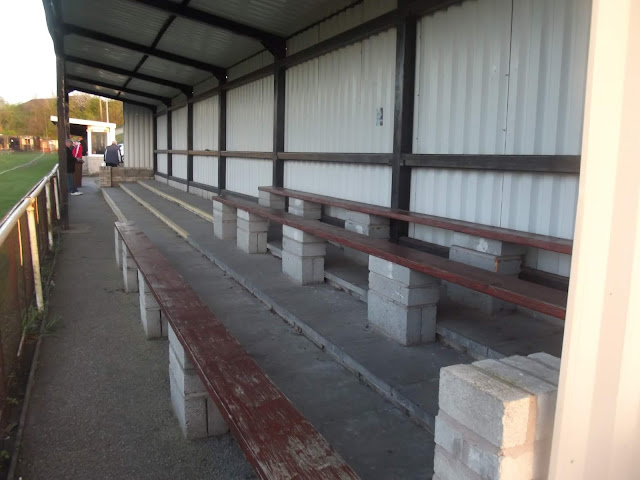 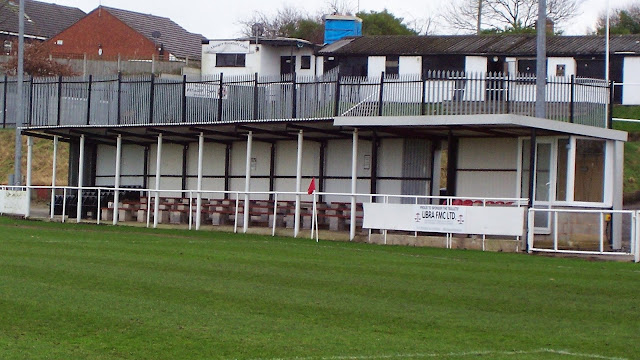 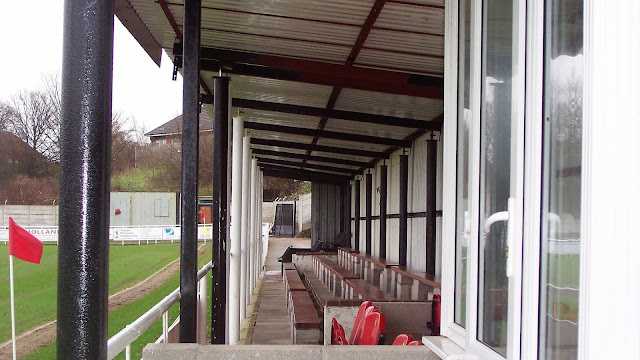 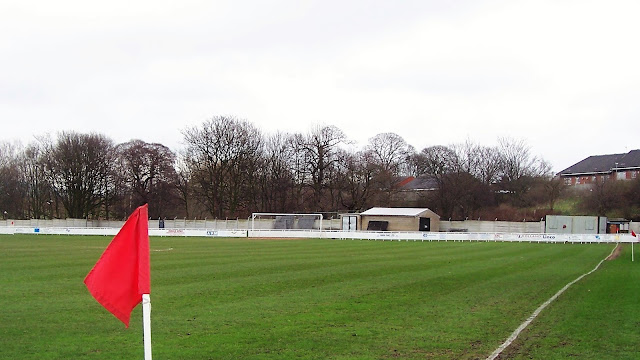 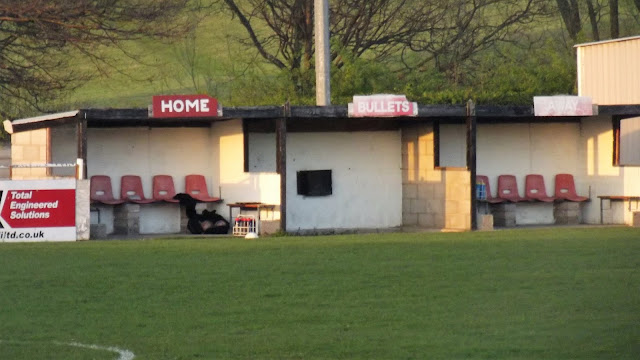