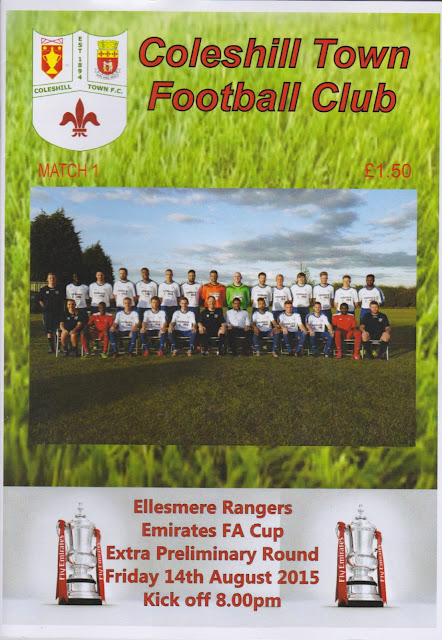 TAMWORTH FC was founded in 1933. Originally playing in the Birmingham & Midland leagues, they joined the Southern League in 1972. They were generally successful in their efforts in Southern Division 1 North and moved to the Northern Premier League around the turn of the '80s. 4 seasons there proved a struggle and they rejoined the Southern League in 1983. The change of league did not help their fortunes and they were relegated back to the Midland League in their first season. 4 seasons were spent there before they earned promotion in 1988 back to the Southern League. Since then they have not looked back. They were champions of the Southern League Midland Division in 1997 and earned promotion to the Southern Premier, which at that time was step 2 of the non-league pyramid. They reached the Conference Premier in 2003 and spent all but 2 seasons there until they were again relegated in 2014, finishing 23rd. Last season saw a steady 7th placed in the Conference North, as they sought to return to the top division of non-league football.

In the FA Cup Tamworth have had many memorable runs. Probably the most notable and one of the most recent ones came in the 2005-06 season. Starting in the 4th Qualifying Round, they defeated fellow non-league side Altrincham 4-1. They then travelled to league side AFC Bournemouth and came away with a 2-1 victory. In the 2nd Round, they defeated Hartlepool on their own patch to set up a game with Championship side Stoke City. After a hard battled draw at the Britannia Stadium, they took them back to The Lamb where they only lost on penalties after a 1-1 draw. They also got to the FA Trophy Final in 2003 where they lost to Burscough and won the FA Vase in 1989 - beating Sudbury Town 3-0 in a replay at Peterborough's London Road ground. The most famous player to pull on the club colours is Paul Merson. The former Arsenal star played a handful of games in the mid-2000s before retiring from football. 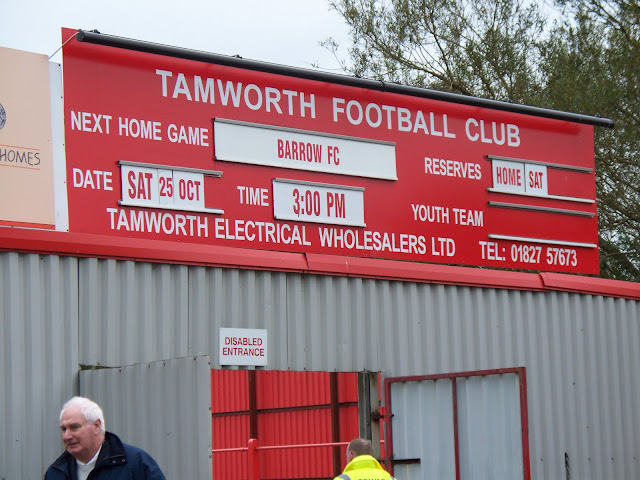 I was up in Coventry at a friend's party on Friday night and stayed over. So I looked at the fixtures for the following day, and fancying a game in the FA Cup, I opted for Tamworth v Barrow. En route, I visited a few grounds, probably the best of which was  Hinckley United's Marston's Stadium. I made the journey without much trouble, and was at the ground, shortly after 1PM. The first thing I did was go to the club shop and pick up a few old programmes and a pennant, that was only £1. After that, I went into the ground, and into the bar for a pint and something to eat. There were quite a few Barrow fans that had made the journey  And they would have been delighted as their team won out 4-0 winners. Just before half time, Steven McNulty put the Bluebirds ahead. Then after half time, Richard Brodie put Barrow further ahead. Tamworth then had keeper Dave Bevan sent off on the hour, and worse still for them, Dave Brown scored the resulting penalty. Late on, Brodie, on loan from York City, grabbed his second and Barrow's 4th to complete a scoreline that was fully justified.

I had been searching for a programme for my original visit to Tamworth for absolute ages. eBay and many club shops were searched, without anything cropping up. Back in the days when I was not a serious groundhopper, I either didn't buy a programme or threw it away after reading it, and this must have been the case in this instance. Fellow hopper Anwar had not been to the ground yet and was keen to visit if I could drop him off there. The original plan was to drop him off there, popping in the club shop to see if they had the old programme I needed, before going on to another game. But then a Friday night game came up at the ground, and with little else on that night, I asked Anwar did he fancy it. Luckily he said yes, and so the trip was planned a couple of weeks in advance. 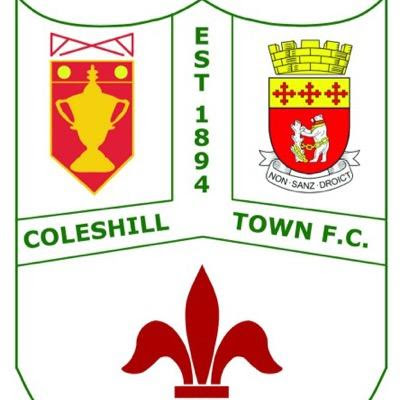 The home team on this occasion would be Midland League side Coleshill Town. They were playing at Tamworth due to their own ground having a 3G pitch laid, which in itself would be a real bonus come the cold depths of winter. Looking at their FA Cup history, their standout season came in 2010/11 when they reached the 3rd Qualifying Round. An entertaining 4-4 draw at Brocton kicked things off in the Extra Preliminary Round in August, before a 2-1 victory in the replay saw them progress. The Preliminary Round resulted in a trip to Heather St Johns where they grabbed a hard fought 3-2 victory.  In the First Qualifying Round it was on the road again, this time to a side 2 leagues higher than them. Southern Premier side were dispatched in an impressive 3-1 victory. On then to a home game against NPL D1 South side Lincoln United, who the previous season had only narrowly lost out to Cambridge United in the 4th Qualifying Round. An astonishing 5-1 victory was clocked up, which set them up for a game against Conference North side Nuneaton Town in the 3rd Qualifying Round. Sadly they could not repeat their heroics, going down 6-0 away from home.

The opponents on the night, Ellesmere Rangers also had a run, though it wasn't on the scale of the home sides, it was still pretty impressive. It came in 2008/09, which was their debut season in the competition. Starting in the Extra Preliminary Round, they beat Dudley Sports in a 4-0 thrashing. An impressive result was obtained in the next round, beating Southern League side Bromsgrove Rovers 2-1. Their participation in that season's competition ended in the 1st Qualifying Round as they lost out to a replay to Cradley Town. Subsequent forays have proved unsuccessful - their only subsequent victory came in 2013 when they beat Gornal Athletic 2-1 and they paid for that success in the next round with a 6-0 defeat at Brocton. 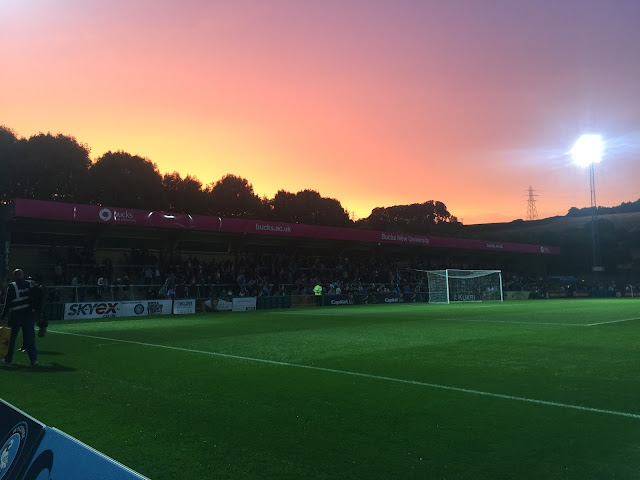 During the week, I watched Fulham narrowly beat Wycombe in the Carling Cup, but the Chairboys did themselves proud. From then on until the afternoon of the game, I was willing the time to go by, as well as football, it was the start of my week off from work. On the Friday it was very busy at work, and I was in a bit of a rush, finishing at 1. I was happy to see the Football Traveller magazine on my doormat, though really it should have been there the day before, but for Royal Mail’s shoddy service. I had a flick through, looking for potential FA Cup replays next week whilst having a bath. I checked that the game was still on as there had been lots of rain during the week, but there appeared to be no problems. After a spot of lunch, I left home at 2.30 to meet Anwar in Aylesbury. The journey up was a pain in the backside. The M40 was a no go due to some jerk overturning a lorry so we had to go through Milton Keynes and up the woeful M1. The world's longest running roadworks were still in place and it showed as we made slow progress. Once we got on the M6 it was nice and free-flowing, but the delays meant we didn't arrive until just after 6. As keen collectors of programmes, we made sure we snapped ours up early. Once we had them we could relax and walked into town. It looked a really good town but thanks to the earlier delays everywhere was closed. Pubs were still open though. First stop was the King's Ditch where I got 2 pints each of 'Badger Spit' and 'Puckered Pear' to take home. It was then onto the Penny Black where I had a pint of Thatchers Heritage and a Bacon Cheeseburger with chips, costing me £7 in total. Annoyingly my cider had leaked but not spotting any obvious place for it to be leaking from I made sure I kept it upright. After stopping at Lidl for snacks I went back to the car and secured my drinks as well as possible. It was about 7.15 when we got back to the ground and after getting pictures we chatted to fellow hoppers Jack Warner and Chris Berezai before the game. I had a quick pint of Carling Cider in the bar before making my way outside just before kick off. 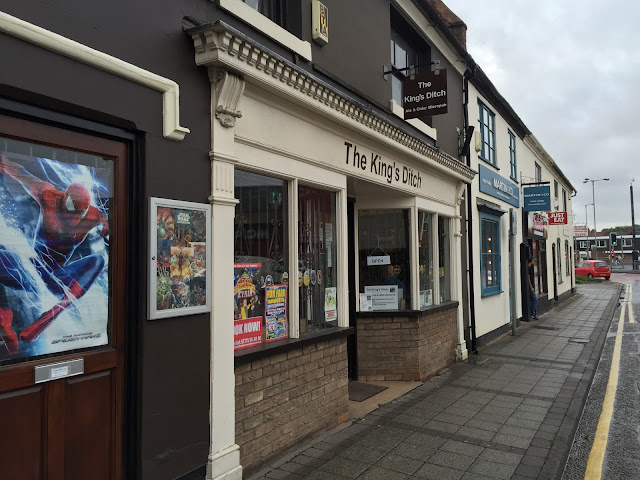 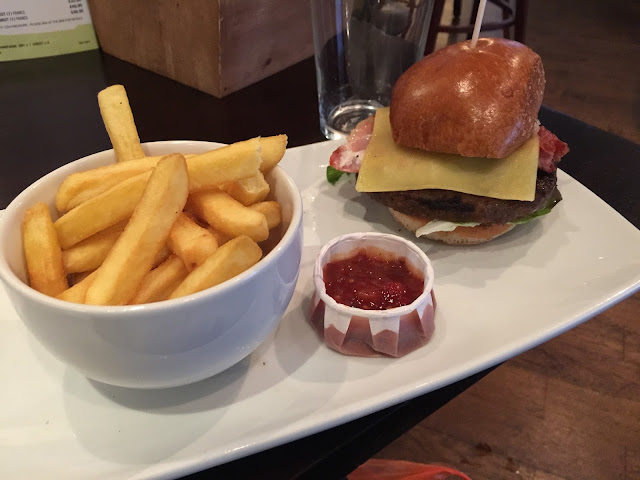 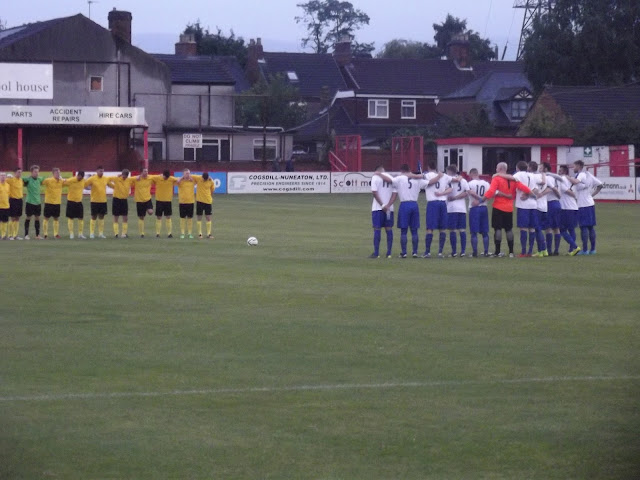 Coleshill had the better of the early exchanges and it was Luke Edwards who gave them the lead on 4 minutes with a low drilled finish. A minute later Luke Barlone doubled the lead with a great lob over the Ellesmere keeper. After 10 minutes Thomas Weale got Coleshill's third from a great cross to seemingly settle the game. The Ellesmere number 2 was the best player for the visitors and how they wish they had more of him as Coleshill looked to run riot. It was another good finish on 21 minutes as Luke Barlone got his second. At that point, Ellesmere made their second substitution but it didn't make any difference. After his side had hit the post twice, Luke Barlow completed his hat trick with a close-range finish on 25 minutes. It was 6-0 on 27 minutes with a close-range finish from Demetris Smilkle. 34 minutes it was 4 for Barlone and 7 for Coleshill with another simple finish. Ellesmere must have got a right rollicking at half time and that slowed the game down. Even so, Simeon Cobourne scored on 54 minutes with a smart finish into the bottom right-hand corner to make it 8-0. It was 9 on 61 minutes with Smilkle getting his second with a drilled shot into the corner of the net. Cobourne got his second and sent his side into double figures with a simple finish from a cross. The last goal of the game was the best, a long ranger from Dean Rathbone which made it 11-0. Ellesmere had their keeper sent off on 75 minutes but there was no further scoring. The result was astonishing in front of a crowd of 121, There were a fair number of hoppers which probably made up the bulk of the crowd. Myself and Anwar had certainly had a good day out and I'd enjoyed my revisit. Thankfully it was a much simpler journey home with just a couple of spots of roadworks. I dropped Anwar off at 11.30, getting home myself at 11.50. I watched Youtube videos and typed my blog before watching Corrie in bed and going to sleep

Below are the goals, uploaded by Youtube user 'Swifts Fan'

THE LAMB is an excellent non-league ground, even if it is not up there with the best in the Conference. 3 sides are terraced, 2 of these fully covered and the remaining side is a fairly decent stand, which holds just over 500. The tea bar is one of the better ones and the bar isn't bad either - offering Strongbow & Carling Cider. The club shop in 2008 had a good range of programmes too, plus well-priced souvenirs - I picked up a pennant for 50p!

The real gem though is that it's close to the town - 10 minutes walk away. My favourite place was the Kings Ditch which had 16 ciders on tap and you could take them away too. A decent range of other pubs too - I had a good value meal at the Penny Black, plus if you need snacks there are lots of cheap shops about. Overall, well worth a visit and I'd be happy to return for another game. 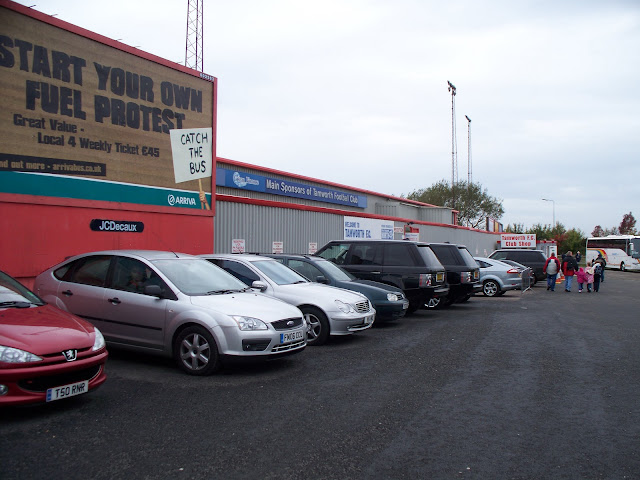 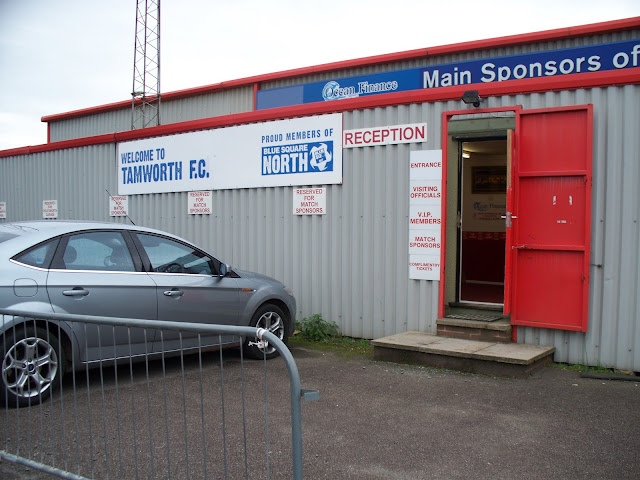 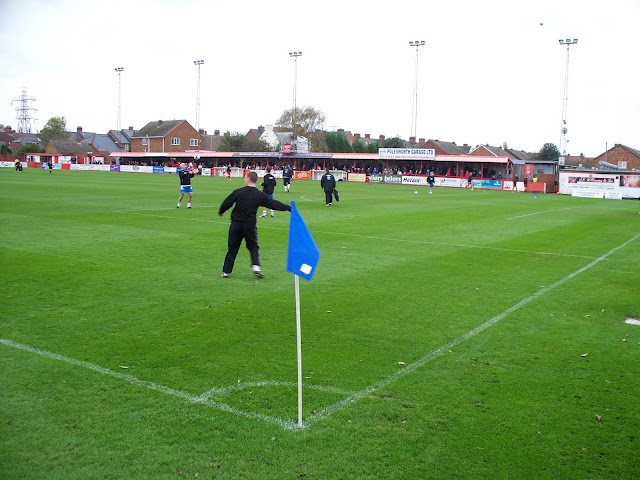 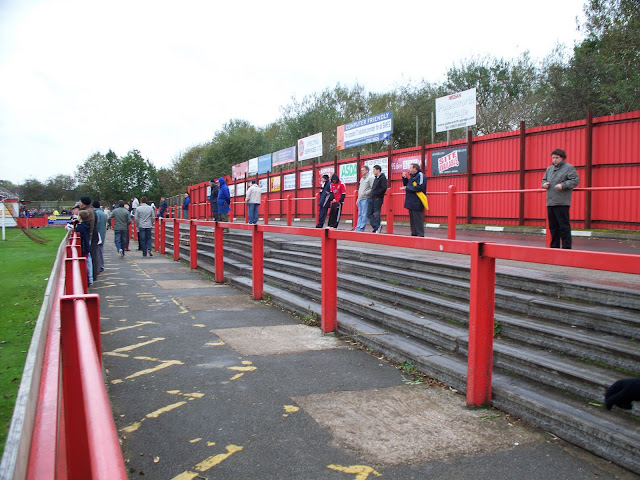 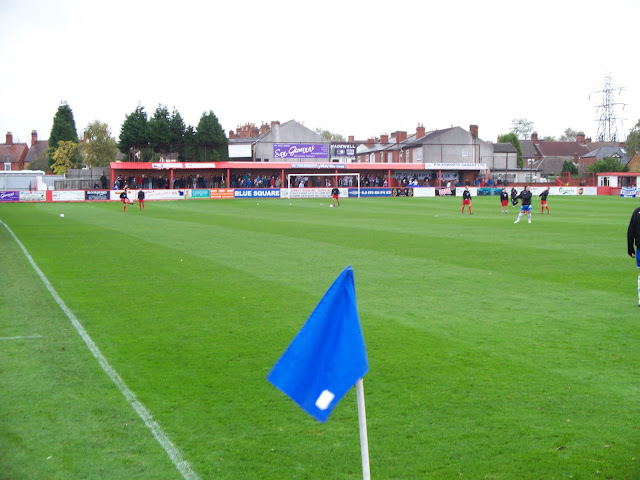 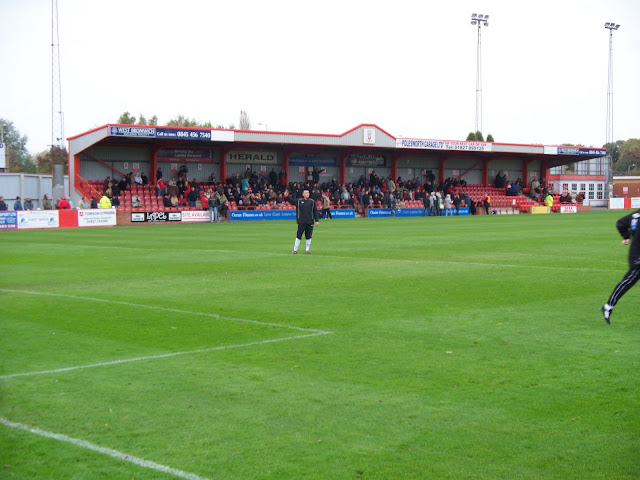 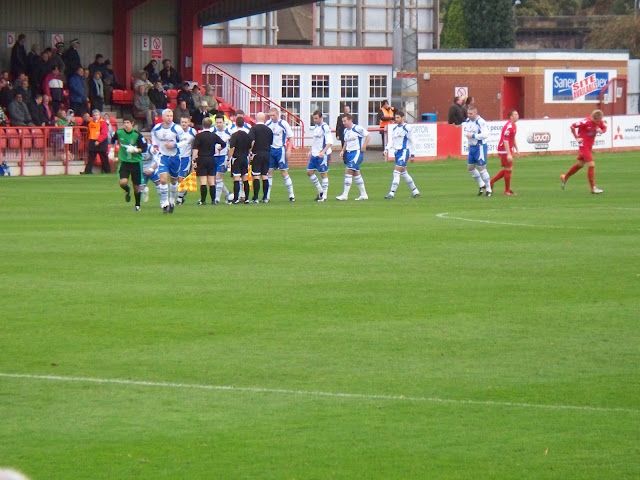 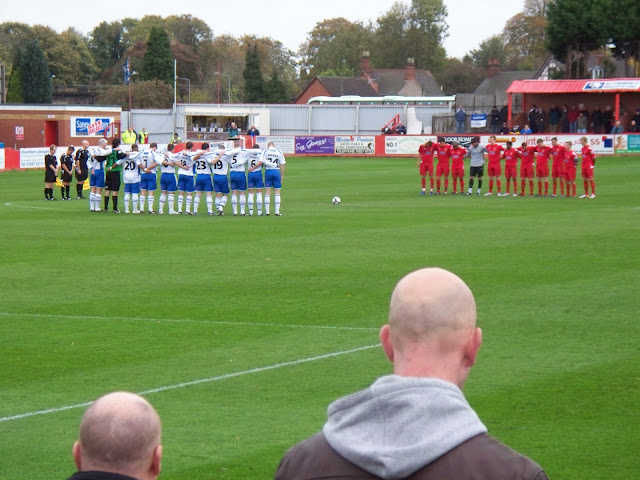 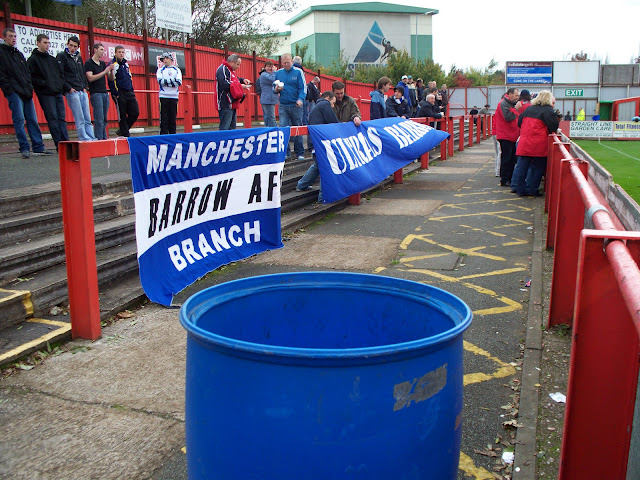 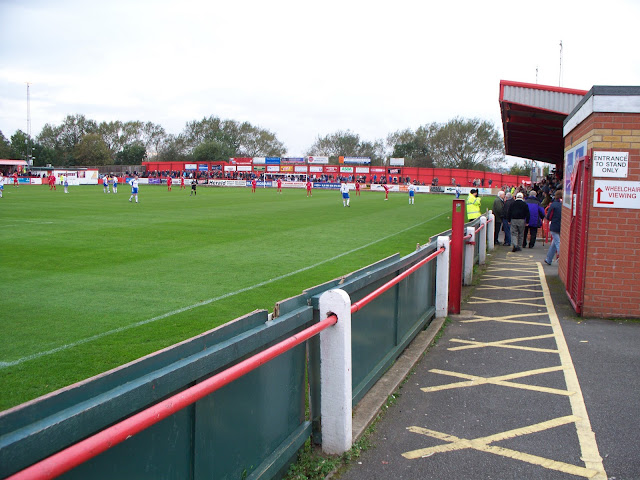 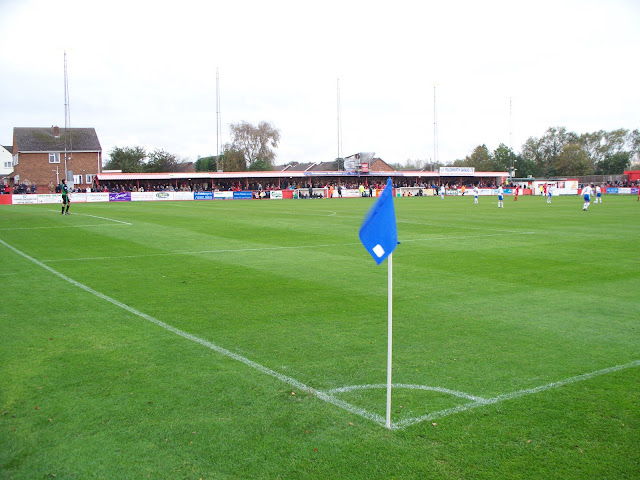 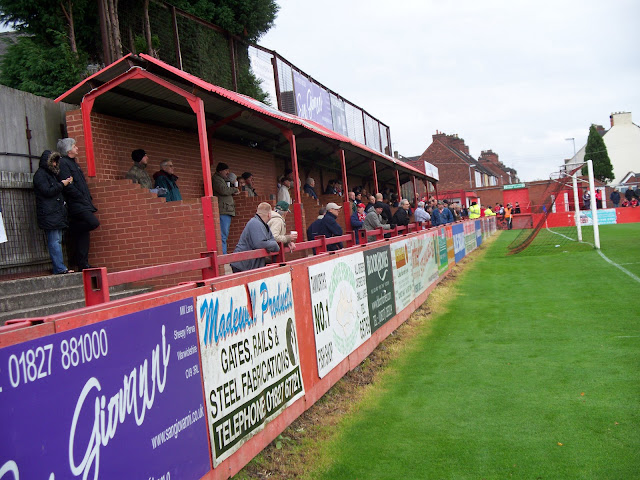 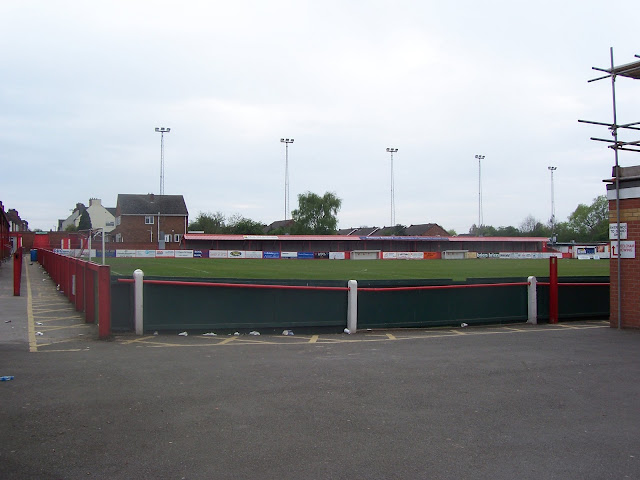 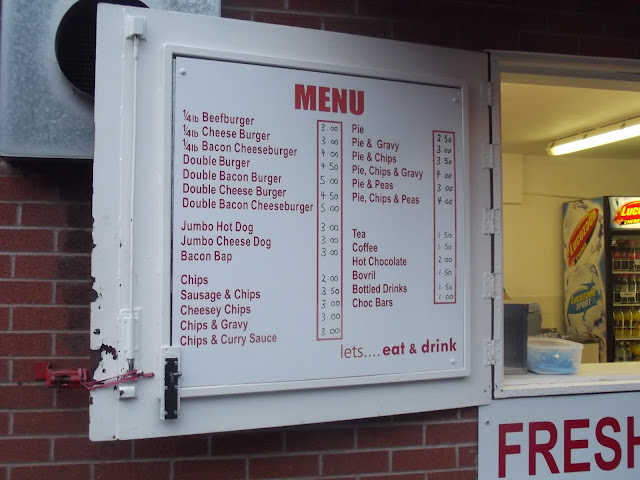 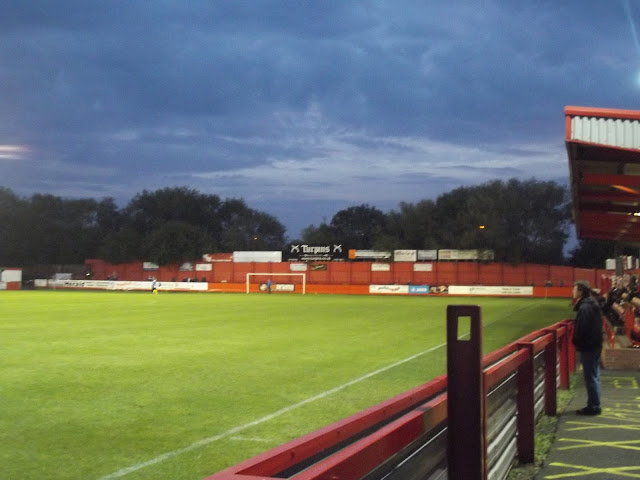 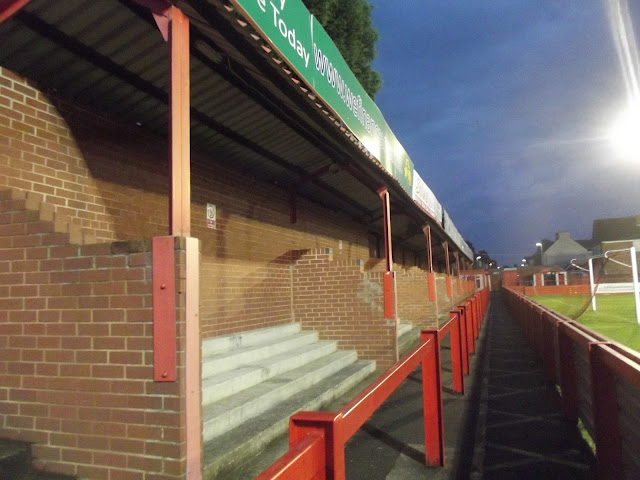 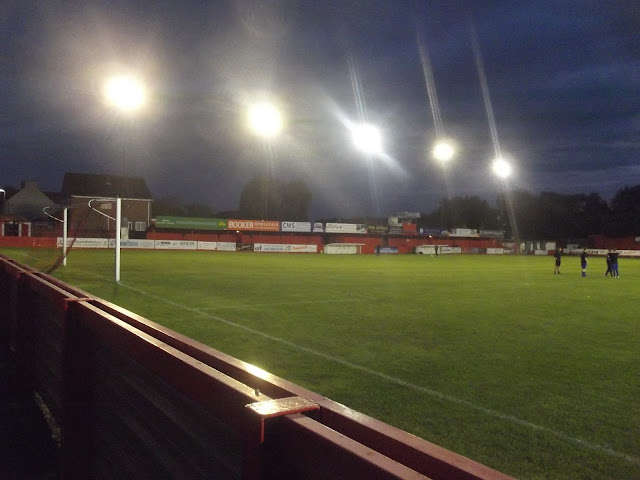 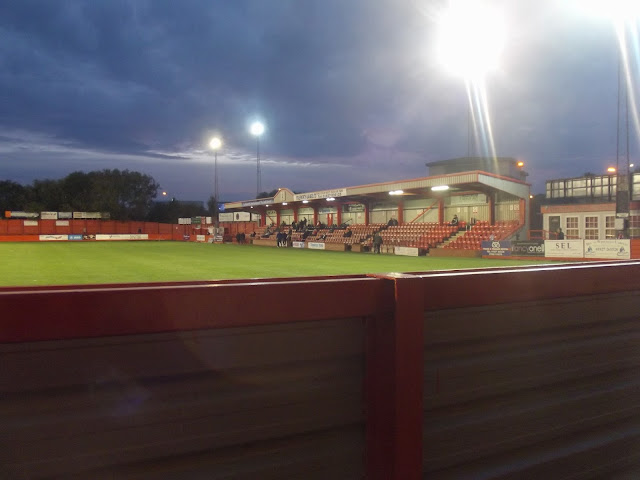