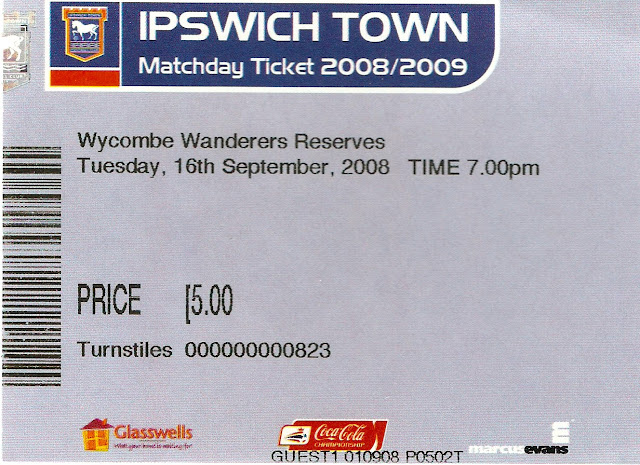 1:  The club was established in 1878 and were known as Ipswich AFC until 1888 when they merged with Ipswich Rugby Club to become Ipswich Town FC. One of the founding members of the club was local MP Thomas Cobbold who has a stand named after him at the ground.

3:  In 1938, Ipswich Town turned professional and joined the Football League. They started out in Division 3 South, their most disappointing finish coming in 1950 and 52 when they finished 17th. Since the league went national in 1958, they'd remained constant members of the top two tiers, at least until this season. Under the guidance of Sir Alf Ramsey who would go on to win the World Cup with England, they were Division 2 Champions in 1961 and even won the top tier the following season.

5:  Bobby Robson also won the UEFA Cup with Ipswich Town in 1981, beating Dutch side AZ Alkmaar 5-4 in a two-legged final.

6:  In the League Cup, Ipswich Town have reached the League Cup semi-final on four occasions, the latest in 2011 when they went out 3-1 on aggregate to Arsenal.

7:  With no other Football League sides in Suffolk, Ipswich Town have a rivalry with Norfolk side Norwich City, who play some 40 miles away. In competitive football, Norwich hold the upper hand with 47 wins to Ipswich's 45. The other 23 matches ended as draws.

9:  Ipswich Town played their early games at Broomhall Park, moving to Portman Road in 1884. Since the 1989 Taylor Report, following the Hillsborough Disaster, the stadium has been all-seater. Following expansion in 2002, the stadium has a capacity of 30,311.

10: The town of Ipswich has a population of just over 133,000. It's home to two other semi-professional sides in Ipswich Wanderers and Whitton United though the latter play on the outskirts of the town. Famous people from the town include TV star Richard Ayoade and serial killer Steve Wright.

Having never had the opportunity to visit Ipswich Town before, I was really pleased when our reserves were put in the same league as theirs. I marked it off as a "must visit" as soon as the fixtures came out, and pleasingly it would be fairly early on in the season where it wouldn't be too cold for a midweek game. On the day I made my way down to Suffolk, doing the usual thing of stopping at grounds on the way, including a trip to Colchester to see how our rivals ground shaped up. I got to Ipswich around 5pm, 2 hours before kick-off, and so went into town to find something to eat, Suitably fed, I then went to the ground, with still over an hour to go till kick-off. After eating up some time by reading my paper, I took some pictures of the outside of the ground and went in about 20 minutes before the game started. There were only a few hundred fans there, but those that did turn up were in for a real treat. 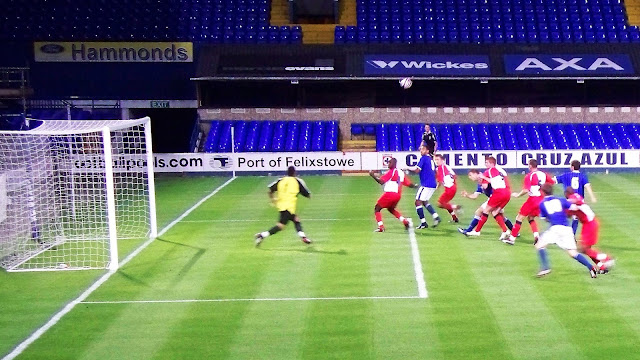 It would be future Wycombe loanee Dean Bowditch who put Ipswich ahead in the first minute with a header. However, it would be all square after half an hour, Matt Harrold's pass finding Magno Viera who finished from close range. Bowditch would put Ipswich back ahead on 36 minutes with a low shot and the same player finished from the edge of the area on 39 minutes to complete his hat trick. The game looked as good as over at 3-1, but Wycombe would make a spirited second-half comeback. The second half was just two minutes old when Alex Bruce conceded a penalty for pulling back Viera and Matt Harrold converted the resulting spot-kick. A swift break allowed Robert Rice to finish from close range for the equaliser and there was still time for a winner fifteen minutes from time when Dan Fitchett charged down Lewis Ward's goal kick to score with his first touch of the game, having come on as a substitute. 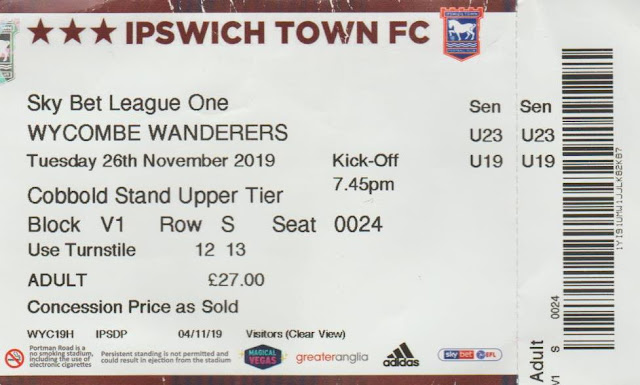 When the fixtures were announced for this season, Ipswich away was one of the ones I was looking forward to most. Having only seen our reserves there, albeit an exciting 4-3 win, I was looking forward to doing a first-team game. The game was scheduled for 12th October, a Saturday and that would have been preferable for me. However, Ipswich Town (and former Wycombe) manager was confronted with a few of his squad facing international call-ups and so took the option to call off the game. A long midweek trip was far from ideal, especially with me up at 4 am for work. But it did have it's advantages, leaving the Saturday free which I spent doing a groundhop at Epping Town and seeing one of my favourite bands - The Lancashire Hotpots - in the evening. The new date was not a bad one either when the weather would be cold and miserable, at least it saved me the hassle of waiting on pitch inspections for a non-league groundhop. My method of transport would be the same in any case, going on the independent supporters club coach and so a week before, I got that booked up and also purchased a ticket at the eye-watering price of £27. 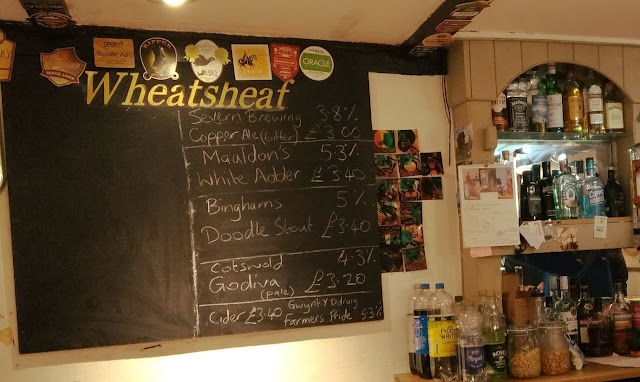 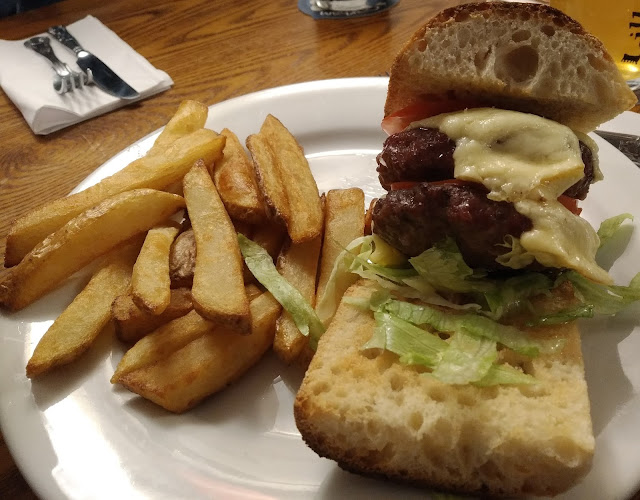 The day of the game came and I'd had a good night's sleep for once, though I was woken at 8 am by noisy builders next door. I woke up and did the usual thing of getting ready and having breakfast, although my plans to walk down town were thwarted by the forecast of yet more rain. As it turned out, this was not entirely accurate, but even so, I drove down to Morrisons to get some stuff for the game and also some lunch. There were games falling all over the place and had I not had this game, I'd have probably had to stay in for the night. I left with my dad who was also coming and got to the coach stop five minutes before it was due to leave. It was on time and soon after we had made all our other stops and were on our way. I found out we were stopping at a pub in Tattingstone, sadly the one with the disappointing cider selection with the decent one being 25 minutes walk away, so not viable to make a quick trip to. In any case, it was closed for the night. The coach fare at least, was reasonable at £19, a bargain compared to the despicable £60 my brother had been quoted for a train from his work in London, he’d unsurprisingly decided not to bother. As usual, I had a go on the coach sweepstake, pulling out 2-0 to Wycombe which would be most welcome. After a few traffic delays, we were at the pub at 5.20. The Wheatsheaf in Tattingstone was a decent establishment with the owners opening early for us and also doing food which they don't usually do on a Tuesday. Mutually beneficial for both parties of course, but it's often quite tricky to find a pub that ticks all the boxes, especially with regards to coach parking. The still cider on offer was Gwynt Y Ddraig Farmers Pride, not strictly Real Cider due to its use of concentrate but one of my former favourites and a good session cider at 5.3%. Nowadays I'm into the more mind-bending 8% dry as sandpaper stuff, though the way I knock it back, it's maybe a blessing in disguise that it wasn't on offer. Food was also excellent, with me opting for burger and chips, all homemade. I kind of wish I'd opted for the pheasant, but my default it came with mash, a definite no-no for me. 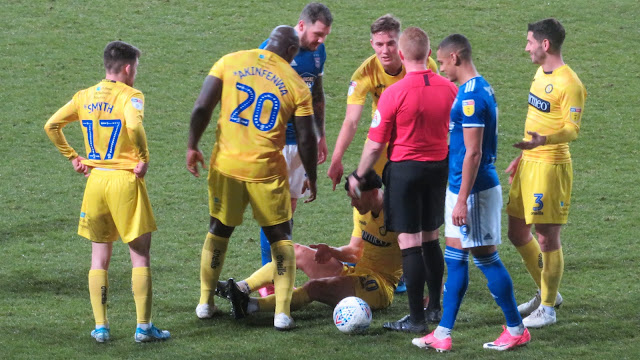 Three pints later, I was in fine fettle, with us leaving at 6.45. It was a bit of trek with traffic and we were at the ground by 7.30. With the ground ten minutes away, we just made kick-off. The game had a bright opening, though the referee seemed heavily in favour of Ipswich with Paul Smyth unfairly penalised after a good run and holding off his marker. Ipswich had a goal disallowed by the card happy referee, but the two sides going in level at the break was a fair reflection of the game. The second half saw Ipswich have lots of the ball but fail to muster a shot on target for the entire game. Wycombe even had a Joe Jacobson penalty well saved by the Ipswich keeper but in the end, gained a well-deserved point. With us five points clear, we head into 18 days rest in a good position, even if Ipswich have two games in hand. It was ten minutes back to the coach and then it took a while to get out of Ipswich. There were the usual midweek fun and games on the way home with a long delay on the M25 thanks to a closure. I got in just before 1.30 and wasn't tired at all which was a pain with me being up for work two and a half hours later. Overall, I'd enjoyed my revisit to Ipswich, it had been a good day out and a good result gained.

PORTMAN ROAD is an excellent stadium for the level. The two stands behind the goal - the Alf Ramsey Stand and The Bobby Ronson Stand are the most modern and tower above the other two stands. The other two stands are the Co-Op East Of England Stand and the Cobbold Stand, with part of the latter being given over to away fans, around 1,900 places in total. The overall capacity of the ground is just over 30,000.

Facilities at the ground are fairly standard - a well-stocked club shop and the usual dull catering options. The town is close by and has a number of decent pubs. I visited the Dove Street Inn which was good and is around a mile or 20 minutes walk away. 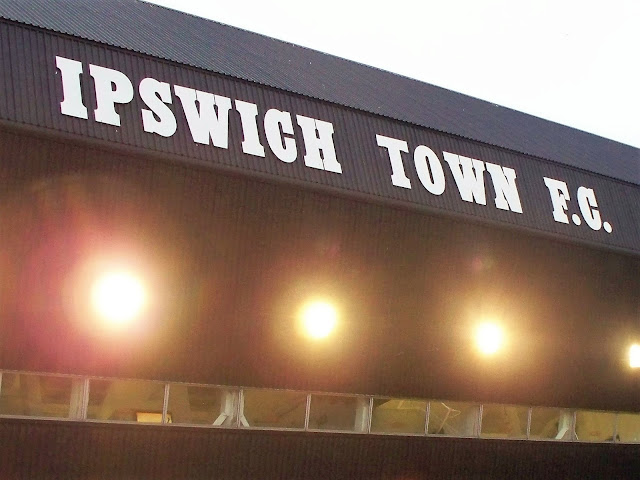 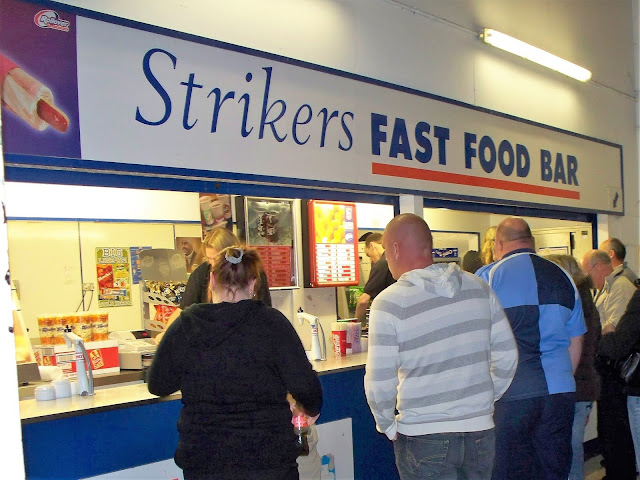 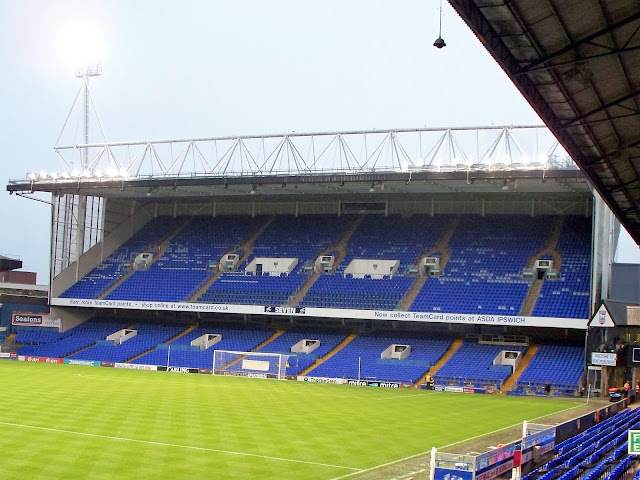 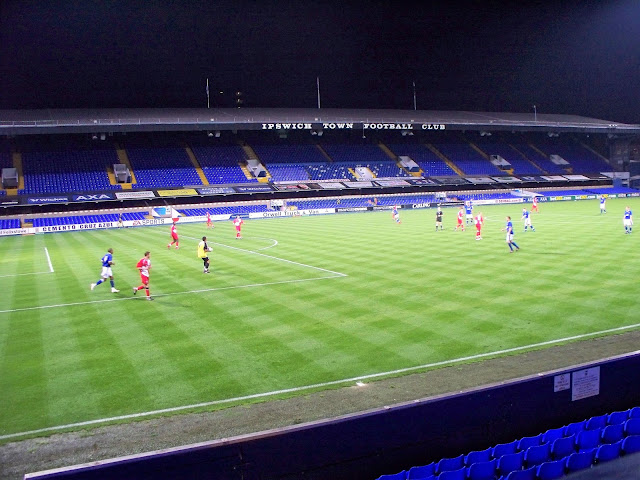 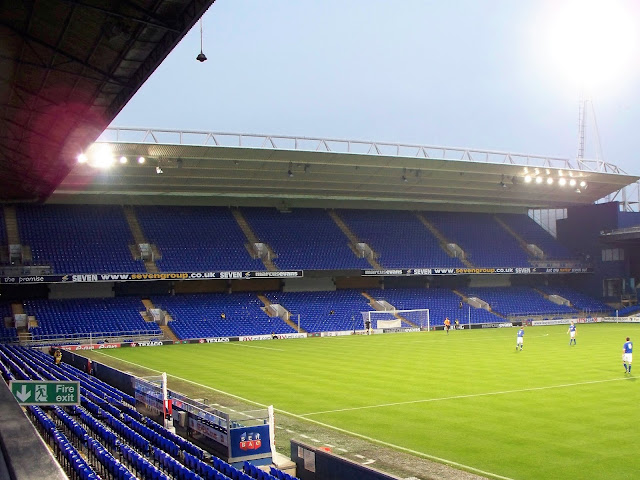 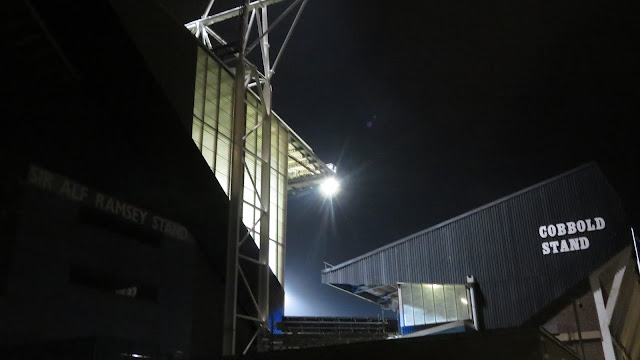 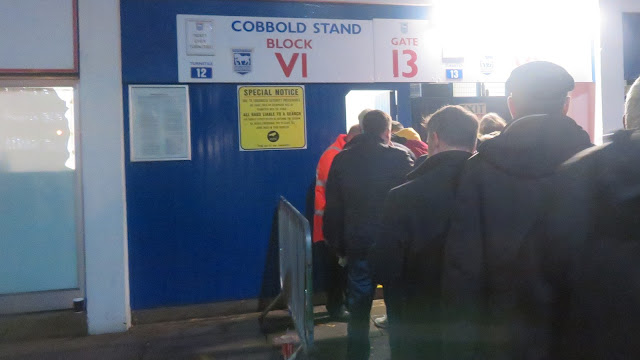 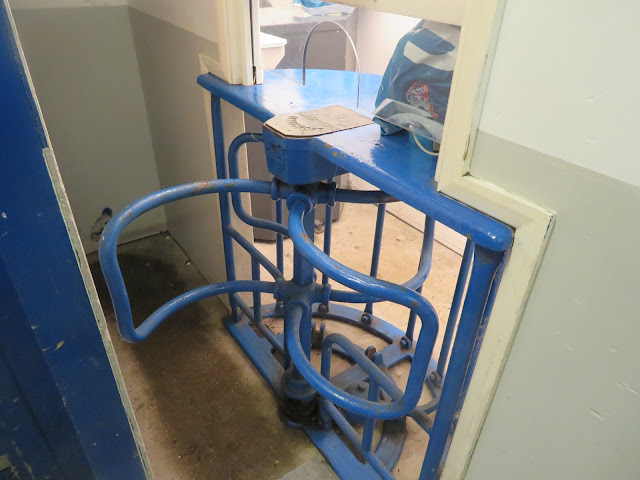 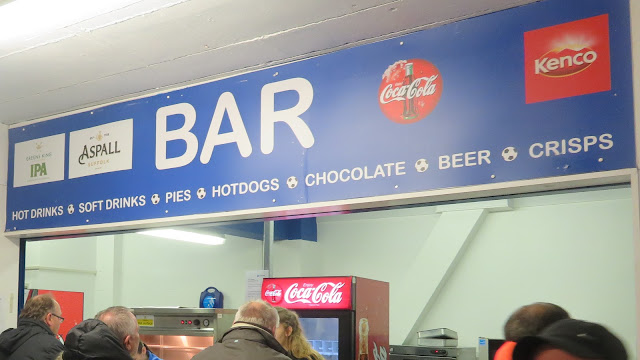 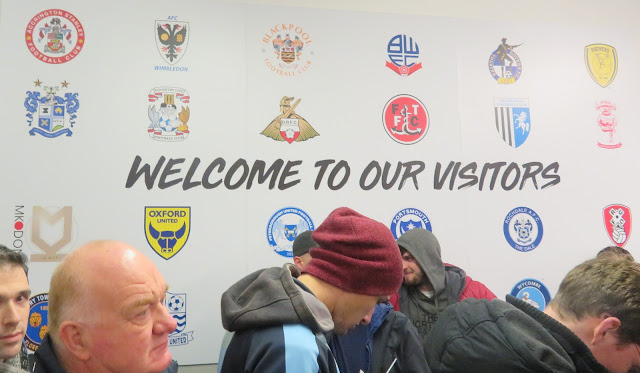 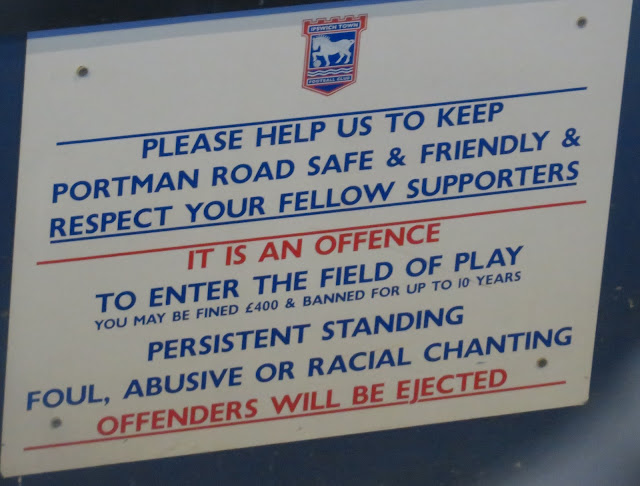 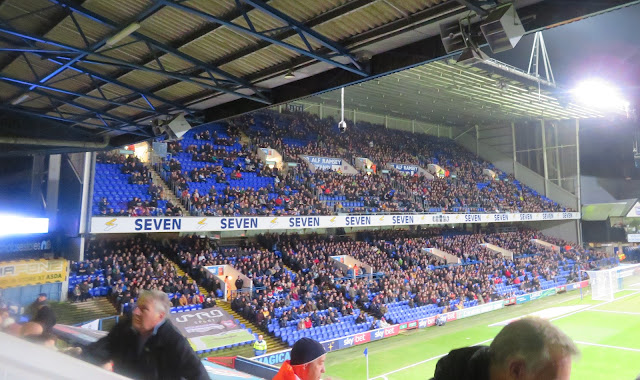 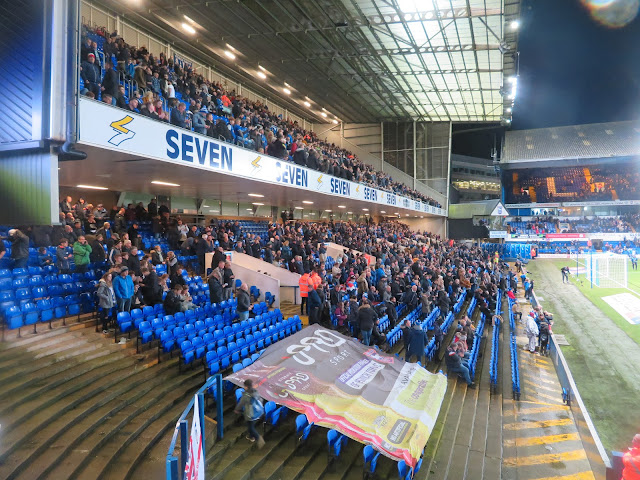 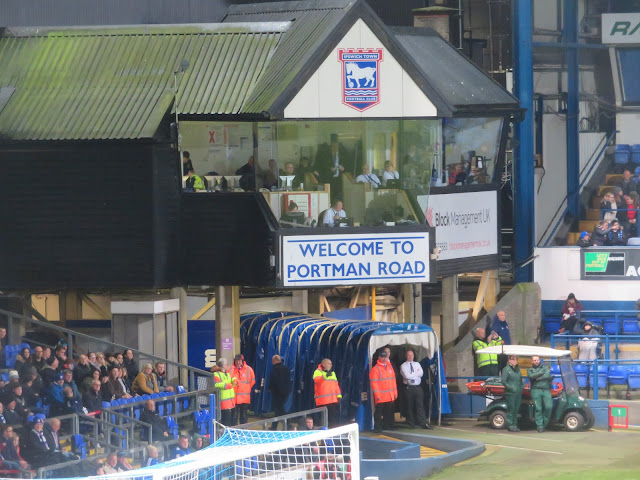 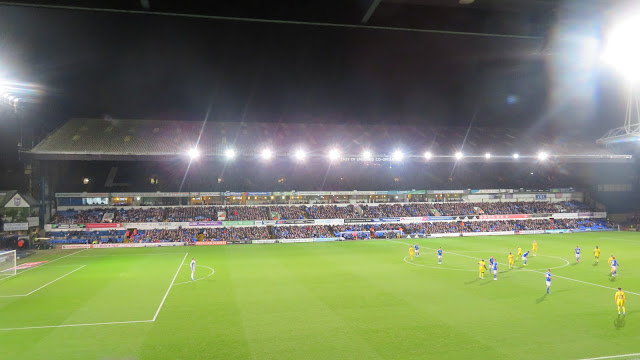 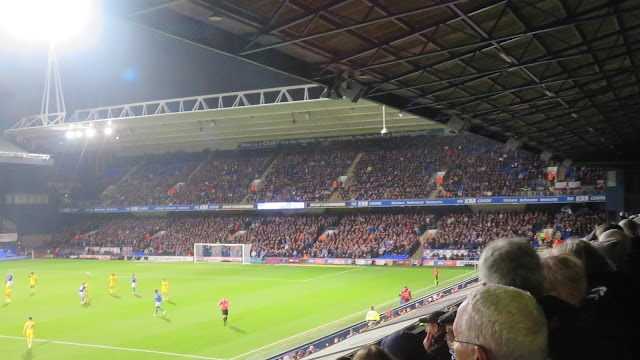 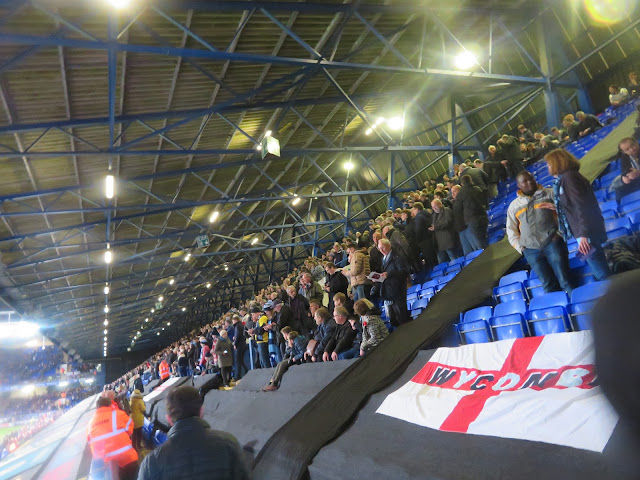