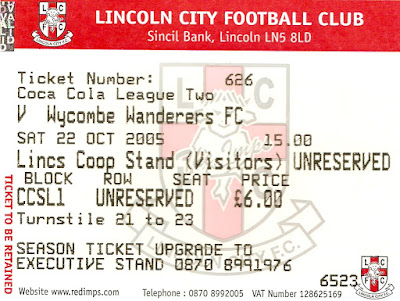 The club was formed in 1884 and initially started out in non-league football. After playing in the Midland League (of which they were champions in 1890, they were founder members of the Football League Division 2.  Lincoln City had spent single seasons away from the Football League, but they've always bounced back straight away. That was apart from 2011 until 2017 which they spent in the Conference, struggling in the main part and finishing as low as 17th in 2011/12. It took the brilliant leadership of Danny and Nicky Cowley to lead them back into the league - despite their highest previous finish being 13th the former Braintree Town and Concord Rangers pair led them to a convincing title win last season. The success has continued this season and the Imps look all set for another title challenge with the team pushing for the playoffs. It's a far cry from their record league finish since the league expanded to four divisions - this came in 1982 when under the leadership of Colin Murphy, they finished 4th in the third tier. In the early days of the Football League, they finished 5th in Division 2 in 1902, a point and a place behind Woolwich Arsenal.

Amazingly, Lincoln City's record FA Cup run came last season whilst they were a non-league club. Starting in the 4th Qualifying Round, they had routine victories over Guiseley and Altrincham to reach the 2nd Round. There, they faced League 1 Oldham Athletic and defeated then 3-2 in their first giant-killing. Victories over Championship side Ipswich and Premiershi[ Burnley followed before a 5-0 defeat at Arsenal. In the League Cup, the 4th Round was reached in 1967 where they lost in a replay to Brian Clough's Derby County. The FA Trophy Semi Final was reached in 2017, however, Lincoln City lost 3-2 on aggregate to York City. They also reached the Northern area final of the Football League Trophy in 2001, losing 2-0 on aggregate to Port Vale.  Local Cup wins include the Lincolnshire Senior Cup on a record 38 occasions with the runners-up spot being claimed a further 32 times. 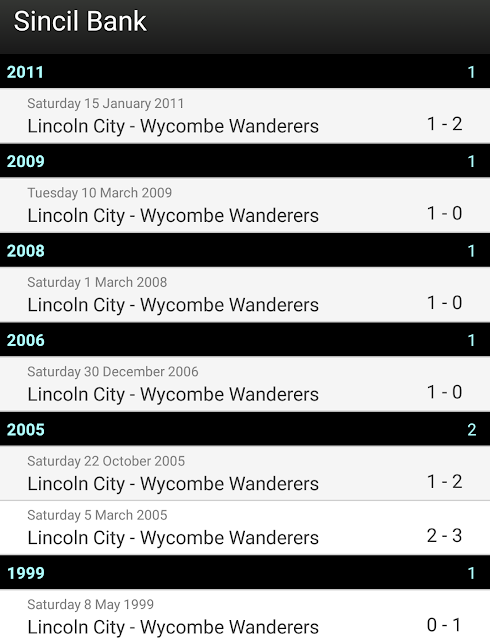 I'd made seven previous visits to Sincil Bank, prior to updating this blog. My first visit to Lincoln City's Sincil Bank ground was probably Wycombe's most famous one. It came after we had staged a miraculous recovery in the final weeks of the 98/99 season to give us a chance of avoiding relegation. We had beaten Manchester City and Wigan Athletic in recent weeks and needed results to go our way on the last day, as well as winning at Lincoln. As it turned out, we did the business, Paul Emblen scoring the only goal of the game 10 minutes from time. The unfortunate victims were York City, who had not been in the relegation zone all season, but a late bad run sealed their fate on the final day. Wycombe fans travelled in numbers to see the game, over 30 coaches went and overall 2,500 Chairboys attended the game. 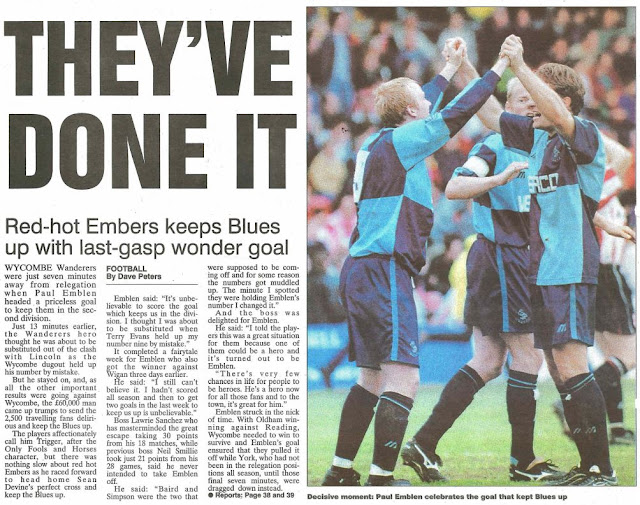 My subsequent visits produced a mixed bag of results, but  I used a combination of driving and supporters coach to get there. It was a mixed bag of results, Wycombe victorious on their first three visits and then Lincoln taking the next three games by virtue of a 1-0 scoreline. The seventh visit was a good one for Wycombe as we won promotion under Gary Waddock. The football was pretty good that year but it was Gavin McCallum who opened the scoring for Lincoln on 17 minutes. Wycombe had lots of chances but it was two goals from left-back Andy Sandell that sealed the win for Wycombe in front of a rather smaller away following of 212. 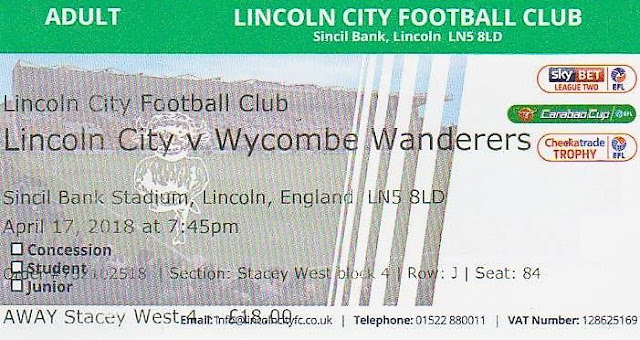 Continuing with my trend of going to Wycombe games at grounds, that I'd not been to for a while. Lincoln was pretty near the top of the list, as that was one of the cities that I fancied a look around. It was originally scheduled for Saturday 7th April but was moved to midweek due to Lincoln's participation in the Checkatrade Trophy Final. It was a bit annoying as it would mean a late night before having to get up at 4 am for work the following day. As per usual, I'd be going with the Independent Supporters Club as they picked up from right outside my house. I found out on Saturday what pub they were stopping at - The Centurion in North Hykeham and it didn't take my fancy. The cider list looked dreadful - the fact that they thought 'cider drinkers will be pleased to know that we sell Old Mout' said all you need to know. Not wanting to drink awful alcopops and knowing that Lincoln had a decent range of pubs, I did my research on public transport. I was pleased to find that I could get a bus for £2.60 into town, that if I couldn't get dropped off en-route. I did my research into pubs, finding three stops with a potential fourth should time allow. 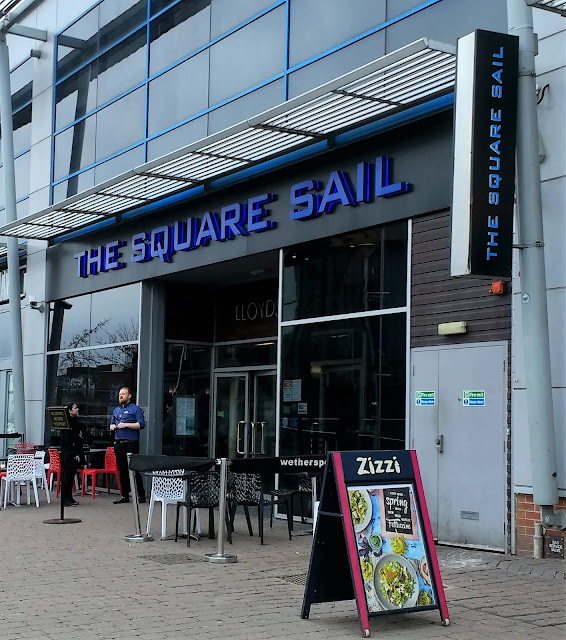 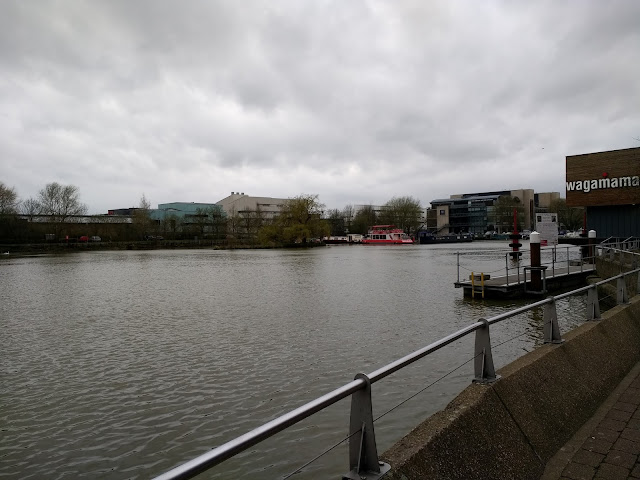 On the day of the game, it was my usual day off of work and so I had a decent night’s sleep for once. After getting ready I walked down town and bought a few things including a Chicken Dhansak for lunch. After coming home, I had an hour and a half to eat my lunch and relax. By the time 1.30 came around, I got my stuff together and left for the coach which went from just down the road. It was a fancy coach with USB charging points, which made a change. I was glad when my Dad offered to pay for my coach. It had been an expensive day in Yeovil on Saturday - over a day's wages doing an unpleasant job and the experience had been a poor one, despite the win. We got to the pub in North Hykeham just before 5 and then it was a dash across the road to the bus stop and a 15-minute wait for the bus. It was actually 45 minutes late due to an accident somewhere and that would have explained the two ambulances I saw rushing off towards the city. 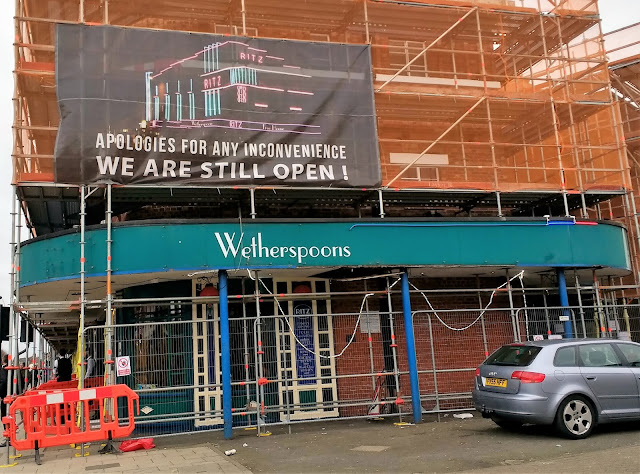 Despite delays, I was still at my first pitstop by 5.50. Wetherspoons 161 for me was the Square Sail in a nice location by a canal. Even so, I was pleased to get a pint of Cockeyed Pear Mania for a bargain £2.19 a pint. The next stop was Wetherspoons 162, The Ritz. A bit rough around the edges, but I procured one of my favourite ciders, Black Dragon for £3.09 a pint. I'd been hoping to eat here, but it was very busy and I was unable to procure a table. Time was getting on by now and with a lot of takeaways closed, my next stop was the Hop and Barley micropub. There I had a pint of Angels Leaf, a new one for me. About 80% of the takeaways in Lincoln seemed to be closed, but eventually, I found myself some Spring Rolls and chips at a place called Bamboo after walking back into town. They were ok, but not exceptional, but I only paid £3.60 and the portion size was good. From there, it was a short walk to the ground with me arriving at 7.30. For the second game in a row, the on-pitch action provided little excitement, but a goalless draw was a good point for Wycombe. It was a fair result too, the hosts having the better of the first half, but Wycombe doing better in the second. It was a fairly physical game and as a result, the game overran by 20 minutes. After getting back to the coach at 10, we were on our way. Looking at the league table, Wycombe’s future was uncertain with Exeter two points behind us, but we were at least, guaranteed a playoff place. It took ages to get home as there were four overnight road closures and we had to take a massively extended route on the coach. I did get a tiny bit of sleep, but not nearly enough. Eventually, I got home at 1.25, having a quick drink and heading straight to bed with me up in a couple of hours. It took me ages to get to sleep, so I was knackered the next morning, so I grabbed my usual afternoon nap. 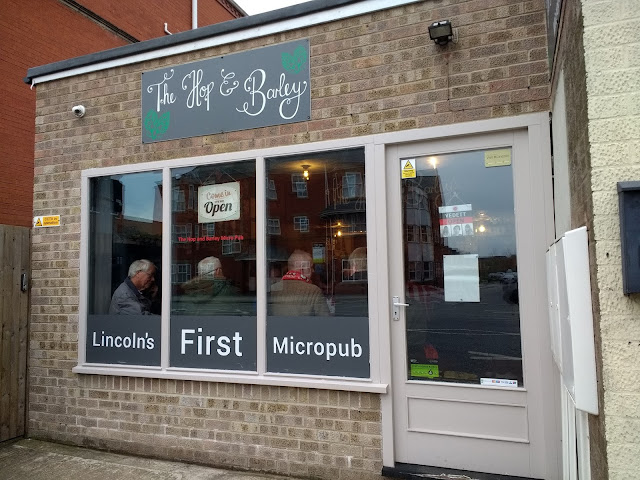 SINCIL BANK is a decent lower division ground, not too different to Adams Park in terms of capacity and facilities. The tea bar is a bit of a disappointment mind, the tempting sounding 'Lincolnshire Sausage Bap' is a dried out sausage in a stale roll. There's also a bar at the ground and although the range of drinks is poor, you can get some cracking baps in there. Not the bar maid's, but the ones filled with meat which are of a good size and delicious. The town is also close by and has many good establishments if you are a discerning drinker like me. Overall Lincoln is a nice place to visit. Though on a few occasions we have encountered the less savoury side of the Lincoln support, but it would be unfair to brand them all as the "Jeremy Kyle generation" as the good far outweighs the bad. 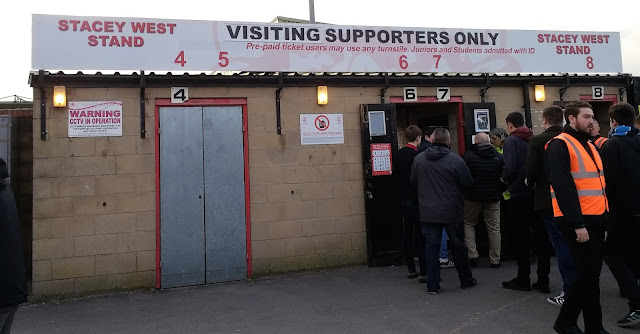 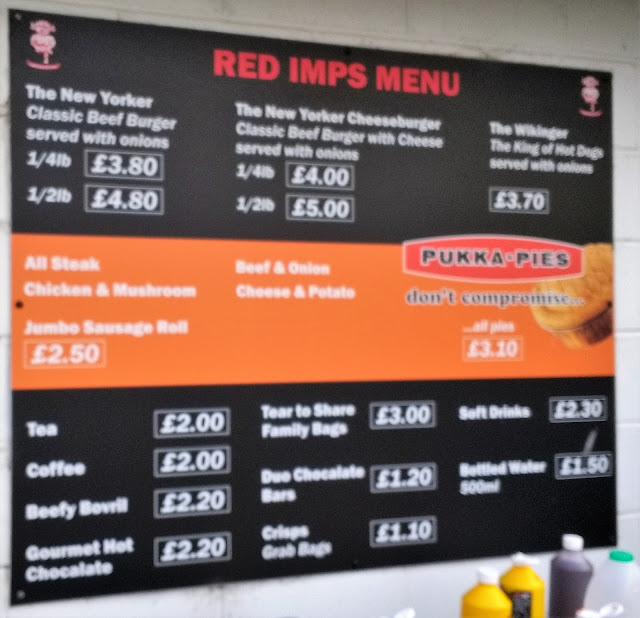 For most of our visits there, Wycombe fans have been given the right-hand section of the Lincolnshire Co-Op Stand, a large all seated stand that holds around 5500 fans. 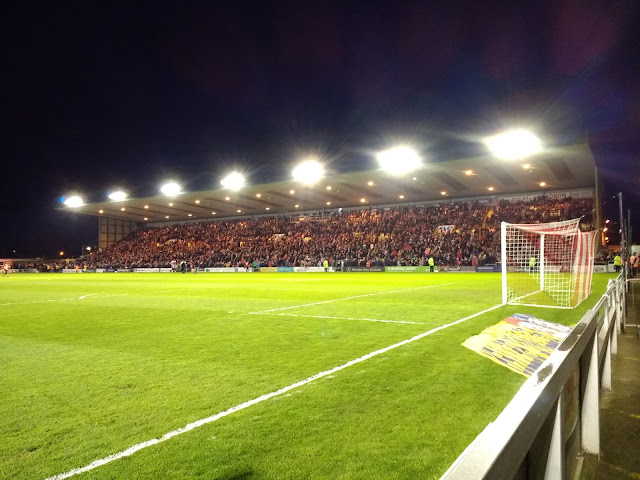 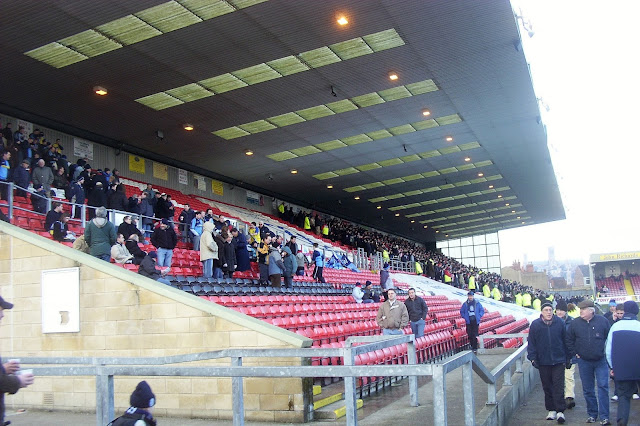 To the left is the Stacey West Stand, this seats around 2000 and was a former terrace. This is where 2500 Wycombe fans were located back in 1999, for the previously mentioned "great escape". In between my last two visits, this has reverted to being the stand for visiting supporters. 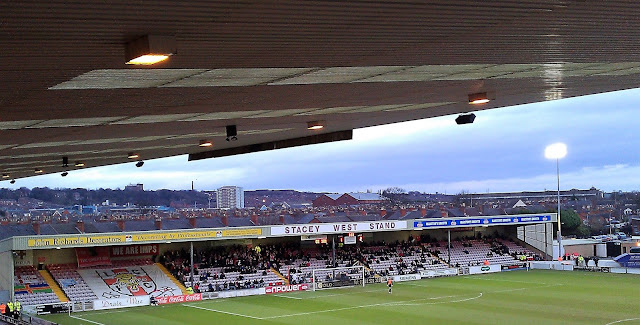 Opposite are 2 stands. My personal favourite in terms of looks - the Lincolnshire Echo Stand, seating around 1200. Next to it, a small family stand, which looks like the type you would find at a non-league club. It provides an extra 300 seats. 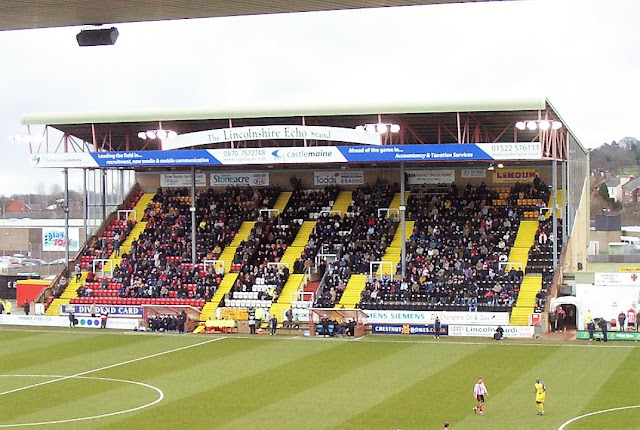 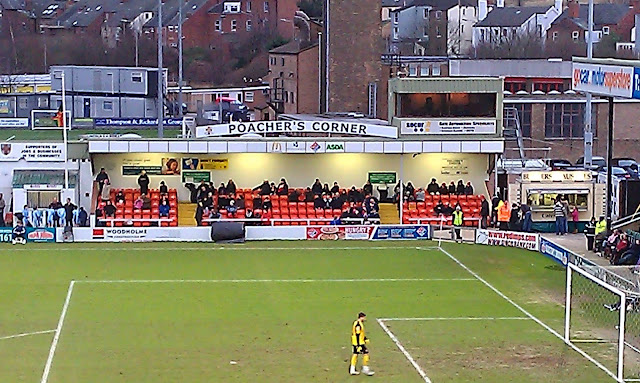 Finally, to the right, is the IMPS stand. Decked out in green seats, this holds about 800 fans and has a row of executive boxes behind it. 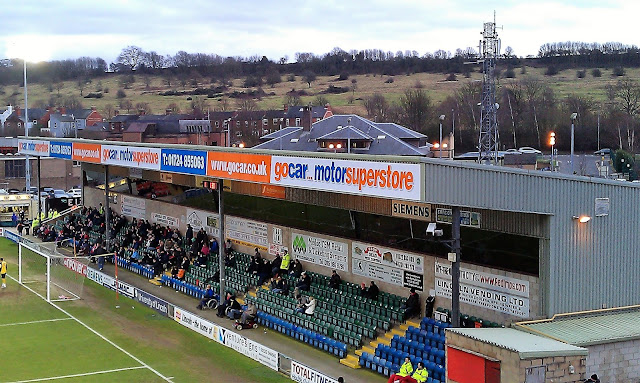