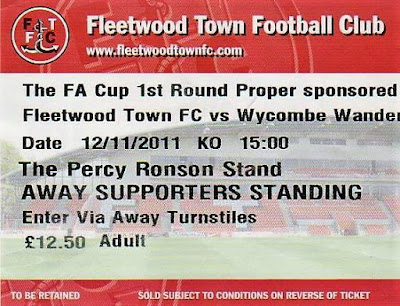 Though there were two previous incarnations of the club (1911-1976 & 1977-1996) the current one was only formed in 1997. Initially known as Fleetwood Wanderers, they changed their name to Fleetwood Freeport without playing a game thanks to a sponsorship deal. Initially starting in the North West Counties League, they won its second tier in 1999. It would take them another 6 years to gain their second promotion, by which time they were known as Fleetwood Town, following a name change in 2002. This kick-started a huge period of success, after a runners-up spot behind the NPL Division 1 behind Mossley in 2005/06 season saw the club promoted to the Premier Division. It would take until 2007/08 for Fleetwood to be promoted again, this time as champions, to the Conference North. Again it would take a couple of seasons for another promotion, the 2009-10 season would see a 2nd place finish and the playoffs. Victories over Droylsden & Alfreton Town would see a promotion to the Conference Premier. Despite a 5th place finish, a heavy 8-1 aggregate defeat to AFC Wimbledon in the playoff semi-finals meant that the club would have to wait until 2012 for promotion but they'd more than make up for it, finishing with 103 points, 5 points ahead of their nearest challenger. 2013/14 would see a 4th place finish in League 2 and victories over York City & Burton Albion in the playoffs would see them promoted to League 1 where they remain to this day. A 4th place finish in 2017 is their best effort so far, with Fleetwood being denied promotion by Bradford City who beat them in the playoff semi-finals.

In the FA Cup, the best progress has been to the 3rd Round, a feat achieved on three occasions. After six straight League Cup exits at the first hurdle, Fleetwood Town finally progressed beyond the 1st Round this season, with a victory on penalties over Carlisle United, their reward a game at Leicester City which they lost 4-0. Little success was enjoyed in the FA Trophy with a 2nd Round defeat to Dover Athletic in 2009 being the best they could muster. Though a previous incarnation of the club reached the FA Vase in 1985, the best the current club could do was the 4th Round. The 2002-03 season saw them beat Alsager Town, Nantwich Town, Thornaby & Abbey Hey were beaten before a 3-1 defeat at Brigg Town. In the now maligned Football League Trophy, Fleetwood Town reached the area final in 2014, losing to Chesterfield over two legs. Local Cup wins include the North West Counties 1st Division Cup in 1999, the NPL Challenge Cup in 2007 and the Peter Swales Trophy in 2008.

Records for the club include a 13-0 win over Oldham Town in 1998, whilst the record attendance of 5,123 came for a game against local rivals Blackpool in April 2016. Record appearance holder for the club is Nathan Pond with 498 prior to joining Salford City earlier this year. Right back Connor McLaughlin earned 25 international caps for Northern Ireland whilst at the club prior to his transfer to Millwall last year. Record purchase was Jamille Matt from Kidderminster Harriers for £300,000 in January 2013 whilst the £1,700000 received from Leicester City in May 2012 remains a record for a non-league side. The town of Fleetwood itself has a population of just under 26,000 with fish production being one of the main contributors to its economy, despite its decline from around 1960 onwards. The town's biggest employer is Lofthouse who make the Lozenge 'Fisherman's Friend'. Famous people from the town include Peter Hesketh-Fleetwood, the MP, landowner and developer who the town is named after and comedian Syd Little who formed a comedy duo with Eddie Large called 'Little & Large'

I was delighted when Wycombe were drawn away at Fleetwood in the FA Cup 1st Round, as I had not yet seen a game there. I had made an attempt before to see a game, I was staying up in Blackpool for the Easter weekend as Wycombe had a game up at Morecambe on Saturday. I went up on the Good Friday with friends Paul & Sue and was planning to go to Fleetwood Town v Prescot Cables in the NPL Premier. The hosts won 3-1 in front of a crowd of 681 which sadly didn't include me. Despite leaving around 9 am and leaving plenty of time to check in at our B&B, a long delay on the M6 at the usual bad point of Stoke. In the end, we only got to Blackpool around kick off time which was very annoying. These days, I'd have alternate plans in place but I wasn't such a committed groundhopper back then. I did at least go back and get pictures on the following Sunday and was glad that I did as the ground changed a lot prior to my next visit. 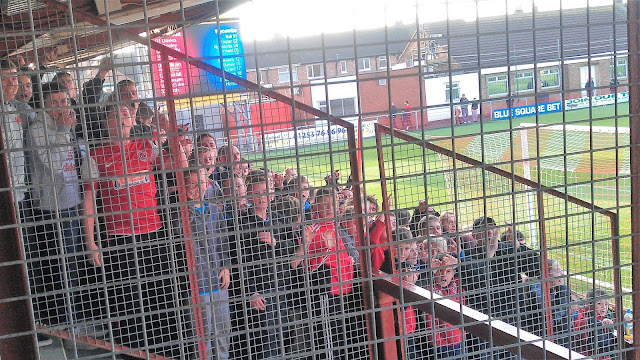 The game that Wycombe was going to play up there was tagged as a potential giant-killing, but thankfully the kick-off time was not moved to accommodate TV coverage. I had to work before making my way to the game, so after 4 hours toiling, I set off for Fleetwood at 9am and after a shockingly hassle-free journey, I got to Fleetwood just before 1, seeing former Wycombe striker Magno Silva Viera in the car behind on the way to the ground. After a look around their town, I made my way to the previously recommended Strawberry Gardens pub And it turned out to be excellent. 4 real ciders, I very much enjoyed my Berry Cider and my Cheddar Valley cider. If there were more pubs like this, where some imagination went into the drinks they served, then I am certain not so many would be closing down. After the pub, the Highbury Chippy, right outside the ground was excellent too. Steak Pudding, Mushy Peas and Chips were just what I needed to soak up those 2 pints. I also bought a pennant from the club shop at a very reasonable £2.50. 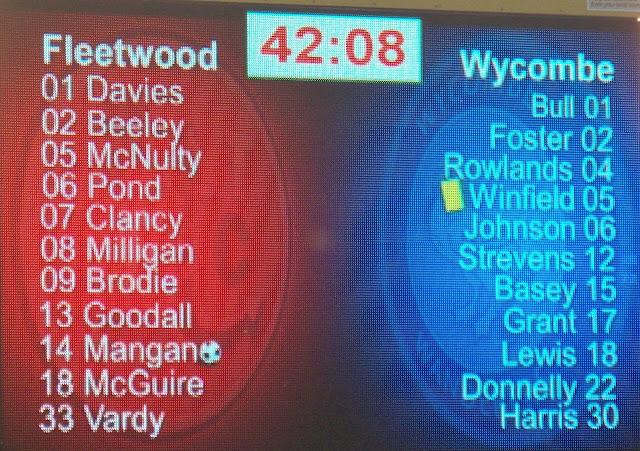 As for the game itself, the less said about it, the better. Wycombe were dire, as they have been on several occasions this season. Fair play to Fleetwood though, they were excellent and fully deserved their result, and would have given Wycombe at their best a good game. The Cod Army completely dominated the game and fully deserved the result. Richard Brodie had already hit the bar when former Accrington striker Andy Mangan put Fleetwood ahead. Brodie was then sent off just after the half-hour mark, for an elbow on Leon Johnson. Despite having the man advantage, it didn't get much better for Wycombe. We had a couple of quarter (less than half) chances but nothing came of it. And it was no shock and fully deserved when Jamie Vardy put the home side 2-0 up. Fleetwood had already hit the woodwork a couple more times before the goal and it wouldn't have been hard on Wycombe if they had repeated their 5-0 victory over Mansfield in the last round, this time out. 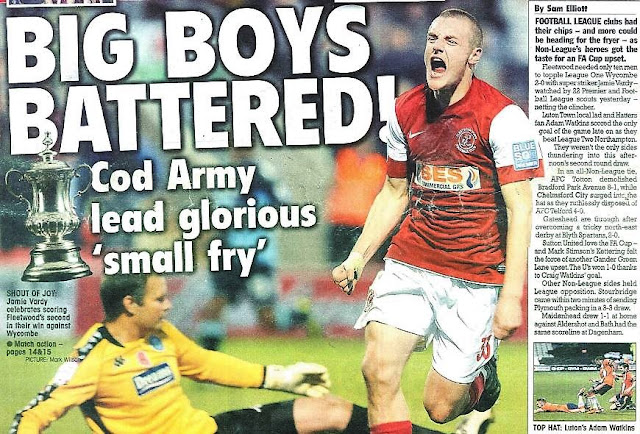 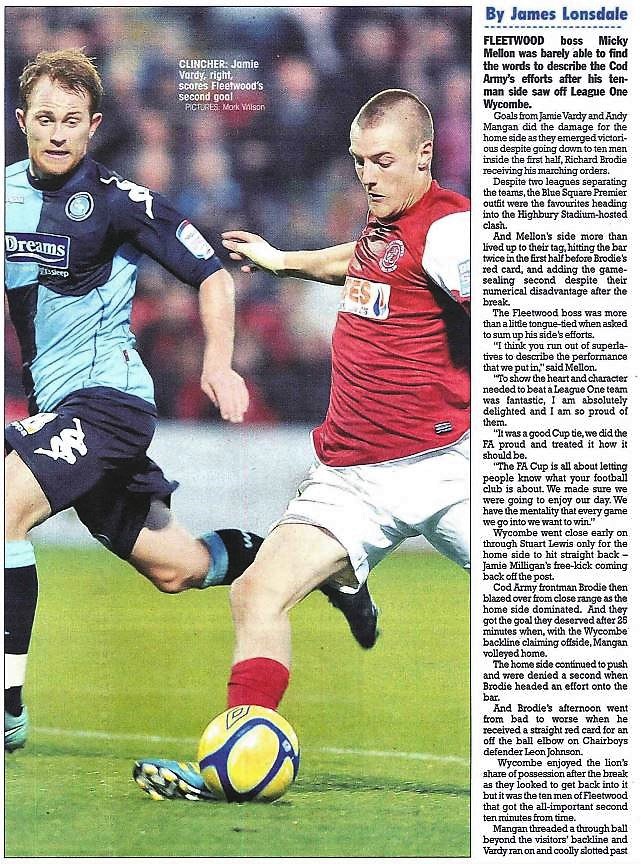 So, a truly awful display by Wycombe, even if it was against a decent Fleetwood side. Little did we know at that time that Jamie Vardy's career would be such a success with him being capped and scoring for England. Jordan Ibe would also come on as a sub for Wycombe and he made a multi-million-pound move of his own to Liverpool. After the game, I popped into the local shop and was happy to find that they did fiery Irn-Bru, which I had been meaning to try for ages. I got home just after 9pm, and had a couple of much-needed cans before bed, as I was up early for work again.

HIGHBURY is a smart and modern ground and has seen significant redevelopment since my first visit in 2008. Pride of place goes to the Main Stand, built around 2010 which holds 2,000. On the opposite side is a smaller stand, this holds just shy of 700. The remainder of the 5,372 capacity is covered terracing. Away fans are given the Percy Ronson Terrace and this is the only remaining stand from my first visit. Visiting fans are also allocated a block of the large main stand.

The food in the ground is the usual dull football fare along with the usual price hikes. The club shop is very good though, at least it was when I went for the FA Cup game. Though there were no old programmes, there was a great range of merchandise at reasonable prices. Outside, the Highbury Chippy provides a good meal for a fair price. There's an excellent pub near the ground, The Strawberry Gardens is a few minutes walk away and does good food, real ales and ciders as well as bottled Belgian Beers. Alternative pubs are available and there is a Wetherspoons in the town centre. 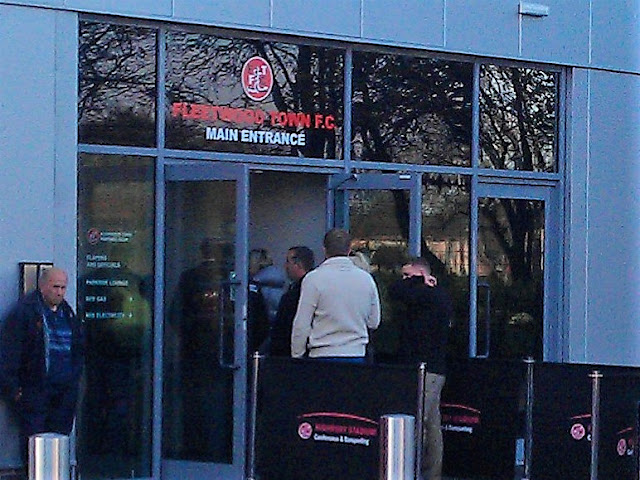 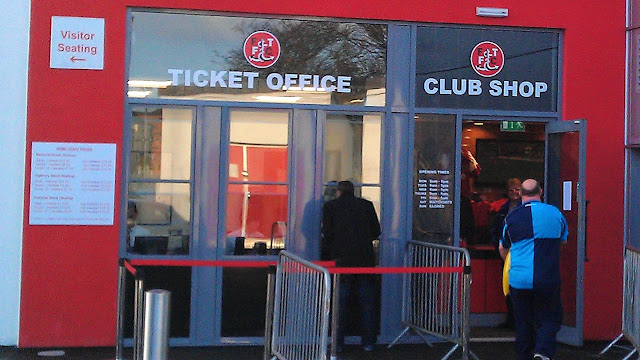 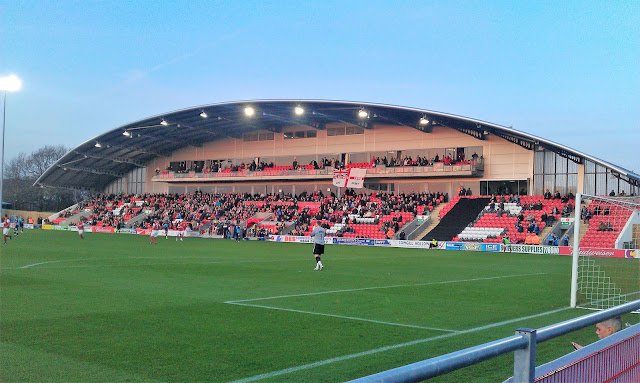 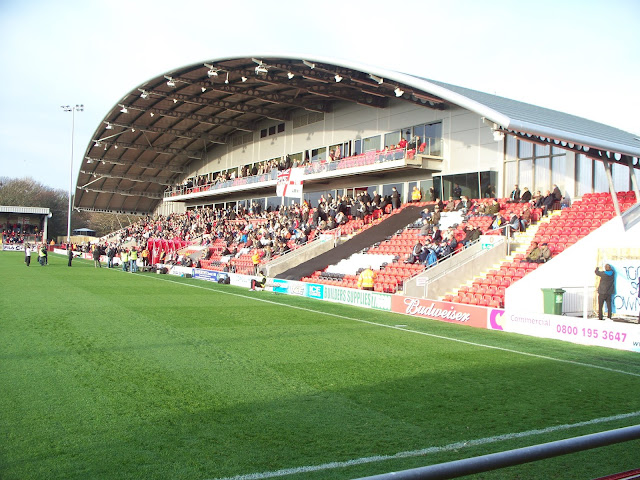 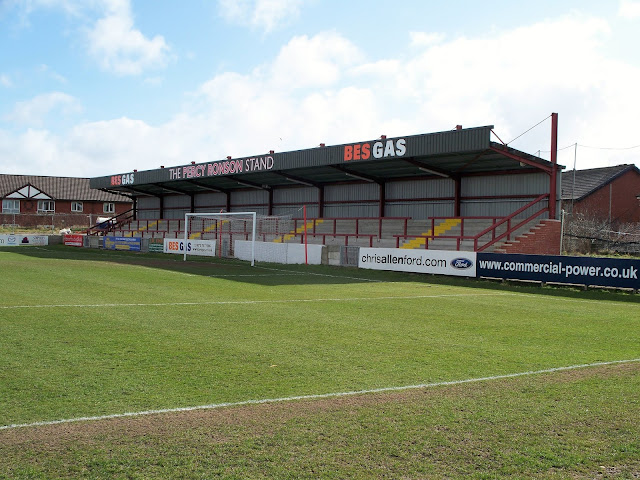 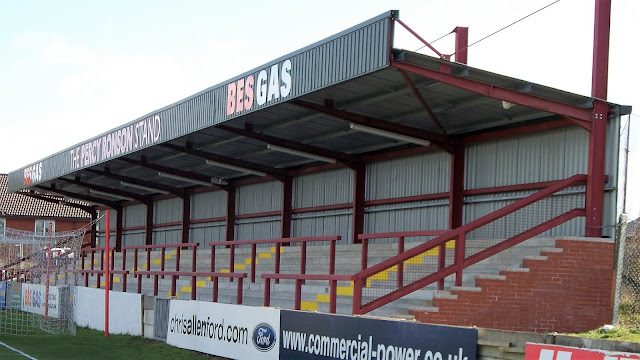 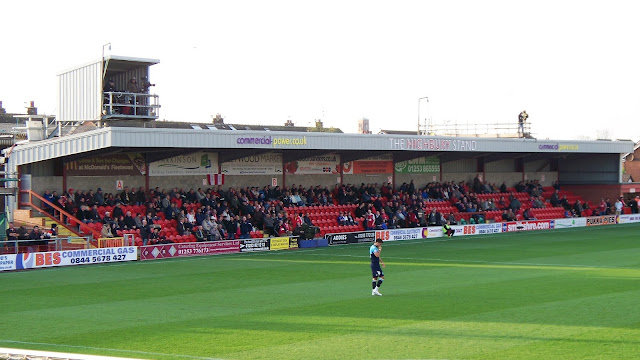 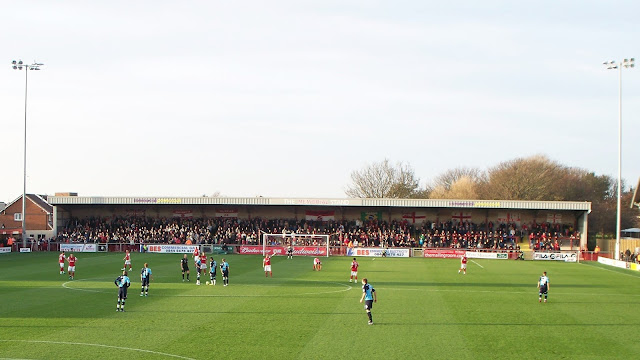 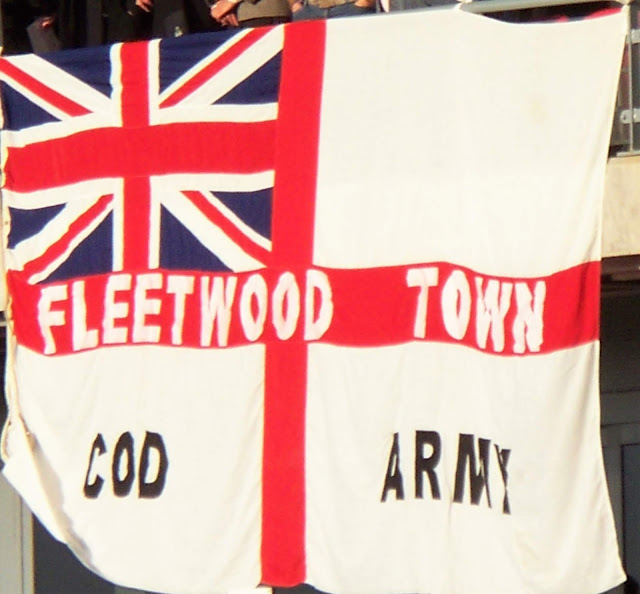 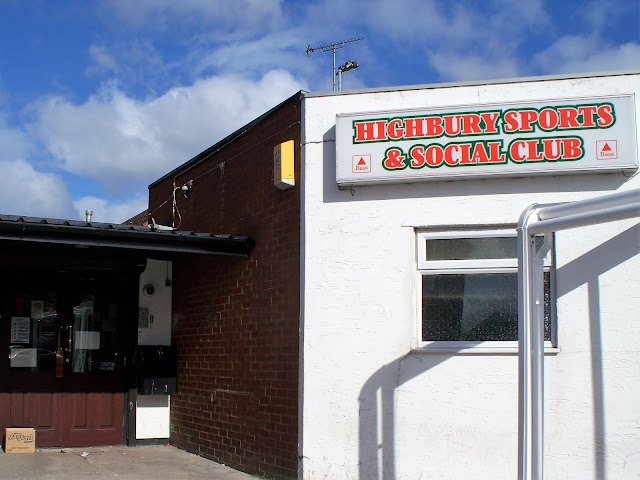 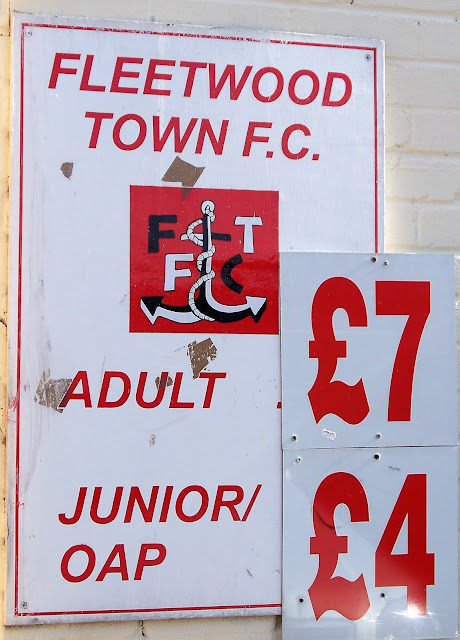 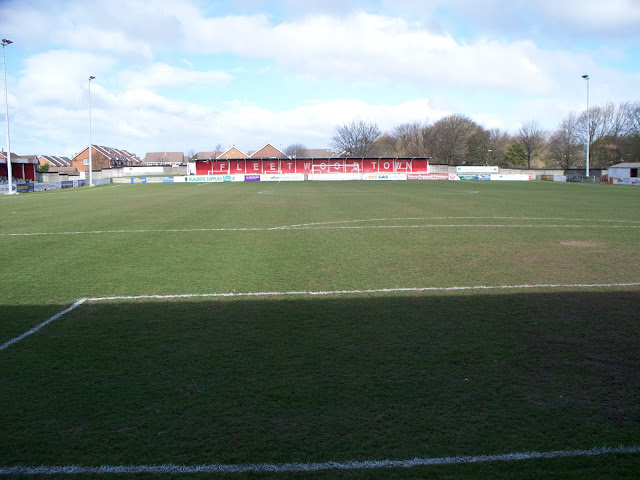 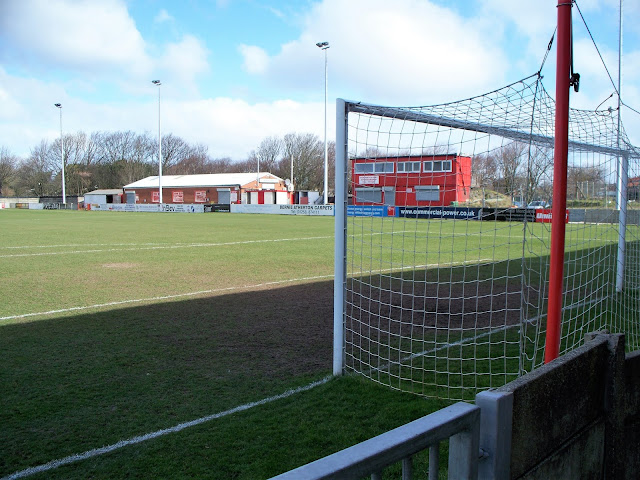 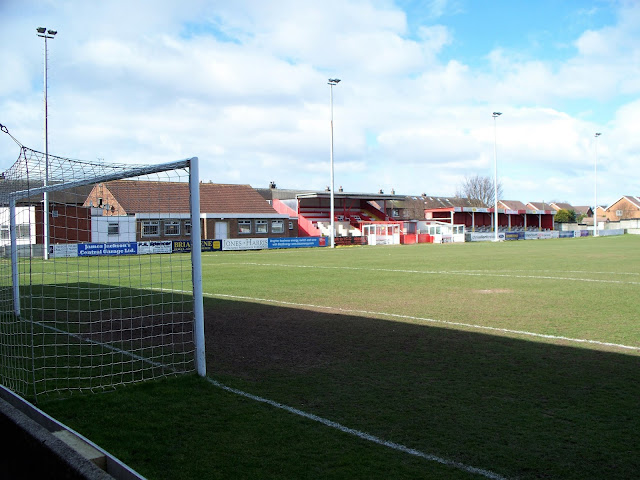 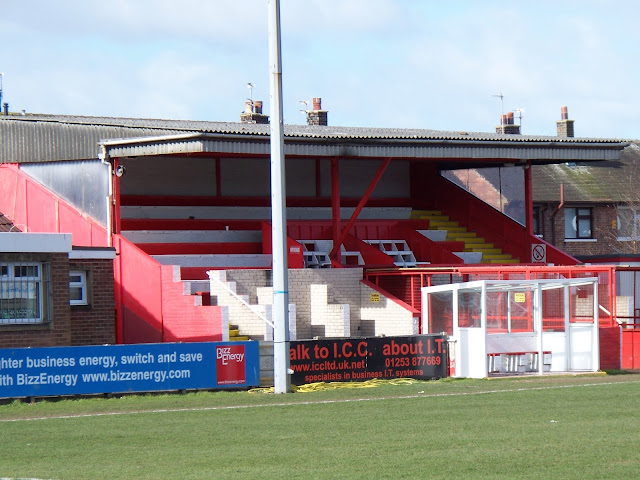 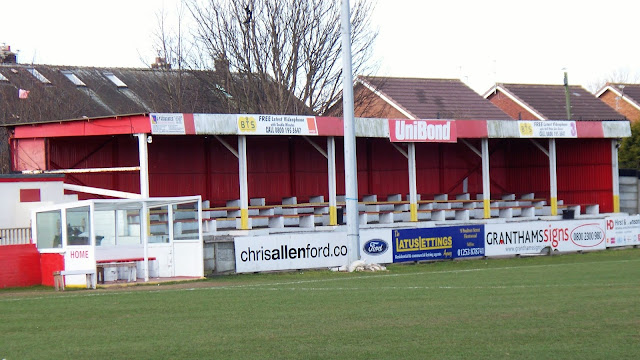