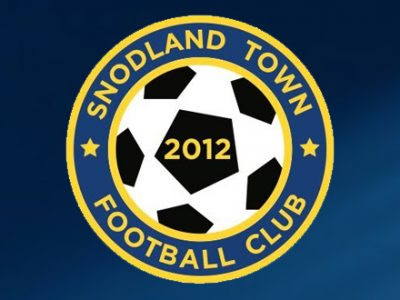 Snodland Town FC
Pontyns Sports Ground
Paddlesworth Road
Snodland
Kent
ME6 5DP
07999 457864 (secretary)
Official Website
Facebook
Twitter
Ground Number: 979
Saturday 31st July 2021
Snodland Town 4-1 Westside
SCEFL D1
SNODLAND TOWN FC - A BRIEF HISTORY
The club was established in 1948 as a boys club called Snodland Nomads. They progressed into men's football in 1956, changing their name to Snodland FC. The town suffix was added in 2012 and they also bought the Nomads name back for their junior teams. Up until 1992, they played in local leagues such as the Maidstone & District and Rochester & District. They played far more and were more successful in the former and won several titles. These include the Premier Division in 1960 and 1984, Division 1 in 1974, Division 2A in 1958 and Division 3B in 1957. They joined the Kent County League in 1992. They were runners-up in Divison 2 West in 1995 and Division 2 West champions in 1996. The upward progress continued with the club taking the Division 1 West title in 1998 and the Premier Division title in 2000. In 2003, they finished bottom of the league but were not relegated They remained in the division until 2016 when they finished 3rd behind Faversham Strike Fores and Kennington. They were then elected to the SCEFL Division 1, where they remain to this day. Their best finish of 6th came in 2018.
Snodland Town have not yet entered the FA Cup but they have played four seasons in the FA Vase. Their best progress came in 2019 when they beat Kent Football United 1-0 and Bridon Ropes 3-2 before a 5-1 defeat to Sutton Common Rovers in the 1st Round. In local cups, wins include the Kent Junior Cup in 1962, the Rochester & District Quarter Centenary Cup in 1964, the Sittingbourne & Milton Charity Cup in 1984, the Maidstone & District Challenge Cup in 1984 and the Bill Manklow Cup in 2001. The small town of Snodland is located near Tonbridge in Kent and has a population of just over 10,000. Lime working has been the town's main industry in the past but nowadays it is the home of the offices of South East Water. The town is twinned with  Moyeuvre-Grande near Metz in France and has had its own railway station since 1856. There's also a cricket club in the town. The white reggae singer Judge Dread (real name Alex Hughes, 1945–98) lived in Snodland. Alex Hughes Close is now named after him. Several Judge Dread songs refer to Snodland, such as "Belle of Snodland Town" and "Last Tango in Snodland".
MY VISIT
After doing a lot of driving recently, I was keen to do a game on the train this Saturday. I was glad that competitive football was back and was keen to take in a league game. There were a fair few options that I could use my railcard for but I narrowed it down to a final two of Worthing United and Snodland Town. In the end, I opted for the latter as it was a tenner cheaper and I'd had a pricey time lately. I planned in a stop at Strood as there wasn't a great deal of choice in Snodland itself. I had to change train there anyway, so it worked out well. I did my club research on Thursday, some that I enjoy. I found out that Judge Dread came from Snodland, a music artist with who I was vaguely familiar. I decided that it would be my pre-match music on Saturday, should I remember. I revisited Hanwell Town on Friday night as they had a friendly against Wycombe. It was my third visit to the ground closest to where I was born and a thoroughly decent night was had. I met several familiar faces and saw a team of Wycombe trialists triumph 3-1. 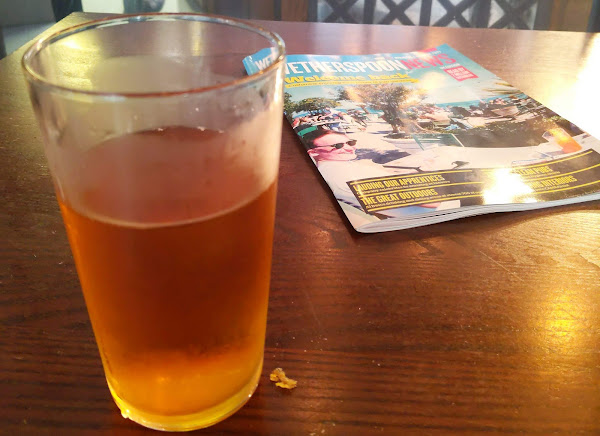 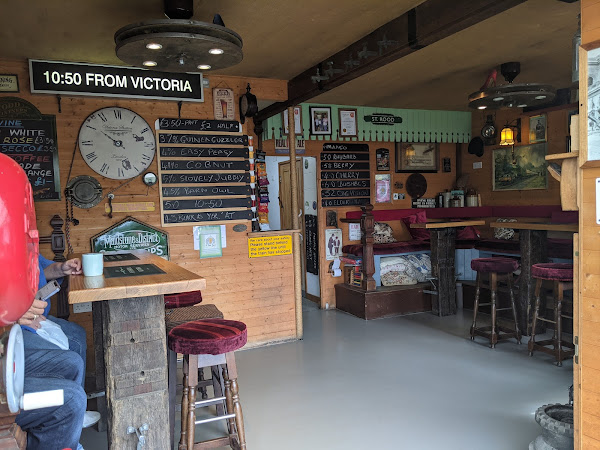 On the day of the game, I awoke early at around 6.30, having had around 6 hours of sleep. This wasn't the greatest amount but was better than the last two nights. I got dressed and had a quick breakfast before leaving at 8.30. It was a pleasant walk down town and I got to the station an hour later. I checked on Twitter to see if there were any problems with the game before getting my return ticket. It was £21.30 thanks to my railcard. My pre-match plans meant that I could divert to Bearsted if there was a call off more than two hours before the game. It was a nice smooth journey with me getting to Marylebone, walking to Baker Street and getting the Metropolitan Line to King's Cross. I had time to kill so I had a swift pint of Gwynt Y Ddraig Black Dragon at the Barrel Vault Wetherspoons at St Pancras. It was then a short walk to platform 11 for my high-speed train to Strood. My pre-match soundtrack had been the Kent Non-League podcast and Judge Dread as I tried to absorb the local culture as much as possible. 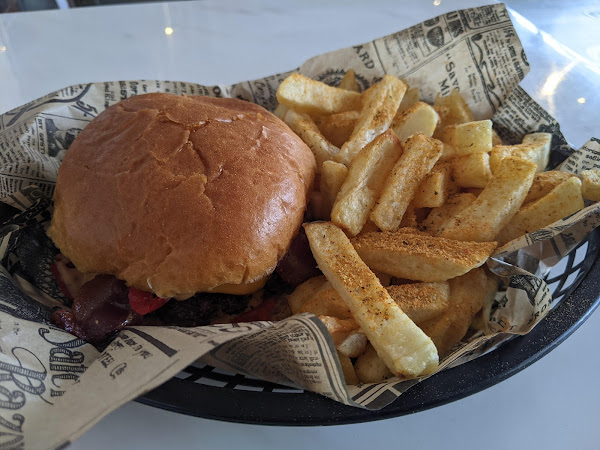 I was at Strood by 11.58. It was around ten minutes walk to The 10.50 From Victoria Micropub. Ciders on offer were mainly silly fruit ones but I did manage to have a pint of One Vision cider from the Double Vision brewery. It was a sensible strength at 5.2% and was brewed locally in Maidstone. From there it was a walk to Wills Fish and Grill for a double Smokin Gun burger with Peri-Peri fries. It was fairly decent but pricey, but it's good to treat yourself now and again. Moderation was the name of the game as I didn't bother stopping at the Steam Packet pub for a pint. Instead, I got the 13.34 train to Snodland which arrived ten minutes later. It was just under 20 minutes to the ground where I paid £5 to get in, plus £2 for a printed programme. I probably could have got a digital copy for free, but it was nice to help out the club. For the same reason, I got myself a Strongbow Dark Fruits for £2.50. It was twice the shop price, but an important purchase to help keep clubs going. It had been a sensible pre-match, unlike my previous venture to Kent. Herne Bay turned into a bit of a blur as there were far too many good pubs in the area. The weather took a turn for the worse before the game, so I sheltered in the stand before the game. 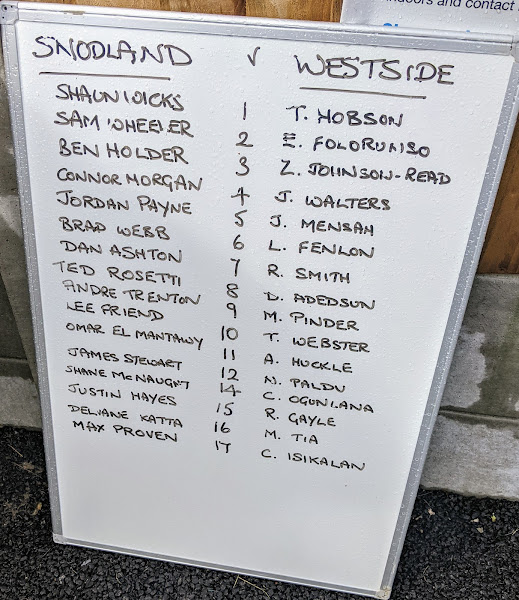 Despite the programme and corner flag colours, Snodland started in all white with Westside in all blue. The visitors were actually the better side early on and they had a shot just over on 8 minutes. The pitch had a significant slope with Westside playing downhill in the first half. They took the lead on 11 minutes with a great shot from 20 yards. Snodland were level a minute later, a well-worked move and a good finish from 15 yards by Omar El Mantawy. They were ahead on 19 minutes, Lee Friend capitalising on hesitancy from the visiting defence to shoot home on the turn from just inside the area. Friend was having a great game, piling on the pressure with Snodland hitting the bar on 25 and 30 minutes. On 36 minutes it was 3-1, a good sweeping move from ten yards for Friend's second. The game died down after this with the hosts confirming their win on 82 minutes. Friend completed his hat trick, heading home and excellent cross. I made a hasty exit after the game, it was just under 20 minutes to the station. I made the 5.15 train to Strood by ten minutes, which saved another hour wait. 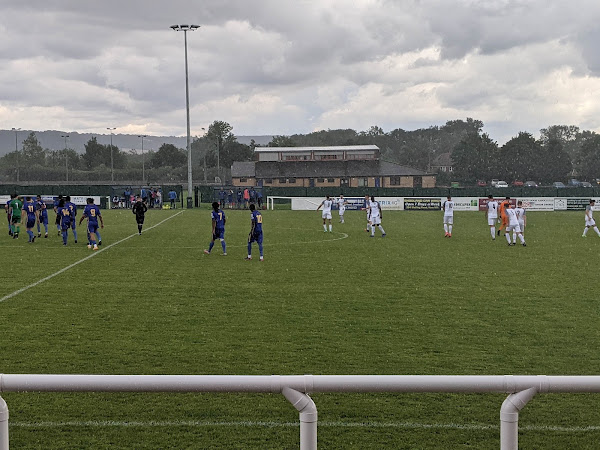 THE GROUND
PONTYNS FIELD is a basic venue but it does the job. There is just one stand and area of cover, this holds around 100 seated. The rest of the ground is open. There's a smart clubhouse with a basic range of drinks. There's also a tea bar. The town is about 10 minutes away and has a train station. There's plenty of parking at the ground. 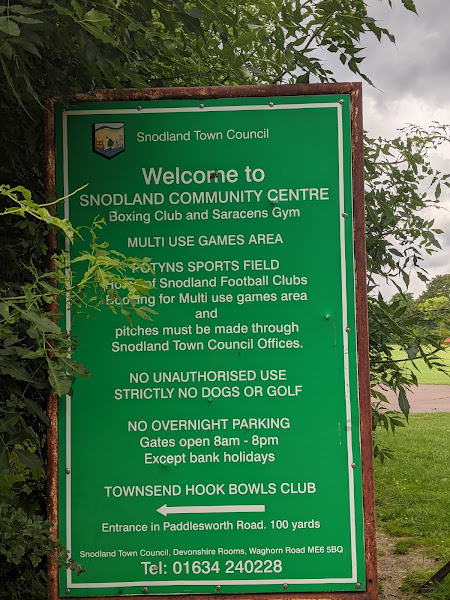 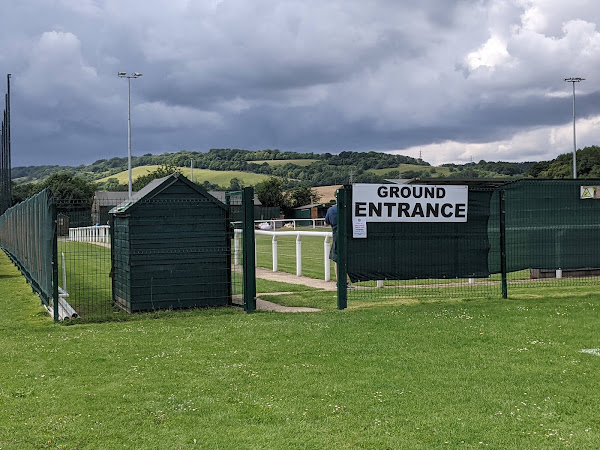 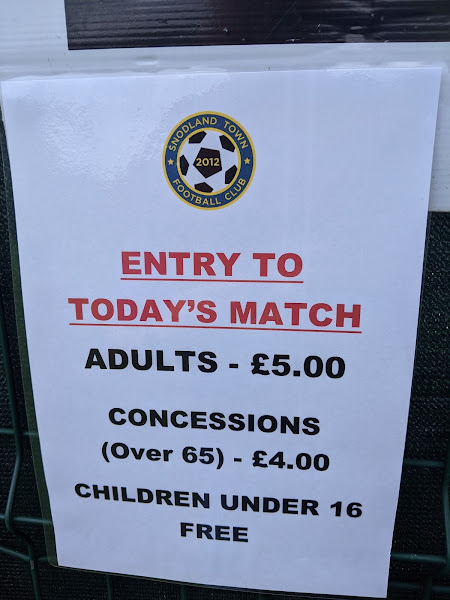 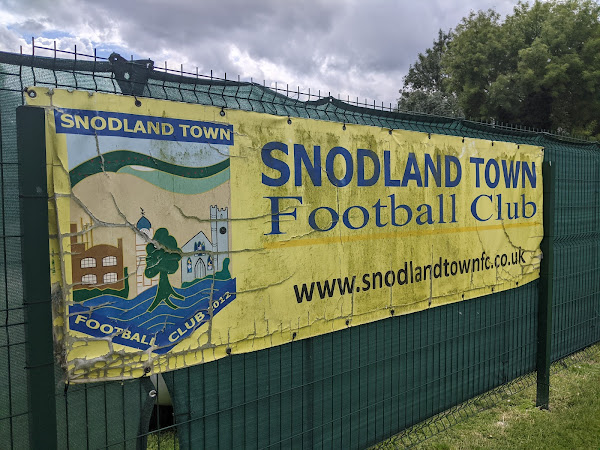 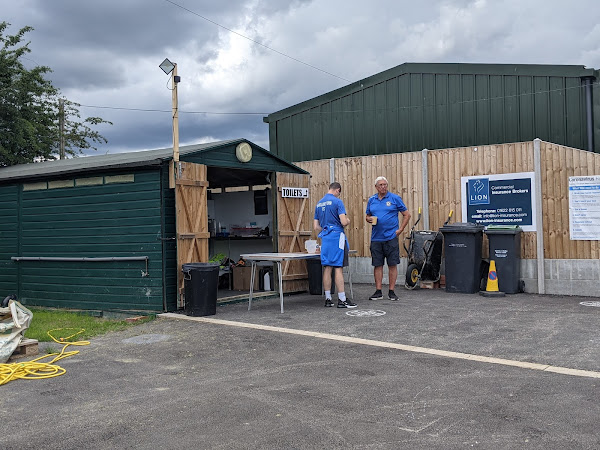 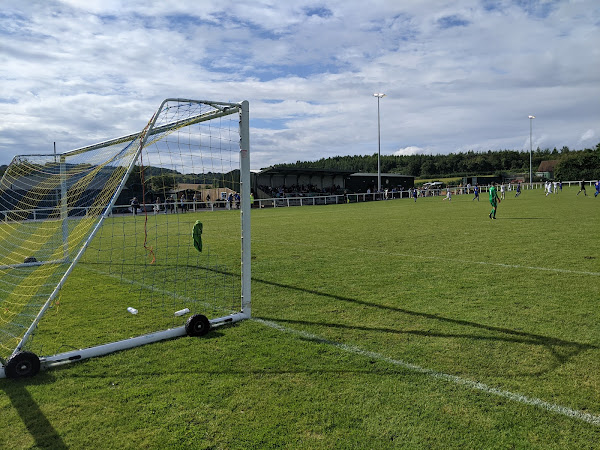 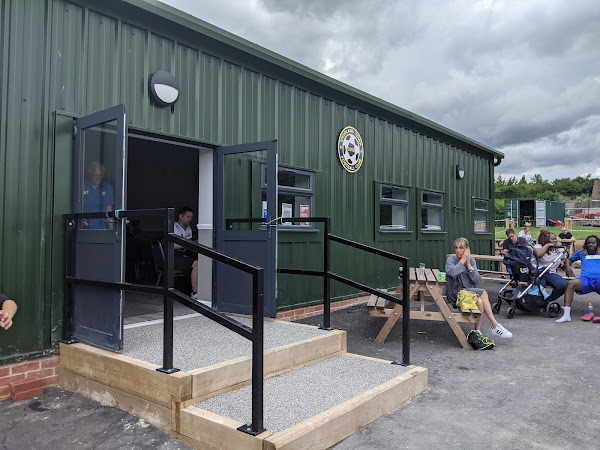 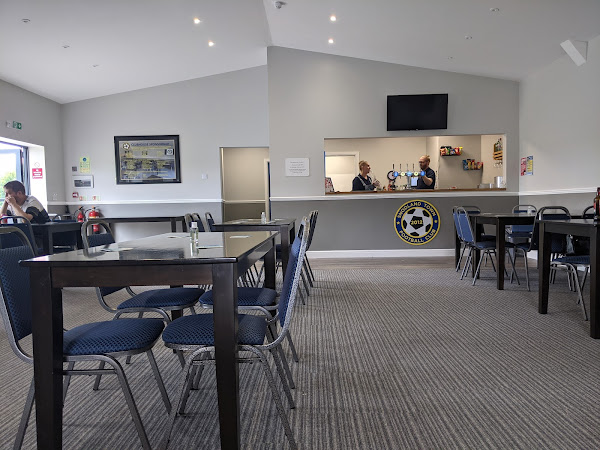 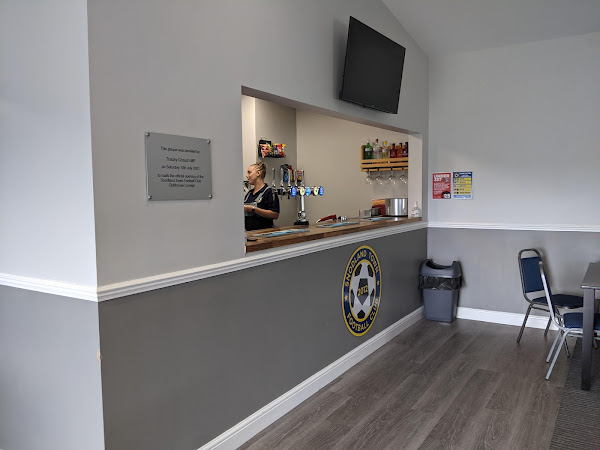 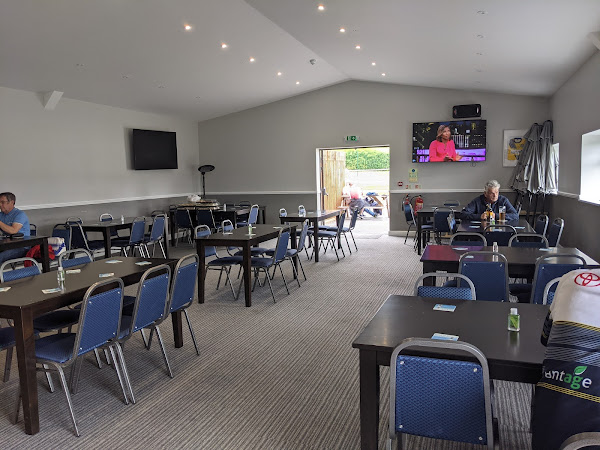 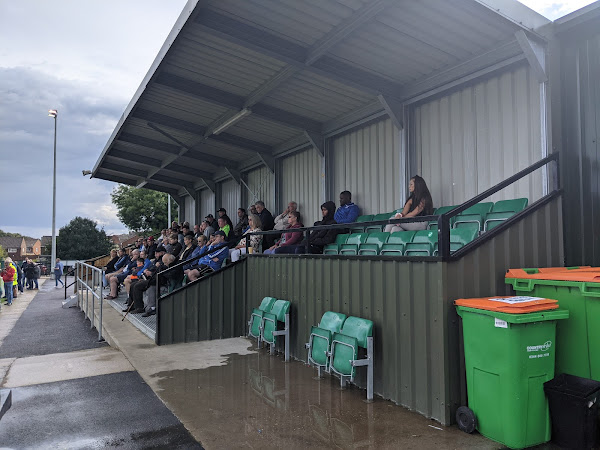 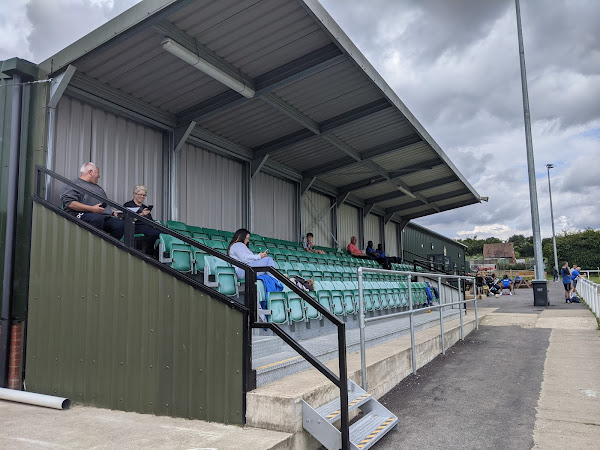 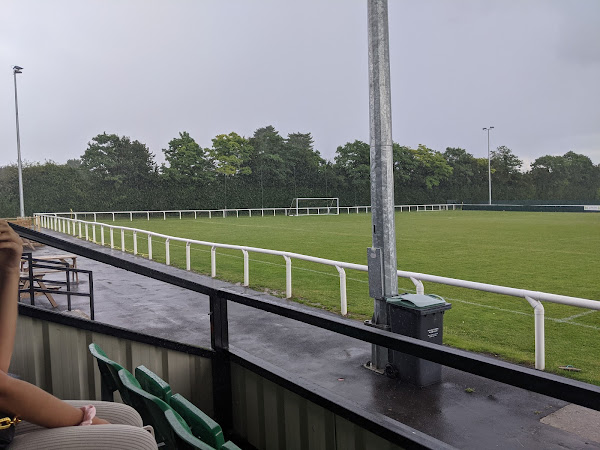 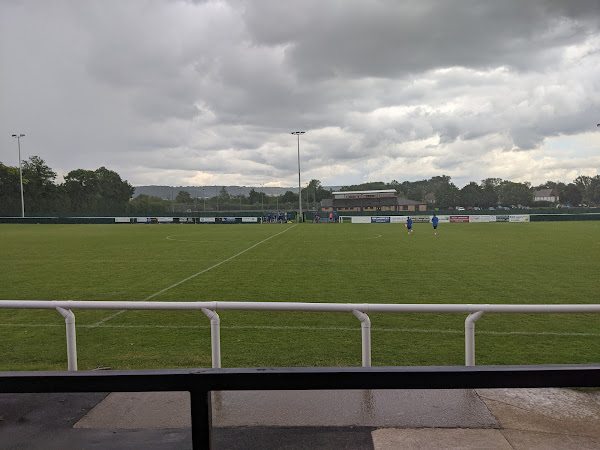 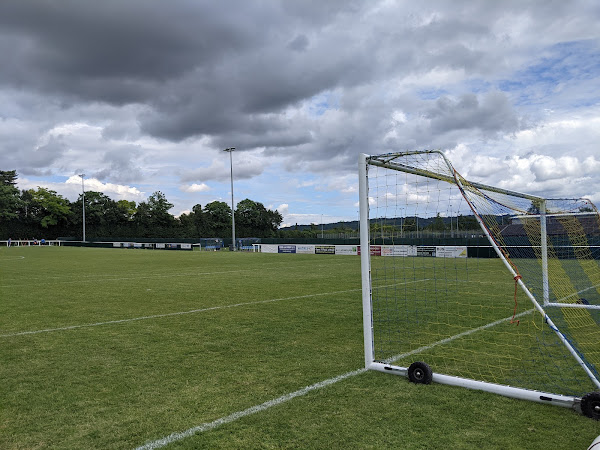 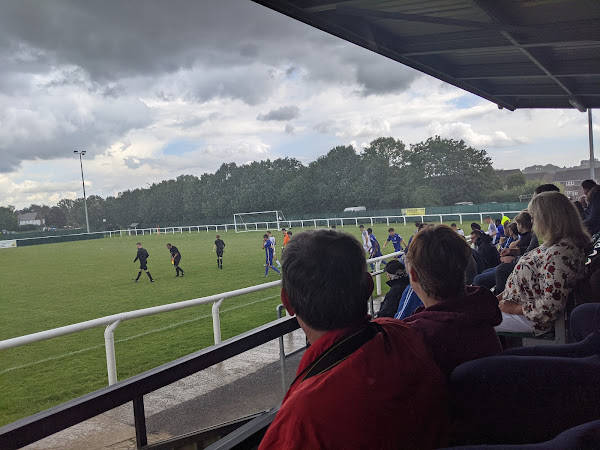 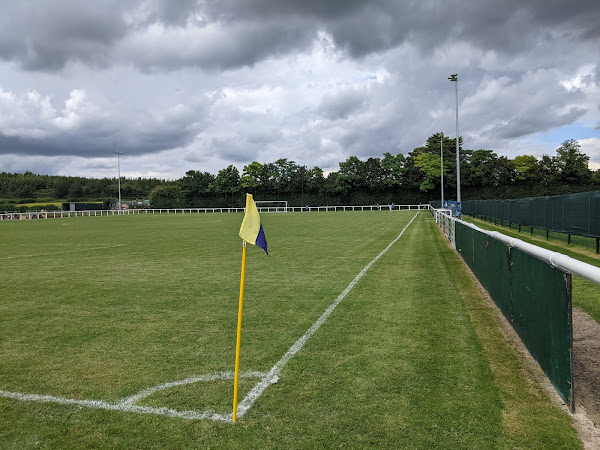