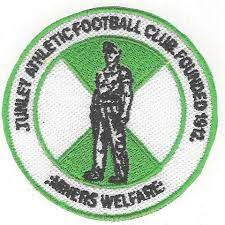 TUNLEY ATHLETIC - A VERY BRIEF HISTORY
Like many clubs at this level, information is very scant on the club. They were formed in 1912 and have links to the local Miners Welfare club. After playing in local leagues, they joined the Somerset County League in 1985. In 1990, they enjoyed their best-ever finish of 9th in Division 1. The mid-1990s saw a decline in results and they were relegated to Division 2 in 1992 and Division 3 in 1996. Five years were spent in the bottom tier before they won promotion back as runners-up in 2001, then again in 2003 as they finished in 3rd place in Division 2. They repeated their best-ever finish of 9th in the step 8 Division 1 in 2005. Results again declined and Tunley were relegated back to Division 2 East in 2008. A further relegation followed in 2018 after years of disappointing finishes. Last season was wiped from the record books and this season has seen the disappointing form continue with them winless in the 8 games played so far. Tunley is part of the small village of Camerton. It's situated 6 miles southwest of Bath and has a population of just 655. 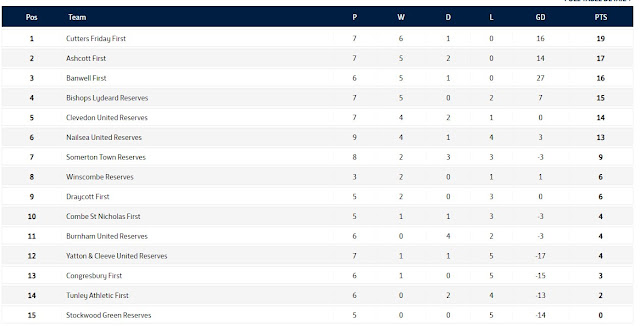 MY VISIT
It's always great to get a double in, but very few opportunities come up, even less so in these times of restrictions. There were possibilities in both Suffolk and Essex, but even then, it was not clear if fans were allowed. Another opportunity arose in the west and so I was hoping for Shrewton United and Trowbridge Town. However, these two were soon dismissed with the latter not being allowed fans and the former switching venue. This opened up a new opportunity - Frome Collegians was a decent railed pitch, but I needed a double. After much searching, I found another in Tunley Athletic v Peasedown Miners Welfare which was being billed as a Miner's Derby. It was another decent venue but would probably mean missing the first ten minutes or so of the game. With it being a long journey though, I decided it was worth the sacrifice, especially when I got both of my two hopping partners on board. We left our first game at Frome Collegians just after 2.45 and had a decent journey over. After parking up, we got to the ground six minutes into the game. It was another great area and there was also a small covered area on one side. Happily, no goals had been scored when we got there. 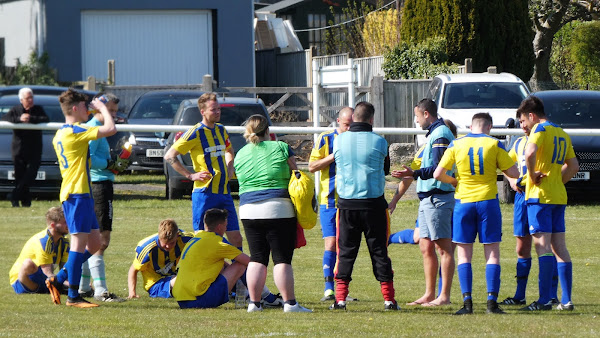 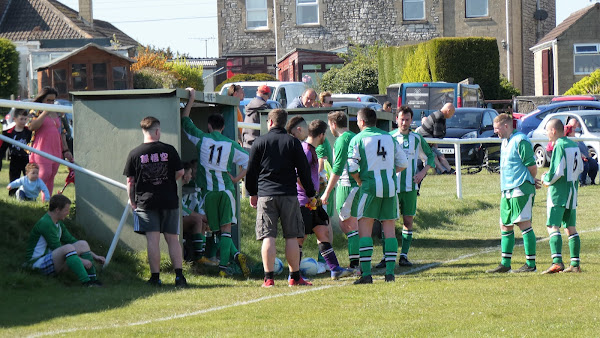 Tunley Athletic were in poor form, having not won in seven games. Their latest result had been a 4-0 defeat at home to Glastonbury last Saturday in this competition. Peasedown Miners Welfare sat a division above and were in far better form - they'd won four, drawn three and lost two of their games in the curtailed league season. Their game last week against Radstock Town Reserves had been abandoned due to a injury player injury meaning their last competitive game was a 5-1 win over Castle Cary on 12th December. After 9 minutes, the game went according to the formbook, a good run and shot by the Peasedown #10 was parried by the home keeper but the rebound was put into the net to make it 1-0. The glovesman had a busy afternoon and made loads of great saves. Sadly on 25 minutes, it was 2-0, down to a keeper miskick straight to an opponent. The visitors continued to dominate and hit the right-hand post from a tight angle. Tunley forced a good save from the visiting keeper just before half time but it had been all one day traffic in the first period. The game was over as a contest on 47 minutes when a cross-field ball was slotted home from close range. It got worse for the hosts a minute later, they had plenty of opportunities to close down the move, but after a number of passes, the ball was poked home from a yard out. The visitors got a 5th later on after more hesitation in defence. A deserved win for Peasedown Miners Welfare then, but the hosts never let their heads drop and kept playing for their team. It had been a nice afternoon to watch a game for the 45 in attendance. 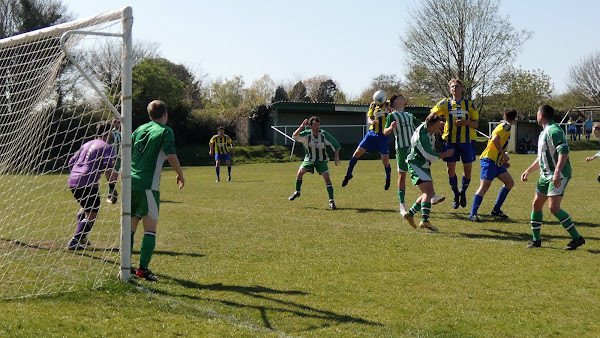 There was disappointing news for us as we left, Wycombe had lost 2-1 at Cardiff and were all but relegated. In truth, it's been a lost cause for a while but overall it's been a season the team can be proud that they gave their all. Hopefully, lessons will be learned, it was a slow start with us taking seven games to get our first point and we were far too conservative until it was too late. We left at 5, and I stopped at a Co-Op so that Colin could get some snacks. It drew a blank for local cider sadly, probably one of the worst stores I've been to, no bigger than a broom cupboard. We also stopped for petrol before we left and made slow progress through Bath. It was a lovely city when I went there on foot, but not great to drive through. The pavement cafes and pubs were packed with people enjoying the sun although it all appeared safe. The Bluetooth on my car had packed in, one of the numerous complaints about my sound system. Like a politician, it promises lots but delivers little with poor DAB  reception and an out of date Android Auto system that the greedy sods at Vauxhall want £100 to do a five-minute job that is a fault of their making. Once we got on the M4, it was a good journey, though huge stretches of road were closed due to them 'upgrading' to less safe 'Smart Motorways'. I'd opted to drop Colin off first to avoid the congestion in Oxford that we'd encountered earlier. I dropped Colin off at 7.30, Anwar 25 minutes later and finally got through the door at 8.15. I played Jay's Virtual Pub Quiz with my parents, aiding them with my more modern knowledge. I also had a few drinks as it helped me to wind down. I stayed up later than usual, with Match Of The Day on in the background as I edited my photos. It had been a good day, but disappointing that I bought nothing nice home. There had also been little time to relax and do other stuff but it had been nice to do two grounds in one journey. 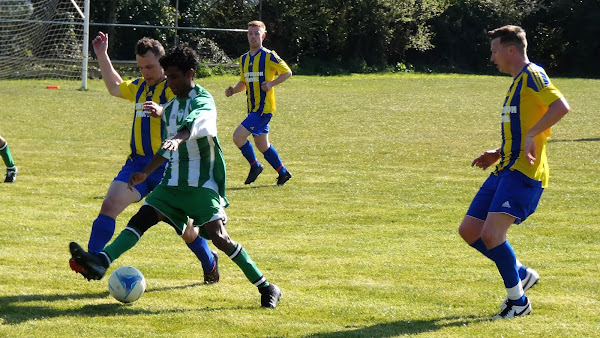 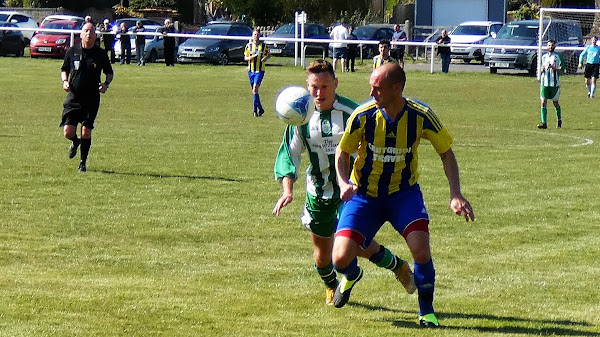 THE GROUND
Tunley Recreation Ground an excellent venue for what is the 14th level of English Football. It's set in lovely countryside and has great views and bags of character. There's also a decent-sized cover with club branding, upon a raised bank and holding around 30 at a push. There was an outdoor bar on my visit, selling cans of Carling and Thatchers for £2.50 as well as snacks. The area is a bit out in the sticks, but mobile coverage is good and there is a bus stop right outside. Opposite is a pub, The King William Inn which does food and real ale and cider. 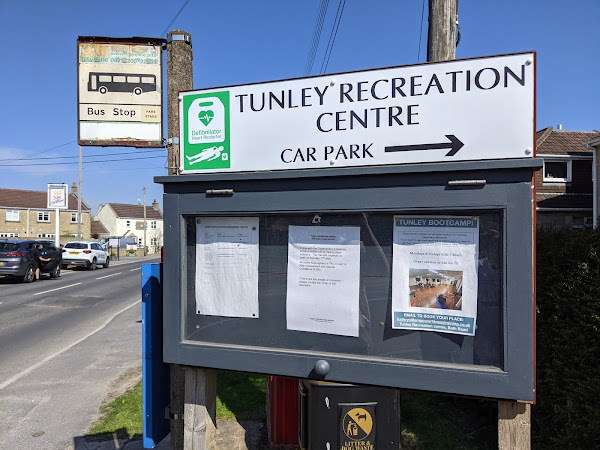 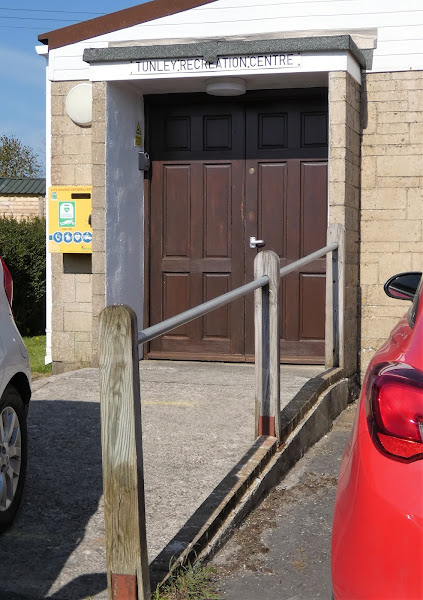 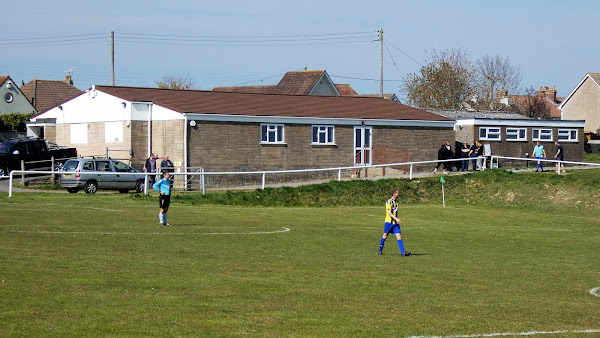 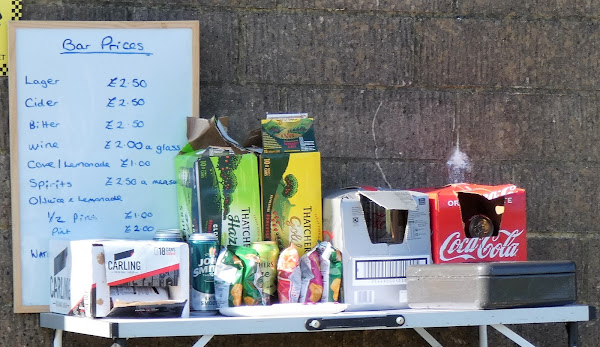 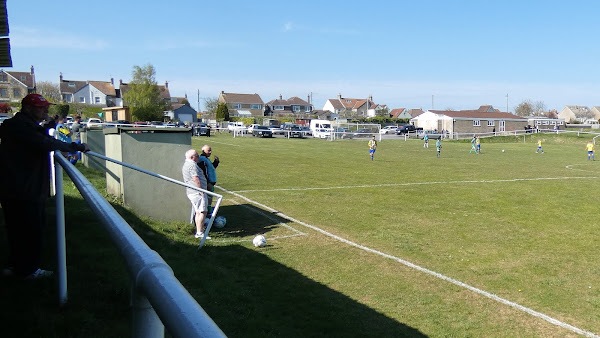 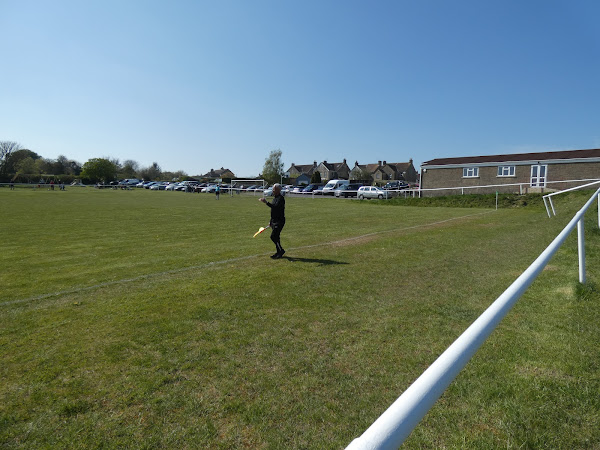 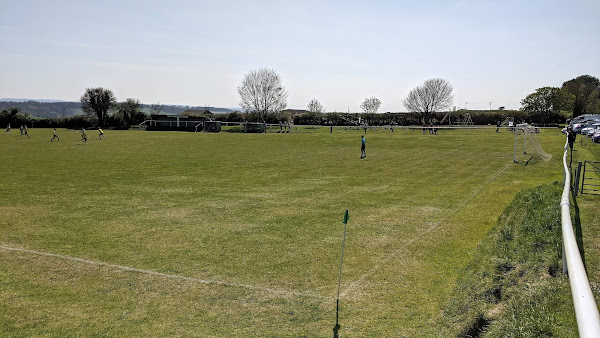 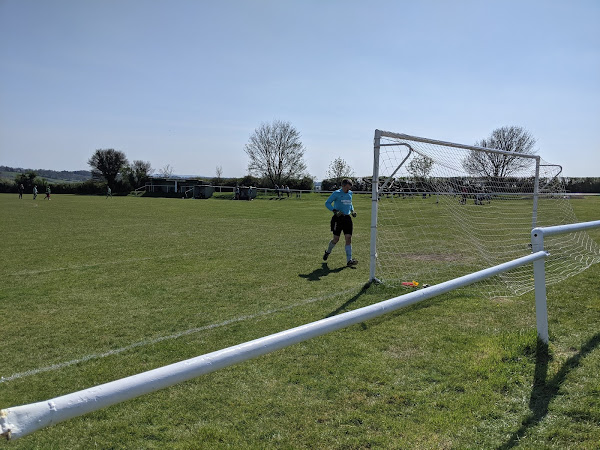 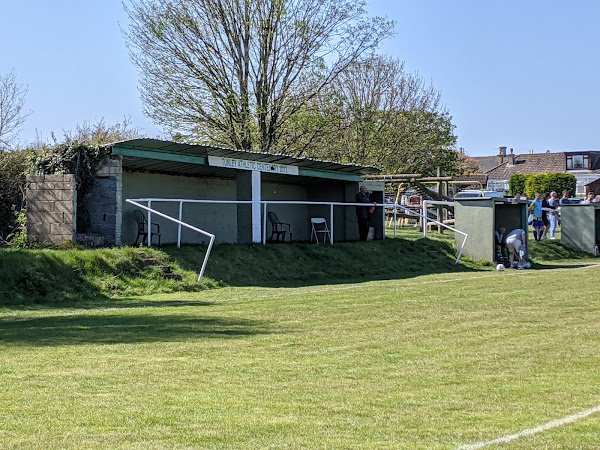 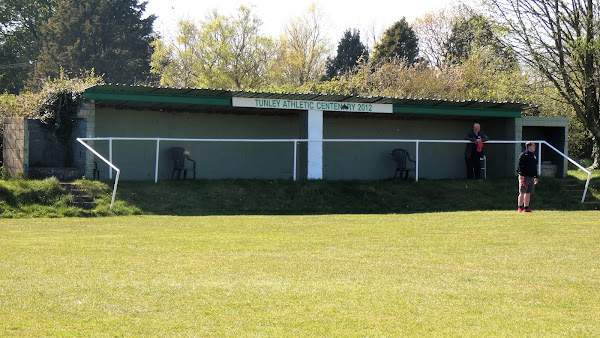 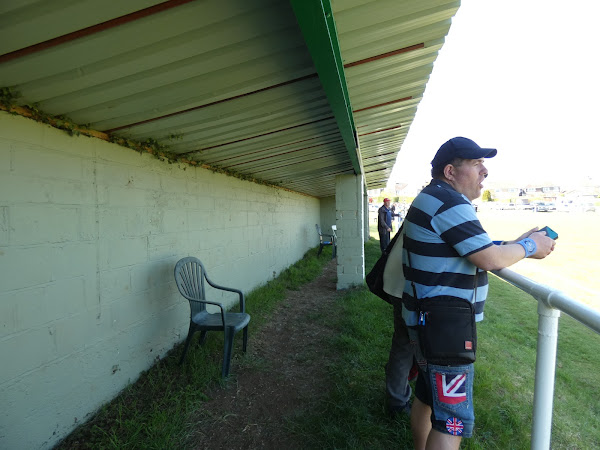 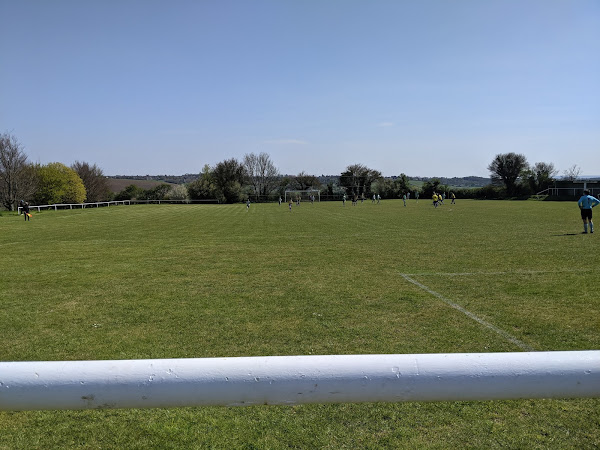 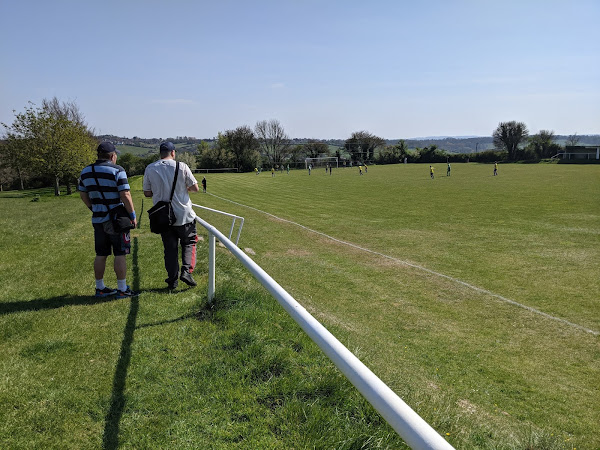 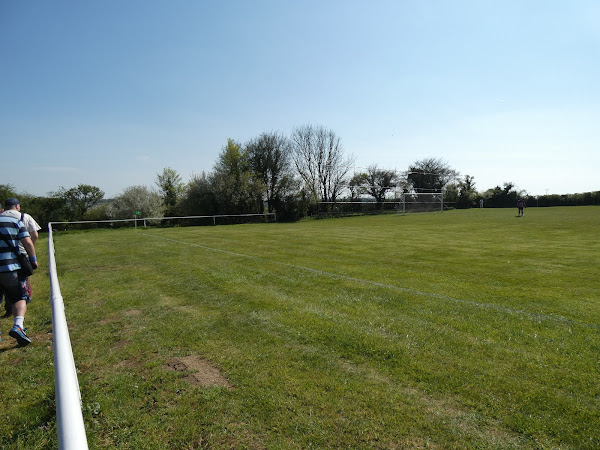 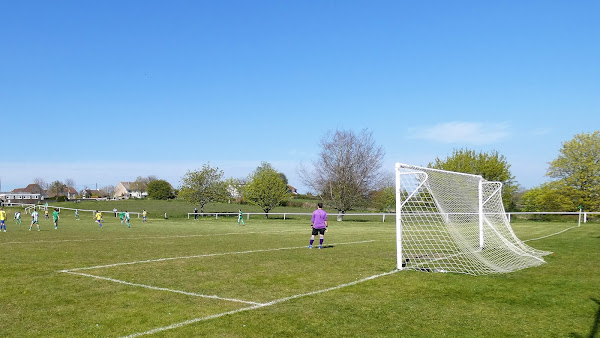