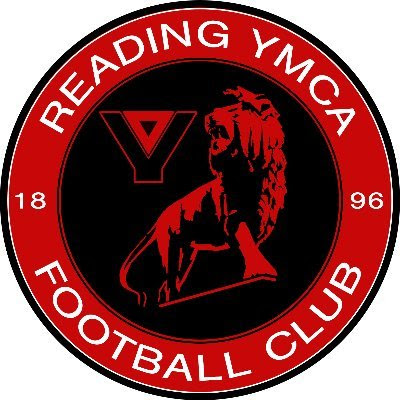 The club was established in 1896 and was formed as part of the Young Men's Christian Association charity. They joined the Reading League in 1911 but spent most of their early years until a progressive spell in the 1950s, 60s & 70s saw them enjoy a 19-year unbroken spell in the top flight. The closure of the club's youth system in the 1970s hit the club hard and it would take until the mid-1990s for them to recover. In 1998, the club finishes as runners-up in the league's Thames Division 2, earning themselves promotion. At the turn of the millennium, Reading YMCA  were Division 1 champions and took their place in the Premier Division for the first time in 20 years. They won the Premier Division in 2003, though this confusingly was not the top tier as it earned them promotion to the Senior Division. They were Senior Division champions in 2010 and 2013 and despite playing at Reading Town's Scours Lane for a period during this time, were either unable or did not want to take the step up to semi-pro football. This was a highly successful period for the club and they were runners-up to Highmoor IBIS Reserves in 2014 and only missed out on the title in 2015 to Marlow United thanks to a three-point deduction for failing to fulfil a fixture the previous November. The league had changed its name to the Thames Vally Premier League (Premier Division) in 2015 and YMCA were champions for three seasons on the trot between 2016 & 2018, going the latter two seasons unbeaten in the league. In December 2019, the club resigned from the league after ten games for whatever reason though their 'Rapids' second-string side would go on to finish 6th in Division 1 and that subsequently became their first team. When the pandemic hit last season, Reading YMCA were in 2nd place, behind Wargrave but sitting in a promotion spot before the league was declared null and void. This season, the season was interrupted again but unlike many others, the Thames Valley Premier League has decided to play the season to completion. Again they sit behind Wargrave in the pecking order with five games played. 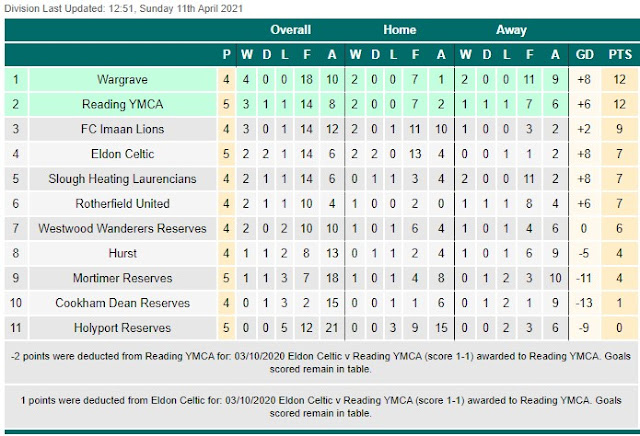 Cup honours include the BTC Senior Cup (three times), the Berks & Bucks Intermediate Cup and the Maidenhead Norfolkonian Cup (twice). There are two other teams within the club - the Rapids (reserve side) and Rockets (veterans side) as well as some kids sides. During normal times, the club has a bar with a limited range of hot food. They play at the Cauldron, based in Padworth which has a population of just 919 according to the 2011 census. It has a church and a manor house. The nearest large place and train station is Aldermaston 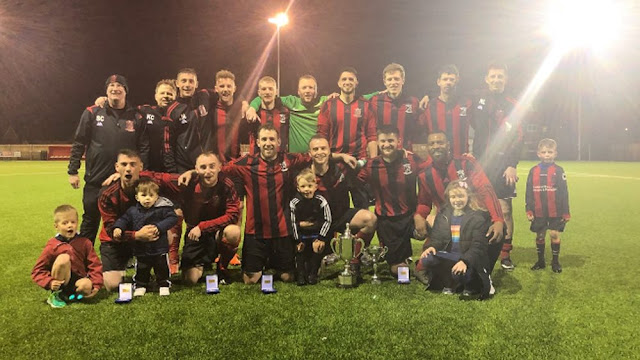 MY VISIT
I thought I was going to have a blank midweek, all the options that were above board were miles away. There was one decent venue within a reasonable distance though and I had learned this thanks to hopping pal Joseph (Groundhopping FC on YouTube) who visited a number of grounds last summer when he visited every ground in Berkshire in one day. It was a decent venue for the level, with a wooden fence surrounding the pitch and it represented the ideal opportunity to visit. I'd have to seek permission from the club though, as it was on private land (as I understood) and that is currently banned by the ludicrous FA. I reached out to the club and explained that I wanted to cover them for my blog and would that count as media and luckily, they were happy to have me as long as I abided by social distancing rules. It's sometimes quite tricky to find information about club histories below step 6 but there were quite a few helpful articles on Reading YMCA which helped me make a start on my blog on Tuesday evening. I went to work an hour early as I have tended to do, meaning that I could finish at 2 and have a couple of hours at home. I had a bath and some lunch whilst watching TV before walking down the chemist to get my prescription. I noticed that a ground that I'd wanted to visit for a while, Harrow Hill, were accepting fans and made a note to bear it in mind for Saturday. I left at 4.40 and had a good journey over, arriving at 5.35. The club was really friendly and I was glad I'd made the effort. 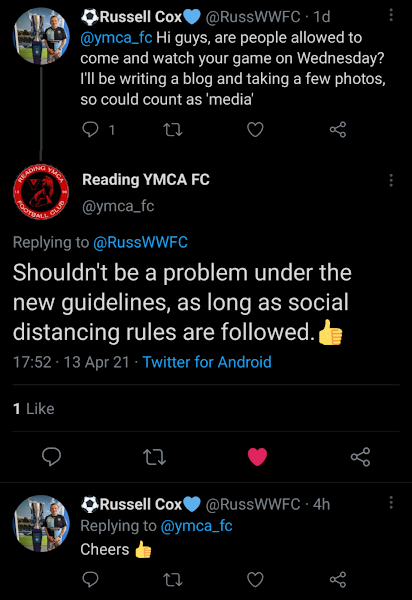 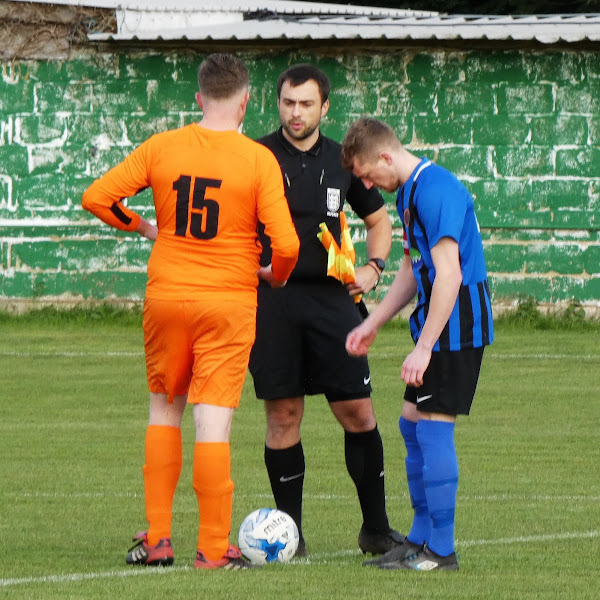 Reading YMCA had played four games and sat in 2nd place - they returned to action on Saturday with a 5-1 win at whipping boys Holyport Reserves. Other victories have come against Mortimer Reserves (5-1) and Rotherfield United (2-1) whilst they lost 4-1 at league leaders Wargrave. They've also had an away walkover against Eldon Celtic at the start of the season. Visitors Hurst were down in 8th, having played a game less. They'd drawn 1-1 against Cookham Dean Reserves on Saturday and had suffered defeats to Westwood Wanderers Reserves (1-3) and FC Imaan Lions (3-7). They did, however, win their opening game of the season with a 3-2 win at Holyport Reserves. The visitors were in their orange change strip whist the hosts were also on their change kit of black and blue stripes. Hurst started brightly but it was Reading YMCA who appeared the more effective early on, forcing a good save out of the home keeper on 9 minutes and firing narrowly wide of the left-hand post on 13 minutes.  Reading YMCA took the lead on 18 minutes with an excellent free-kick that I caught on video. Hurst came back and had a header narrowly wide after 20 minutes. The visitors did have a fair bit of possession in the final third, but they lacked quality, though they did force a good save out of the YMCA keeper before firing wide. It was a quick first half and the second period kicked off at 6.55. Reading YMCA looked to extend their lead and fired narrowly wide after a few minutes of the restart. There was a brief delay as a lot of the balls were too flat for the referees liking. It had been a competitive game and one of the visiting players rolled over onto the concrete around ten yards behind the goal. The game was sealed on 74 minutes with a header from a corner to make it 2-0, though Hurst would force the home keeper into a great save at his near post four minutes later. It had been a decent contest to watch and another good journey home with me getting in just after 8.30.

THE GROUND
THE CAULDRON is a decent setup for the level. The pitch has a wooden fence surrounding it on two sides with the other two hemmed in. There's a small village hall on-site for refreshments, though this was closed on my visit. The ground is down a lane in a rural area with a petrol station the nearest facility and a large pub around a mile away. 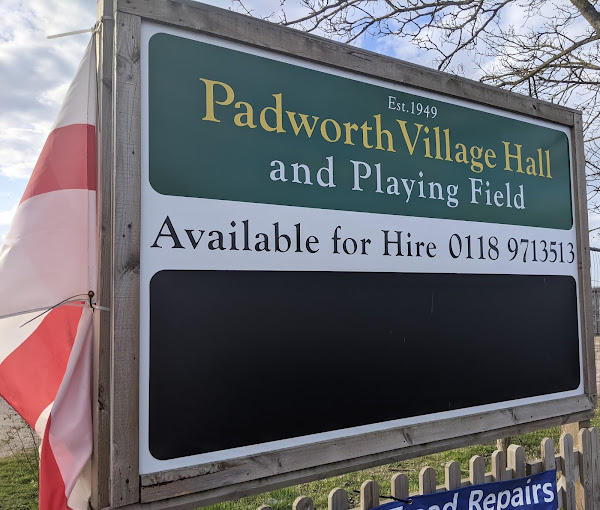 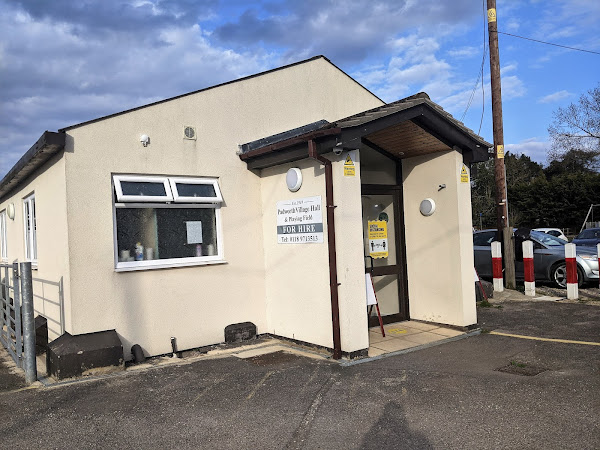 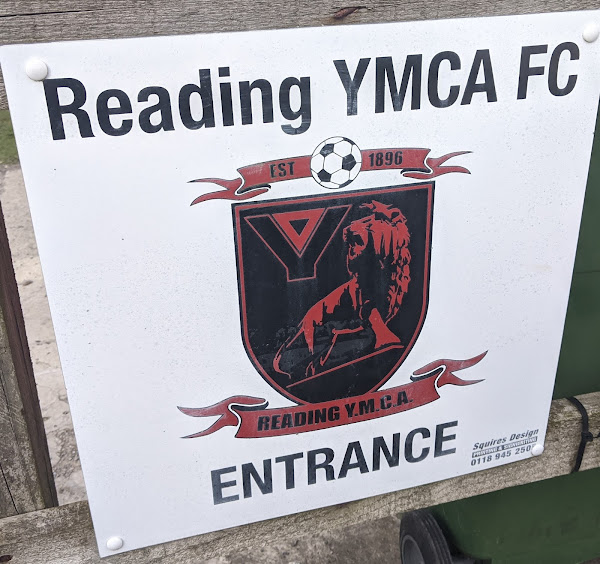 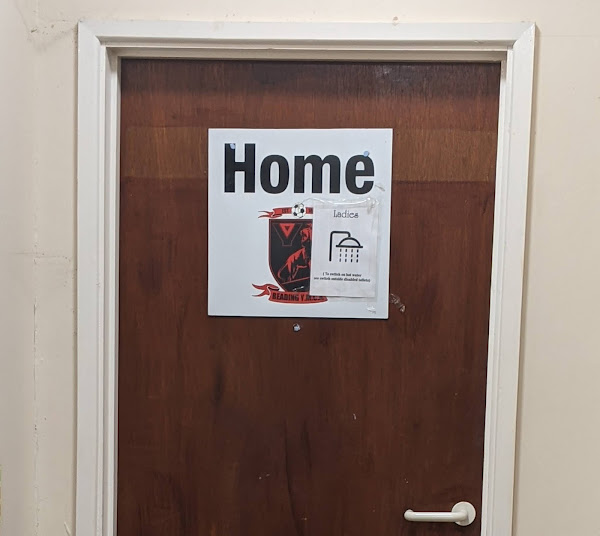 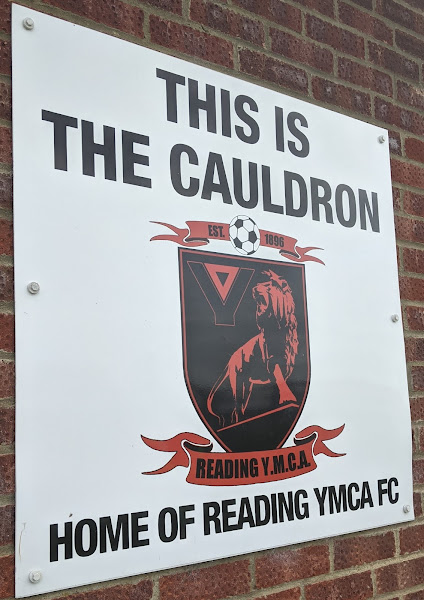 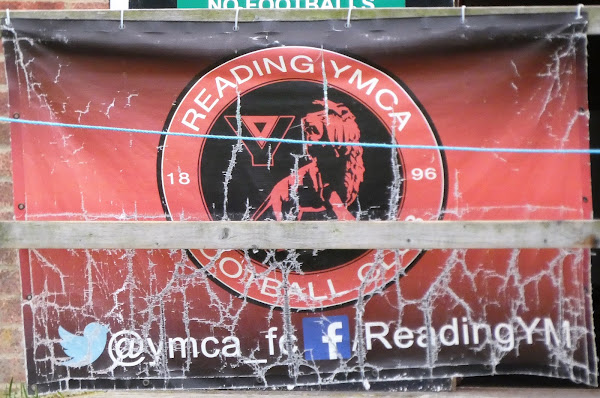 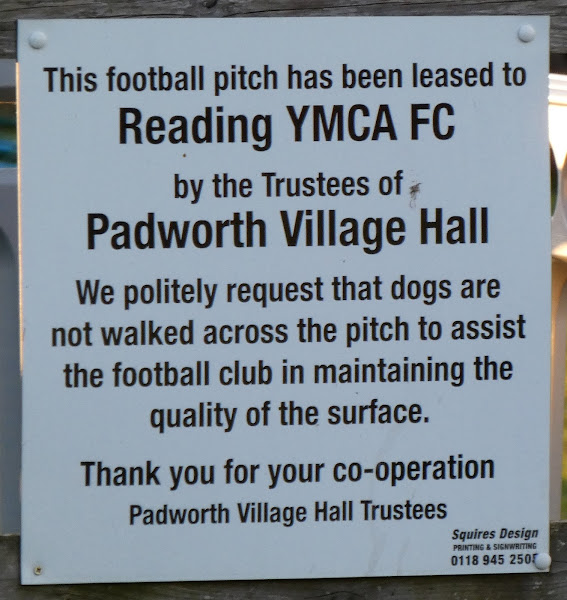 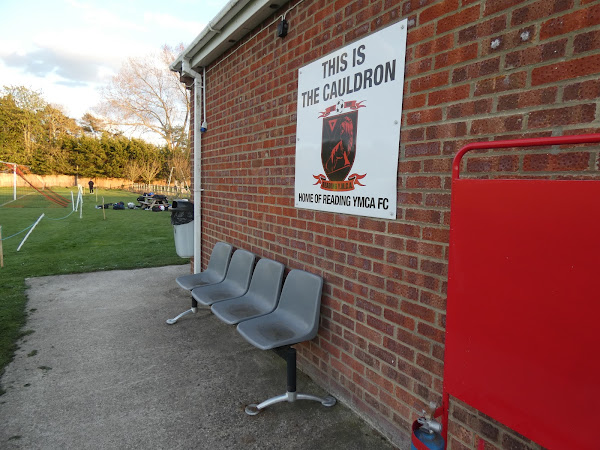 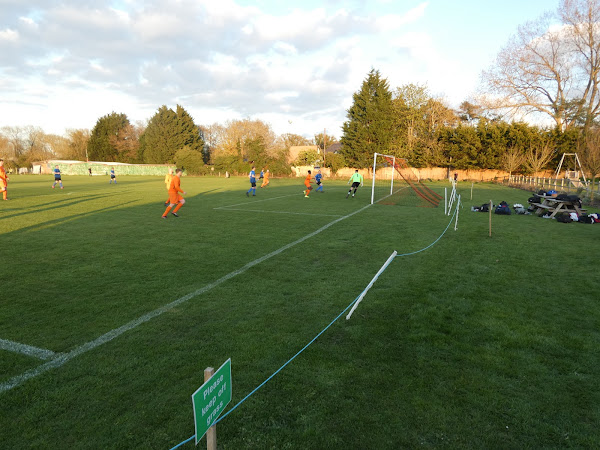 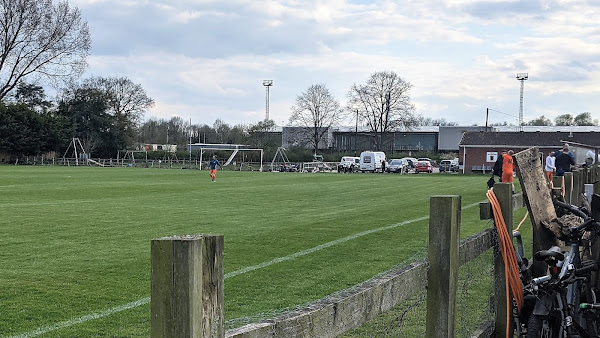 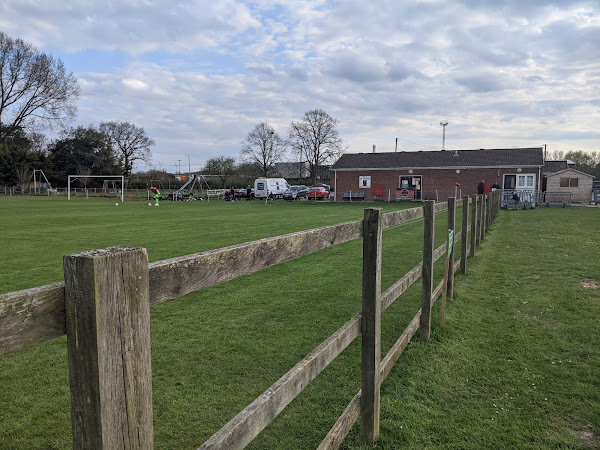 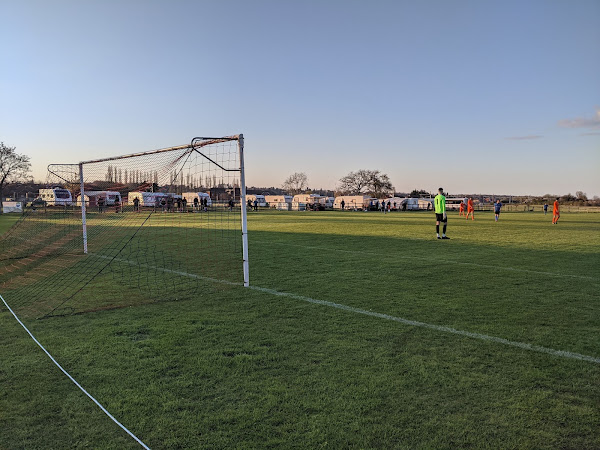 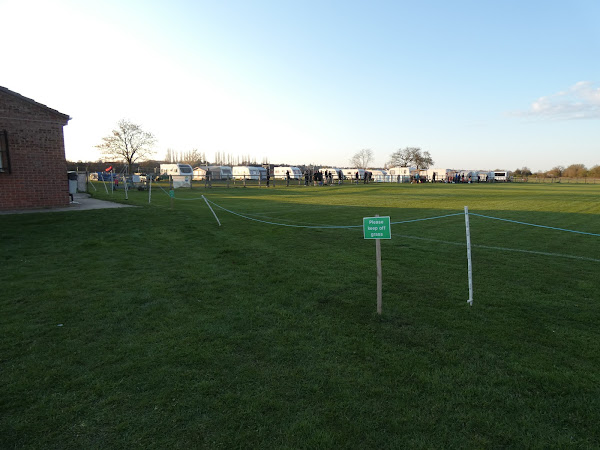 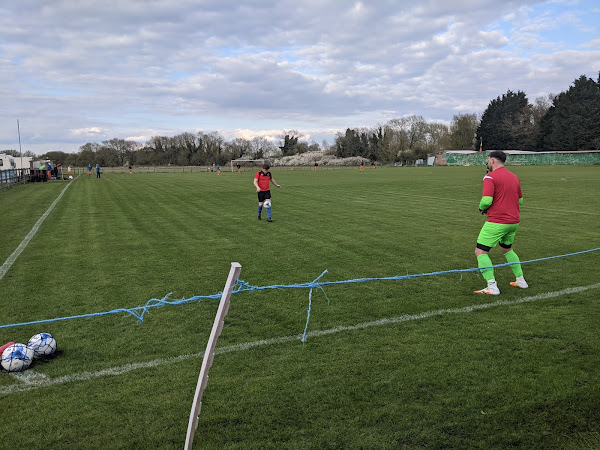 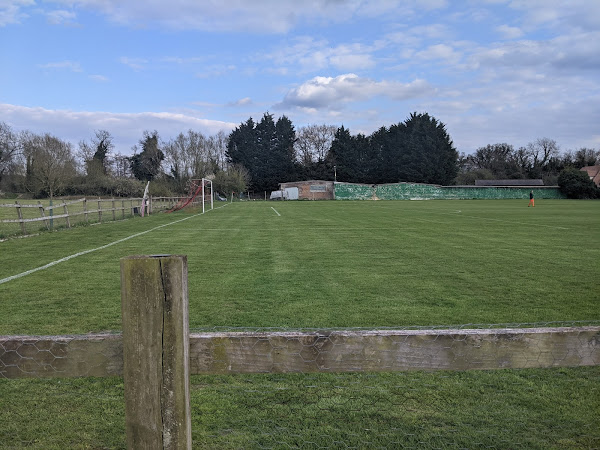 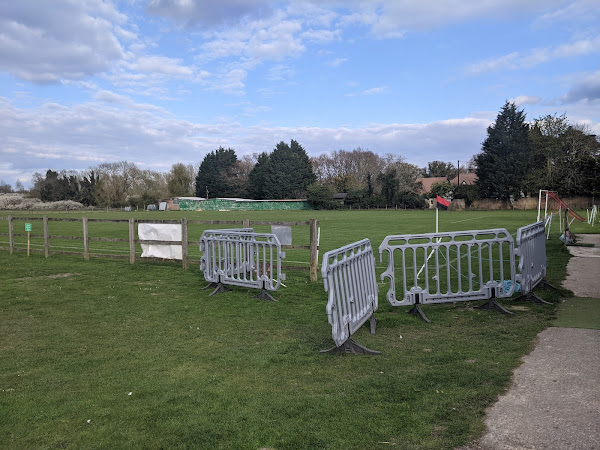 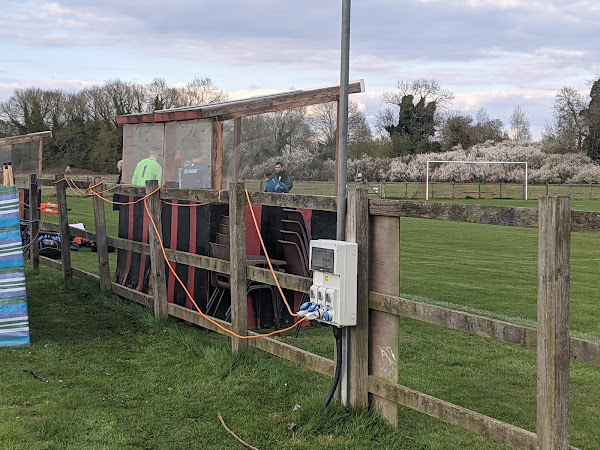 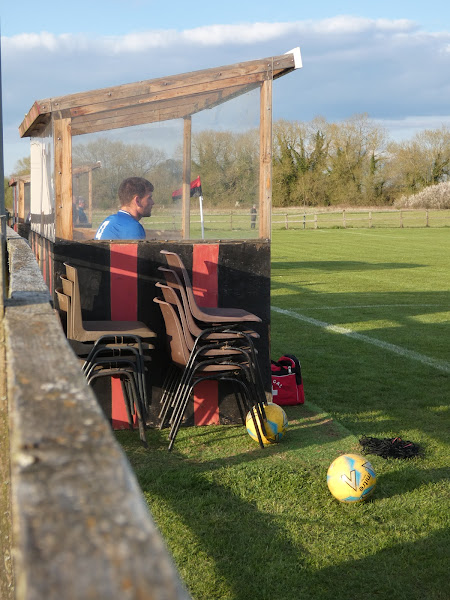