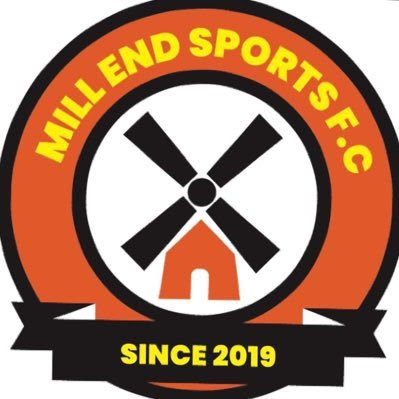 The original Mill End Sports FC was established in 1937 and from what I can tell, played in the Watford & District League during their formative years, I couldn't find any league tables from that period but they moved to the Middlesex County League in 1968. A 7th placed finish in their first season was respectable but they gradually slipped down the table and even finished bottom in 1972. Results gradually improved after that and by the mid-late 80s, they were far more successful, finishing as runners-up in 1984 & 1985 before being crowned champions the following year. In 1987, they joined the Chiltonian League and were Division 1 Champions in 1989. The following year, they achieved what was probably the best-ever finish in the club's history, finishing 4th. Whilst the league never had a defined place in the non-league pyramid, it supplied clubs to the South Midlands League which itself was a feeder league to the Isthmian League. They were demoted to Division 1 in 1992 due to ground grading issues and left the league altogether the following year. There was a serious possibility of them getting floodlights in the late 1990s, but plans fell through. A Mill End United would finish 11th in the Middlesex County League in 1997 but the original club would not emerge until 1999 when they joined the Herts Senior County League Division 1. In 2003, they'd finish 3rd but left to join the West Herts Saturday League. They'd rejoin in 2006 and the following season, a 3rd place finish was good enough for promotion to the Premier Division. Though they struggled at the higher level, they spent all but one season in the Premier, with a best-ever finish of 10th in 2009 and 2015. Despite this, the club appears to have folded after this. In cup competition, the club won the Hertfordshire Junior Cup in 1969 and were runners-up in 2005 when Marina OS Sports lifted the trophy. 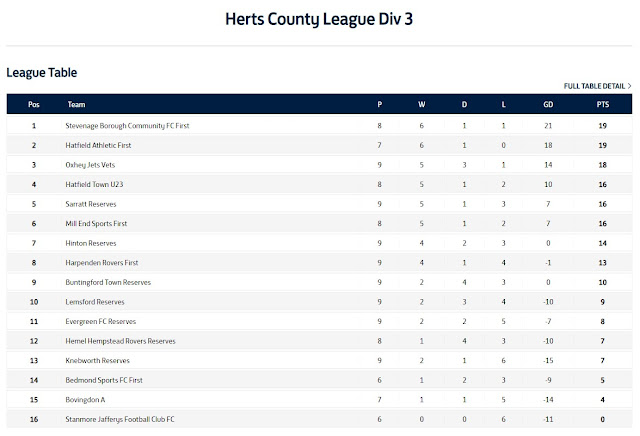 In 2019, a new Mill End Sports was established by former Oxhey Jets FC stalwart Jim Wagner whose aim was to provide a platform for youngsters to progress to senior football. The club was placed in the Herts Senior County League Division 3, which sits at step 10 of the non-league pyramid or level 14 of the English football league system overall. It has been a bit of a false start for the club so far, last season was interrupted due to the coronavirus pandemic and the records are nowhere to be found. I did learn it was a poor season, with just 7 points gained all season. They did, however, attract around 150 fans to their games, as locals flocked to support them. This season, a decent start has been made and Mile End Sports sit in 6th, having won 5, drawn 1 and lost 2 of their games so far. Once again though, the pandemic has thrown things into chaos and the season looks to be curtailed for the second season in a row. The semi-rural village of Mill End is located near Rickmansworth which has an underground station on the Metropolitan Line. It is also located close to junctions 17 & 18 of the M25 Motorway. The population is just under 24,000 and it was once home to George Orwell and Val Doonican. It is also a popular filming location, having been used for shows such as Grange Hill, Harry Enfield's Television Programme and Ashes To Ashes.

SOURCES USED
The Cold End Article
Herts County League Cup Winners (cached)
Non-League Matters Tables Archive
Waggy & Maden Talk - Grassroots Series Podcast
FA Full Time, Wikipedia & FCHD
Non-League Directory 1993
MY VISIT
It had been a long and stressful time without a game. 15 weeks or 105 days since my last game at Newport Pagnell on 19th December. We all knew that a break would be coming, but cruel Prime Minister Boris Johnson promised us the world for Christmas, only to snatch it away with a few days to go. I myself had a nice double in Dorset planned as restrictions were due to be relaxed for a few days but this was taken away after working weeks of 50+ hours. The void was filled by watching Wycombe on the iFollow service, but generally, it was a tedious, miserable and empty experience that I'd not enjoyed one bit. It was also poor for my health, with extra food and drink taken and I'd put on a few pounds. But gradually, the death and cases fell. Of course, the most infectious places - schools - opened first and so cases levelled out, but deaths continued to fall as the NHS worked brilliantly on the vaccine rollout. I was then, looking forward to going to football with the authorities blessing. I jotted down a shortlist of five games in the Hertfordshire League. I chose Mill End Sports as it was the nearest at just over 12 miles away. The FA and DCMS then threw a spanner in the works declaring no spectators. This was despite fans being allowed in even the worst areas back last year and absolutely no infections occurring. How they expected clubs to police open fields is beyond me, but that was what the brainless authorities were saying, even though you could meet in the self same park as long as you were obeying the outdoor mixing rules. There was even talk of fans having to wait until May 17th to return, even at Non-League which was ludicrous. I'd already arranged in advance to film the game for the club and put up some brief highlights, just so as to stay on the right side of the 'guidance'. In the week before the game, a few hoppers had been put and about innocently enjoying their hobby in a safe manner, but even so, there had been a few holier than thou people on social media criticizing them. 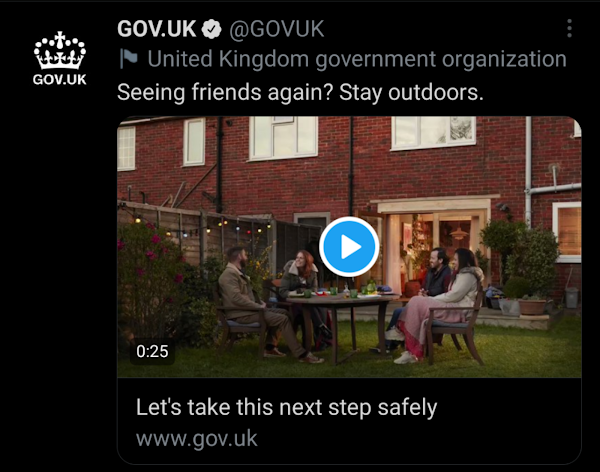 The few days before the game saw me back at work after 18 fruitless days off. As ever, the Bank Holidays saw the store rammed and while my employer has been decent in recent times, you can't legislate for the stupidity of the general public. The packed beaches and litter-strewn parks laid testament to that, but that was all fine and dandy according to the authorities. Good Friday saw Wycombe record a well-deserved win over Blackburn Rovers, which was most welcome and I celebrated with a sensible afternoon's drinking after work. I had a fairly early night but not the greatest sleep, waking up in the middle of the night and unable to get back to sleep. I watched TV for a while before reading the Daily Star on my tablet before getting up and having a shower. The morning was spent going for a walk, around 6 miles in total while I caught up with my podcasts. I came back and had a decent jalapeno burger stack for lunch which I'd bought from work yesterday - reduced from £4 to £1.37. The last hour at home really dragged and I was glad when it came to 2 and I could leave. The journey had a slight diversion, but even so, I was there by 2.30. I was delighted to bump into pals Dan, Nigel, Richard and Giles who by sheer coincidence had decided to take their daily exercise in this nice local park. After a strenuous lap of the pitch, a breather was needed and the railing surrounding the pitch provided an ideal stopping point. I also met some people from Mile End, Jim and Glenn gave me an excellent welcome and were really friendly. I was going to use my tripod, but it proved far too low to be comfortable to use and a chair would be preferable. I did manage to capture all the required action though, using the camera as usual. 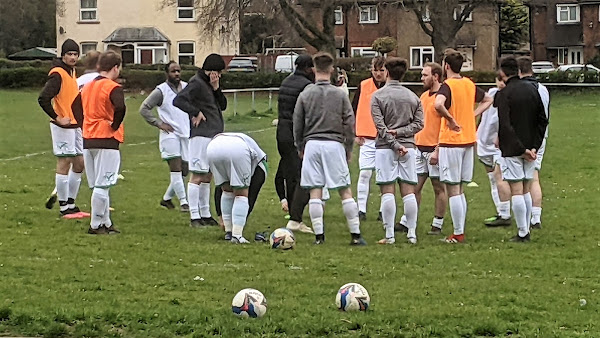 Mill End Sports sat 6th in the table before it was abandoned, having won five, drawn two and lost one of their games so far. Those two defeats had both come at the start of the season with Sarratt Reserves completing the double over them in their first two games. Since then, they'd been unbeaten, with their last game on 5th December seeing a 5-0 win over Stanmore Jaffreys. Evergreen Reserves were 11th in the league, having won two, drawn two and lost five of their games. Their last game had also been against Stanmore Jaffreys with them winning 2-1 on 12th December. It was a decent game, with Mill End well on top. However, at the time of going to press, the scorers had not yet been announced. On 24 minutes, it was 1-0 when a cross was headed home. The lead was doubled on 38 minutes when the Evergreen keeper came for the ball but did not get it and the ball was poked home from close range. Evergreen hit the post and probably deserved a goal for their efforts but it was 3-0 on 66 minutes, a Mill End man got away down the left, cut in and finished past the keeper. It had been a decent game in great company and the referee had a good game too. For my mental and physical health, it had been the best Saturday of the year and no doubt that would stand for the 44 people that were using the local park and abiding by the outdoor mixing rules. I said my goodbyes and got on my way, half an hour later at 5.25 I was home. The evening was spent blogging, video editing, having dinner, drinking cider and playing Jay's Virtual Pub Quiz. I was glad to have the Sunday off, due to it being Easter Sunday. Reflecting on my filming debut, I didn't really enjoy it and have nothing but admiration for those who do it week in, week out. I did manage to get all three goals though - they are below.

THE GROUND
MILL END SPORTS & SOCIAL CLUB is a tidy setup, similar to Tring Town. The clubhouse was closed on this occasion, but there's a fully railed pitch with plenty of hard standing. The club has a good spirit and friendly nature and you will be made to feel welcome. In normal times, pubs and shops are nearby, whilst Rickmansworth underground station is 1.5 miles away. 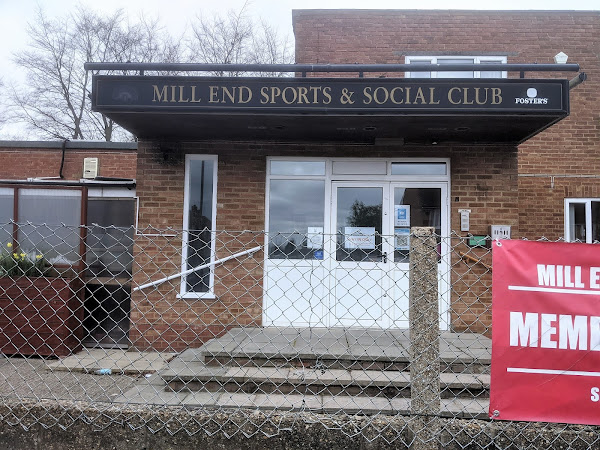 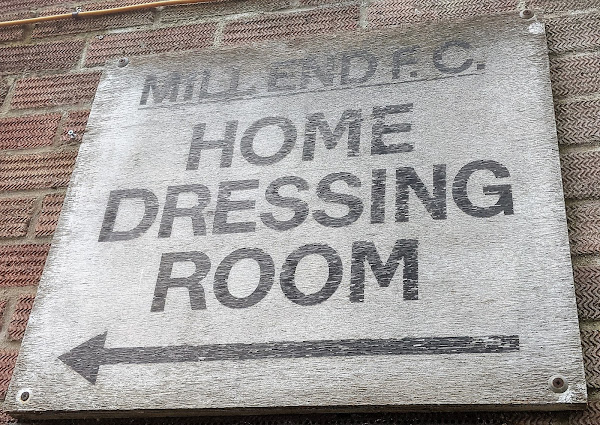 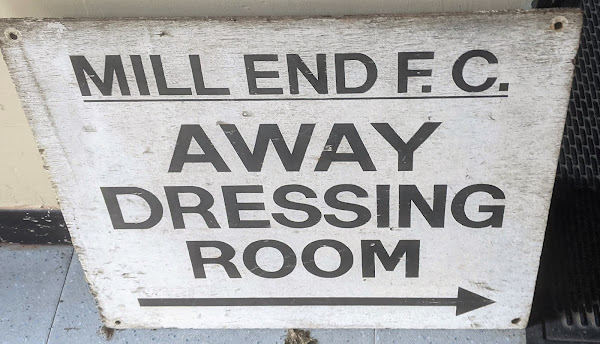 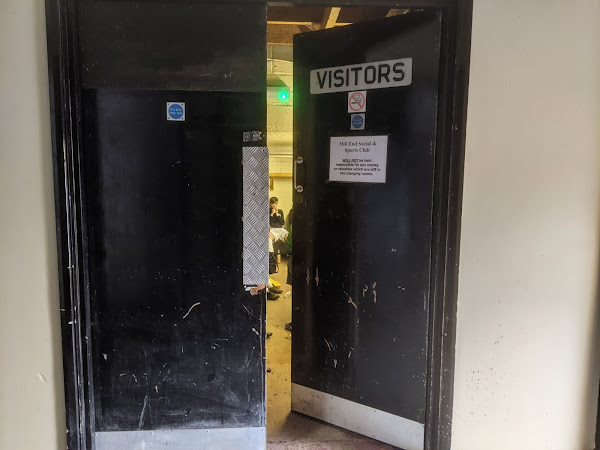 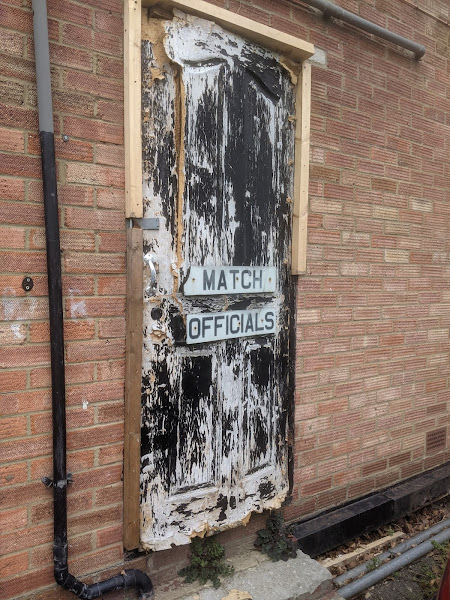 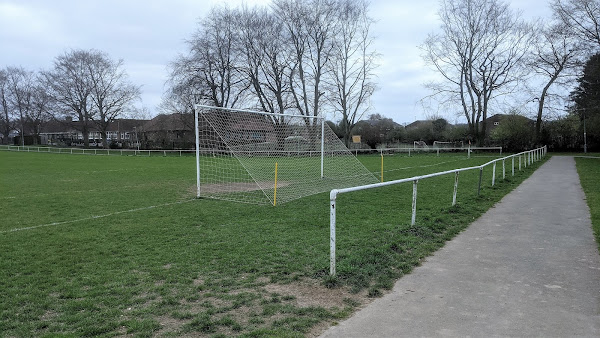 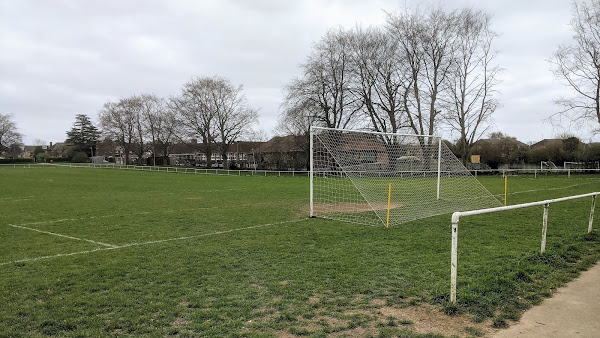 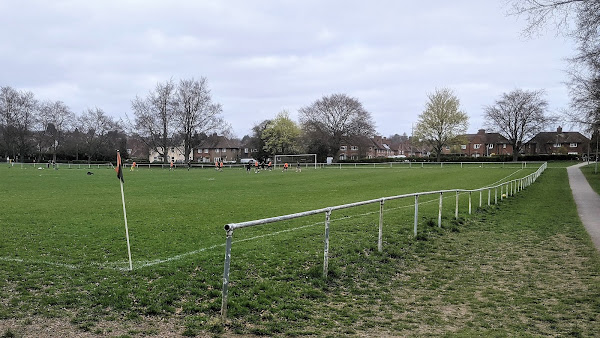 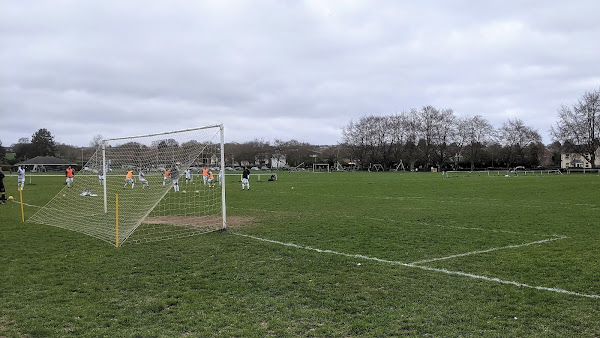 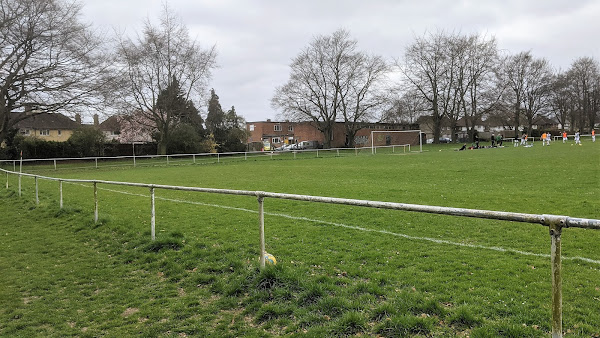 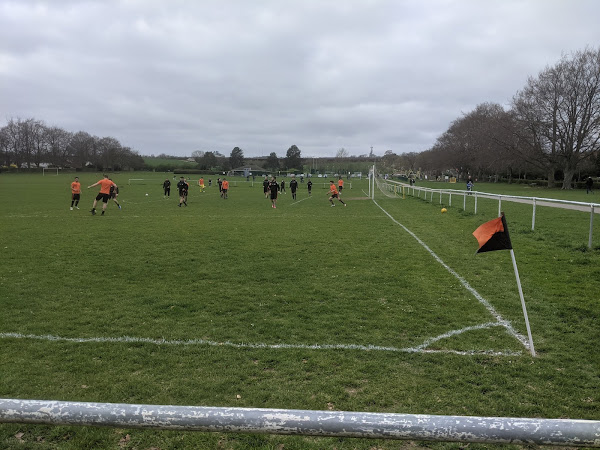