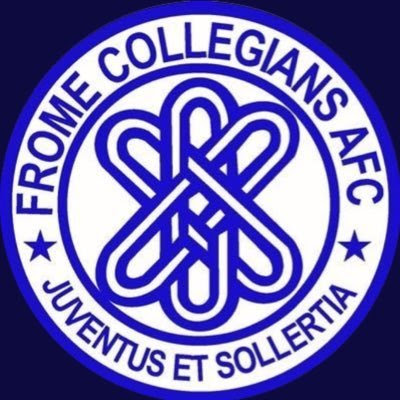 
FROME COLLEGIANS FC - A BRIEF HISTORY
The club was established in 1976 and played in the Trowbridge & District League before joining the Mid Somerset League. They progressed up the leagues to reach the Premier Division in 1993 and were champions two years later. After a runners-up spot in 1997, they joined the Sussex County League, starting in Division 3. Frome Collegians won promotion at the turn of the millennium after a 3rd placed finish and spent a couple of seasons in Division 2 before being relegated back. In 2004, the club won the title and were promoted to Division 2, moving across to Division 2 East when the league expanded. In 2010, Frome Collegians were champions and went up to Division 1. In 2014, a 3rd place finish behind Broad Plain House and Wrington & Redhill was good enough for promotion to the Premier Division. The following season, they finished 3rd - being a step 7 league, this was the highest placing in the club's history. They continued their decent form the following season but bad weather had catastrophic consequences and unable to squeeze 18 games intro the final six weeks of the season, they were forced to resign from the league. With their record expunged, they rejoined the Mid Somerset League, this time in the Premier Division (step 10 of non-league). A 3rd place finish in 2017 was followed up with title wins in 2018 & 2019. After this success, they took the step up to the Wiltshire League (step 7) and were in 9th place when the season was abandoned in March. Fewer games had been played this time out, with Frome Collegians sitting 5th when the season was curtailed and cancelled in favour of a Spring cup competition.
Frome Collegians are yet to play in the FA Cup or FA Vase due to their lack of facilities. Information is scant on how they fared in local cup competitions too. They share the town of Frome with Southern League outfit Frome Town. Situated in East Somerset, the town has a population of just over 26,000. Traditionally, the town's industry was based on cloth but this gradually decline and the last mill closed in 1965. Nowadays, it acts more as a commuter town with nearly half of the working residents travelling to employers in the likes of Bristol & Bath. Other sports played in the town include cricket & rugby. The town is home to cider producer Lilley's, but this does not have the best reputation against real cider drinkers, disliked for being too sweet and made from concentrate and is in truth, more of an alcopop. However, it's a highly successful business and is popular amongst the student generation. Famous people from Frome include racing driver Jenson Button, actress Anna Friel (who pioneered soap's first lesbian kiss in Brookside) and Danny Goffey, drummer with 90s band Supergrass. 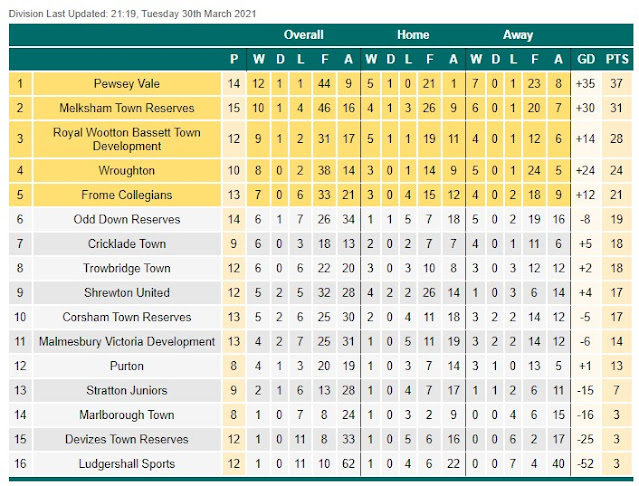 MY VISIT
I had been hoping to do a game in midweek but options were severely limited. I'd decided to leave Rotherfield Park who had a game on Wednesday as their league was playing until the end of June. I did really fancy going to Somersham Town on Tuesday but after being given the go-ahead on Tuesday by the club, the spiteful FA presumably contacted them to tell them that fans were not allowed. It's funny how the FA are quick to react when they want to move kick-offs for a celebrity funeral or to oppose the ludicrous European Super League. But when it comes to grassroots & non-league clubs and fans, they just can't be bothered to arrange the safe return of spectators. Instead, in the FA Vase ties last weekend, which had safely had fans in previous rounds, they offered a derisory £100 payment as compensation for not having fans - a bit like bulldozing your house and then buying you a tent to say sorry. The club was most sympathetic and I don't place any blame on them, but it was annoying that I'd already spent an hour or so researching the history for my blog. Wednesday bought deep joy with Wycombe securing a last-minute win against Bristol City. It was a brilliant performance and saw Adebayo Akinfenwa score his first-ever goal at Championship level. Even more shockingly, it was goalkeeper David Stockdale who won the penalty after his foray upfield forced the visiting defender into a handball as we threw the kitchen sink in a slim attempt to stay up. Because of restrictions. I've managed to see 29 games on the iFollow service and these have garnered 1.03 points per game rather than 0.5 PPG from the games that I've missed due to being out groundhopping. That will hopefully be the last time I see us this season and there is also a decision to make on whether I get a season ticket (which seems good value) or pay on the day. 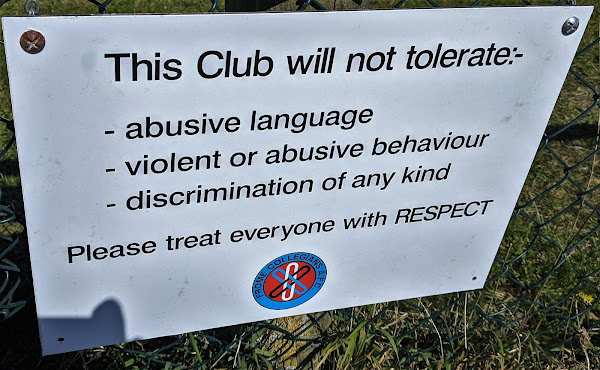 There was plenty of choice for this Saturday but it was hard work finding out who played on private and who played on public land. I presented my fellow hoppers with a list of five options - doubles in Essex, Suffolk & Somerset, plus games at Harrow Hill and Roade. Even some of these were doubtful about admitting fans, so in the end, we went for a double where both clubs had given the go-ahead - namely Frome Collegians and Tunley Athletic. It would be a long day and I'd potentially be missing 10 minutes of the second game, but given the distance, it would be worth it. The night before involved a lot of planning and research as we'd only finalised the details early evening. I was disappointed to find a lack of decent cider outlets as I'd been hoping to take some home with me, certainly, the government's vendetta against indoor hospitality didn't help, nor did the lack of time between games. In the end, I went to bed and got up at my usual work times. After waking just after 6, I had a wash, got changed and had breakfast before getting my things together. I wanted to get in my morning walk, even if it was shorter than usual and I didn't leave until 7.10. I was back by 8.20, spending 35 minutes at home before leaving just before 9. 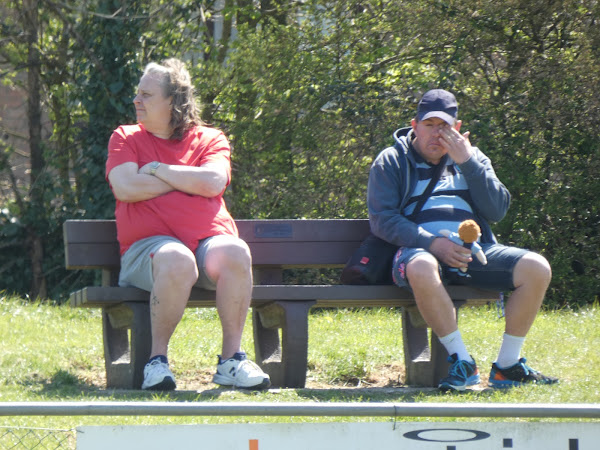 I was at the be stop a minute or so later to find Colin there waiting for me. It was then off to meet Anwar at 9.30 and soon enough, we were on our way. If factored in over an hour extra due to traffic and we needed it, as usual, Oxford's road system was dire and it delayed us by 40 minutes. It meant we had to cancel a planned stop in Warminster to look at their ground and visit the Co-Op in search of local ciders. Both of my fellow hoppers had been asleep for most of the journey, Anwar due to an all-night Fifa session and Colin due to some medication he was taking. In fact, the poor lad remained in a Daze until well into the second half of the game, choosing to have a bit of shut-eye on a park bench for the first half. We got to Lidl in Frome at 12.15 and I picked up a pretzel, some chicken, a Belgian bun and a can of cloudy lemonade for £3.45. From there, we made our way to the ground, parking at Frome Town on the opposite side of the road. It was nice to get some fresh pictures in the daytime as we'd last visited on a Friday evening in September 2015. We got a nice welcome from the guy that ran the club Twitter and did a headcount of 41 just before the game started. It was a lovely sunny day and a great setting in a park, with lots of walkers and their dogs out and about. 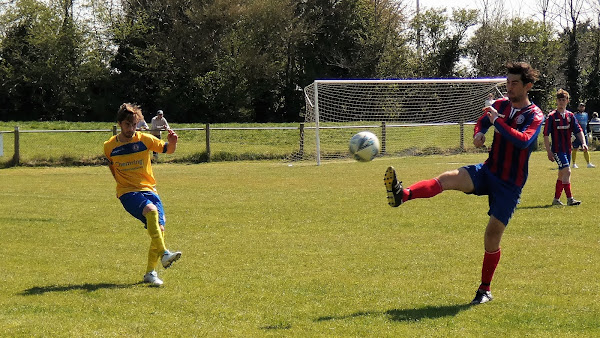 Frome Collegians were in mixed form, having won 7 and lost 6 of their 13 games so far. Since the restart, they had played once, suffering a heavy 4-0 defeat against local rivals Trowbridge Town. Shrewton United meanwhile had won 5, drawn 2 and lost 5 of their games so far. Last week they got off to a winning start in this competition, beating Melksham Town Reserves 2-1. Unusually for this level, proper linesmen were supplied rather than using a club official - in this case from the Army FA. The first half saw Shrewton just about edge it, but it was Frome Collegians that went ahead on 41 minutes. It was a lovely winding run and shot from their number 9 Jake Wright that gave them the lead. A great save from the visiting keeper prevented the lead from being doubled just before half time. The hosts then went on to dominate the second half and they came very close on 65 minutes when they shot narrowly wide. The Shrewton keeper received his marching orders on 72 minutes as he handled outside of his area. From the resulting free-kick, Wright grabbed his second with a low curling shot into the bottom left-hand corner. He'd been the best player on the pitch and looked capable of playing a level or so higher. The game was sealed 12 minutes from time when a cross-field ball was slotted home by Lewiss Perrett. It had been a decent game in nice surroundings but there was no time to spare as we made our way to our second game at Tunley Athletic.

The one goal I did capture today, the free-kick that put @fromecollegians 2-0 up after the Shrewton United keeper got sent off for handling outside his area. Sorting photos now, will do my blog tomorrow afternoon. pic.twitter.com/ndaUbyvWql

THE GROUND
THE OLD SHOWFIELD has a great name and plenty of character. There are some lovely views all around and it's really well kept. Facilities are limited to a railed pitch and dugouts although these have club branding as do a couple of signs. The ground is set in a park and there are numerous other sports facilities there including a 3G pitch and a cricket club. Opposite is Frome Town FC from the Southern League. I didn't see any food or drink on sale. but club officials were selling pin badges. The pretty town is around 20 minutes walk away and has a number of decent looking pubs including a Micro Pub called Just Ales which sadly appeared to be closed on my visit. 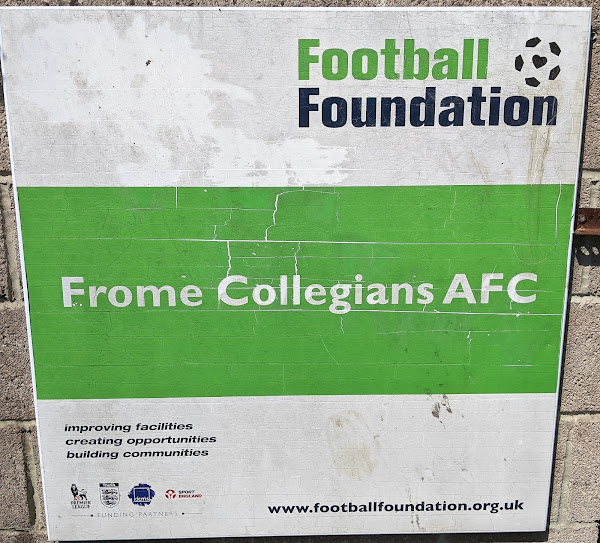 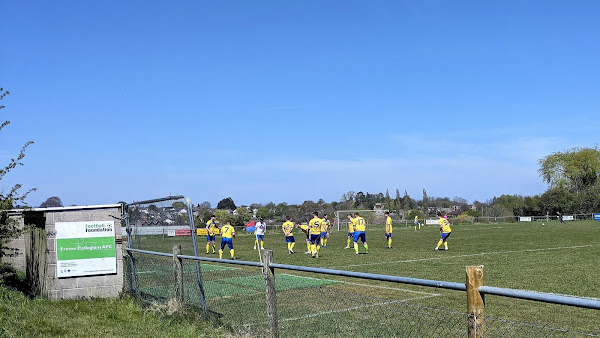 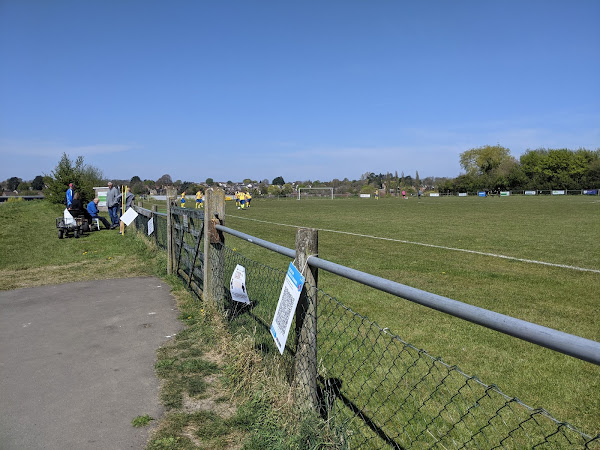 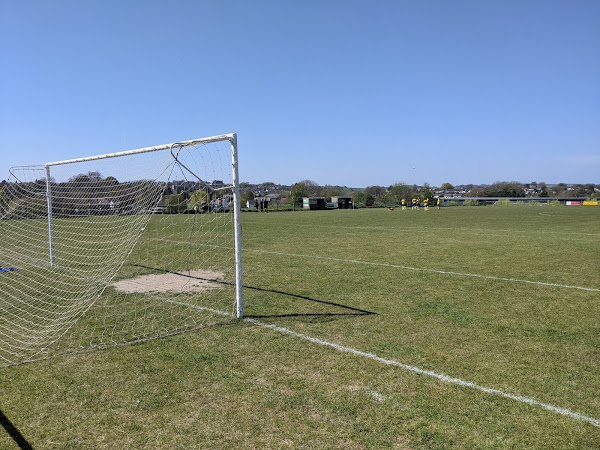 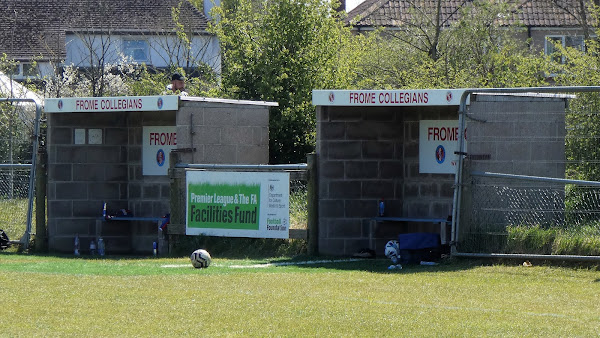 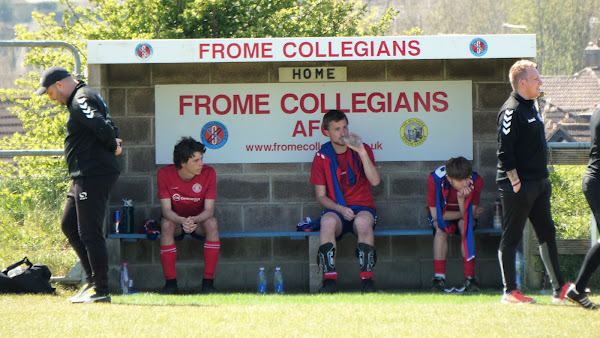 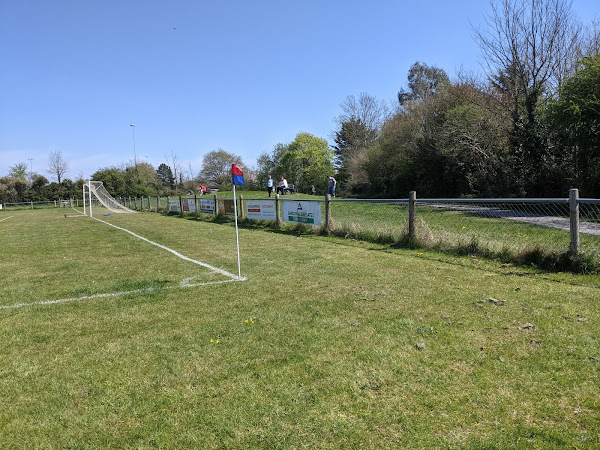 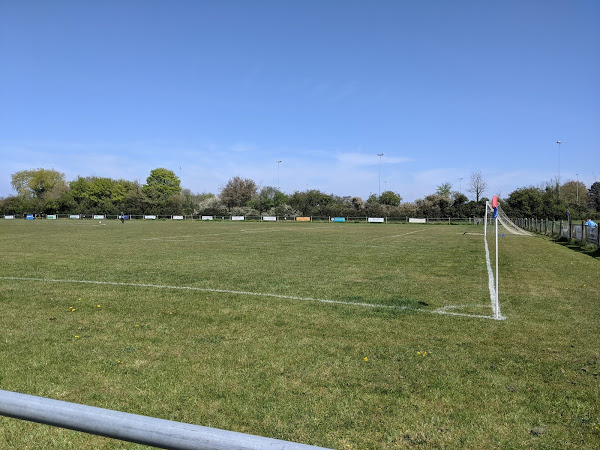 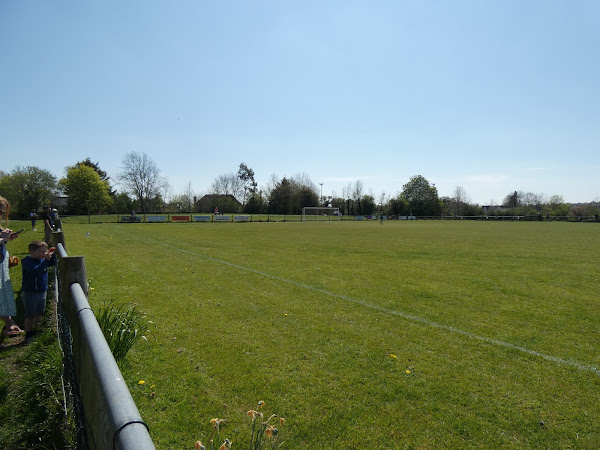 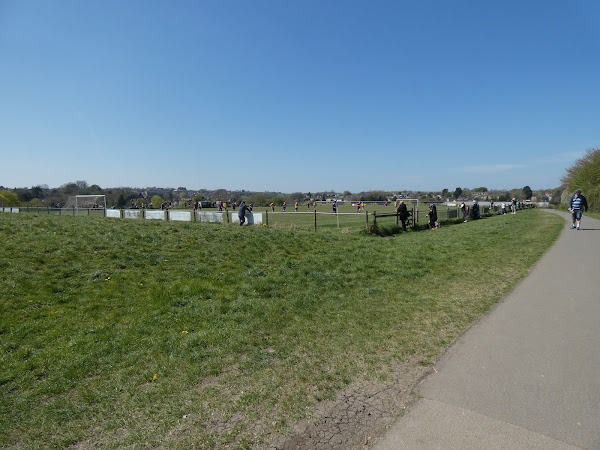