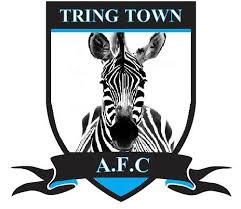 The original Tring Town FC was established in 1904 and played at the current home of Tring Athletic in Cow Lane. Their highlights included winning the Spartan League in 1968 and finishing 4th in the Isthmian League Division 2 (at the time step 4 of the non-league pyramid) in 1984. They reached the FA Cup 3rd Qualifying Round three times in the late 1970s and early 1980s. They also reached the 5th Round of the FA Vase in 1977, losing 2-0 it home to Farnborough Town. The club played at the current home of Tring Athletic in Cow Lane - Tring Athletic having been the original owners of Town's current Miswell Lane ground. This venue was sold to the council in the mid-1970s due to financial issues and as a result, Athletic dropped to Division 3 of the Hertfordshire League. Over £50,000 was spent on improving the changing rooms and social club at Miswell Lane and the ground attracted a crowd of 1000 for a friendly game against Watford to mark the opening. However, the ground lacked floodlights and so in 2003 the two clubs - Town and Athletic merged and moved into the newly-renamed Grassroots Stadium at Cow Lane.

A new Tring Town FC was formed in 2013, taking up residence at Miswell Lane which had been used by Athletic's reserves and youth sides in the interim period. They spent their first season in Sunday League football, though it's unclear exactly what division. In 2014, Tring Town moved into Saturday football, namely the step 11 Aylesbury & District League Division 3. It was a highly successful debut season, with them winning the title by four points. This earned them a double promotion which saw them finish in 5th place in Division 1 (step 9) during the 2015/16 season. For a couple of seasons between 2016 and 2018, the club made the step up to the Step 7 Spartan South Midlands Division 2. They struggled though, finishing second-bottom in both their seasons. The 2018/19 was spent in the off-pyramid West Herts Saturday League were Tring Town finished as runners-up to Potten End. Before the decision was made to 'null and void' the season due to the Coronavirus pandemic, the club sat proudly atop the Herts Senior County League Division 3, which sits at step 10 of the non-league pyramid. 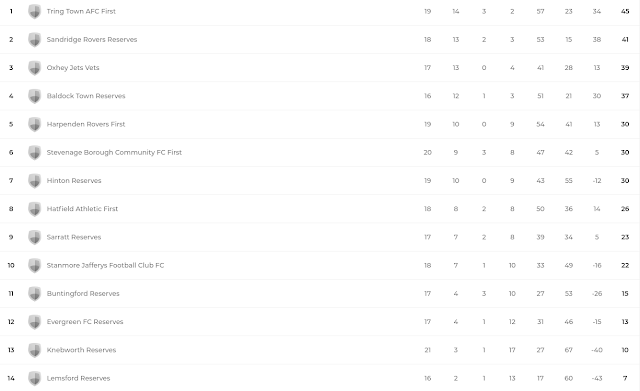 As well as Tring Athletic who play in the step 5 Spartan South Midlands Premier, the town is also home to Tring Corinthians who play in the Spartan South Midlands Division 2. The small market town of Tring has a population of just under 12,000 and was the birthplace of top-level referees Graham Barber and Graham Poll. The town is home to Tring Brewery which is based on the picturesque Dunsley Farm alongside a farm shop and cafe. Poet Edward Lear made reference to the town in his 'Book Of Nonsense'

There was an old person Of Tring
Who embellished his nose with a ring
He gazed at the moon
Every evening in June
That ecstatic old person of Tring. 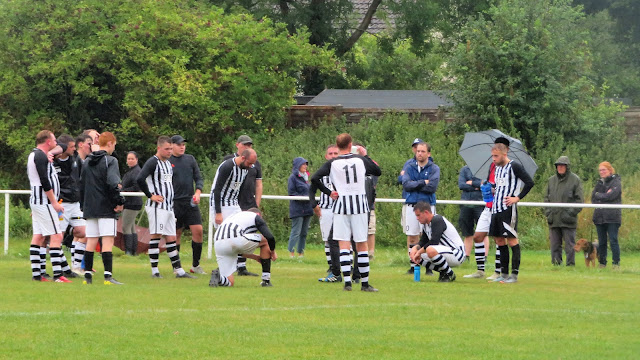 Tring Town's Miswell Lane had been on my radar for a while, what with it being fairly close to home and a fully railed pitch which had an interesting history. I spotted this fixture a couple of weeks ago when the current restrictions for spectators were put in place. I confirmed it would be my game of choice the previous Sunday when I learned that we'd be having family around the following Saturday and so I needed a game where I could leave as late as possible. I did my research into the club into the week leading up to the game, which was easier said than done, as the lower leagues are not as extensively covered. I had to use the Internet Wayback Machine to bring up some old websites, but eventually, I cobbled a history together but it was something I enjoyed doing. The week leading up to the game saw the hashtag #LetFansIn trending as various clubs, chiefly Dorking Wanderers grew sick and tired of the FA's lack of a coherent action plan to return fans to football. They'd had 4 months to come up with something that I did in less than five minutes and it turned out to be one of my most popular tweets with over 200 likes and 60 retweets. Our lazy guardians of the game had only put forward a plan to the DCMS to cover the top levels of the game - as usual, they treated anything with sub-four-figure crowds with contempt. It was left to the fans to point out that around 50 fans socially distanced was far safer than a packed beach, a crowded pub or restaurant and at odds with the fact that fans had long ago returned to watching cricket. 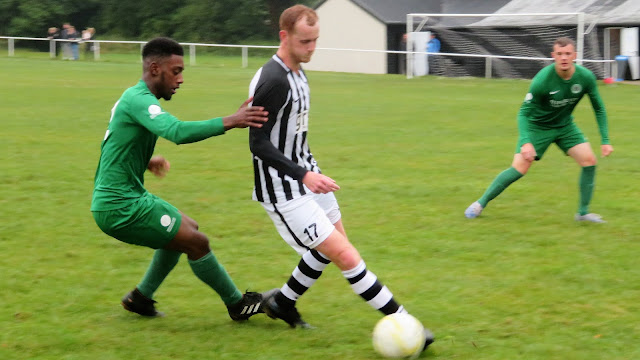 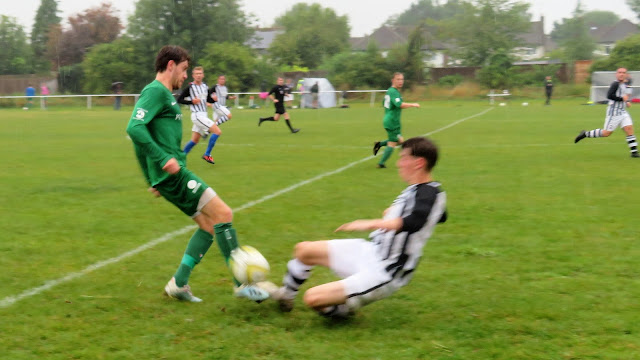 There was still not a murmur from the FA three days into the campaign, though this surprised absolutely no-one. I had a decent week leading up to the game. Seeing as my taxes were going towards the 'Eat Out To Help Out' campaign, I decided to take advantage of it. On my day off on Tuesday, I walked down to Wycombe and enjoyed a delicious half-price meal at Bluegrass BBQ. The smoking chipotle burger, hand-cut fries and US Grape Fanta was delicious and good value at £7.70 and I plan to have a meal every Tuesday for the rest of the month. The weather was great to walk down town in, but not too great to sleep in with it being hot and humid. There was also plenty of storms during the latter part of the week. I'd been back at work for around six weeks following time off during the pandemic and had enjoyed it at first. However, it had started to grate again, the general lack of gratitude when I was working hard being the main bugbear. Friday saw the end of the working week (well for one day) and a walk down the pub as usual. A couple of pints were enjoyed as usual and I managed to dodge the rain on my walk back. A couple more drinks were enjoyed in the evening, but I had an early night, going to sleep around 9. As a consequence, I woke up at my normal work time of 4 am. I watched YouTube videos to kill time. After getting up and having a shower, I started looking towards next week and found that Prestwood were at home against Watlington. With it being the only new ground that is walkable from home, it's almost certain I'll be there in a weeks time. I went for a walk to get some exercise, going out for 90 minutes and just about avoiding the rain. 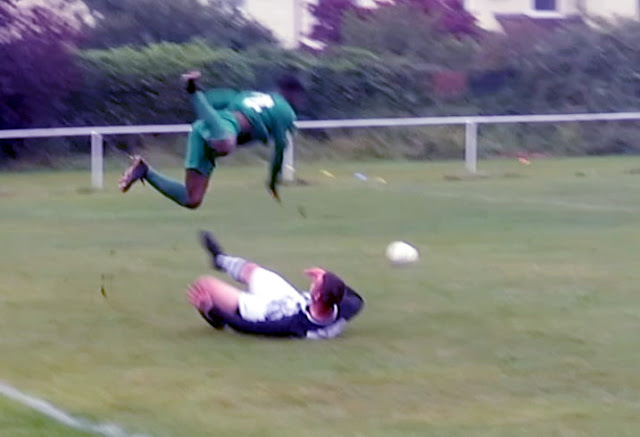 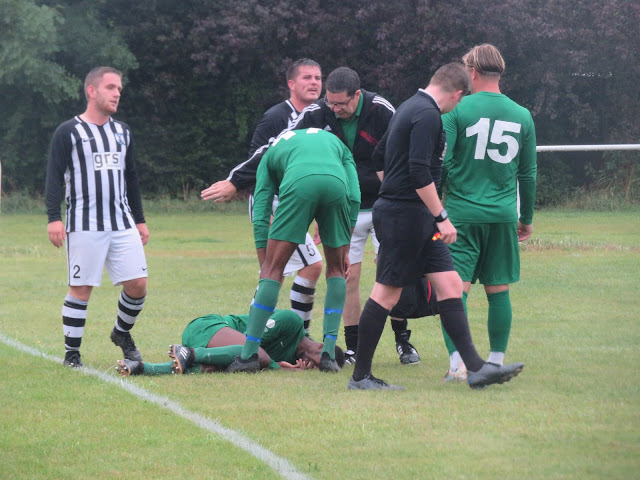 Bovingdon played at step 7 of the non-league pyramid and I very much enjoyed my visit to them back in 2016. This was their reserves side though and they played a step lower at step 8, namely the Herts Senior County League Division 1. They'd played there since the 2017/18 season with their debut year seeing them win the title. Before the curtailment of last season, they sat 6th in the table., the crowd growing throughout the afternoon. The first half had seen persistent rain but this thankfully subsided towards the end of the half. It was good to spend the afternoon in decent company and it was a shame to have to leave. It had been a good day, but I was disappointed not to have caught more of the action on video, especially the Tring goal. I left at 4.55 and was home by 5.20 having had a good journey. I spent the evening typing this blog and having a few cans of cider before winding down and going to bed fairly early. Sunday is never a happy day for me at work and I wanted to give myself a decent chance of an early night to try and make it as painless as possible. 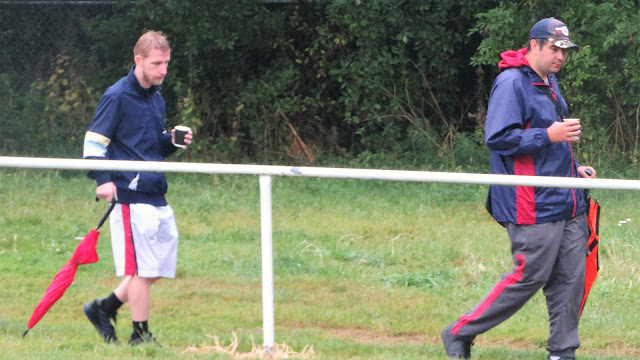 MISWELL LANE is a great venue for the level. There's a fully railed pitch with hard standing on two sides, though there is no cover. It's set in a pleasant are and has a basic bar offering drinks and snacks. The ground is in a largely residential area with only street parking, though it is on the main bus route to Aylesbury. Nearby are an Indian takeaway an off licence and a convenience store. 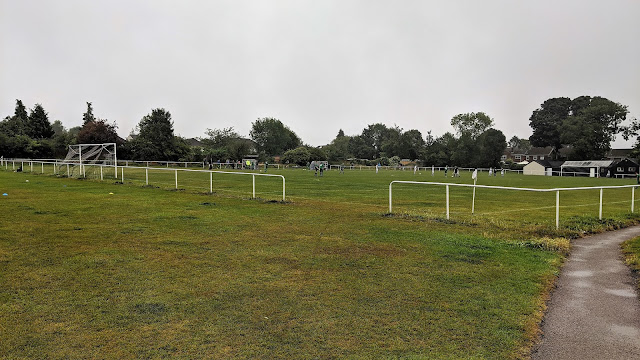 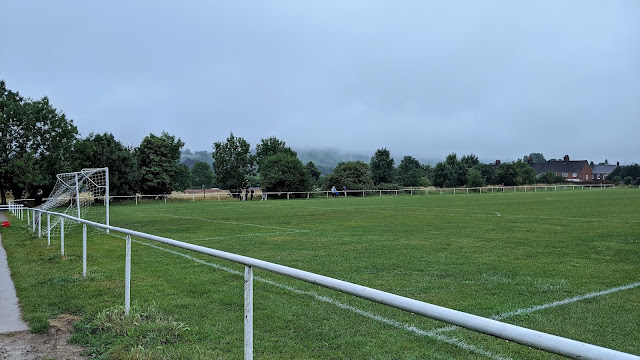 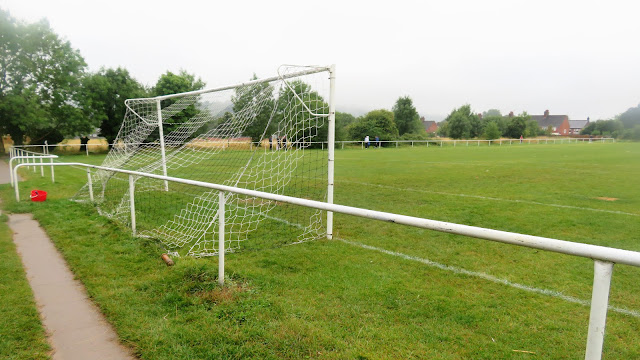 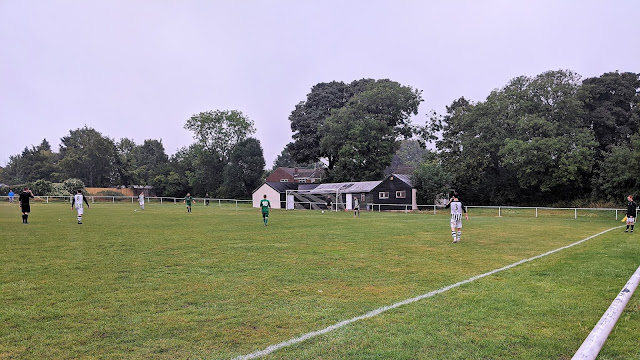 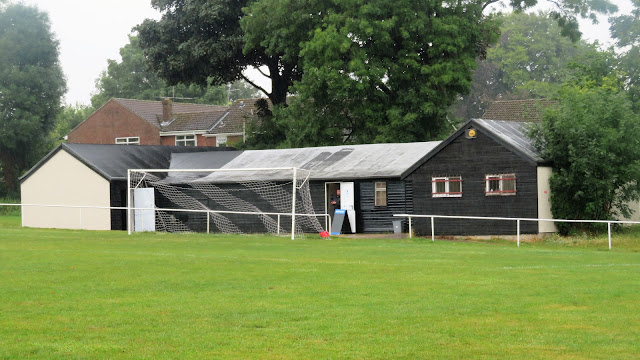 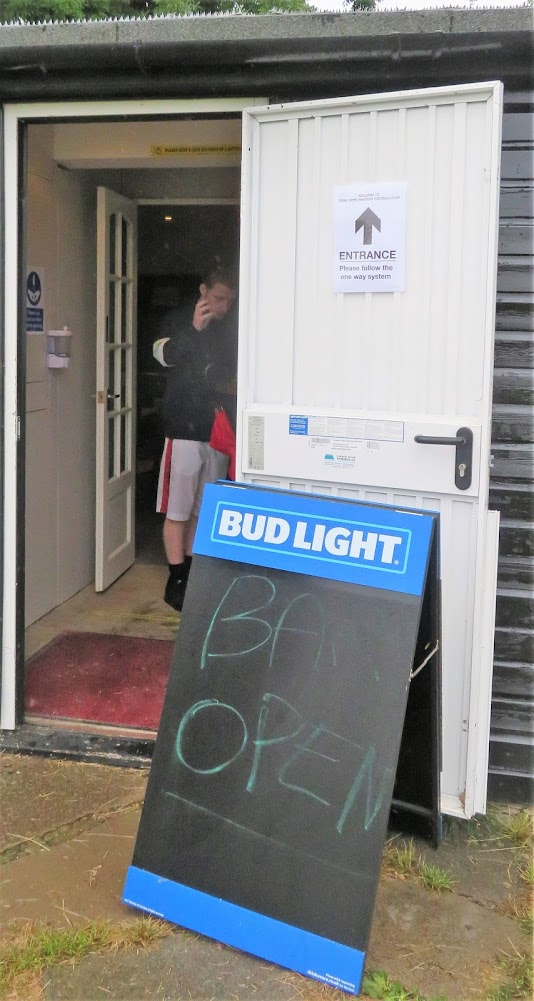 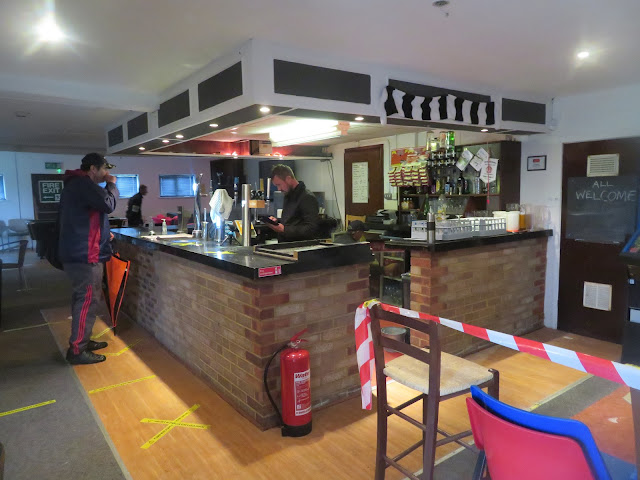 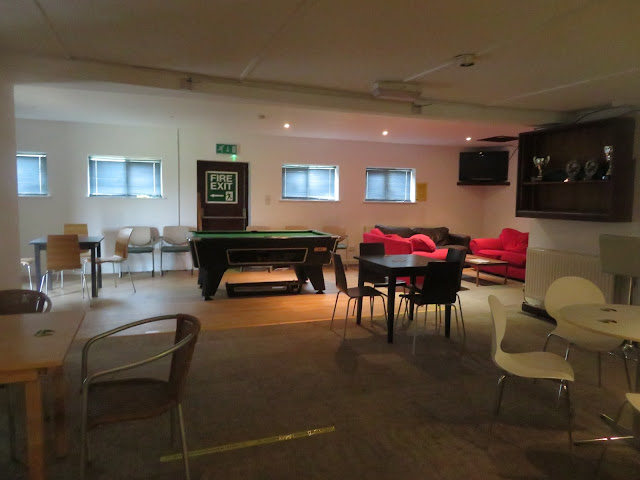 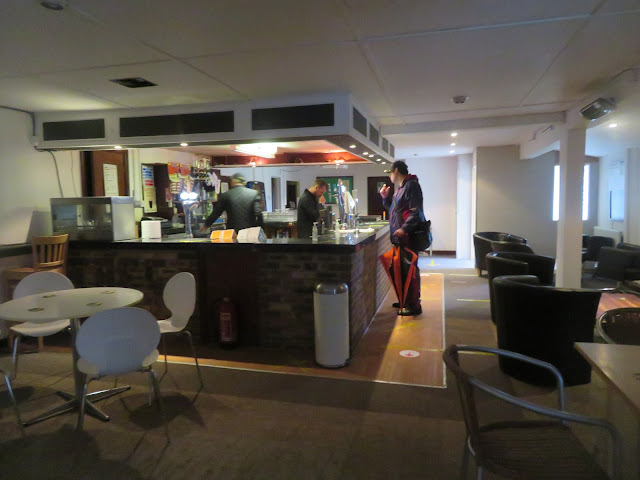 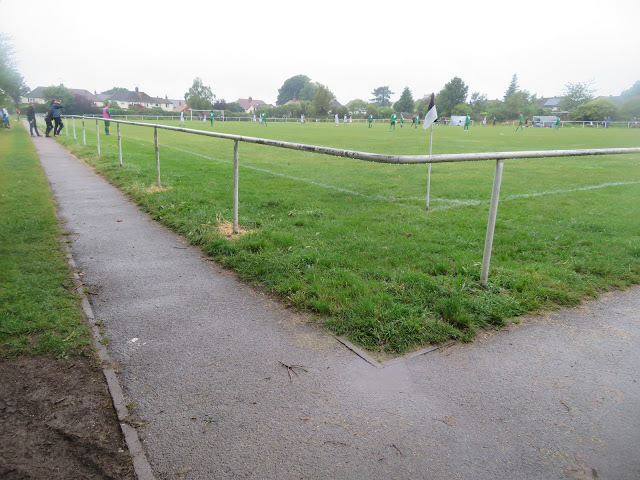 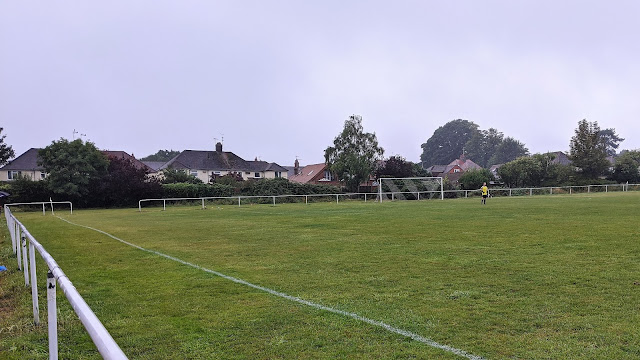 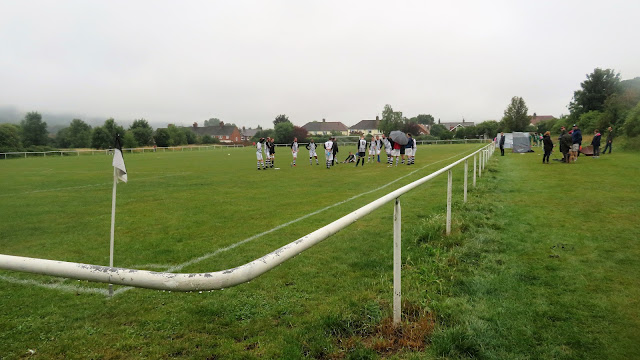