The club was established way back in 1887. Up until the first World War, they played only Friendly matches, then following the return to peace, they played in the Waterlooville & District League. They won the title four times here before upping sticks to join the Portsmouth League. Here they were Division 2 champions in 1954, gradually progressing up the leagues. After three successive Premier Division wins, they moved up to the Hampshire League in 1972. The mid to late 70s saw rapid progress with them winning Division 4 in 1975, Division 3 in 1976 and Division 2 in 1980. They spent six seasons in Division 1, finishing 3rd in 1986. That year, the club joined the newly-formed Wessex League. The single-tier league, as it was then, was a big step up and Horndean never once finished in the top half. After a bottom-placed finish in 1995. Horndean were relegated back to the Hampshire League. They remained in the top-tier with mainly mid-table finishes. After two successive 5th place finishes, the club rejoined the Wessex League in 2004, this time in it's second tier. A 6th place finish was good enough for promotion to the Premier Division in 2006, but again the club struggled and were relegated back in 2009. Two years later they finished as runners-up to Downton to return to the Premier Division. They've been there ever since on a much stabler footing, even finishing as runners-up behind Sholing in 2019 - the highest finish in the club's history. Before the season was curtailed in March, Horndean sat in 6th place in the Wessex Premier.

Horndean have not had a great deal of success in the FA Cup, reaching the 1st Qualifying Round on ten occasions, but never progressing beyond there. The club has twice reached the 3rd Round of the FA Vase - losing 5-0 to Bemerton Heath Harlequins in 2012 and 2-1 at Hamble Club in 2017. In terms of local cups, the Portsmouth Junior Cup was won in 1965 and the Portsmouth Senior Cup lifted on four occasions. A few former Portsmouth players have played for the club - namely goalkeeper Alan Knight, defender Robbie Pethick and attacker Ashley Harris. The village of Horndean sits 8 miles north of Portsmouth and has a population of just under 13,000. It was a base for British and Candian troops in Spring 1994 as they prepared for D-Day during World War 2. The village is twinned with Aubergenville in France and has a small shopping precinct including a cafe, takeaways and a newsagent. 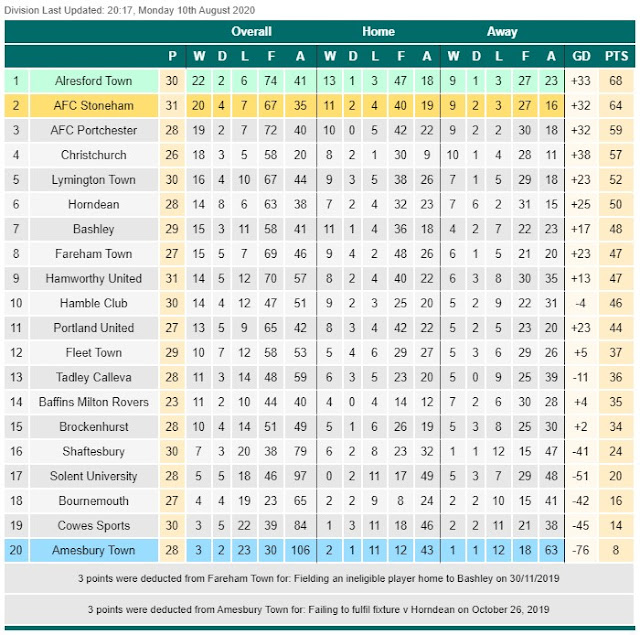 Following a long break with fans banned from football, the campaign to get fans in took a bizarre turn at the start of the week. A petition quickly reached 10,000 signatures meaning the government were obliged to respond. Now I am no fan of the current government by any stretch of the imagination, but they were not guilty on this occasion. Sport for players had been allowed to return in mid-July and in turn, the FA had said fans could return from the 1st August - but only at a certain level. The government and DCMS had stated that no spectators would be allowed to watch for the time being in the top 7 levels of football - this was what they considered 'elite sport. But the FA had misread it and interpreted it as the top 7 levels of non-league - throwing their toys out of the pram when a tiny knot of fans gathered in a park to watch football. You'd have thought that basic literacy would be a job requirement for a top job at the organisation that governs our game, but obviously not. With the woeful communication by the FA, clubs could have every right to sue them, and who knows, a couple of hundred people paying a fiver might have saved Droylsden who had to pull out of the NPL due to lack of finances. Even after getting all this wrong, they still put a limit of 15% of the minimum capacity requirements at whatever step clubs were playing at - so FC United with a 4,400 capacity stadium were only allowed 300 fans for now - just 7% of the capacity of their ground for a friendly against Barrow, despite compiling a 13-page risk assessment. The FA were also sticking to a Saturday start, despite them being in the wrong, they were still making clubs wait. Or so that was assumed until Friday morning when they gave some clubs permission to play on Friday night in advance of the Saturday games. Maybe there is some common sense, after all. 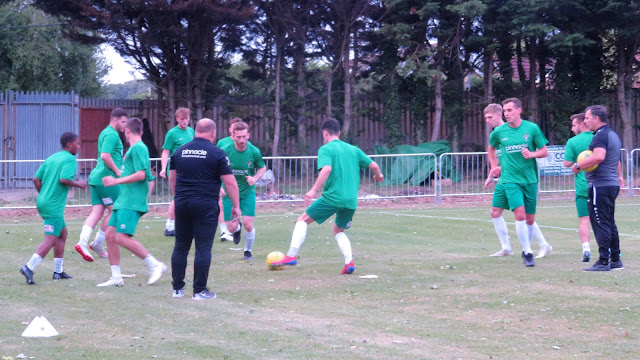 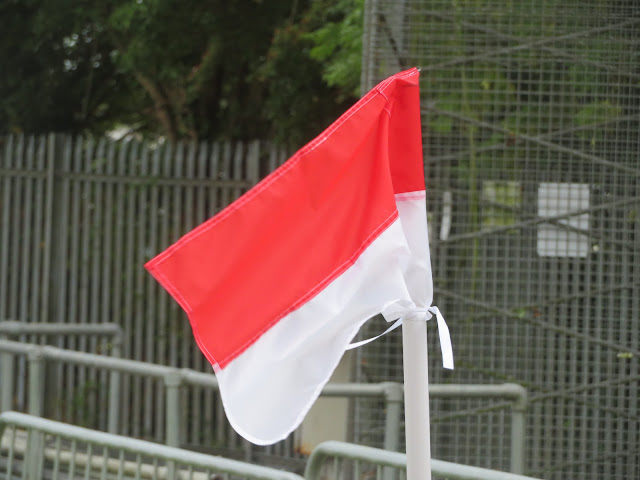 There were a number of great choices on the Friday night - namely Fawley, Horndean and Worcester Raiders amongst others but none wanted to incur the wrath of the FA by jumping the gun, so it was behind closed doors for the moment. It meant that instead of enjoying a healthy Friday watching football, I'd be having an unhealthy one having a few ciders. It looked to be a disappointing end to what had been a good, if football-free week. On Tuesday I'd enjoyed another half price #EatOutToHelpOut meal, having a delicious seafood pizza with a drink for just a fiver at Pizza 1889. It had also been a much more pleasant week at work, amazing how much a 'thank you' and a 'well done' boosts morale. It was a more tiring day at work on Friday, but it was an early finish, around 11 am. I took my break to be greeted by the news that Horndean were now allowing fans, thanks to my fellow groundhopper and Bognor Regis Radio commentator Lee for letting me know. I contacted fellow hopper Anwar who was up for the game and so I let my parents know that I wouldn't be in for dinner that evening. I came home and quickly researched the history of Horndean FC as well as route details and food options near the ground. I'd already started writing a fair-sized blog for tomorrow's planned game at Prestwood, so I cut and paste some of that into today's blog, which is why it partially has me making alternative plans. I spent the rest of the afternoon relaxing, before leaving at 3.25. I was going to stop for petrol, but I had half a tank full and it wasn't the cheapest, so I was with Anwar 10 minutes earlier than planned. I still had to wait until 4 for him and his son Hicham and we also picked up Thomas en route but we had plenty of time to spare. In the end, I found petrol at a reasonable price en route and so filled up. It was mixed journey down. It was all great until we got on the M25 then there was the usual slow spot around Heathrow. I tried to make up time on the A3 and have a nasty feeling I got done by the average speed cameras on the 50mph stretch, but I can't be sure. It would be my first 'offence' in four years, so it's not something I make a habit of. There was further delay on the A3 in Hampshire, meaning an hour was added to my journey with me getting to the ground at 6.45 after deciding against getting dinner beforehand. 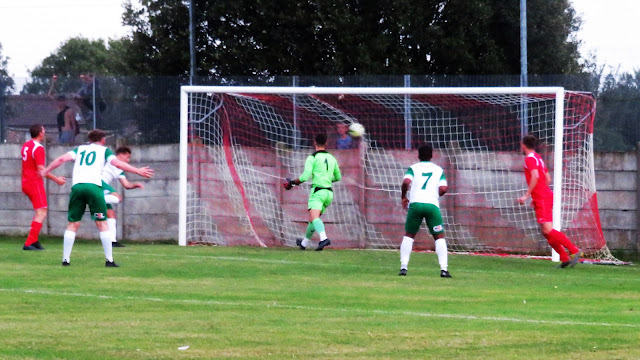 Bognor Regis Town played in the Isthmian Premier and were in 8th position when the season came to an incomplete end in March. I'd really enjoyed my visit to their ground back in 2012 when I'd seen a cracking 4-4 draw against Godalming Town in the playoff semi-final and sampled some quite superb bread pudding from the tea bar. They were around a 25-mile drive away, being based down on the South Coast. Entry was the usual £6 and it was a pleasant evening in a nice venue, albeit very windy. The visitors controlled the game from start to finish and were a very slick passing side. They were ahead within 3 minutes with a close-range finish by Jordan Parrish. The next notable incident was an injury to Bognor trialist Siph Mdlalose - a suspected ruptured Achilles that saw him carried off. The second goal on 22 minutes was a real beauty. A corner was played short, then after a marvellous turn, the ball was laid back for Ashton Leigh to blast a curling shot into the top left-hand corner from just inside the area. I was lucky enough to capture it on video. The scoring was completed on 29 minutes, a low shot from Will Stone. The rest of the first half saw heroic defending and great goalkeeping by Horndean prevent any further goals. The second half saw a huge change in players and so the game was played at a more relaxed pace. The home team's more direct style saw them create few chances but they kept battling until the last whistle. Not the greatest game, but an enjoyable evening spent in good company

It was a good thing I had got there early as a few people were forced to watch from outside due to the 150 limit being reached. Everything was managed really well with track and trace details taken. Though it beggars belief that with the mass takeup of smartphones, it can't be automated, though I guess it's down to privacy fears. It was only the second place that I've had to submit details and the only one that had it as a condition of entry. The game was finished around 9.40 and as everyone was famished, we stopped for food. I wasn't hungry myself, but with a long drive ahead of me, I thought I'd better have something. I opted for my usual favourite of salt and chilli chips. The portion was £3.80 but was enormous, meaning even a greedy sod like me couldn't finish them. They were some of the best I've had, so I saved them to reheat later. Once everyone had eaten and we'd walked back to the car, it was 10.30 by the time we left. We made good time on the way back, though all within the speed limits, of course. Union Jack radio provided the soundtrack and it made the journey pass quicker, the only real drawbacks being the reduced speeds where works were being carried out. We went the long way round, taking the M25 and A41 into Aylesbury, but it was a much nicer route to drive. I dropped everyone off around 11,45, getting home myself around half an hour later. I had a couple of cans as I typed my blog and caught up on things, going to bed around 4 am, having stayed up around the clock. 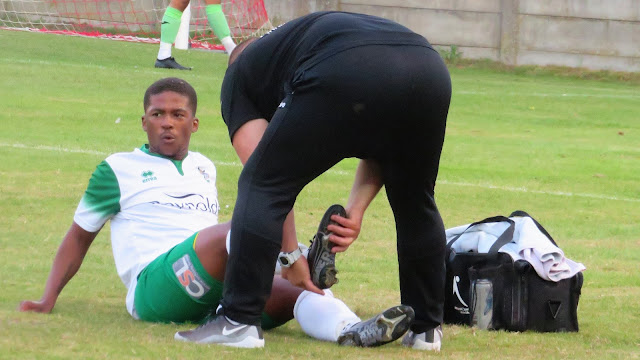 FIVE HEADS PARK is a quaint little venue. All the covered accommodation is on one side with a proper brick built 50 seater stand and additional cover in front of the dressing room area. The rest of the ground is open flat standing with one goal closed off due to lack of space. There's a tea bar offering burgers, bacon rolls, drinks and snacks. There's also a bar outside serving a reasonable range of drinks. The town is around 20 minutes walk away and has a number of pubs and takeaways. The Lucky House Chinese was very good and one of the better ones that I've visited. 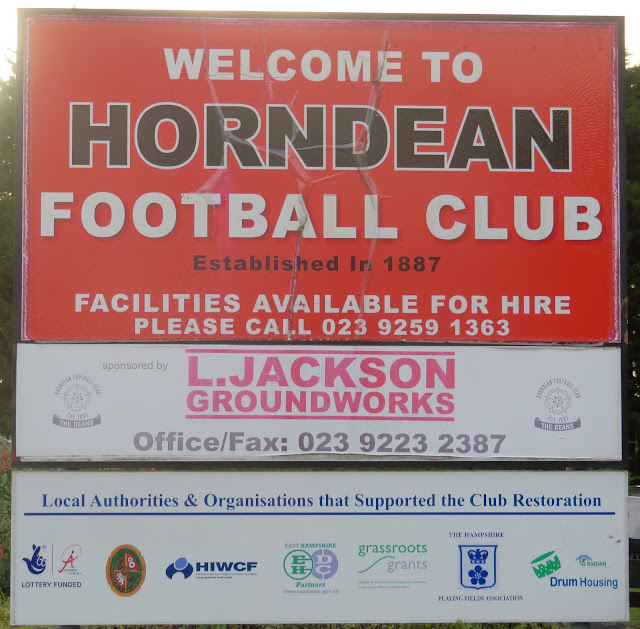 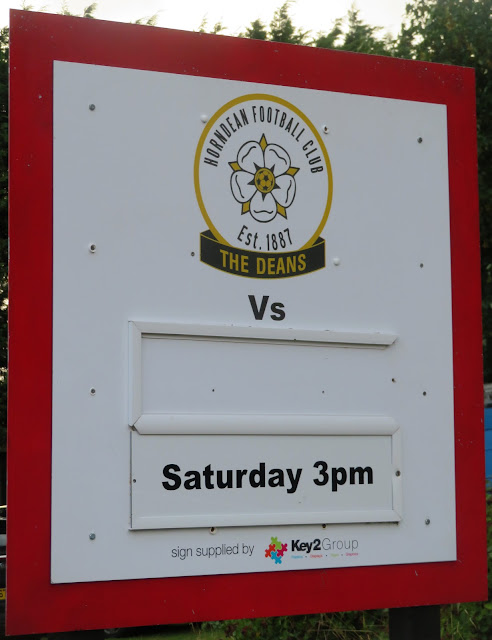 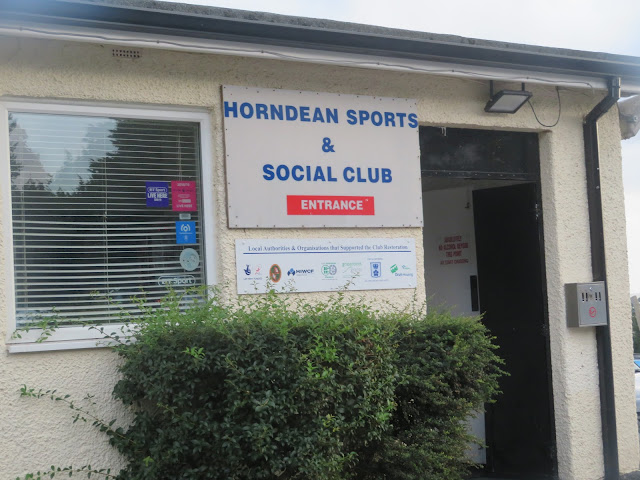 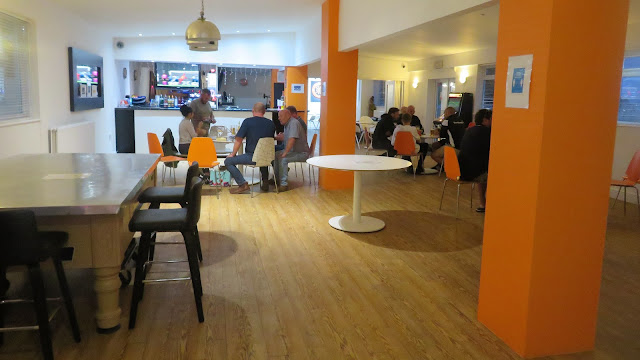 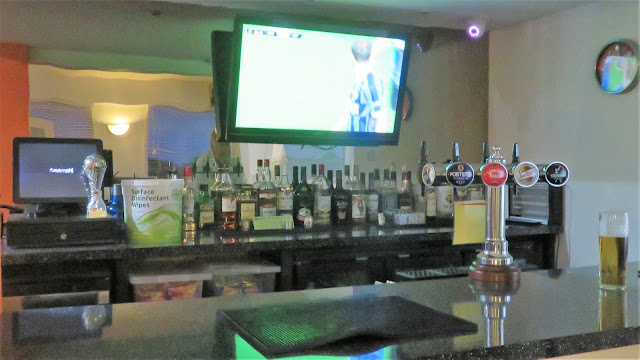 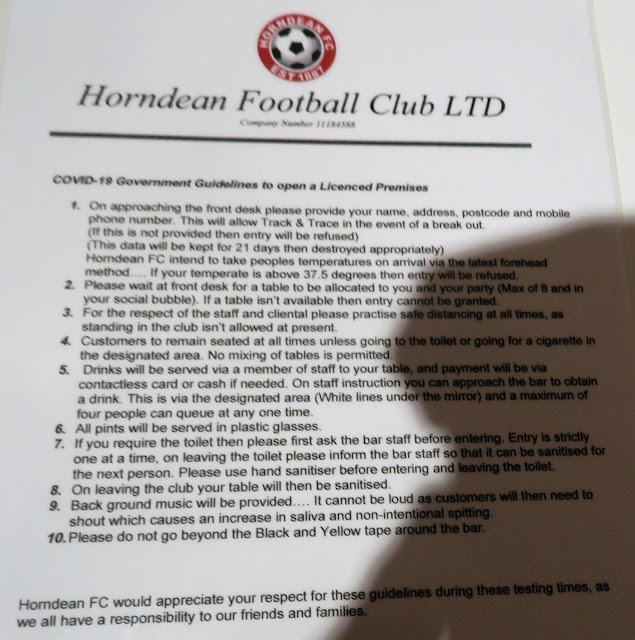 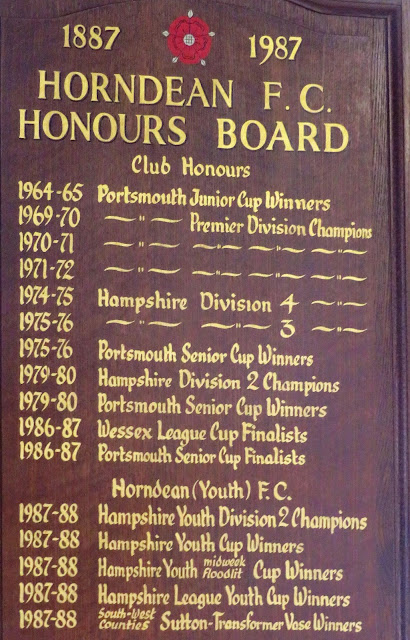 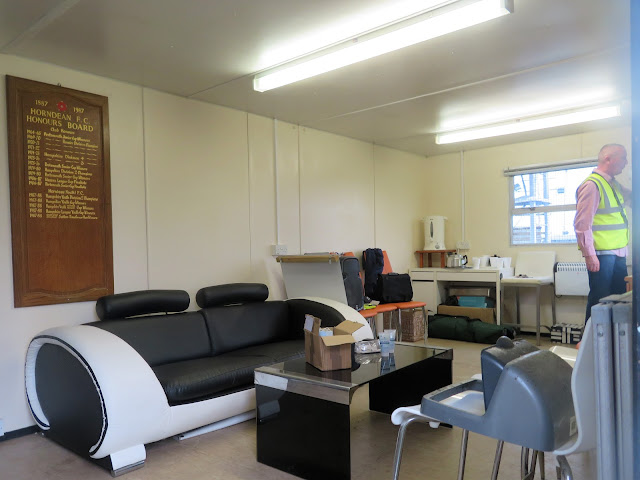 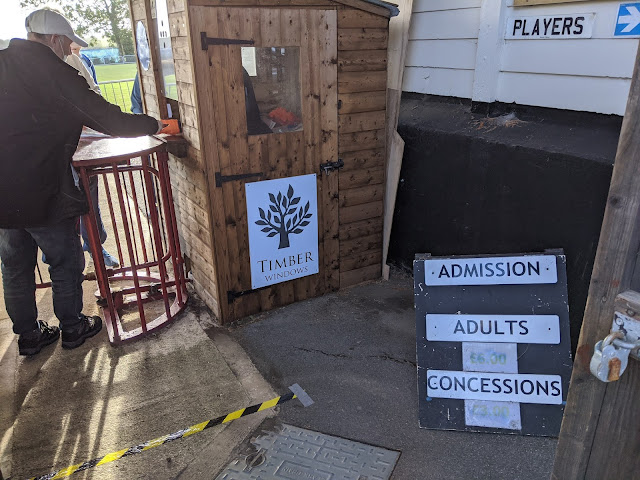 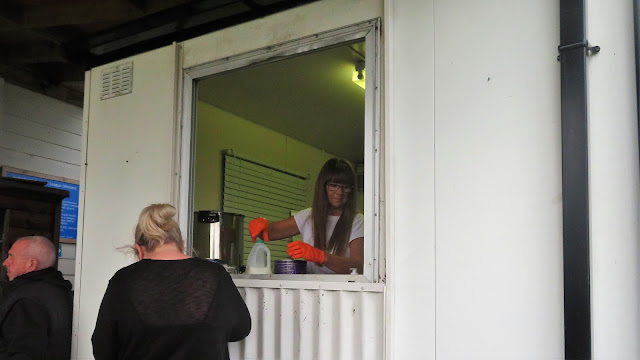 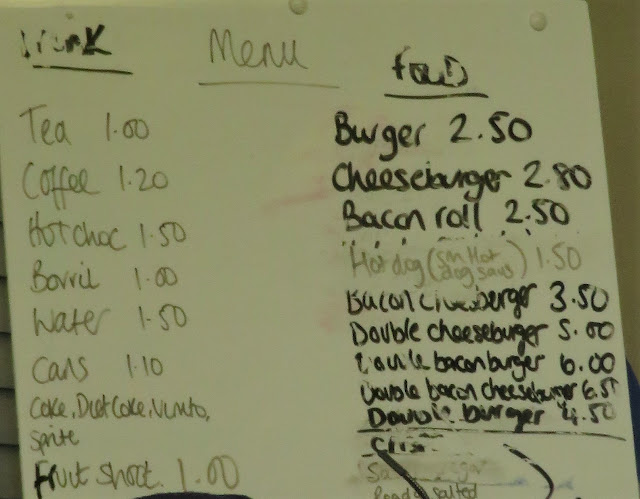 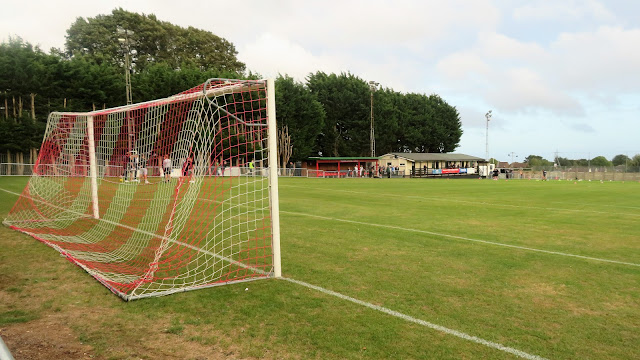 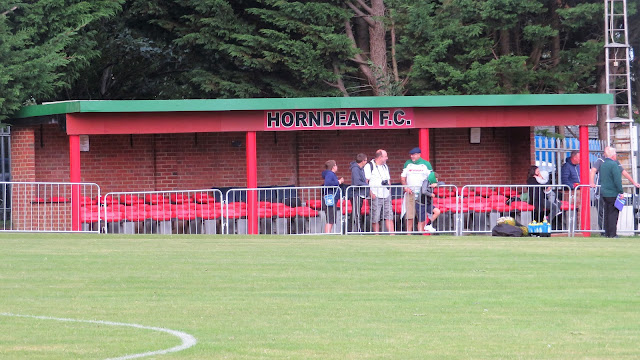 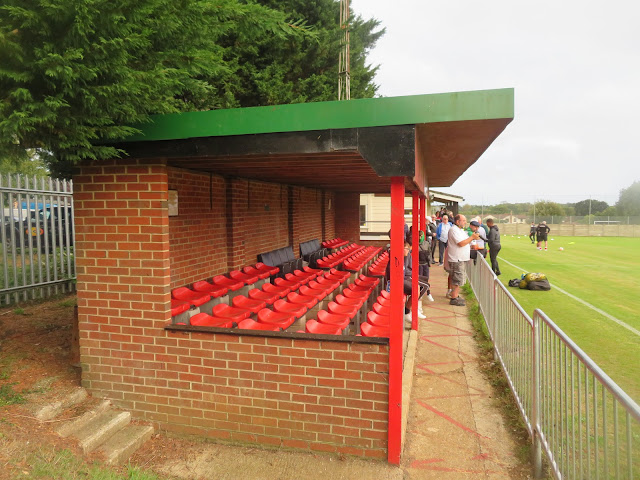 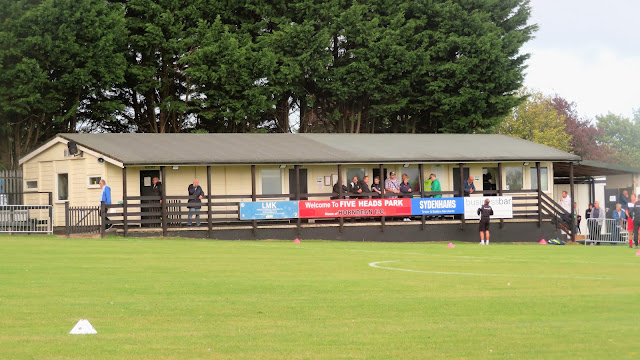 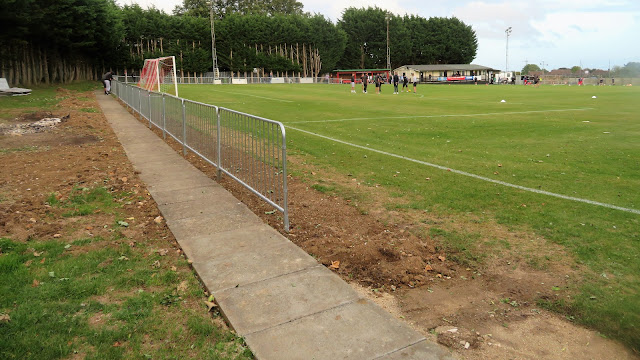 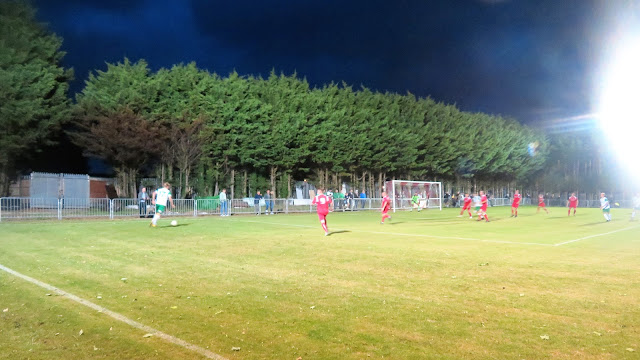 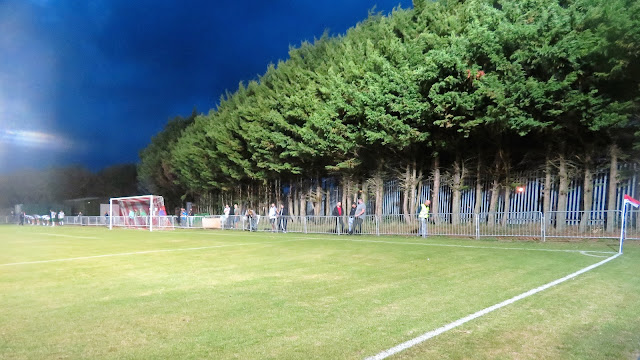 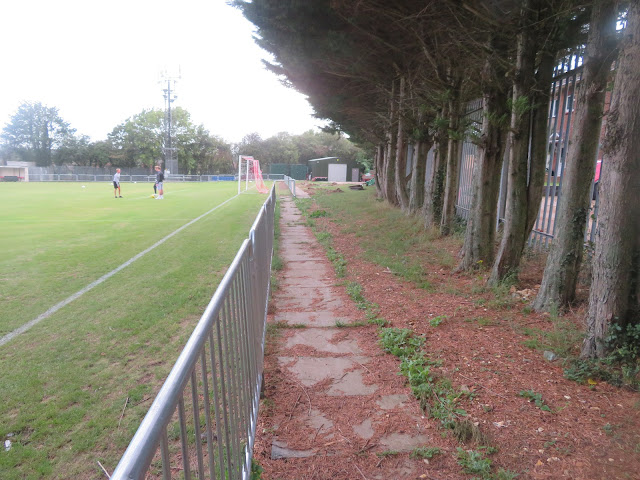 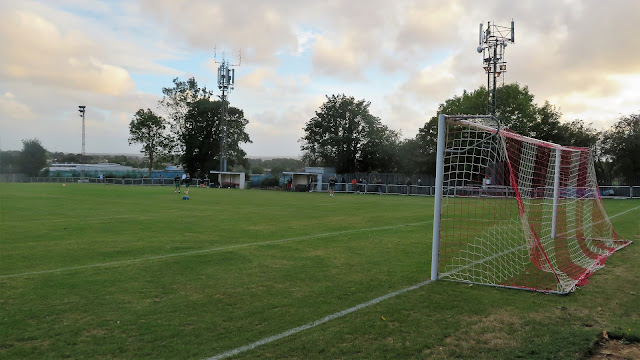 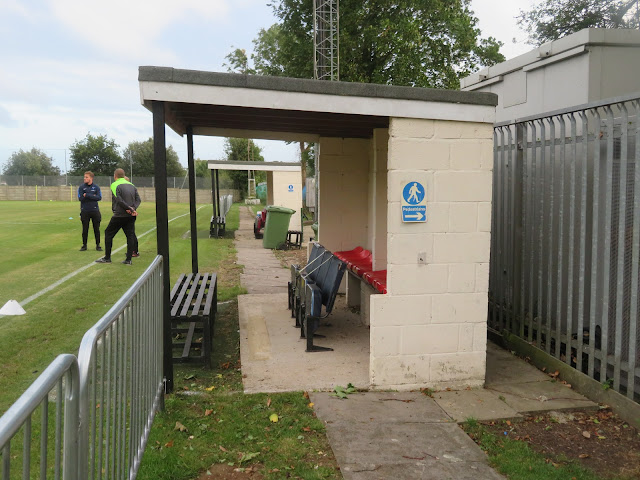 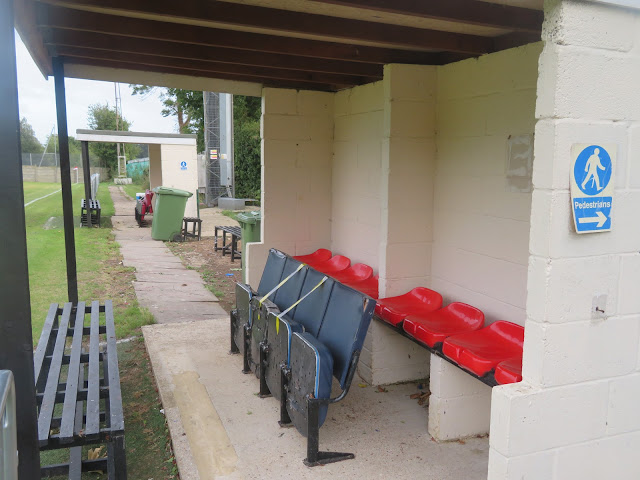 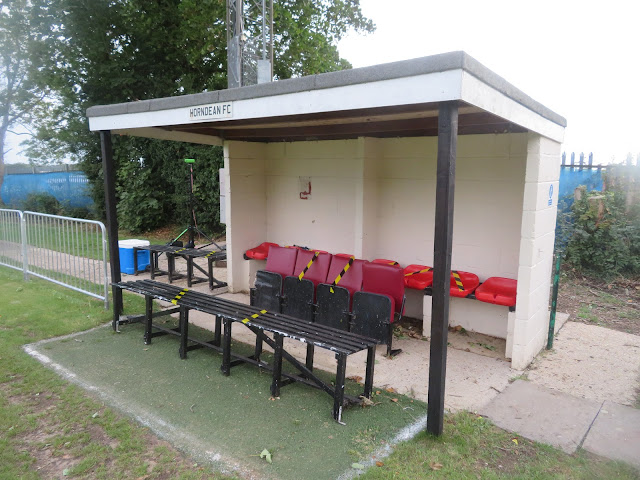 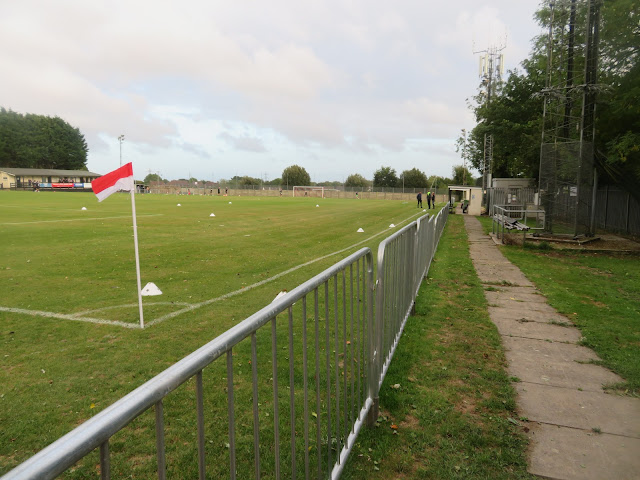 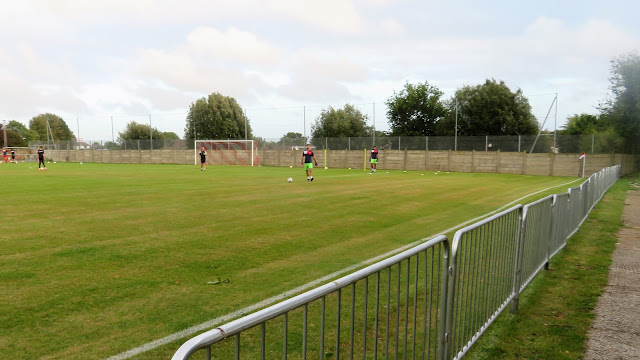