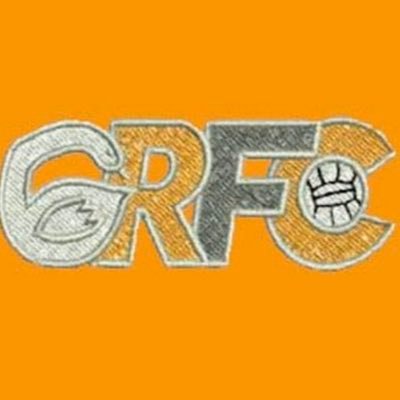 The club was established in 1947, joining the North Bucks League in 1952. They were Premier Division Champions in 1974 & 1975. In 2013, they made the step up to Spartan South Midlands Division 2 and remained there for six seasons, their best season being their final one in 2018/19 when they finished 7th. However, they resigned from the league just before the start of the following season and took their reserve side's place back in the North Bucks & District League. Last season they were 4th in the Intermediate Division which sits at step 9 of the Non-League pyramid before results were declared null and void due to the Coronavirus pandemic. Local cup honours include the Twyford Shield (1951, 1974, 1975, 1977), North Bucks League Cup (1962, 1970), Buckingham Charity Shield (1962), Ray Porter Cup (1974), the  North Bucks Premier Trophy (1977) and the Saye and Sele Trophy (2019).

The club is based in the village of Grendon Underwood which is halfway between Aylesbury and Bicester. According to the 2011 census, the village has a population of 1,625. In 1642, it lay on the forest tracks used by gypsies and travelling performers and was on more than one occasion, visited by William Shakespeare. However, it's most famous resident was Sophie Dahl, mother of Children's author Roald. He returned to the village after fighting in the second world war following expeditions in Africa and Greece. Local facilties include a school, a pub and two prisons for B-Grade and D-Grade prisoners. It also hosts the biennial GrendON festival featuring live tribute acts and a selection of real ales.

Having seen a few pictures of their ground, Grendon Rangers were a team I'd fancied visiting for a while, but it was always going to be done in the warmer summer months. This weekend happened to be ideal. The vile dictators at the FA had initially banned spectators at step 1-6, but having seen people enjoying a socially distanced game of football at various step 7 grounds, they got in a huff, stomped their feet and shut that avenue too. I doubt they understand what 'step 7' means, probably thinking it's a catch-all term for grassroots football. Any smattering of fans was down to them closing off choices, meaning that football starved fans had even less choice of games to go to. Nevertheless, the games I attended at Basildon Town and Earls Colne saw 'social distancing' respectfully observed and saw people enjoying a good day out. I'd decided this fixture well in advance and was glad that the hosts sat at step 9 of the non-league pyramid so there were no issues with attending. It was a relaxed week leading up to the game and I was supposed to be visiting Harrow Hill v Stonehouse Town on Friday evening. However, the FA's diktat came through on Tuesday and with the home side asking fans to respect this, I did so. I took my usual walk down town in blazing heat and had a couple of pints in the Rose and Crown as per usual. Sitting in what had become my second home (besides work) with no football, I scrolled past endless pictures of packed Brighton beaches - this seemingly OK with our vile government and simpering FA who really do not understand football outside the top levels. 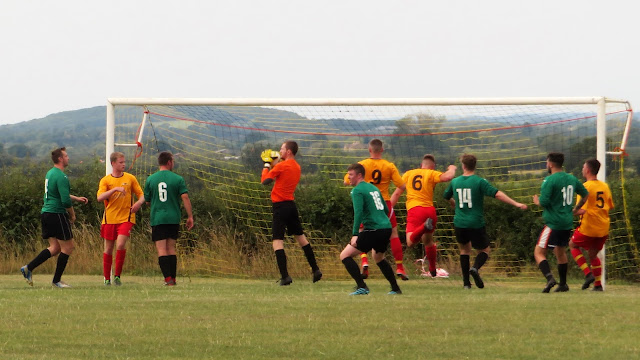 My Friday evening was a night in. I watched Corrie - the current story reflecting real life with Geoff as the tyrannic and out of touch government and Tim as the gullible and accepting FA with not a clue what is going on. I spent the rest of the evening having another couple of pints, but generally, it was sensible and I was asleep by 10. I woke at 5 am as I usually do, but managed to get another couple of hours sleep before finally getting out of bed. I caught up with old jobs including sending some parcels on eBay before going out for exercise just before 10. I spent about an hour out before coming back and ordering some presents for my brothers birthday before leaving at 11.30. There was a tiny bit of traffic when on my way, but I was with Anwar and his son Hicham by 11.55. From there it was a couple of stops, including Lidl. I was hoping to pick up some of their cider for the evening, but they had sold out. At least I got some lunch which consisted of a goats cheese focaccia, a pretzel, a cookie and a bottle of cherry fruit drink, under £2 for the lot. It was an annoyingly long queue though and we didn't get away until 12.30. It was just over 20 minutes to Grendon Underwood. By the time I'd parked up, I got to the pitch with 5 minutes to spare and caught up on Twitter. I eat my lunch as the game started. 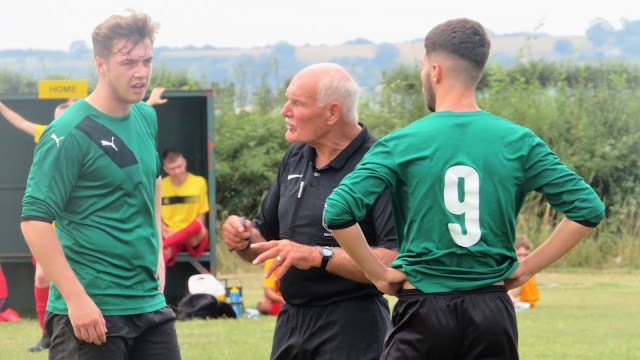 Opponents Yardley Gobion played in the North Bucks and District Division 1, the same level as the hosts. Whereas Grendon had finished 4th, the visitors finished in a mid-table placing of 8th before the plug was pulled on football. It looked like they had been relegated from the step 8 Intermediate Division at the end of 2018-19 but missing records made that impossible to confirm. Either way, they'd be facing a 20-mile journey from their home village which was just to the south of Towcester in Northamptonshire. The village is most famous for featuring on kids TV show 'Blue Peter' when in 1978 the show visited a breeder of St Bernard's dogs in the locality. The hosts lined up in their usual gold home shirts and red shorts whilst Yardley Gobion were in dark green with black shorts. The pitch had a slight slope to it and Grendon were shooting downhill first half. The hosts had a chance in the opening minute when #11 forced the keeper to spill the ball but put the follow up wide. 16 minutes had elapsed when Yardley Gobion had their first real chance, they forced a good save out of home keeper Ryan Carter but the resulting corner came to nothing. There was a minor fracas which led to the referee shouting at a couple of players to 'pack it in', like a teacher telling off kids. A couple of minutes later the visitors' #9 got away from the defence but slotted the ball narrowly wide of the right-hand post. Grendon took the lead after 28 minutes, a good ball was put across and Ewan Bernard slotted home from five yards out. Yardley Gobion were still got out of it though and four minutes later, they forced a good save out of the goalkeeper. The second on 48 minutes was scored by Will Young who rounded the goalkeeper and finished from a few yards out. The third came on 76 minutes, a great cross was put in from the left and Olly Moyles headed firmly home to seal the game. Grendon could have had a 4th soon after but the shot from 25 yards went narrowly over. Yardley Gobion had a couple of free-kicks towards the end but it was fairly comfortable for the keeper to deal with.

It was just before 3 that we left. I drove back to Aylesbury and dropped the lads off. I was back home just after 3.45 and started sorting out my photos and typing my blog. It hadn't been the most amazing of games, but for a friendly, it wasn't too bad. Everyone had been able to socially distance despite the options being reduced further by the authorities, but who knows what next week will bring with these maniacs in charge. In any case, I knew of one further hopper that was at the game with the rest of the attendees being locals and players family and friends. Early favourite for next Saturday is Tring Town v Bovingdon Reserves which would complete my hat trick of Tring clubs, though I've not had confirmation from them that they are welcoming fans yet. 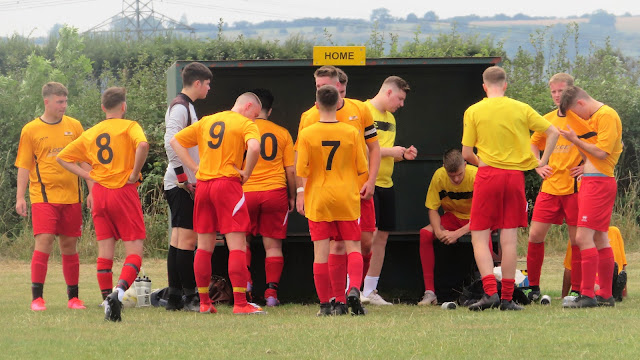 The ground is a decent little set up for a step 9 club. There is no rail around the pitch but there is a set of dugouts and a small covered area, capable of holding around 20 people. There are benches for 10 to sit down too. The main building didn't have much going on when I was there but it sometimes does hot food and has a bar. Otherwise, there's a local pub called the Swan which has a good reputation for food (though it looked fairly pricey). There's also a village shop. In any case, it was a good place to visit, what with the restrictions in place. 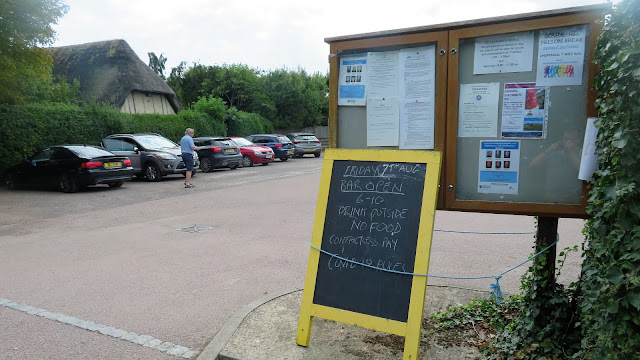 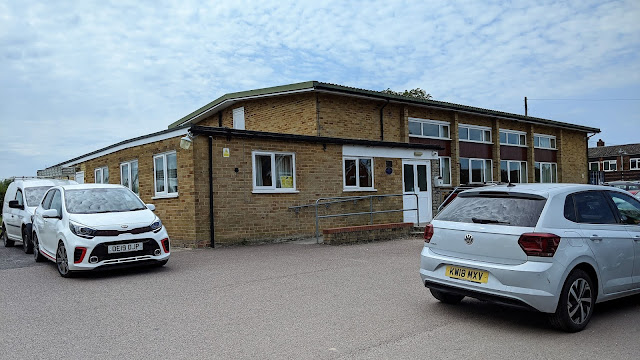 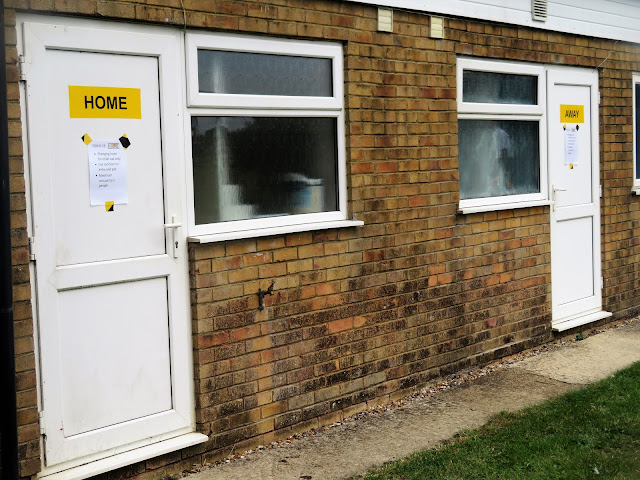 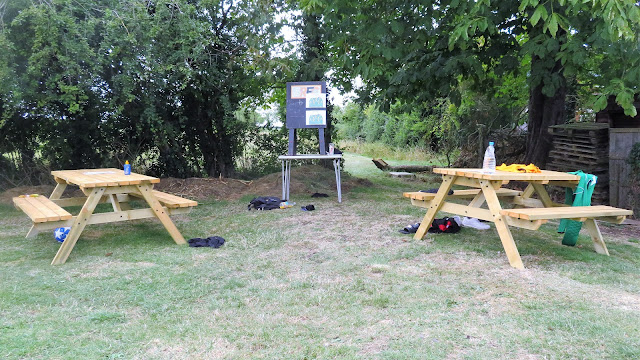 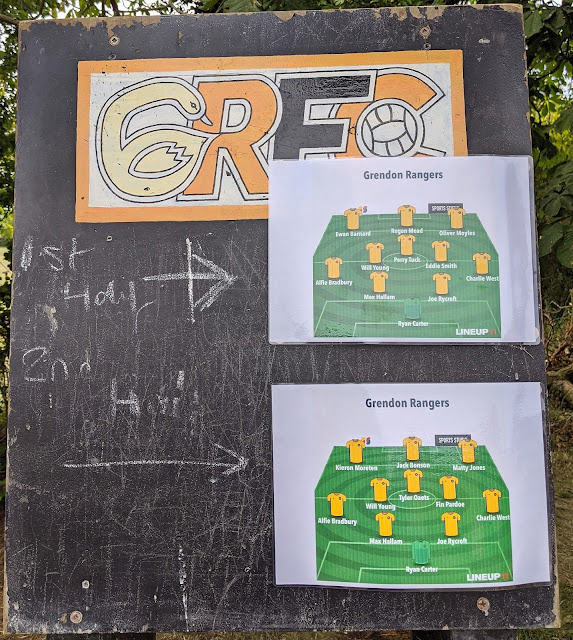 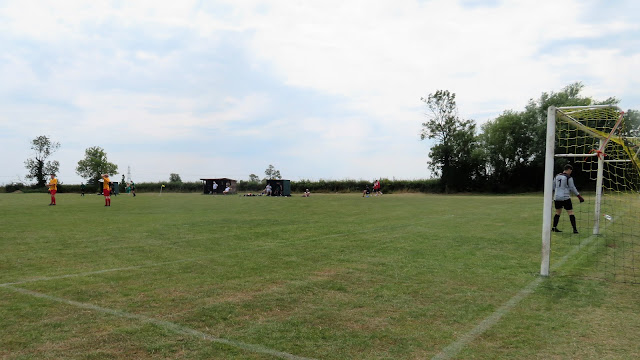 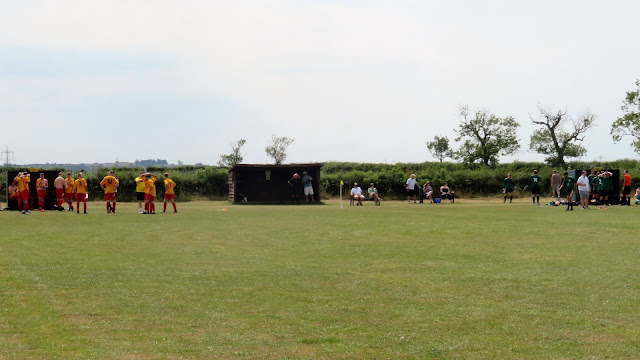 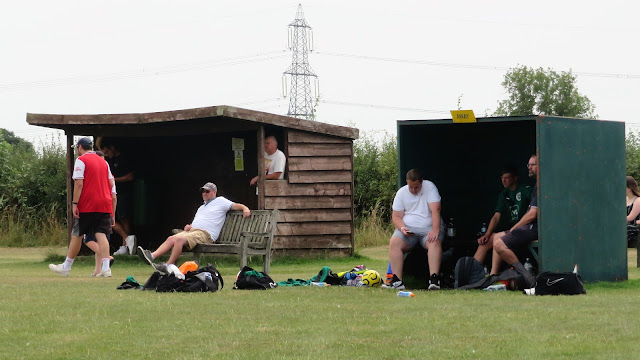 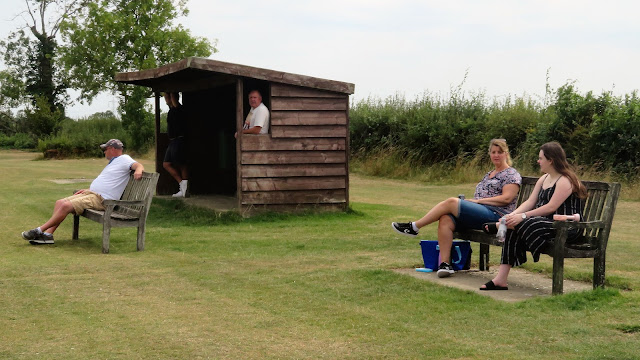 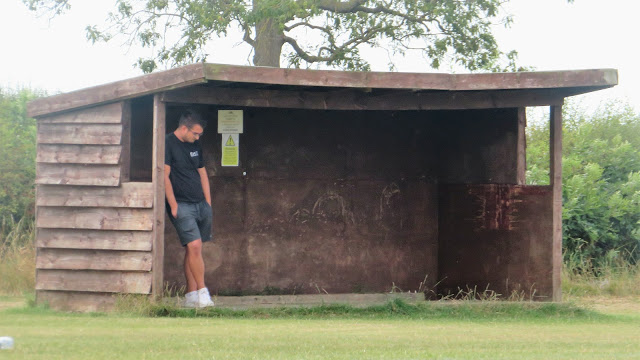 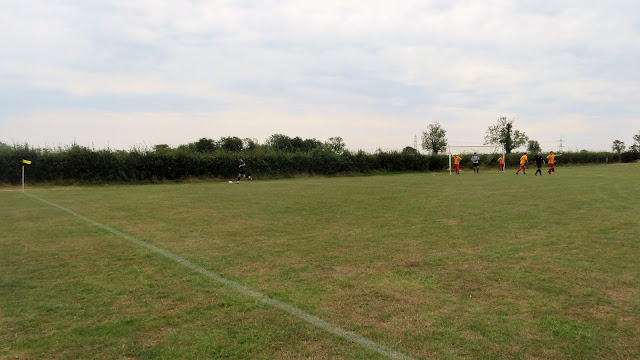 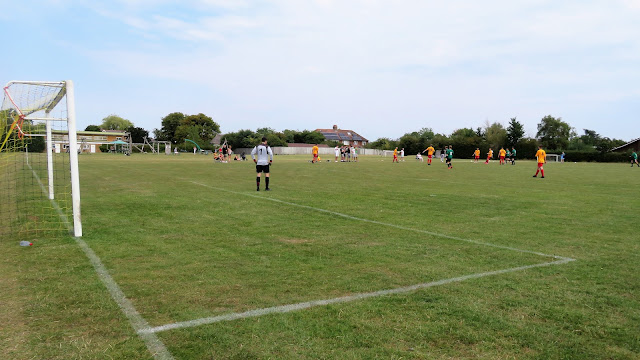 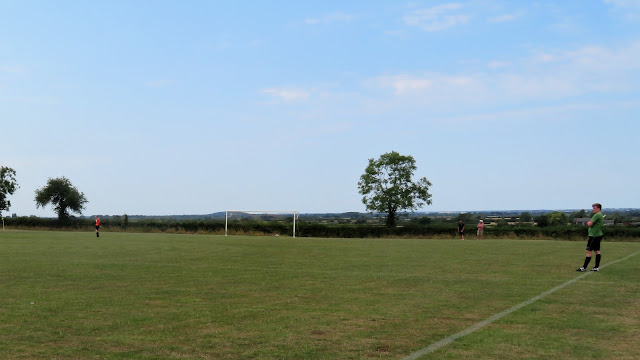 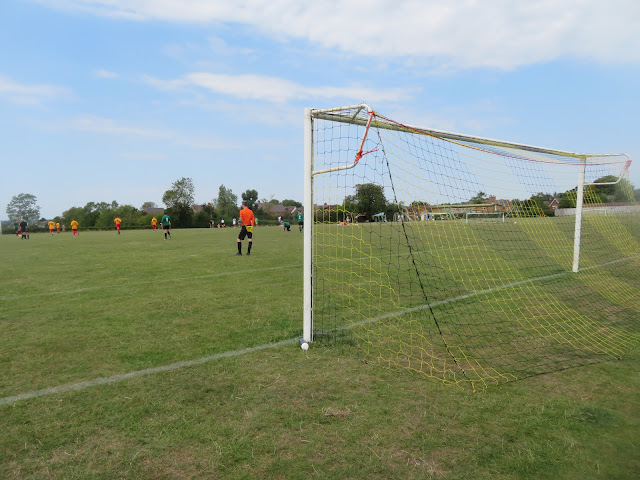