The club was established in 1934 and spent their first couple of years playing in the Princes Risborough & District League which they won in 1936 before departing. They then moved to the Wycombe and District League where they were Division 2 champions in 1937 and top tier champions in 1952 and 1982. In 1984, they moved to the Chiltonian League. The league was 'off-pyramid' and Prestwood had a bright start, even finishing 3rd in 1987 behind Coopers Payen and Sandhurst Town. Results tailed off once the 90s came around but despite finishing bottom in 1993, the club would spend the entirety of its time here in the top-tier Premier Division. The league was swallowed up by the Hellenic League in 2000 and Prestwood would spend ten years in Division 1 East. Despite a decent 8th place finish in 2002, Prestwood generally struggled. They lasted until November 2009, resigning mid-season with no wins and citing lack of players and finances. A large factor in this was the takeover of their complex by a commercial company between 2001 & 2003 meaning that they could no longer hold events or fundraise. They rejoined the Wycombe & District League at the start of the following season and were runners-up in 2012.  They remained in the top tier for the entirety of their second spell and were champions in 2017 and 2018. The league was disbanded at the end of the following season and so in 2019/20 joined the Aylesbury & District League. Prior to the abandonment of last season, the club was sitting in the top half of the table.

Due to their rudimentary facilities, the club never got to play in the FA Cup or FA Vase. They have won a few local cups though - including the Chesham Charity Cup in 1952 and 2002, the Wycombe & District Tom Hooker League Cup in 2016 as well as a couple of cups for their reserves. The village of Prestwood has a population of 8,000 and is 2 miles from Great Missenden and 8 miles from High Wycombe. Former Prime Minister Clement Atlee lived in the area from 1950. In 2007, a new park was built on Prestwood Common and was opened by the then Prime Minister's wife Cherie Blair. In 2012, David Cameron took part in a fun run at the Sprinters Leisure Centre. Sice 2012, the village has had a brewery called Malt which produces locally made ales. There is also a chippy, an Indian takeaway and a pizza place as well as various shops nearby. 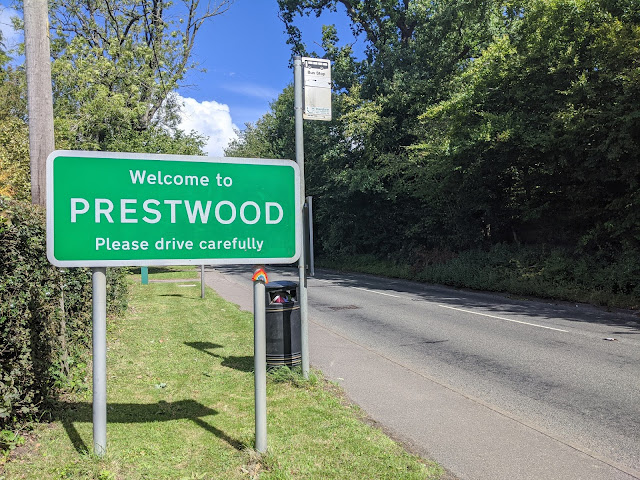 What with it being the nearest unticked ground and just about the only ground I could feasibly walk to, Prestwood had been on my 'to do' list for some while. It was easier said than done though - what with the club having no Twitter account as it was geared towards players who pay to play, rather than fans who pay to watch. The original plan was to keep an eye out for fixtures towards the end of the season, but what with it ending early, the opportunity was gone. I did drive up to the ground in March to check it out and was satisfied that it was worth a visit. The problem was finding fixtures and confirmation of venue but a quick Twitter search pointed me to Watlington Town's Twitter who confirmed to me that that had a game against them the following Saturday. Straight away I planned it in, knowing that it would be a cost-effective day out for me. I nearly played for one of Prestwood's junior sides back in 1994. I turned up for one of their training sessions and had a great game, most unusual for me as I am completely terrible at football. I got on well with all the players and a glistening football career beckoned. Sadly, due to a heart condition that was discovered the following Friday at John Radcliffe Hospital in Oxford, I was barred from doing any physically intensive activity, leaving my teams in tatters. I should be grateful really, my health gives me no issues whatsoever, aside from having to shield for a few months during the Coronavirus pandemic. 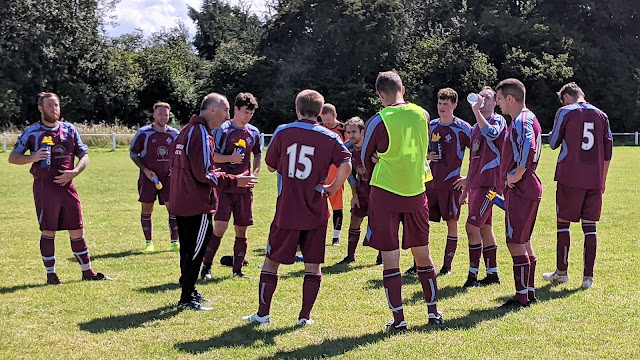 The night before, I confirmed the game was on and the location of the game. It turned out that it would kick off at 1 PM instead of 2 as Prestwood were planning on having two games. I did briefly consider cycling to the game and getting a double in, but in the end, decided against it. The Watlington Town twitter account was very helpful in any case and with them having a partially railed pitch, it's one that I'll look to visit in the future.  I had a late night the day before and so woke at 9.30 after a 5-hour sleep. I had breakfast and a bath and double-checked that there had been no late changes, but with everything looking good, I left at 10.45 and a few minutes into my walk, it started to rain, though only drizzle. This soon gave way to bright sun with the Bootlegger show podcast keeping me entertained along the way. It took longer than I expected and I got into Prestwood at 12.15. After stopping at the Prestwood Plaice chippy for some chips (£2.10 for a decent portion) I made my way to the ground, arriving at 12.40. I was a bit concerned about the sparsely populated car par, but happily, when I got pitchside, both teams were warming up. I caught up online as I waited for the game to start and it was a pleasant sunny day for the most part, save for a period of drizzle around halfway through. 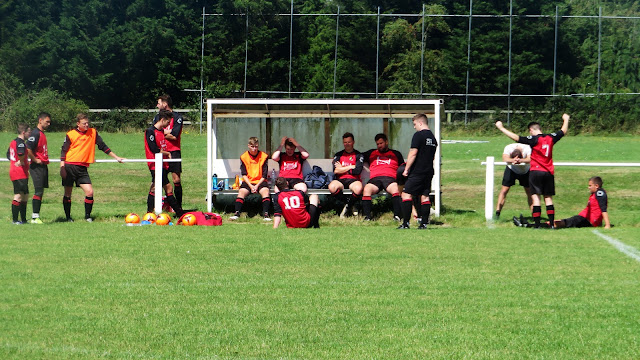 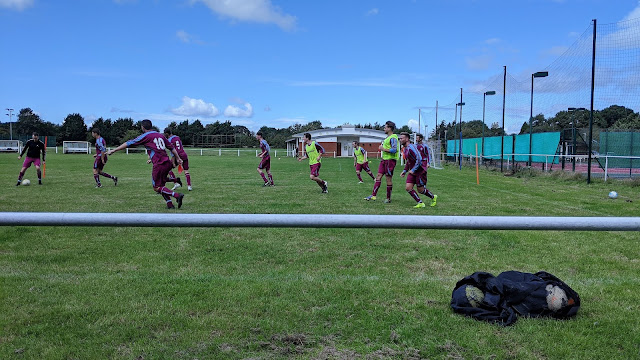 Watlington had travelled around 16 miles to get to today's game with them being based in Oxfordshire, not far from the Bucks border. They played in the Hellenic D2 East which sits at step 7 of the Non-League pyramid. Last season they competed in the North Berks League Division 1, finishing 4th in a league which is at step 8 of non-league. The two teams had opted to play three 30 minute periods. Prestwood lined up in claret and blue with Watlington Town in red and black. The visitors were much the stronger side in the opening exchanges and they took the lead after 5 minutes. A misplaced pass by Prestwood was picked up by one of their midfielders, he passed to #9 who drew the keeper out before slotting calmly past the glovesman. Watlington continued to dominate possession but didn't really test the home keeper. Prestwood came into it more towards the end of the first third and came closest when a free-kick from 30 yards went narrowly high and wide. They started the second period on top too but the game soon slowed in pace with both sides concentrating on keeping the ball which the visitors seemed more comfortable. They probably deserved the win but Prestwood got an equaliser, a well-taken free-kick to earn themselves a share of the spoils.

I left just before 3 PM, the second opponent, a team in blue had already turned up and were watching the end of the game. The journey home felt a lot quicker, even though I took a diversion a couple of times. First up was the Peterley Manor farm shop, around a mile extra on my walk. There I purchased a local cider called Happily Dappily, a pork pie and some honeycomb. I was thirsty though and didn't have a bottle opener to drink my cider so I stopped at a Spar and got myself a can of Strongbow for £1.10. Much to my chagrin, the cider I'd bought earlier was much cheaper here. I walked the rest of the way home, getting in just before 5. I got cracking on my blog before dinner and finished it after. Saturday night TV was dire, so I chose to get an early night to try and make Sunday as painless as possible with me up at 4 AM. I'm not sure where my next game will be, hopefully, something on Friday with Fawley an early contender. With me seeing plenty of people doing more than one match today, I'm hopeful of doubling or tripling up next week too. 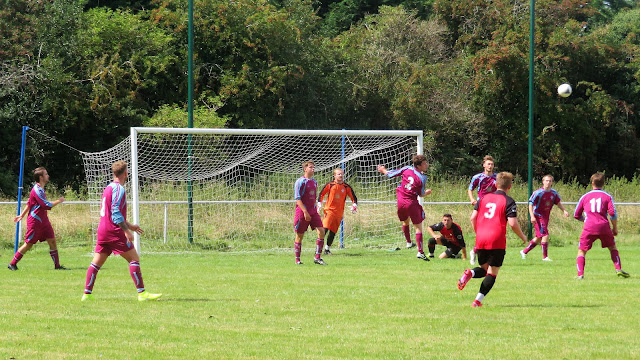 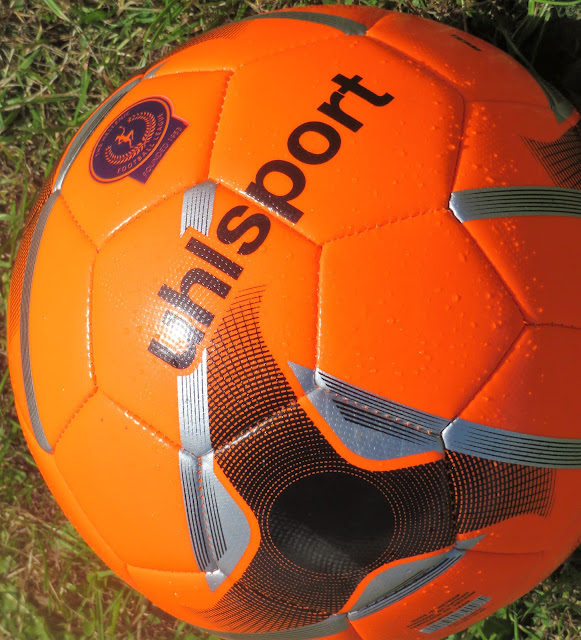 SPRINTERS LEISURE is a decent venue for step 8 of the Non-League pyramid. The pitch is fully railed and has a bit of hard standing around it. There's also a small area of cover available if you stand near the dressing rooms building. The only shame is that there's not really anything to say that the club plays there, though this is common where most clubs do not own their ground.

There's not much in the way of food or drink at the leisure centre but the village centre is only 10 minutes walk (or half a mile) away. This has a chippy, pizza place, a couple of pubs and a couple of supermarkets. 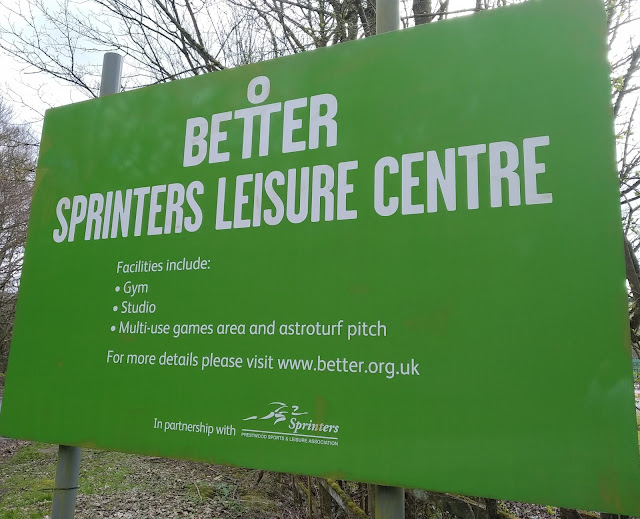 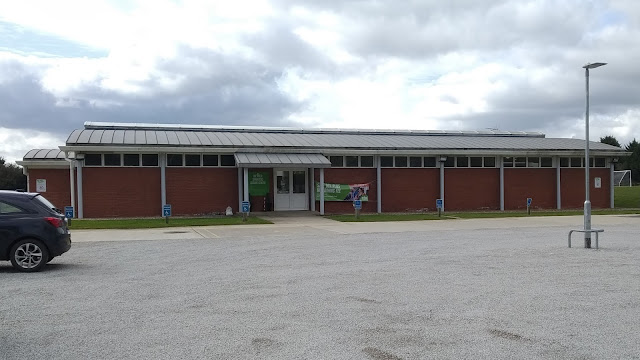 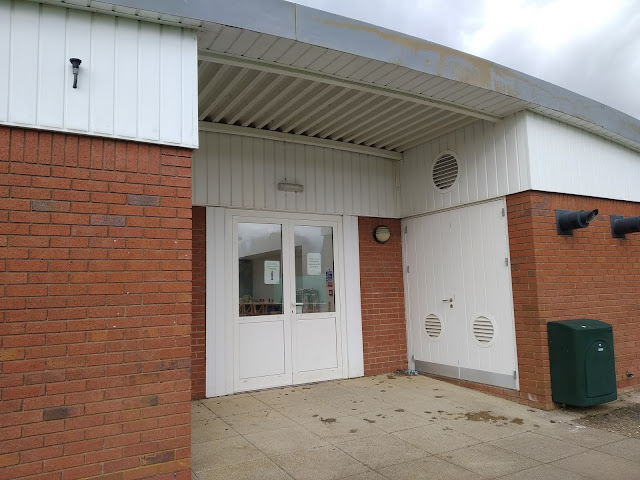 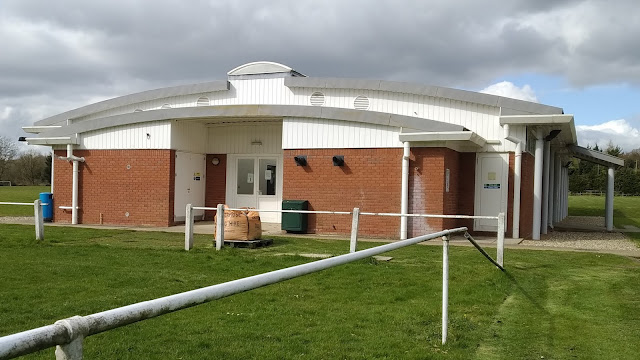 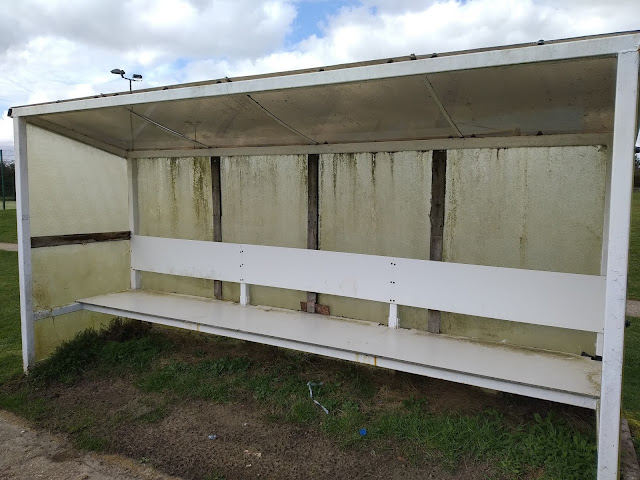 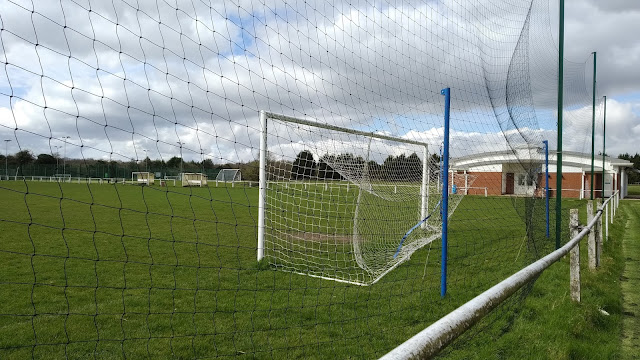 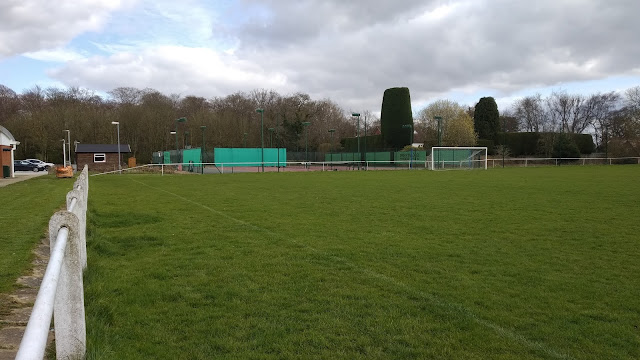