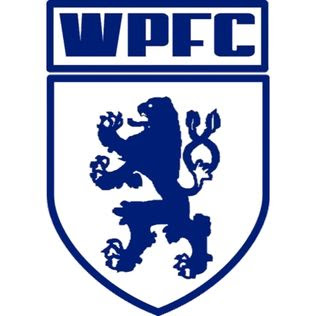 The history of the club is unclear, with records for a team in the area going back as far as 1900. They played in local Surrey Leagues for most of their history but joined the Combined Counties D1 in 2003 and were mainly successful there, winning the league in 2011 and 2018 and finishing as runners-up in 2010. Their lack of floodlights denied them promotion on those occasions as did entry into the FA Cup and FA Vase. Worse was to follow in 2018 when the FA decided that what had worked for 15 years without a hitch was no longer viable and they relegated them to step 7 despite the club being champions. I assume mass player exodus followed as the club are currently struggling in the Surrey Elite Intermediate League. They are safe for the season, unlike fellow step 6 club Farleigh Rovers who suffered the same fate and who now are relegated. Local honours include the Surrey Saturday Cup in 2017, the Combined Counties Division Cup In 2016, the Surrey Intermediate Cup In 1999 and the Surrey Junior Cup In 1938. The area of Worcester Park has a population of 16,000 and has been home to Jimmy Hill, John Major, Kenneth Wolstenholme, Daley Thompson and HG Wells amongst others. 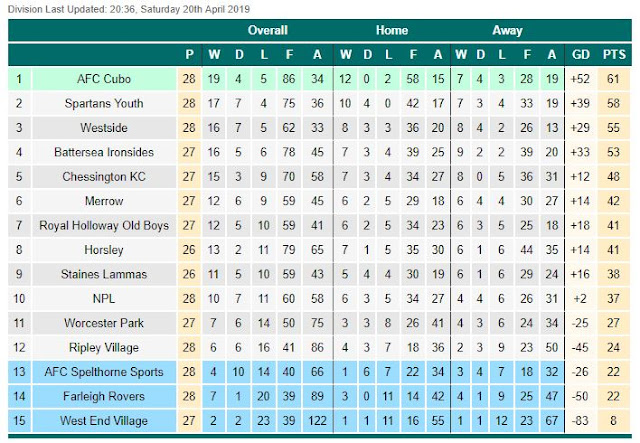 What with me having had a busy Thursday and Friday as well as two games on Sunday, I was always going to favour a train journey. Options were limited with me having done most of the grounds in London but I initially favoured Clapton CFC v The Curve as it was a club that I'd fancied visiting for a while. I was all set to do that until my fellow hopper Dan pointed out that they are at home on May 11th and with games thin on the ground at that point, I decided to save it until then. I was pleased when I saw that Worcester Park were at home as it was another one that had been on my to-do list for a while thanks mainly to their tea bar. The night before was a late night after coming back from my Friday treble and catching up with things, so I didn't get to sleep until after 3 am. On the day, I woke up at 8, having breakfast, a bath and a change of clothes. I then cracked on with some of my blog from yesterday and sorting photos. As a result, I was later than I wanted leaving, especially with what I thought was a 2pm kick-off. I left home at 10 ish, getting to the Amersham station 25 minutes later. I was dismayed when I saw that Chiltern Railways said they had cancelled some trains, especially as time was fairly tight. 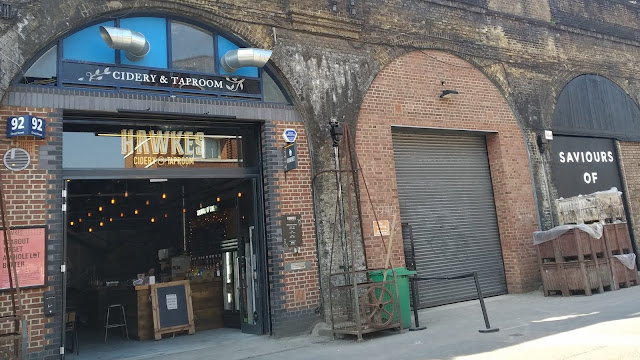 However, my fears were allayed when I checked the Worcester Park FC and saw that kick off was a traditional 3pm. It meant that I was able to do my chosen pre-match stuff, I'd made plans to drink elsewhere with there being no pubs of note near the ground. The Chiltern service did turn up in the end, but it was absolutely rammed. Usually, I get a double seat to myself, but space was so tight today, I couldn't even take a sip of my drink. Thankfully, I changed train at Harrow with the tube being a lot more spacious. After a change at Finchley Road, I got to Bermondsey at 11.50. It was a 10-minute walk to the Hawkes Cider Tap where I tried a few new ones. The pick of the bunch was their Big Wow, £6 for two-thirds of a pint, but delicious and full of flavour. I left at 1.15, getting the train from Bermondsey to Waterloo pretty quick. But there was a near 40-minute wait for the train to Worcester Park. I was glad I’d allowed plenty of time. I got to the ground at 2.40, having an egg burger with chips and curry sauce for little over £3. I also later got a cheese, tomato and ham Panini, though that took a while to come. 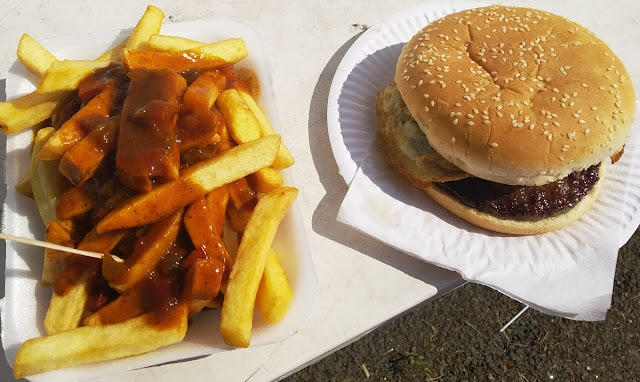 The game started on a dry and dusty pitch, but Worcester Park were ahead within 7 minutes. I've not been able to find the team sheet or scorers, so can't confirm who scored when but the first goal came when a ball forward found number 6 who had an easy tap in to put his side ahead.  A scrambled equaliser for Merrow on 21 minutes when their number 9 nudged the ball across the line. A deflected shot from the edge of the area made it 2-1 to Worcester Park just before half time. A shot from inside the area made it 3-1 to the hosts on 48 minutes. I didn't see the Merrow strike that reduced the score to 3-2, but apparently, it was a cracker from Matt Sharp according to their club Twitter. Worcester Park were denied the chance to restore the lad when they had a shot cleared off the line and they were made to pay on 75 minutes when Merrow equalised through a penalty through the Worcester Park keeper did get a hand to it. After 83 minutes Merrow were ahead through a deflected goal but Worcester Park equalised a few minutes from time thanks to a penalty that been awarded for handball. Although the hosts had slightly the better of the game, Merrow did enough to deserve a goal. The home goals were scored by Chaney, Davison, Farrington & Manville according to the Football Mitoo website, but in any case, it had been an excellent game, especially given the heat. 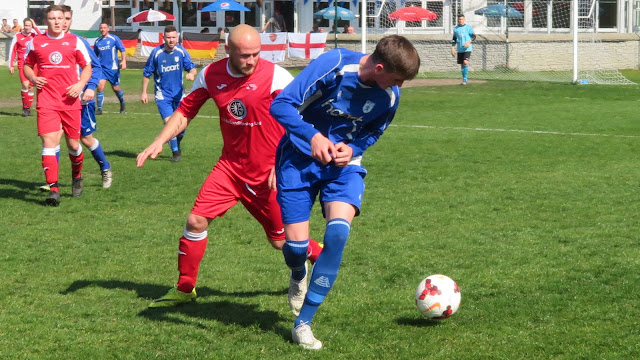 After the game, I headed across the road to Poundland as I really needed a drink given the hot weather. I managed to get some Irn Bru and a Honeycomb Toblerone as well as a scratchcard, the purchase being funded by a previous win. It was a few minutes back to the train station where I had a 15-minute wait for my train back into London. After changing at Finchley Road, I only had a few minutes wait for my final train to Amersham. With me still awaiting confirmation of the team lineups, I did some work on one of yesterday’s blogs on the final leg of my journey. I was home around 7, but having filled my boots at the footy, didn't fancy dinner. I spent the evening getting on with my blogs amongst other things before watching Match Of The Day and going to bed around 1 am. It was nice not to have to be up for work on Sunday, a rare treat for me. 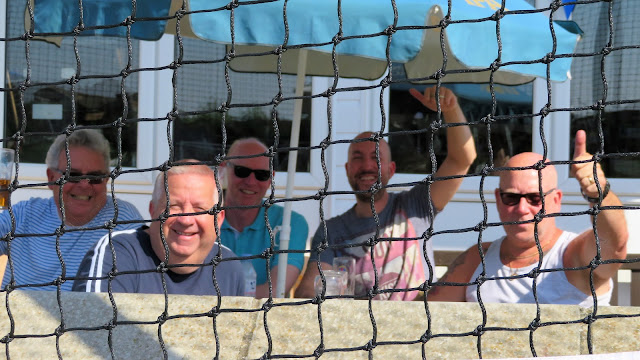 SKINNERS FIELD is a great venue for step 7 but despite it hosting step 6 football with no issues for 15 years with no issues, it was deemed 'not good enough to carry on this season, the reason being the lack of floodlights and seats. There's a covered area for around 50 people along the side plus some covered standing at the rear of the outside patio area, The rest of the ground is open. The tea bar is the highlight of the ground, a great range of excellent food at cheap prices. There's also a bar that is pretty well priced and although the range wasn't amazing, there are no pubs of note that I could see nearby. 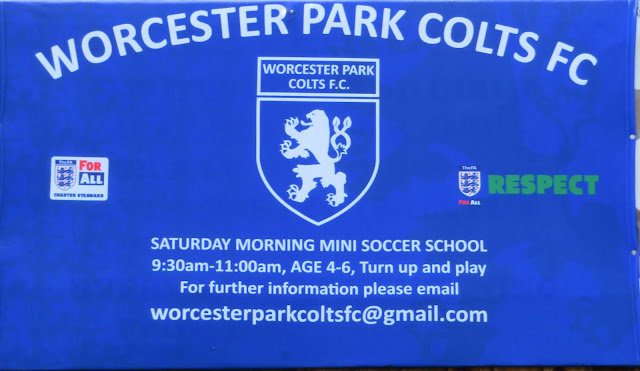 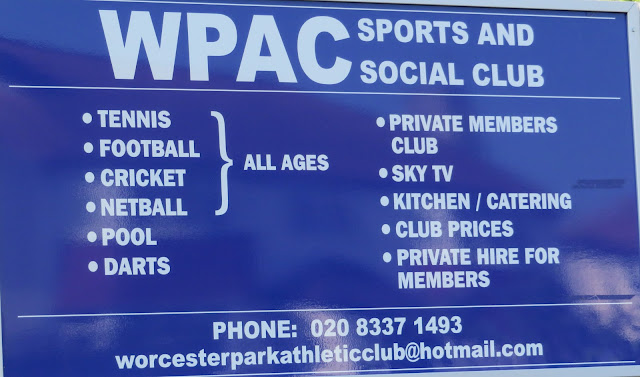 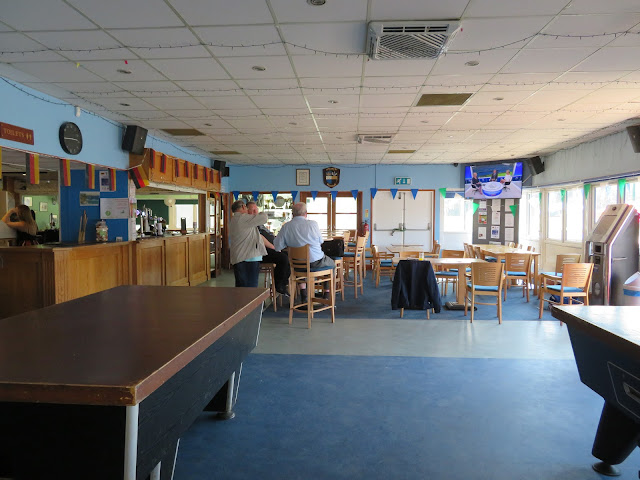 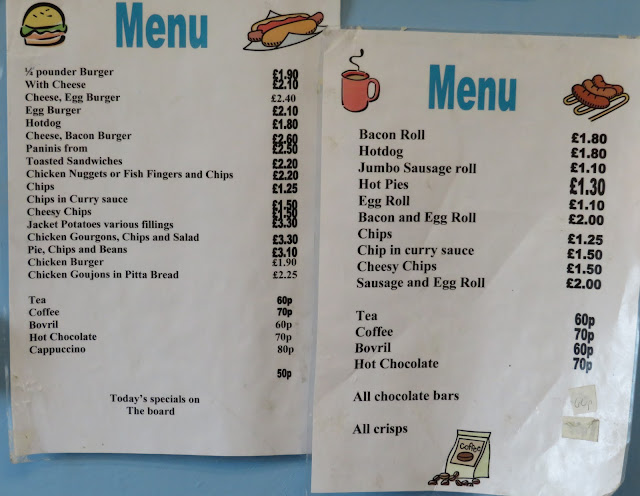 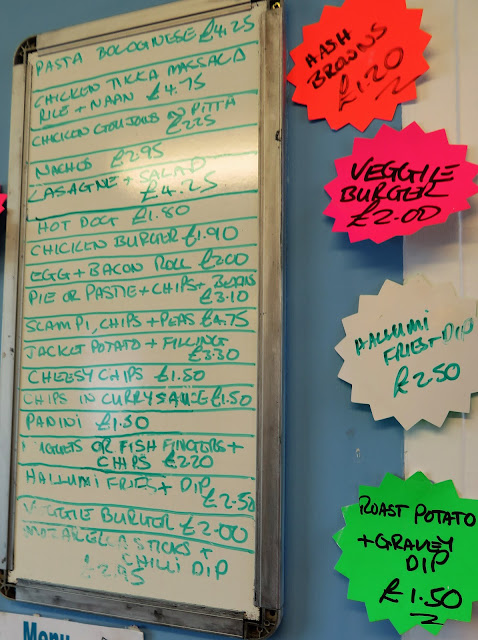 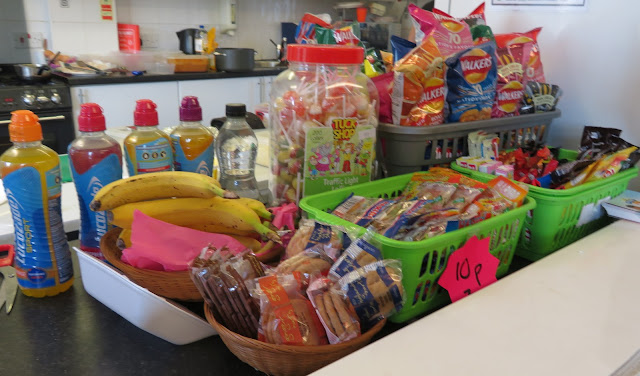 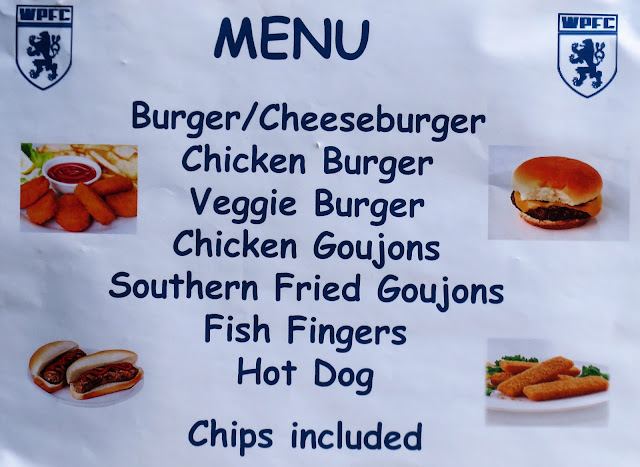 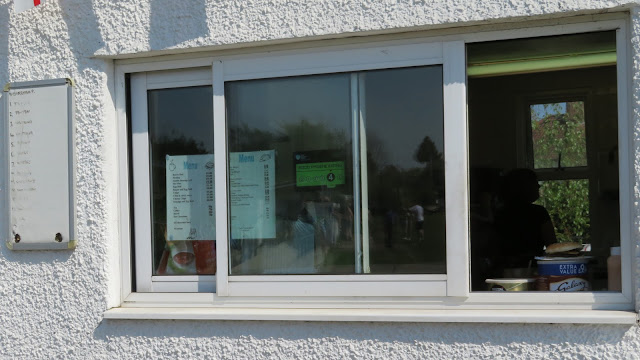 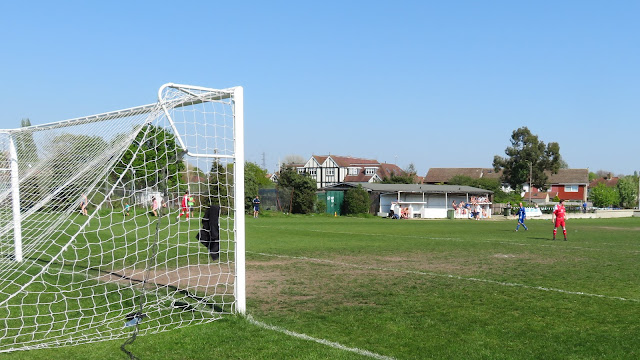 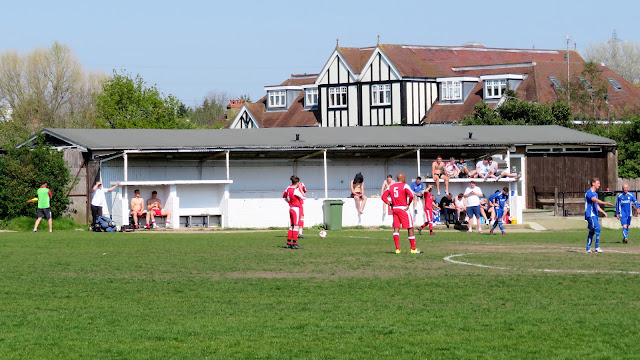 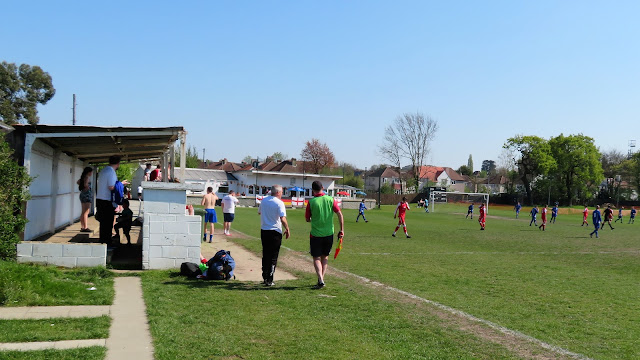 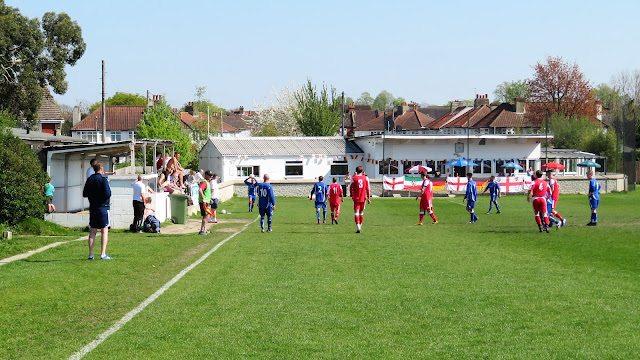 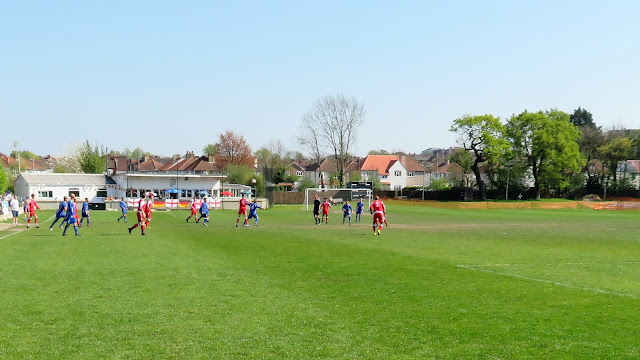 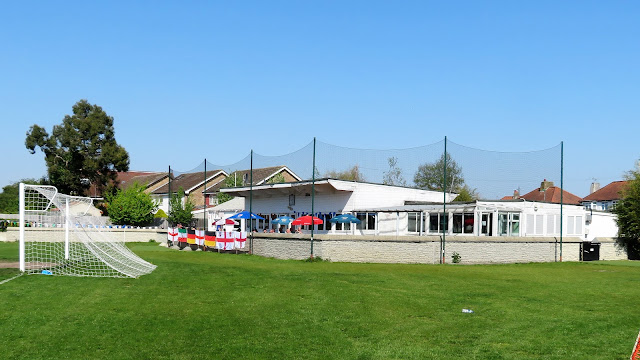 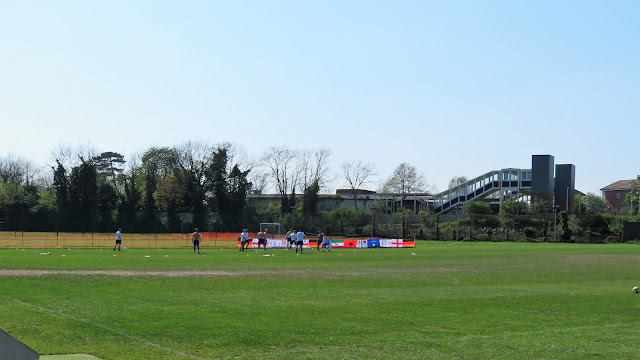 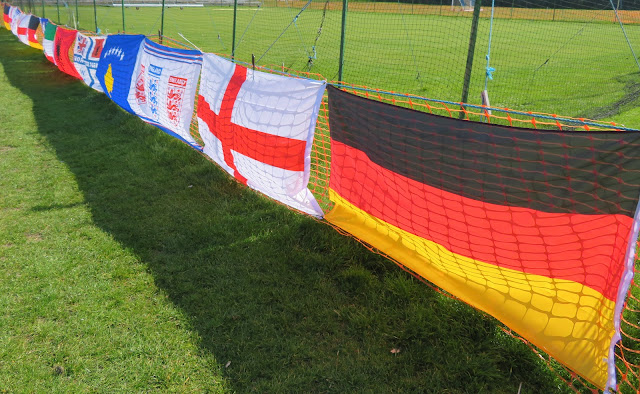 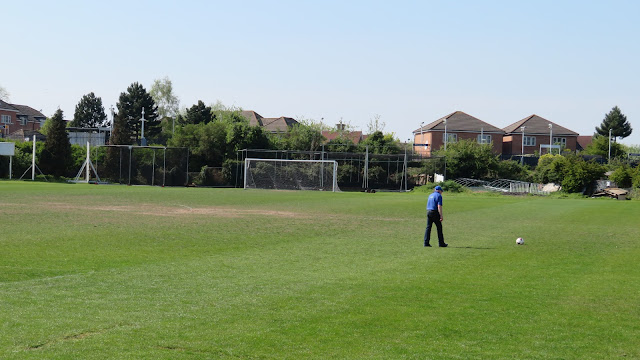