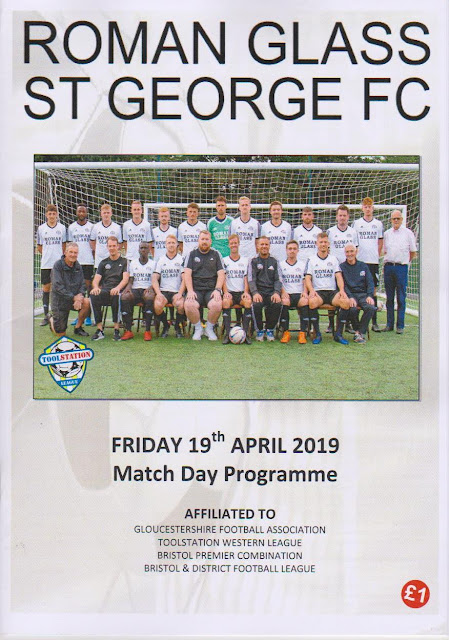 The club was established in 1872, making them the oldest club in Bristol. They’ve been known as St George or Bristol St George at various points during their history. They were founder members of the Bristol and District League In 1892, this was later renamed the Western League. Spells in the Birmingham and Gloucestershire County Leagues followed with the club occasionally dropping down into local football. In 1995 they merged with local side Roman Glass, taking their current name. The original club were three times Western League runners-up. In modern history, they joined the Gloucestershire County League in 1999, winning it twice. The latter of these occasions coincided with a move to the Gloucestershire FA headquarters, giving them the opportunity to play step 6 football. They joined Division 1 of the Western League in 2007 and despite finishing in the bottom half of the table more often than not, they managed to finish as runners-up to
Westbury United on 2018, earning promotion to the Western Premier in the process. In their debut season at step 5, they sit in 18th place, knowing that they are are safe from relegation with a few games to go.

Since the merger, form in the FA competitions has not been notable. The original club reached the FA Cup 2nd Qualifying Round in 1953, beating Radstock Town and Hanham United prior to a defeat at Chippenham United. They’ve also twice reached the FA Vase 3rd Round as well as the FA Amateur Cup 2nd Round. Local Cup wins include two Gloucestershire Senior Challenge Cups and eight Gloucestershire Senior Amateur Cups. The current manager is the former Bristol Rovers player Andy Gurney. 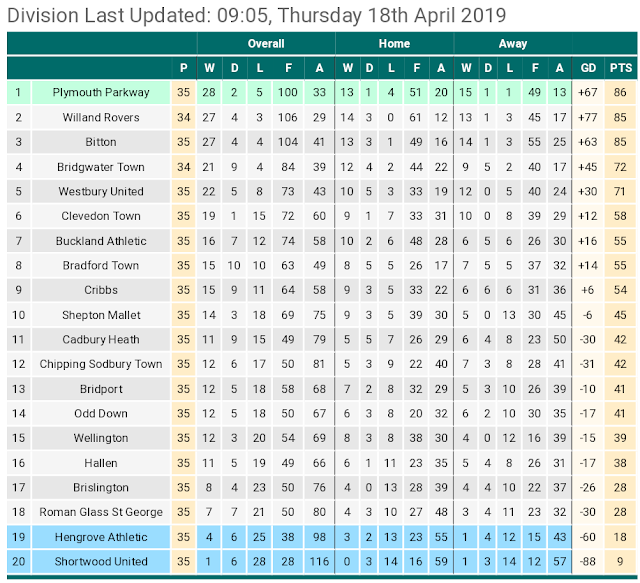 Having already established that I was going to visit Clevedon Town and Newent Town on this day, I needed to find myself a morning game. I was split between Sherborne Town (a 100-mile round trip) or Roman Glass St George (the 1 pm kick off would lead to me missing the start of the Clevedon game) so I put a poll (or a referendum) on Twitter. No shiny red buses promising things that cannot be fulfilled, just the plain facts. Not Brexit, more Clentry if you like. Roman Glass St George won with 58% of the vote, so that was my early game decided. I was camping in Almondsbury after last night’s game there and despite having to sleep in the shower block because of noise from the nearby M4, I got a good 6 hours sleep in. I woke up around 7, having a nice hot shower before having some grapes for breakfast. The short notice of the game meant that I spent the morning relaxing in my tent while doing research on the club’s history. I was packed up and ready to go by 11 and with time to spare I went to a farm shop and Tesco. The former yielded nothing but Tesco was good with me picking up a few local ciders and some lunch. 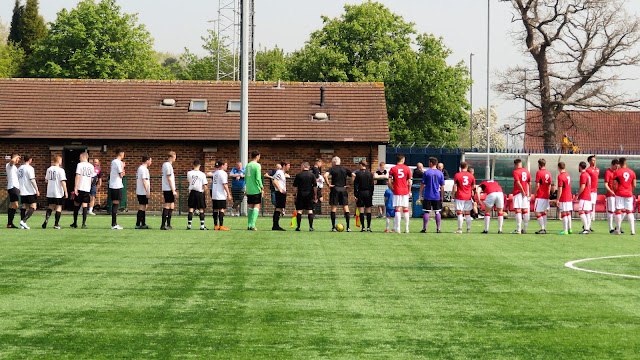 From there it was a 10-minute drive to the ground, with me getting there at 12.20. Admission was £6 and a programme £1 from the friendly gateman. I went to the club room and got a can of Thatchers Haze for £2.20, drinking it on the grass bank outside while I caught up online. The attendance wasn't very big and I can't help but think they might have had a few more had it kicked off earlier. The game started with very few chances but Cribbs were slightly on top. They took the lead on 36 minutes when Jordan Lovibond followed up with a header after the initial shot had been parried by the keeper. The hosts came close to equalising shortly after, the home keeper turning a low drive around the post. Lovibond got his and Cribbs second, rounding the keeper and finishing from around 5 yards to end a good team move. Half time came and the referee took the mick somewhat, going in at 1.47 and taking a 21-minute half time break, coming out at 2.00 with the players already having been out on the pitch and lined up for a good 5 minutes. Lovibond was denied his hat trick goal on 48 minutes as he was adjudged to be offside. The hosts then had a dominant 15-minute spell, but without really creating anything. The closest anyone came to scoring was when Cribbs had a great shot on 64 minutes which the home keeper did well to tip round the post. The referee continued to drag his heels and so it wasn't until 2.57 that I got away. This, coupled with traffic issues meant that I wouldn't get to my game at Clevedon until half time. 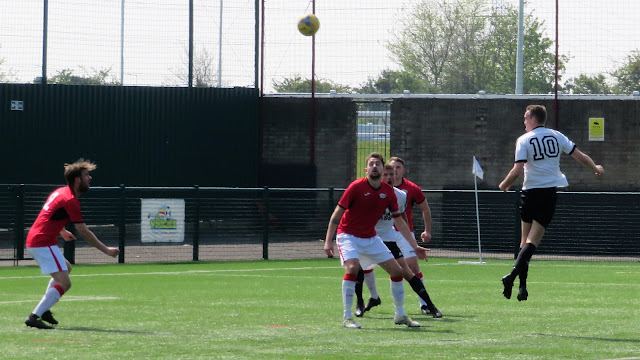 OAKLANDS PARK is a decent venue for the level. All the covered accommodation is on one side comprising of two small metal terraces and a 150 seater proper stand which looks very similar to the one at Bristol Manor Farm. The rest of the ground is open hard standing. There's not a huge amount nearby, so you are probably better off eating and drinking at the ground where drinks, pies and pasties are available. The programme is £1 and is well presented and decent value for the price. 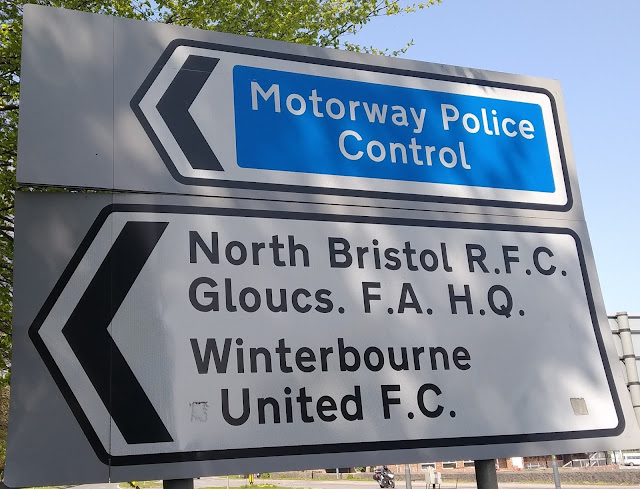 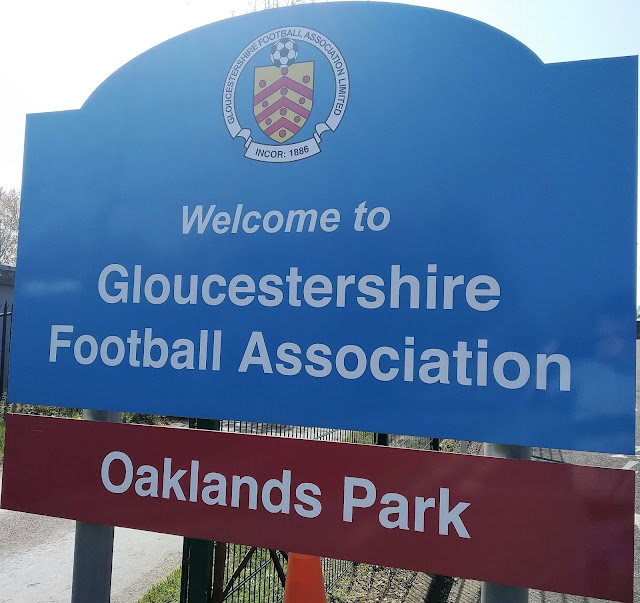 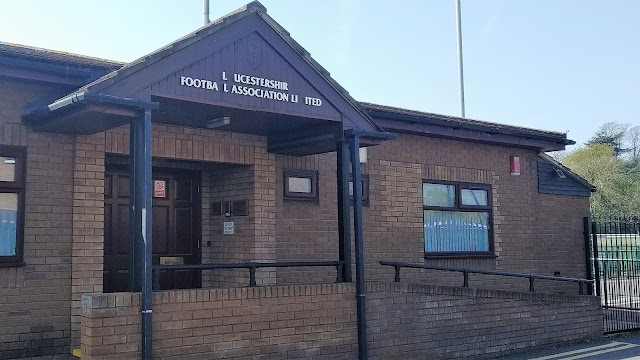 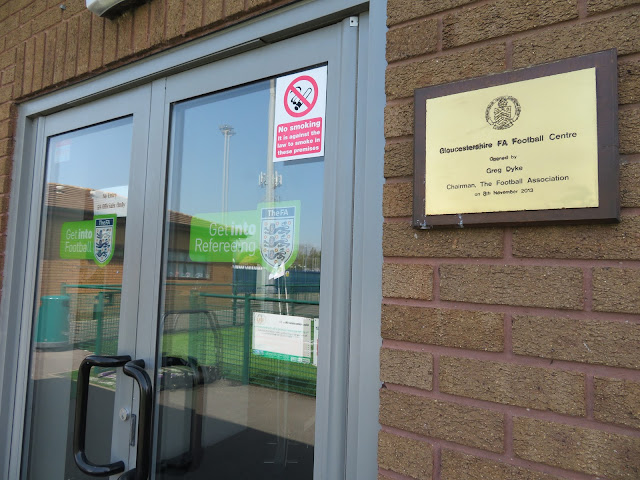 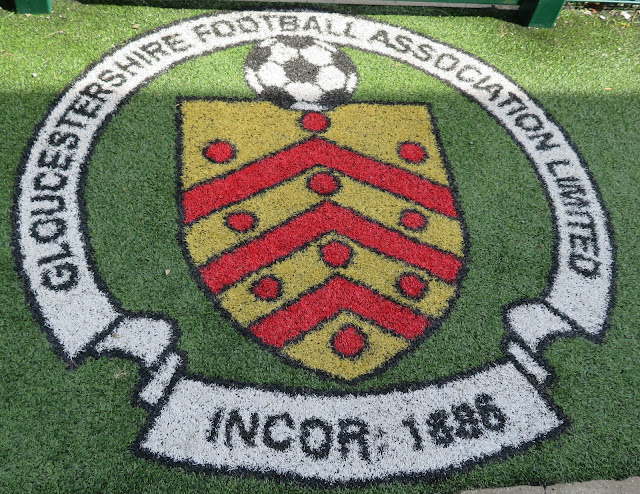 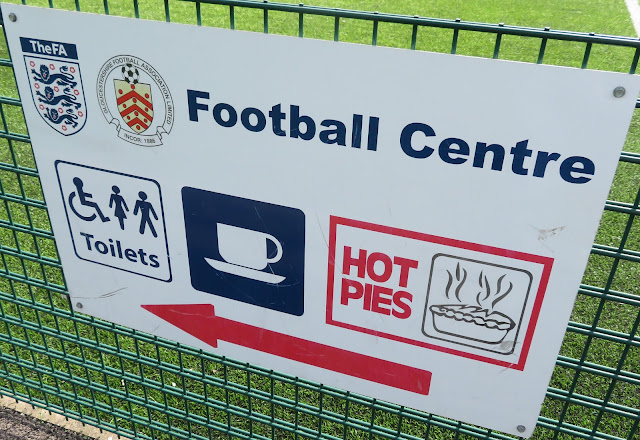 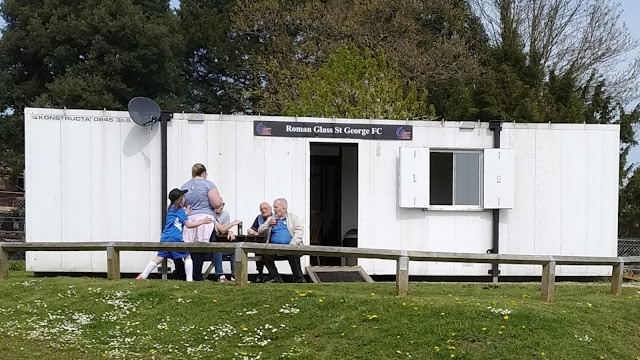 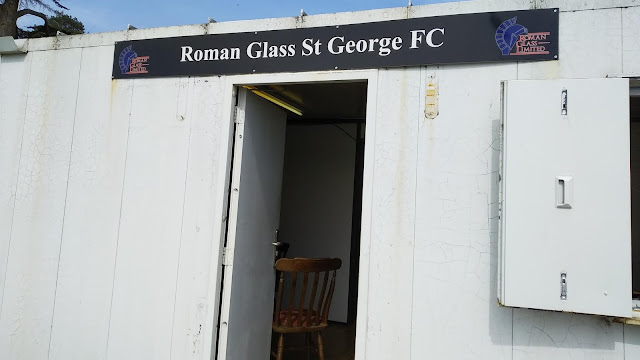 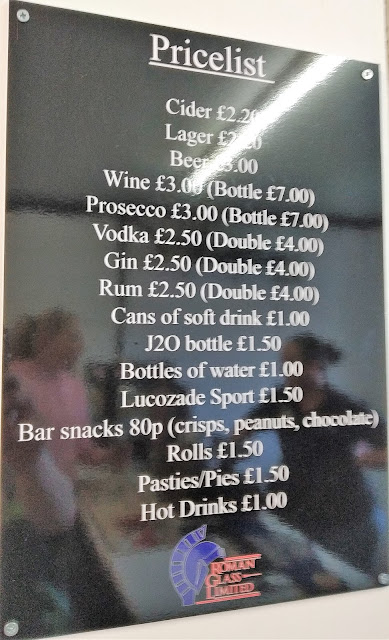 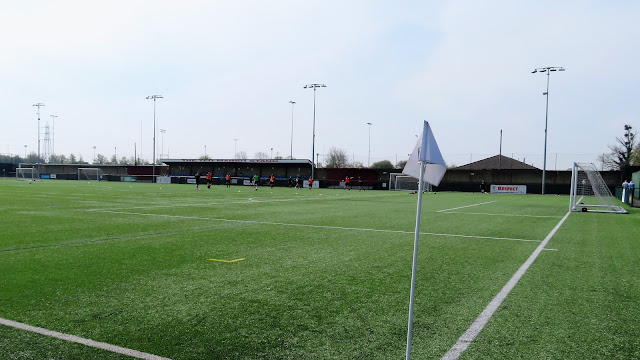 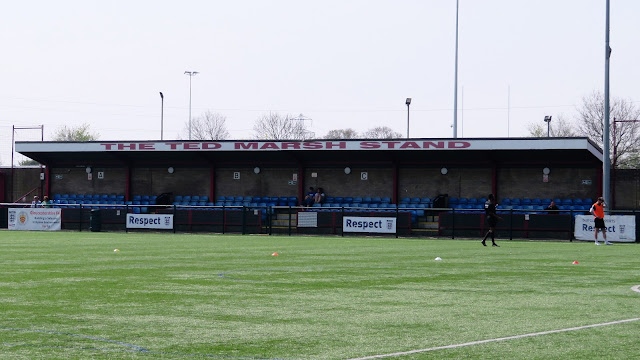 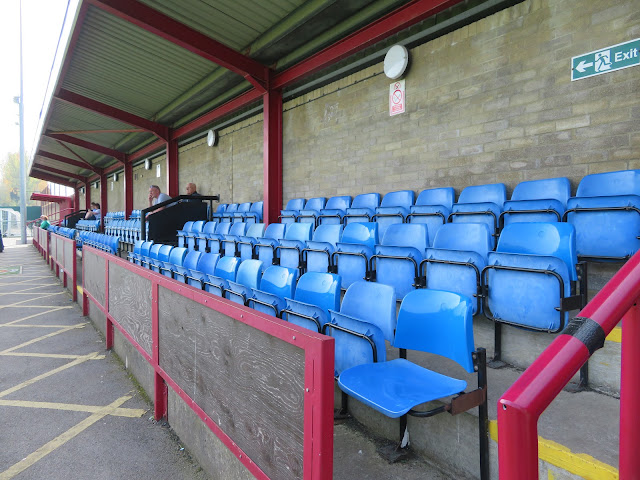 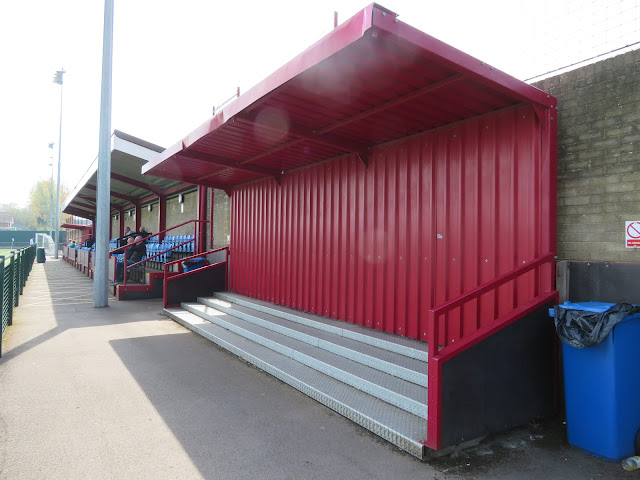 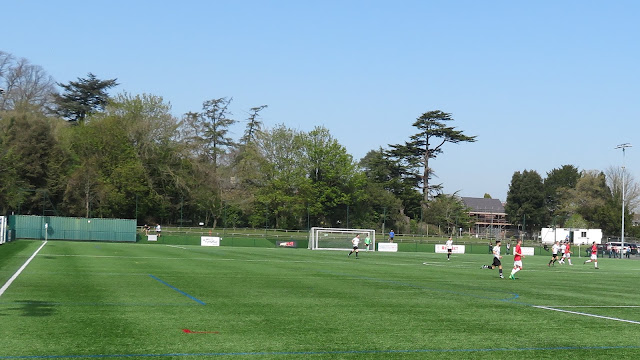 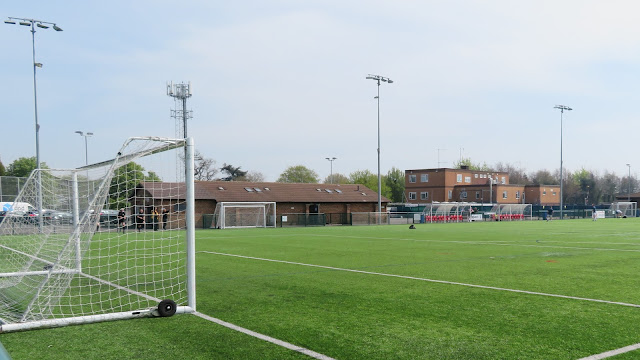 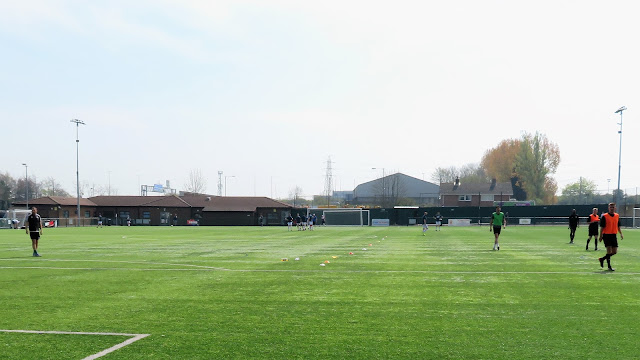