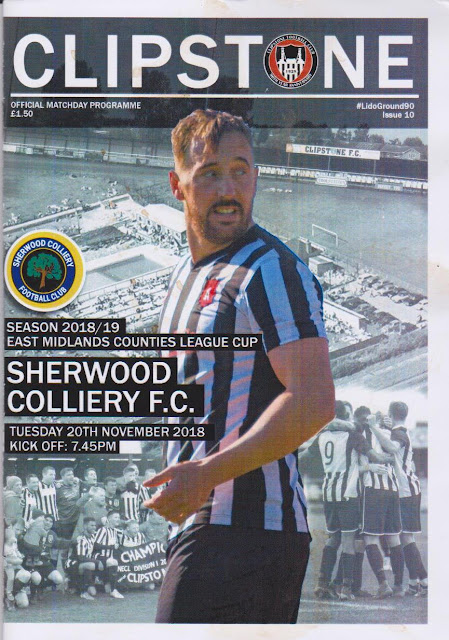 The club was established in 1928 as Clipstone Combine and have also been known as Clipstone Boys Brigade and Clipstone Welfare at various points during their history. Early leagues included the Colliery Alliance League, the Mansfield & District League, the Sutton & Skegby League, the Notts Spartan League and the Notts Alliance. The latter proved to be a period of great success with them winning the league twice in 1993 and 1994. It was after the second of those wins that they made the step up to the Central Midlands League, starting in its second-tier Premier Division. They were champions in 1995 and 1997, the second of these occasions saw them make the step up to the Supreme Division where finishes ranged from 5th in 2007 to bottom the following season. In 2011, the league was restructured into two regional divisions, with Clipstone finishing 4th in the CML North. This was good enough for promotion to the step 6 NCEL D1 in 2012. They won this league in 2015 and were promoted to the Premier Division. The 2015/16 season saw the club's record finish of 13th in the NCEL Premier, but results soon fell away. Last season was an especially dreadful one, going the entire season without a league win and only managing two draws - at home to Hall Road Rangers (2-2) and away to Staveley Miners Welfare (0-0). Obviously, this meant relegation, in this case to the East Midlands Counties League. This season started poorly with two defeats, but finally, on 18th August they recorded their first league win since 18th March 2017 as they won 1-0 at Teversal. It's been an unspectacular but steady season since then with the team sitting in 14th at the time of my visit.

Clipstone first entered the FA Cup in 2014, beating Harrowby United and Loughborough University before losing to Grantham Town in the 1st Qualifying Round, a feat they matched the following season. In the FA Vase, the best run came during the 1992/93 season as they beat Hall Road Rangers, Hatfield Main, Glasshoughton Welfare & Hucknall Town before a 1-0 defeat at Hinckley Athletic. Local cup wins include the CML Floodlit Cup in 2007, the Notts Spartan League Cup & Notts Intermediate Cup in 1956, the Notts Senior Cup twice and the Notts Alliance League Cup on four occasions. Clipstone itself has a population of 3,500 and is a small ex-coal mining village with the pit closing in 2003. The Welfare Ground in Clipstone was used as a location in the 2007 film 'Control' which told the life story of Joy Division singer Ian Curtis. 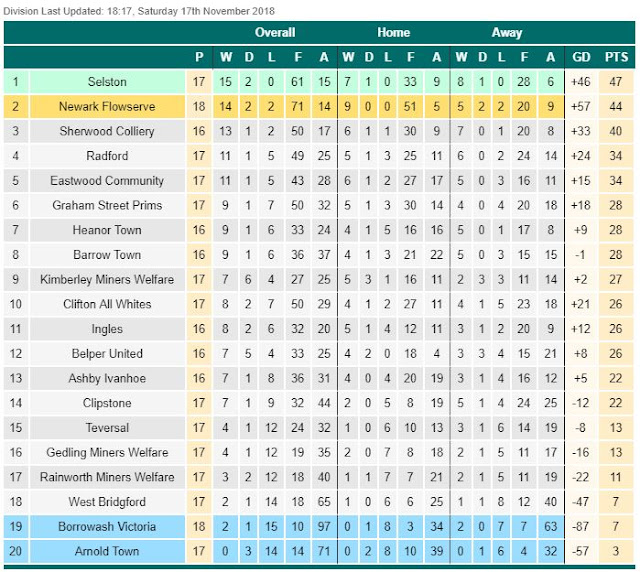 Once again, it was time for Anwar & I's Tuesday groundhop, though I wasn't sure if he would be available as his appearances have been rather sporadic of late. Thankfully he was and he was happy to go further for once, thanks to his mate Scouse Carl coming with us. It had been over 4 years since he's made an appearance, but his presence was welcome, even though they got to choose where we went due to them putting a good proportion of the petrol costs in. They opted for Alfreton v Leamington, a ground that I'd enjoyed and might have considered a revisit to, had it not been for the hefty £14 entrance fee. They've always been an expensive club to visit in my experience, but in fairness, the cost was in line with a lot of other clubs in the division. The options were fairly sparse and in the end, boiled down to two options - Swallownest or Clipstone. I opted for the latter as the ground looked a lot better. I got all my research done, including finding a reasonable place for dinner in Alfreton. 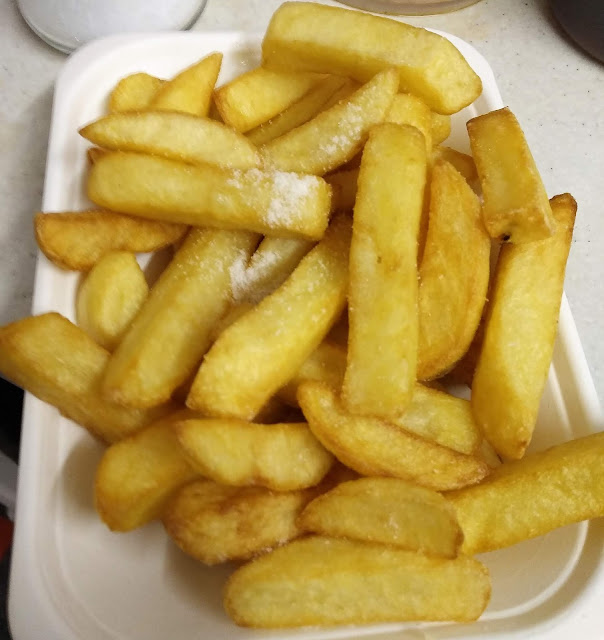 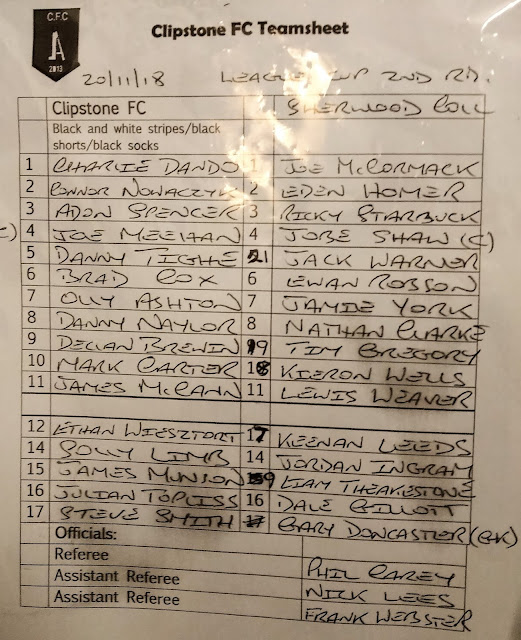 The day of the game came and I had a great night's sleep, making the long trip all the more sensible as I can never get to sleep early the following night. The morning bought the disappointing news that fellow hopper Chris had pulled out of Friday's trip to Chadderton and although I was disappointed, I was thankful for the notice. Although it looked rainy, I decided to proceed with my plans to walk to town and back, 7 miles in all, mainly for the exercise. I purchased a few small bits down there as well as having a very nice 'Pigs Under Blankets' toasted baguette from Greggs. I'd left fairly late and got back at 2, so I only had an hour to spare before I headed out again. My decision to choose Clipstone over Swallownest had proven to be a wise one, as Swallownest had been postponed at 2 pm due to a waterlogged pitch. I got my flask and headed out at around 3 as I wanted to go to a shop in Aylesbury called B&M Bargains to get a few bits that I'd been unable to get in Wycombe for my desired price. I managed to get some things and picked up Anwar & Carl at 4.05. We were soon on our way but were delayed by a broken down bus getting out of Aylesbury. There was then the usual fun of getting through Milton Keynes then roadworks on the M1 with around 30 minutes added to our journey which went pretty quickly with us chatting and catching up. I dropped the lads off at 6.45 and it was half an hour to Clipstone. I had planned to stop for dinner in Alfreton, but with time tight, I'd driven straight to the ground. I paid £5 to get in, £1.50 for a programme and £2 for sausage and chips from the excellent Cafe in the ground. I then caught up on Twitter as I waited for kick off. 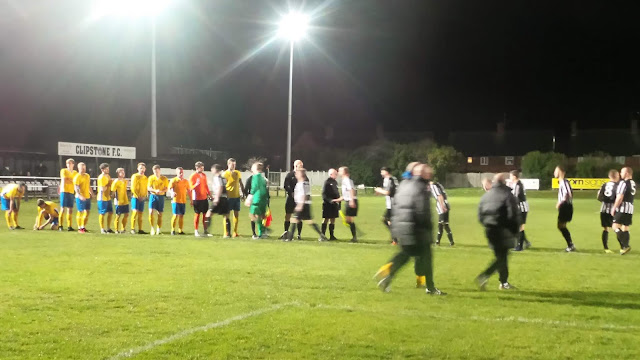 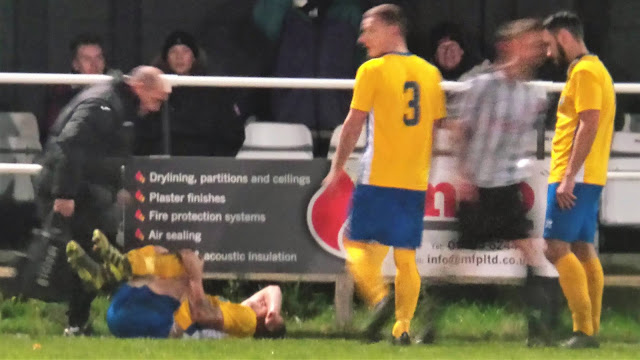 There was drizzle on and off, so I took shelter in the stand. It was a keenly contested local derby and very physical at times. Sherwood always looked a cut above and they took the lead on 38 minutes, a header at the back post from 5 yards by Kieran Wells following a good run and cross from the left. Halftime came soon after and I had another portion of chips for £1. The second half continued with the visitors on the front foot but Clipstone did have some good spells including hitting the post from a free kick on 55 minutes. Clipstone were the better side second half and they equalised 5 minutes from time with a scrappy goal that saw the ball eased over the line by Mark Carter. As much as I was pleased for Clipstone, I wasn't really fancying extra time with two mates to pick up and so I was glad that both teams were going in search of a winner. It came within a couple of minutes when Sherwood put a cross in from the right, home keeper Charlie Dando could only parry it into the path of Connor Nowaczyk who scored an unfortunate own goal for Clipstone despite his side having the better of the second half. I left at 9.45 and it took me half an hour to get back to Alfreton at 10.15. It was a reasonable journey home and despite long stretches of roadworks and them throwing us off the M1 a junction early. I dropped Anwar and Carl off at 12:20 and was back home myself at 12.45. As expected I couldn't get to sleep for ages and only got an hours sleep, needing a catchup nap the following afternoon.


THE LIDO GROUND is a great venue for step 6 and is probably good enough for step 3 or 4. Most of the far side is covered, comprising of a stand that holds 100 seated and another that holds 200 standing. Behind the goal where the turnstile is, there's a further covered standing area which holds 100 plus a few seated. Behind the rest of the ground is hard standing, as is the dugout side. The far goal is grass banking and is closed to fans. Facilities at the ground include a great value cafe with decent food and a small choice of alcohol in cans. The ground is situated near the village of Clipstone, but I didn't check out what was there. The club is nice and friendly and well worth a visit, the programme is one of the better ones I have seen this season and is good value at £1.50. 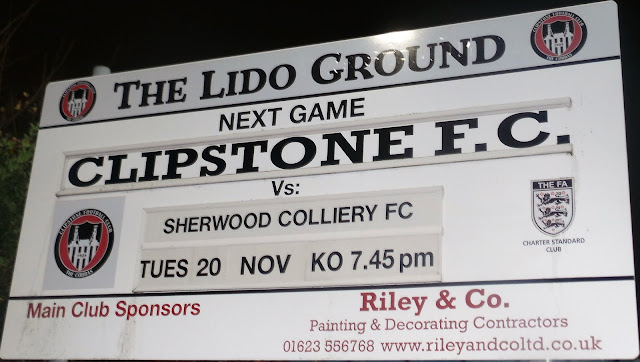 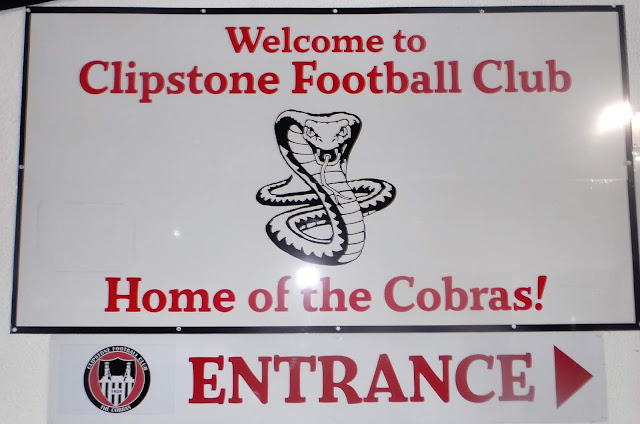 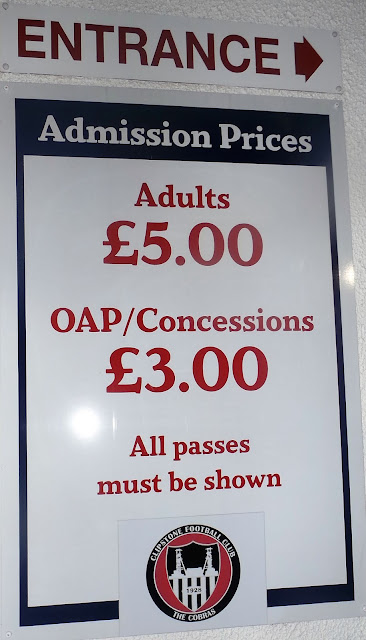 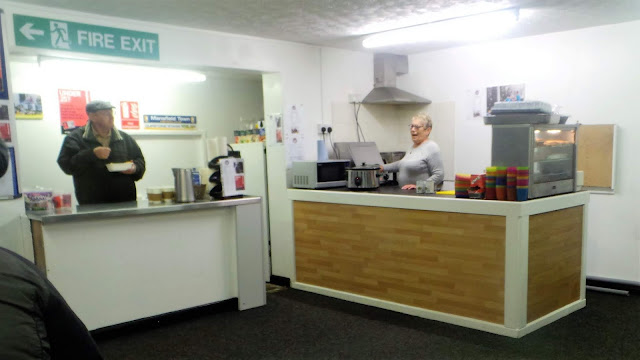 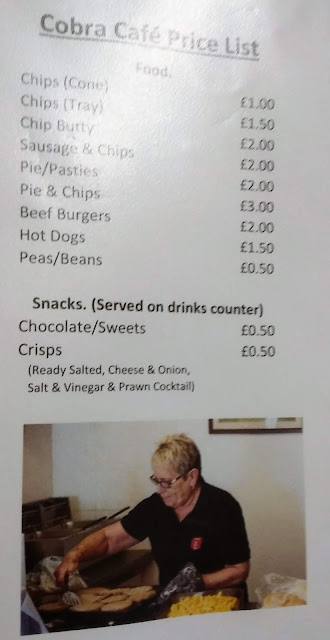 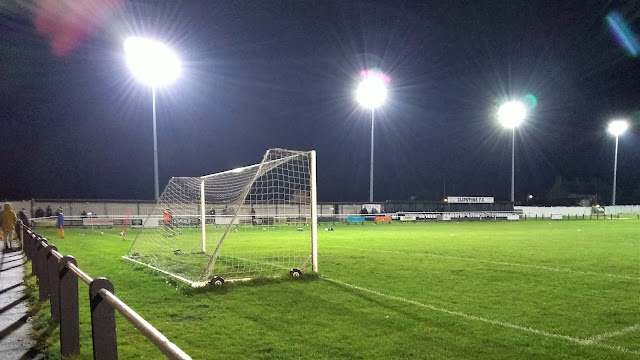 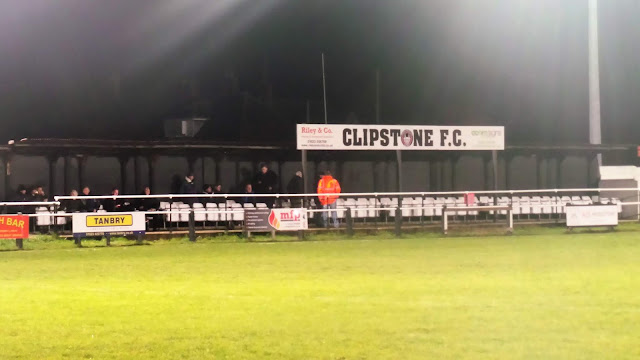 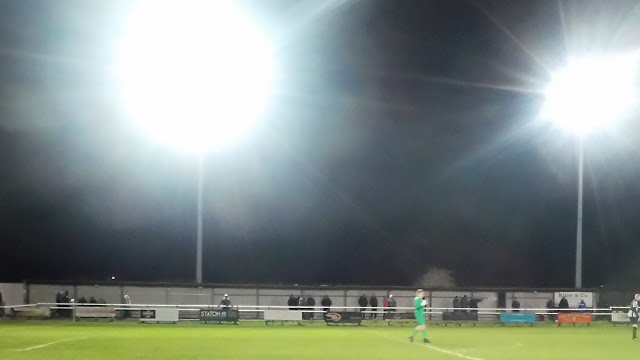 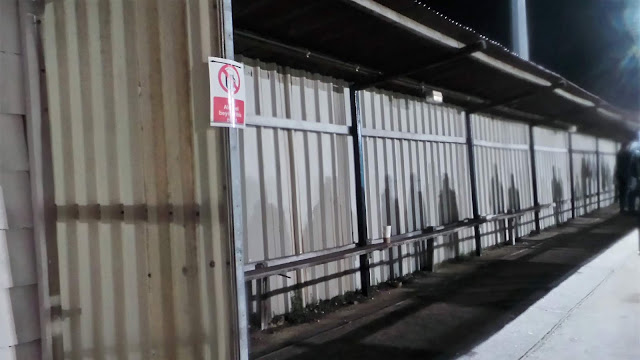 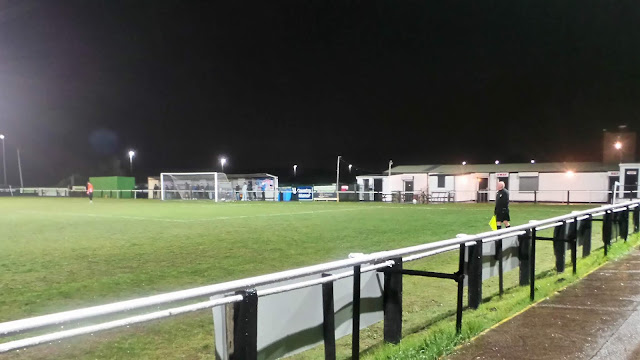 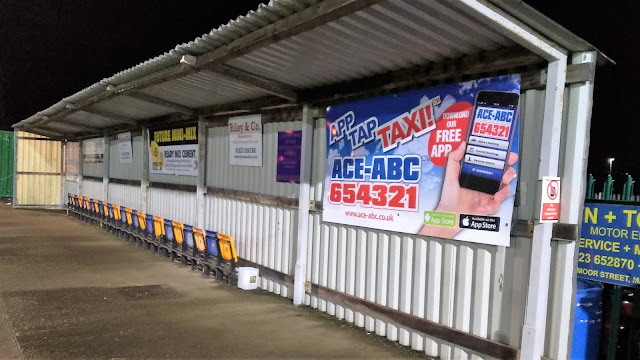 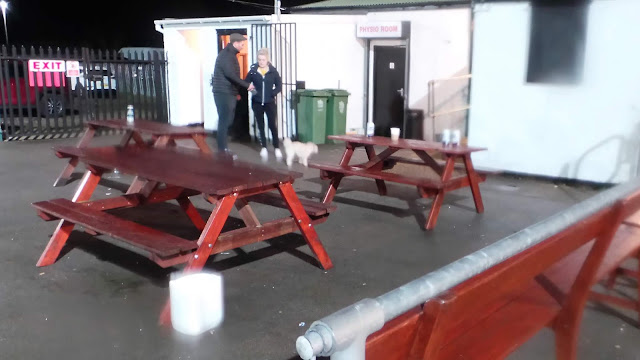 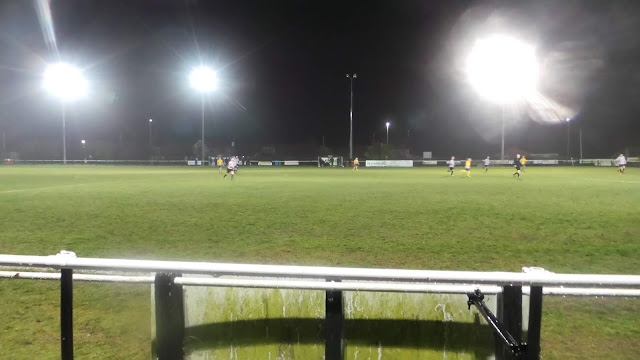 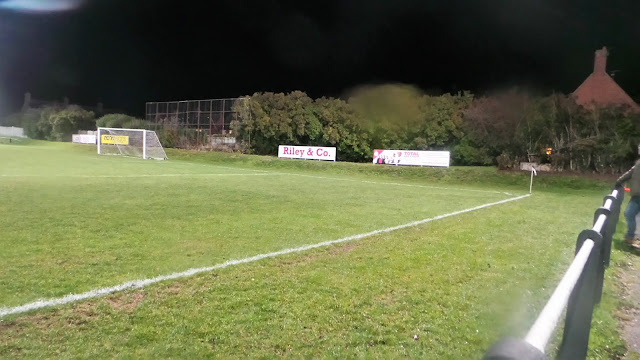