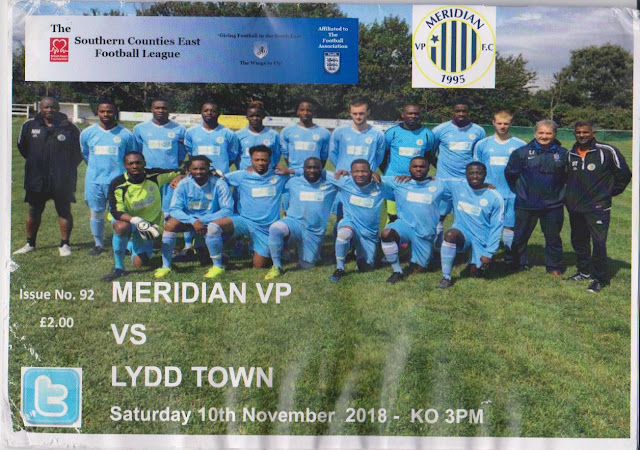 MERIDIAN VALLEY PARK were established in 1995 as Meridian Sports & Social which they were known as up until they changed to their present name in 2013. Starting out in the Dartford & District League they were runners-up in 1999/00. 2003 saw them join the Kent County League. Despite finishing second-bottom in Division 2 West on three consecutive occasions, they were invited to become founder members of the step 6 Kent Invicta League in 2011. They remain there to this day, though the league has now been renamed the Southern Counties East Division 1. Meridian have generally struggled - their best finish coming in 2016 when they finished 12th out of 20 teams. This season sees them sitting 15th at the start of play, with a good chance of achieving their best ever finish if results go their way.

The club has not yet entered the FA Cup, but their record FA Vase run came last season. They beat Deportivo Galacia on penalties in the 2nd Qualifying Round before beating Hollands & Blair 2-0 in the 1sr Round. Their run ended in the 2nd Round with a 3-0 defeat to Horley Town.  Meridian were Dartford & District League winners in 2003 after losing the previous three finals. The club has a number of teams including a veterans side, for which 74-year-old Derek May scored his 1,300th goal in 2012. Meridian Sports & Social Club itself has been around since 1921, established by Siemens workers in the local Woolwich factory. The factory closed in 1967 and the site laid derelict for 10 years before being taken over by Greenwich Borough Council. Fellow SCEL Division 1 side currently share the ground whilst the now-defunct Thamesmead Town played there in the mid-1980's. 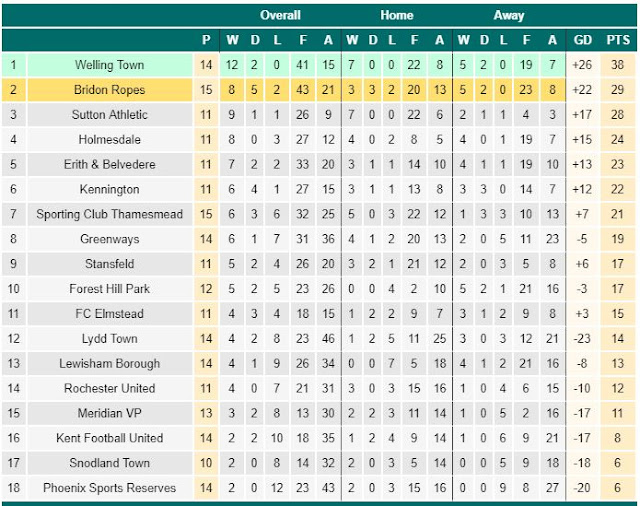 When I’d started planning my fixtures at the start of the season, the intention was to do an FA Cup game this weekend. It was a competition that I held in high regard and I always try to see as many games as I can. But the first round draw had thrown up some uninspiring ties, at least where my groundhopping was concerned. Not least for Wycombe who were handed a tricky tie at fellow League 1 side Luton Town. I did briefly consider Metropolitan Police v Newport County but with a paucity of decent pubs near there and having to chance getting a ticket on the day, I decided against it. I would be doing a game in London on the train though and out of the three options Meridian VP won out over Fire United Christian and Park View because I could have a reasonably decent pre-match in Woolwich. People say London is expensive, but in public transport terms, the walk up prices are a bargain. For no more than £12, you can enjoy unlimited travel in London if you use an Oyster or contactless card and I could get my return for as cheap as £8.20 if I was prepared to put a bit of walking in. Compare that to a return to Birmingham from High Wycombe at £25 and it’s a great deal, especially when the last train back is just after 9 pm making it utterly hopeless for midweek games. 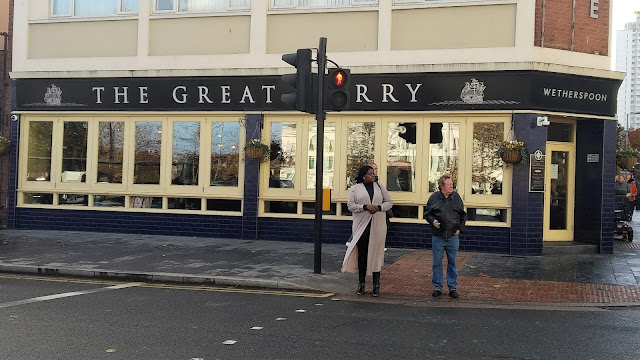 The night before the game had been a late one, coming back from a game in Wales and staying up for a while and going to sleep at 3 am. I woke up around 8, had breakfast and a bath before heading out. I stopped at Tesco for a few bits for the journey before driving to a side road near Amersham station. I knew that trains left at 36 and 44 past the hour with me then having to wait another 22 minutes for the next one. With the clock showing 10:39 I had to run for my train, proving to myself how patently unfit I was in the process. I just about made it with a minute to spare. I got the Metropolitan to Finchley Road, the Jubilee to Canning Town and eventually the Docklands Light Railway to Woolwich Arsenal. To pass the time I read my paper and caught up on my podcasts as well as having a chocolate brownie and a couple of cans of Irn Bru that I’d bought earlier. I’d taken the opportunity to tweet three pubs to ask what ciders they did, but they were yet to reply. So I headed for the most promising, The Woolwich Equitable which was supposed to have 3 real ciders on. That it did and though not normally a fan of fruit cider, I opted for the Lilleys Tropical as it was the only one I’d not had. It wasn’t unpleasant, but I’d not be having it again, especially at £4.85 a pint, which was on par with what the Chiltern Taps in Wycombe ask for the same drink. It was a short walk across the square to my 176th Wetherspoons, The Great Harry. Happily, Old Rosie was available as part of a meal deal so I had Chicken, Brie and smoky chilli burger with all the trimmings, along with a great pint for £7.65. Invariably better than the offering across the road. l then walked to the ground. It was a mile and a half with me getting there at 2.45. 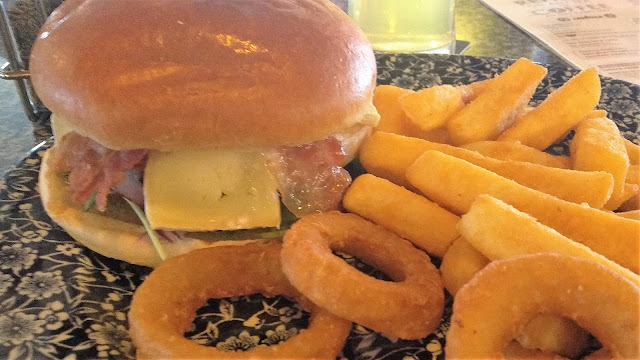 £5 entry was good value, but the basic programme was poor for £2 and made me wonder why I bother. Lydd took the lead after 15 minutes through Matt Martin as he converted a cross. I had a long wait for chips at halftime, around 20 minutes so I may have missed a goal. No mention of a goal on either Twitter but the Meridian account was saying it was 1-1 without mentioning the incident. It turned out that they had got the equaliser on 46 minutes through Thierry Fotso. The winner came on 85 minutes and it was the best goal of the game, a great low drive from the edge of the area by Alex Baccahim. That was how it stayed in what to be honest, was a pretty poor game. The rain had really started to come down by now and so I wasn’t in the best of moods as I headed for Woolwich station, chosen as I knew the way back. I got utterly drenched for the second day in a row, added to that Wycombe had lost 2-0 at Luton. I got to the station at 5.20 and had to wait nearly 20 minutes as the train was delayed. I decided against stopping to stock up on drinks and so after changes at London Bridge and Finchley Road I arrived back to Harrow On The Hill. I was soaked through but with no internet on the Underground, I had to make do with the Alan Partridge audiobook. It should have been a short wait for the final leg of my journey but the 6.55 to Amersham was delayed until at least 7.10 with it being put back time and again. Instead, I got a Chiltern Railways train back which was slightly quicker with me getting back to Amersham at 7.30. After walking back to my car and driving home, I was in by 8. The evening was spent with a few cans before watching MOTD and going to bed. 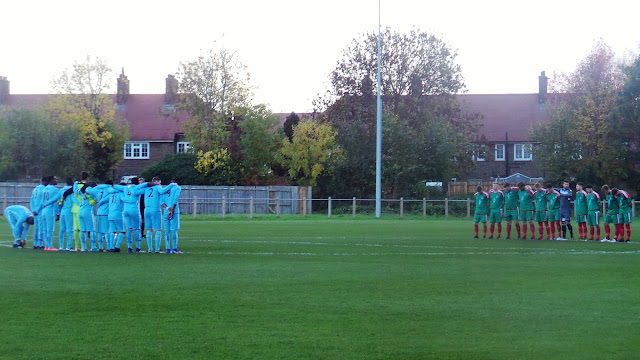 The MERIDIAN SPORTS & SOCIAL CLUB is a fairly basic ground with just the one area of cover. As is so common as a quick fix solution it's an 'Arena' stand holding around 70. It certainly earned it's keep today, providing cover and clear sightlines for the 10 people in attendance. The rest of the ground is open hard standing. There's a programme which is OK but overpriced at £2 though I do understand that the printing costs are expensive for a small scale operation. The club was nice and friendly and they deserved more than 10 fans turning up to watch them, even though the footy wasn't great.

The tea bar at the ground, or to be more precise, in the social club was excellent and had a wide range. The food is cooked to order, good for taste, but not great if you are in a rush. There's also a bar there, but I didn't check it out. Charlton and Woolwich Arsenal stations are walkable and I recommend the latter as it has a good Wetherspoons, the Great Harry and a few other places worth a visit. 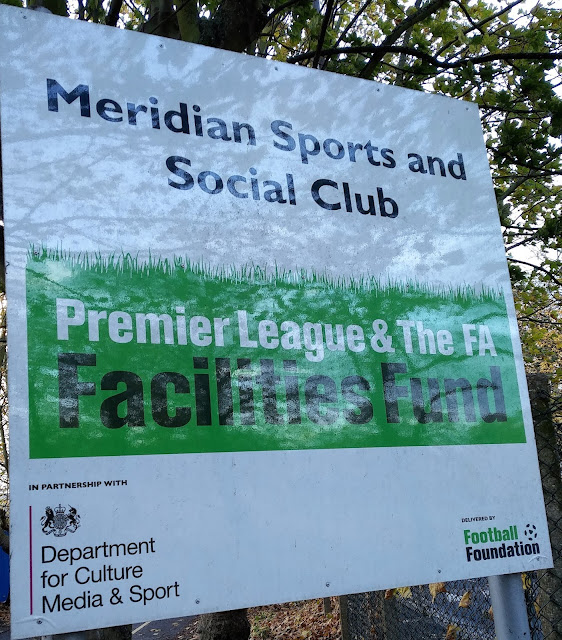 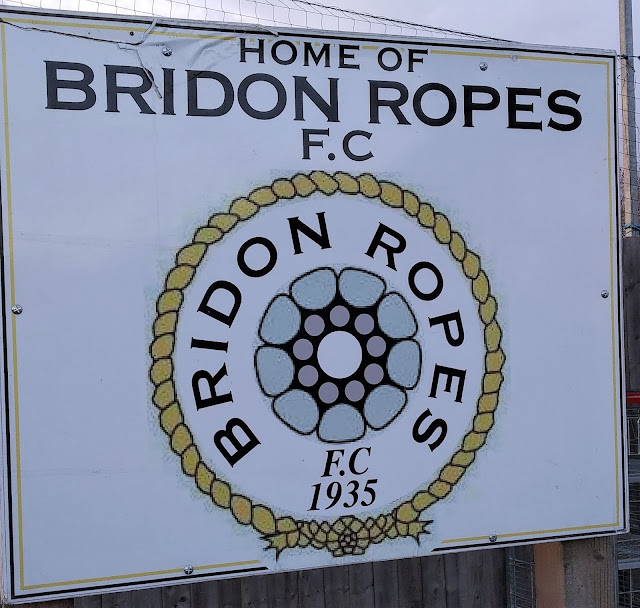 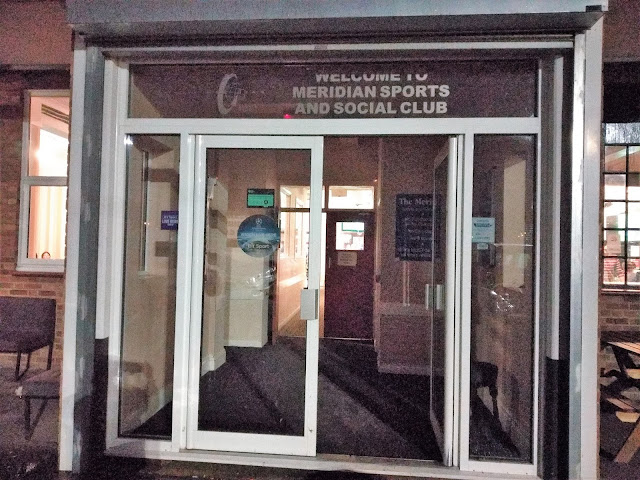 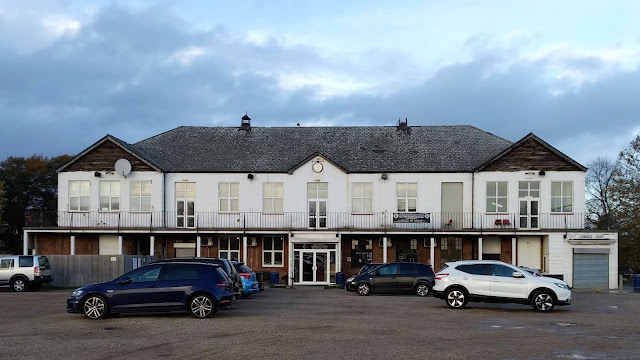 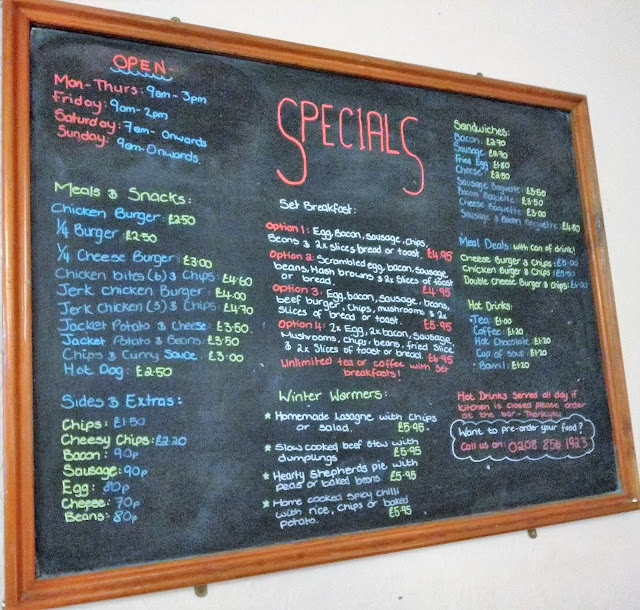 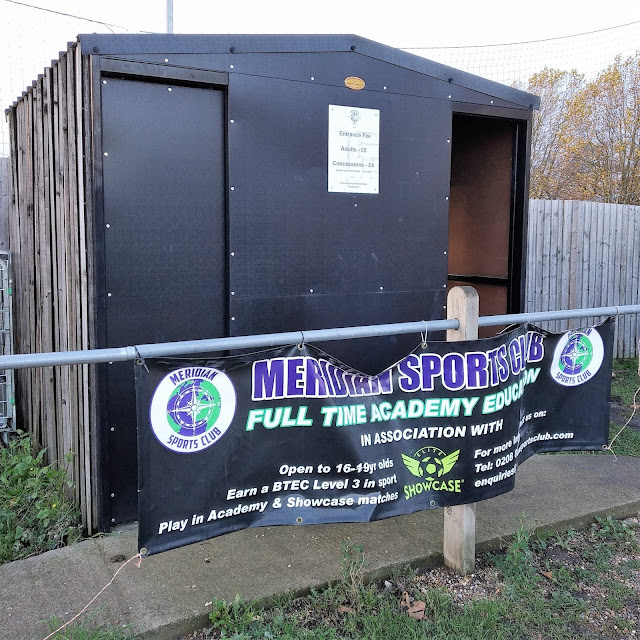 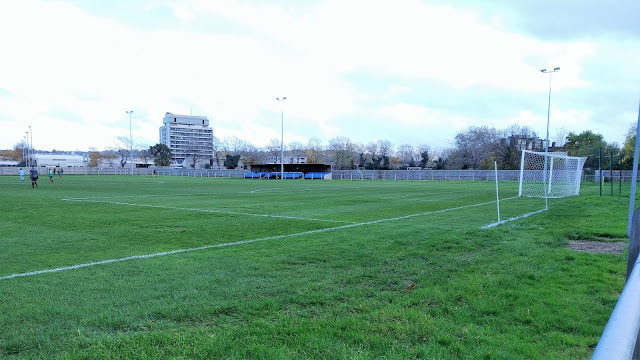 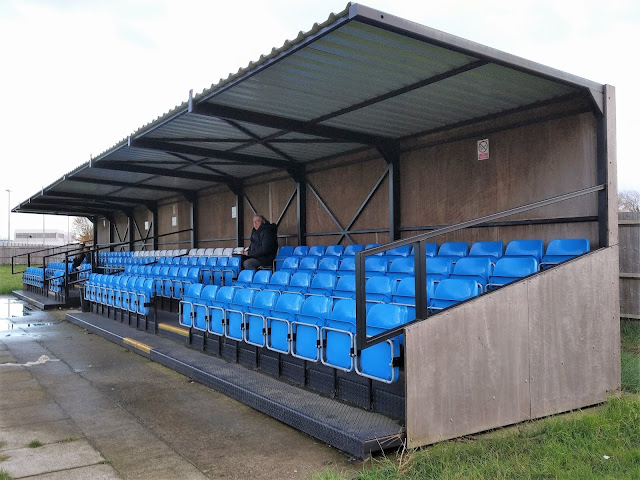 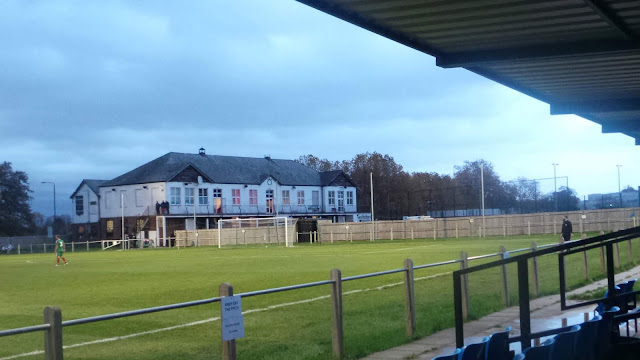 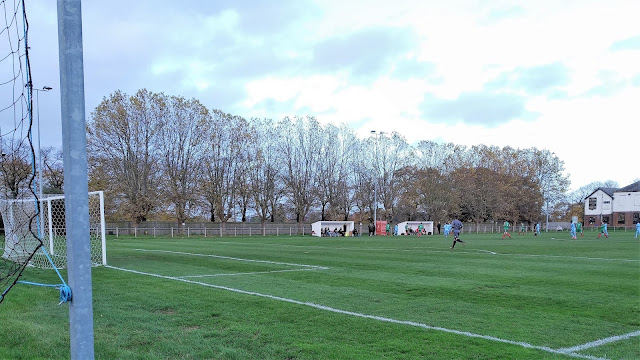 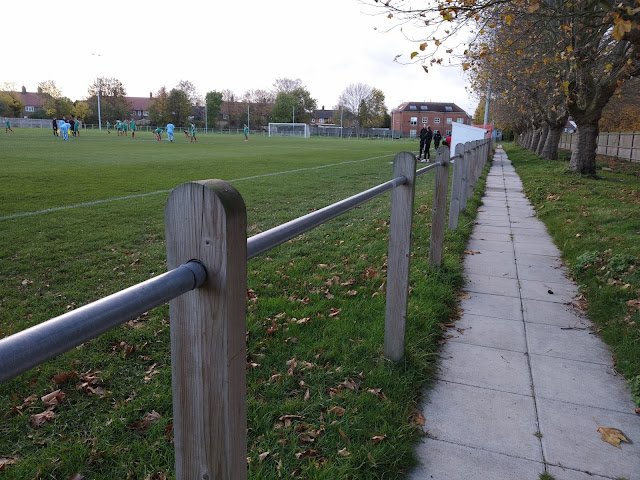 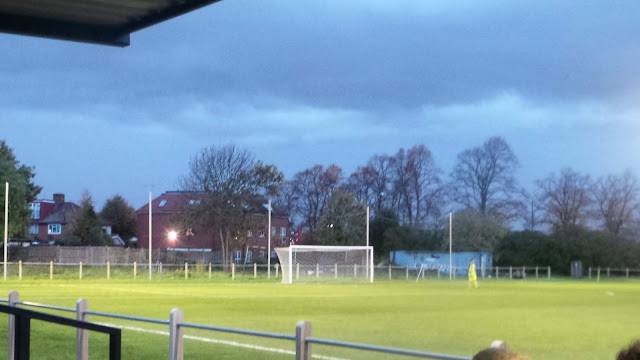