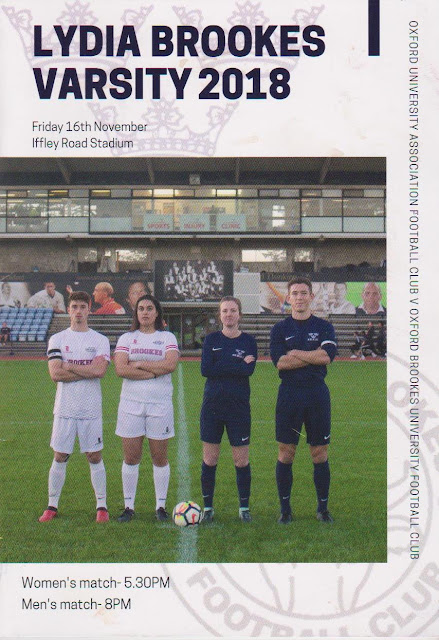 The ground is a multi-sport venue that opened in 1876. It's not to be confused with the nearby rugby ground, but it has hosted both athletics and football. Its official name is the Roger Bannister running track, named in honour of the runner of the same name who in 1954 was the first person to run a sub-4-minute mile. Bannister had previously been a student at Exeter College was elected President of Oxford University Athletics Club in 1948 and set about improving the quality of the track which had become bumpy and uneven. A couple of years later, his plans came to fruition and have seen several refurbishments, most notably in 1977, 1989 and 2007, the latter being the occasion when the track was renamed, this being the idea of former Olympic Champion, Lord Seb Coe. The stadium itself is restricted to an official capacity of 499, the reason being that since the Taylor Report following the Hillsborough Disaster, the costs of maintaining anything over a 500 capacity have proved prohibitive.

The Oxford University's Football Team have even won the FA Cup - back in 1874 they won the FA Cup, beating Royal Engineers 2-0. They were also runners-up in 1873, 1877 and 1880. The latter was the last time they entered the competition and although a team called Oxford University Press played in the Hellenic League in the early 1970's, the team currently play in the British University & College Leagues, a competition that they have not won for several years. They also play in the annual 'Varsity' match against Cambridge, a clash more well-known for its boat race. Oxford University currently has the upper hand in this fixture - out of 132 games, they have won 51 clashes to Cambridge's 49 with 32 games ending in a stalemate. It's now four victories in a row for Oxford, the latest clash coming back in March when a brace from Dominic Thelen and a goal from Leo Ackerman gave them a 3-0 win in a game played at Barnet FC's 'The Hive' ground. The two teams colours make up the quarters of a fair few teams, including my own team, Wycombe Wanderers. Back in its early days, the club provided a number of internationals including Gilbert Smith, dubbed 'the first great centre-forward who was capped 7 times for England whilst playing for the team and at least 13 times in total. The current team are managed by former Oxford United player and caretaker manager Mickey Lewis who played 350 times for the Football League club. 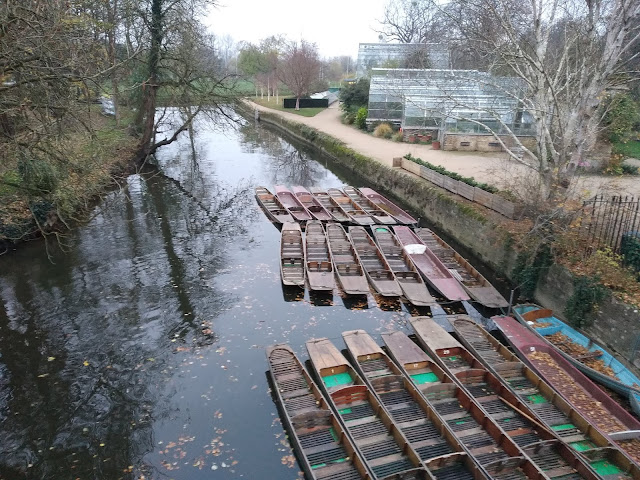 Originally on this day, I'd been hoping to do a game with fellow hopper Chris. There were two cracking options - Retford United v Retford and Pegasus Juniors v Hereford Lads Club - both local derbies. However, my plans were stymied when he informed me that he was on one of his regular jaunts down to Devon, but I did have a backup plan in place, which was nearer to home. I first learned of this game thanks to the groundhopping community who publicised this event on our WhatsApp group. At first, I was in two minds, as historic as it was, it wasn't the most appealing venue, with a running track separating you from the action. There was then the issue of parking - there were a whole load of restrictions on the roads in the immediate vicinity of the ground. The nearest pay and display car park was indicating that it would be £15 if I wanted to do both games. As ever though, further research produced better results and this time Google Street View was my friend. I discovered that I could park 10 minutes away on a road with no restrictions. The preliminary plan was to get into Oxford early, tick one or both Wetherspoons and then go to both the womens and men's games. Plans might be altered later on, but in any case, I'd bought my ticket, option for the £8.50 option which included a Burrito from a well-regarded local supplier. 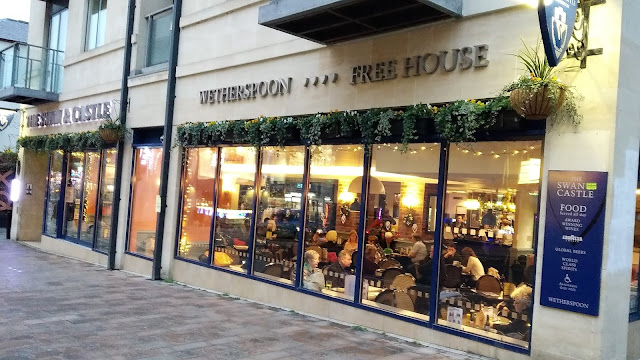 The day came and I had a fairly easy day at work, with me being out by 12 after a 7-hour shift. It gave me time to go home and relax for a bit, although I'd got my stuff in the boot of my car just in case. After getting bathed and changed, I watched TV for a bit before leaving at 2.30. An hour later, I was in Oxford, parked up in Charles Street, a 10-minute walk to the stadium and 30 minutes to the city. I chose the latter first as I wanted to tick both Wetherspoons. First up was the Swan & Castle where I caught up with things whilst supping a pint of Devils Leaf. Up next was the other Spoons in Oxford, the Four Candles, presumably named after the famous Two Ronnies sketch. Here I had a meal, a BBQ Chicken Panini with chips and a pint of Thatchers Gold for £6.39, more expensive than most in the chain. Having previously only visited Oxford for checkups at the John Radcliffe and footy, I was pleased to see the real place. It was nice and pleasant and although not one of my favourites, I still enjoyed it. There were plenty of photo opportunities, but for a big city, it was a bit limited on cider pubs, though that may be down to the research on the What Pub website that I visit. ‘There are Nine Million Bicycles In Beijing’ sang someone called Katie Melua. Well, Oxford must have come pretty close, they were everywhere you looked. 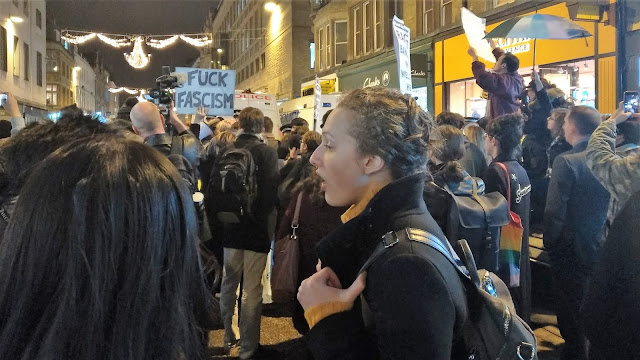 I got to the stadium at 5.30, just as the ladies game was starting. After an intensive but friendly security check, I was in. Oxford took the lead after a few minutes, Ella Vickers-Strutt slotting home after the goalkeeper was caught out of position. The Asian linesman then gave a decision to which someone disagreed with, to which the shout of ‘check his visa’ went up. Charming. The ‘gentleman’ concerned then continued to make disparaging remarks about women’s football before gladly going elsewhere with his bunch of cohorts. The game was not the best of quality but it was a good run and a tidy finish into the bottom left-hand corner by Rani Wermes that made it 2-0 around 20 minutes into the second half. Brookes were second best for much of the game but their number 15 scored the goal of the game, a cracking shot from the outside of the area that went in off the angle of post and bar. She was probably the best player on the pitch but it was all to no avail as the hosts hung on to win 2-1. A burrito between the games was decent and well worth the £2.50 paid. 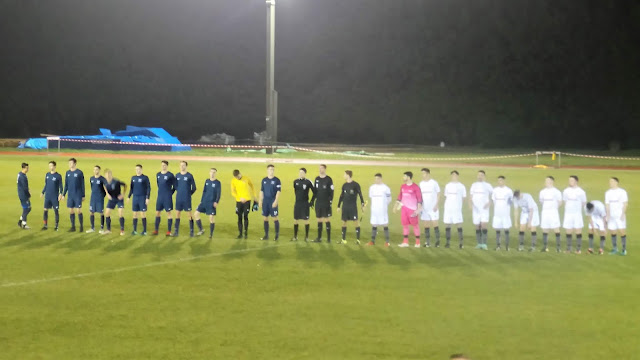 So on to the men's game. It was a fairly tame start, but Oxford were firmly in control. A penalty was awarded for a foul just inside the area on 21 minutes. Matt Naylor stepped up to convert for the hosts and make it 1-0, much to the delight of the boisterous home support. It was 2-0 on 40 minutes, a good low cross being tapped home from a few yards out by Matt Evans. Around 20 minutes from time, Oxford added a third, Chris Coveney tapped home a cross at the near post from 5 yards out. Aside from a bright spell at the start of the second half by Brookes, it was really one-sided and Oxford got a 4th with a well-worked goal a few minutes from time, scored by Jake Duxbury. It had been a good day out and good value at £3 per match, plus £2.50 for a burrito. The game finished at 9.50 and from there it was around 15 minutes back to my car. Usually, Friday night is Two MIkes night, but they were having some well-earned time off from TalkSPORT. Instead, I listened to Simon Mayo's Confessions Podcast, getting home at 11. I typed my blog while watching my YouTube subscriptions before going to bed around 1 am.

IFFLEY ROAD or the ROGER BANNISTER ATHLETICS TRACK is a reasonably decent ground. Primarily an Athletics venue, the only accommodation is a covered seated stand with an official capacity of 499. The view is not that bad as there is not much wasted space between the track and the pitch. Food and drink is very much of the pop-up variety - on my visit the burritos were very good, but the only booze was in cans. There are pubs, shops and takeaways within a few minutes of the ground, or the edge of Oxford city centre is 15-20 minutes away. Oxford has two Wetherspoons, the Swan & Castle is by far the nicest one of the trio. 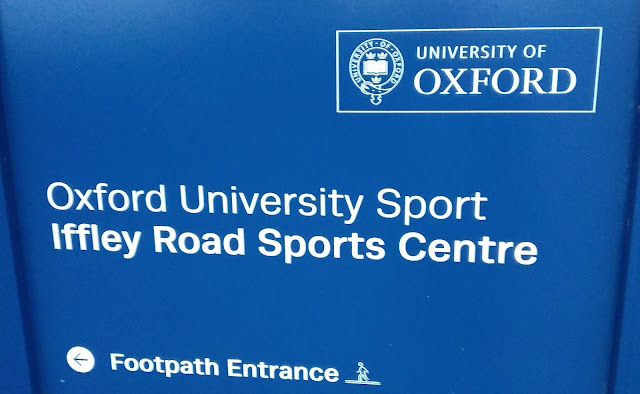 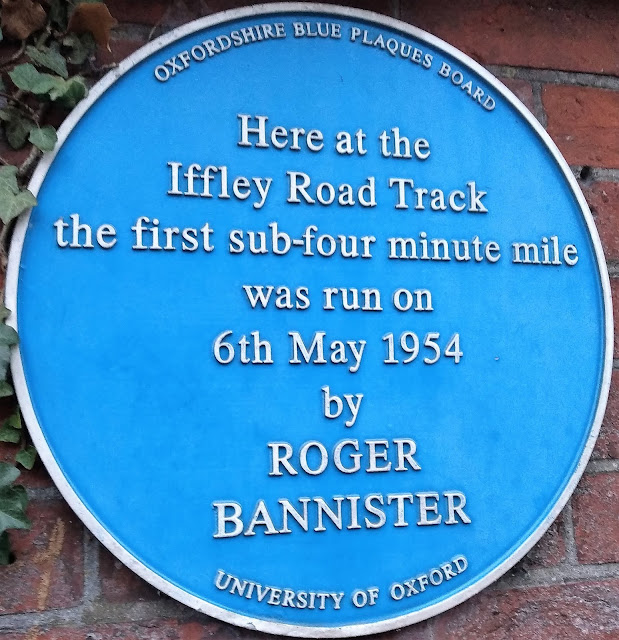 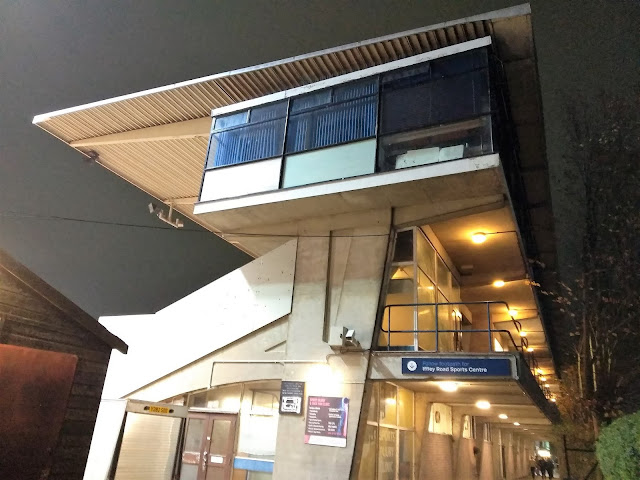 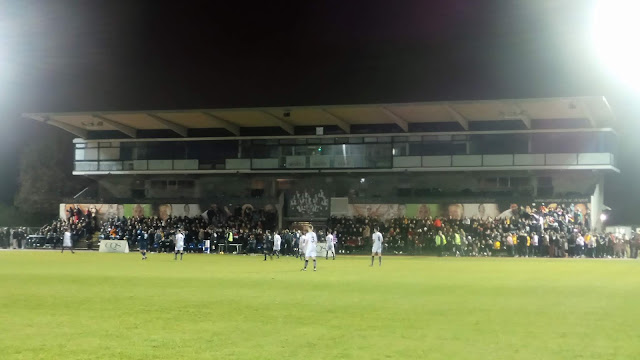 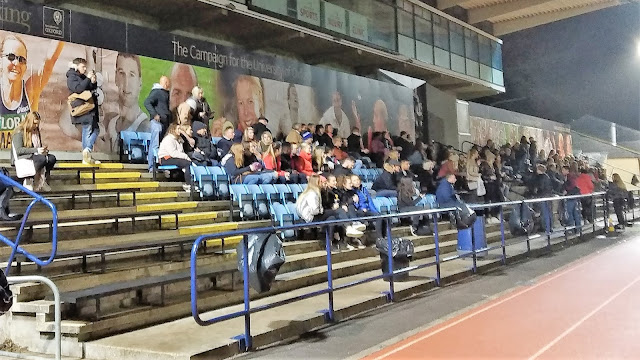 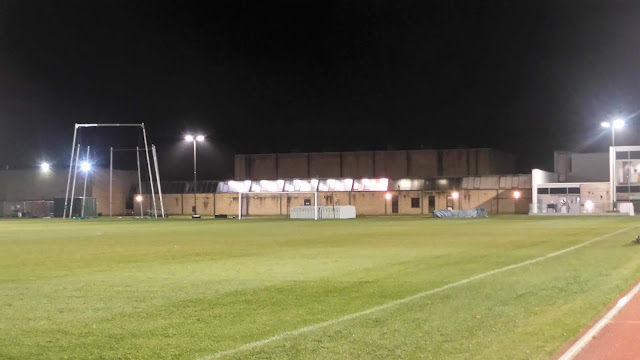 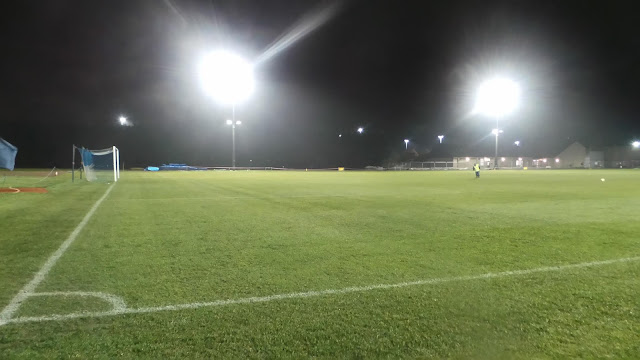 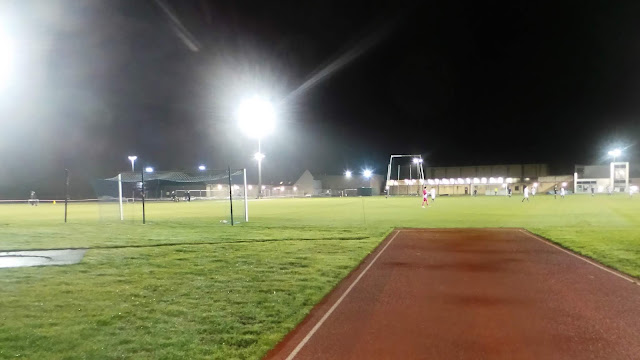