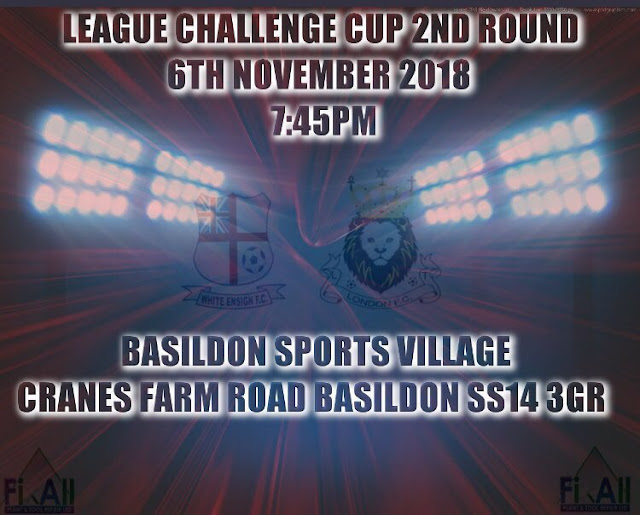 The club was established in 1951 and name comes from Naval connections. They spent their first 51 years in the Southend Borough Combination prior to joining the Essex Intermediate League in 2002. Starting in Division 2 (step 8 of the non-league pyramid) they were champions in their first season and this brought about a period of great success. White Ensign would be Essex Intermediate League (renamed Essex Olympian League in 2005) in four of the next five seasons. After the 4th of these wins in 2008, results tailed off somewhat but the club would remain in the Essex Olympian Premier until 2014 when they were relegated to Division 1. They'd bounce back as runners-up to Harold Hill in their first season to return to the Premier Division at the first attempt. Finishes had been mixed since their return, but 4th last season was their best in ten years. Due to the expansion of step 6, more specifically creating a league for Essex, they were invited to join the Eastern Senior League Division 1 South at the start of this season. White Ensign have made an incredible start to the season and sit in 2nd place at the time of the game, 3 points behind Halstead Town but with a better goal difference and a game in hand.

Following their move to the Basildon Sports Village. a move they needed to make as a condition of them being admitted to step 6, they entered the FA Vase for the first time this season. They went out at the first hurdle, losing 4-2 at Essex Senior League side Stanway Rovers. Local cup wins include the Essex Olympian Senior Challenge Cup three times, the Capital Counties Feeder League Trophy on three occasions, The Essex Olympian Senior Cup twice and the Essex Premier Cup in 2008. White Ensign's most famous former player is Paul Benson who was snapped up by Dagenham & Redbridge after scoring an incredible 107 goals in 65 games for them. 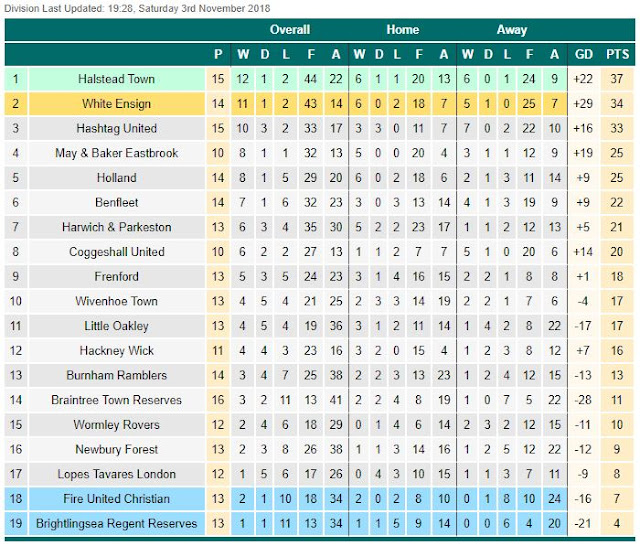 I was glad to have Anwar back with me hopping after he had taken a break for a few weeks. There wasn't a huge amount on offer, even more so if I wanted to stick to a lowe budget. The two most cost-effective options were Peterborough Northern Star v Sleaford Town and White Ensign v Lopes Tavares. After consulting my fellow hopper, we eventually plumped for the latter as it was slightly nearer. It was also an interesting tie with the visitors appearing to be made up of Brazillian & Portuguese nationals living in London. There were a couple of drawbacks though - as smart as the stadium looked, the viewing area was a fair way from the pitch thanks to the running track and other extras. Also, there were not a lot of dinner options, with most places in Basildon shutting at 6 as I discovered when I stopped there on the way to Bowers and Pitsea a couple of years back. So, with cost and time in mind, I planned in a stop at McDonald's en route. It wasn't the best food in the world, but I had a voucher for a Big Mac & Fries which I'd use if I could customise it to have without the sauce. 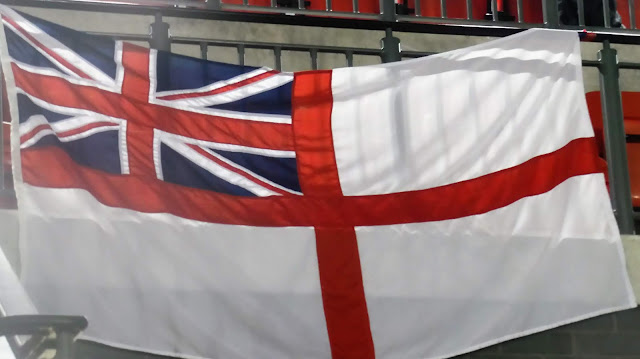 The day of the game bought about the usual drill on my day off whilst in the afternoon I looked at potential grounds to do on the train this weekend. An initial list of 30 was eventually whittled down to 4 after high costs ruled most out, the most likely being Meridian v Lydd Town which is near Charlton and is in the London Oyster card zone. I also sorted out some photos prior to leaving home at 4.30. I got to Anwar at 5 and once we had got through Aylesbury’s woefully inadequate road system, we had a good journey. I got to McDonald's at 6.40 and though I was unable to use my voucher due to it being a different franchise, I still got a double cheeseburger with bacon and large fries. Once I’d customised it on the machine to take out the bits I don’t like, it was decent for £3.28. From there we made our way to the ground, getting there at 7.10. Entry was a fiver, but for once I didn’t bother with a programme, seen as I am rapidly running out of space. I’m always sceptical about grounds with running tracks, but in this case, the view from the top of the stand was good enough. There were some decent tunes being played pre-match, so I listened to these while typing my blog before kick off. 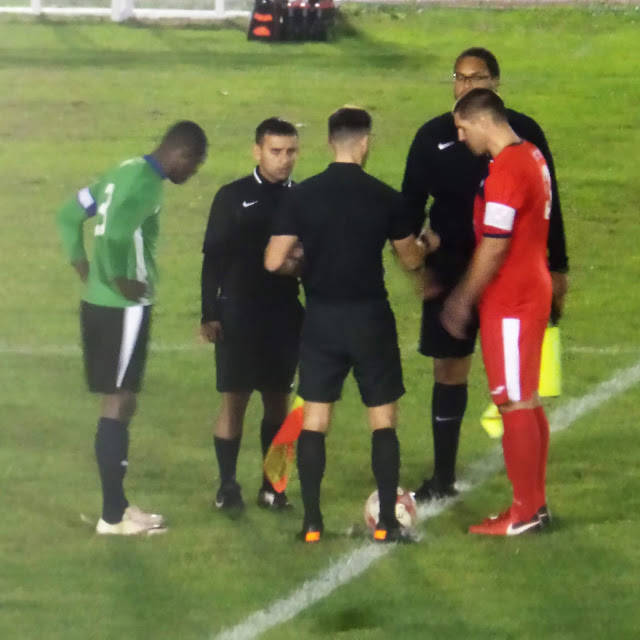 There was no sign of the away team though, presumably they got caught in traffic. Eventually, they appeared at 7.55 much to the annoyance of the referee who let them warm up on the pitch for a few minutes before they made their way back in. He made them wait in the tunnel rather than go back to the dressing room, the game eventually kicking off at 8.03. White Ensign had the first chance, heading against the bar in the opening few minutes. The visitors were having chances of the own and headed against the bar themselves, heading the rebound home to lead on 9 minutes when they reacted quickest. Lopes Tavares had a few more chances, but the hosts equalised on 21 minutes. A corner was put in from the right, the ball was headed on and a grateful goalscorer nudged it across the line. White Ensign took the lead a minute later with a cracking goal, a shot from the edge of the area that flew in the top corner. It was 3-1 on 40 minutes, the goalkeeper being caught out of position and leaving the White Ensign man with a fairly simple finish from around 10 yards. The first half eventually finished at 8.49. Lopes Tavares pulled a goal back on 47 minutes, a low drive from inside the area reducing the arrears. The visitors came close to equalising a couple of times but White Ensign appeared to have made the game safe, the visiting keeper getting a glove on the low shot, but unable to prevent White Ensign making it 4-2. Another poor error from the visiting goalkeeper allowed White Ensign to make it 5-2 with a couple of minutes to go as he was caught out of position again. A penalty was awarded for a foul in the area in the last minute which was successfully converted to make it 6-2 and the hosts even found time to hit the bar in injury time in what was a comprehensive victory. Twitter and the league website were not forthcoming with what order the goals were in, but I know that White Ensign's were scored by Dominic Locke (2), Paoletti (2), Connor Barnby & Brett Munyard.


Due to the delay at the start, it was 10 by the time we left. We'd learned of Wycombe crashing out of the worthless Checkatrade Trophy after a 3-0 defeat at home to Oxford. The fact that we can win 2 out of 3 games and still not go through sums it up. By all accounts, we played poorly from what I heard, but my sympathy is limited for the 1000 plus Wycombe fans who turned up to support a competition that should be boycotted for the good of football. Whether the authorities admit it or not, it's widely believed that it's a sneaky way to try and get Premiership youth teams in the lower tiers of the Football League, which should not be tolerated. We had a good journey home, with me dropping Anwar off at 11:05. I got back myself at 11:30 and although I went straight to bed, it took me ages to drop off. Thankfully, I wasn't too tired when I awoke for work at 4 am the following morning. 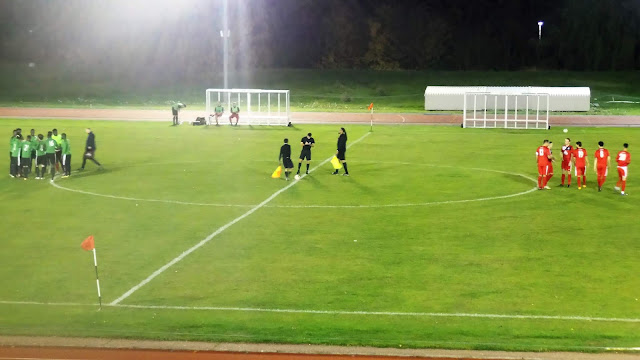 
The BASILDON SPORTS VILLAGE is part of a huge sporting complex and as a result, has plenty of parking. The stadium itself has a running track and a very attractive stand which seats 750. Views from here are surprisingly decent but really it’s the only official place you are allowed to view from. The rest of the ground has flat standing, but it’s quite a distance from the pitch. There are basic hot drink facilities at the ground, plus machines selling chocolate bars and cold drinks in the sports centre itself. Otherwise its a short walk to town or the Festival Leisure Park, both of which have a good range of eating and drinking options. 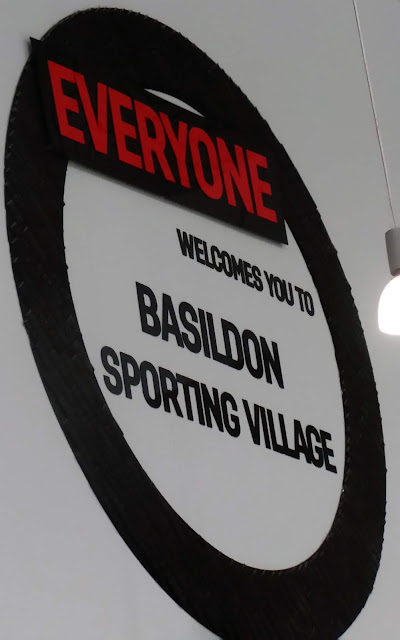 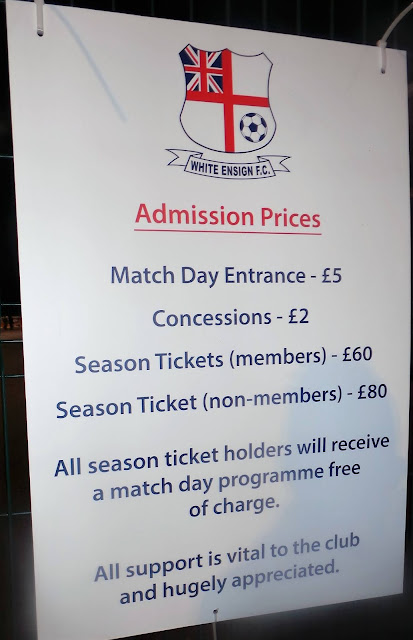 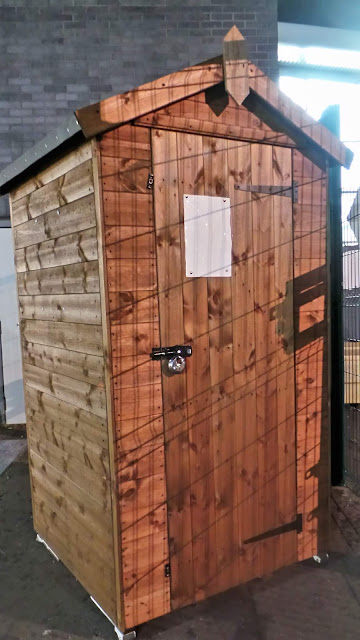 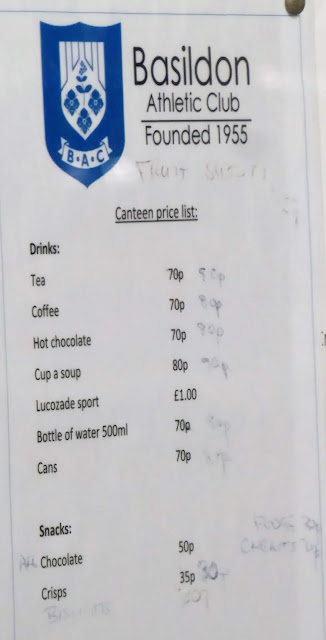 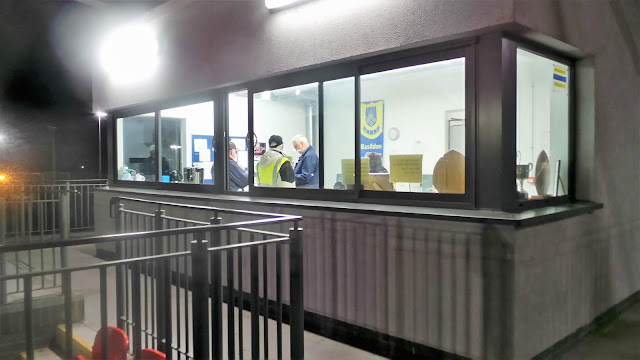 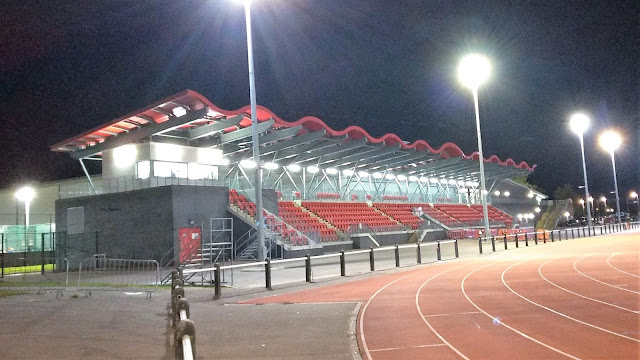 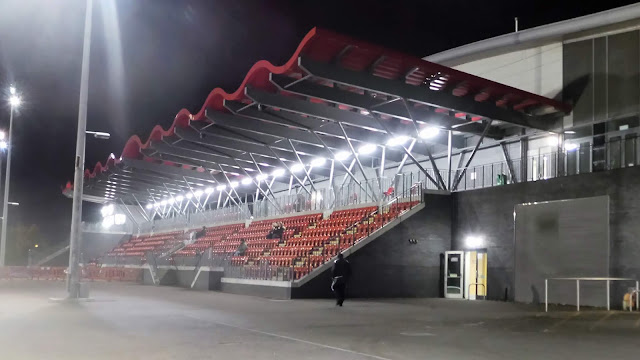 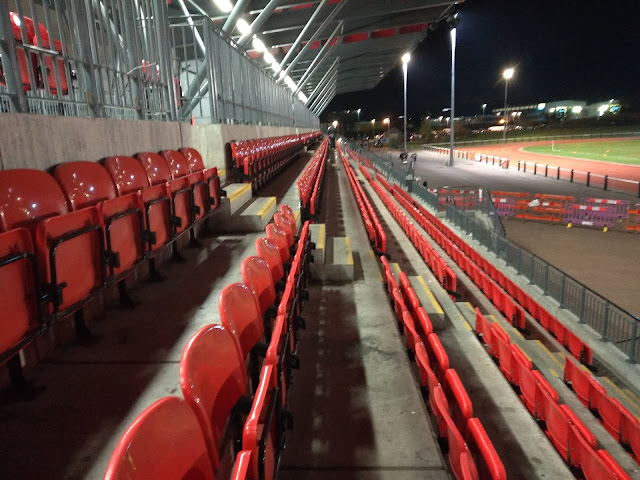 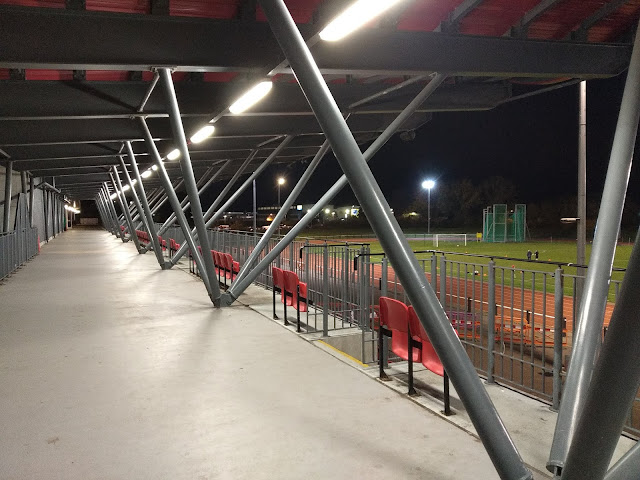 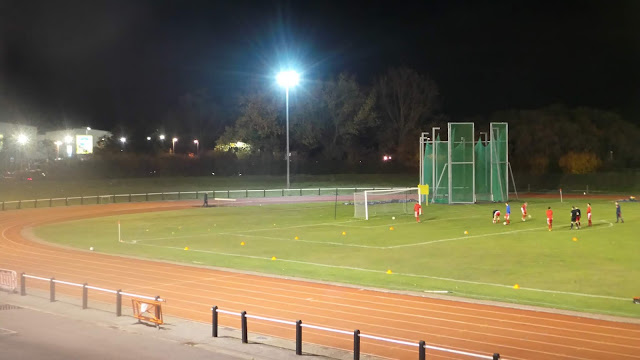 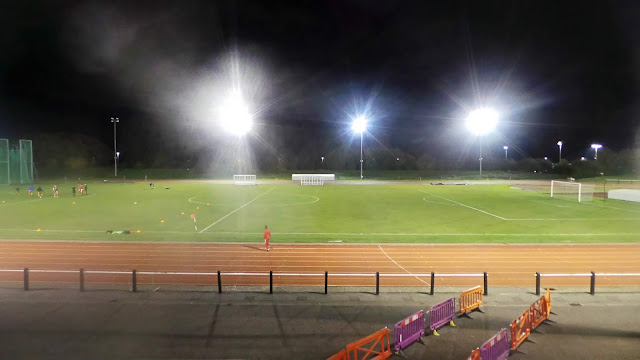 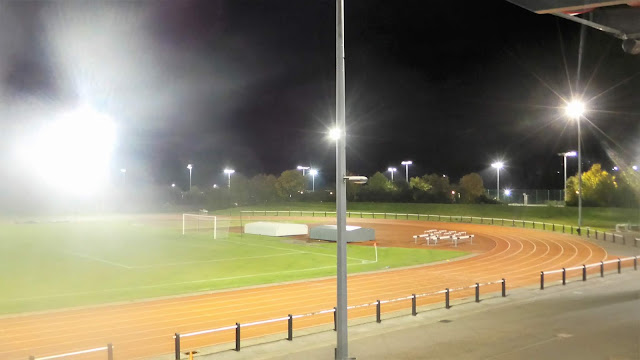