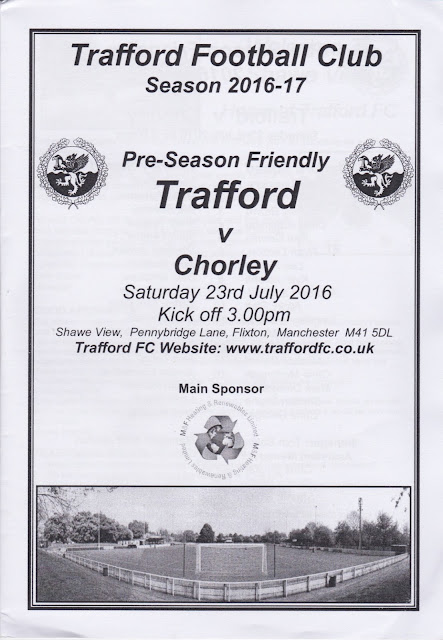 1:  The club were formed in 1990, originally under the name of NORTH TRAFFORD. They changed their name to the current one at the end of the 1993/94 season.

2:  The club started out in the Mid Cheshire League's second tier, finishing runners-up behind Newcastle Town Reserves in their first season. This was enough to gain promotion, with them finishing 4th in the 1st Division in the 1991/92 season.

3:  In 1992 they joined the North West Counties League. They started in its second tier. They won promotion to the top tier in their second season, finishing runners-up behind Haslingden in 1994. The success continued with high league placings and by 1997 they were champions, winning promotion to the Northern Premier League. They would return to the league following relegation from 2003 until 2008 and despite struggling at first soon turned things around and were Champions again.

4: Their first spell in the Northern Premier League's second tier brought mixed fortunes with a 5th placed finish in NPL D1 in 2001. A couple of years later however, they were relegated back to the North West Counties League. The second spell was a bit better, finishing 4th in 2013 and beating Cammell Laird in the playoff final. Their third spell began last season, with a solid 8th placed finish following 2 seasons away.

5:  Between 2013 and 2015 Trafford were in the NPL Premier, They had their best ever league finish in their history in 2013/14, finishing 10th.However, they were relegated the following season after finishing second bottom.

6:  Trafford have made their best progress in the FA Cup on three occasions. They reached the 3rd Qualifying Round in 2006 (losing 1-0 at home to Harrogate Town), 2012 (losing 3-1 at home to Marine) and 2013 (losing 4-2 at Corby Town). The latter of those runs is notable for a victory over higher league opponents in Altrincham, who would go on to gain promotion to the Conference Premier at the end of that season.

7:  The 2000/01 season saw their best ever FA Trophy run as they reached the 3rd Round. They even managed to force a draw against Conference side Telford United who would go on to finish 6th in the Conference that season. Class would tell on the replay though as the Shropshire club triumphed 7-0.

8:  Trafford's best-ever run in the FA Vase came in the 1995/96 season. Their run actually encompassed 8 matches as it took 3 replays to beat Selby Town. Their run eventually ended in round 5 as they lost to Lincolnshire outfit Brigg Town.

9:  Other cup achievements include winning the Northern Premier League's Presidents Cup in 2000 and 2009.

10: The record attendance at Shawe View came in August 2013 as 1.374 attended the NPL Premier Clash with FC United.

After leaving my previous game at Wythenshawe at 12.50. I made good time on the way to my game at Trafford, arriving just after 1PM. First port of call was the local Wetherspoons, the Tom Bobbin. It was my hundredth in the chain but I was unable to find the one cider that I needed to complete the festival. Sadly 'Driftwood' was not found, even after they looked out the back. Instead, I had a pint of Hallets before walking back to the ground. On the way back I stopped at Urmston Fish Bar which was voted 'Best Chippy in Greater Manchester' 2014. To be honest it wasn't much better than average though I still enjoyed my generous portion of pudding, chips and peas for £3.75. 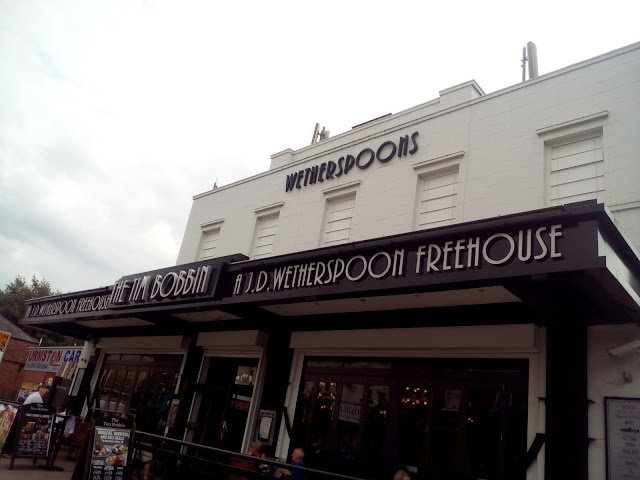 I walked back to the ground, getting some things out of my car, on my way to the turnstile. Entrance was a very reasonable £5, plus there was a cut-down programme for 50p which filled me in on all I needed to know ahead of the days clash.  I sat on the grass banks and eat my lunch, basking in the glorious sunshine. Later on I'd meet Sean, a fellow groundhopper who has the same sort of tastes in pubs, football grounds and chip shops as me. It was a random meet on Facebook sometime ago but we have kept each other entertained with various comments and photos over the years. In life he was just as good company, and plans were already made to meet up in the future, either when I visit Manchester in early September or another time in the Midlands. 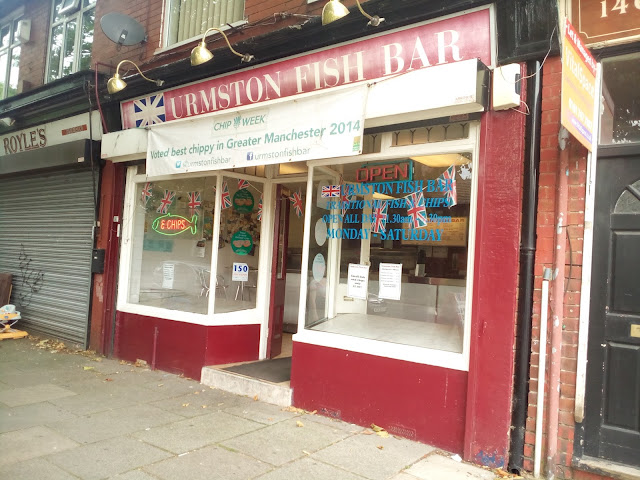 The game started off at a decent pace but there wasn't much in the way of clear-cut chances. For a long while, it looked as if it would end goalless - especially when Chorley hit the bar with what would be their first penalty of the game on 67 minutes. Josh O'Keefe stepped up confidently but his effort cannoned off the bar and away to safety. They eventually did take the lead a few minutes later though as Sefton Gonzales rounded the keeper to put his side ahead. Though Chorley had the better of the first half, it had been a lot more even in the second. On 73 minutes Trafford were awarded a penalty of their own and Chris McDonagh blasted it past the keeper to level things up. Chorley would go on to miss their second penalty of the game with a few minutes to go - this time ex-Barrow striker Jason Walker had his effort expertly saved by the home keeper. 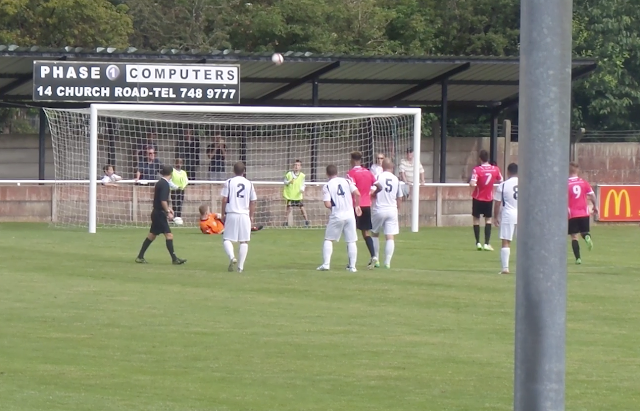 I said goodbye to Sean and his son, Robson before going on to ASDA at the Trafford Centre to get petrol. After filling up, I left at 5.20, listening to various things on the way home. The highlight was BBC Radio Leicester's coverage of the Celtic v Leicester City game which I had on pretty much all the way from Stoke until I lost the signal in Oxford. Sadly that was just before the penalty shoot out commences and after listening for 2 hours I missed the most exciting bit. For the record, I found out later, whilst writing this blog that Leicester had triumphed. I was home by 8 and was pleased that my cider box had arrived. I had a couple of bottles while catching up with what had occurred in my absence. 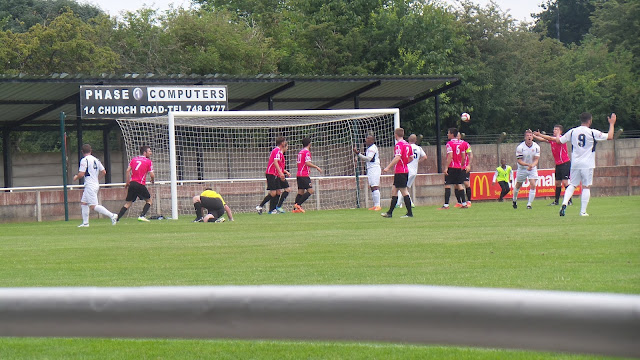 It had been a good but unhealthy week, as well as an expensive one.  Of course that had to be paid for somehow, but even so, I was seriously not looking forward to waking up for work at 4am the following morning. I got to sleep at 10.30 and had a reasonable night's kip, but I was correct to be apprehensive about going back. Every day seems to be full of nasty surprises at the moment and the Sunday morning would prove no exception. I feared the worst when I saw our supervisor striding towards me, a decent enough person but always the bearer of bad news. Before I'd even got out of my car I was told that I'd be travelling 20 miles to a village in Oxfordshire called Wheatley to help out at their store. I'd not even been consulted or asked if it was OK with me and I was only one of about 20% of my department that had been sent there. It was not what I wanted on my first day back, especially as Sunday is usually the nicest day to work in our store. I had to give someone a lift too, and it was a right poxy little store, so much so that I expected Arkwright and Granville to be running the show. I did it under duress as there was no one around to explain the decision and worse still I've got to go there every Sunday and Thursday for around the next 6 weeks, with no concrete information on how I am able to claim my petrol expenses. 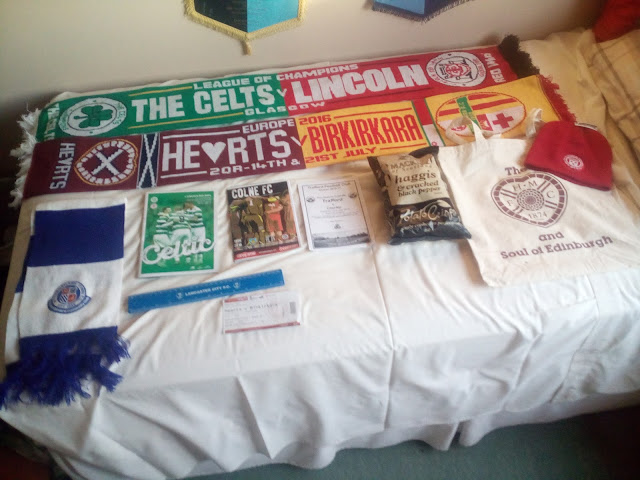 SHAWE VIEW was a ground that I visited on the way to another Wycombe away game and I was given such a friendly welcome that I was looking forward to returning some years later as a groundhopper. At the time they were in the North West Counties League, but following my visit they had had a good few years, going as high as the NPL Premier before settling at step 4. There is plenty near the ground if you are prepared to walk, and the Tim Bobbin Wetherspoons is probably your best bet pre-match if you have time.

As a result, I didn't try much in the ground, but I noticed that they had Stella Cidre on tap amongst other things. The tea bar looked decent, but I didn't sample any of its wares. Merchandise was a touch on the expensive side, with a scarf costing £10 but that's the problem when the club has to order things in smaller quantities. There are 3 areas of cover, 2 seated with capacity for around 350 sitting fans. One also has a standing area behind, and around  650 can stand under cover. With a further area of terrcaing and grass banks, the ground has an official capacity of 2500. Everywhere is very well kept and it was a nice place to spend a sunny afternoon in July. 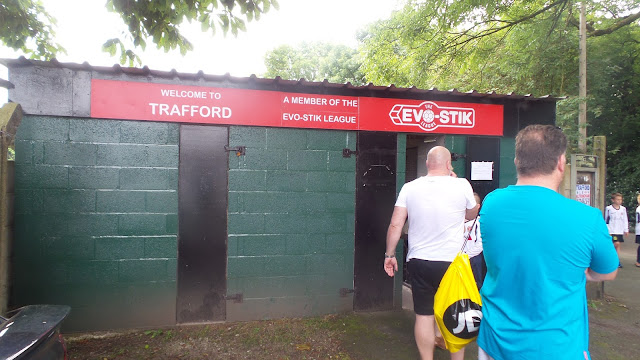 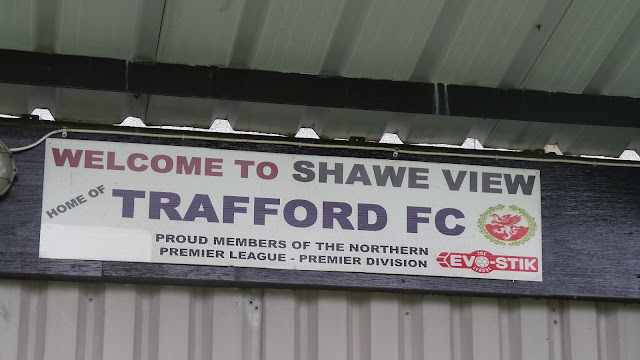 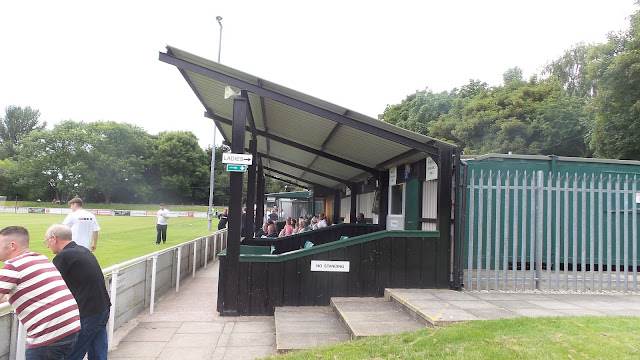 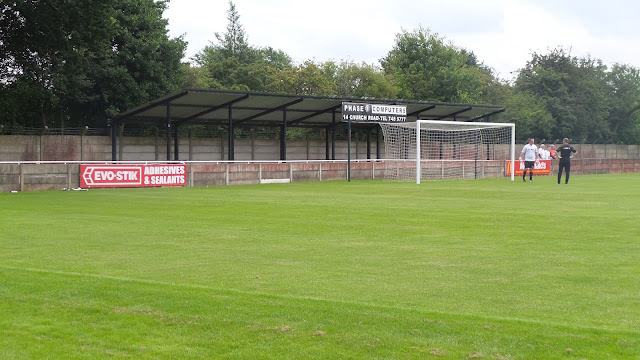 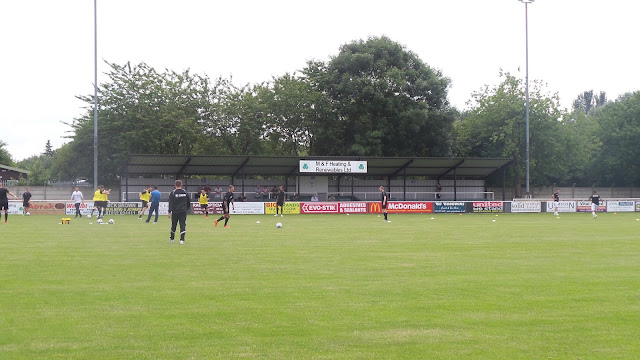 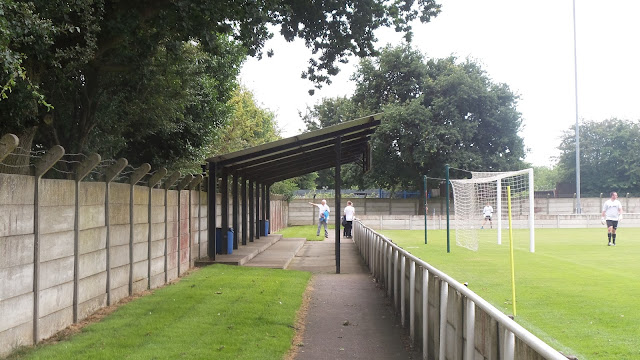 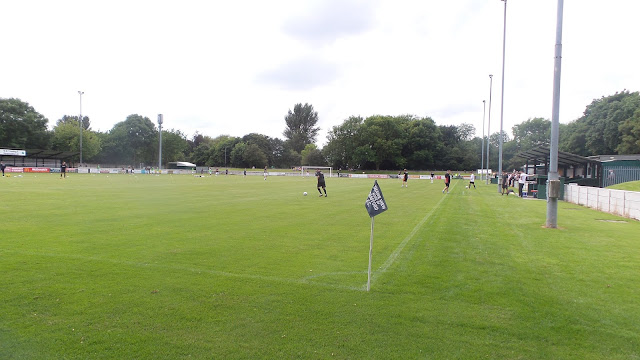 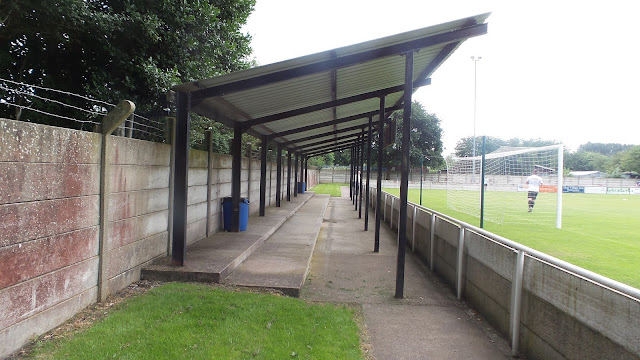 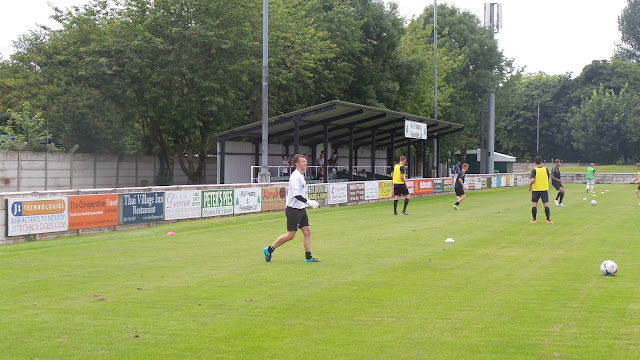 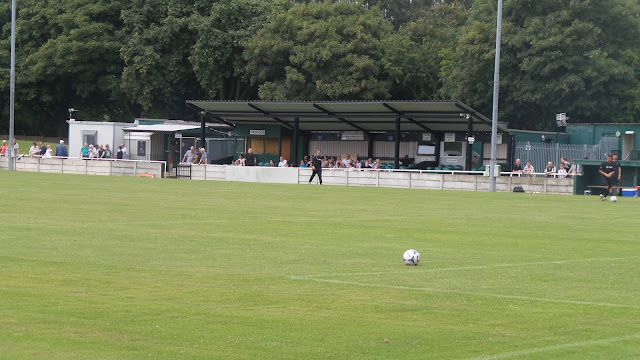 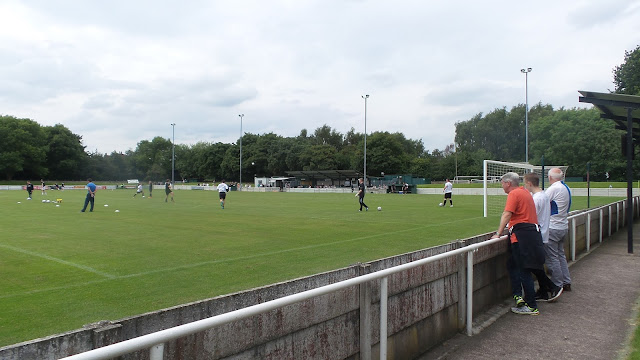 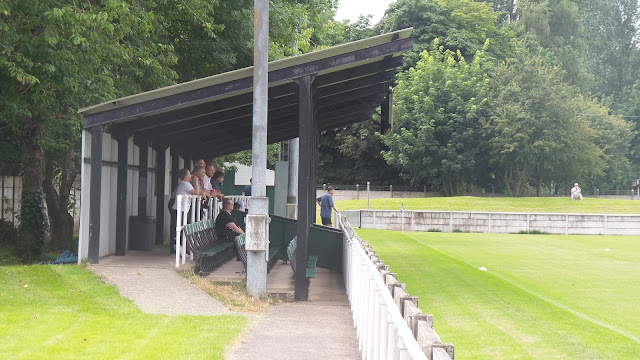 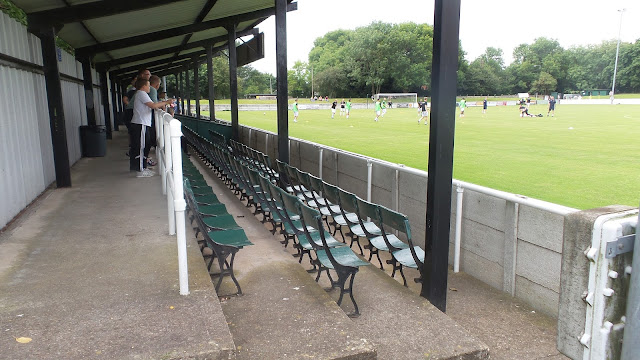 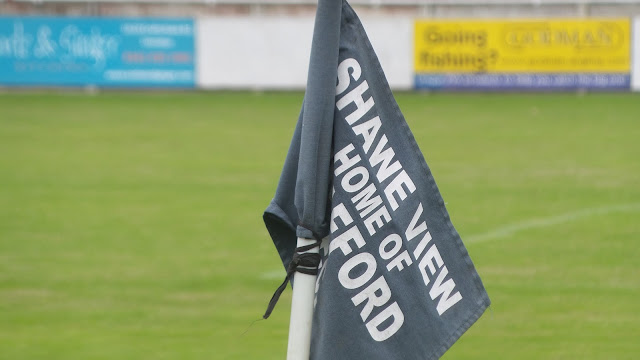 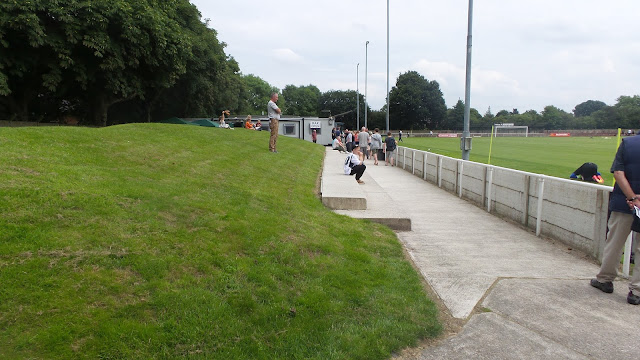 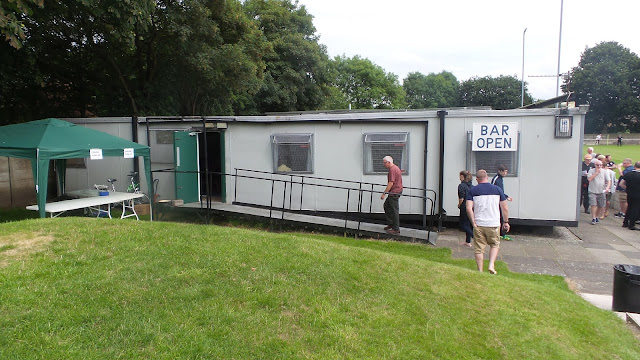