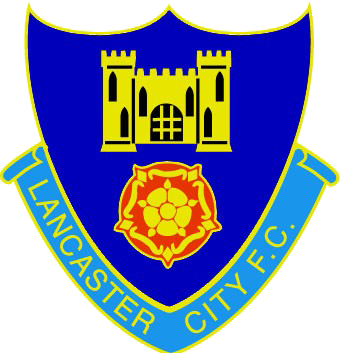 1:  The club were formed in 1911 as Lancaster Town following the demise of 2 former clubs in the town namely Skerton & Lancaster Athletic. They changed their name to Lancaster City in 1937 as the town was given city status by King George VI as part of his Coronation celebrations.

2:  They have played at the wonderfully named Giant Axe since their inception. The ground got its name as the sports club that the ground was part off looked like an axe head when viewed from above.

3:  The team started their life in the Lancashire Combination, though they struggled at first, finishing bottom in their first 2 seasons. Things soon improved though and they were runners-up in 1914/15. The league resumed as a single division after the war with a runners-up spot again achieved in the first season back, then winning the league on four occasions in 1922, 1930, 1935 and 1936.

4:  Lancaster City were founding members of the North West Counties League in 1982. Financial difficulties beset the club at this point and after starting in the league's top tier they were relegated to the second tier in 1985 and generally struggled until they left 2 years later.

5:  The club were founding members of the Conference North, following the reorganisation of the non-league pyramid in 2004. They finished a credible 13th in their first season, though in 2007 they were relegated with a single point after they were docked 10 points for entering administration.

6:  For the remainder of their history Lancaster City have been in the Northern Premier League. Their best ever finish of 3rd in the Premier Division came in 2002. Since their return in 2007, they have been in Division 1 North. 2009/10 saw a second placed finish with a mammoth 96 points, however, they lost out to Colwyn Bay in the playoffs. Desoite having home advantage, they lost 1-0 to a side who finished 21 points behind them in the normal league season.

7:  Lancaster City's best ever FA Cup run came in the 1972/93 season. Starting in the 1st Qualifying Round they beat Fleetwood, Bacup Boro, Great Harwood, Boston United and Barrow before a narrow 2-1 defeat to Notts County.

8:  The 4th Round of the FA Trophy was reached in the 2004/05 season before a defeat to local rivals Morecambe. The FA Vase 2nd Round has also been reached a few times.

9:  Lancaster City have won a number of local cups including the Lancashire FA Trophy on 6 occasions.

10: The record attendance came in 1927 when 7,526 attended the FA Cup 4th Qualifying Round game against Carlisle United.

As I was staying in Scotland for 2 days on the Wednesday & Thursday, I decided I wanted to break the journey with an overnight stop halfway up to split the driving. Various options were considered, but I eventually plumped for Lancaster City v Morecambe. I'd wanted to visit the Giant Axe for a long while and with it being so far north, this was an ideal opportunity. Initially I looked at accommodation in Lancaster, but due to high prices I decided to stop in Morecambe and get the train in. I found a B&B for £27 a night & booked it all up around a week before the game.
I'd spent the previous night out for my birthday. I went down the local Wetherspoons and had a 14oz Aberdeen Angus steak with all the trimmings as well as Scampi on the side. It certainly filled me up and it was washed down with a few pints of cider, with me ticking another 3 off the cider festival list to bring my total up to 21 out of 30 tried. As a result, I fell asleep pretty early, which was just as well, as the hot night meant that I was awake from 3.30am. Unable to get to sleep I read a bit on my Kindle and started watching my box set of 'Only When I Laugh' starring Richard Wilson and James Bolam. I love discovering random sitcoms and this was pretty decent and a much appreciated birthday gift from my parents. I eventually did get back to sleep for a couple of hours, getting up at 9.15 and not really in a rush to make my previously planned departure time of 10.00. I'd been in contact with my B&B in Morecambe the previous night and check in was unavailable until 3.30PM. 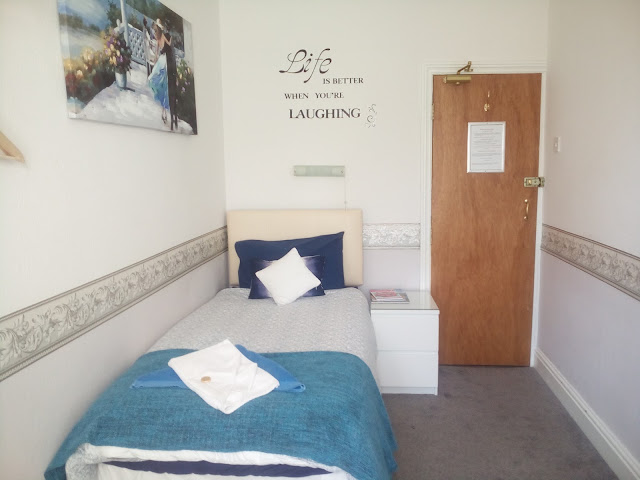 I left at 11.30 and made good progress, bar a few slow spots for roadworks. Around 20 miles in I realised I'd left my Celtic ticket at home as well as my toothbrush and toothpaste. It's pretty standard for me to forget something, luckily I can get a reprint of the ticket and replacements for the teeth cleaning stuff. I popped down ALDI and got a few bits and went back to my hotel.  The owners were not there yet,  leaving me with around a 20 minute wait to check in.  It wasn't a problem though as I chilled in the sun and caught up online.  It had been a warm journey up with it reaching 32 degrees and the air conditioning on full blast a lot of this time but it was nice and shady at the front of the hotel.  There were also a couple of Germans staying who were pretty relaxed seeing as they had been waiting a couple of hours. Eventually, I got in at 4.15, spent 10 minutes in my room and went to Morecambe.  As I was delayed I only had time to tick the local Wetherspoons, the Eric Bartholomew.  They had a decent range of ciders on,  but none of the 9 that I needed to complete the festival. I did at least have a Midnight Perry which I'd not had for a while but was keen to get to Lancaster as they had 2  Wetherspoons establishments. 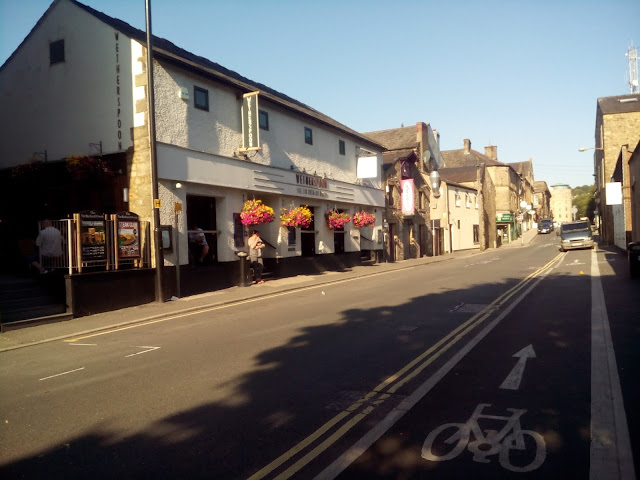 I walked to Morecambe train station which was so quiet it looked like there had been a zombie apocalypse.  Nowhere to buy tickets and a half hour wait for a train during peak hours due to a 10-minute delay. There'd also been no mention of the game on the Lancaster City twitter feed.  A post on the Morecambe academy account reassured me but the lack of communication and publicity might explain why Lancaster City are punching below their weight and it's a shame that the potential appears to be wasted. Luckily the delay didn't amount to much but I still would have liked more time.  At least I got another couple of ciders ticked in the first pub,  The Sir Richard Owen.  Fruit Bat and Red Hen were crossed off the list to bring me up to 23/30. Google indicated that the second Wetherspoons,  the Green Ayre was closed,  I double checked and this was true.  Before making my way to the ground I got Doner meat and fries from a local takeaway for £4. It was a bit of a pain getting to the ground as Google maps got confused what with the GPS signal bouncing off all of the high buildings. Eventually, I got there though, with around 20 minutes until kick off. 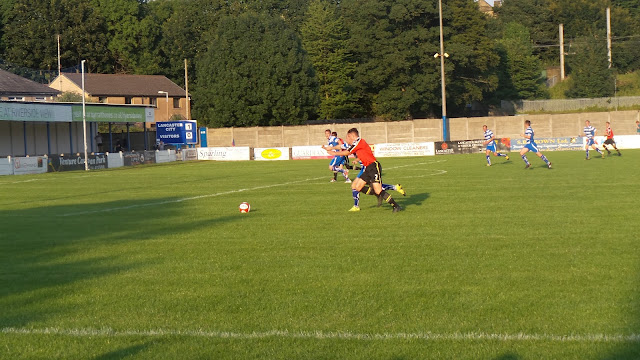 £4 was also the very reasonable entrance fee for the evening as pre season friendlies were being offered at half price entry.  I had a look around the ground, getting some pictures and popping into the bar for a can of Strongbow for £2.50. I also bought a ruler for £1 as it seemed best value and most useful option. The game was decent and Lancaster City were 1-0 up within a couple of minutes as Corolla cut in from the right and fired past the Morecambe keeper with a cross- shot. 14 minutes in and the hosts were 2-0 up as Cummins rifled into the roof of the net after the keeper had spilled the initial effort. A close range finish from Akrigg made it 3-0. Morecambe's youngsters pulled one back just before half time with a header from a corner that the home custodian could not keep out. 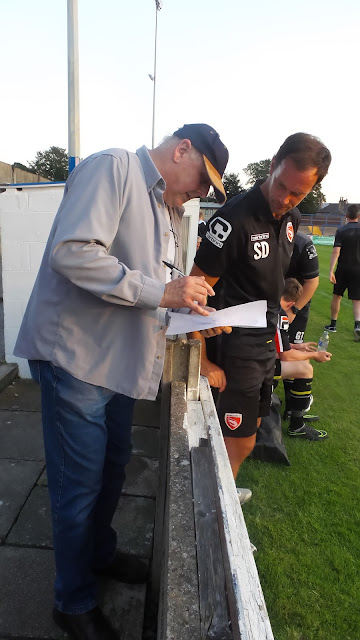 I got some chips at half time which were a lot better than the ones I'd had outside the ground and they did a decent range of other food too. The football continued in the same vein with the home side well on top. They had an effort ruled out for offside just before the hour mark but soon enough they were on the scoresheet again as Mercer's looped header put them 4-1 up. The home fans were loving it and were in full voice singing 'We Hate Morecambe' as it's not that long since the 2 sides were competitive rivals. The Morecambe management were helpful to the tannoy operator, giving him all the team details and substitutions when he came over with his microphone. Waters made it 5-1 with an angled shot before Morecambe reduced the arrears when they put a loose ball in the area away. The best goal of the night came courtesy of Gregory on 84 minutes as his shot flew into the top right-hand corner. There was still time for Lancaster to add a 7th, right on full time and this sparked a mini pitch invasion by the jubilant home fans. 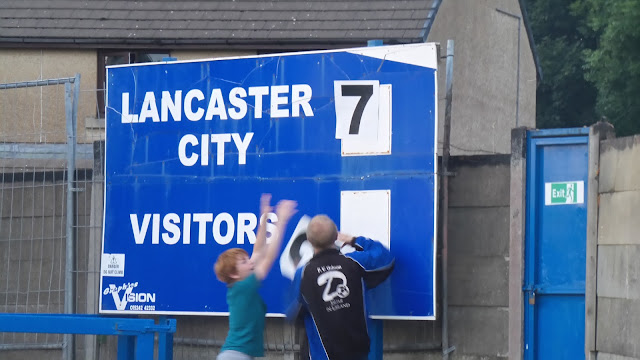 It had been a great evening at a really nice ground and bar a programme everything that you would experience on a normal match day was available. It was a short walk to the station, with my train waiting for me and 10 minutes later I was back in Morecambe. I returned to the Wetherspoons for a couple of pints of my favourite Black Dragon cider before returning to my room. It was good to see that new signing Dayle Southwell had scored his first goal for Wycombe in our 1-1 draw with Brentford and it was nice to see that various mates had been out and about enjoying the warm weather at various football games up and down the country. I dropped off to sleep pretty quickly once I got back and had a decent nights sleep, despite the hot weather. 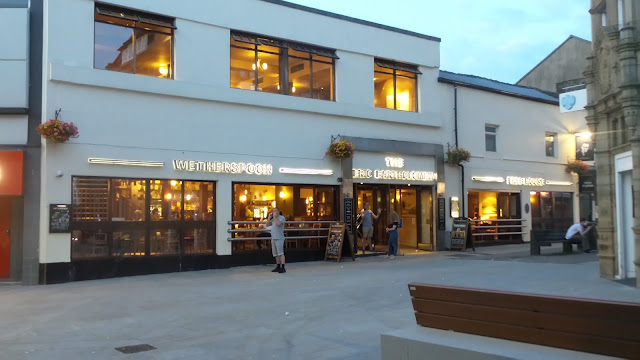 The wonderfully named GIANT AXE is well regarded amongst groundhoppers and rightly so. Situated in the city centre near the train station, it's a good day out especially if you come by public transport with its wide range of pubs and eating establishments. There is a good tea bar at the ground, offering a wide range of food and a couple of bars selling the typical range of drinks you'd expect to find in a clubhouse. Both of these bars also have a good range of merchandise at reasonable prices,

As for the ground itself, I paid a fleeting visit in the mid 90's whilst in the area and it has been modernised since then. There are 2 areas of cover - the 513 seater John Bagguley Stand which was named after the late president and a large covered terrace behind the goal known as The Shed. The other end is a large uncovered terrace whilst the remaining side contains smaller bits of terracing and various other facilities. 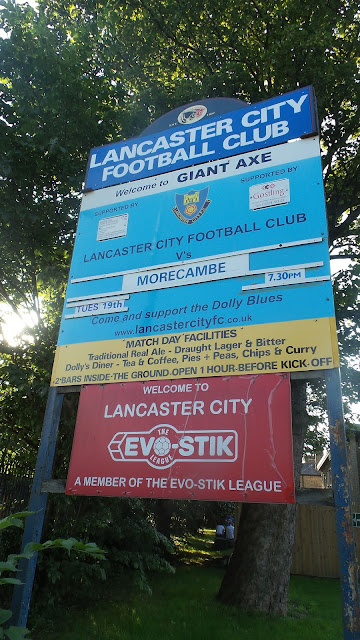 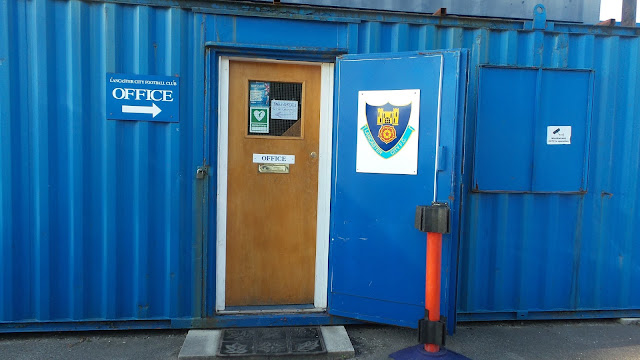 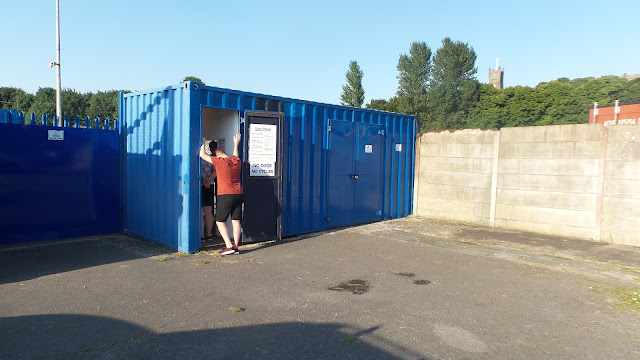 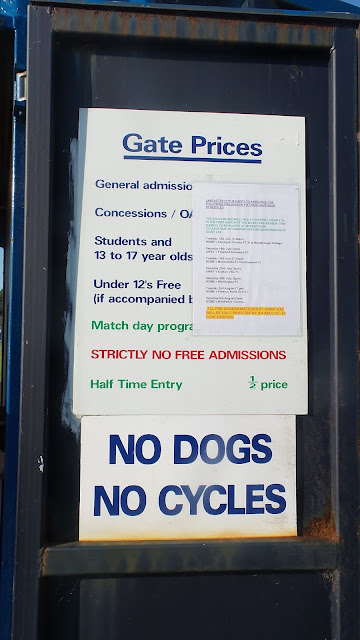 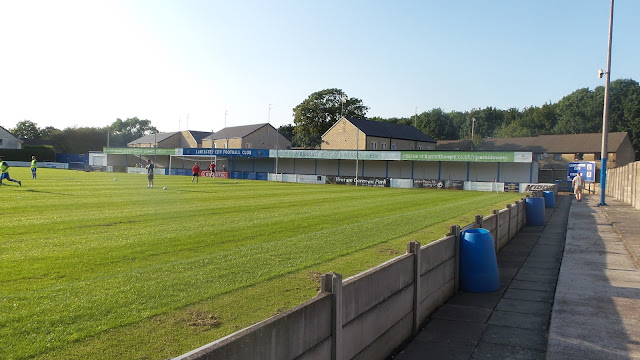 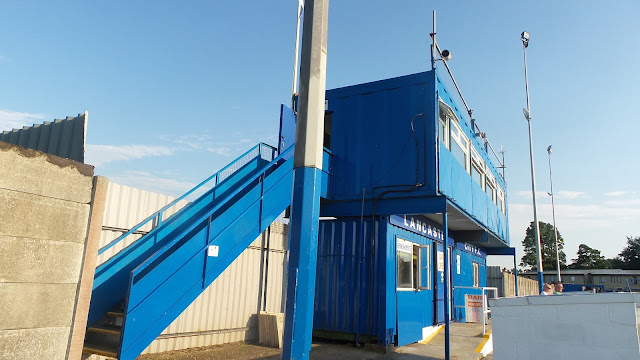 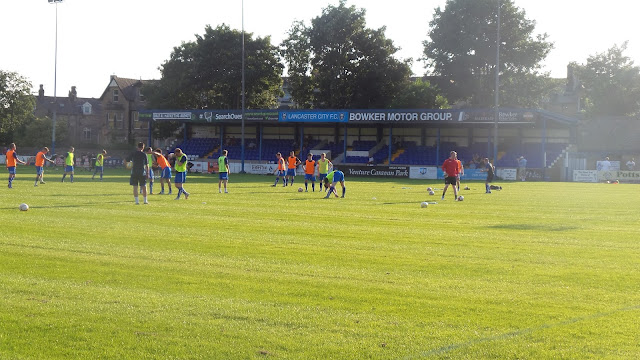 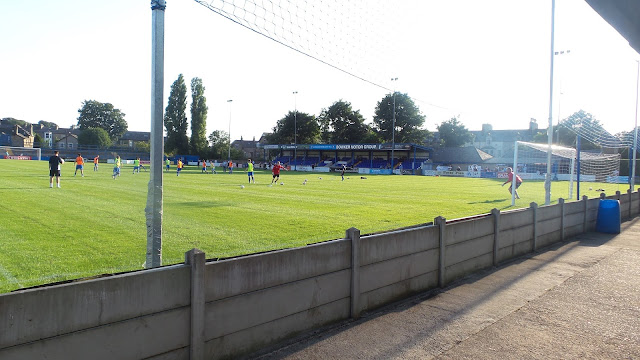 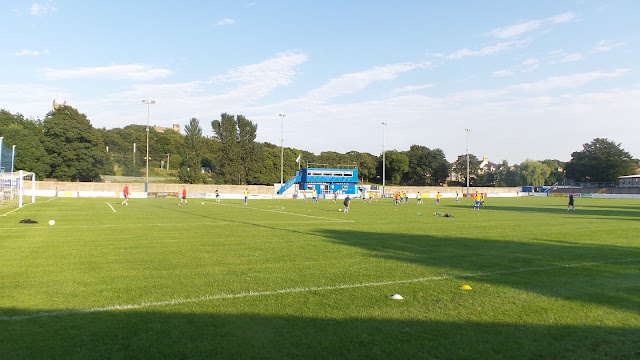 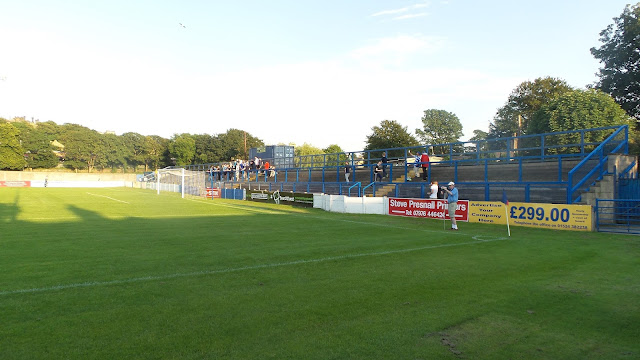 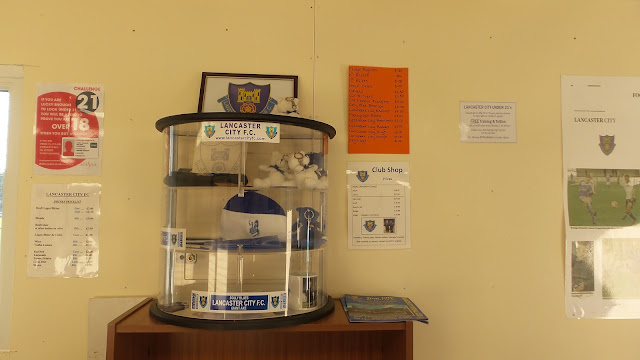 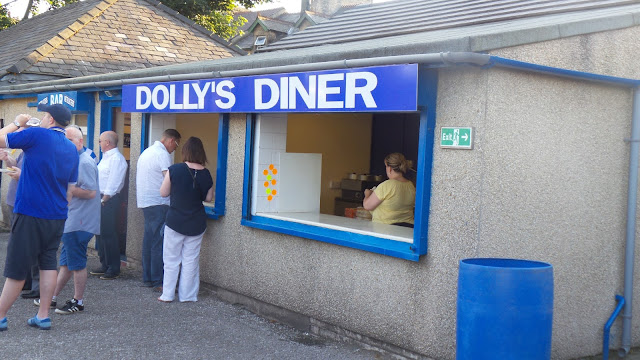 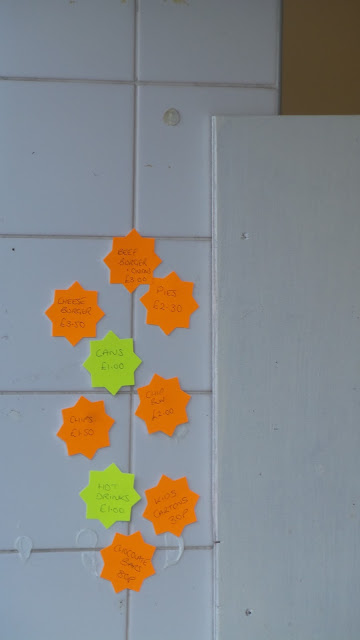 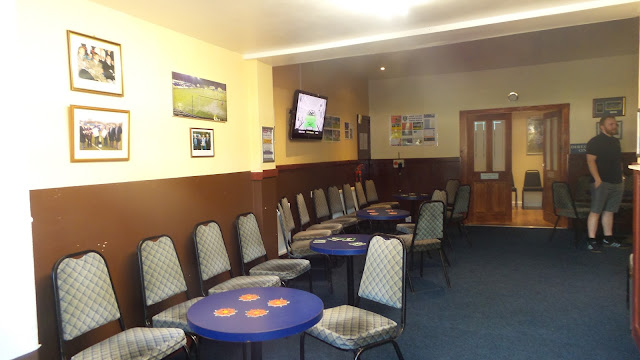