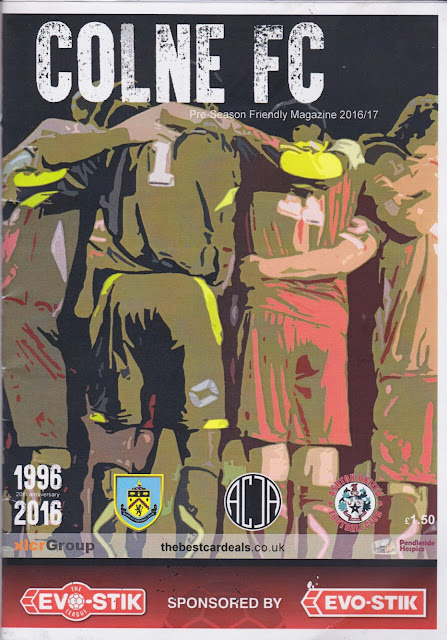 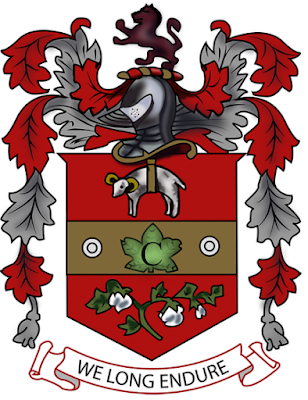 2:  The club started life in the second tier of the North West Counties League. They struggled at first, finishing bottom in their first season. Slowly they improved however, and by 2004 they were champions, despite only finishing 10th the previous season.

3:  From 2004 until last season they were in the top tier of the North West Counties League. They generally fared well, mostly finishing in the top half of the table aside from the 2008/09 season when they finished 18th.

4:  Last season they won the North West Counties Premier, edging out Runcorn Linnets in a battle for the title that went right to the wire. Next season they will take their place in the NPL Division 1 North at step 4 of the non-league pyramid.

6:  The club's best progress in the FA Cup came in the 2004/05 season as they reached the 2nd Qualifying Round. After beating Peterlee Newtown, Chester-Le-Street & Sheffield, they lost 2-1 to Brigg Town.

7:  The Holt House stadium was previously used by Colne & Colne British Legion before the club moved in upon their formation. The record attendance at this ground came in 2004 when 1,742 turned up for the FA Vase semi-final against AFC Sudbury. The clubs biggest 'home' attendance came when Accrington Stanley hosted their North West Counties League game against FC United in front of 2,762 supporters.

9: Plans were in place to move to a new stadium nearer the outskirts of town, however, these appear to have been shelved following the global financial crisis.

Having spent the previous couple of days up in Scotland, I wanted somewhere to break the journey halfway. After weighing up the few options available I plumped for North West Counties League champions Colne who were hosting a young Burnley side in a Friday night friendly. It was a ground I had visited to take photographs of prior to Wycombe's game at Accrington in 2008 and one I was keen to go back to for a game. 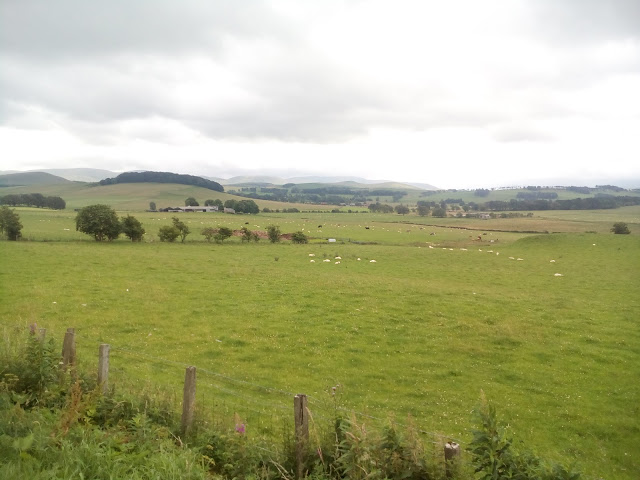 After a reasonable nights sleep I awoke at 7am. After doing a bit of reading in bed I went for a bath and got my things ready to go. I had a look at my route to see if there were any more Scottish grounds I could take a look at along my route. It appeared not, but there were a few interestingly named places such as 'Nine Mile Burn'.  On the way out of Edinburgh I stopped at Morrisons to get some Irn-Bru and a Scotch Pie for my breakfast. I left around 9.15 and barring a stop to get a picture of the scenery it was my last stop until just after 1pm when I stopped at Tesco in Carnforth for my lunch.  It had been very rainy on my way down but fortunately, it was baking hot once I got into England, quelling any fears of a waterlogged pitch in July. I enjoyed my chicken and grapes, before making my way to Colne, arriving at 3pm.

I checked into the Crown Hotel and had 10 minutes rest before making my way into town. I stopped at Colne's Wetherspoons, The William Hartley, but they didn't have the cider that I needed. I then took the gamble of going into Burnley as they have 2 Wetherspoons, one of which I've not visited to see if I could find that elusive pint. I thought £5.60 return was a bit steep, especially after having 2 very good value trips in Scotland. Both of Burnley's outlets failed to come up with the goods, so I just had a retry at the Boot Inn which was my 99th in the chain. I stopped at a takeaway to get Keema Panini and chips, before timing getting to the bus station very well to get my lift back to Colne. 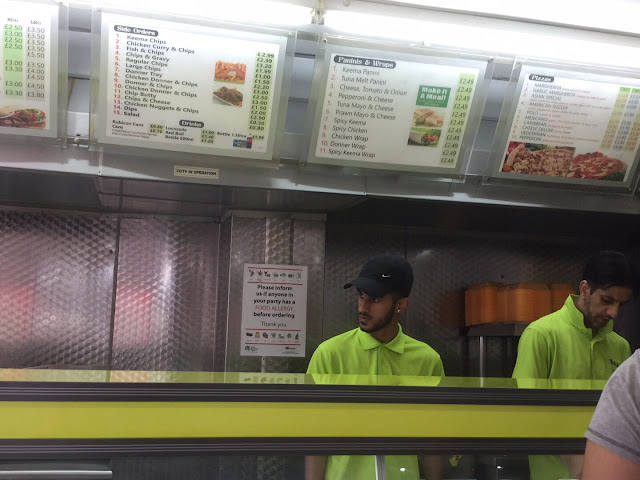 On the bus journey back to Colne, I'd decided that Trafford FC would have the honour of being my Saturday game tomorrow. They were supremely friendly when I stopped to take pictures on the way to another Wycombe game, back in the days when they play in the North West Counties League. More importantly, they had good transport links to Manchester, which had lots of Wetherspoons. If the establishments failed to deliver the cider that I needed then I'd go to the Bierkeller, another long-time target. There were other attractions such as the football museum which may come into play if I had time to spare. As it turned out though, a change of plan later blew all this out of the water, but at the time that was the plan. The bus dropped me right outside my hotel and after I'd sorted my stuff out for the game I made my way to the ground, arriving at 6.55. 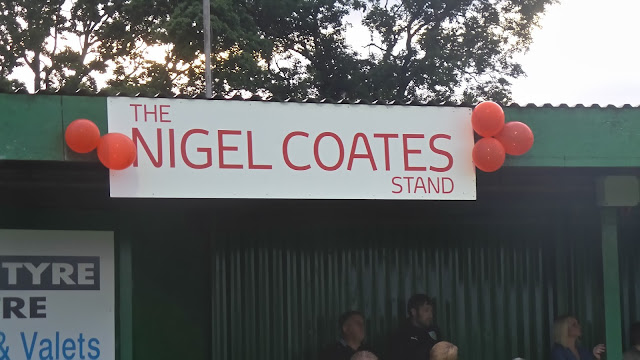 I paid £6 entry plus £1.50 for a smart looking programme, which contained a fair amount to read in it and provided lots of information on tonight's game. After going round and getting some pictures of the ground, I went into the bar and got a can of Magners for £2.20. Later on, I'd also get a Mini Dog & Chips for £1.50 which was great value. Before the game there was a presentation for the late NIgel Coates, who was having a stand named in his honour. He'd been the club's manager from 2003 until 2013 and amongst his honours included a league and cup double as well as a run to the FA Vase Semi-Final. He'd passed away in mid-June, with a quick decision made to name the stand behind the goal after him and a round of applause in the 10th minute of tonight's game to mark his decade in charge. 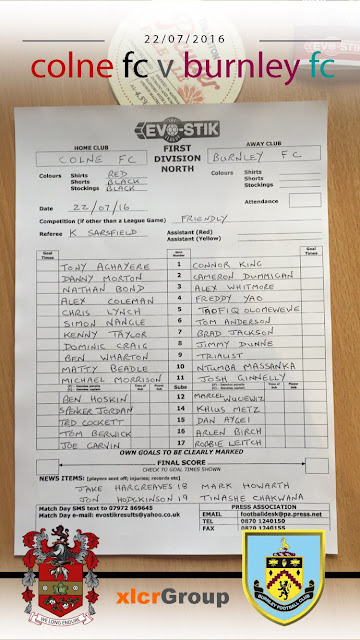 The game was a typical pre season friendly, with fitness being the key rather than making the game a good spectacle to watch. There had been some good skill and passing but little in the way of clear cut chances. Despite Burnley having the better of these, it was still goalless at the break. Four minutes into the second half the young visitors took the lead, thanks to a header from Tom Anderson. Colne tried to get back into the game, going close on a couple of occasions but a flurry of substitutions disrupted what little flow the game had. Khius Metz doubled Burnley's lead on 65 minutes thanks to a low driven shot. An attendance of 526 saw the game peter out on a warm, sticky evening though it had been a nice tribute to their former manager in terms of the match being played in the right spirit. 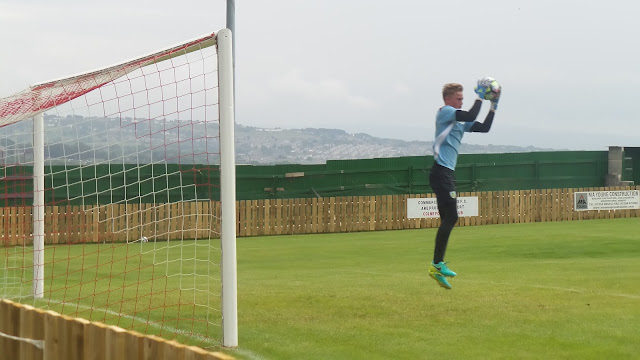 After the game, I walked the 15 minutes back into town. There were 3 micropubs in a row on one street, so I decided to explore them. The first, 'The Tapster's Promise' only had one cide on that I'd not tried. I wasn't sure about the Rhubarb cider from Snailsbank, so I only had a half. As it was it turned out to be very nice, even though I am no fan of rhubarb normally. While I was in there I got talking to some fans who had been to the game and they told me that the seats at the ground had been donated by local club Accrington Stanley, following them taking some out of their terrace. Boyce's Barrel was closed so I went on to the next one, the Cask & Keg. There was nothing new here, but I had a half of Thatchers Gold. Driftwood cider was still not on at Wetherspoons so I had a wander around the town. I had a couple of further stops - having a pint of Strongbow Dark Fruits at the Commercial Hotel and a pint of Samuel Smiths cider at the Red Lion with the latter being just £2 a pint. The Red Lion was a really old fashioned pub, with last orders being called at 10.45 and I too decided to have an early night, getting back to my hotel around 11.15. 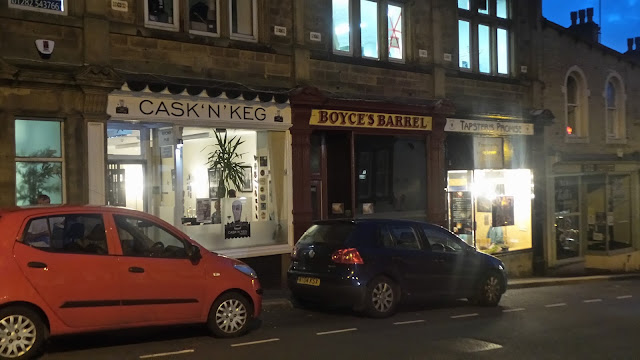 THE GROUND
I originally visited The HOLT HOUSE STADIUM on 2nd February 2008 prior to Wycombe's game at nearby Accrington Stanley. On a snowy day, I was impressed by the ground for the level with it's 2 stands - one seated  and one standing with seating for 300 and cover for a much larger amount. The area looked very pleasant too and once I started groundhopping for real, I was keen to see a game there. 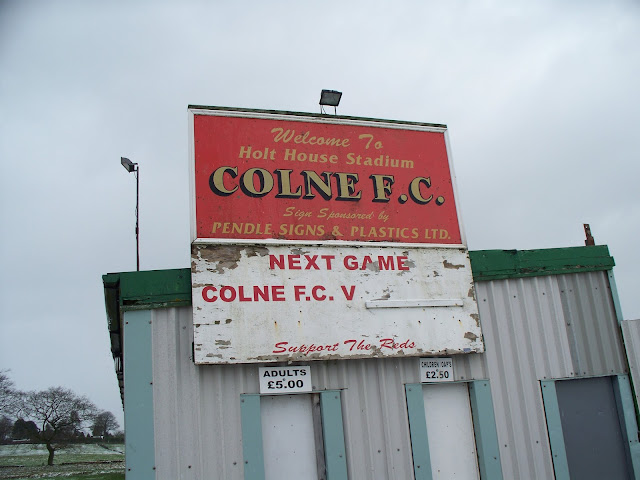 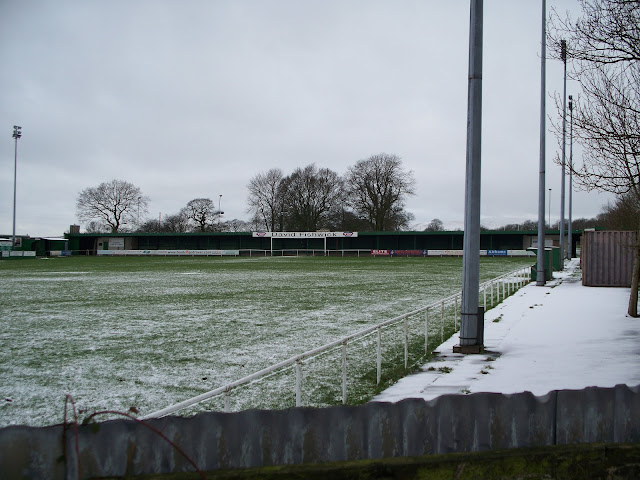 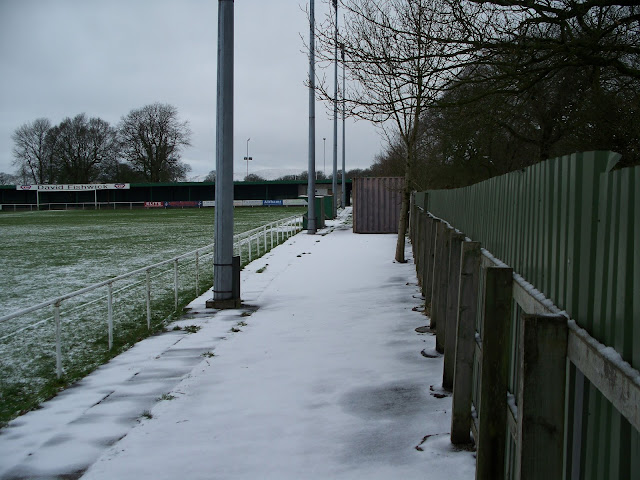 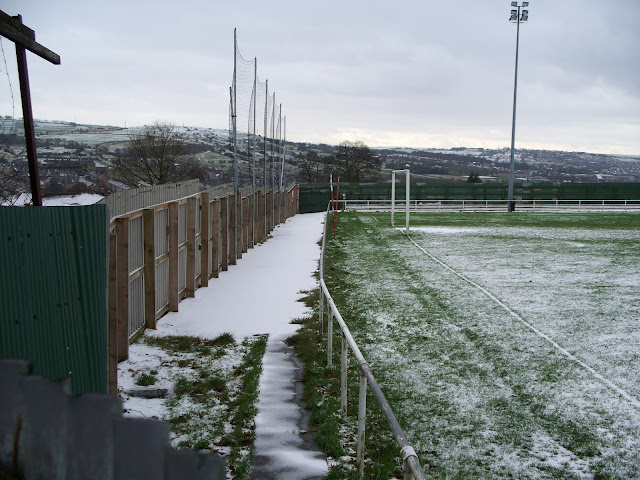 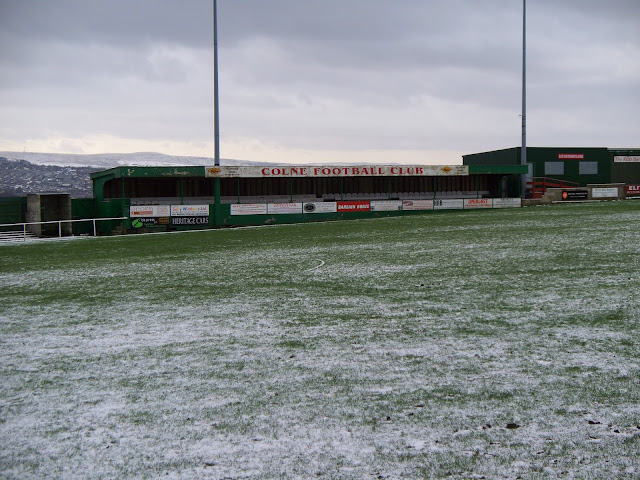 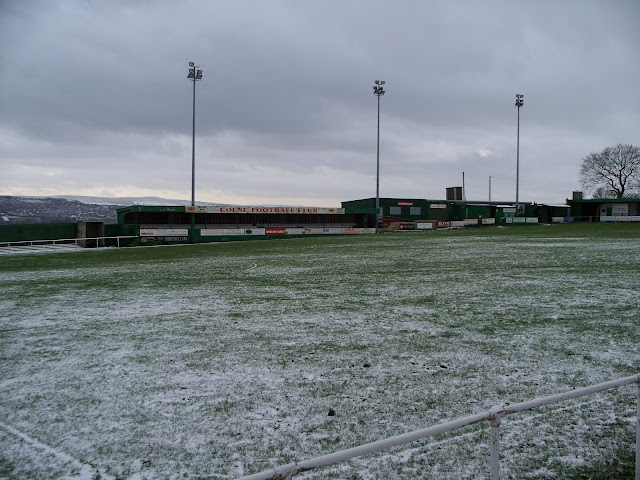 On my second visit, the smart setup was still there with more covered standing being added on the far side, though a lot of that was taken up  as storage by seats donated from Accrington Stanley. The tea bar at the ground was excellent and good value while the clubhouse, mainly restricted to cans, had a good choice and reasonable prices. I didn't see any merchandise for sale however. The town was a 15-minute walk away and offers a decent range of outlets and great views from both the ground and the town. 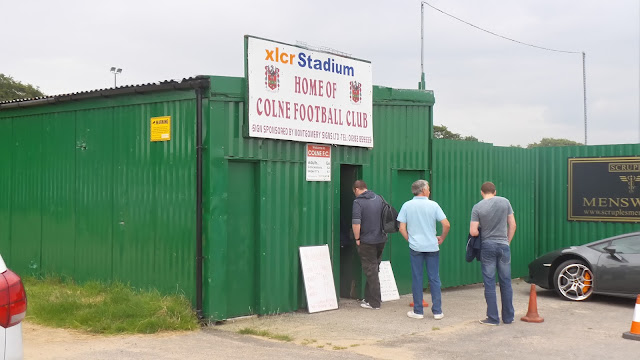 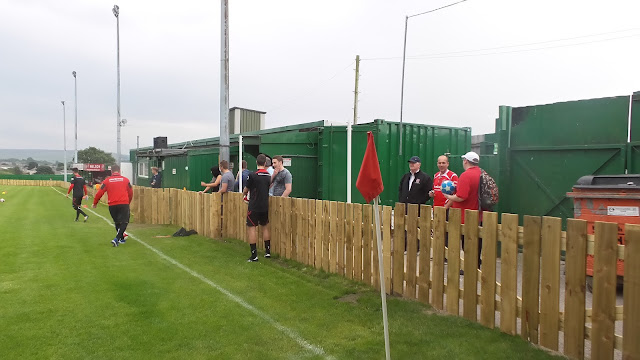 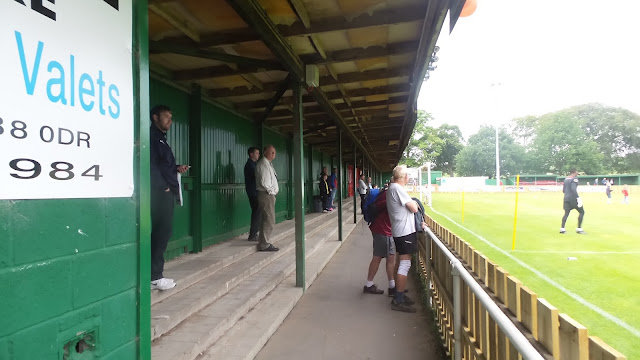 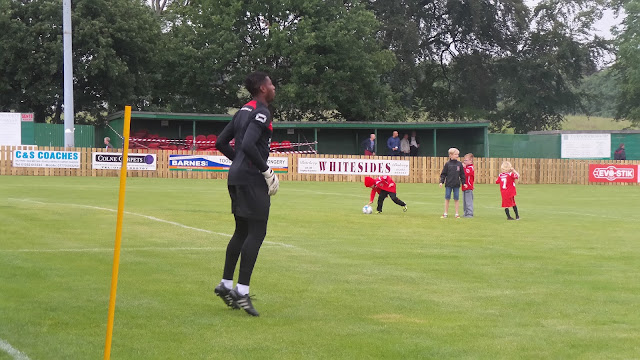 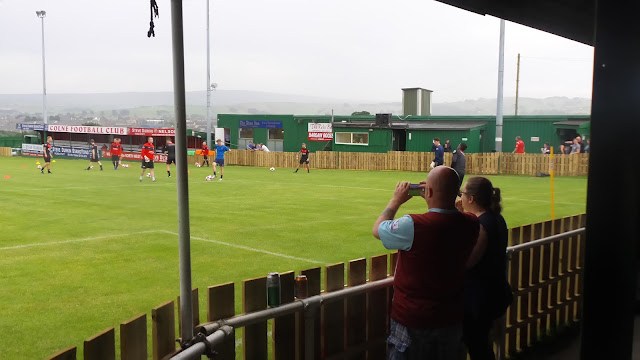 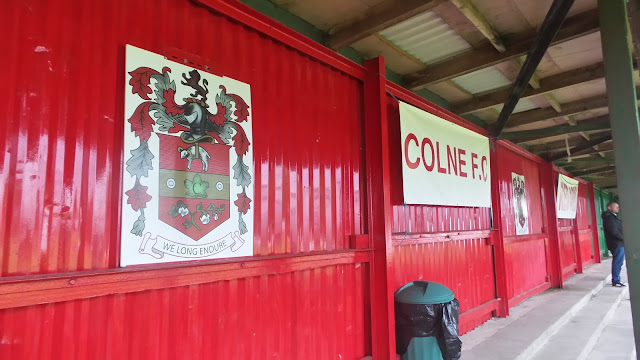 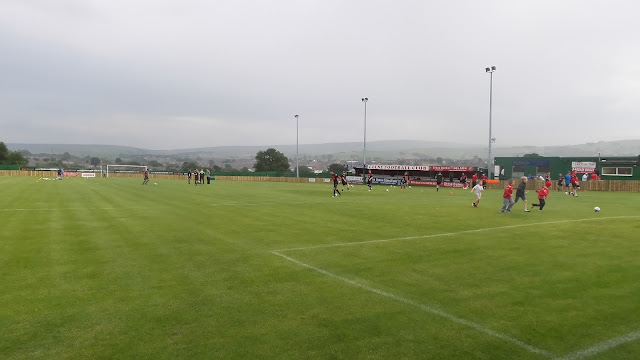 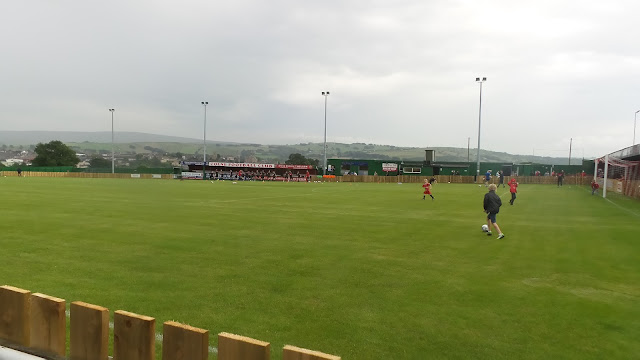 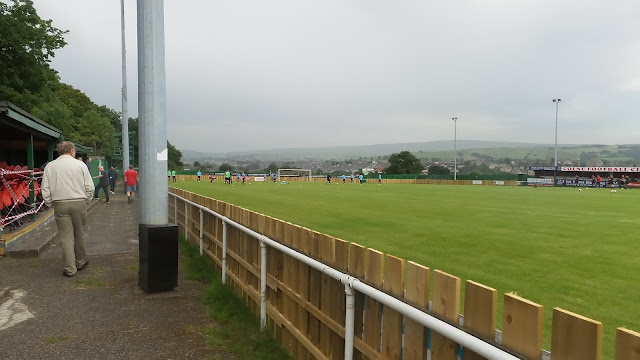 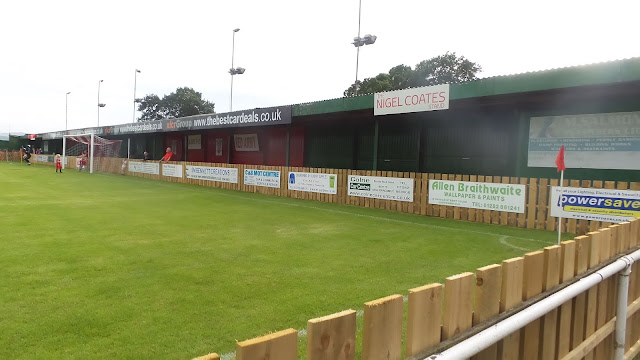 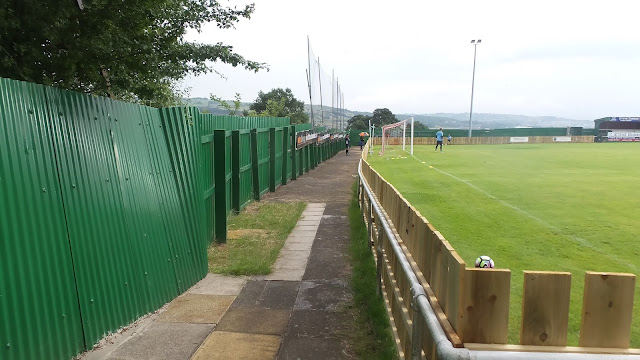 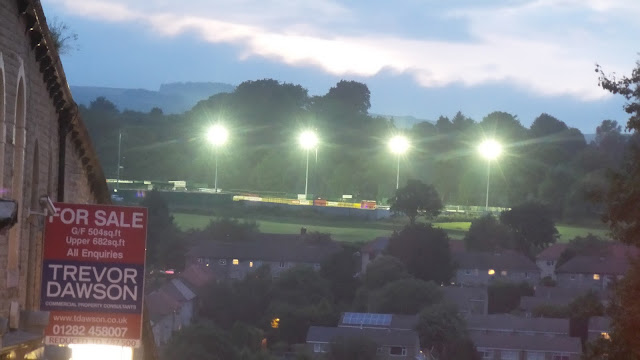 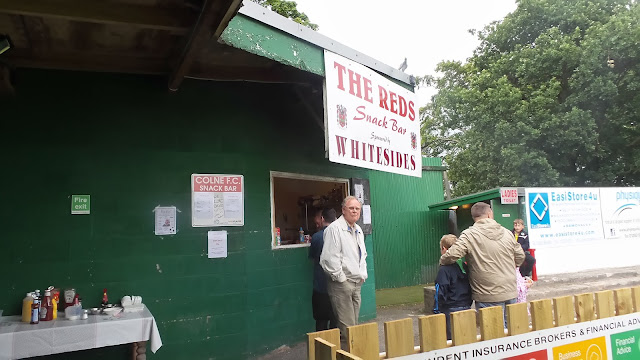 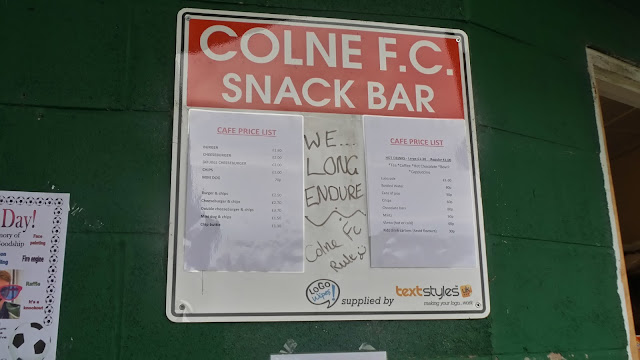 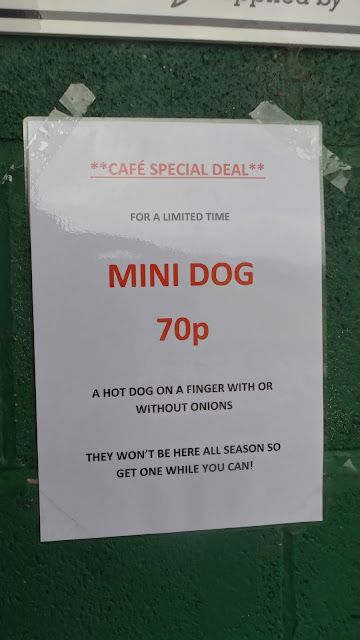 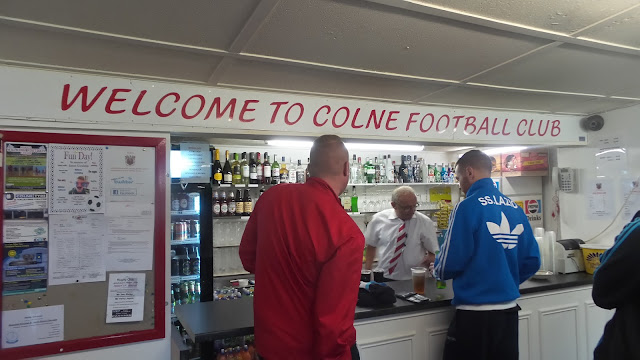