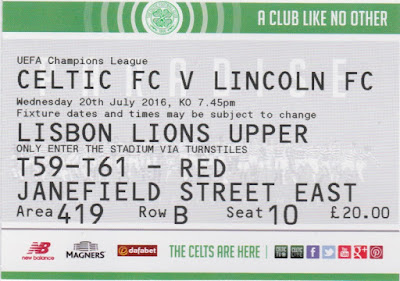 1:  Celtic were founded in 1887 as a purpose of alleviating poverty in the Irish immigrant population. They played their first official match on 27th May 1888, beating future fierce rivals Rangers 5-2 in a Friendly.

2:  The club has won the Scottish League 47 times, including the last 5 due to Rangers financial problems. However, they are still some way behind their rivals who have 54 titles. The city of Glasgow has enjoyed a stranglehold over the Scottish League in recent years with Alex Ferguson's Aberdeen the last to break that mould in 1985.

3:  The Scottish Cup has been won on 36 occasions, the last being in 2013 as they defeated Hibernian 3-0 at Hampden

4:  The Scottish League Cup has been lifted on 15 occasions, the latest occasion being in 2015 as they defeated Dundee United 2-0 in the final.

5:  The famous Lisbon Lions of 1967 saw Celtic lift their only ever European Cup in 1967 as they defeated Inter Milan 2-1 in Portugal. They won every competition they entered that season under the leadership of legendary manager Jock Stein.

6:  Celtic have several connections with my own club Wycombe Wanderers. Most famous of all was manager Martin O'Neill who managed Wycombe from 1990-1995 and Celtic from 2000-2005 with a great deal of success.

7:  The record appearance holder for Celtic is Billy McNeill who played for the club 822 times between 1957 and 1975.

8:  The club's record goalscorer is Jimmy McGrory who scored an incredible 502 goals in 477 appearances between 1922 and 1937. He scored 56 'hat tricks' for Celtic, including one double.

I was on a week off from work and fancied a European double. When the Champions & Europa League fixtures came out in June I looked at various options with the leading 2 candidates being Scotland & Denmark. With the UK's withdrawal from the EU scuppering the pound I decided to leave the Copenhagen double of FC Copenhagen & Brondby for another time. With Hearts confirming their progress in the Europa League it turned out to be a wise choice. I booked my Celtic ticket around 2 weeks before the came for £21.50 and also booked a hotel for £40 in the city centre. Amazingly Celtic lost the first leg of the game in Gibraltar, meaning that this game really had something on it as the Bhoys were trailing 1-0 from the first leg. 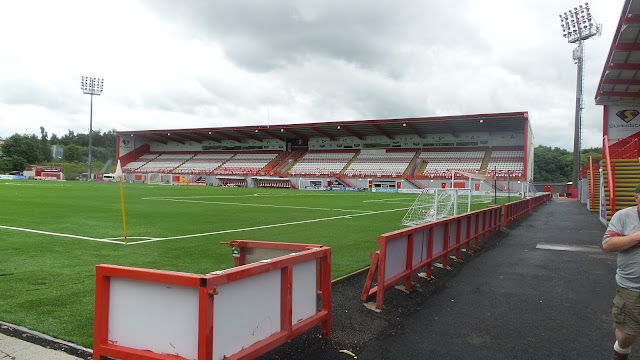 I awoke on the day of the game to find heavy rain and thunderstorms which was a bit of a surprise after the baking hot weather yesterday. I had a wash and went down for a nice cooked breakfast before returning to my room and typing some of my blog and catching up online. I left just after 9am and initially had a long wait getting to the M6 thanks to a seriously flooded road. Thankfully, once on the motorway, things were a lot better and as I drove up into Scotland the weather brightened up too. There was some nice scenery too which lifted my mood. I needed to stock up on some supplies so I stopped at ASDA in Hamilton and bought some Irn Bru, Haggis crisps and a newspaper. While I was off the motorway I stopped to have a look at Hamilton Academical FC. Thanks to a friendly groundsman I got to go in and take pictures and had a brief chat. He also gave me a free hat, so it's definitely one I want to visit for a game in future. 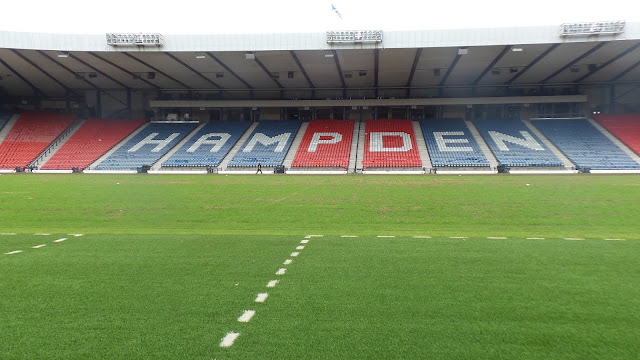 Due to time being tight I decided to go to Hampden Park for my tour before checking at my hotel. I gambled on being able to park at the ground and luckily there were plenty of free spaces with no restrictions. I paid £12 to go on the 2 o'clock tour and also look around the museum. Both were great and were well worth the effort of going. My camera had run out of batteries just after I finished so I charged it in the car and then again when I got to my hotel. The Argyll Guest House was one of the least expensive I could find at £40 a night yet it was really nice. I had the choice of 4 beds and had my own bathroom too, which isn't normally the case with the cheaper places. I went out again around 4.30, walking in the direction of the city centre. I ticked my first Scottish Wetherspoons in The Hengler's Circus where I had a Mounts Bay Scrumpy, my 24th of the festival. I then walked to Charing Cross train station, just around the corner and paid a very reasonable £1.90 for a return ticket to Bellgrove, the station nearest Celtic's ground. 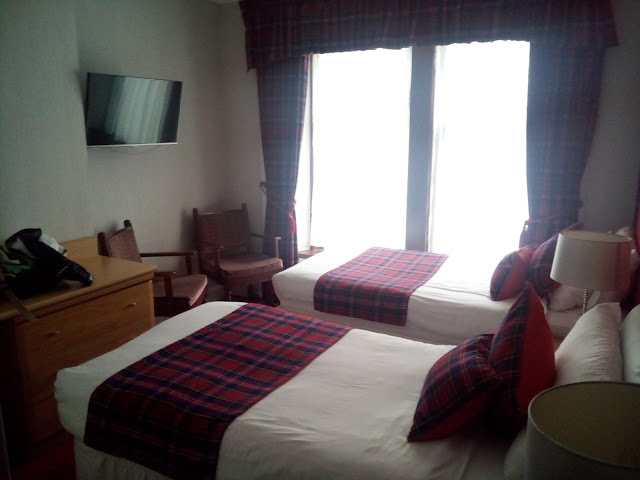 It was around a mile walk to Celtic Park from there. I bought a match scarf for £6 along the way and also picked up a few cans of Itn Bru from Poundland. After going to the ticket office to get the ticket I had left at home, I went in search of dinner. I knew exactly what I wanted and the Haggis & Chips from Kadir's takeaway was spot on and a decent sized portion for £4.20. I got into the ground at 7.15 and got some nice pictures, including going around the other side to get a better picture of the stand to my left. It was a really good atmosphere, especially when they sang 'You'll Never Walk Alone'. The place reminded me of Anfield a lot, what with that song and that something magical about the atmosphere. On the pitch was good too, I was hoping that Lincoln Red Imps would make a game of it. They might have done too, had it not been for 3 quick goals just after the 20 minute mark meaning it was all but over at half time. The Gibraltans led 1-0 from the first leg and did themselves credit on the night, even having a few spells of pressure which might have led to a goal had they had that finishing touch up front. 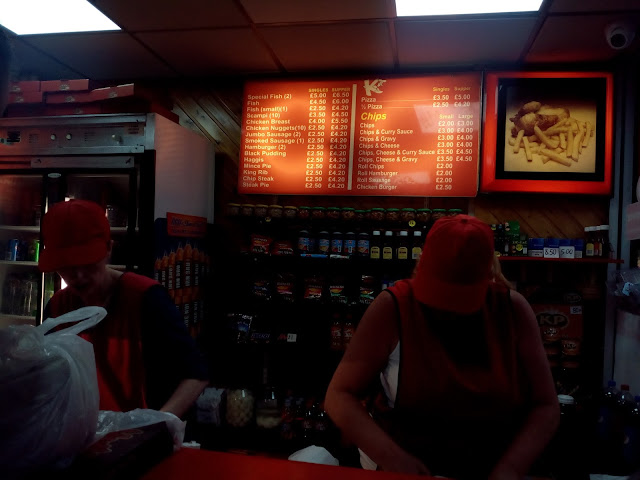 After the game I decided to walk into the city centre and go to some of the Wetherspoons. The Counting House was the main one and there I had a pint of Rosie's Pig Handbrake. I'd hoped to get Garden City Vintage too, but was unable due to them cleaning the lines. This may well prove to be my nemesis in completion the festival as twice it has been advertised but unavailable. The next Wetherspoons, the Camperdown place was skipped as they didn't have any of the ciders that I needed. The Society Room did though, where I had a pint of Percy's Pride. It was just after 11.20 now, so I decided to walk just over a mile back to my room. I checked in at The Hengler's Circus again to see if they'd got any new ones on and it turned out to be a wise choice with Hallet's Draught tried. It had been a very successful day on that score, with another 4 down and just 4 to go, giving me a good chance if completing every cider in the festival for the first time. I'd always fallen one or two short previously, hopefully that won't be the case this time. From there it was a short walk back to the hotel. I watched Coronation Street before falling asleep around half midnight. 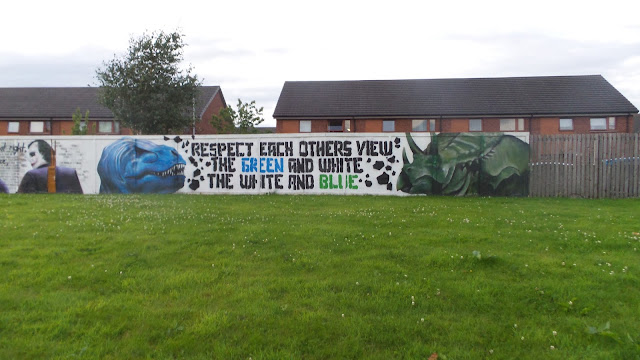 CELTIC PARK or PARKHEAD as it is sometimes known is one of the best grounds in the UK. All seater until recently with a capacity of over 60,000 it has recently had a small section converted to 'safe standing' to add to the atmosphere and increase the atmosphere even further. It's situated in an area with a few pubs but mainly a large amount of takeaways covering many cuisines. Around 3 miles from the city centre, it's also quite a hike to the nearest train station, Bellgrove, which is 25 minutes walk away. 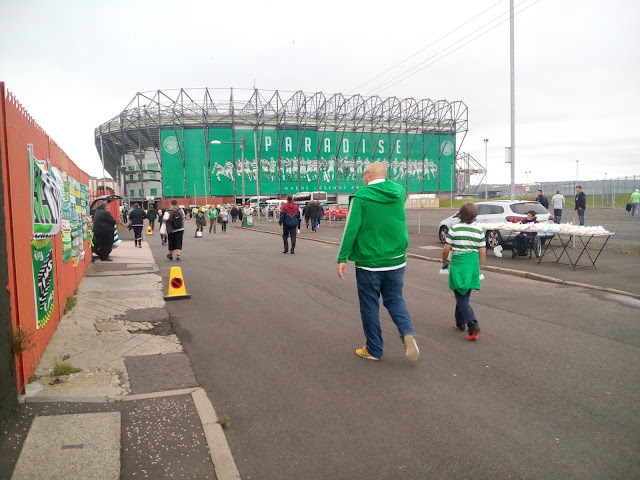 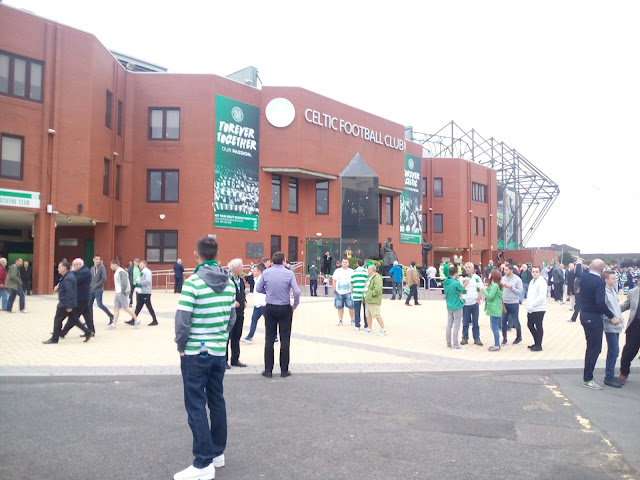 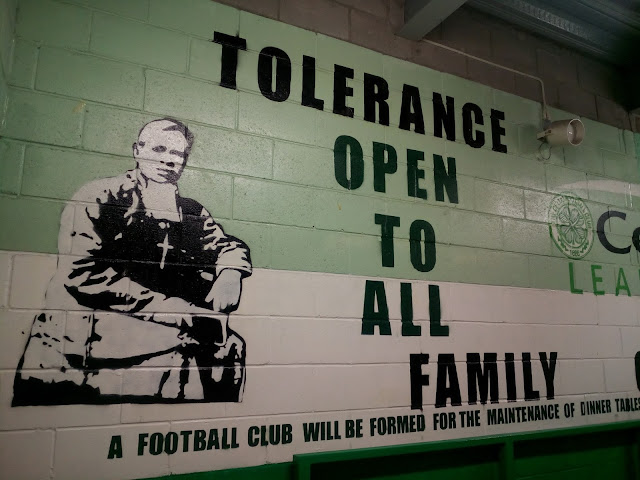 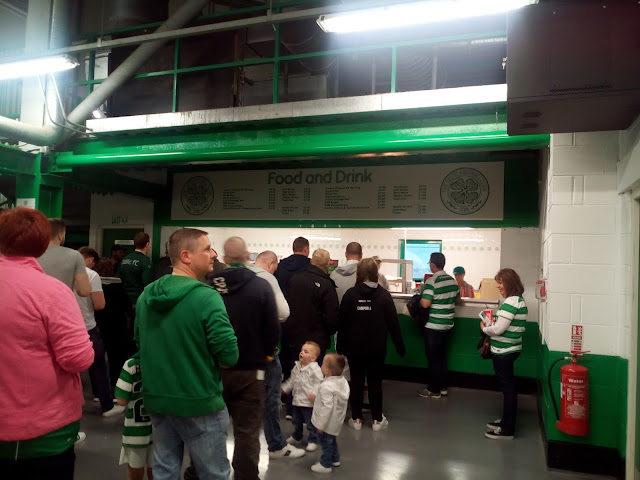 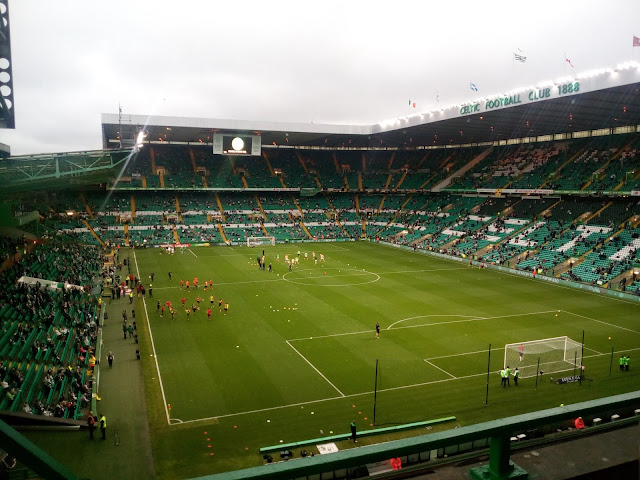 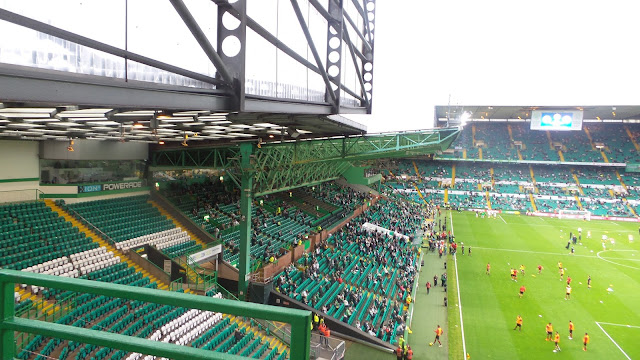 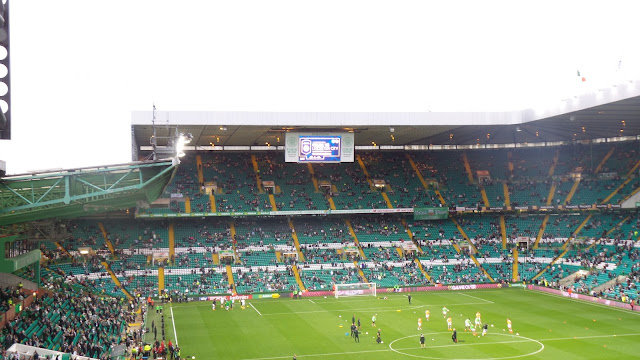 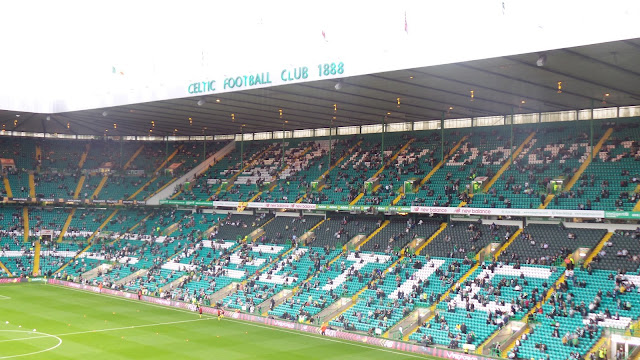 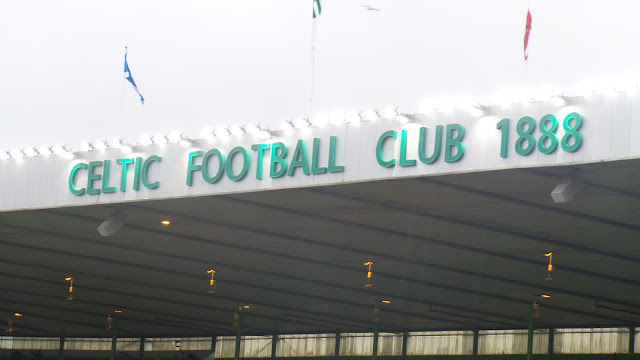 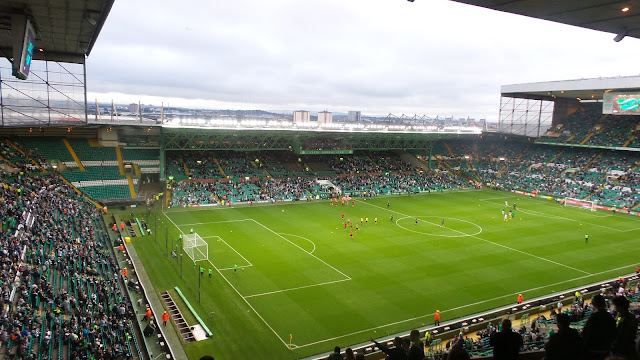 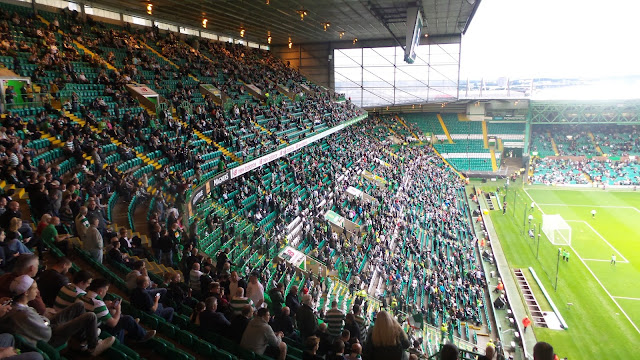 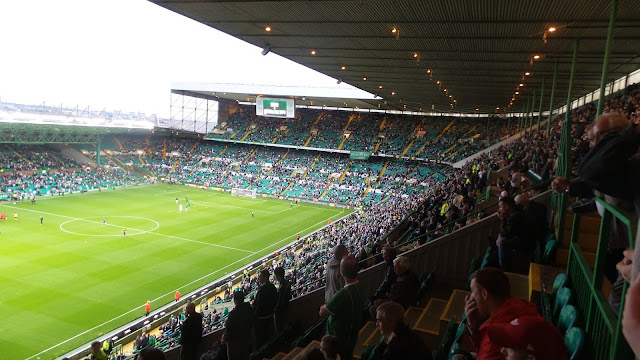 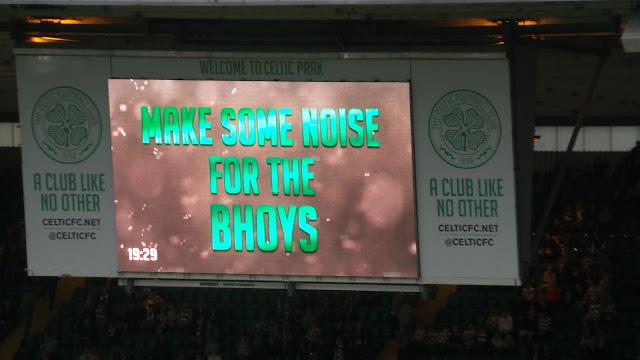 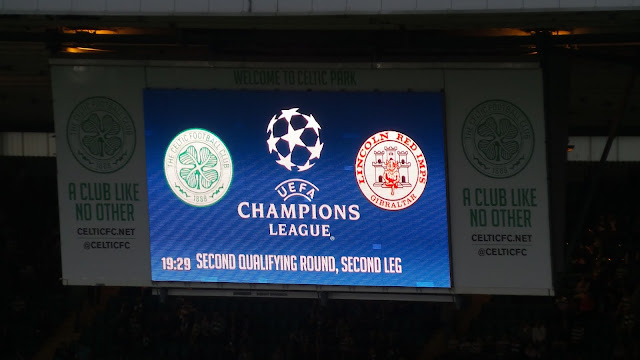