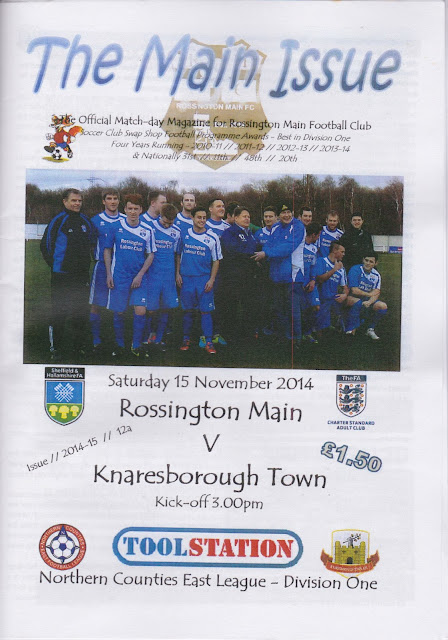 ROSSINGTON MAIN FC was formed in 1919. They played in local leagues before joining the Central Midlands League in 1983. After great success in the first few years - they won promotion to the Premier Division and they were right up amongst the frontrunners for the next couple of seasons, they started to find life a little tougher and after a series of bottom half finishes, they joined the NCEL at Division 1 level in 1991. Since then, they have remained in the league, with a best-ever finish of 7th achieved on 4 occasions, most recently in 2011. Prior to the game they were struggling a bit and sitting in 18th place.

They reached the 4th Qualifying Round of the FA Cup back in the 1920's before losing to Lincoln City. In modern times their best run came in 2002 where they beat Atherton Laburnum Rovers and Bishop Auckland before losing out to Radcliffe Borough in the 2nd Qualifying Round. In the FA Vase, they got to the 2nd Round in 1989 before going out to Harrogate Railway. As for other cups, their most recent success came in the CML Floodlit cup, back in 1984. 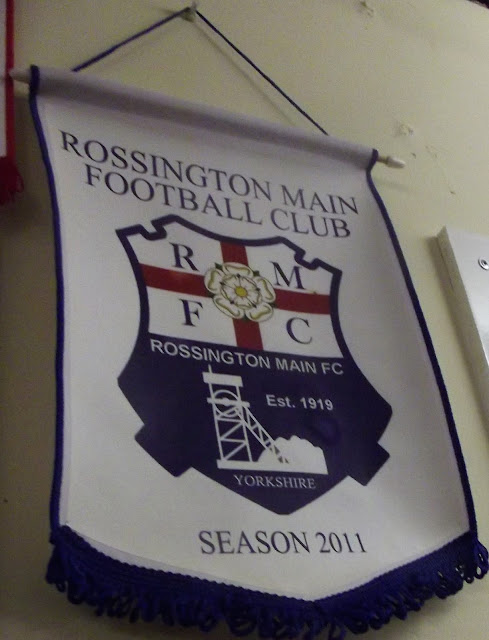 MY STATS FOR THE SEASON SO FAR

As it was the halfway point in my intended season of 150 games so far, I thought I'd take a look at how I had done with my targets. I'd set myself a challenge of completing 150 games, at a budget of £20 a time. This would be tough, as it included ticket, programme travel and food & drink (excluding supermarket purchases, and new ciders that I would budget for elsewhere) It was helped by each Wycombe home game costing £12, and also doing some cheap local games. The cheapest so far had been £1.50 for Wycombe Wanderers v Chelsea where I had got my ticket as a birthday present. The most expensive was Harrogate Town v Grimsby Town when I met some good mates, so it was still money well spent, even at £53. Ironically they came within 24 hours of each other, on my week off in July. 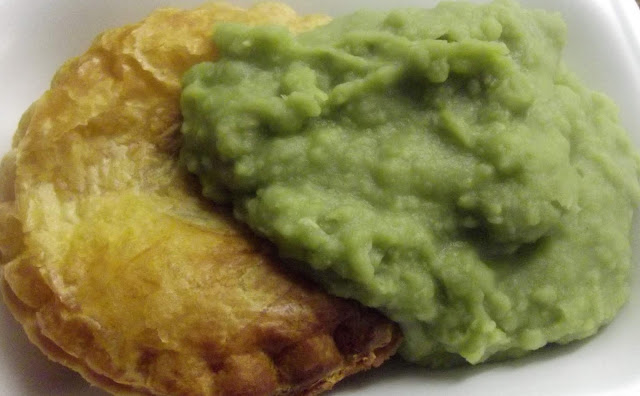 This would be my 76th game of the season. I was hoping that it would be at TNS v Aberystwyth Town on Friday night, but Anwar had texted to say that he wanted to save his money. Although my week before had been all geared to go to it, come what may, I had a look at the sums again on Thursday. After seeing no potential cider pubs and no meets possible, I decided against it. I was hoping to go and see my mate Marc, a Kidderminster fan who lived near Telford, but he was away for the evening, so I decided against it, as it would cost me nearly £50. Instead, it would be up North somewhere, with me dropping Anwar up at Doncaster on Saturday, I would be heading to one of 12 games that I had selected as possibles, most likely Pontefract Colleries if the weather behaved, as it had a decent pub nearby, and was fairly near. If the worst came to the worst, I'd head to Stockport Sports which had a 3G surface and would save the day if it was very wet. Some frustrating news came through as I was typing this blog. It turned out that the Robin Hood pub that I was planning to go to in Pontefract was closed due to flood damage. Luckily there was a Wetherspoons in the town, so even if there were not any new ciders, it would at least be cheap for a couple of pints and some food. The next morning. the Friday, the trip was almost off altogether. Doncaster had imposed a daft rule, where only people with a Doncaster postcode could purchase tickets, in an attempt to deny Sheffield United fans entry. Because we all know that people are incapable of sitting next to a fan of an opposing team without murdering them, at least that's what the authorities think. Sadly that affected groundhoppers too, so it looked like my day out was blown, and all the work on this blog had gone to pot. For a few hours, while I was busy at work, I thought I'd be heading off elsewhere, the new favourite being Lowestoft. But then I remembered, I had previous purchase history, having gone there for a groundhop myself in 2012. That turned me from potential hooligan to nice peaceful football fan in the eyes of the club, and so I booked Anwar a ticket on my credit card, selected collection from the office, and printed the order form out for him to claim his ticket. 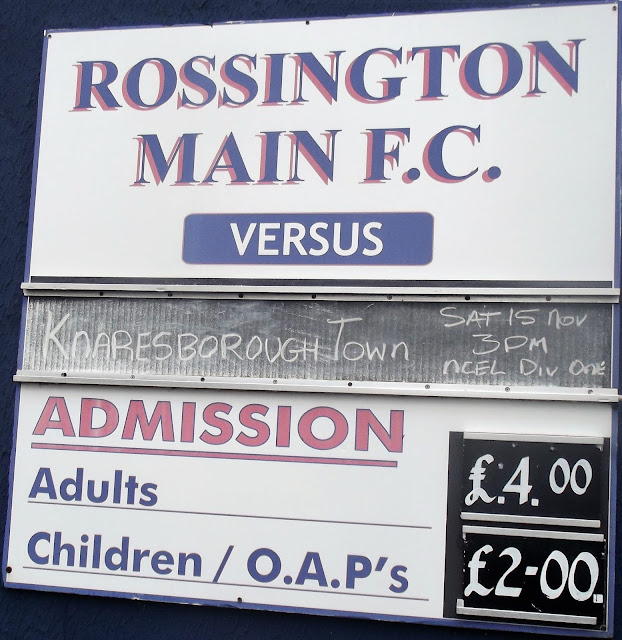 On the day of the game, I hadn't had the greatest nights sleep before, but I felt pretty fresh. Several of my games were due to have pitch inspections - Liversedge at 9.30 and my main choice of Pontefract at an unspecified time. I had put in Stockport Sports as my third backup, but I really wanted to save that as it was one of the few 3G pitches in the country. I browsed the internet, listened to talkSPORT and had some breakfast and a bath before leaving at 8.30. I got to Anwar's at 9, and as we were going up, I noticed we would get to Doncaster at 11.40. So I decided to have a change of plan, choosing to park up in Doncaster and go into town there, what with lots of games being in doubt. Doncaster also had a lot more to it than Pontefract, and it would also give me a chance to alter my plans, should the games fall victim to the weather. There were no major traffic jams, though there were 35 miles of roadworks with a pathetic 50MPH speed limit which was annoying and added to our journey time. Even so, we got to Doncaster at 11.40 as scheduled and parked up in a car park which charged a very reasonable £1.40 for 4 hours parking, which was plenty. We made our way to Wetherspoons for dinner, but it was rammed with Sheffield United fans who were in town for the game, making it practically impossible to get a table. In fact, the whole town was full of them, and we barely saw a Doncaster fan there. Instead, I looked in my Good Beer Guide app for another pub and found one that was supposed to do some interesting ciders and good food. It was around a 10-minute walk away and was called the Salutation. 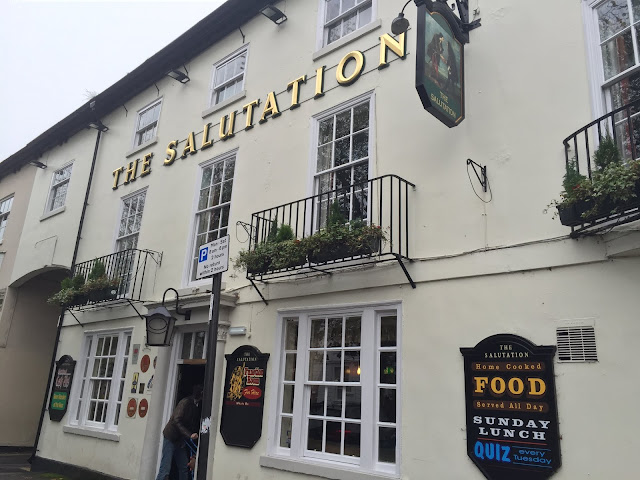 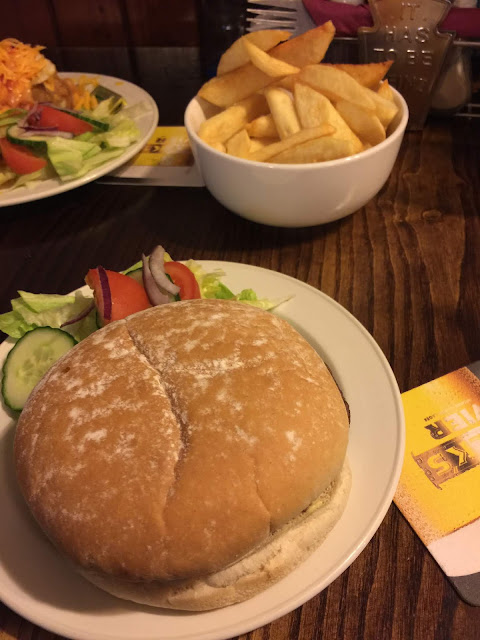 We got there at 12.10, and although the food looked a bit costlier than Wetherspoons, and the cider range not too great, we decided to stick with it, seen as it was nice and quiet. I opted for burger, chips and a pint of Symonds and it was absolutely delicious, being a homemade burger with hand cut chips, and I wasn't too bothered about adding a fair bit to my football costs. After our meal, we had a look round town, and I bought some cakes from Pound Bakery before going back to the car. I dropped Anwar at Doncaster at 1.50, before getting to Rossington at 2.15. I'd have got there a lot earlier had it not been for a poxy level crossing that stayed down for about 5 minutes before a train finally went through it and left a lot of people waiting. I paid £4 to get in and £1.50 for a decent programme, that I had seen had won awards for being the best in the division in recent times. First stop was the bar, where I got some Strongbow and settled down at a table to check my Facebook and read some of the programme. I'd been impressed with the club so far, and ended up having a good day. This was totally at odds with what I had read in the Scarborough Athletic fanzine 'Abandon Chip' fanzine, which had given the place a right going over when the 2 clubs shared a division. Everyone was really friendly and welcoming and later on I had a great minced beef pie with Mushy Peas which was both tasty and generous in size. 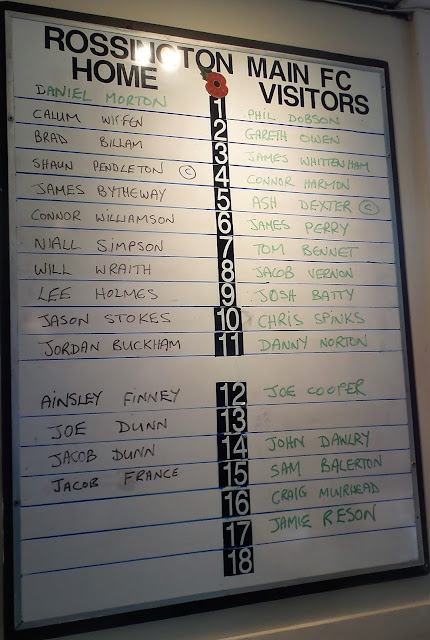 Knaresborough dominated the first half, with Rossington perhaps lacking confidence following their 8-1 defeat at Hemsworth Miners Welfare last week. The visitors went ahead on 18 minutes through Colin Heath as he found the keeper out of position and scored from outside the area. Lee Holmes equalised just before halftime, but bang on the halftime whistle Knaresborough went back ahead through Mitchell Hamilton, and despite Rossington upping their game after the break, that was how it stayed. The people at the club and the ground deserved better, but to be honest, on the field, the result was justified. 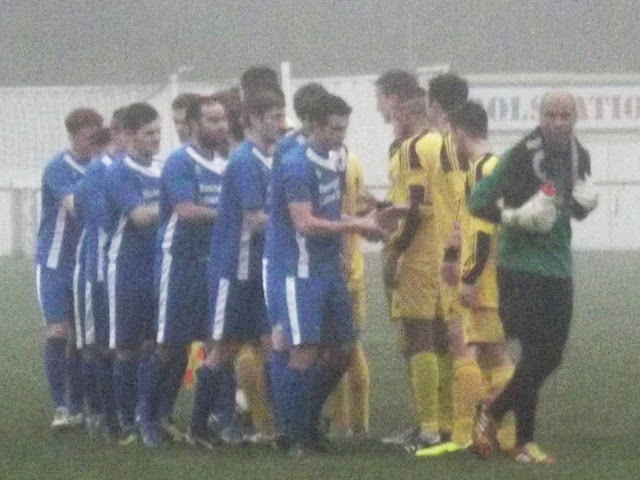 I left Rossington just before 5, after quite a lot of injury time at the end of the game. I got back to Doncaster at 5.20, waiting for 10 minutes in traffic to park up and go into the club shop and meet Anwar. Sadly some old boiler was holding the door shut and they couldn't be bothered to serve any latecomers, which meant they missed out on a sale from me. I really wanted to get something as one of my best mates, Ben, was a keen Donny fan and it would be nice to have something from them on my wall. Instead we made our way to B&M Bargains where I got a drink for the journey home and a couple of ciders for when I got back. It was 6PM by the time we left Doncaster and by the time we had stopped for the toilet halfway home, and gone through the dreaded roadworks, it was 8.50 before I dropped Anwar off in Aylesbury. Getting home was a bit slower than usual too, due to heavy fog and I eventually got in at 9.20. I caught up with Facebook, typed some of my blog and had a drink before getting into bed around 11. 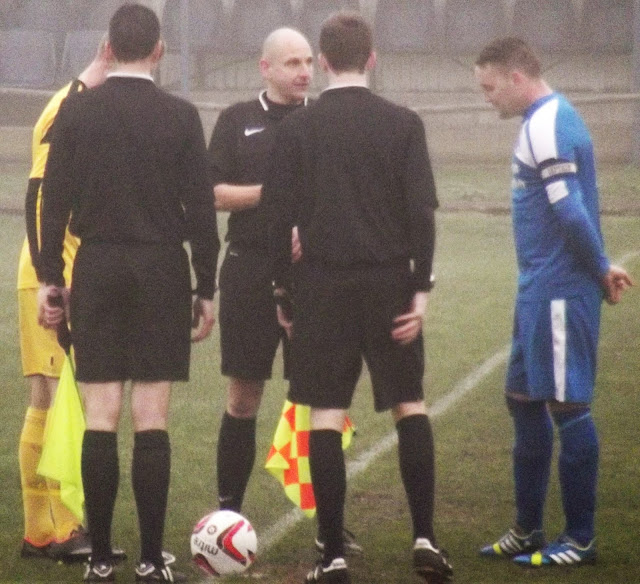 OXFORD STREET is a great ground for step 6, and would be fine for step 4 or maybe even step 3 level football at a push, with a few small improvements. On the side where you come in, there is a seated stand for 100, plus covered standing for around 250, as well as all the other club facilities. On the other side is a newer looking stand, holding another 150, whilst the rest of the ground is open.

The bar at the ground is good value, though on the cider front they only do cans - either Strongbow or Kopparberg are £2 each or 3 for £5, which although good value and super cold, are a bit cheaper in the shops if you only wish to drink on the terrace. One thing that was well worth the money was the pie and peas. I opted for the MInced Beef one, which was piping hot, delicious and a good sized portion for just £2. As for merchandise, all I saw were pin badges, which is pretty much the norm for this level. 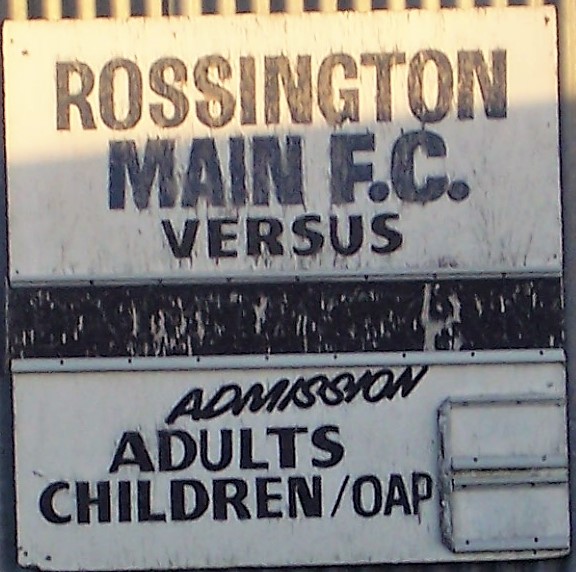 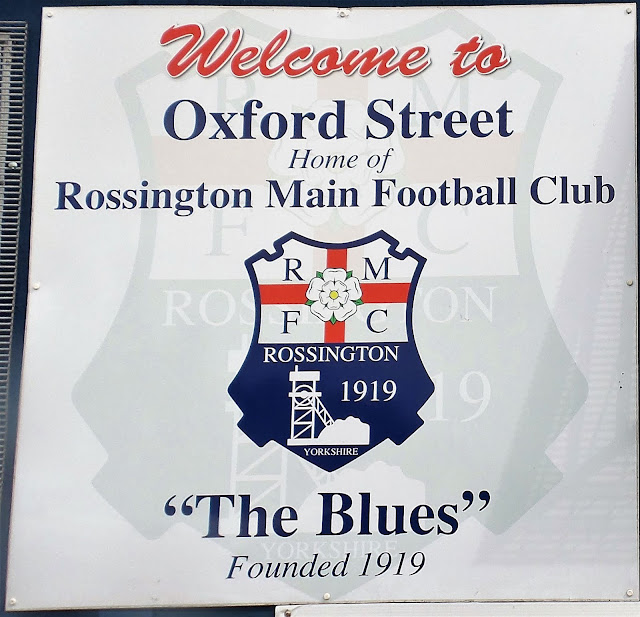 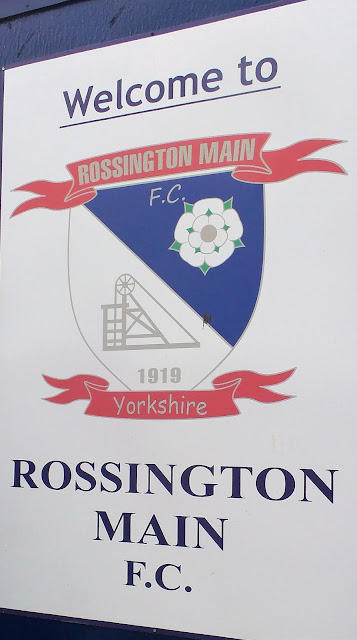 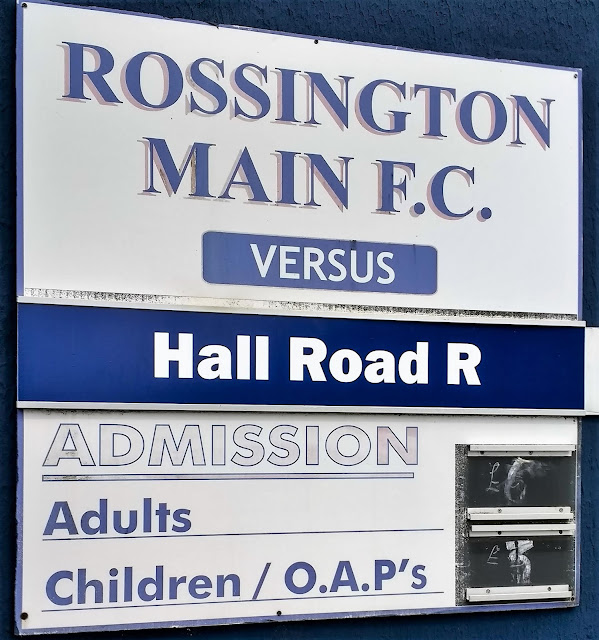 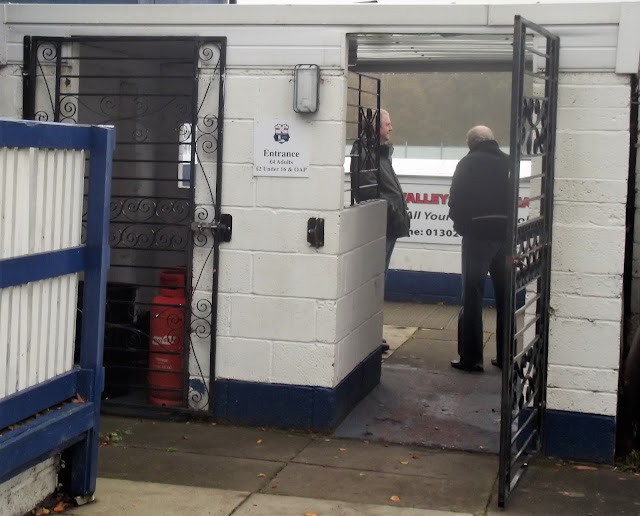 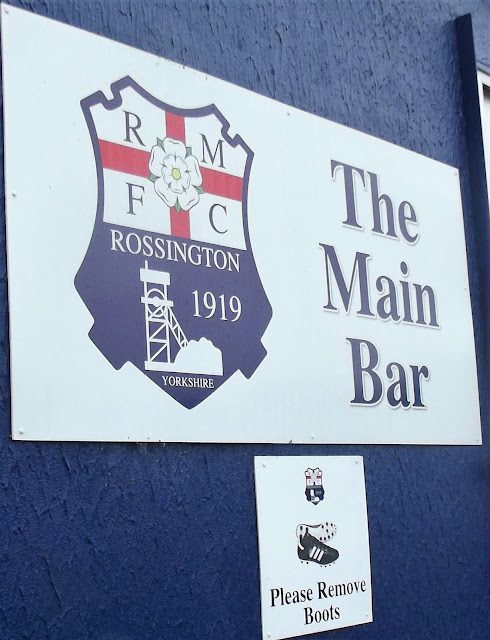 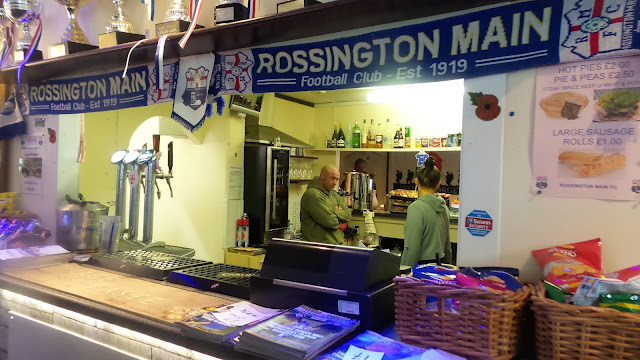 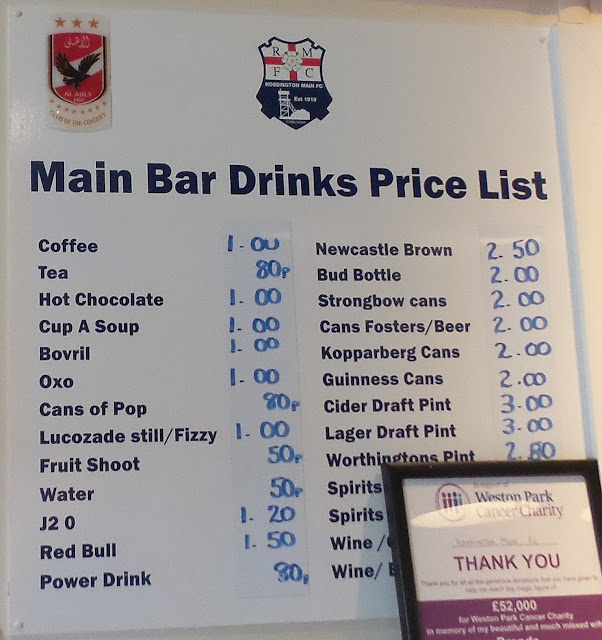 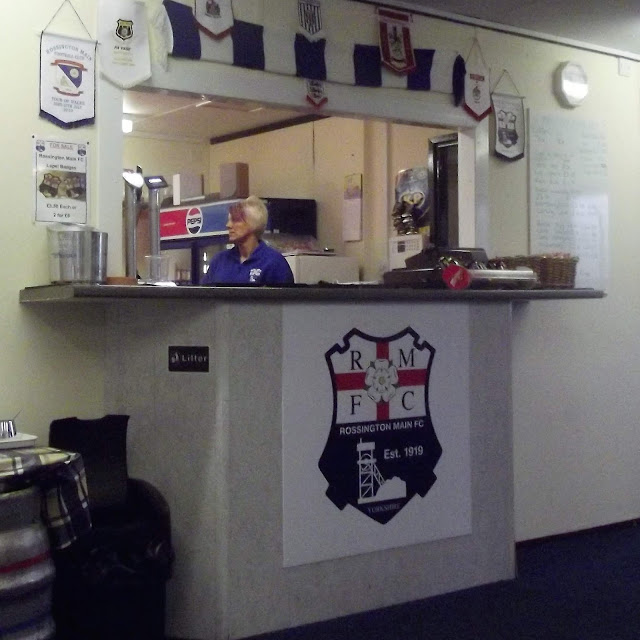 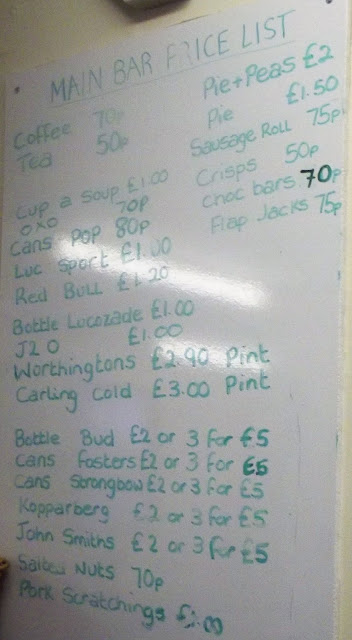 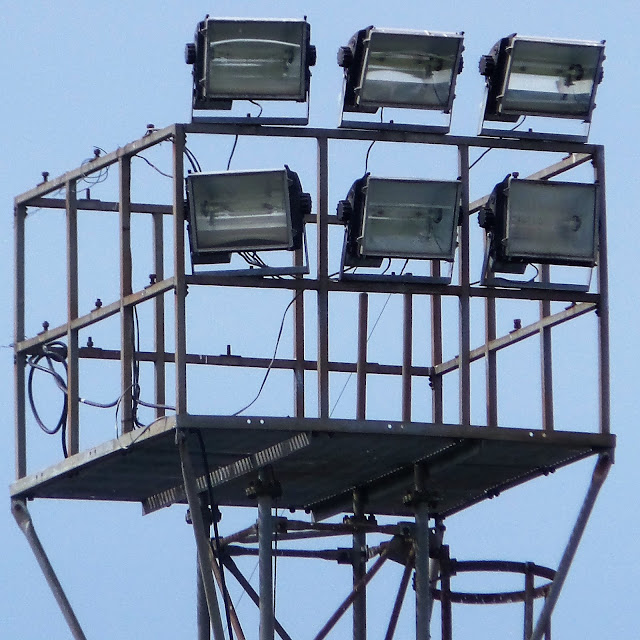 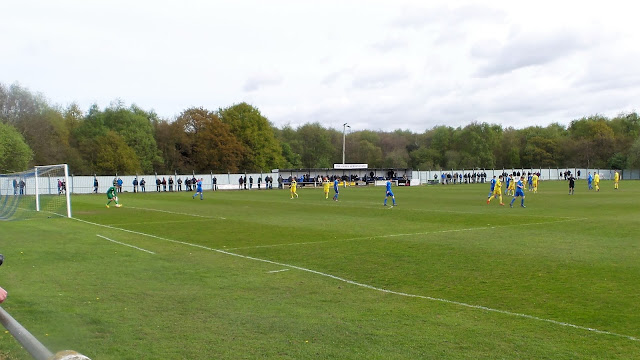 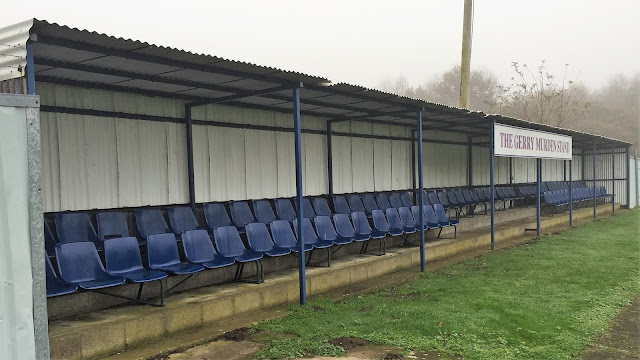 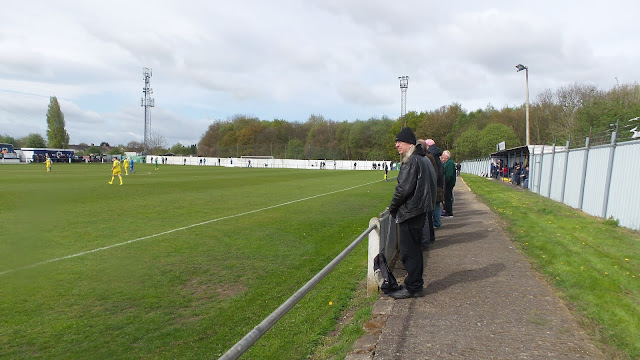 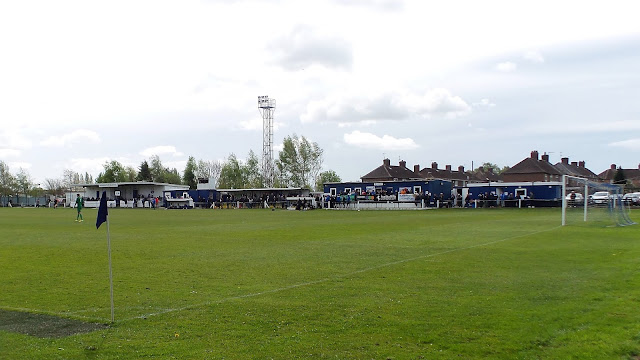 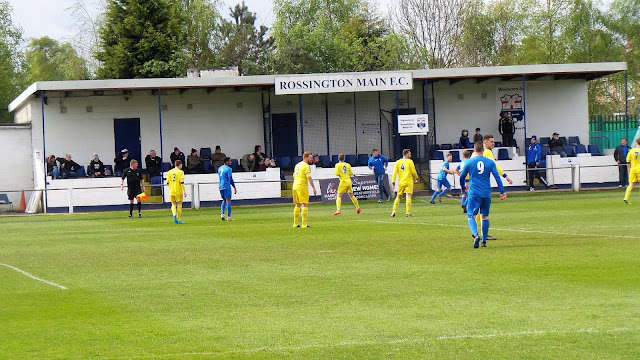 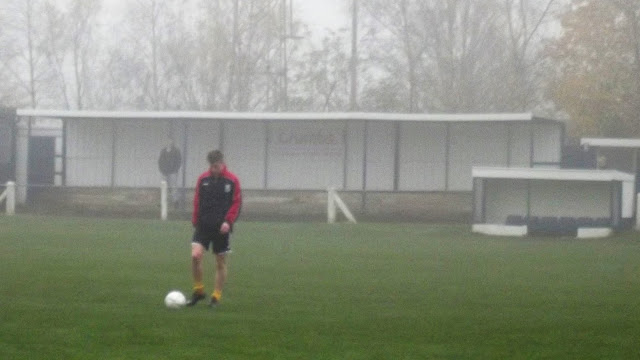 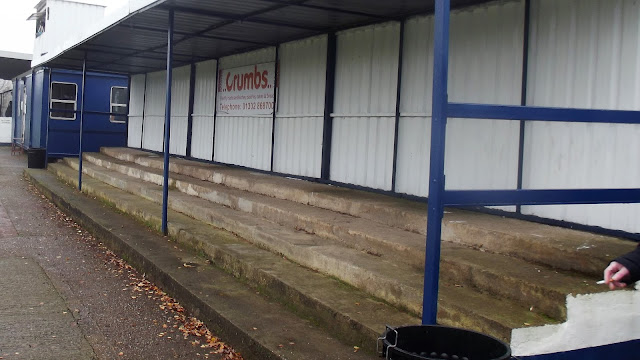 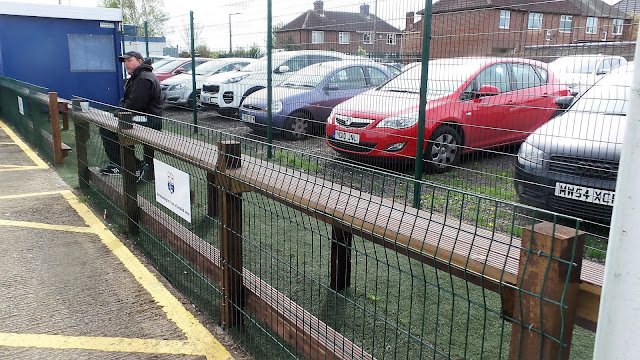 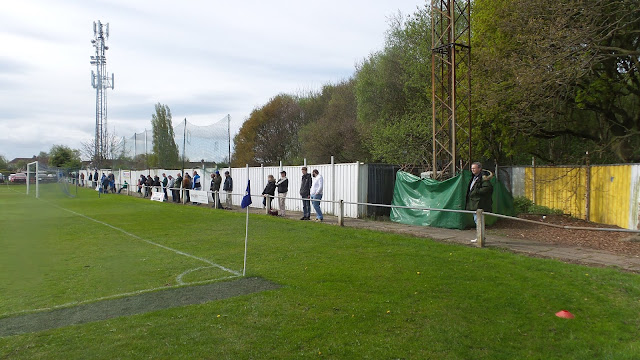