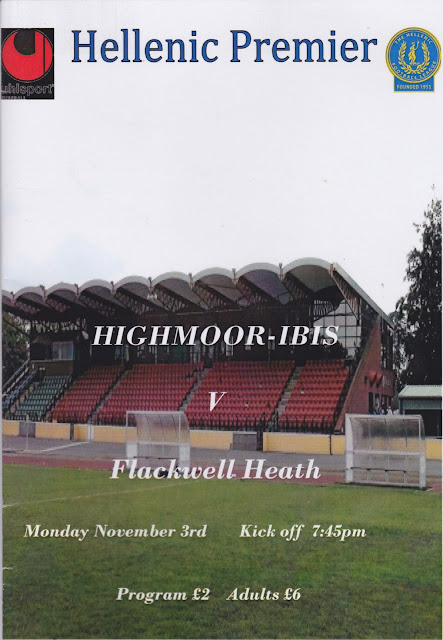 Highmoor IBIS were a merger of the former teams Highmoor and IBIS, who got together in 2001 Like their predecessors they played in the Reading League for the first 10 years of their history, joining the Hellenic League Division 1 East in 2011. They had a great first season, winning promotion via the runners up spot in their first season. They did OK in their first season in the Premier, finishing safely in 12th place. Next season they did even better, finishing a very credible 4th. This season they have continued their upward trend, by being top of the league at the time of the game.

In the FA Cup they had a decent debut season in 2013. Comfortable victories over Abingdon Town & Windsor set them up with a game against Chertsey Town in the 1st Qualifying Round but they lost 4-0. In the FA Vase they have reached the 1st Round on 2 occasions, the latest of which came just a couple of days ago when they lost down in Wiltshire.  Away from the league, their sole honour is the Reading Senior Cup, which they won in 2007. 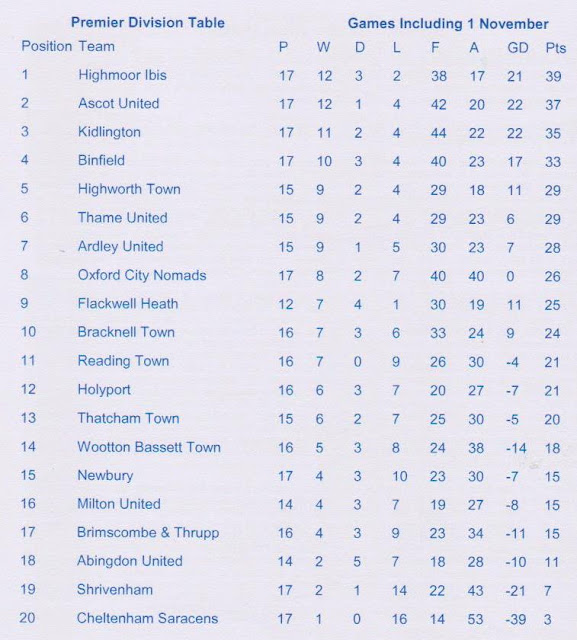 Being one of the closest grounds to me that I had not yet visited, Highmoor IBIS had been on my radar for a while. But it was one with an athletics track, and not very well rated by hoppers, so I resolved to save it for a Monday night when little else was on. I could have done it against Holyport last season and met fellow groundhopper Dan but I was tired and turned it down. I kind of wished I had gone now, but as soon as the fixture list came out I vowed to visit at the earliest possible opportunity. That turned out to be in early November against my local Hellenic Premier side Flackwell Heath. I'm not usually a fan of Monday night football as it's the only night that I get a good nights sleep due to work, but on this occasion, it was a local game. When I looked at the Non-League Paper it had them down as playing Melksham Town in an FA Vase replay which I was really happy about. Sadly it transpired that they had got it wrong, and Melksham had in fact won 2-1 in the first game. On the day I was quite busy. It was a hectic day at work, as has been the case lately, but I was unable to stay on past my normal time due to a dentist appointment. I then had to go and collect my phone from down town, leaving me with around an hour and a half to relax, before having dinner and leaving just after 6PM. I had a fairly stress free journey to the game. Apart from 10 minutes delay on the M4, it was as good as you could expect. I got to the ground at 7.10 and after parking up, went in paying £6 including programme. I then took some pictures before taking a place at the back of the stand for the game. 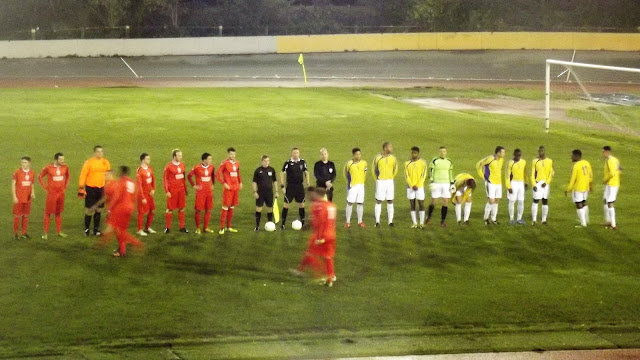 With both sides being on good form it looked like it was going to be a tight game, but it was quite open. Highmoor took the lead about 10 minutes in when a shot was rifled home but the visitors almost equalised straight after but it was deflected out for a corner. Flackwell kept pressing and were the better team. They got their reward just before half-time and it was a great equaliser, the ball being volleyed in from the edge of the area. Though the home side started the second half the brighter side, it was soon Flackwell who were controlling the game. They took the lead around 65 minutes with another good long-range shot and continued to apply pressure looking for a third.  They finally got it just before full time when an angled shot went past the keeper, maybe he could have narrowed the angle better. In any case, it was deserved and it put to bed the possibility of a Highmoor equaliser as they too had come close on the break. It had been a good game and I set my Sat Nav for home, hoping that there would be none of the annoyance of previous trips home, owing to numerous road closures. I was in luck and even though the game had a late finish of 21.50, I was back home in just over half an hour. As it was my day off the next day, I sat on my computer doing various things, before watching TV in bed.

PALMER PARK STADIUM is not the best place to watch football, being an athletics stadium. The stand is very good though, holding 720 and offering unrestricted views, And if you stand up at the back of the stand then the view is not as bad as you'd expect.

It's a shame there are no club signs to make the ground feel more homely. The tea bar served a range of hot drinks and snacks, and also doubled up as the pay box for entrance. I didn't see a bar, although there are a few places nearby. It's still worth a visit on a Monday night game though, as few other teams play on this day. 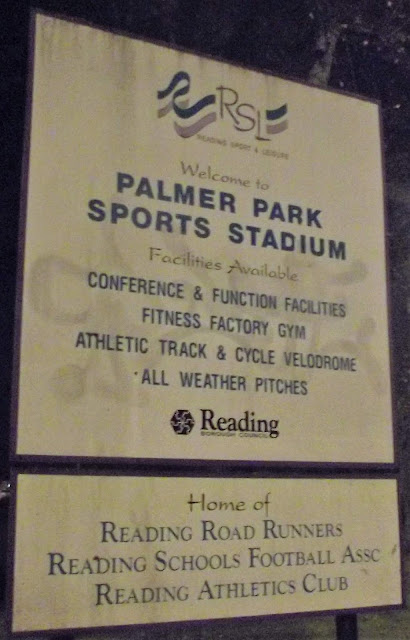 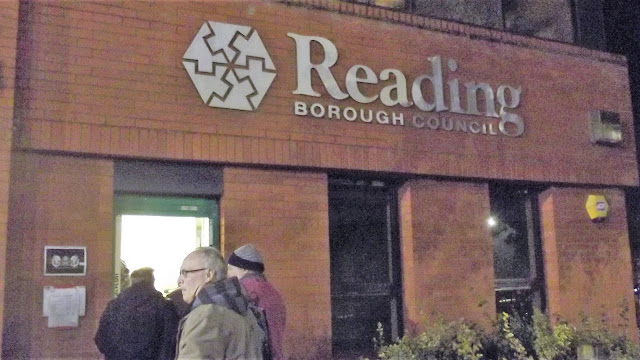 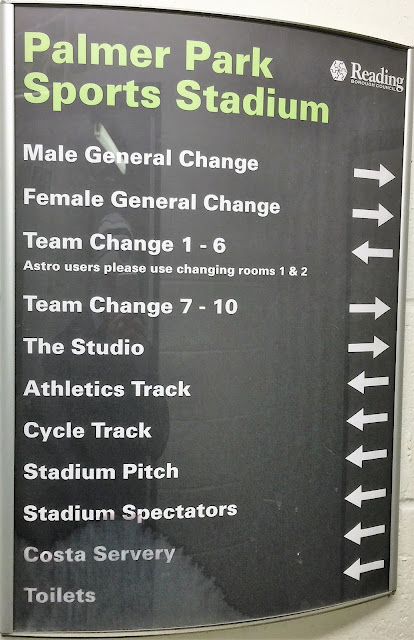 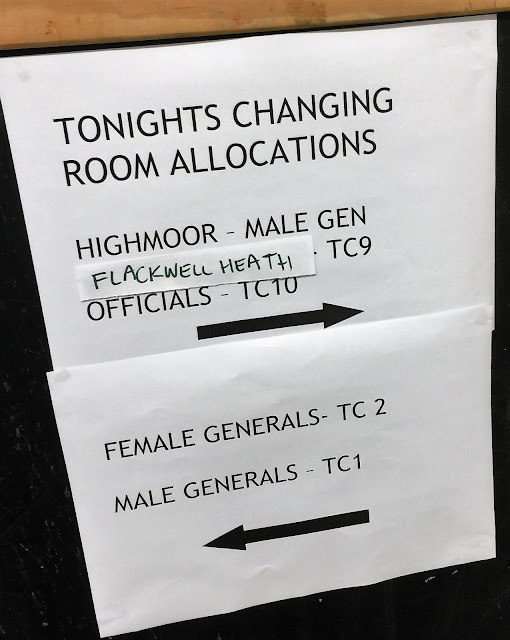 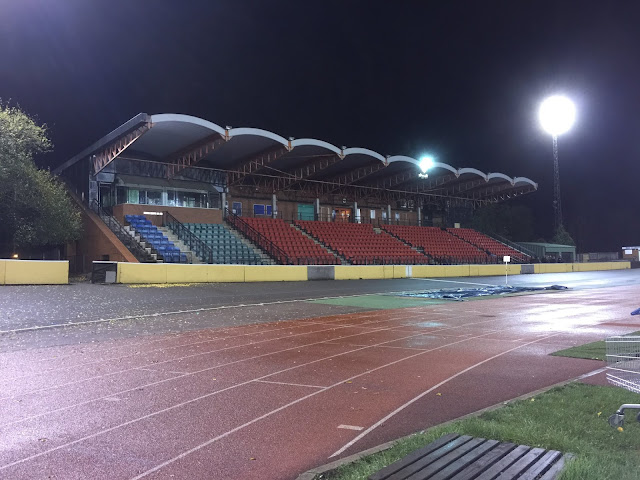 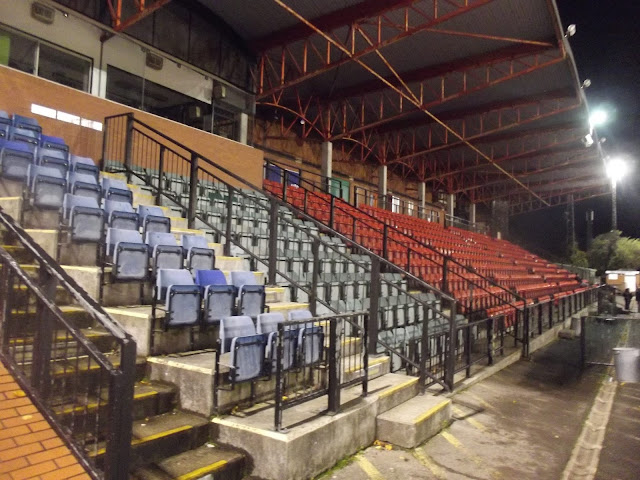 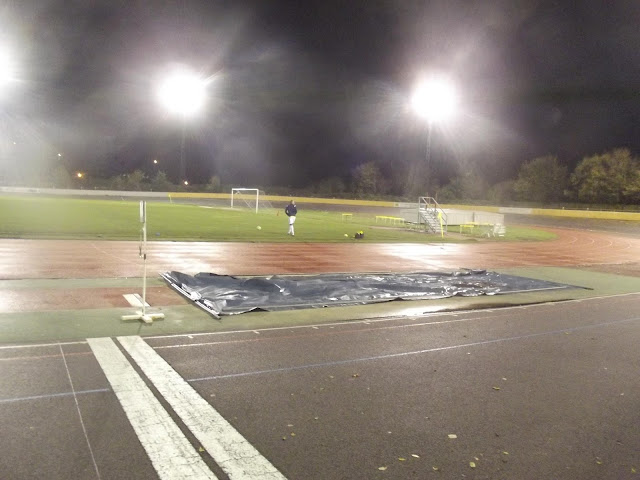 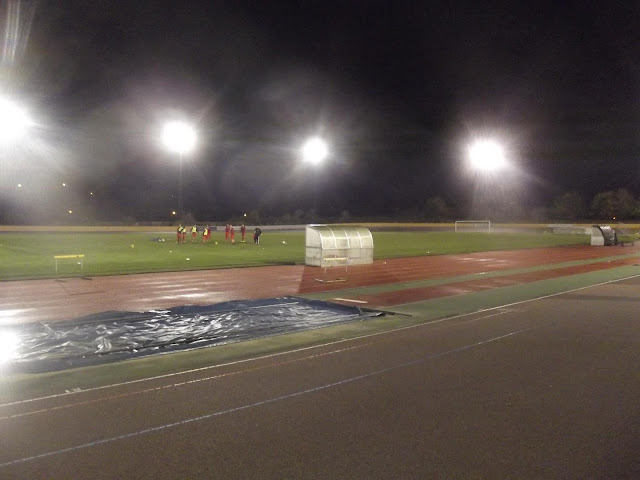