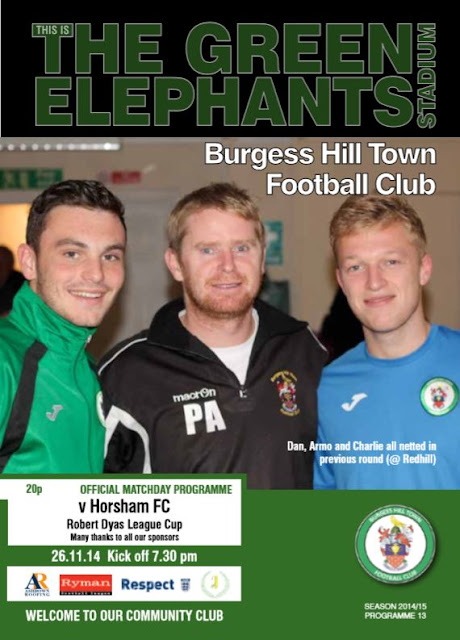 BURGESS HILL TOWN FC was formed in 1882 and were a founder member of the Sussex Country Football Association. They were originally called Burgess Hill FC and after several successful seasons joined the Sussex County League in the '50s. They merged with Worlds End FC in 1969 and at the start of the '70s moved to their current home at Leylands Park. From 1996 to 2003 they had a great period of success in the Sussex County League, never finishing outside of the top 2 of Division 1. Finally, in 2003 they were able to take promotion up to Step 4. For the 2003-04 season, they joined the Southern League - Eastern Division and finished an excellent 9th. They transferred to the Isthmian League the following season, and last season they finished in a best-ever placing of 6th in the Isthmian Division 1 South, just missing out on the playoffs. They were doing even better this season, being in 2nd place, 4 points behind leaders Faversham, but with 4 games in hand.

This big backlog of fixtures was due to them matching their best ever FA Cup run, reaching the 4th Qualifying Round, just as they had done in 1999 and 2008. This time out they beat Eastbourne Town, Croydon, Fleet Town and Conference South side who reside 2 levels above them. Sadly for the club, Conference side Dartford proved too strong a challenge as they won 3-1 in Kent, at Dartford's smart Princes Park Ground. The club had not had much success in the FA Trophy, only ever reaching the 2nd Round, and both of those occasions occurred in their first 2 seasons as a step 4 club. They got pretty close to a Wembley appearance in the FA Vase though - in 2002 they got all the way to the Quarter Final before losing to Tiptree United. Their record attendance came in April 2005 as over 2000 fans turned up to see them play AFC Wimbledon in a league game.

Originally I had no plans to go to a game on this day, as I would have had little sleep the night before and usually caught up a bit on Wednesday. But I had been looking to buy a TV for ages, a small one for next to my computer, but without much luck. I'd been trying on eBay and Gumtree for a while but without much luck. Maybe this was due to my ultra-low budget of £30 for a cheap brand or £40 for a branded one, but I promised myself that if I found one cheaper that was a fair way away, I would try and go to a football match at the same time and knock any saving off my desired price and put it towards my fuel costs for the trip. I saw a Celcius 19" LCD TV advertised for £25, managed to knock them down to £20 and arranged to pick it up tonight at 6PM. It was located in Knaphill in Surrey, so I looked for games around there. There wasn't much to be honest - the main 2 being Littlehampton Town v Abingdon United in the FA Vase and Burgess Hill Town v Horsham in the Isthmian League Cup. Weighing up the 2 options the former had the advantage of being the more attractive game in my mind - the 2 sides having drawn 4-4 in the original game up in Oxfordshire. While Burgess Hill had the advantage of being a quicker journey, both there from where I was buying the TV, and also home afterwards. My decision was sealed on the afternoon of the game, as Littlehampton had been called off. There were postponements galore due to the rain, my third choice at Fawley also biting the dust. I'd be sure to check that the game was on before I left Knaphill, that was for sure.

I'd had a restless nights sleep the night before, as I often do after footy. However, I felt fine in the morning. It was quite a busy day at work, and I didn't finish until 1.15. After getting some cash out and filling up with Diesel I made my way home and with only a few hours to spare, I had a bath and caught up on my blog as well as checking Facebook and other sites. I had a dinner of Chilli Con Carne before leaving home at 4.40. It was a pretty good journey for the rush hour, even the M25 was better than average, with delays caused by 3 separate people stopping in the road as opposed to the hard shoulder, so around 20 minutes delay all in all. I got to Knaphill bang on 6. After 5 minutes of exchanging TV and cash, I was on my way again and my sat nav took me cross country, possibly due to the rush hour traffic. It was very foggy and tight for time, but I managed to get to the ground and park up with 5 minutes to go before kick off. I paid £6 to get in, which was very sensible pricing. Sadly there were no programmes left, annoying, but understandable with a small scale cup game like this, where the print run is low. 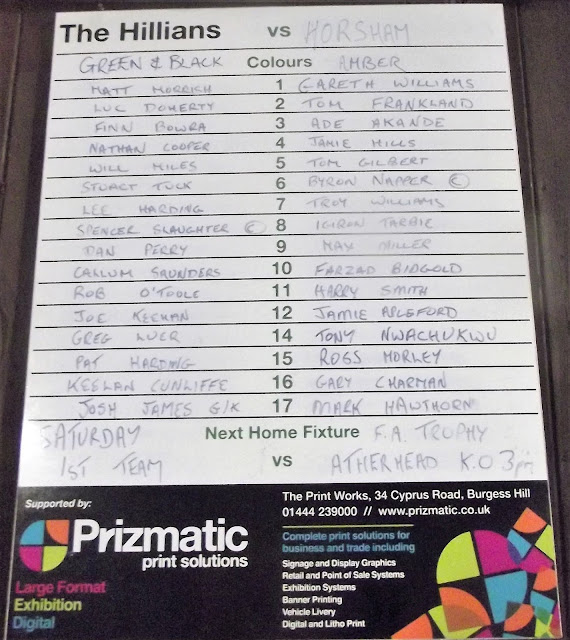 The rain was light at the start of the game but got a lot heavier as the game went on, so I took cover in the stand. The pitch held up very well considering the rain, and there were lots of call-offs not so far away. At halftime, I got myself a pint of Symonds and a very nice bacon cheeseburger. The difference in league positions really showed, even if both were not at full strength. Burgess Hill were making all the early running and they took the lead on 15 minutes when a ball across the box was not cut out and Callum Saunders was left with an easy tap-in. The lead was nearly doubled 7 minutes later but the Horsham keeper made a good save, tipping the shot round the post. Horsham had a couple of chances of their own and on 30 minutes it was all level, Max Miller's excellent low drive from 20 yards levelling things up. 2 goals in 2 minutes around the 37-minute mark put Burgess Hill well in control and they added a 5th in the second half to make it a highly convincing victory, with Dan Perry (2) and Luc Doherty getting on the scoresheet.

I made good time on the way home, getting back before 11. I tested the TV that I bought, it worked fine and I went to bed later pretty content. However, when I tested it the next day, it wouldn't switch on. Turning it off for a few hours did the trick but it seems a bit temperamental so I will have to keep an eye on it before deciding what to do. As I tidy up this blog in 2018, I can reveal that the TV went kaput a few weeks later, I cannot recall if I got my money back or not. But I did bag a brand new one for £60 which is still going strong to this day as my second monitor on my PC. The club also provided me with an electronic copy of the programme for me to look at, which was very decent of them. 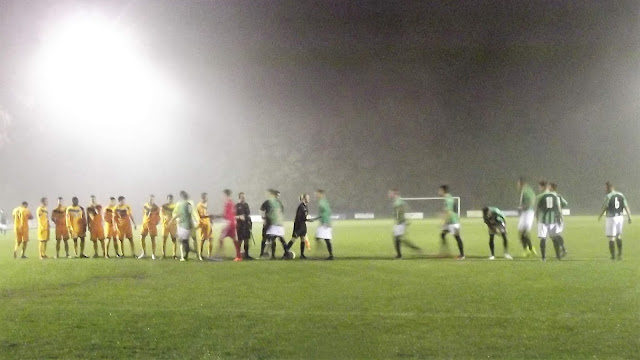 LEYLANDS PARK is a neat and well-kept ground. There is just the one stand with cover, a seated one that holds 307, while the rest of the ground is open. The bar is nice, with Sky TV on a big screen and real ale for those who like that sort of thing. There is no club shop, but the tea bar is pretty good with nice burgers and a good range of other stuff. The one daytime photo came from when I visited the ground on the way to another game to get pictures. 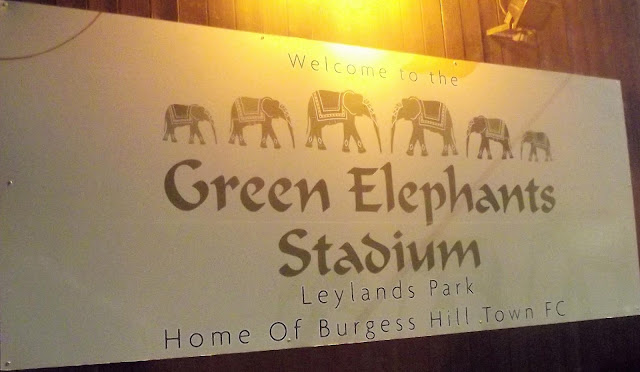 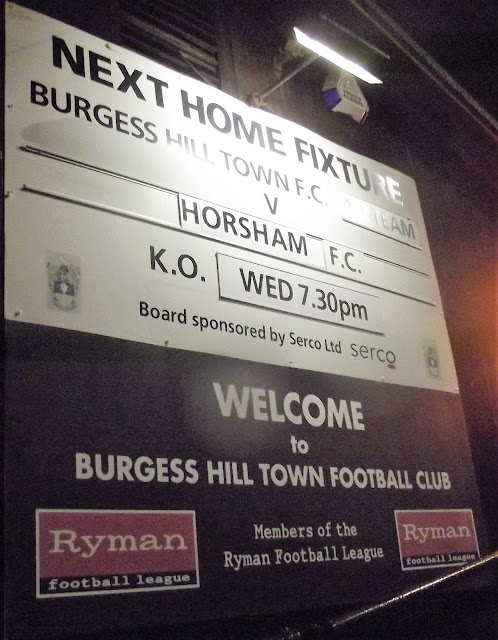 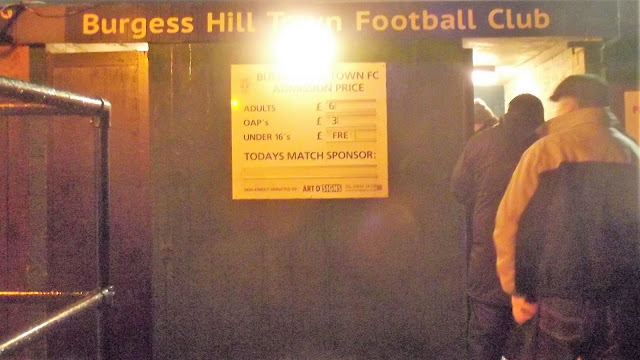 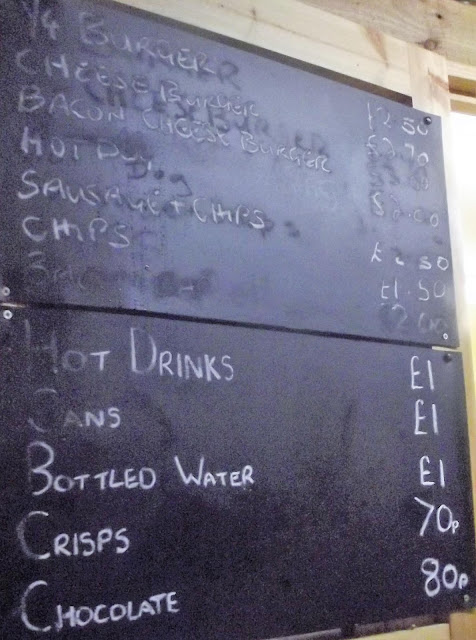 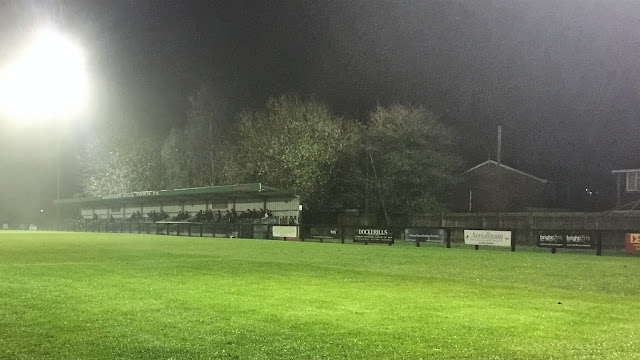 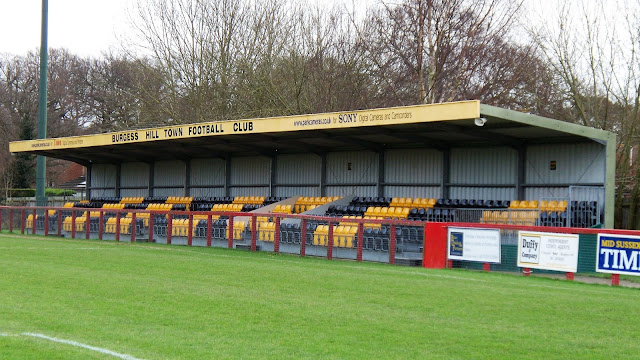 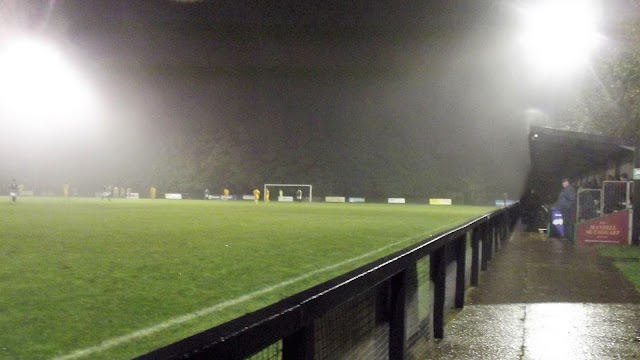 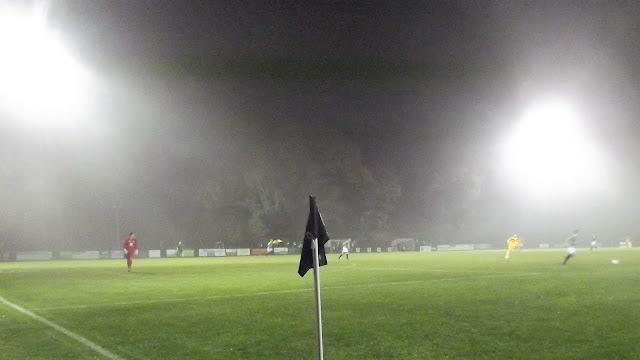 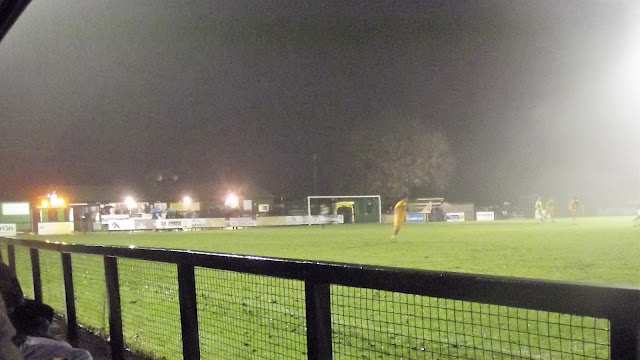