1:  Spurs can boast a large support from the Jewish community, going right back to their early days. This has led to the fans giving themselves the nickname of 'The Yids' - a cause of some controversy as the word is a derogatory term for a person of Jewish origin.

2:  Though racist sitcom star Alf Garnett was a fan of Spurs London rivals West Ham United, the actor who played him, Warren Mitchell, was a staunch Spurs fan. Other famous supporters of Tottenham Hotspur include radio host Danny Kelly, musicians Chas and Dave, actor Roger Lloyd Pack (Trigger from Only Fools & Horses) singers Adele and Jeff Beck and cricketer Mike Gatting. A slightly more dubious claim is that Reggae legend Bob Marley supported the team, though evidence of this is thin on the ground.

3:  Tottenham Hotspur first won the FA Cup in 1901, technically as a non-league club as members of the Southern League. They have gone on to win it 8 times, though not for 26 years, having last won it in 1991 when they defeated Nottingham Forest in the final. They are not a team that suffer a giant-killing easily, with the last result of note coming in 1988 when they lost 2-1 to Port Vale.

4:  The club have been in the football league since 1908 and have had unbroken membership of the top tier since 1950. They won the 1st Division in their debut season of 1950/51, repeating the trick 10 years later under legendary manager Bill Nicholson

5:  Spurs won the European Cup Winners Cup in 1963 and the UEFA Cup in 1972 and 1984. The furthest they have progressed in the so-called Champions League came in 2013 when they reached the Quarter Final before losing 5-0 on aggregate to Real Madrid 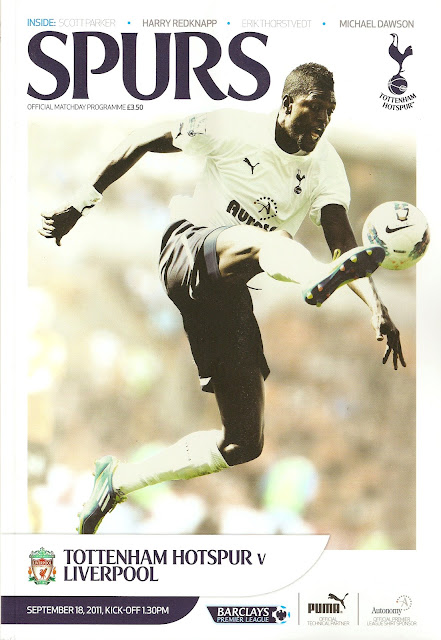 When the opportunity arose to visit Spurs for a fairly cheap price, I leapt at the chance. It was lucky that I was on my week off work, as I normally work all day Sunday, so for once things worked out well. My friend Michael is a big Spurs fan, and he and his mate are season ticket holders at White Hart Lane. As his mate was unable to attend, he put out a message on Facebook, asking if anyone would like to buy his ticket, at a price of £25. Considering that's what Hartlepool charge to sit in their away end, to watch third division football, I thought it was a bit of a bargain. 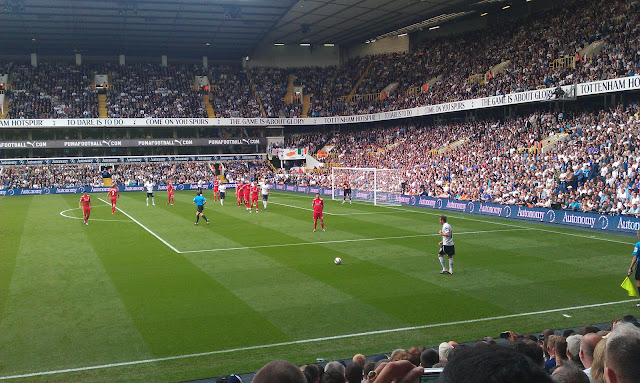 We had arranged to meet on the day near Aylesbury United's old Buckingham Road ground, which is now sadly derelict and vastly overgrown. Still, it was a convenient meeting point. Seeing as I arrived a few minutes early I took the chance to go in and survey the mess, it was quite hard to believe that the ground staged games less than 5 years ago given the state of it. The journey down was actually fairly painless, quite surprising given the magnitude of the game and the fact that we had to use the M25. We eventually got there around 11.30, having a fair bit of time to kill before the 13.30 kick off. So I went for a spot of lunch at a nearby Turkish takeway (which was very nice) and went for a couple of pints in the nearby Valentino's pub. 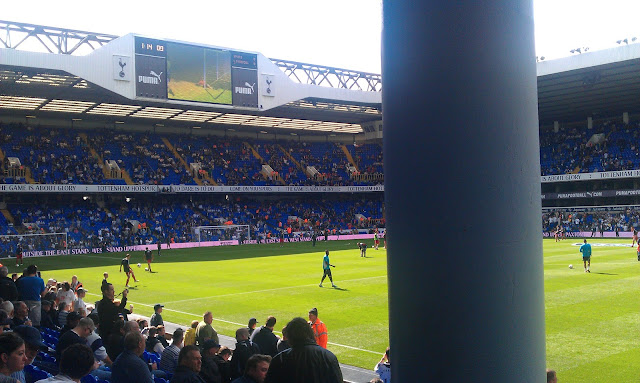 We got into the ground around 1ish and I was surprised at the vast amount of choice, food-wise. There was a pie shop, a hot dog shop and a curry type place, as well as the usual standard snack bar. They were handing out free samples of meatballs, which were actually pretty nice and a lot better than the rubbish you usually get in grounds. The seat I had was in the East Stand and had a restricted view, hence it being fairly cheap. You could actually see most of the pitch around the offending pole, although the seat could have done with being a bit higher up. One nice thing that I noted was that the whole stadium sang, not just selected parts. It was a fairly decent atmosphere all round. As for the game, it was fairly decent. Spurs coasted to a 4-0 victory with goals from Luca Modric (best goal of the day), Jermaine Defoe and 2 from Emmanuel Adebayor. Liverpool didn't help themselves by having Charlie Adam and Martin Skrtel sent off, but even with 11 men, they looked distinctly second best. Newcastle United must be rubbing their hands with glee at managing to con Liverpool out of £35 Million for Andy Carroll, judging by this performance. 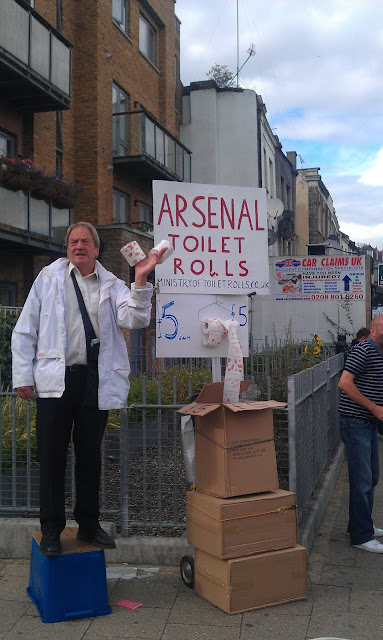 The journey home was not as smooth at getting there, taking twice the time due to heavy traffic getting out of the ground, but mainly due to the pesky M25 which was up to it's usual dirty tricks. I got back to Aylesbury just after 6 before driving home, having enjoyed my day out. 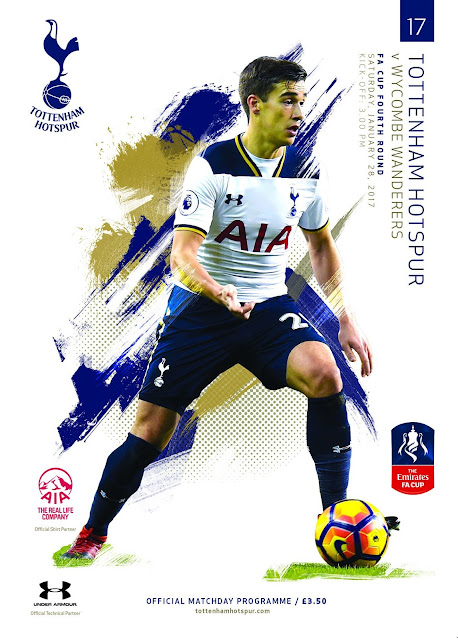 When Wycombe defeated Stourbridge in the 3rd Round, it meant we were going to participate in the 4th Round for the first time. I'd booked the Sunday off work in anticipation of us getting a televised tie, but as it turned out we were not being covered and the actual selection of games was not the most inspiring. I'd been hoping for an away day - preferably Middlesbrough Manchester United or Crystal Palace - all of which I felt required a revisit in my mind. Apart from that, I fancied one in London, so I could make it a nice day out on the train. I got my wish when we pulled out Spurs away, who had been a big club in the FA Cup in the past, and who were enjoying a resurgence under manager Mauricio Pochettino in the last couple of years. Being a Wycombe season ticket holder proved a big advantage as with tickets limited to just over 4,000, demand was always going to outstrip supply. I got mine without any fuss, and so I could relax while other fans sweated on getting to see the game 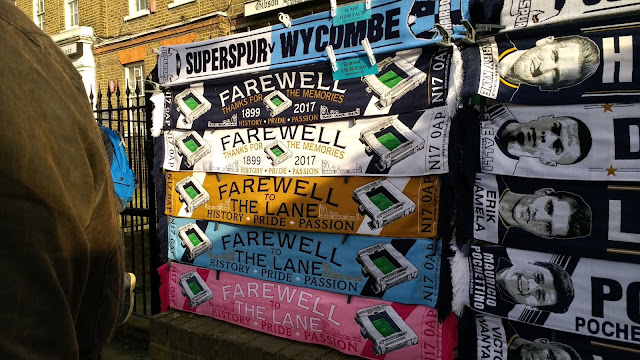 On the day of the game I woke just after 8am after a decent nights sleep. I got ready, leaving at 9.30 and making my way to Chalfont station where I parked up in a nearby side road. A lot of the Metropolitan line was out of commission due to engineering works, so I had to change at Harrow On The Hill onto a Chiltern Railways train. The whole service was a bit slow, and I didn't get to Borough Market until 11.45 after making the necessary changes. An hour was spent there, sampling a few ciders as well as having a Paella and a  crocodile burger for lunch. I left just before 1, taking the Northern Line to Moorgate and then walking to Liverpool Street. From there it was a train to White Hart Lane, with awful 'Superspur' half and half scarves on sale amongst lots of other stuff. I had a walk around before going in around 2.15. Pre-match was spent chilling and getting in the groove for the game, a match report of which is below. 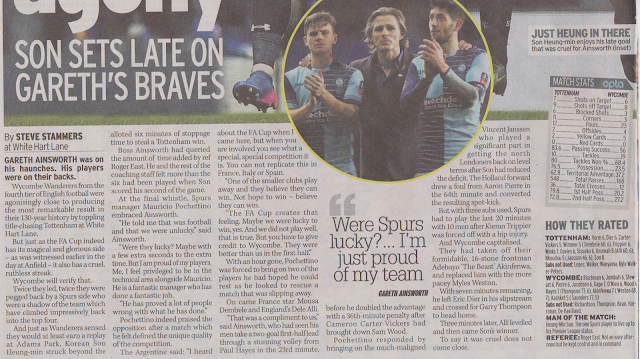 So what a hell of a day for Wycombe. We were dominant in the first half, but the second belonged to Spurs who got a last-minute winner when Wycombe were out on their feet due to injury time. The referee heavily favoured the big team, or so it felt. In any case I was proud of my team. It was a 15-minute walk to the station, then a long queue and wait for a train to Liverpool Street. I got the train from there to Baker Street, then had to walk for 10 minutes to London Marylebone. A nice little bonus on this stroll came via the off license Oddbins where I picked up a few decent bottles of cider, the vast majority of which I'd never had before. Prices were reasonable too, especially for London. My phone battery was getting low by now, and ideally I'd have bought a magazine. But with my train back to Chalfont a couple of minutes away, I raced to get that. It was busy, what with the closure of the Metropolitan Line and I joined a few proud Wycombe fans who were on their way home. I got back to Chalfont at 7.45 and did my usual trick of calling in at The Craft Beer Shop to get a couple of pints of cider to take home - in this case Lilley's Gladiator at a massive 8.5%. Getting back around 8.15, I spent the evening having a few drinks, as well as looking online and watching Match Of The Day, before going to bed around midnight. 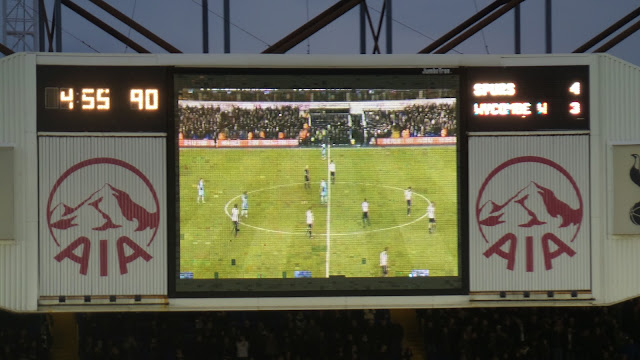 WHITE HART LANE was not as big as I had expected, looking pretty average compared to other Premiership grounds I have been to.  As well as the restricted view, the leg room was pretty tight being a stand built on a former terrace. I can see why Spurs want to move. Though considering it is an old ground, they have made a fairly smart job of enclosing it all in and creating a sort of bowl, in keeping with modern stadiums. The best view I'd imagine would come from the upper tier, ironically, away fans are given some of the better seats. On my second visit, I was indeed a visiting supporter and views and leg room were excellent. Food was a bit limited in the away end, but there's a whole load of choice in the area around the ground. Pub wise I saw nothing special, so if you like something decent, you'll be better off finding your tipple of choice in London, and travelling from there 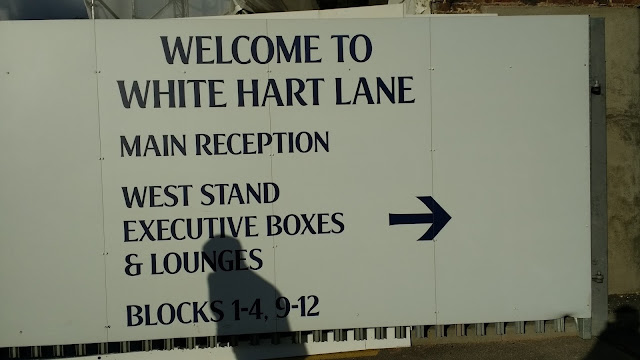 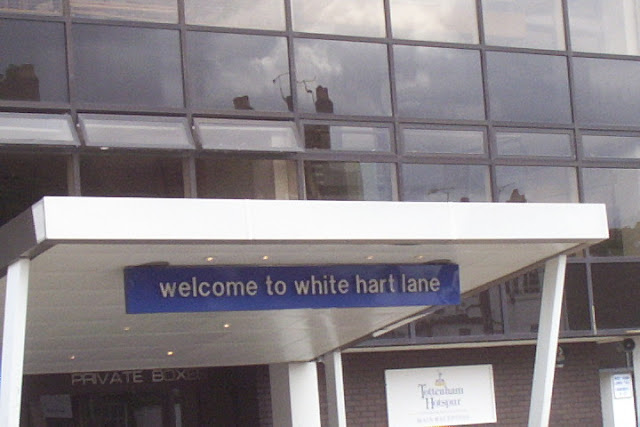 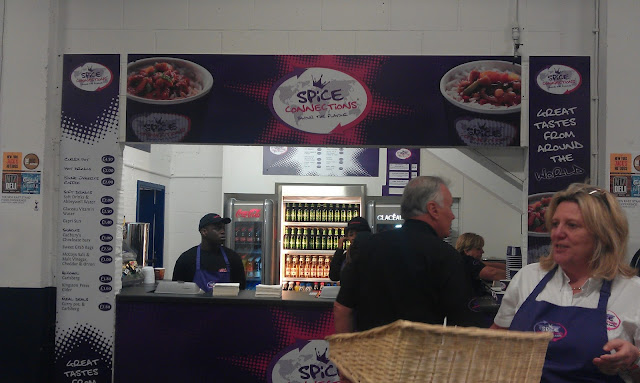 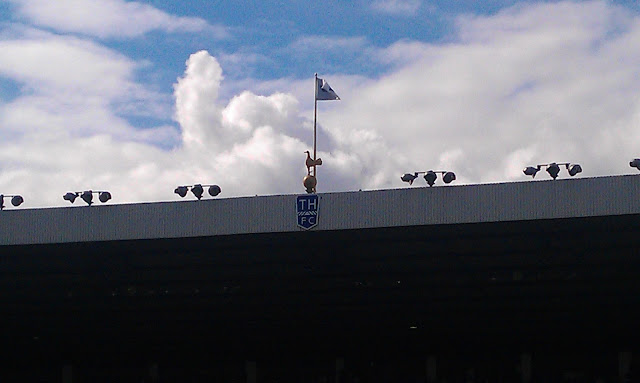 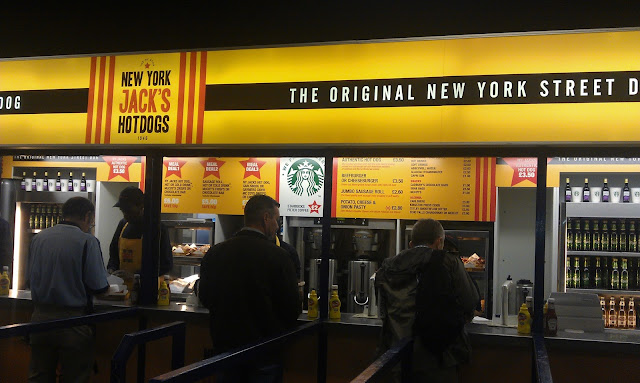 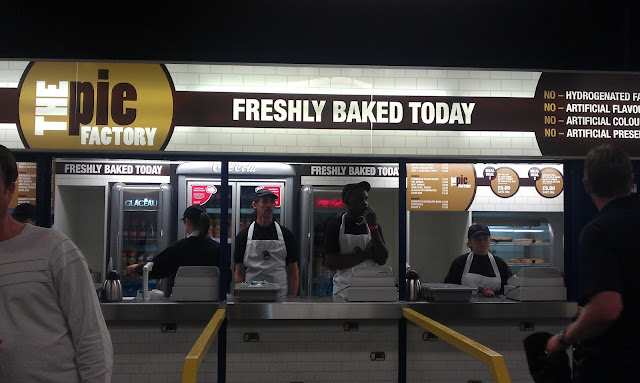 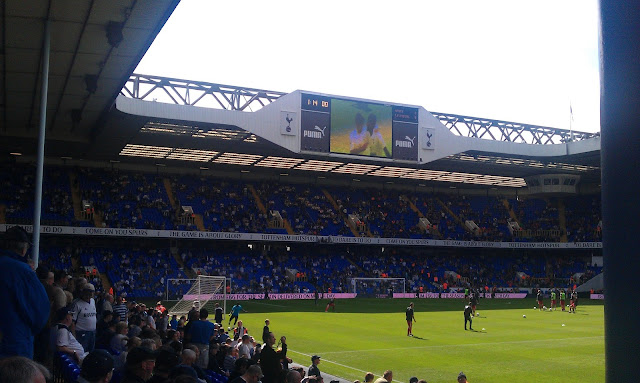 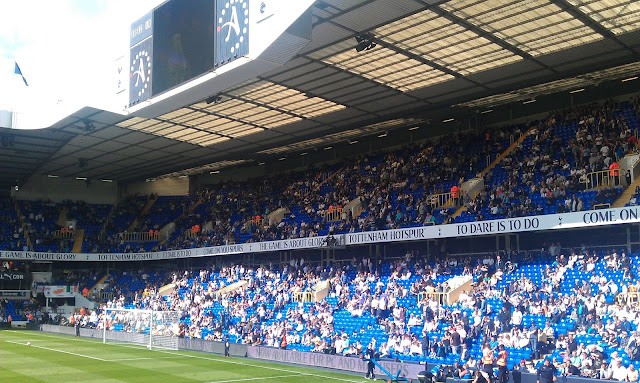 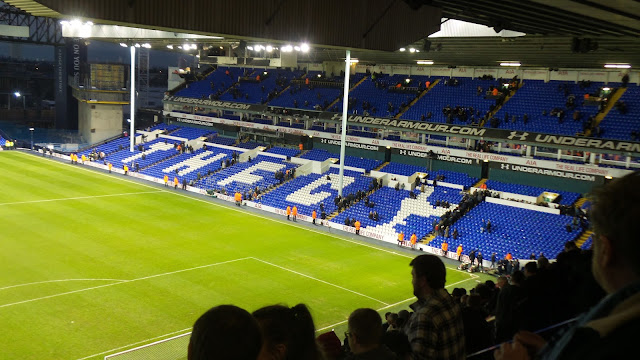 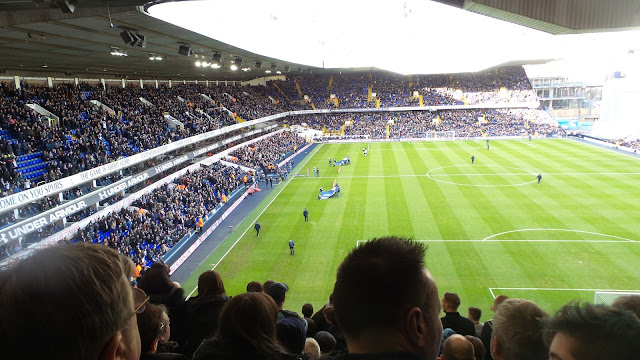 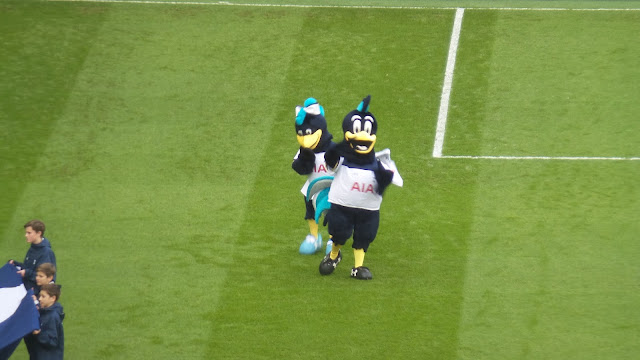